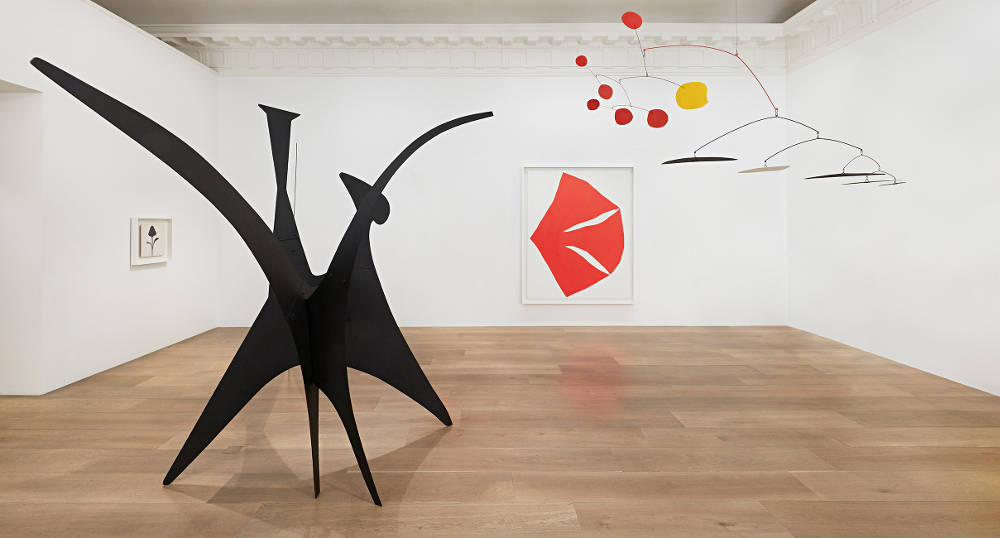 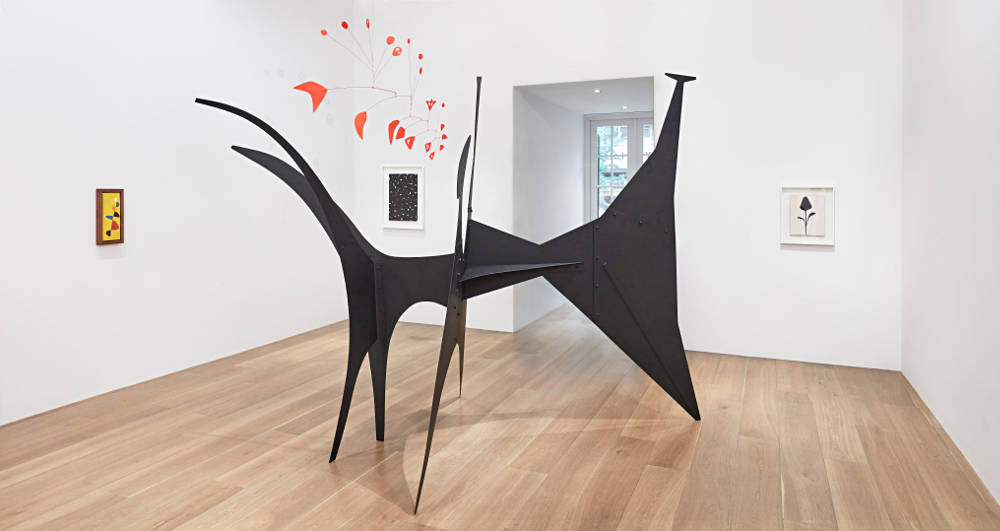 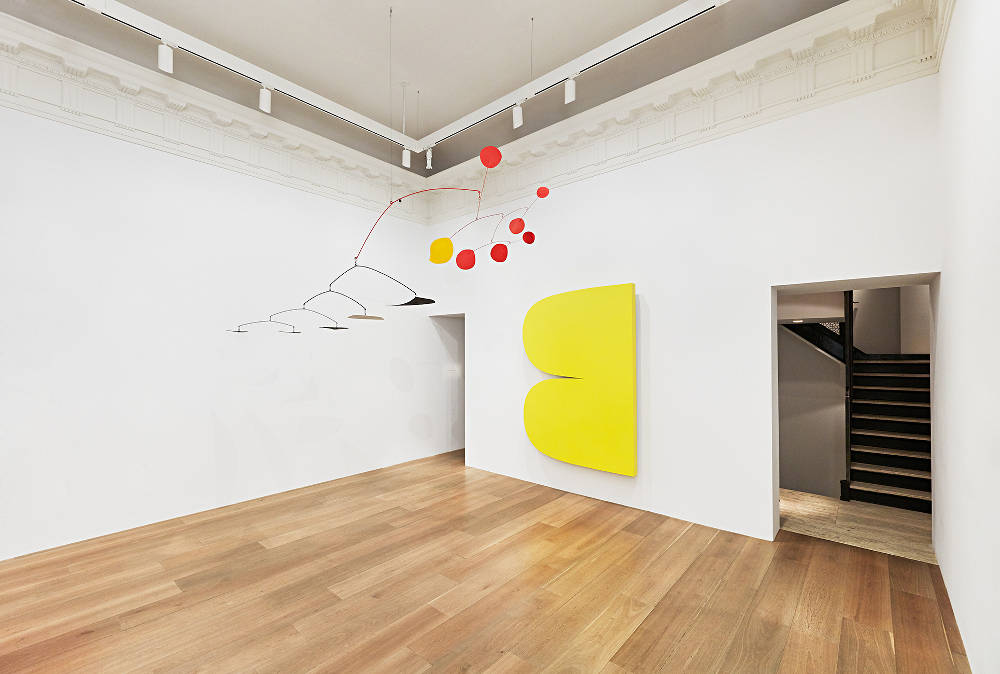 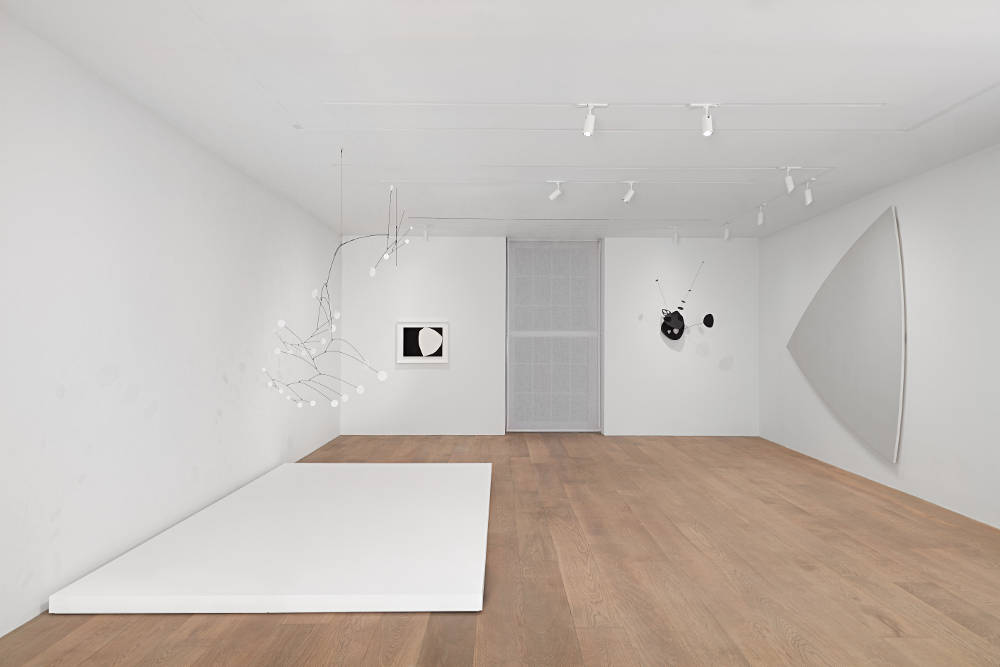 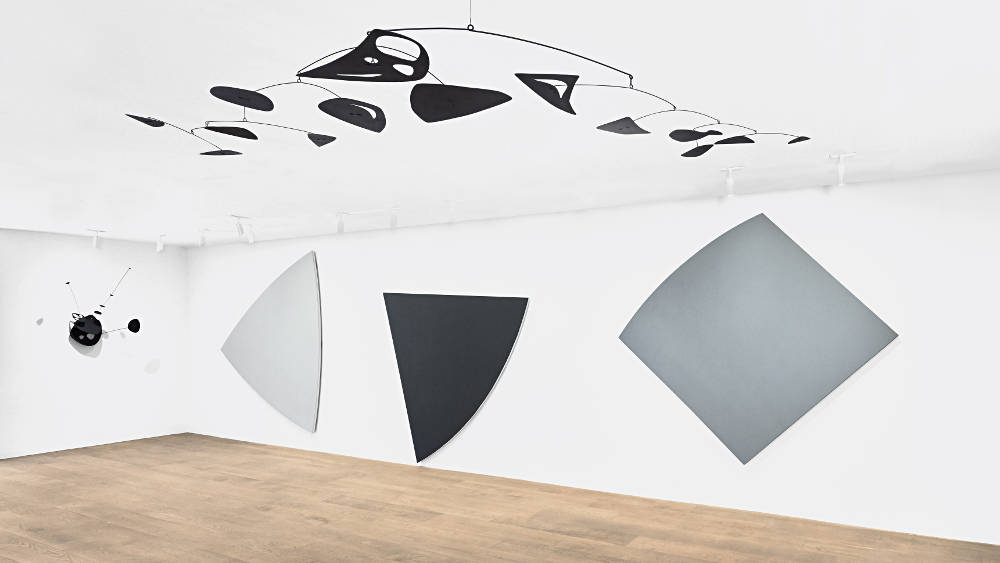 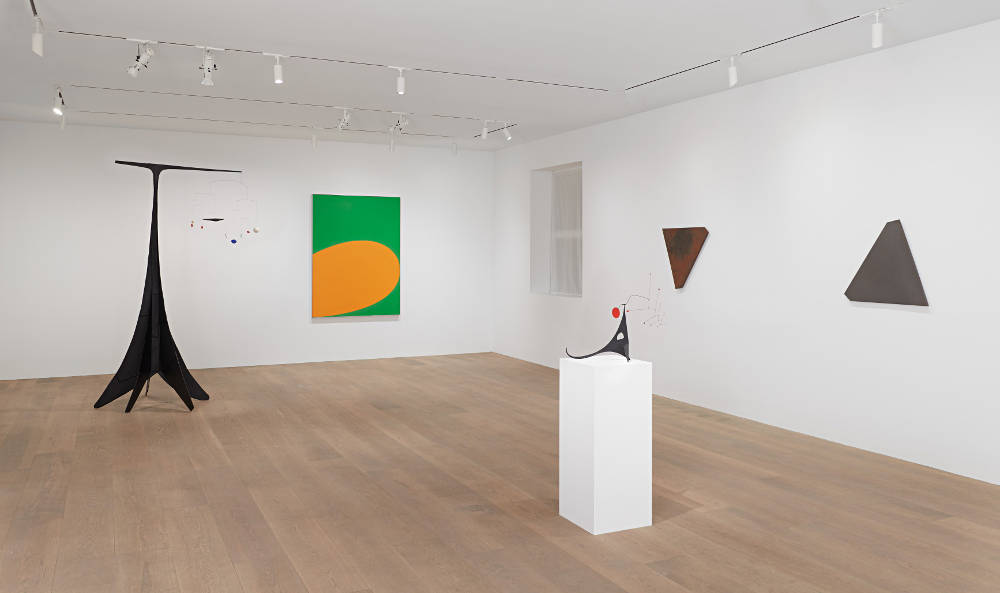 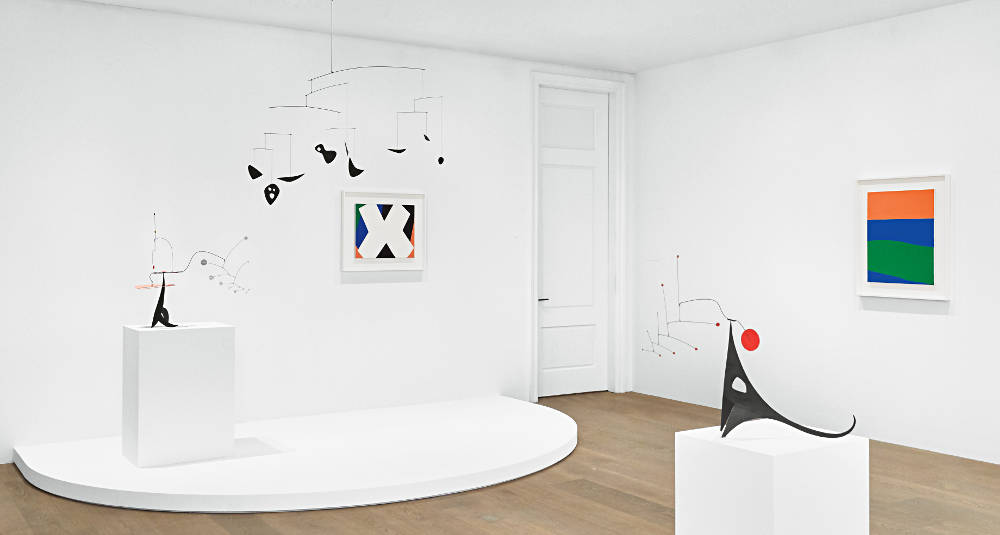 The exhibition comprises approximately three dozen paintings and sculptures made over a fifty-year period, including Calder’s mobile Red Maze III (1954) and Black Beast (1940), and Kelly’s painting Red White (1962) and Three Gray Panels (1987). Presented in collaboration with the Calder Foundation and Ellsworth Kelly Studio, the exhibition is a discourse between generations that celebrates the artists’ friendship and their extraordinary experiences as Americans who were shaped by significant periods of time spent living in Paris.

Over the three floors of Lévy Gorvy’s building on the Upper East Side of Manhattan, a dynamic exchange between two virtuosic talents takes shape. Animated by the tension between figuration and abstraction, the works on view suggest intriguing intersections, including the striking repartee between two- and three-dimensionality (which, in Calder’s case, extends to four-dimensionality) that is a notable element of each artist’s oeuvre. In their works, the boundary between positive and negative space—object and shadow—becomes unclear, destabilizing our grasp of figure and ground.

This effect is heightened by the artists’ shared preference for a graphic palette dominated by black and white, and high-chroma colors. The aesthetic dialogue between Calder and Kelly extends through an attendant display of art directly exchanged as gestures of friendship and mutual artistic rapport. Letters and other documents illuminate a relationship where creativity and high personal regard were beautifully intertwined.

The exhibition will remain on view through January 9. A fully illustrated catalogue will follow the exhibition, featuring texts by Calder biographer Jed Perl, curator Veronica Roberts, and philosopher Robert Hopkins, while Simon Perchik, Forrest Gander, and Dan Chiasson will contribute poems inspired by the artists.

As part of the gallery’s ongoing dedication to cultural programming, composer Lea Bertucci has been commissioned to create an immersive sound piece, utilizing the natural acoustics and highly resonant spaces of our landmark building for the TILT Brass ensemble. Drawing on Calder’s palpable transformation of space and Kelly’s distillation of natural forms into their purest abstraction, the musicians will be spread across three floors on the evening of Wednesday, November 28, passing tones up and down the stairs and throughout the galleries in quiet meditation and swells of dynamic reverberation, to be experienced by the audience as they view the floors of the exhibition.

About the Exhibition
Both Calder and Kelly lived in Paris during important periods of their artistic development. Calder’s so-called “Paris years” took place between 1926–33, a time during which he expanded upon his practice of wire sculpture, or “drawing in space,” and invented the mobile. In the years following World War II, he would return to France often, accompanied by his wife, Louisa. Kelly, who had first travelled to France as part of his military service during the war, returned after the Armistice to study at the Ecole des Beaux-Arts. It was during his time in Paris that the young Kelly met Calder, who was by then a figure of international standing.

Although they met in Paris, it was only after Kelly returned to the United States in 1954 that their friendship began to thrive. In letters, postcards, and other personal ephemera held by the artists’ estates, the friendship between them is revealed as sociable and warm, highlighted by the Calders’ invitations to Kelly to join them for weekend dinner parties at their Roxbury, CT, home, and Kelly’s evident enthusiasm for sharing their company. From an early point in their friendship, Calder also offered professional support to Kelly, even once helping to pay his studio rent. Calder wrote to James Johnson Sweeney, then-Director of the Solomon R. Guggenheim Museum, as well as Alfred Barr, then-Director of The Museum of Modern Art, encouraging them to arrange a studio visit with Kelly, who had recently returned to New York City. Barr sent curator Dorothy Miller in his stead, and the result was Kelly’s inclusion in the museum’s important 1959 survey Sixteen Americans.

Calder and Kelly also showed their appreciation for one another’s friendship through gifts of art, some of which are included in this exhibition. Kelly made several trips from his home in lower Manhattan to visit the Calders in Roxbury, on one occasion bringing with him an artwork in appreciation of the couple’s generosity: Charmettes I (1956) is a black and white painting that forms an abstract depiction of the way sunlight projects dappled shadows through the plane trees in the south of France. Calder also gave Kelly several gifts, including a stabile with a cap-and-stem form. Calder biographer Jed Perl notes that this work was originally made as a maquette for a monumental sculpture Calder had proposed for Philadelphia’s Penn Center, and that the gift was given right before Kelly’s own sculpture was installed in Penn Center. Another work on view that was given by Calder to Kelly is a small painting dated circa 1945, that provides a rare opportunity to see the legendary sculptor manifest his ideas in two dimensions.

Despite the magnetic pull of the New York art world, Kelly and Calder each eventually chose to reside outside of the city—Calder living between Connecticut and rural France, and Kelly moving to Spencertown, NY. The arm’s length relationship the artists had with New York City and their strong connections to Europe saw each develop a variety of abstraction distinct from the dominant modes of Abstract Expressionism in America (informed by Calder’s own gestural aesthetic) and Art Informel in Europe. This is evident in each man’s profound contributions to the development of abstraction, but also to a depth of personal understanding and admiration for one another that is remarkable in the story of American Modernism.

Alexander Calder
Born in 1898 to artist parents, Alexander Calder spent much of his childhood in Pasadena, CA, a city that at that time enjoyed a flourishing Arts and Crafts Movement. In 1926, following a period of study at the Art Students League in New York, Calder moved to Paris. There he continued to make sculptures out of wire and found materials, and became a pioneering figure of the Parisian avant- garde. It was during this period of time in Paris that Calder invented the iconic abstract, kinetic sculptures so strongly associated with his legacy, which were given the name of “mobiles” by Marcel Duchamp. Though the first mobiles were motorized, Calder soon turned away from the use of mechanics to create works that instead responded to air currents, humidity and human interaction. Other stationary, abstract sculptures Calder made were dubbed “stabiles” by the painter and poet Jean Arp. Commissions for the Spanish pavilion at the 1937 World’s Fair and for the stairwell of the newly-built The Museum of Modern Art in New York reflected the artist’s growing reputation. When MoMA made Calder the youngest ever artist to receive a full-career survey in 1943, his role in the canon of American modernism was secured.

Calder married Louisa James in 1931, and the couple spent the years of the Second World War in America, living in Roxbury, CT. With the war’s end, Calder and his wife resumed travel to Europe, and France in particular. As the United States’ representative at the Venice Biennale in 1952, Calder won the Grand Prize for sculpture. With his career flourishing, his practice expanded into monumental outdoor works, many of which, including Trois disques, commissioned for the 1967 International and Universal Exposition in Montreal, Canada, were fabricated at an industrial ironworks in Tours, near the artist’s home and studio in France’s Indre Valley. Further significant retrospectives of Calder’s work were held during his lifetime at the Solomon R. Guggenheim Museum, New York (1964), the Fondation Maeght, Saint-Paul-de-Vence, France (1969), and at the Whitney Museum of American Art, New York (1976). Alexander Calder died in New York in 1976.

Ellsworth Kelly
Born in 1923 in Newburgh, NY, Ellsworth Kelly studied at the Pratt Institute in Brooklyn, NY. After his studies, Kelly served in the military from 1943 to 1945, participating in the Allies’ 1944 landing in Normandy. Kelly returned to France to study art at the Ecole des Beaux-Arts Paris in 1949, during which time he was introduced to the work of the Surrealists and Neo-Plasticists, influences that led him to experiment with automatic drawing and geometric abstraction in his own practice. Kelly later said that upon his arrival in Paris, he “realized that figurative painting and also abstract painting … as I had known it in the 20th century no longer interested me as a solution to my own problems.” After becoming acquainted with Jean Arp in 1950, Kelly began to incorporate randomly arranged wooden shapes and collage into his practice. By the time Kelly returned to the United States in 1954, he had had his first solo exhibition, held at the Galerie Arnaud Lefebvre in Paris in 1951. Kelly had also become acquainted with a veritable Who’s Who of twentieth-century modernism, including Constantin Brancusi, Alexander Calder, and Francis Picabia.

From his studio in lower Manhattan, Kelly continued to push his exploration of form, primarily through painting. The artist’s first solo show in the United States was held at the Betty Parsons Gallery in Manhattan in 1956 and resulted in increased recognition for the young artist. Only three years later, The Museum of Modern Art’s influential curator Dorothy Miller included him in the seminal 1959 exhibition, Sixteen Americans. Noted critic Clement Greenberg included Kelly’s work in his exhibition Post-Painterly Abstraction at the Los Angeles County Museum of Art in 1964. As recognition of the contribution Kelly was making to abstraction grew, he resumed a sculptural practice as well. The first retrospective of Kelly’s work was held at MoMA in 1973, and several years later his work was included in the major sculpture fair held every five years in Kassel, Germany, Documenta. Honored with numerous public commissions, including a mural for UNESCO in Paris in 1969, and a 1993 memorial commissioned by the United States Holocaust Memorial Museum in Washington, DC, Kelly’s legacy is foremost among the masters of American abstraction. A travelling career retrospective was organized by the Solomon R. Guggenheim Museum in 1996, with further exhibitions of Kelly’s work mounted at the Metropolitan Museum of Art (1998), the San Francisco Museum of Modern Art (2002), The Museum of Modern Art (2013) and in Austin, TX (2018) in conjunction with the debut of Austin. Kelly’s chapel commission for the University of Texas Blanton Museum of Art. Ellsworth Kelly died in Spencertown, NY, in 2015.

Lea Bertucci & TILT Brass
Lea Bertucci is an American composer and performer acclaimed for her use of spatialized sound. In addition to her instrumental practice, her deeply experimental work often incorporates multi-channel speaker arrays, electroacoustic feedback, extended instrumental technique, and tape collage. She has been a 2015 ISSUE Project Room Artist-in-Residence, a 2016 MacDowell Fellow, and was commissioned by artist Josiah McElhenny for his Madison Square Park installation ‘Prismatic Park’ in 2017. Founded in 2003, TILT Brass is a Brooklyn-based organization dedicated to creating new content and contexts for contemporary brass music.