Simon Lee Gallery presents Sky, Rocks & Digits, a joint exhibition of works by Berlin-based artists Angela Bulloch and Josephine Pryde. Concerned with the interplay between bodies and technology, both artists explore the historic and ongoing significance of technological mediation and what that produces, enables or prohibits. 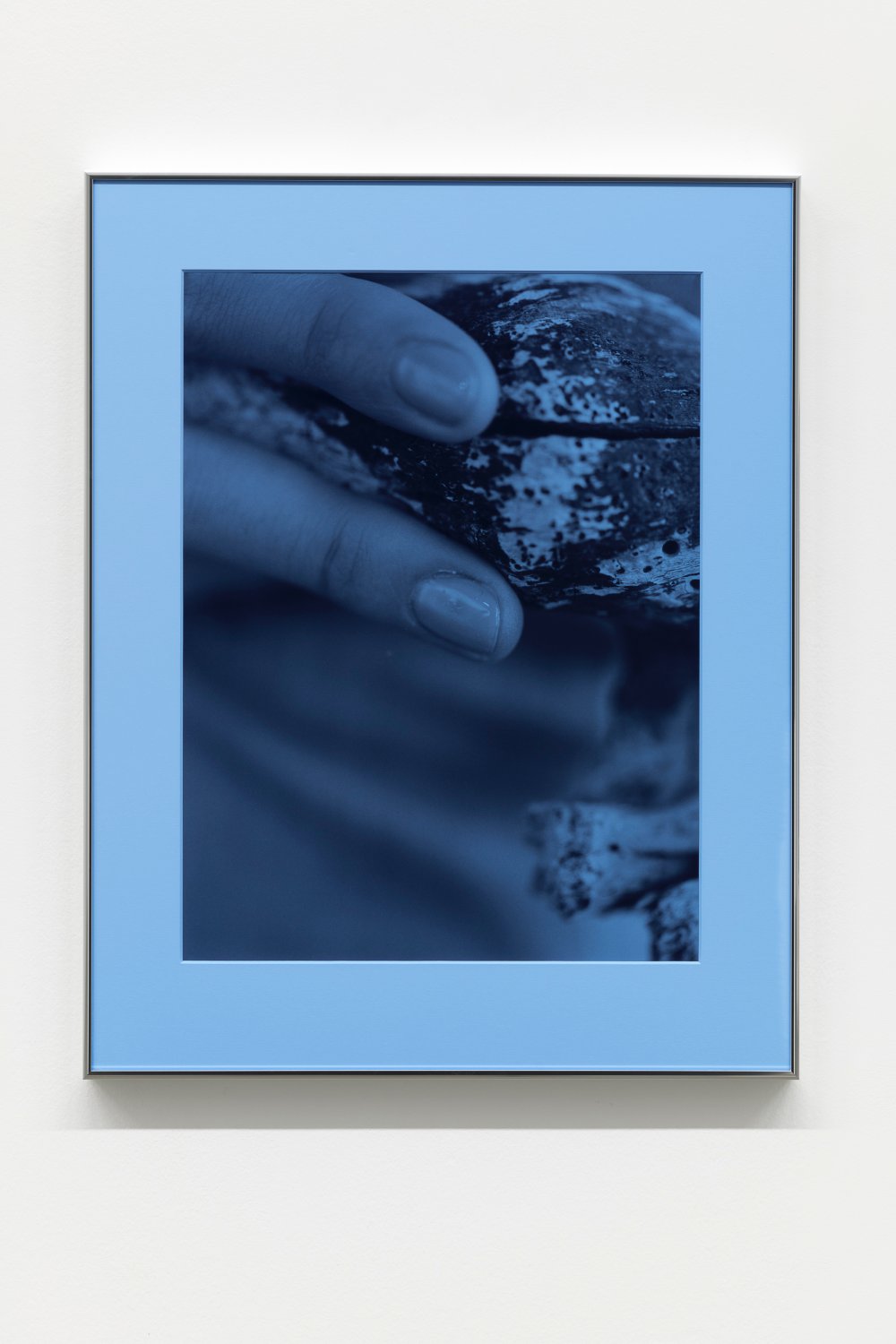 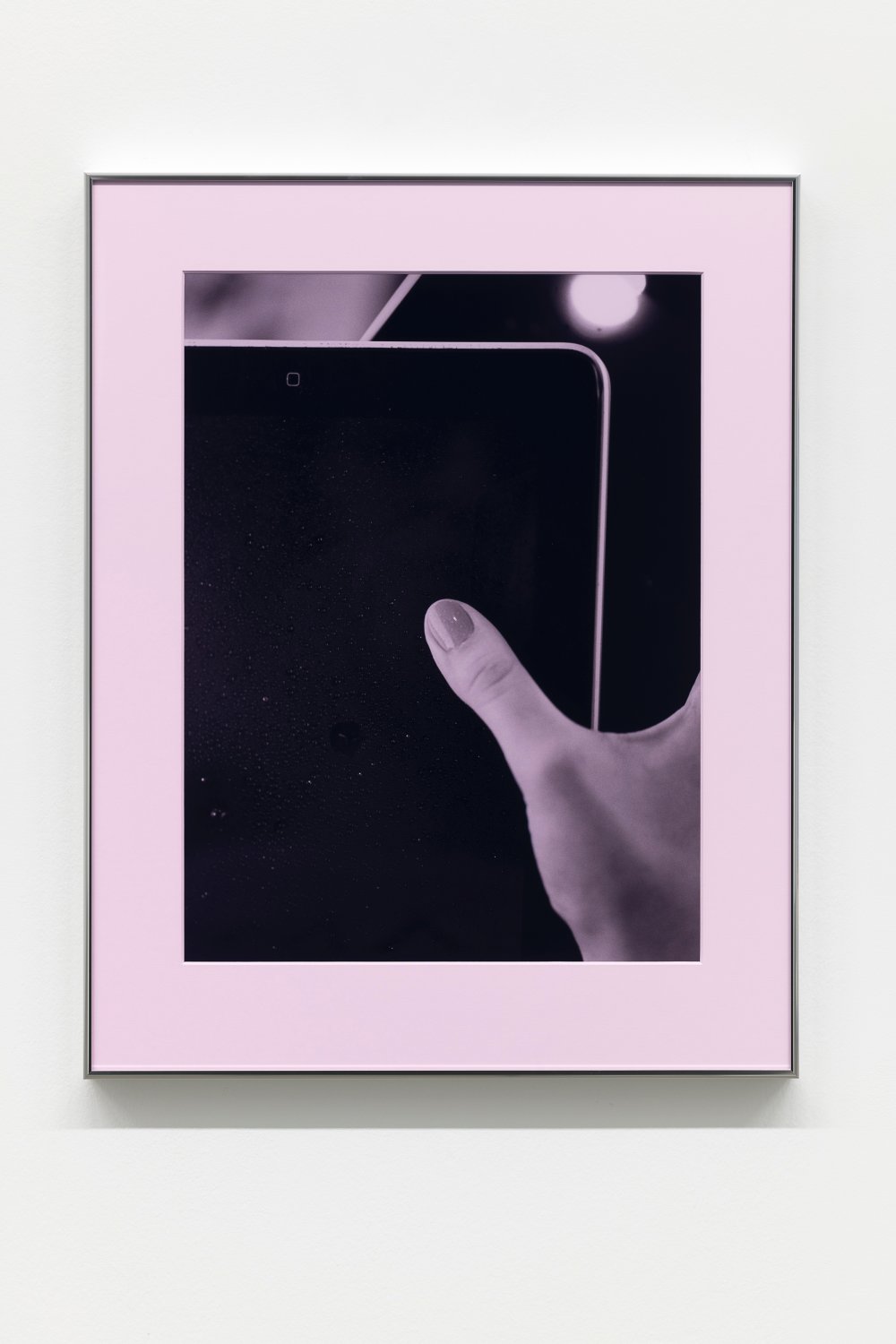 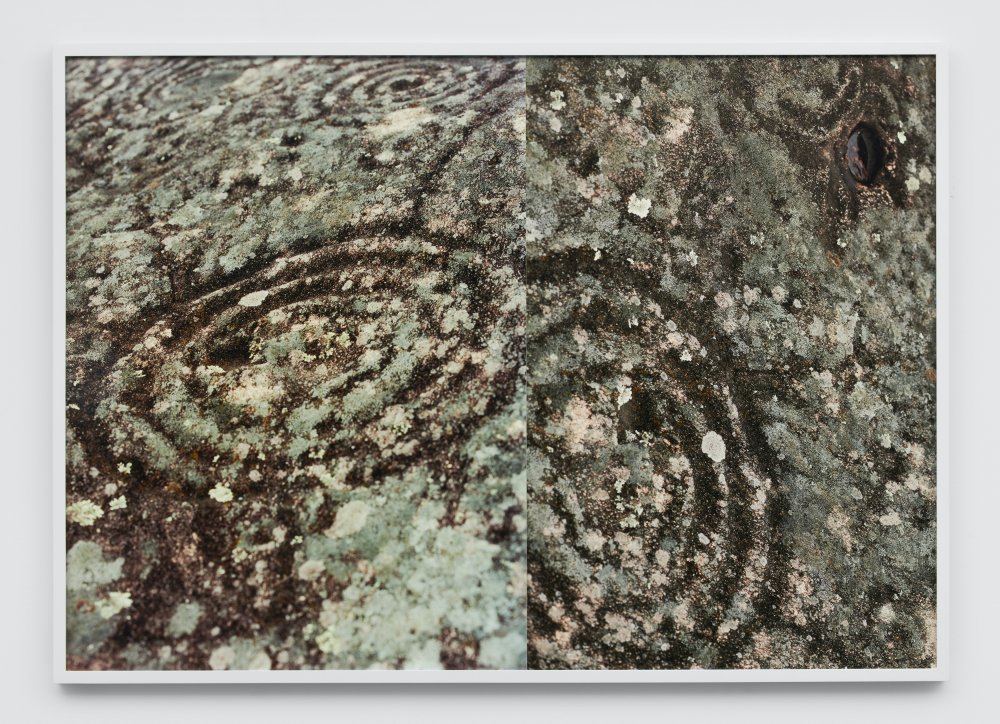 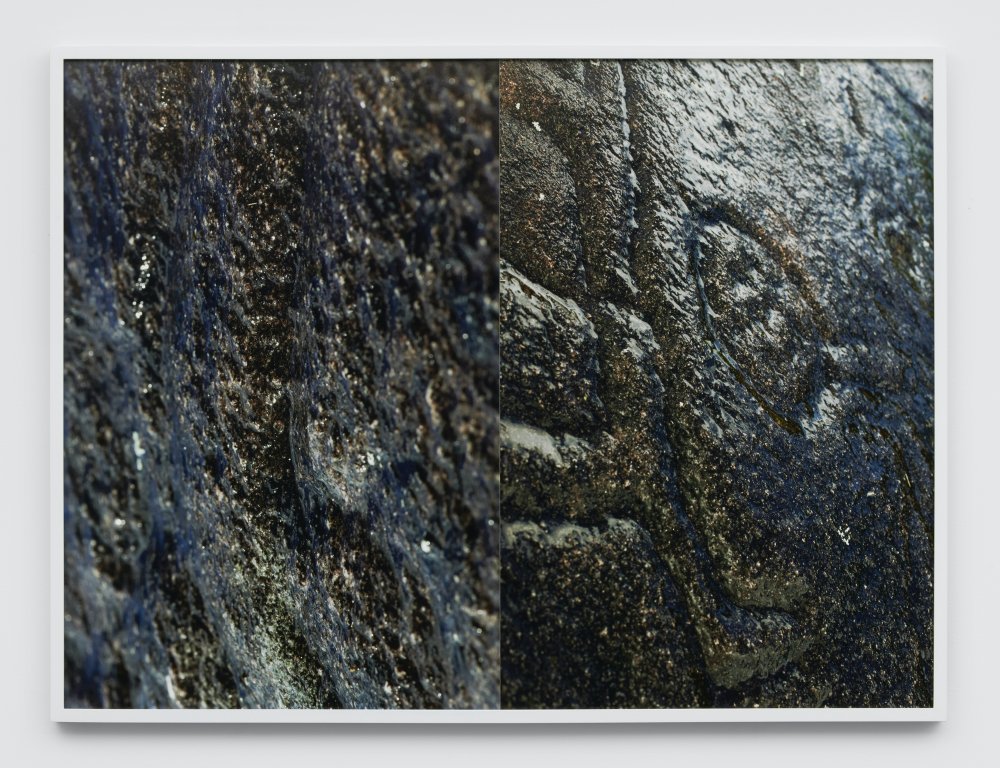 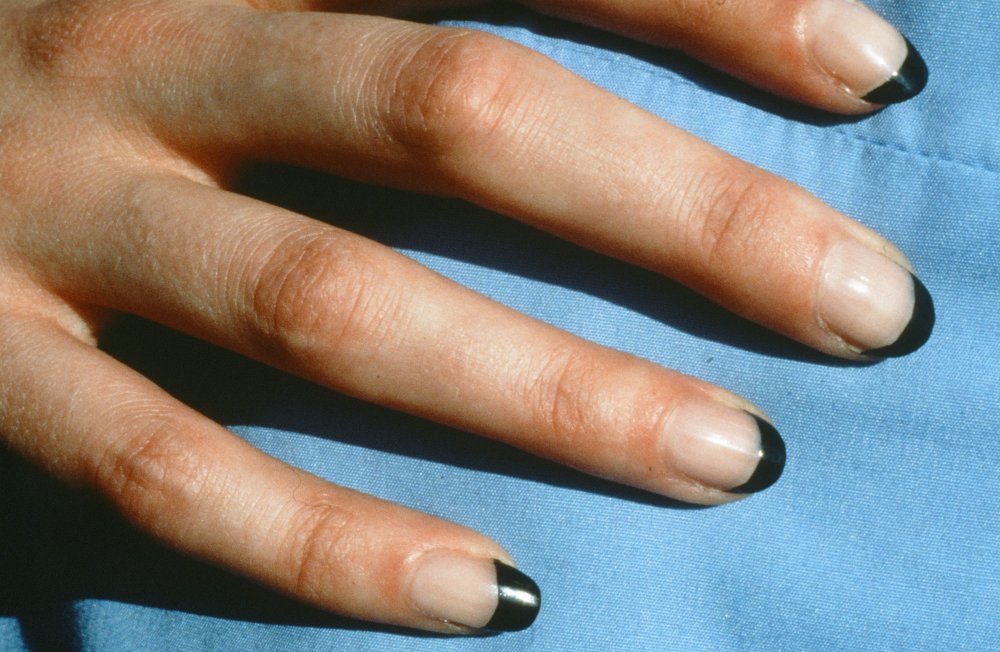 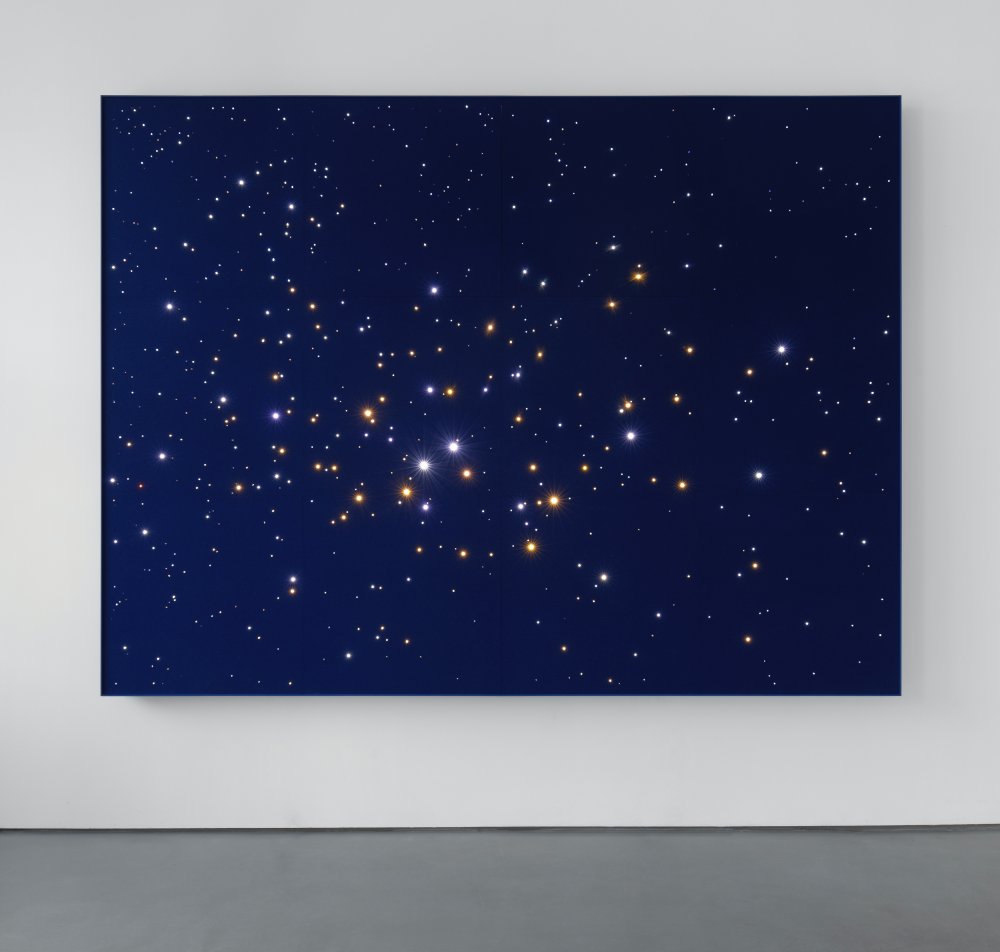 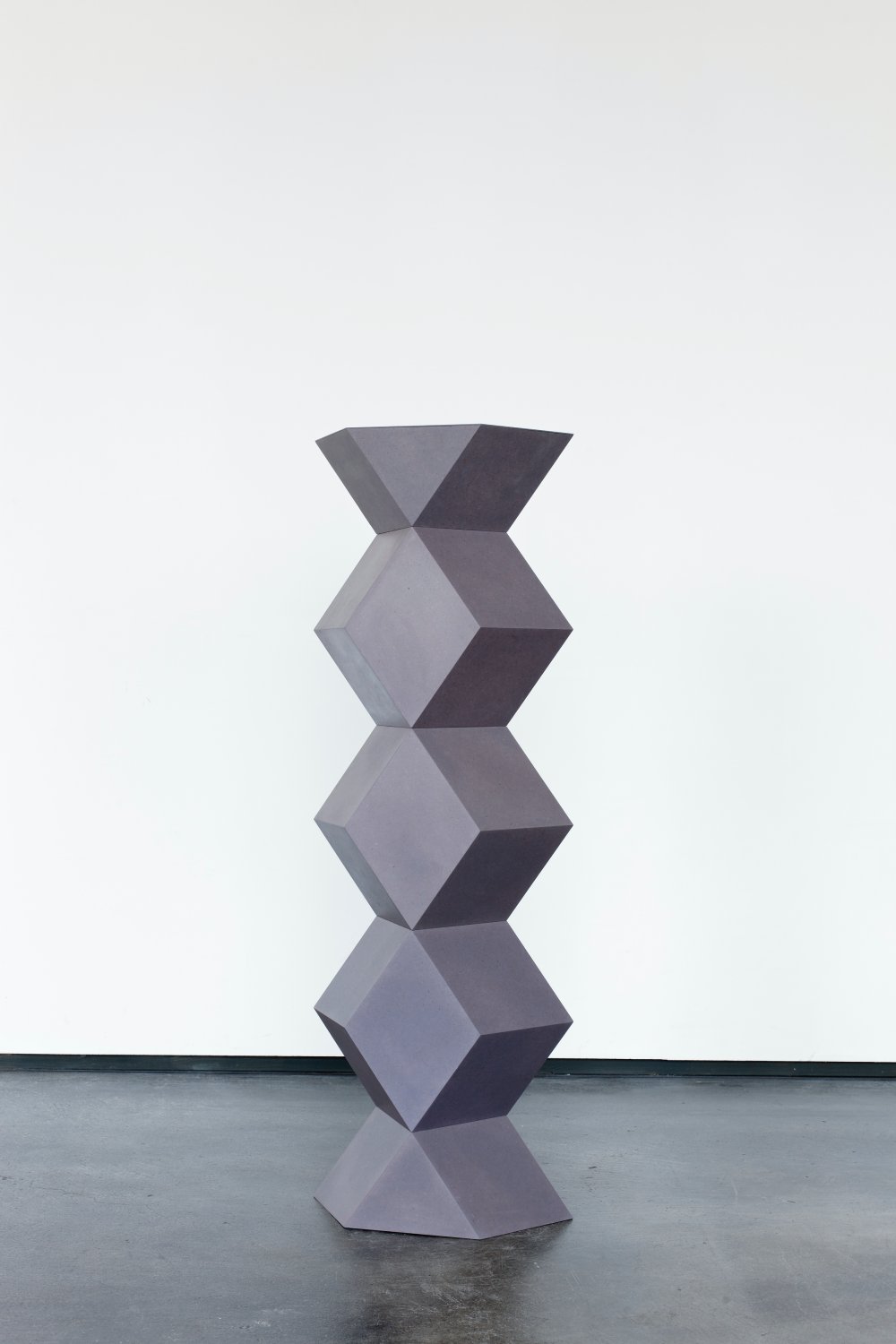 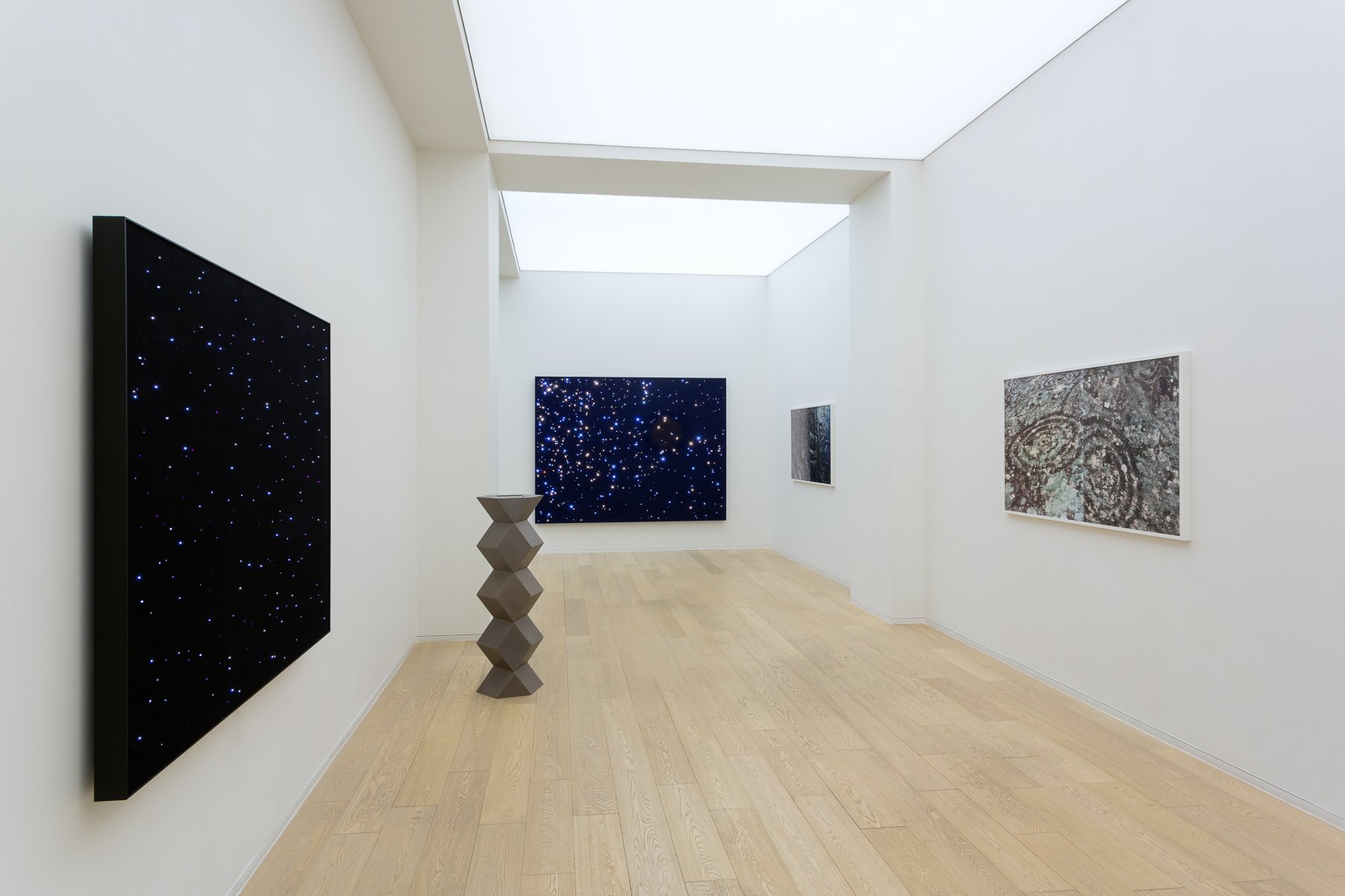 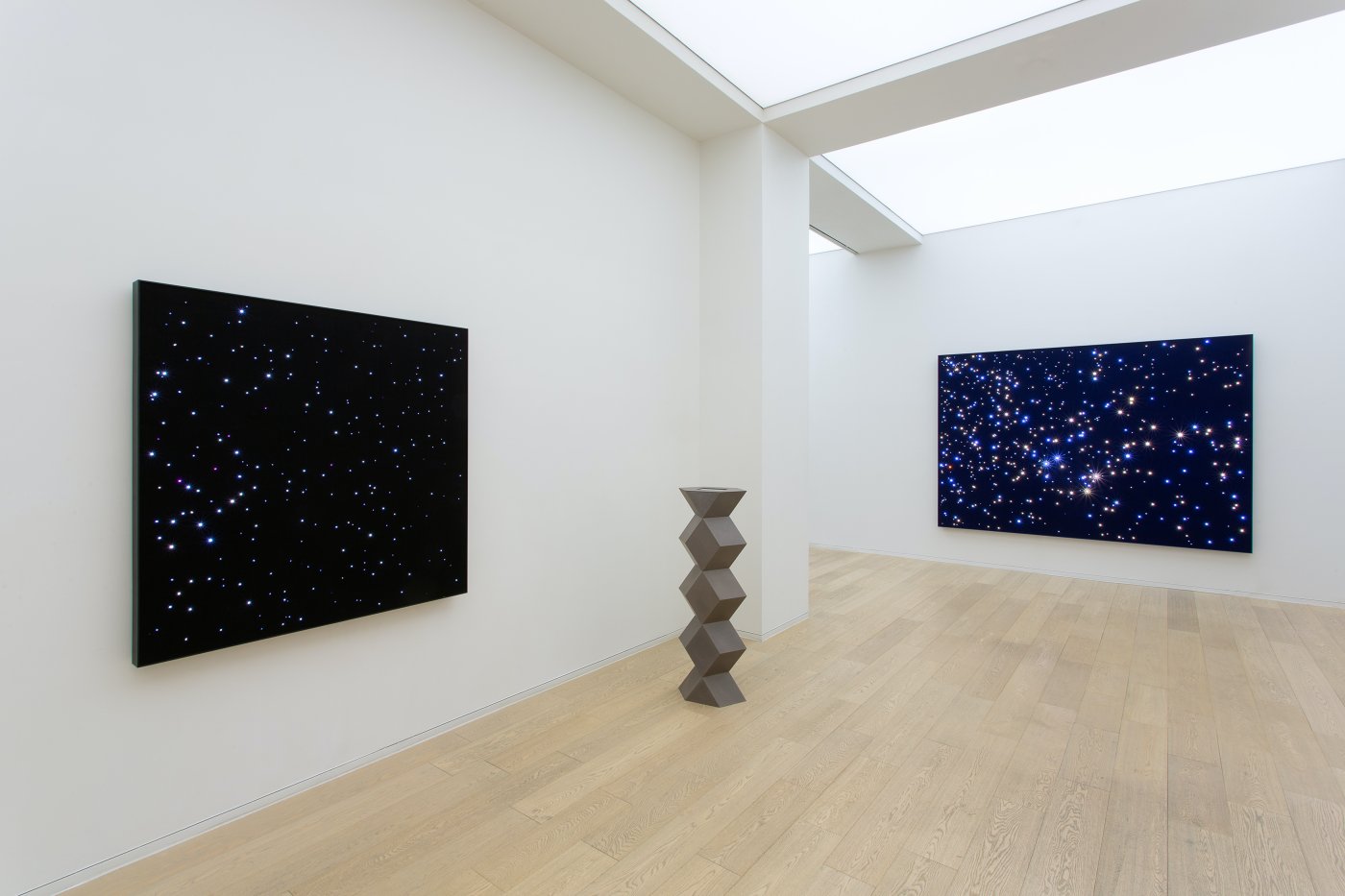 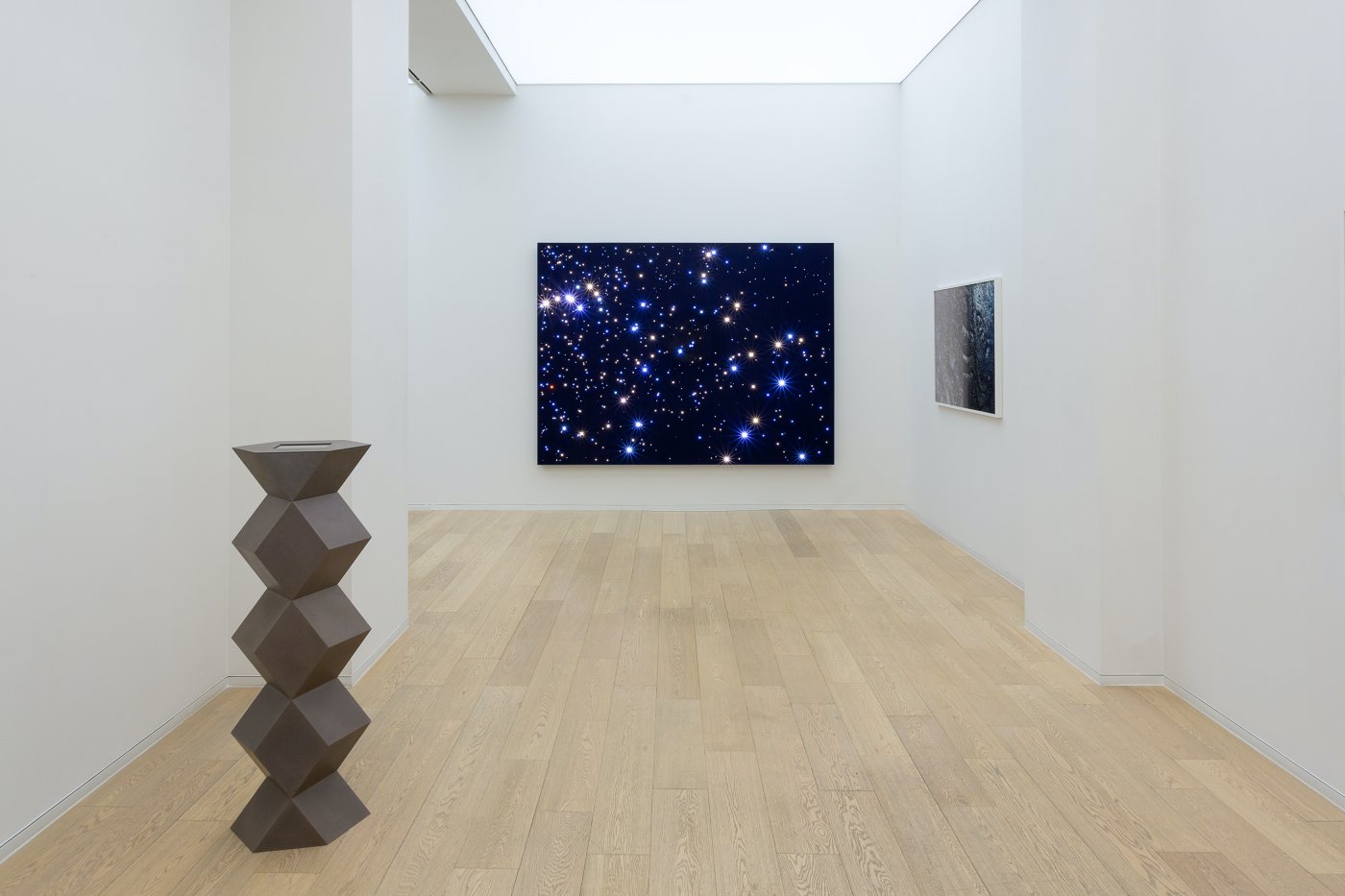 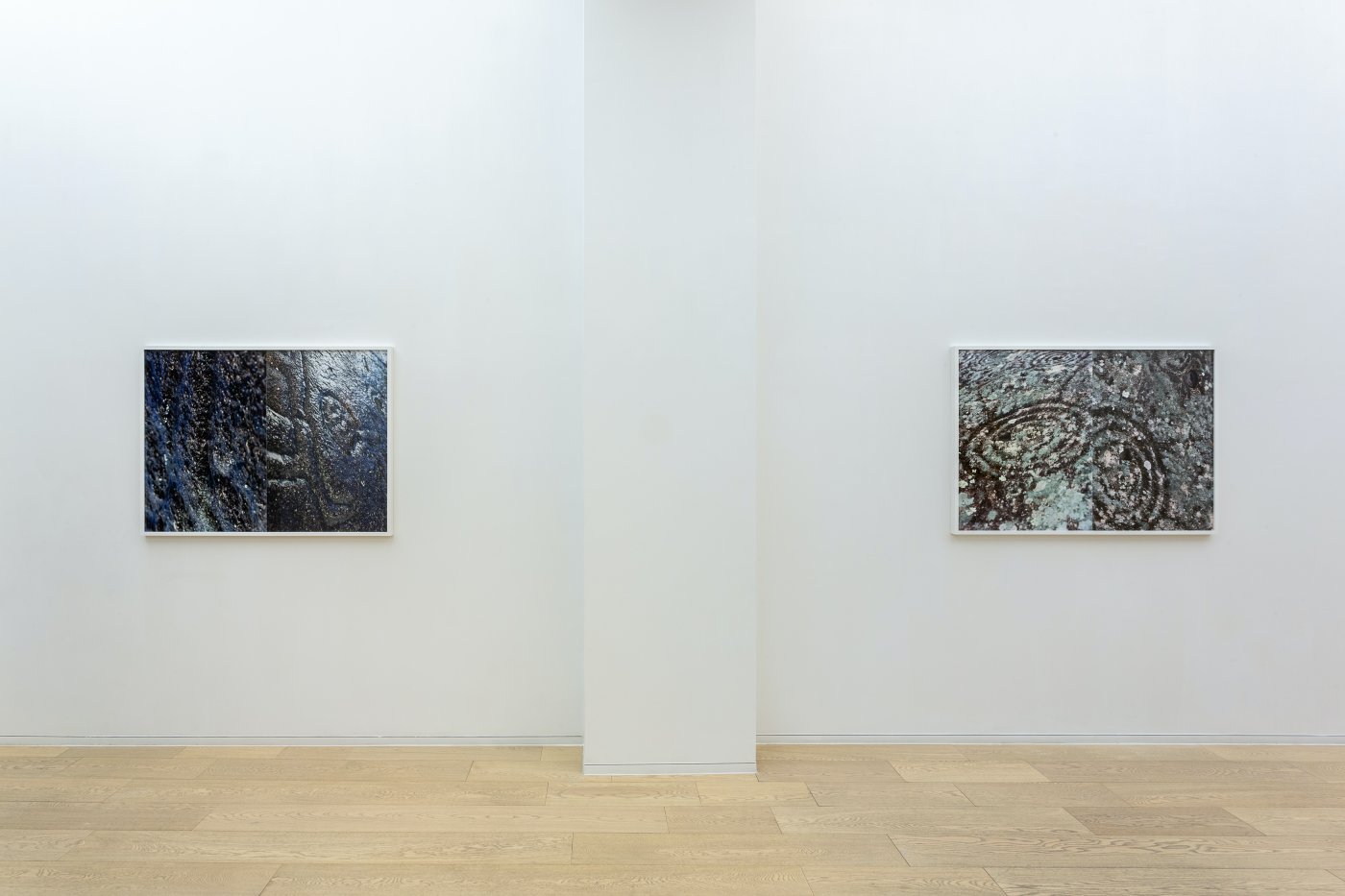 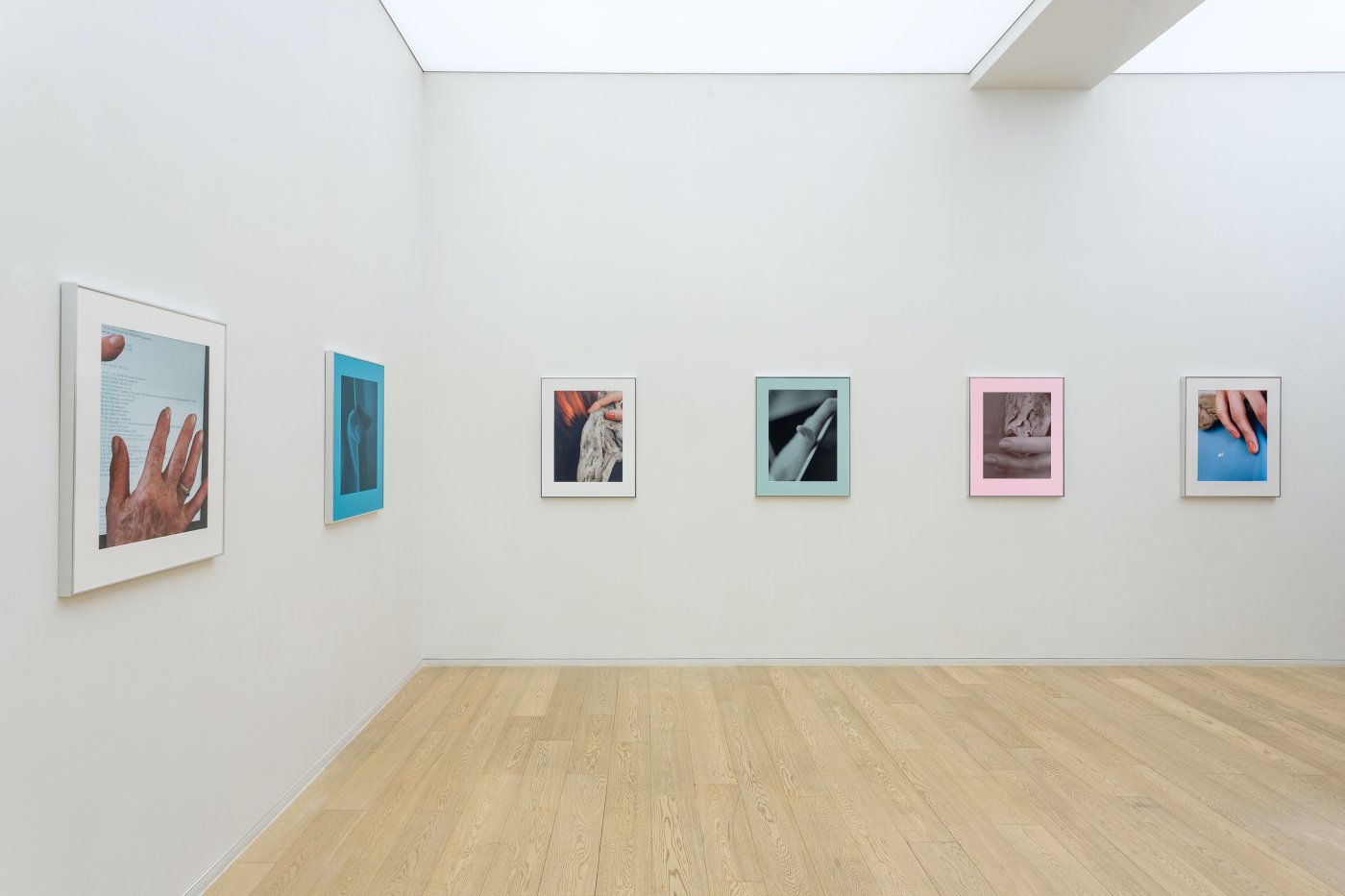 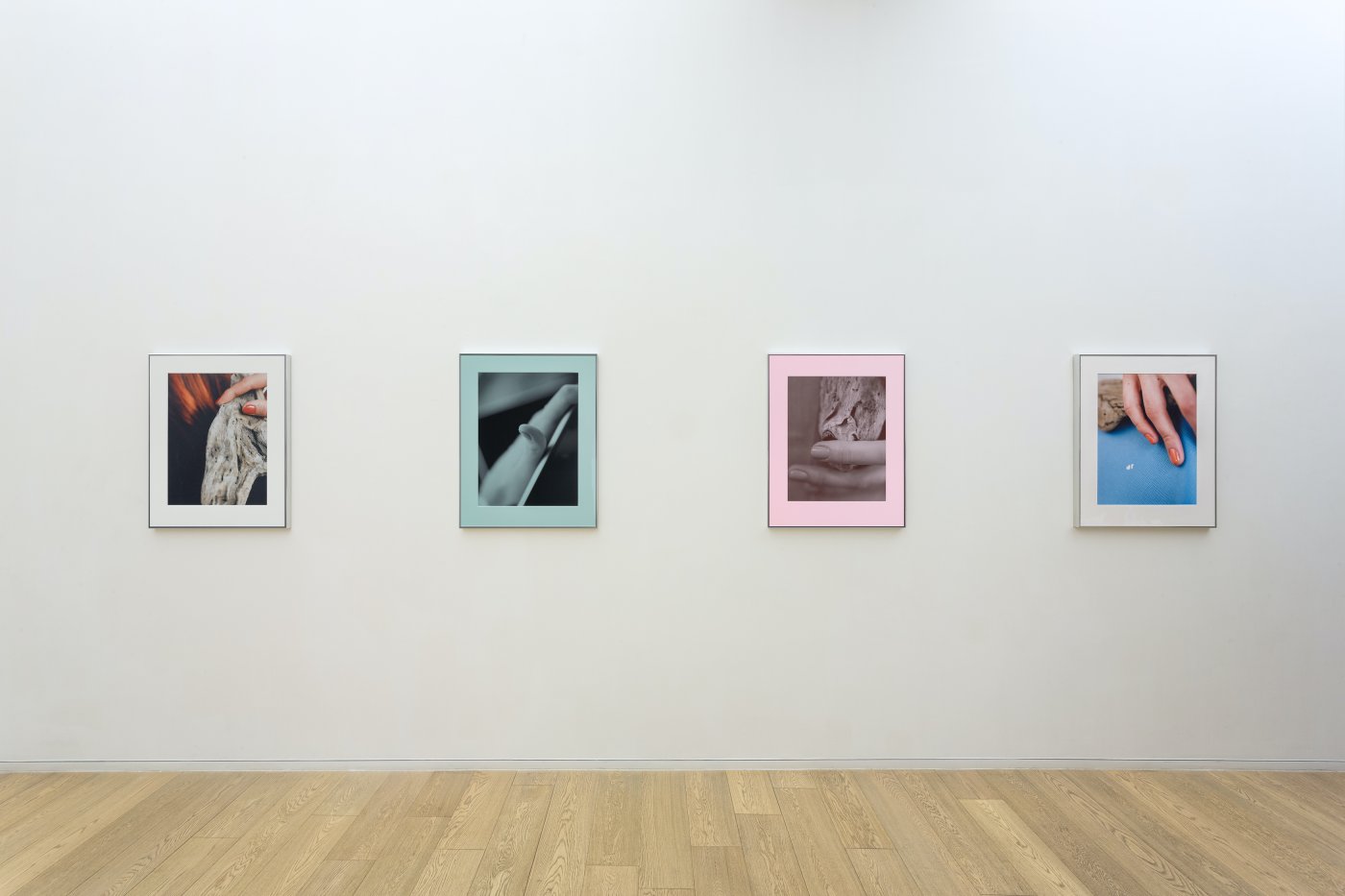 The ambiguity of the word ‘digits’ – signifying fingers, numerals or data – provides a point of entry to a central theme in Bulloch’s practice: the use of technology to navigate the world, from a vast, universal perspective, to the small human scale of the artist’s fingertip. In Never Ending with iPad (2015) a stack of geometric units, conceived and designed using 3D imaging, has anthropomorphic proportions; crowned with a tablet installed with the video game Monument Valley, the sculpture invites its audience to become active participants in both the game and the artwork. In her Night Sky works, Bulloch recreates remote constellations as observed from various positions within the universe. Similarly to the sculptures, these twinkling installations explore the slippage between realms of the real and the virtual as we experience first-hand that which is fundamentally inaccessible without the aid of advanced technologies.

In Josephine Pryde’s photographic Hands (Für mich) series manicured women’s hands tap at touch-sensitive or tactile objects: phones, tablets, a piece of driftwood. Their brightly coloured nail varnish, sometimes slightly chipped, highlights the point of contact between body and object. The model’s head is never visible, concentrating the sense of an intimacy between the hands and the surfaces they touch. In recent additions to the series, Pryde has framed black and white photographs behind coloured Perspex, creating a physical filter through which the hands are seen continuing their explorations. Bulloch’s Working Manicure, is a performative intervention, first conceived of in 1996. The artwork is a specific manicure to be worn by members of gallery staff: a manicure with a twist. Instead of the classic French manicure, Bulloch simulates dirty fingernails by replacing the white tip with a band of black polish. Working Manicure is a conceptual sculpture that playfully probes artistic production.

In a recent series of works, Pryde investigates prehistoric engravings made in rock between 2000-4000 years ago, known broadly as ‘cup and ring’ markings, which re-occur across a large region of Western Europe, from Scotland through Northumberland, to France, Spain and Portugal. The selected photographs combine two prints taken from different negatives, often of different carvings, juxtaposed in the same frame. Thus, no one singular image is used to pin down the technique or design. Pryde is interested in the connections between the carvings, and the migrations of people and ideas implied by their distribution, form and the technical knowledge needed to make them, rather than in speculating on what the patterns might ‘mean’ – something that would regardless evade contemporary human knowledge. To the present day, the carvings remain outside, suggesting links drawn through time and space, caught in the rock beneath the open sky.