“One-stroke contains the universe and beyond; thousands and myriads of strokes and ink all begin here and end here, waiting only for one to take advantage of it.”
— Shitao, Chinese painter, calligrapher, and philosopher from the Qing Dynasty 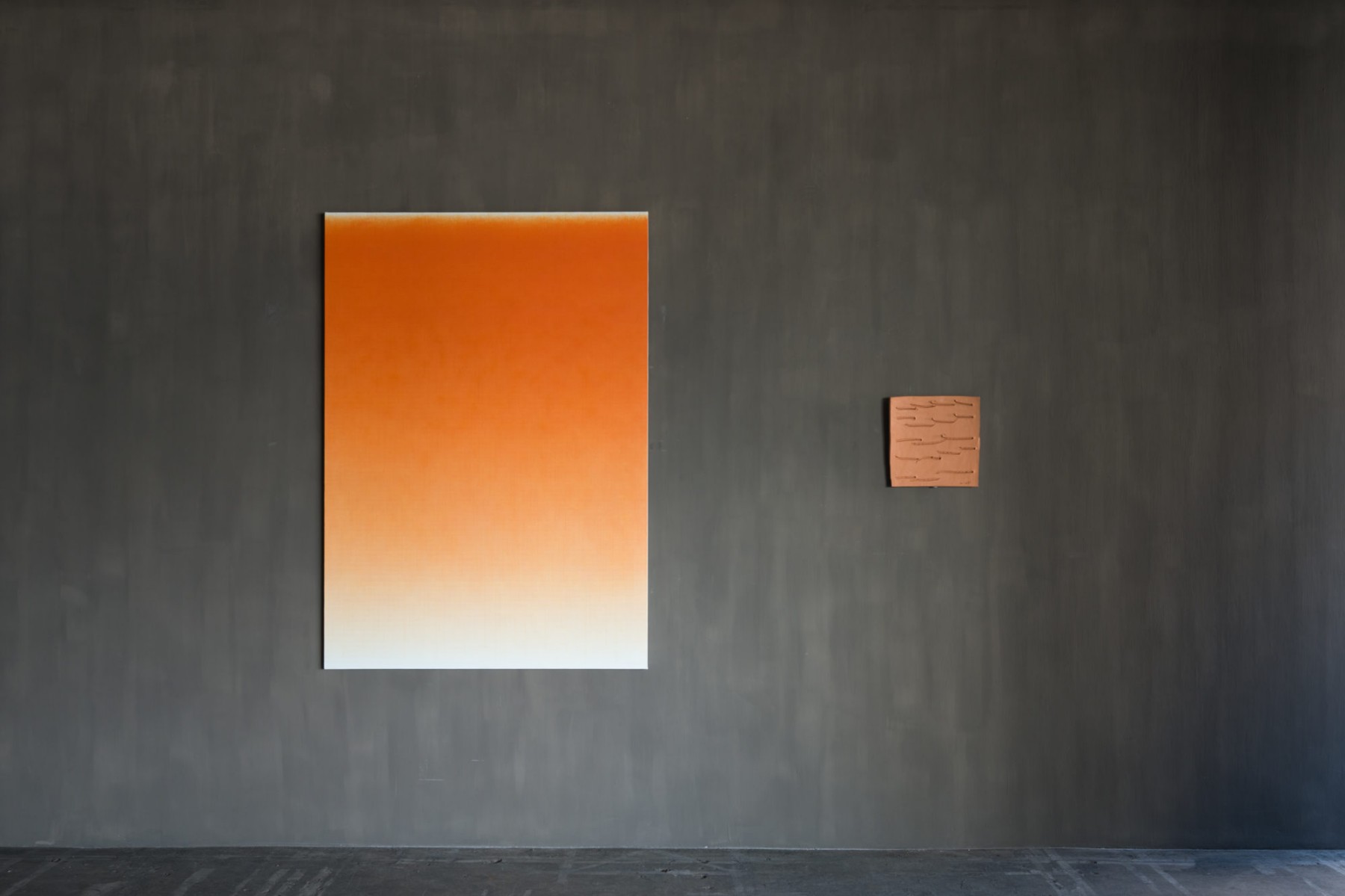 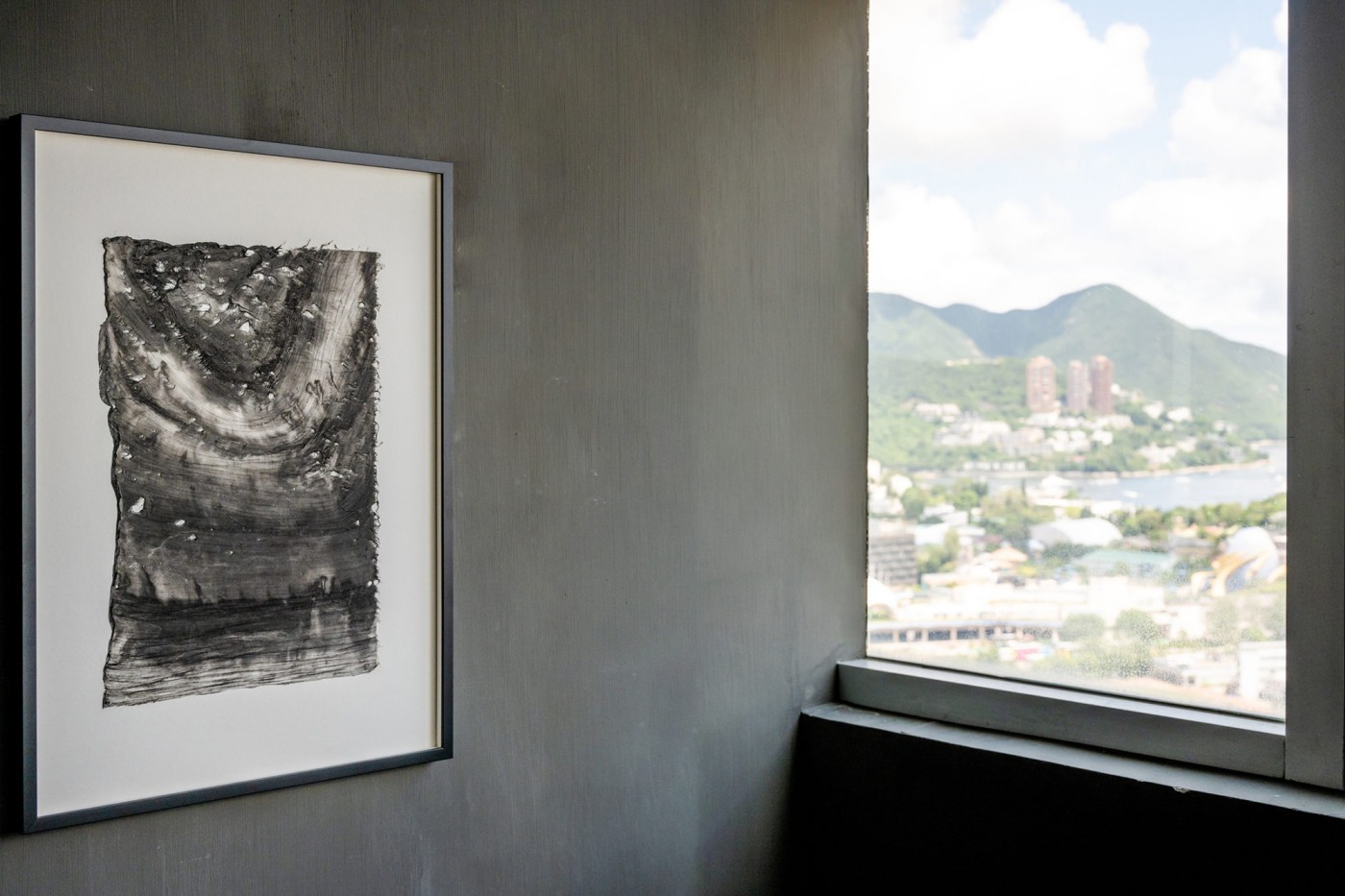 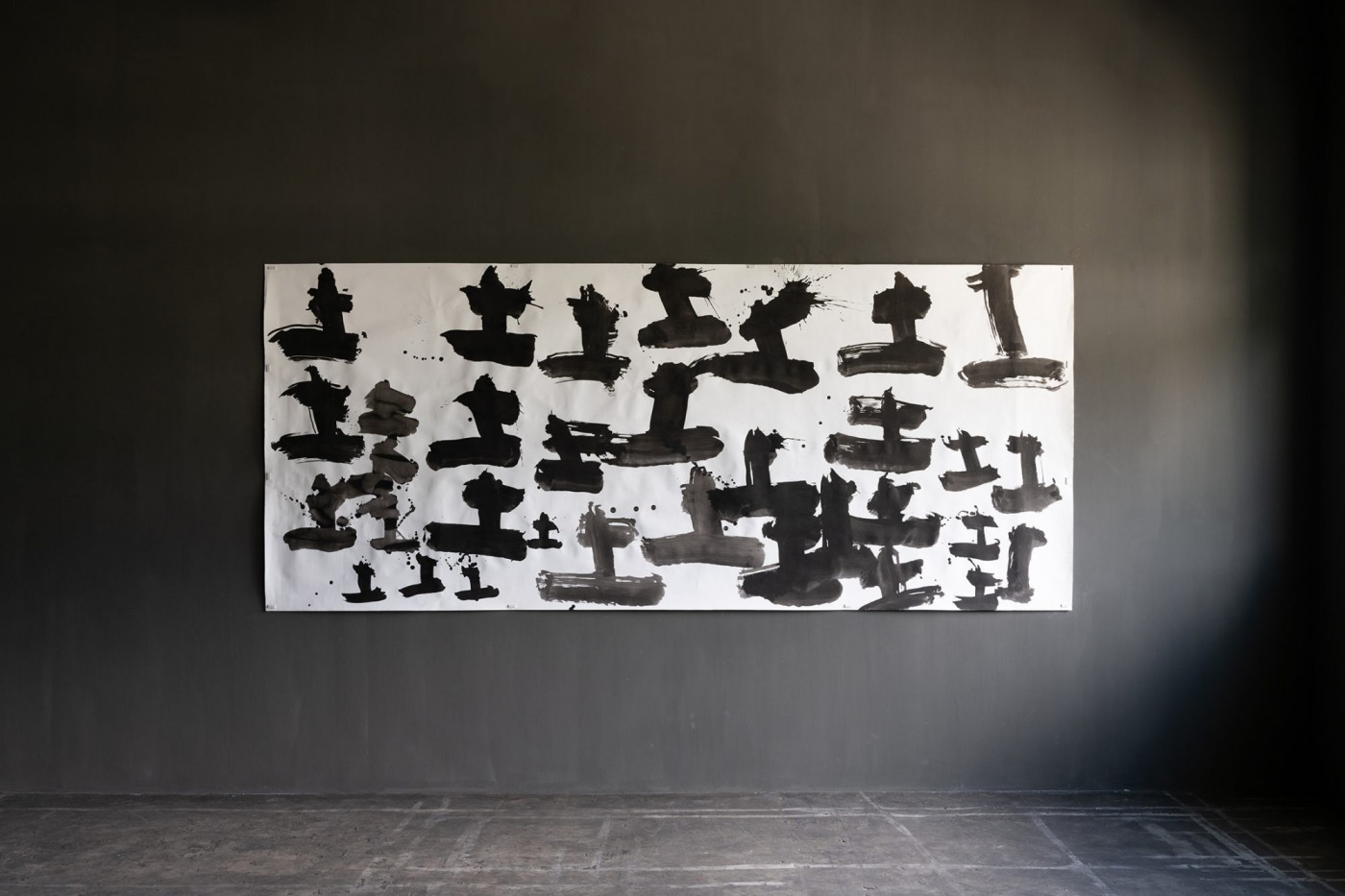 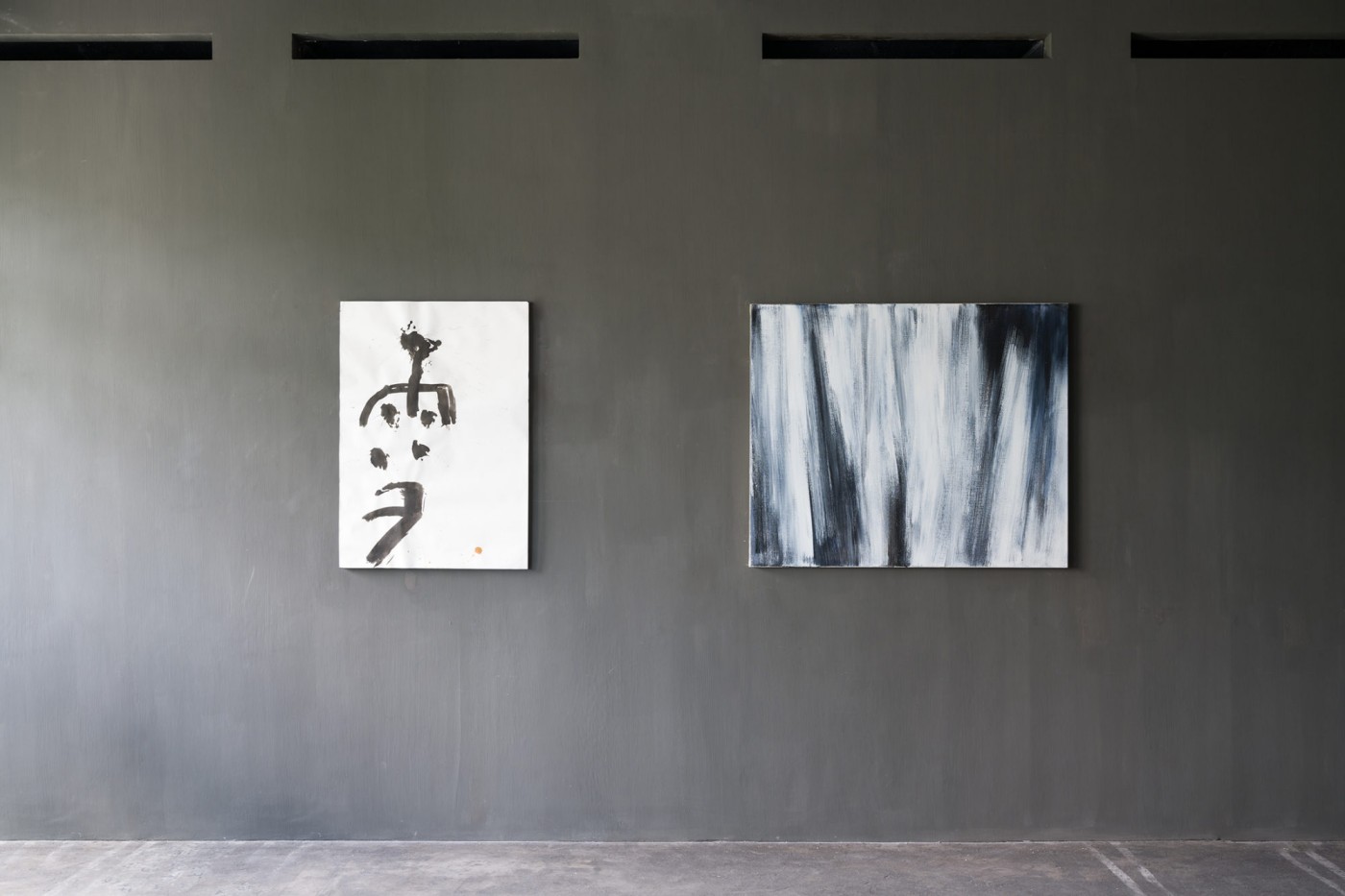 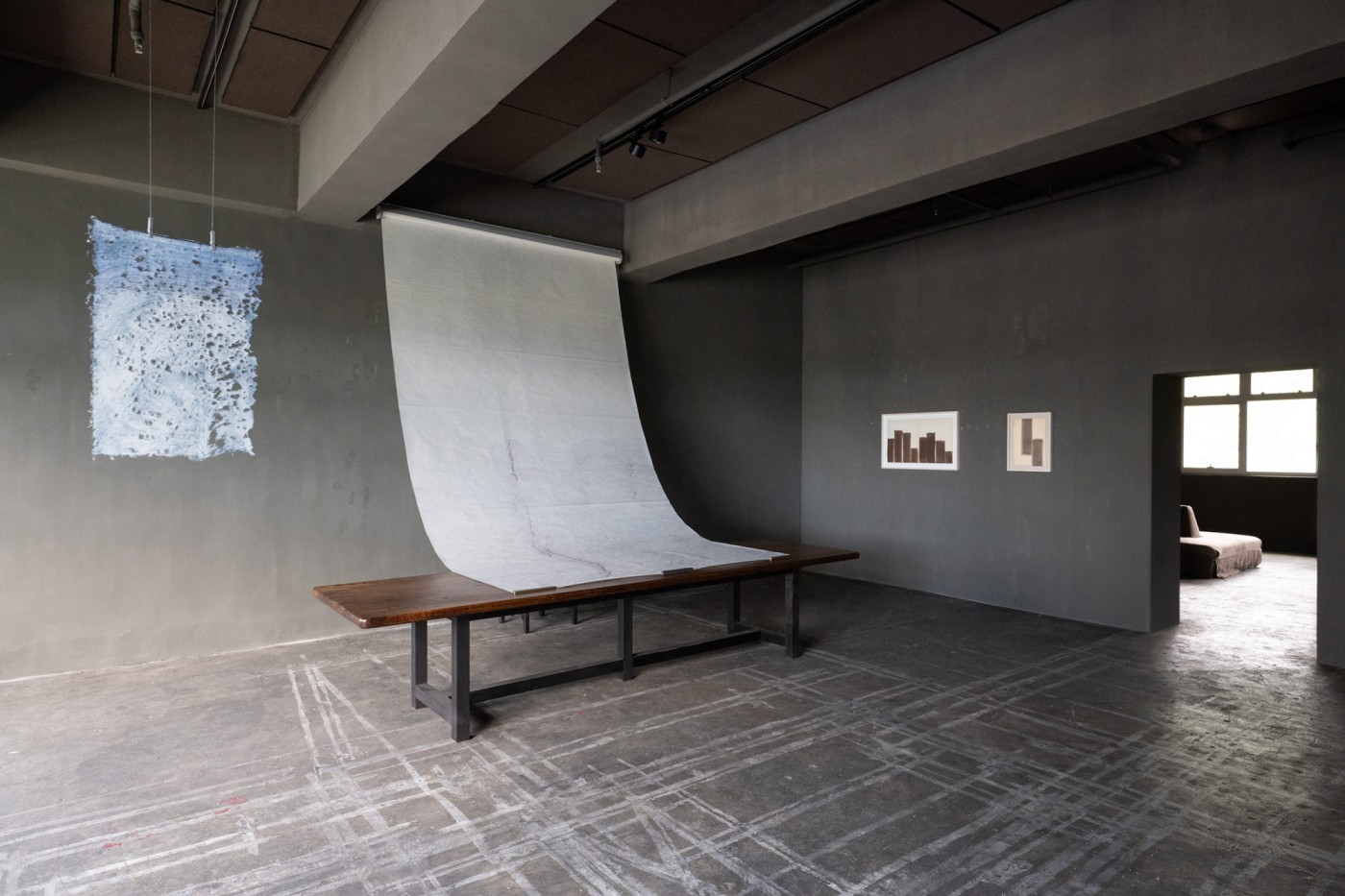 In a treatise on painting titled, Huayulu (画語録), Shitao criticises the establishment and seeks to convey something more primal in a painting — a single, holistic brushstroke. Shitao’s work proclaims that the artist should be able to show the universe in a way that one profound line integrates everything, embracing the artist’s mind to the body then to the brush and finally to ink, to achieve their spiritual nourishment. One stroke should even reflect the artist’s moral cultivation.

The group exhibition, Brushstroke and Beyond, exemplifies artists’ self-cultivation by demonstrating their unique visual expressions to further elaborate how one stroke can extend beyond their limitations. The works of eight artists — Yun Hyong-keun, Masatoshi Masanobu, Lee Ufan, Raimund Girke, Shen Chen, Michel Mouffe, Shiro Tsujimura, and Hong Kong artist Pong Yu Wai — are focussed on their expansive approach to creative language gestures, such as scribble, line, and calligraphy. The gallery invites Pong Yu Wai to participate in this exhibition as a part of Hong Kong Gallery Association’s Summer Program, which is the annual project which focuses on the local art scene and creating a positive impact on the local talent within the community by allowing the artist to present his major works to embody his strong platform in the gallery.

A primordial line is not merely a single stroke. It is something more cardinal that forms an artist’s sensitivity and cultivation. By illuminating Shitao’s one-stroke concept, this exhibition demonstrates how artists connect with Shitao’s values and wisdom, and extensively elaborate their unique ways to show a sense of liberation, imagination, and achieving their boundless potential.

Pong Yu Wai (b. 1982) has developed his oeuvre with ink from a ballpoint pen on paper, spinning the thread of his emotion and mind continuously with one line as it multiplies rhythmically. His lifelong drawing work, “Rhythm of landscape”, is a 12-by-2 metre scrolling paper hung from the ceiling, which dominates the gallery’s main room. It represents his personal response to Hong Kong’s current social circumstances amid the city’s rich history. A collective force is depicted by drawing very fine and thin lines, yet Pong Yu’s visual language is as fluid as water, gently showing the ephemerality of the universe. During the exhibition, Pong Yu extends his studio to the gallery, continuing to create the work every day.

Presented in dialogue with Pongyu’s drawing, Yun Hyoung-keun’s (1928 – 2007) sentiments and aesthetics are further investigated by muted, receded colors, and simple composition of bold strips of line in ultramarine and burnt umber. The colour permeates into the papers quickly and creates blurred margins around the strips of line. The colours and lines that Yun expressed on two works on paper imbued with the Seonbi / Sunbi spirit of modesty and harmony with the nature, a noble Confucian philosophy. The process of Yun’s art making is meditative and organic akin to water seeping into the soil.

The painting which consists of thousands of traces of lines created by Shen Chen (b. 1955), embraces the spectators. A contemporary pioneer of Chinese abstract and experimental ink painting, Chen captures the harmony of ink and the blank white space of the canvas. Using his extensive techniques and knowledge of traditional Chinese ink painting, Chen creates an abstraction between fullness and nothingness. In a disciplined act of repetition, Chen’s painting is highly meditative. Regulating his breathing, Chen’s energy and concentration reflected on the painting in each line.

The Gallery is pleased to present Lee Ufan (b. 1936)’s early terracotta work “Tsuchi ni yo ru” (1986). The South Korean artist and one of the leading figures of the Mono-ha movement experiments the materiality of raw earth, which is the translation of “Tsuchi”. Each curved stroke on the surface of the soil appears repetitive yet fluid, moving in a way that affirms a sense of existence. From the left to right, Lee creates the primordial lines on the terracotta, carefully undertaking it with regard to the relationship of the space.

Masatoshi Masanobu’s (1911 – 1995) unconventional way of liberating himself included gestural and intuitive scribbling of the highest quality. As a founding member of the Japanese avant-garde group Gutai, whose slogan was, “Do something that no one has done before”, Masatoshi’s work shows expression, movement, and vibration, often appearing as multiple layers of scribbles in oil paint and enamel. These gestures seem automatic, as though he created art out of total freedom.

Drawing a line can be a representation of the artists’ wholeness, complexity, and state of mind. With ardent strokes, Raimund Girke (1930 – 2002) respectfully borrows the dynamic process from Taoism and Yin and Yang. Two opposite elements in this unknown universe co-exists in balance, showing the darkness only distinguishable in brightness. In his painting “Schnelles Weiss” (1997), which is translated as fast white, the white-coloured lines group together analytically and geometrically, then completely abstractly in a way that they seem to fill the entire canvas.

Belgian artist Michel Mouffe (b. 1957) is renowned for balancing architectural construction from within the canvas to explore concepts of time, space, being, and spirituality. Mouffe’s paintings was inspired by “Liu Xiaobo” who was the social activist awarded Nobel Peace Prize have a rather skin-like feel due to his creation process. Skin, as the human’s veil, is both a protective shell and a public representation; it subtly reveals a part of the hidden inner self in a shiver or contour of protuberances emerging from behind the canvas. The artistic strive between line and colour has appeared as a multitude of layers that fused into Mouffe’s subtle brushstrokes, putting the two elements to work hand in hand.

The calligraphic strokes of Japanese artist Shiro Tsujimura (b. 1947) express his strong artistic impulses. As a contemporary potter and calligraphist, Tsujimura’s poetic titles are linked to the ephemerality of nature such as “Earth” and “Snow”, yet are highly prolific and energetic. These works were created in 2013 during a live performance in our gallery space in Belgium.