David Zwirner presents Past into Present, paintings by Bridget Riley (b. 1931), in the gallery’s Grafton Street location in London. The exhibition principally features work by Riley from the last two years, with reference to the work of the past, both in her own practice and in the art of painting itself. 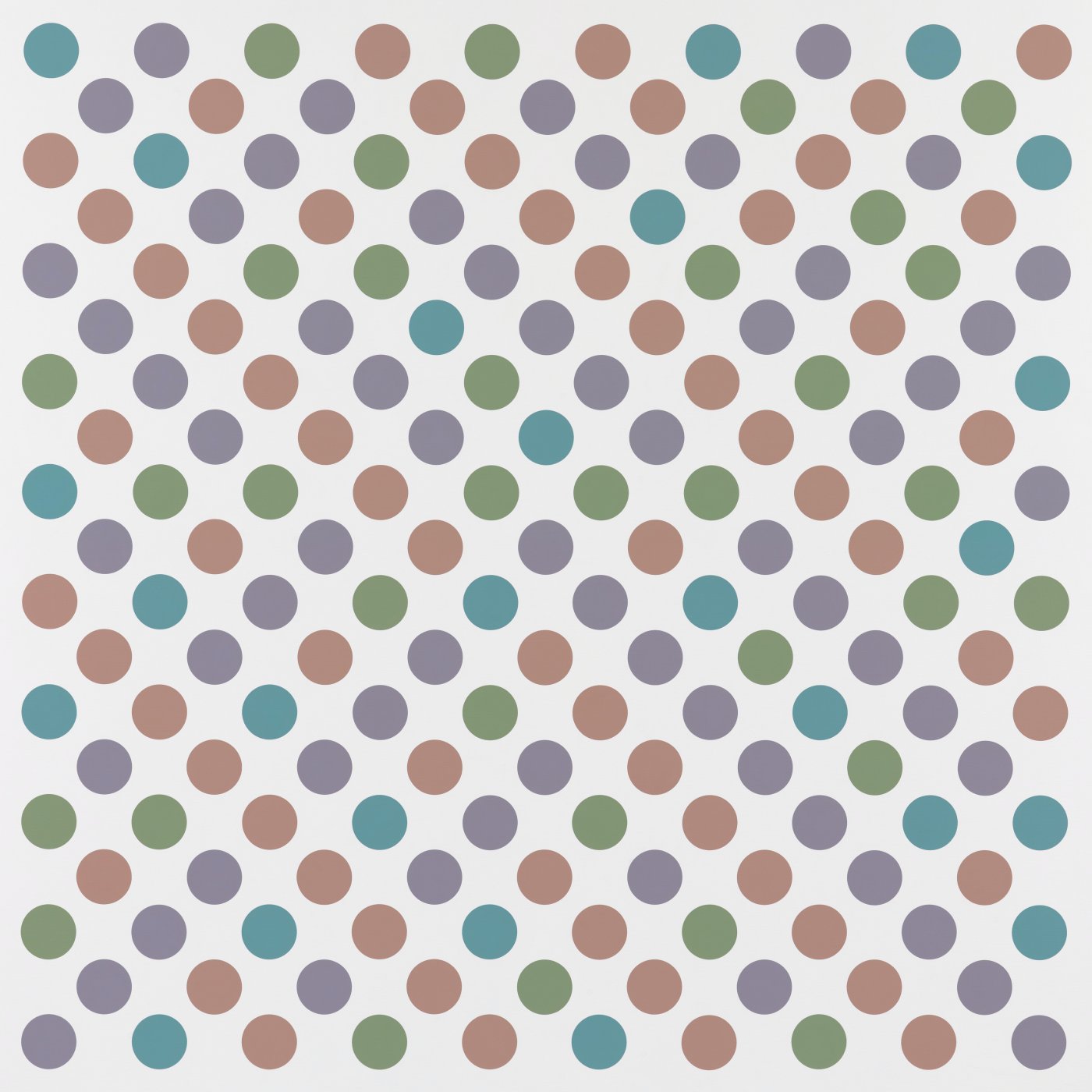 Over the course of her more than six-decade career, Riley has frequently returned to earlier ideas and even to specific works in order to identify alternative directions that a form could take. As she has noted, ‘I am sometimes asked “What is your objective” and this I cannot truthfully answer. I work “from” something rather than “towards” something. It is a process of discovery.’1

The exhibition includes an extension of the Measure for Measure series of paintings, advanced first through the addition of a fourth colour—turquoise—and then through a deepening of tone in the new Measure for Measure Dark paintings. These developments enrich the viewer’s enjoyment, giving them something more to look at.

Since the gallery’s exhibition of Measure for Measure paintings in 2018, the large wall painting Messengers (2019) has been installed in the Annenberg Court at The National Gallery, London, using the palette of the same three colours—off-orange, off-blue, and off-green.

Also included are Riley’s new Intervals paintings, which have only been seen in London at Frieze before COVID struck, and are her most recent engagement with sustained inquiry within a self-determined set of formal parameters. As Éric de Chassey notes, ‘In the Intervals, as in the Measure for Measure paintings, the conflicts and contradictions are subtle—or non-assertive—but they clearly are fundamental to the kind of harmony that Riley strives for and achieves in each picture.’2 The Intervals paintings share the three colours of the Vapour paintings and the Measure for Measure series.

Following Riley’s visits to her retrospective exhibition at the National Galleries of Scotland and the Hayward Gallery in 2019 to 2020, she noticed how many of the visitors were looking attentively at the work on view and finding new things to discover in even the most familiar of her paintings. Riley herself had the same experience and this has prompted her to move the past into the present with two new Static paintings, first painted in 1966 following her trip to Mont Ventoux in the South of France, and being almost blinded by the brightness and shimmer of the white stone shale in the sunlight.

Black to White Discs, Riley’s second abstract painting in 1962, and its small study are also shown. In this painting, she deliberately worked to ‘slow down’ the movement of the eye by enlarging the scale of the units used and consequently the painting itself. This was a direct response to her first comparatively smaller painting Movement in Squares (1961).

On the occasion of the exhibition, a monograph is forthcoming from David Zwirner Books, featuring new scholarship by art historian Éric de Chassey.

Riley has worked with David Zwirner since 2014. This is her fifth solo exhibition with the gallery. She lives and works in London, Cornwall, and France.

Riley’s first solo exhibitions were held at Gallery One, London, in 1962 and 1963, followed by two exhibitions at Robert Fraser Gallery, London, in 1966 and 1967. She was also at that time included in numerous group exhibitions, such as Towards Art?, Royal College of Art, London (1962); The New Generation, Whitechapel Gallery, London (1964); and Painting and Sculpture of a Decade 1954–1964, Tate Gallery, London (1964). In 1965, her work was included in the now-seminal group exhibition The Responsive Eye, organised by William Seitz at The Museum of Modern Art, New York. In 1968, she represented Great Britain at the 34th Venice Biennale (along with Philip King), where she was the first living British painter to win the prestigious International Prize for Painting. Her first retrospective, covering the period from 1961 to 1970, opened at the Kunstverein Hannover in 1971 and subsequently travelled to Kunsthalle Bern; Kunsthalle Düsseldorf; Galleria Civica d’Arte Moderna, Turin; and the Hayward Gallery, London.

A large-scale wall painting by Riley entitled Messengers was unveiled in 2019 at The National Gallery in London. Also in 2019, a solo presentation of the artist’s work that was organised by the National Galleries of Scotland opened at the Scottish National Gallery, Edinburgh, and travelled to the Hayward Gallery, London (2019–2020).

In 1974, Riley was named a CBE (Commander of the Most Excellent Order of the British Empire) and in 1999, appointed the Companion of Honour. In 2003, the artist was awarded the Praemium Imperiale in Tokyo. She received the Kaiser Ring of the City of Goslar, Germany, in 2009 and the Rubens Prize of the City of Siegen, Germany, in 2012.