Nahmad Contemporary presents BRAQUE | PICASSO, an intimate exhibition honoring the two greatest collaborators of 20th-century art. Featuring two masterworks by Georges Braque (1882-1963) and Pablo Picasso (1881-1973), each created at the height of their careers in the 1930s, the presentation illuminates the endurance of their artistic symbiosis even after their iconic friendship and collaboration dissolved. 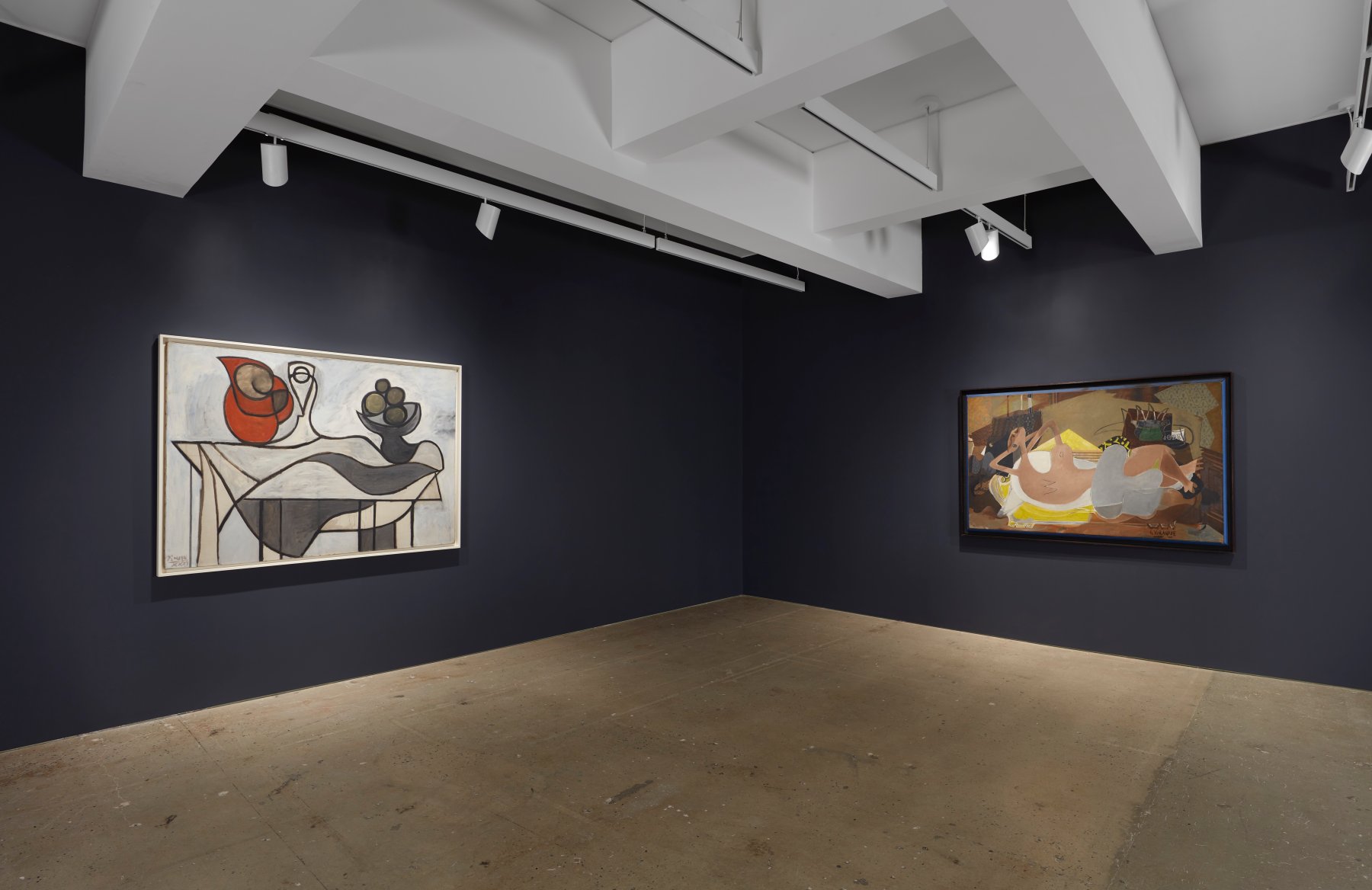 Cubism’s revolutionary invention is attributed to Braque and Picasso’s legendary working partnership between 1907 and 1914. To describe their interconnectedness, Braque once said, “We were like climbing partners roped together,” and Picasso likewise declared, “Almost every evening, either I went to Braque’s studio or Braque came to mine. Each of us had to see what the other had done during the day.” Indeed, as they challenged and motivated one another, their prolific output of early Cubist works evolved into such a similar aesthetic that Picasso purportedly once mistook a work by Braque for his own. Their fruitful alliance continued until Braque enlisted in the French Army just before World War I, after which they separated ways and developed more creative autonomy. Their artistic synergy, however, may have never truly ceased, as evidenced in this exhibition juxtaposing Picasso’s Pichet et Coupe de Fruits (1931) and Braque’s Nu Couché (1935). These two works, created more than 15 years after their pivotal collaborative period, profoundly reveal a continued affinity in their mid-career work. Produced in conjunction with the exhibition, an original documentary film will also be on view presenting archival footage of the artists, their legendary 20th-century art dealer, Daniel-Henry Kahnweiler, and French poet and filmmaker, Jean Cocteau, as well as scholarship from leading academics, such as William Rubin and John Richardson.

By the 1930s, Braque and Picasso were both celebrated and successful artists established in their own right. Picasso’s first career retrospective was held in the summer of 1932—a year after Pichet et Coupe de Fruits was created—at Galerie Georges Petit in Paris and traveled to Kunsthaus Zurich the following year. Braque’s first major retrospective followed shortly thereafter in Switzerland in the spring of the same year at the Kunsthalle Basel—two years prior to the creation of Nu Couché. While Braque’s preferred subject throughout his career was the still life, the artist introduced bifurcated and silhouetted figures into ornately patterned interiors in the mid 1930s. Picasso’s work during the early 1930s is notable for its transition to bold colors and evocative, stylized forms that intimated the feminine essence of his new mistress and muse.

Formally, Pichet et Coupe de Fruits and Nu Couché convey unmistakable parallels in their large scale, horizontal composition, and treatment of subject matter. The sweeping lines of the tablecloth’s undulating folds at the center of Picasso’s still life can be likened to the biomorphic shape of Braque’s reclining figure stretching nearly six feet across the canvas. The figure’s elevated head and bent elbow correspond spatially with the red pitcher—each of which are counterbalanced by the plant in Nu Couché and the bowl of fruit in Pichet et Coupe de Fruits. Both paintings employ a Cubist approach to deconstruct forms, yet the right angles of Cubism’s earlier years are replaced by a gestural rhythm and curving geometric shapes. Additionally, the canvases’ limited palettes are juxtaposed by singular accents of color—yellow in the case of Braque and red for Picasso.

The sensual female form on full display in these immense works is made all the more explicit by their monumental scale. Chevron breasts and a bulbous abdomen encircled by a bright white amoeba shape and vivid, yellow triangular sofa uncharacteristically confront the viewer in Braque’s painting. In Picasso’s work, the eye is encouraged to meander symbolically among the curvaceous pitcher and fruit—evocative of female fertility—and the sinuous, overlapping forms of the tablecloth—intimately reminiscent of bed sheets.

Pichet et Coupe de Fruits is one of three monumental still lifes executed by Picasso in February of the same year—one belongs to the Solomon R. Guggenheim Museum, New York and the other to the Saint Louis Art Museum, Missouri—that have been linked to the artist’s clandestine extramarital affair with the much younger Marie-Thérèse Walter, whom he met in 1927 and whose figure infiltrated his art in an increasingly identifiable way in the early 1930s. Due to their anthropomorphic character and encrypted traces of the female body, these still lifes have been described as codified portraits of Walter during the early stages of their relationship. The human-sized curvilinear forms in Pichet et Coupe de Fruits are analogous with the rhythmic arabesques delineating Walter’s body in the artist’s more overt depictions of her. These associated still lifes precipitated Picasso’s increasingly lyrical aesthetic during one of his most vigorous and sensuous periods of creativity just prior to his first major retrospective exhibition.

Braque’s portrayal of the female nude in Nu Couché likewise may signal a transitional moment within the artist’s oeuvre. While the extreme bodily distortions are a radical departure from his classically inspired nudes of the early 1920s, they are synonymous with several beach scenes that the artist created four years earlier after moving to the Normandy Coast in 1931. The recumbent pose rendered in Nu Couché, with arms folded overhead, crossed legs, and disproportionate body parts, is also notably reminiscent of Picasso’s renderings of Walter in repose. In fact, some scholars have attributed these seemingly uncharacteristic elements in Braque’s works at this time to Picasso’s influence. Although the pose in Nu Couché summons the musings of his former Cubist ally, the bifurcated face and warm hues of the patterned interior hint toward Braque’s evolving preference in the mid 1930s for orchestrating a pictorial symphony in which the figure and still life intertwine within the rich ornamentation of their domestic setting.

Through a confluence of ideas, motifs, style, and execution identified in these paintings by Braque and Picasso, the exhibition compellingly suggests that the artists reciprocal influence endured beyond Cubism. And, given the intimate social and artistic contexts of the artists, it would have been impossible for their lives to not collide during this period. Both Pichet et Coupe de Fruits and Nu Couché were exhibited shortly after their execution by the artists’ shared dealer, Paul Rosenberg. Moreover, we know that Braque was at the opening night of Picasso’s retrospective in 1932, where the paintings of his mistress were famously displayed for the first time. Additionally, Braque and Picasso were initially scheduled to have a large-scale group exhibition together with Fernand Léger at the Kunsthaus Zurich in the autumn of 1932, although ultimately the show was dedicated to Picasso. Both artists also took refuge from Paris and set up studios in Normandy homes at the same time. Thus, the clear analogies yielded by Braque’s amoebic female nude (one of Picasso’s preferred subjects) and Picasso’s corporeal still life (one of Braque’s preferred subjects)—which both conceptually and aesthetically intertwine the figure and still life—are not only a testament to the artists’ intense early companionship and visual language that they developed together, but also to the artistic dialogue and shared experimentation that endured in their work just before World War II.