Axel Vervoordt Gallery Hong Kong presents Boundless Union: Bae Bien-U and Kwon Dae-Sup. The exhibition features large- and small-format photography works from Bae Bien-U’s Sonamu (Pine Trees) series and an installation of Kwon Dae-Sup’s moon jars. Coincidentally, Bae Bien-U and Kwon Dae-Sup were both born in Korea in the 1950s and have dedicated decades of their careers to subject matters dear to their native country and adopted practices that have grown from intrinsic ideas of nature. 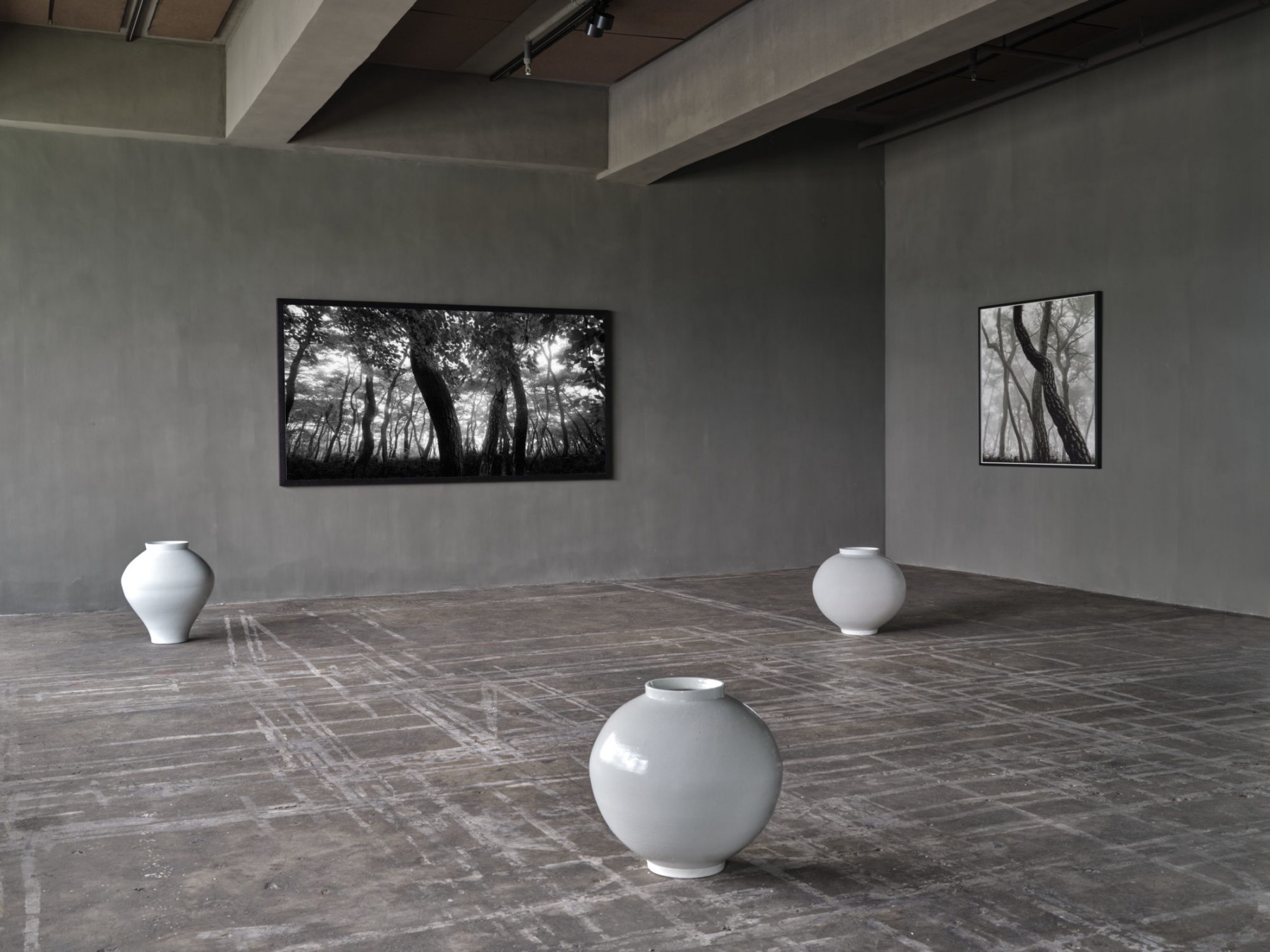 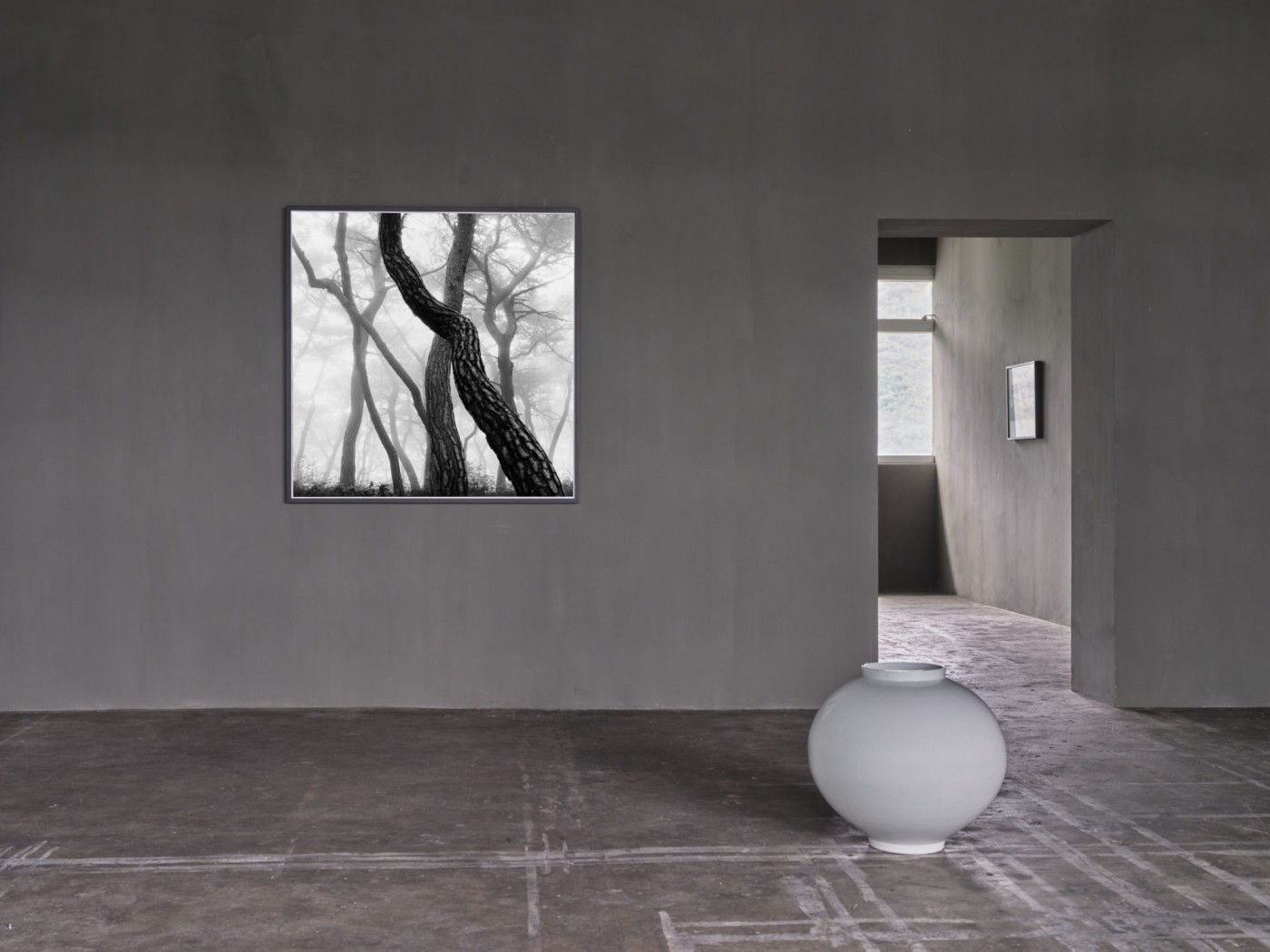 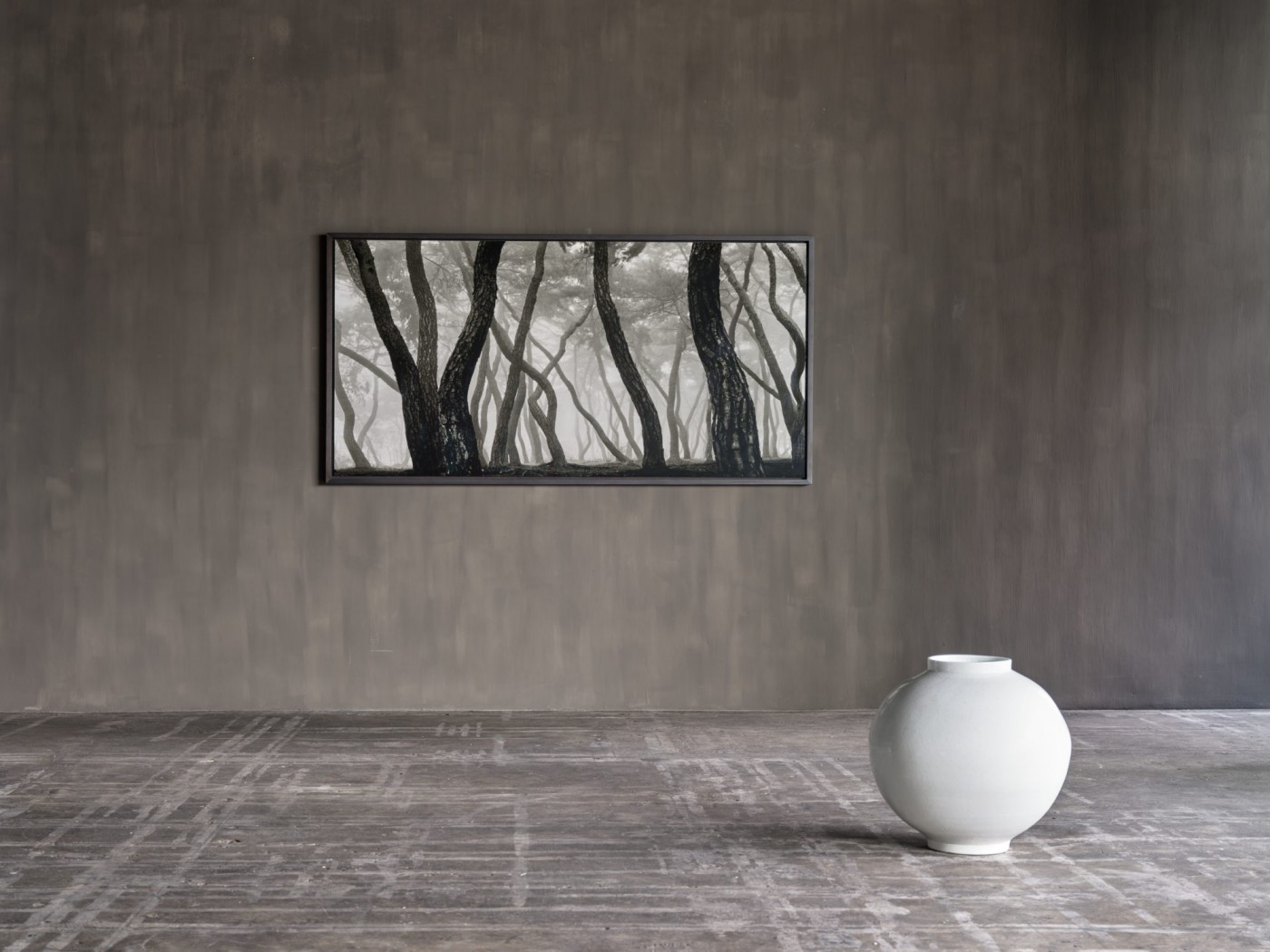 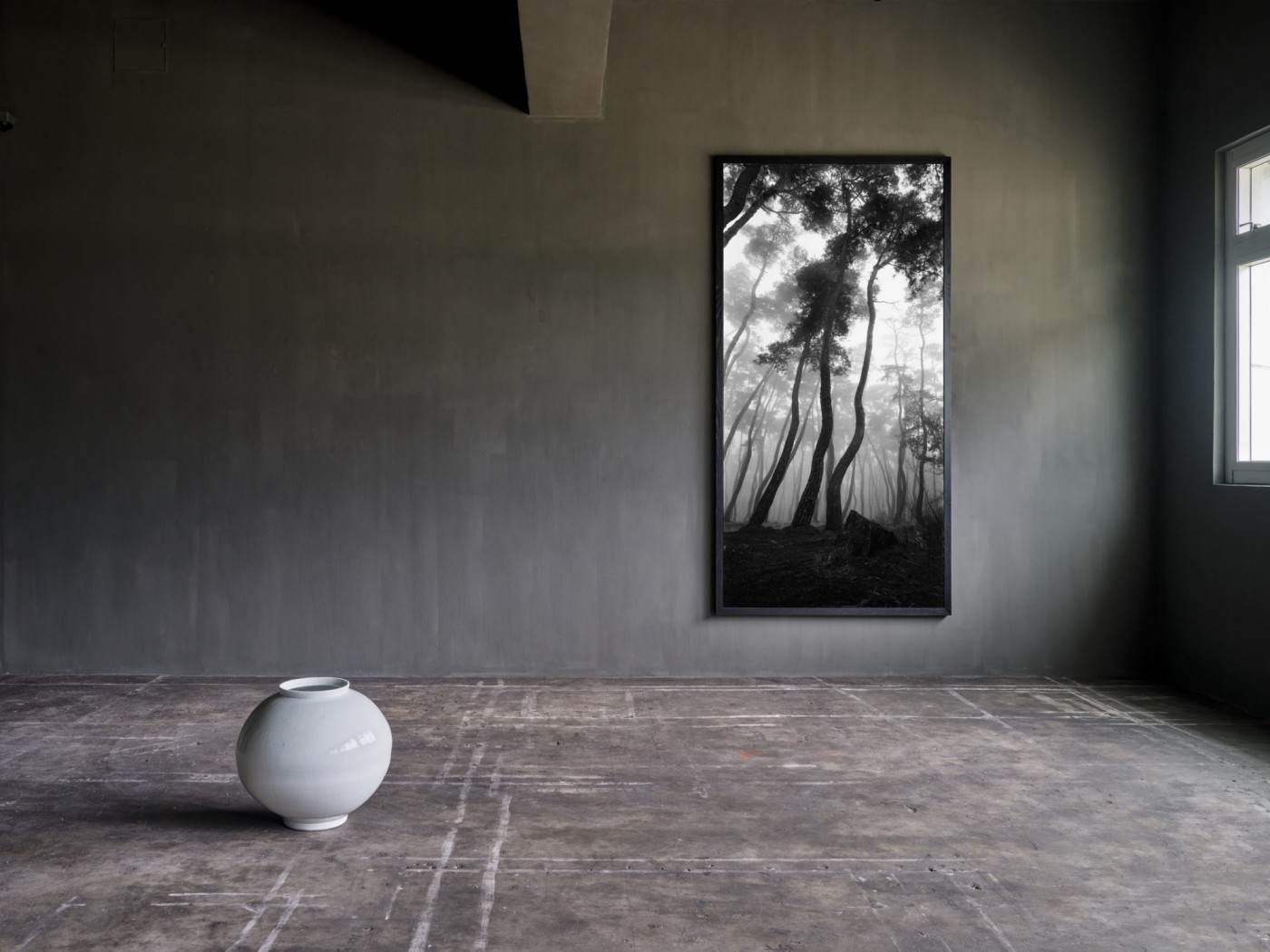 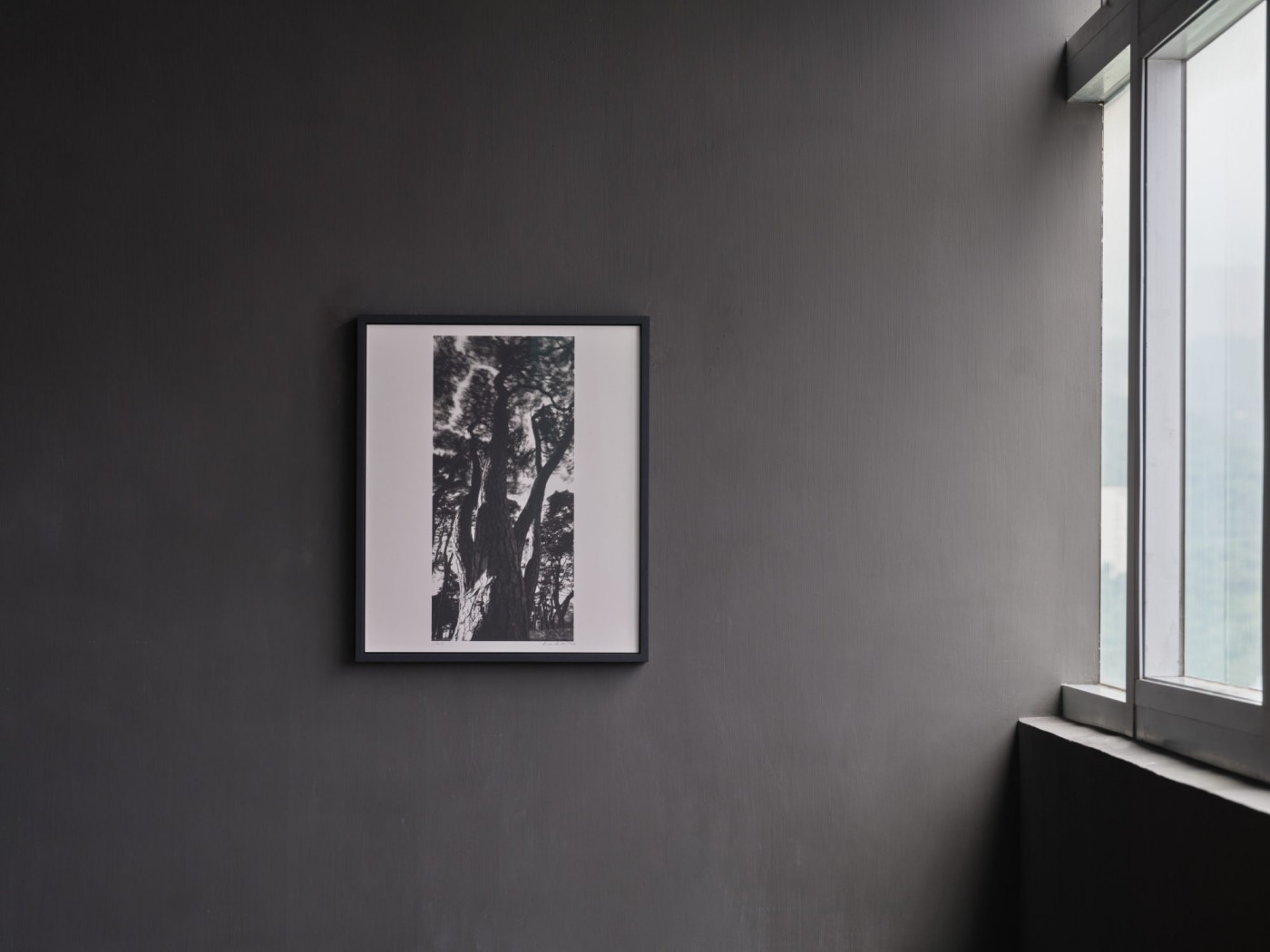 The exhibition is about creating resonance in stillness and motion, balance and counterbalance, and finding an equilibrium between different states of being. As the energy of life is believed to pass through them, pine trees mediate between heaven and earth and are important in many rituals of life and death. This energy of life extends to the moon jar, where a moon jar is a unity of its top and bottom halves, joined carefully at the rims to become one, echoing the shape of a full moon.

Bae Bien-U (°Yeosu, 1950) is renowned for creating meditative landscape photographs, which have an almost calligraphic quality. He has spent his life capturing his encounters with nature, most notably pine trees, as well as seas, islands, plants, and mountains. The selection of works for this exhibition arises from Bae’s Sonamu series, taken in the forest of the Gyeongju mountains, the capital of the ancient Korean kingdom of Silla. The leitmotif behind his photographs is a reflection on communion and the possible osmosis of man with nature — the source of life — with which we must live in harmony. Bae began taking pictures in the 1970s using traditional analog techniques. From 1980 until 2000, he utilised the best quality camera and film, developing his photographs in a dark room and printing them via gelatin silver process on high-quality papers. When Bae presses the shutter, he captures an invisible process in a split second and condenses it into a photograph. Bae’s photographs extend beyond their frames. They are opening as the viewer is invited to step into them, wander through the forest, and encounter the equilibrium of nature in boundless transformation. The three large works, SNM1A-096H (2007), SNM5A-011H (2014), and SNM1A-079V (1992) were recently selected for the Guangzhou Image Triennial 2021 and exhibited at the Guangdong Museum of Art.

Kwon Dae-Sup (°Daejeon, 1952) is a Korean contemporary pottery master known for his series of moon jars. A moon jar is a type of traditional Korean plain white porcelain (baekja daeho) that was originally made during the late period of the Joseon Dynasty for vessels for the royal court, from the late 17th century through the 18th century. The Joseon Dynasty adopted Neo-Confucianism as their official ideology, which prioritised a life of austerity and purity, seeking ideals of modesty and honesty that could be observed in the literati Seonbi/Sunbi spirit. The name of the moon jar comes from its shape and milky color of the glaze that reminds us of a full moon. The large volume and generous shape illustrate not only the cultural aspects emphasising the full circle of life and humbleness with the intentional lack of embellishments, but also reveals the beauty that lies within the material’s slight imperfections. Kwon breaks all of the works that do not satisfy him and only keeps the ones that move his soul, resulting in only a limited number of examples made per year.

Kwon’s kiln and studio are in Gwangju, Gyeonggi province, where the first official kilns were established in the Joseon Dynasty. In a strenuous process, Kwon prepares the clay for throwing, by washing, straining, treading, and rolling it. He then places the prepared clay on the wheel-head as he turns the wheel by foot. Because of their size and weight, creating a moon jar as a single vessel would result in a collapse during firing. It requires exceptionally difficult and exact skills to consolidate the two halves together that make up the completed jar. Weather conditions, fuel quality, clay properties, and changes in the kiln atmosphere, all contribute to the outcome. Firing each jar in carefully controlled conditions, combined with chance elements and the help of nature, results in jars filled with soul and anomalies that are distinctive to Kwon’s techniques.

Boundless Union: Bae Bien-U and Kwon Dae-Sup is imbued with the Seonbi/Sunbi spirit of modesty and harmony with nature, a noble Confucian philosophy that carried throughout the Joseon Dynasty. The exhibition explores virtues of integrity and purity through Bae Bien-U and Kwon Dae-Sup’s introspective approach, dedication to their practice, and balance of their medium. Engulfed by the unbound spirit of photographs of pine trees and the modest simplicity of moon jars, viewers are encouraged to enter a state of contemplative tranquility, one that seeks communion with nature, reaching vast possibilities within the gallery space and beyond.