Bosco Sodi: A Thousand Li of Rivers and Mountains

Bosco Sodi: A Thousand Li of Rivers and Mountains 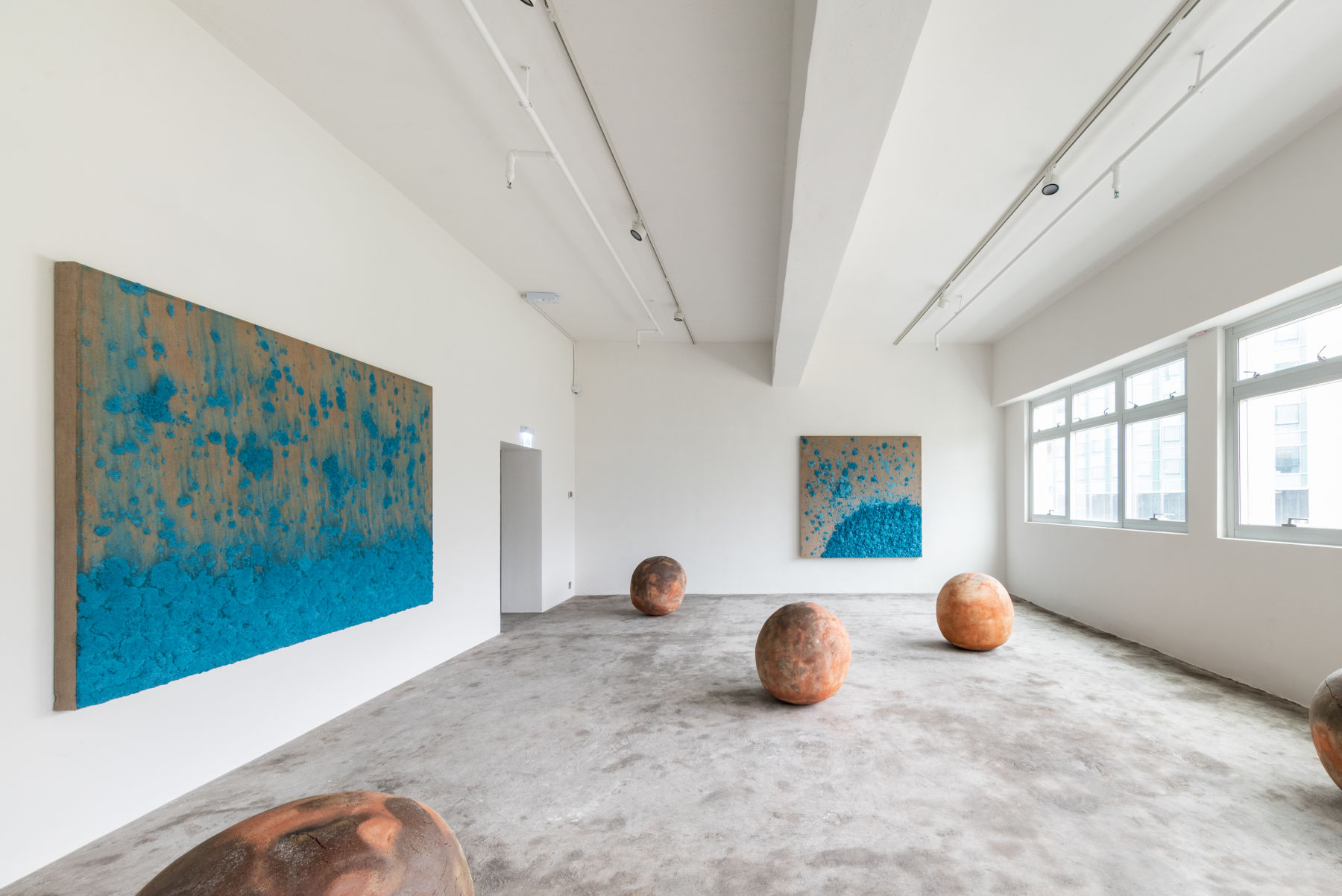 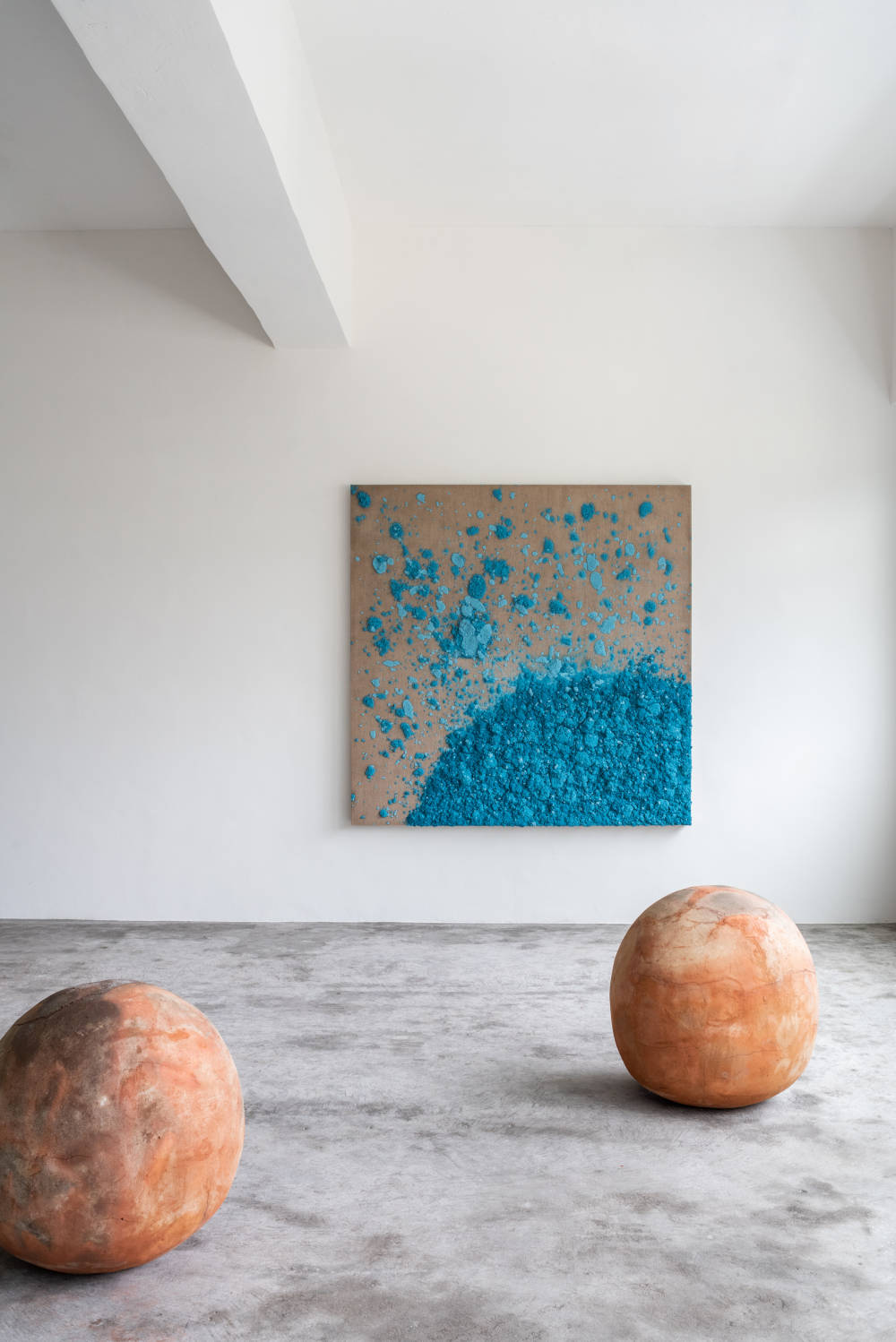 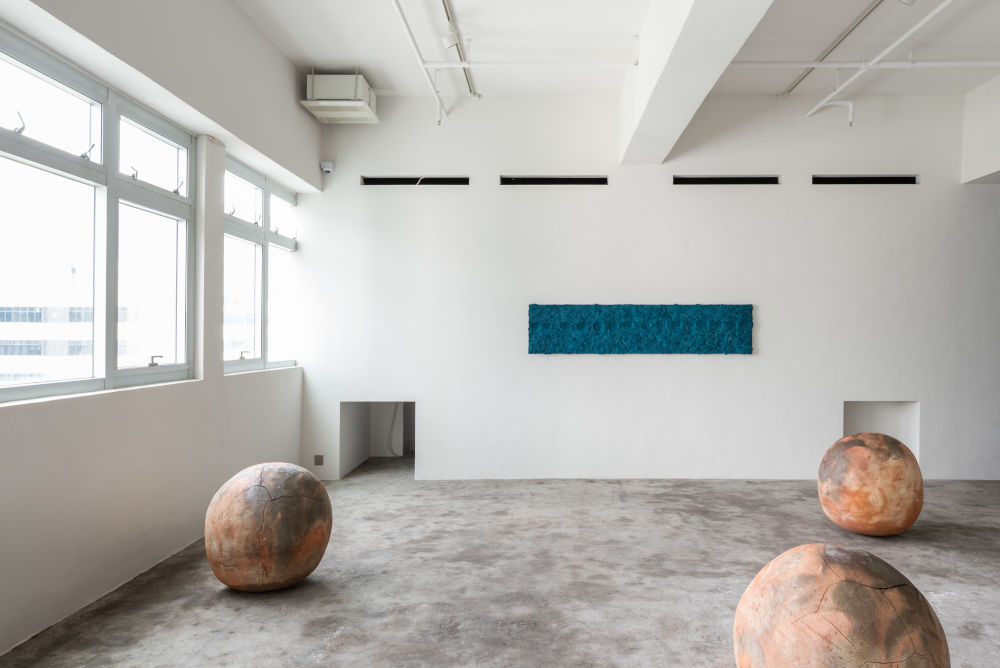 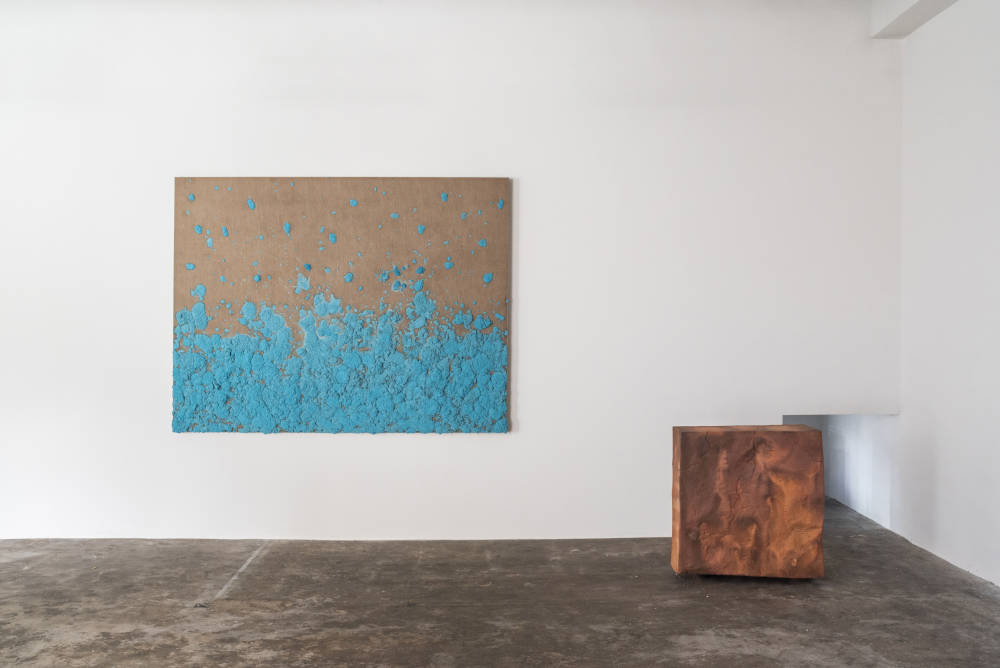 It’s the artist’s first solo show in Hong Kong and the Greater China region at large. In December 2019, Sodi spent two weeks in the city to create new works specifically exploring the depths and boundaries of the colour turquoise. During Sodi’s Hong Kong stay, the city’s geography, landscape, energy, and rhythm had an interesting influence on his practice and creation process. The artist states that local life added a unique depth and dimension to his work.

In addition to the new series of paintings, the gallery is presenting a selection of Sodi’s clay sculptures, created at the artist’s studio, Casa Wabi, in Oaxaca, Mexico. There, he extracts raw earth from the ground and combines it with water and sand to form clay. He uses this elemental material, embedded with ancestral significance, to create minimalist sculptures. Once cured, the clay sculptures are fired in a traditional brick kiln with wood, jacaranda seeds, and coconut shells, a process that imbues the sculptures with varied terracotta hues, streaks of green and black, and a multitude of fissures in the surface, giving each cube a unique identity.

The following text is an excerpt of a full essay, “The Elemental Process”, written on occasion of this exhibition by H.G. Masters:

“The turquoise pigments that Bosco Sodi used as the basis for his new paintings produced at Axel Vervoordt Gallery in Hong Kong were inspired by the colours used in Wang Ximeng’s twelve-meter-long landscape, “A Thousand Li of Rivers and Mountains”, painted over the course of six months in the year 1113 CE when the artist was just eighteen years old. Though he lived only until he was twenty-three, Wang was mentored by Emperor Huizong (1082–1135) of the Northern Song Dynasty, who himself was a talented painter and calligrapher, and his massive painting marked the apogee of a style known as “blue-and-green” painting, which was produced with malachite green and azurite blue.

In classical Chinese landscape painting (shan shui), the relationship between the artist and their subject is conditioned by a unique set of cultural parameters that although distant in time and culture, have survived in text and spirit. The court painters of a millennium ago were influenced by the beliefs and practices of neo-Confucianism and Chan Buddhism, the latter a hybrid of a migrant South Asian Buddhism and indigenous Taoism. As curator Maxwell K. Hearn concisely explains, during the years 900 and 1100 CE in the Song Dynasty, “Chinese painters created visions of the landscape that ‘depict the vastness and multiplicity of creation itself.’ Viewers of these works are meant to identify with the human figures in the painting, to ‘travel . . . dwell or ramble’ in the landscape.”[1]

Wang Ximeng’s incredible painting, a panoramic view across seas between five intricate landmasses, metaphorically represents not only the dynastic stability of the time but is acclaimed by viewers ever since its creation for its sense of placidity conveyed through its composition, perspective, and technique. A representation of the world, in other words, unfolds as the intricate geography of emotion and a metaphorical journey through life’s travails punctuated by moments of human sociability.

Bosco Sodi’s works with paint can resemble many things in the cultural context of today’s scopic technology — from microscopic images to aerial perspectives on the landscape — but they don’t mean anything specific in themselves. They are definitely, and defiantly, marks of a human but not necessarily a particular one with a delineated biographical narrative. Instead, the figure of the artist is more universal, less individualised, visible to us as a single person manipulating materials to an aesthetic end — and here capitalising on the intrinsic and anciently recognised beauty of turquoise and clay. What he channels and confronts, from kinetic forces to the universal centering effects of gravity, represent elemental forces of chaos and order, and becomes a cosmological metaphor, deeply of the world while also apart from its many manifestations.

“I try to avoid as much reality as possible
so that the work is completely spontaneous.”

Sodi’s works are a nexus of the elemental — in terms of their physical materials and abstract concepts from which they are composed, and the universal forces and natural phenomenon that shape their creation and maturation over time. In these ways, Sodi’s creations lie outside the representations of our society today, like a Chinese literati poet-painter whose ambitions were to satisfy the inner heart. Yet Sodi’s works also represent an activity whose motivation, or meaning, remains locked inside itself, leaving us only with its external manifestation in the moment before us.”

H.G. Masters is a writer & editor at ArtAsiaPacific magazine.

Bosco Sodi is known for bold, richly textured works that burst with colour and materiality. The artist’s visual language transcends conceptual barriers. His paintings, or sculptural objects as the artist himself calls them, appear to be carved from the earth itself. The dense materiality of his work is made by using a combination of raw, monochrome pigments mixed with sawdust, pulp, natural fibres, and glue that are combined layer after layer and allowed to dry, crack, and evolve. Sodi’s work is informed by the Wabi-sabi worldview of aesthetics where beauty is expressed in imperfection, transience and simplicity.