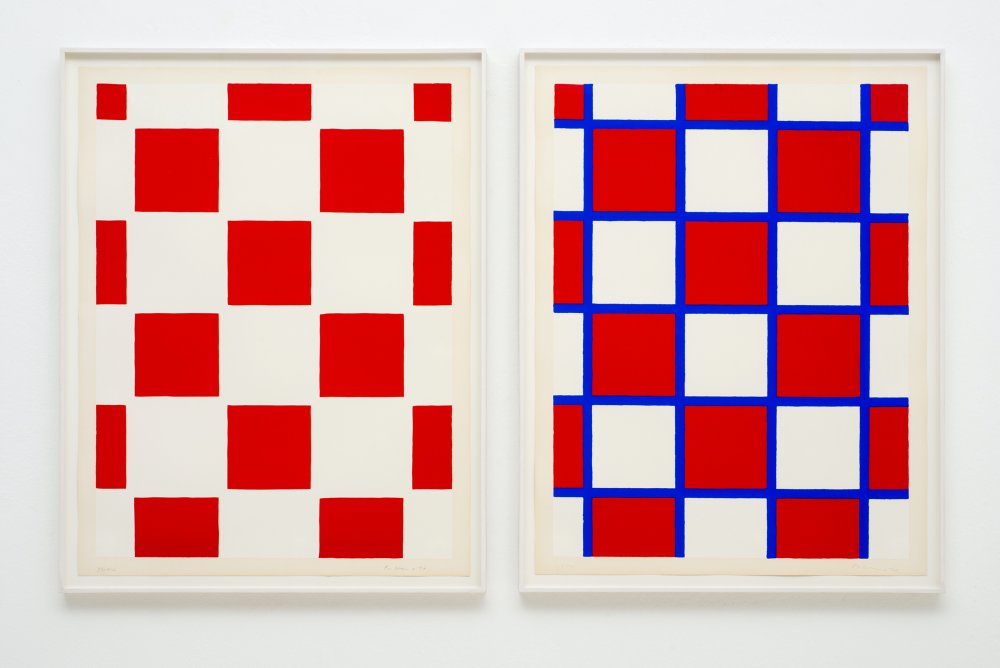 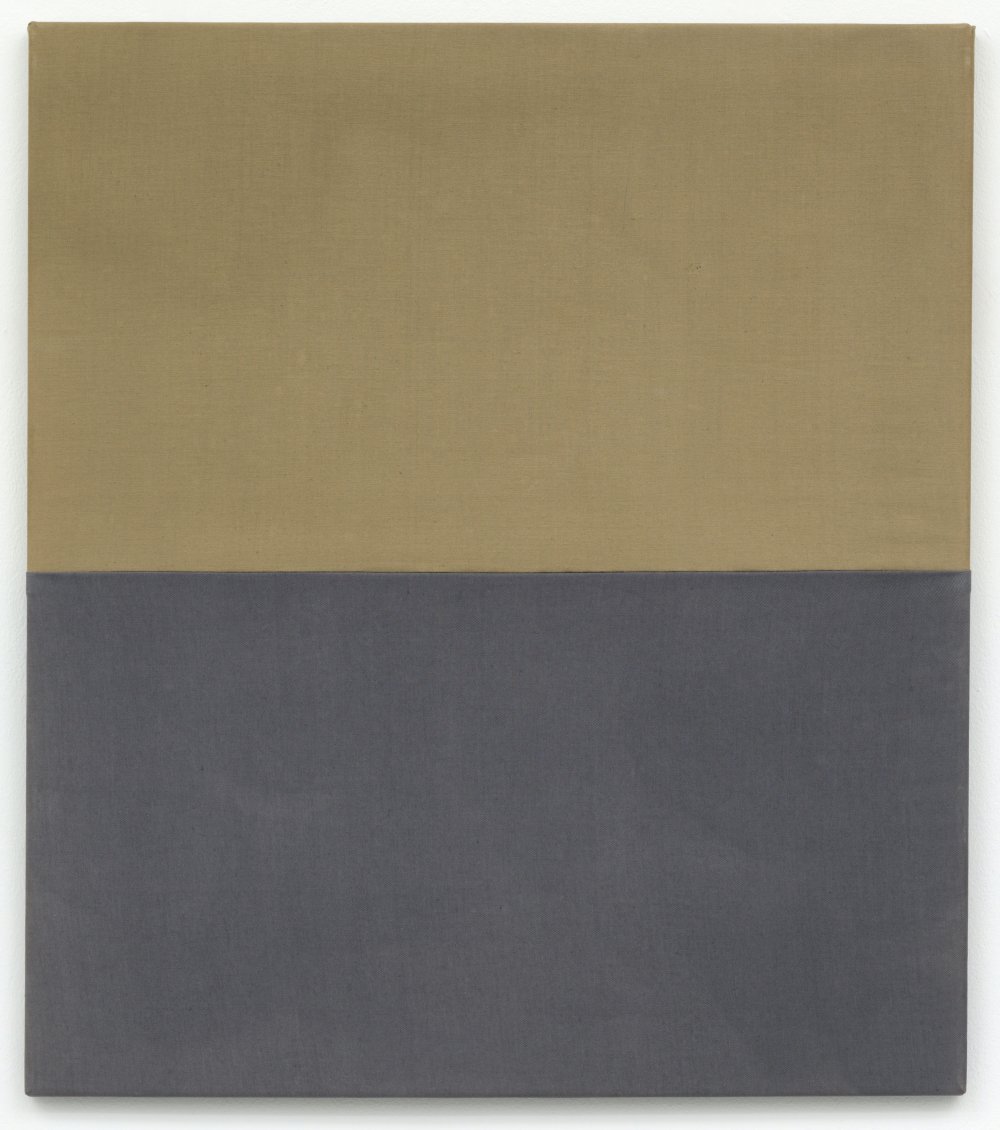 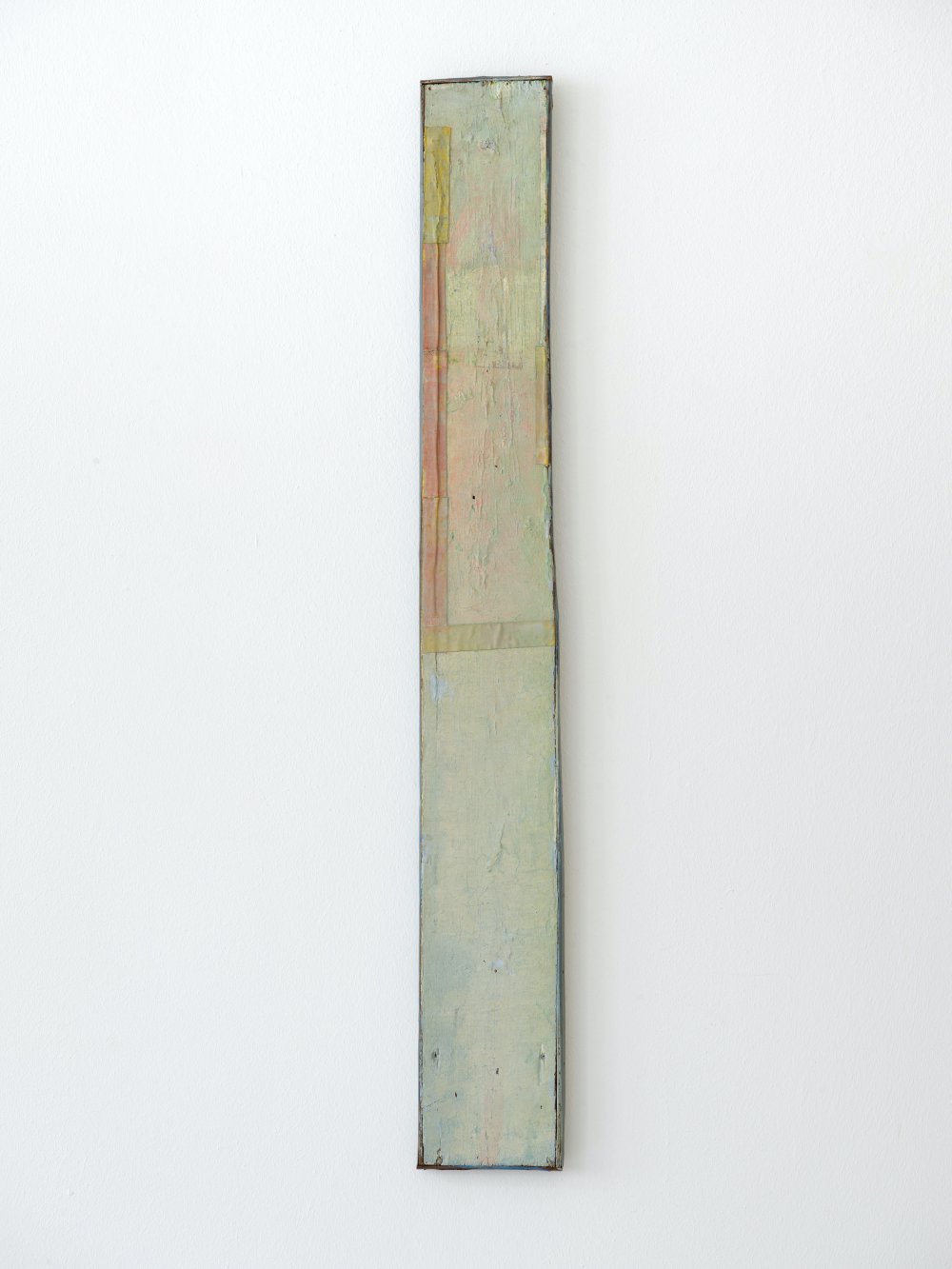 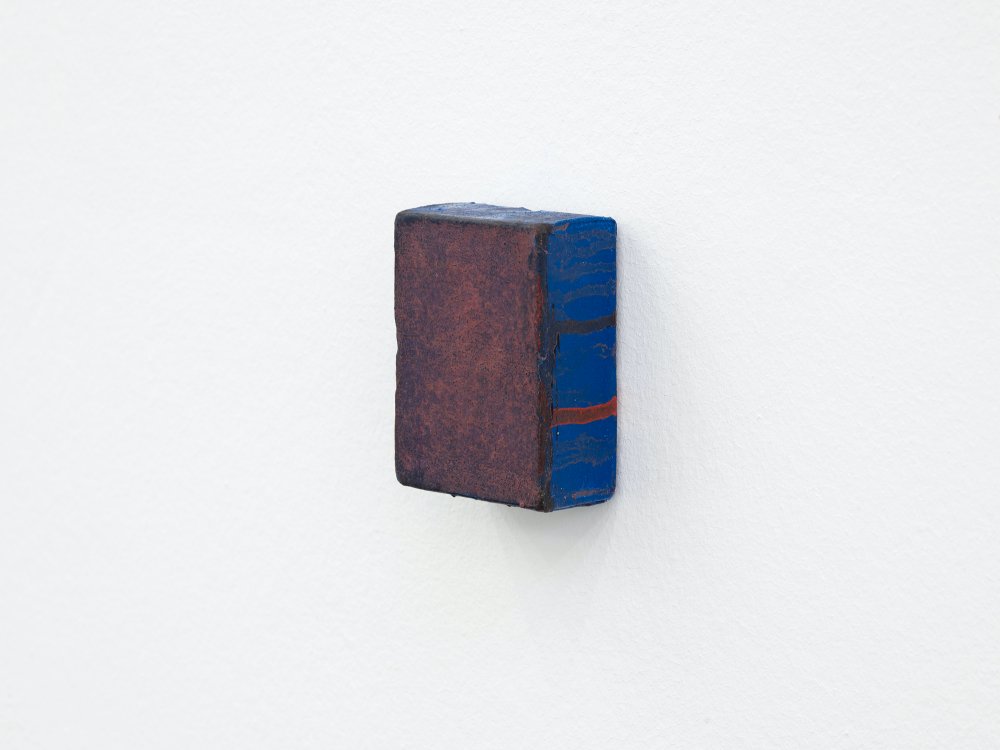 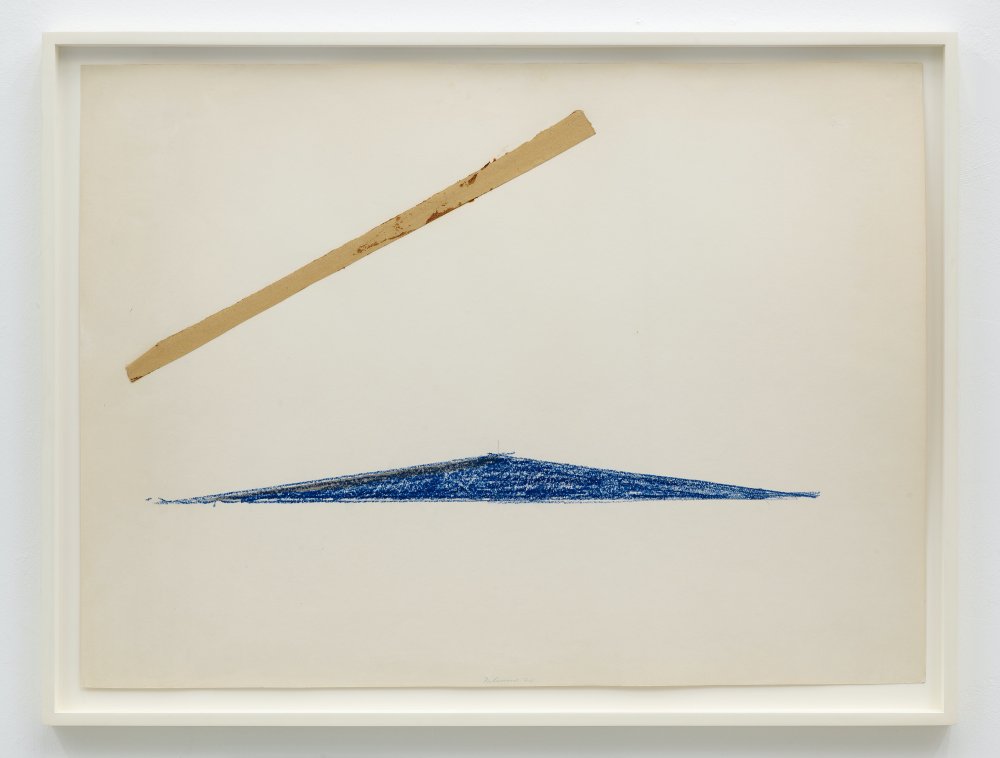 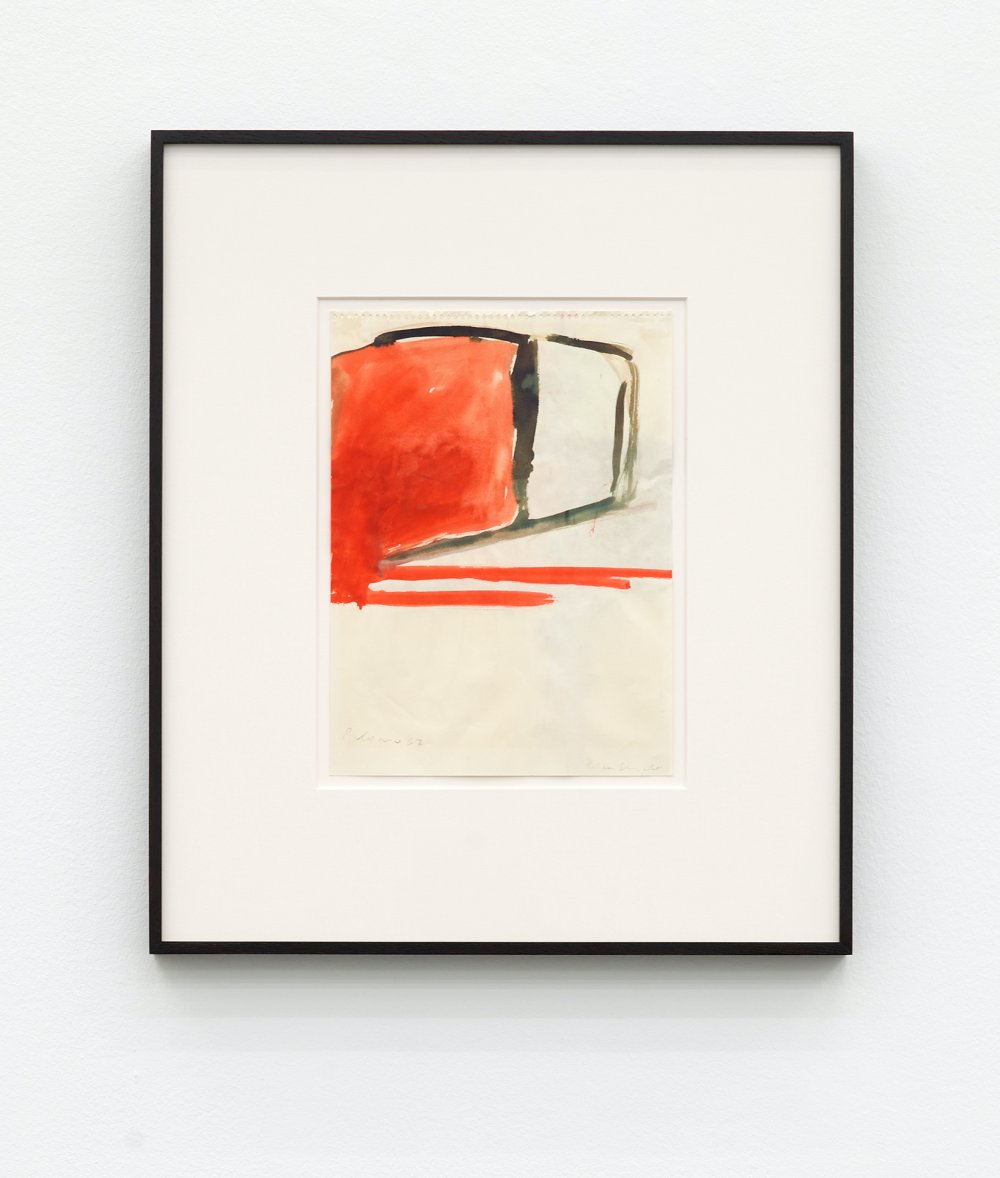 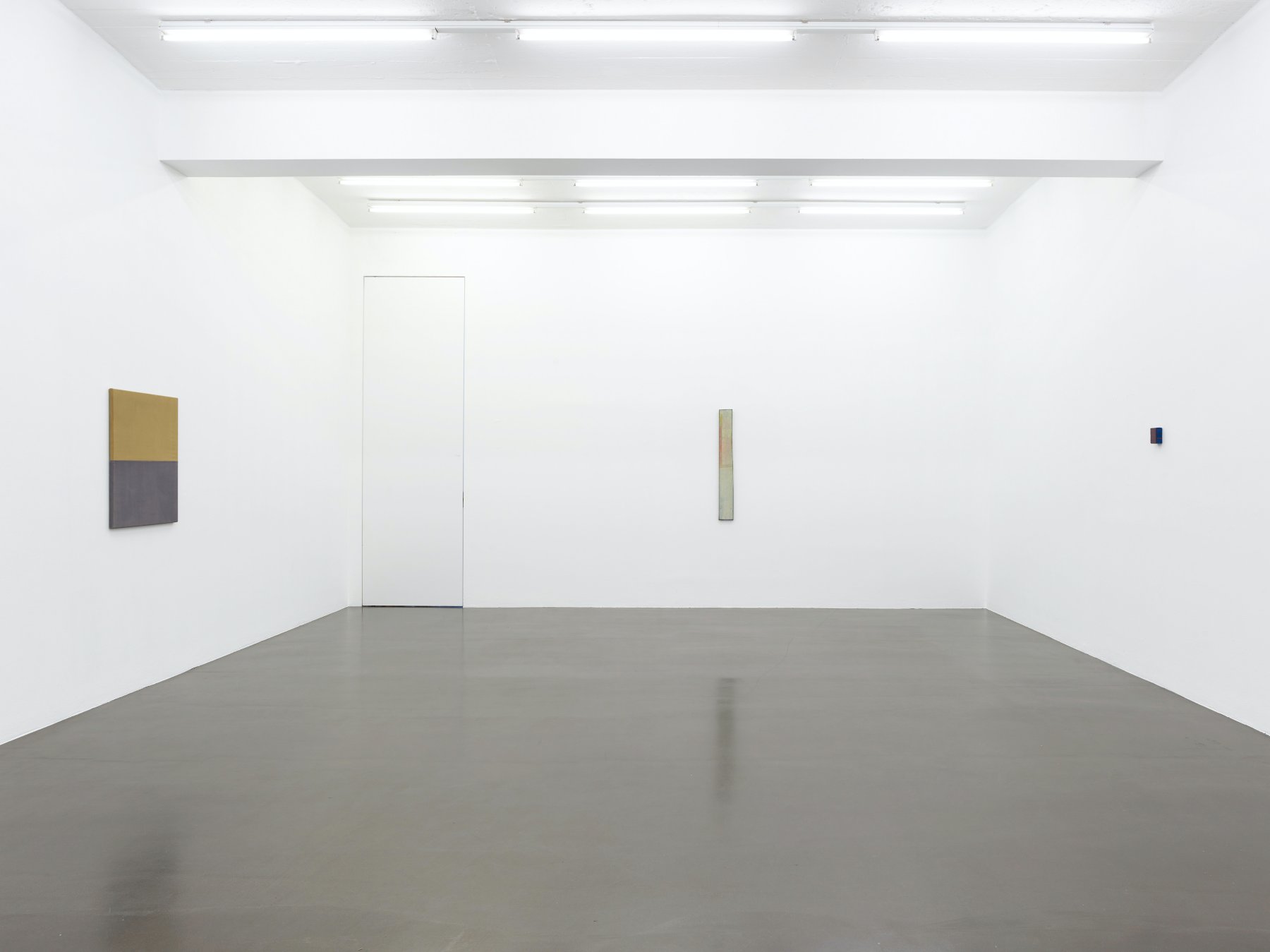 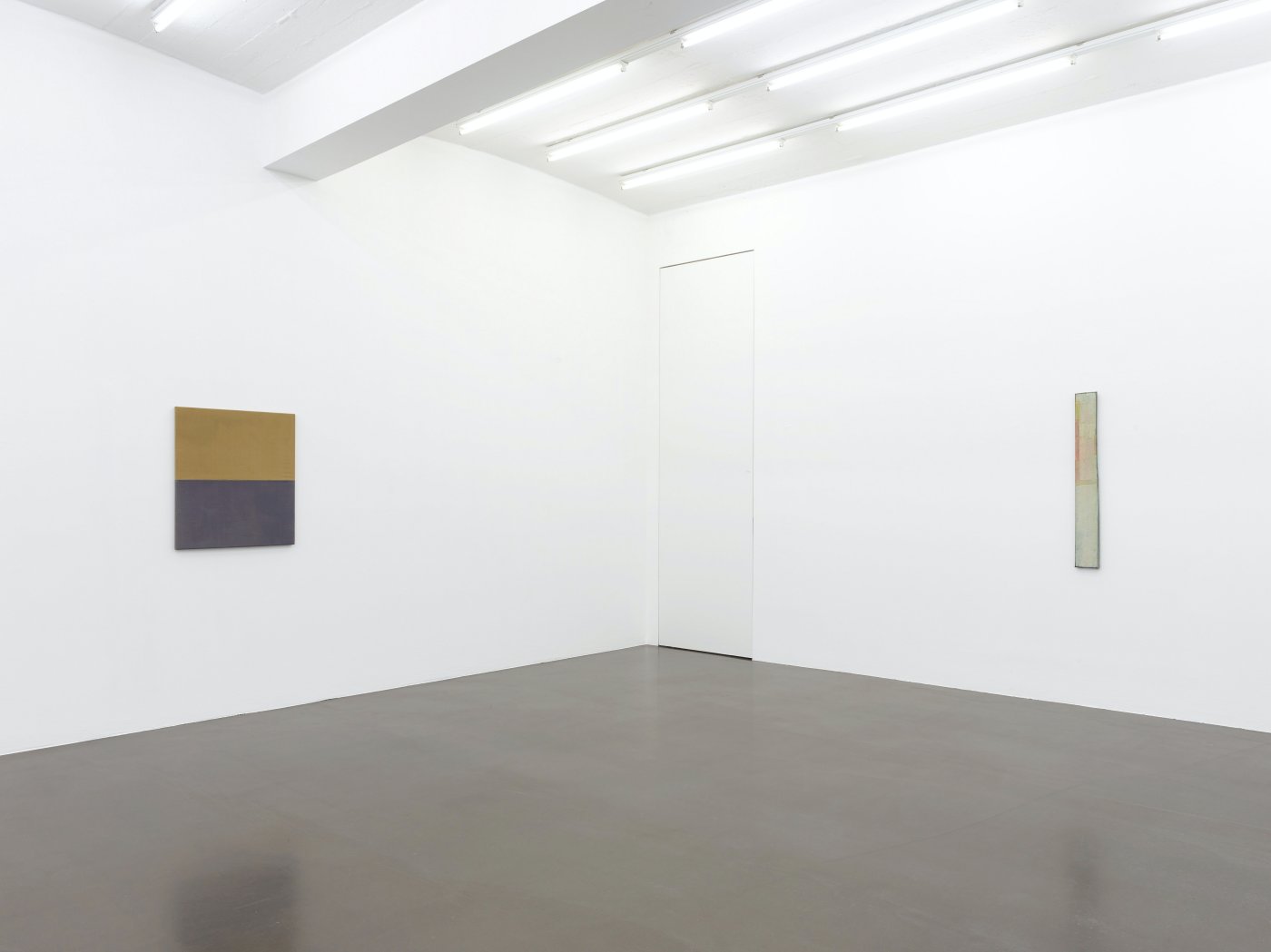 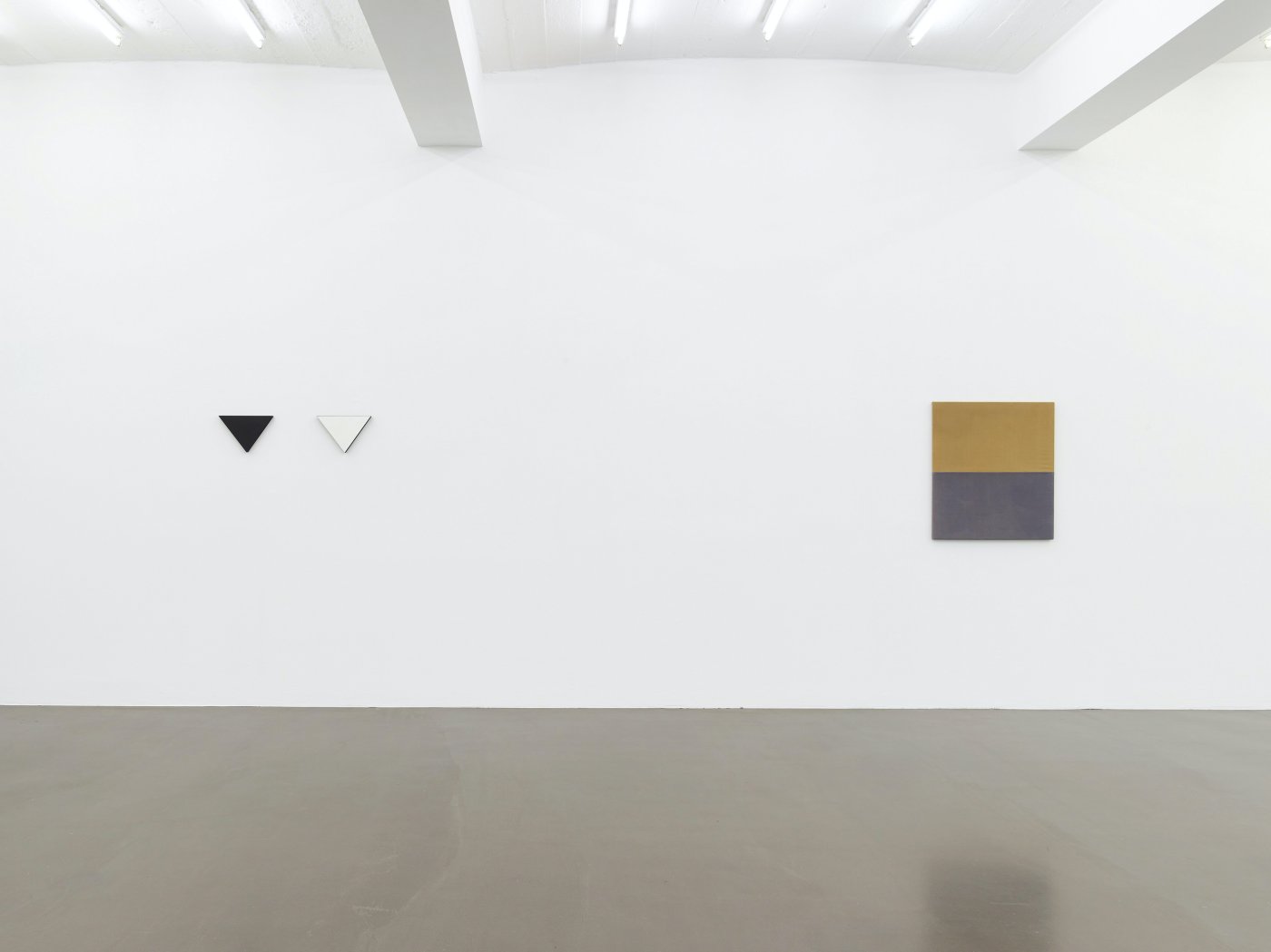 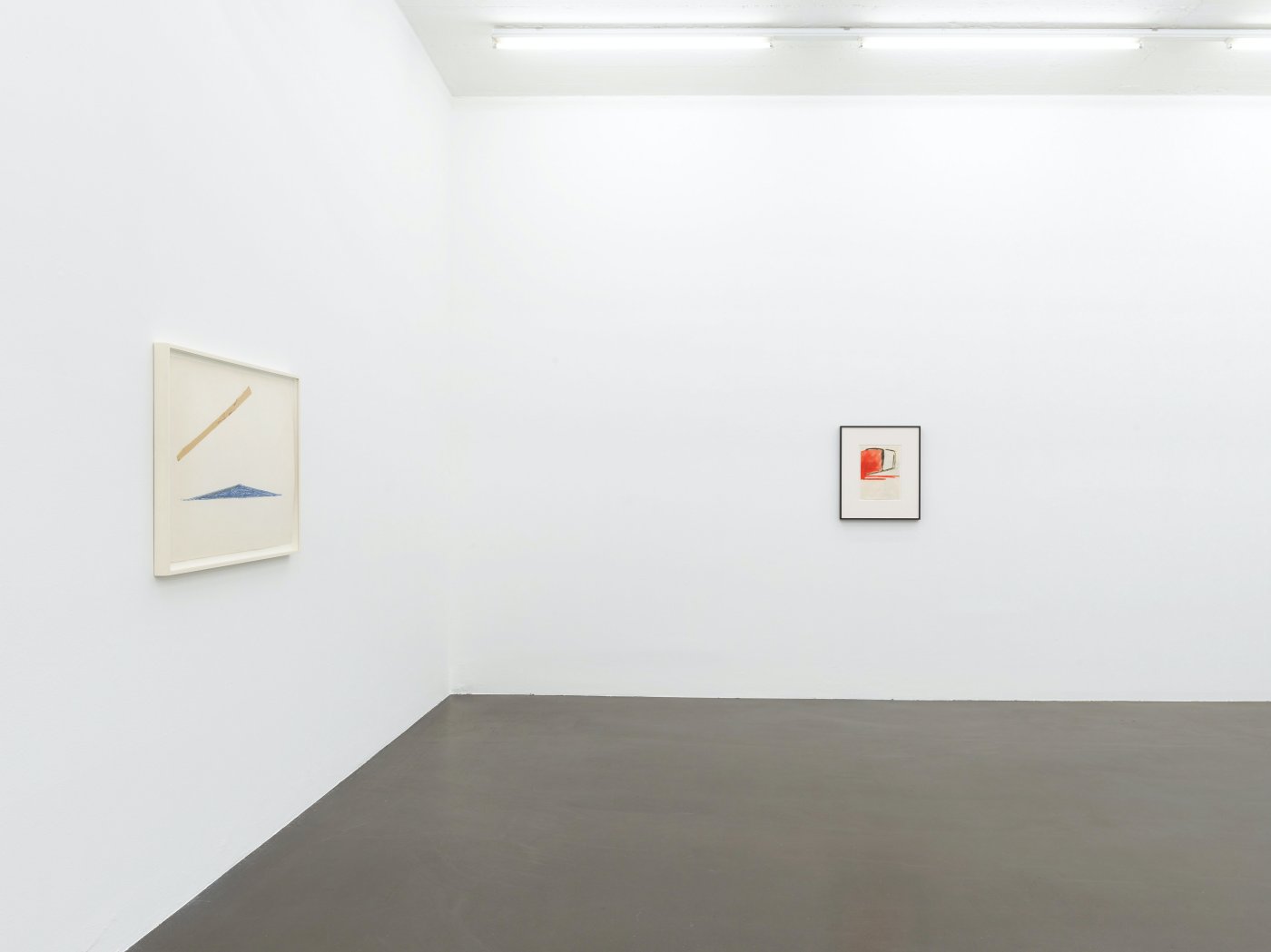 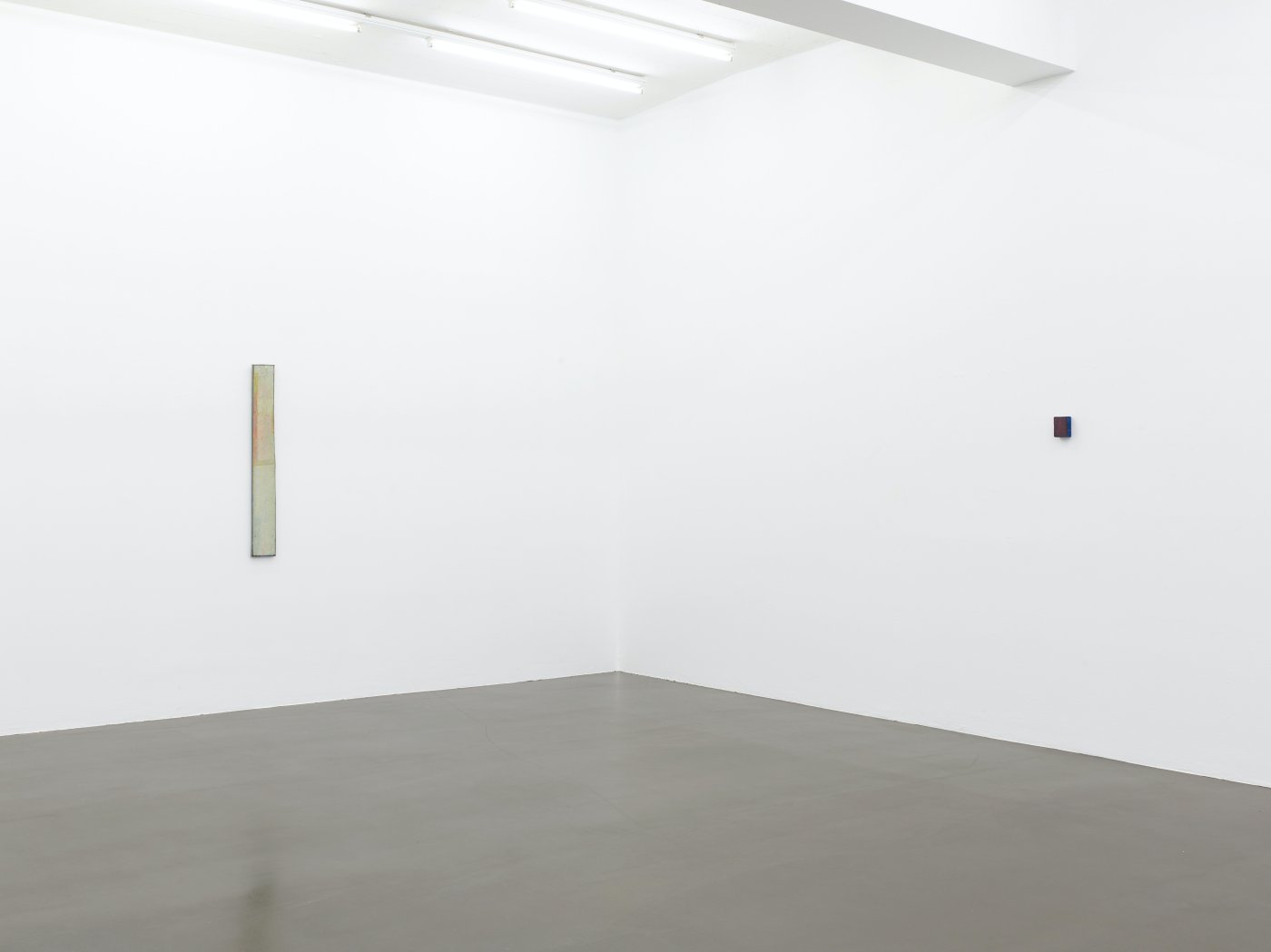 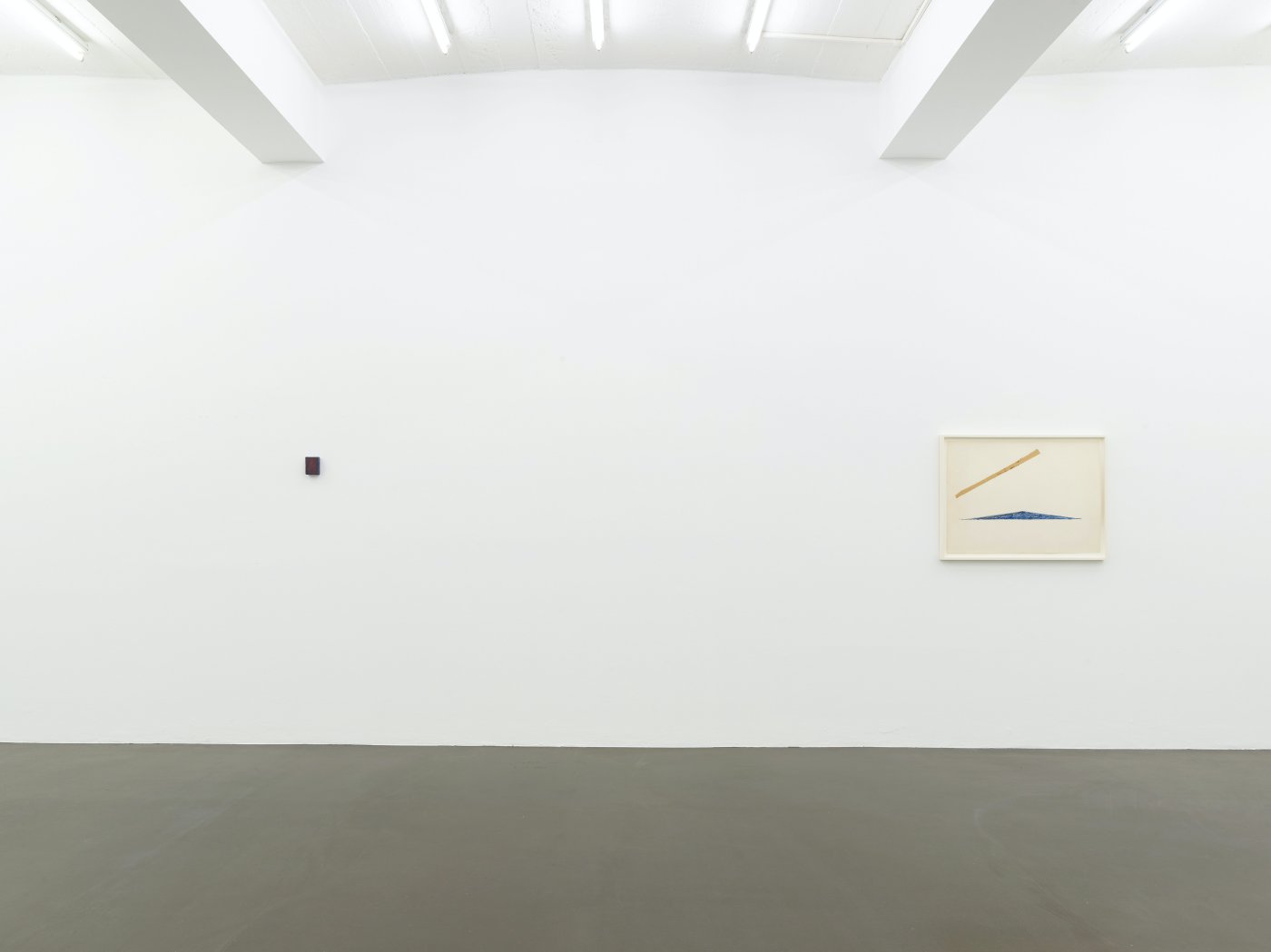 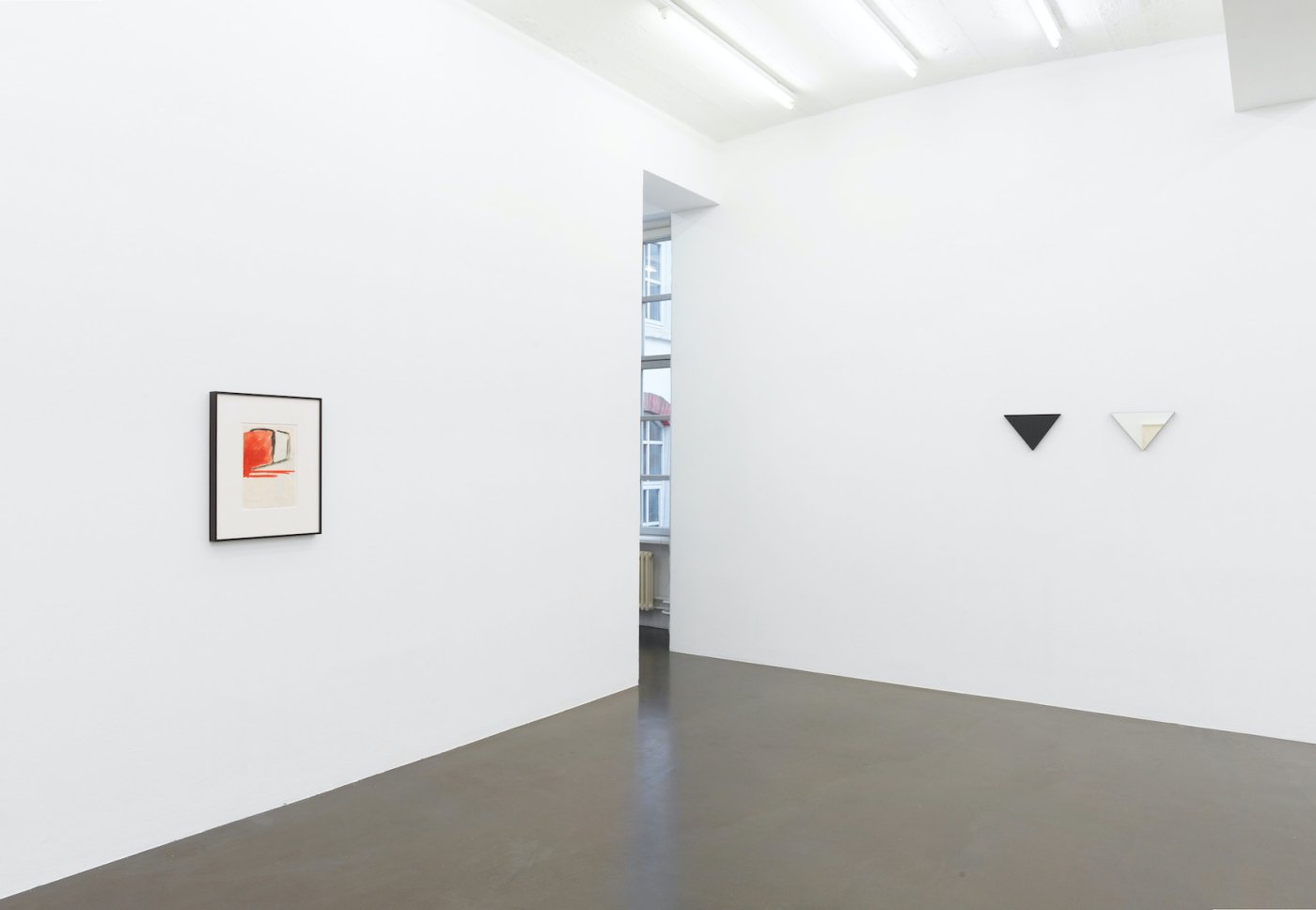 Blinky Palermo (1943-1977) is a myth, a tragic cult figure who died far too soon – but above all he is an artist who was so far ahead of his time that his work still resonates today, perhaps more so than ever. Palermo’s oeuvre can be described as a more subdued and tender European version of Minimal Art and colour field painting, but for the Beuys student there was one thing above all: the search for himself. On the Maldives, where he had travelled after his last love, it came to an end. Blinky Palermo died as he had lived: intense and full of unfulfilled longing.

Palermo’s work, which engages in nothing less than the tradition of geometric abstraction, is much more reduced and reflected than he was. It is full of triangles and squares as well as monochrome surfaces and objects sitting on walls in the form of fabric, wood or metal as spatial calculations of point and line to surface – themes that were brought into the present with classical modernism and brought to perfection in New York. So Palermo, one might think, actually came a little too late. But what he does is different from the art of his predecessors. His work is more mischievous and melancholic than the canvases of Malevich, Mondrian and Kandinsky, impregnated as they are with theory and theosophy. It is smaller than Barnett Newman, grubbier than Donald Judd, more smug than Brice Marden and warmer than Ellsworth Kelly. Palermo looks at the world and art and transforms what he sees into a geometric dream web: staircases and skyscrapers, pinball machines, heaven and earth, butterflies, the blue flower. A mirrored triangle with a black twin looks like nightlife with jazz music to him, a board painted over several times like a wounded soul. It is an abstraction that does not deny the narrative, but embeds the graphically formed present in a longing that can only be called romantic.

Palermo, who was born in Leipzig and grew up with his twin brother in Münster with adoptive parents, studied at the Düsseldorf Academy of Art with Sigmar Polke, Gerhard Richter, Imi Knoebel and Ulrich Rückriem. But Joseph Beuys remained his mentor. The fact that he moved to New York in 1973 therefore seems like a conscious detachment. In the meantime, he had taken part in Harald Szeemann’s documenta 5, soon followed by an invitation to the 37th Venice Biennale. When Imi Knoebel comes to stay with him, both visit the Rothko Chapel in Houston and Michael Heizer’s Double Negative in the Nevada desert. It is this abstract sky from which Palermo’s art shoots out like a shooting star. He doesn’t know it yet, but it is the attitude in which he retells the history of modern painting in his nonchalant manner, cheekily appropriating its previous achievements in order to inscribe a playful, dreamy note on it, which makes later generations of artists, from Günther Förg to Ceal Floyer, admirers of Palermo. The unquenchable thirst for life, which becomes a quiet smile in his work, is groundbreaking for the conceptually encoded search for an own identity and for localisation within the world, as is taken for granted in contemporary art today. No one has quite mastered the tightrope walk between humour and vision, audacity and elegance, quotation and self-determination as Palermo has.

At the beginning of 1976 he returned to Düsseldorf and followed his new girlfriend to the small Maldives island of Kurumba. Nobody knows exactly what happened here. Only that his companion suddenly finds a lifeless body in the accommodation. Under the Indian Ocean sky, far from any home, Blinky Palermo’s star has burnt out. But his art still shines the way for all those who seek poetry and infinity in minimalism.

Based on the text by Gesine Borcherdt in the catalogue published for the exhibition.

ABOUT THE ARTIST
Blinky Palermo was born as Peter Schwarze in Leipzig in 1943. During his time at the Düsseldorf Art Academy he adopted the pseudonym Palermo, with which he also signed his works. The name refers to the Italian- American mafioso and box promoter Sonny Liston. The nickname Blinky was only common among friends.

Selected important solo exhibitions were held at the Museum Abteiberg Mönchengladbach (1973), the Museum Schloss Morsbroich, Leverkusen (1975), the Haus der Kunst, Munich (1980), the Kunst-museum Bonn (1981), the Biennale of São Paulo (1975), the Kunstmuseum Winterthur (1984); the Centre Georges Pompidou, Paris (1985); in The Menil Collection, Houston (1989); the MMK Museum für Moderne Kunst Frankfurt (1990); the Museum der Bildenden Künste, Leipzig (1993); the Kunstmuseum Bonn (1994-1995); the MACBA Museu d’Art Contemporani de Barcelona (2002-2003) and the Serpentine Gallery, London (2003). The Kunsthalle Düsseldorf and the Kunstverein für die Rheinlande und Westfalen presented a comprehensive solo exhibition in Germany (2007-2008). The Dia Art Foundation in New York organized a retrospective (2010-11) together with the Center for Curatorial Studies and Bard College (CCS Bard) in New York. The Westfälische Landesmuseum für Kunst und Kulturgeschichte in Münster and the Kunstmuseum St. Gallen conceived the exhibition entitled Palermo: Who knows the beginning and who knows the end? (2011). The Dia Art Foundation Chelsea presented the solo exhibition To the People of New York City (2018-2019) in New York. This year, the exhibition The complete Editions – Donation Ulrich Reininghaus was shown at Museum Ludwig in Cologne.