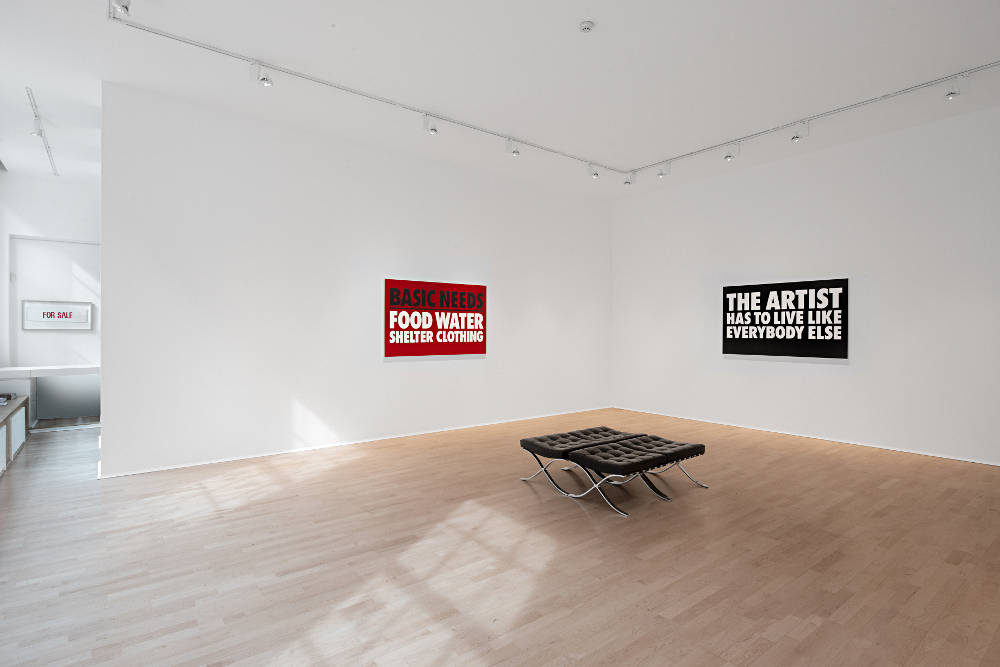 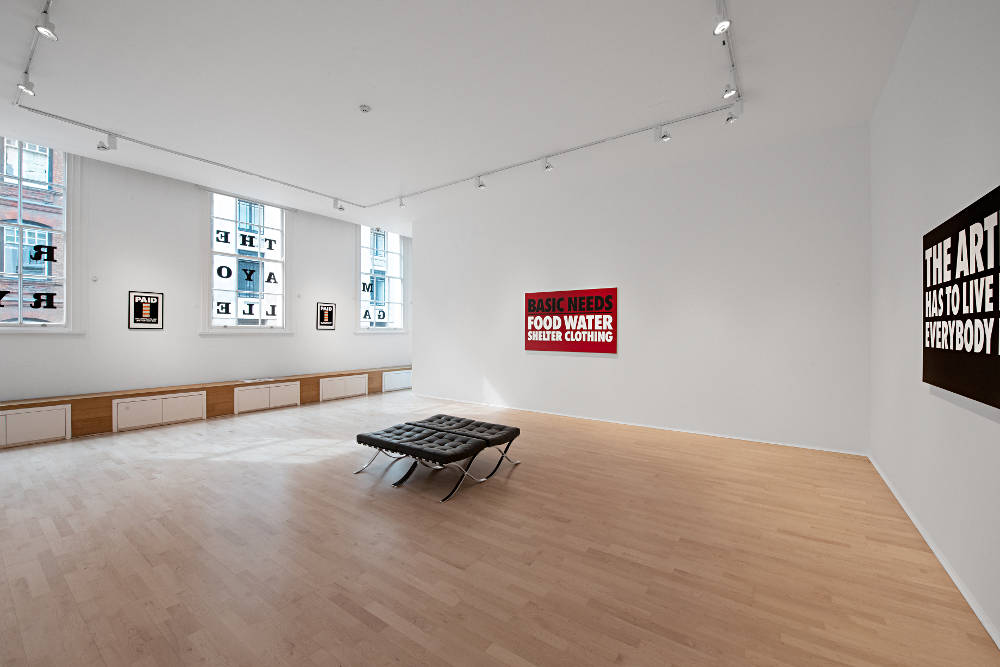 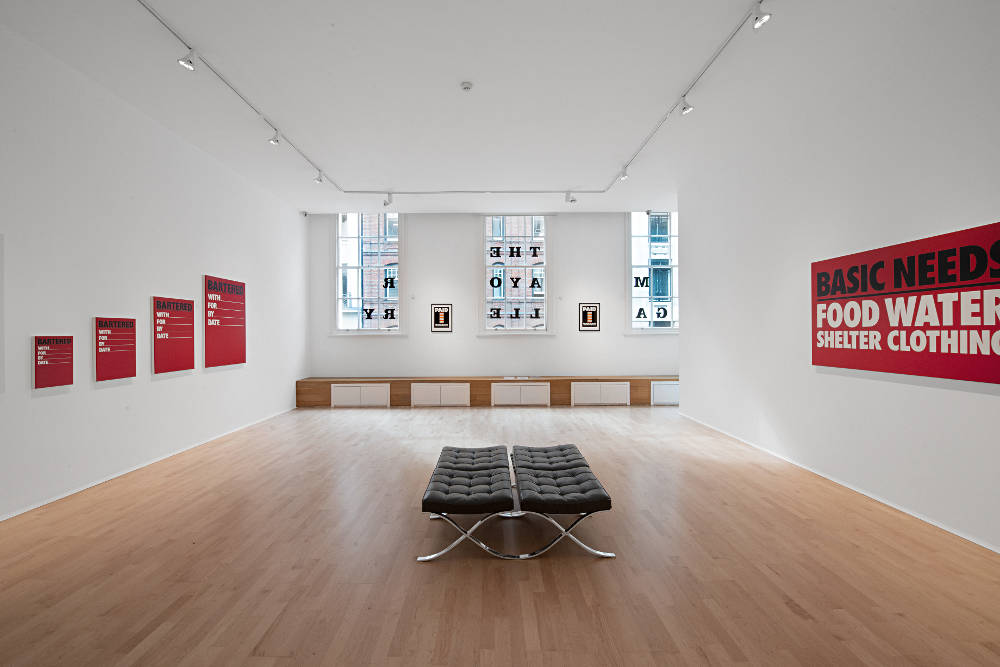 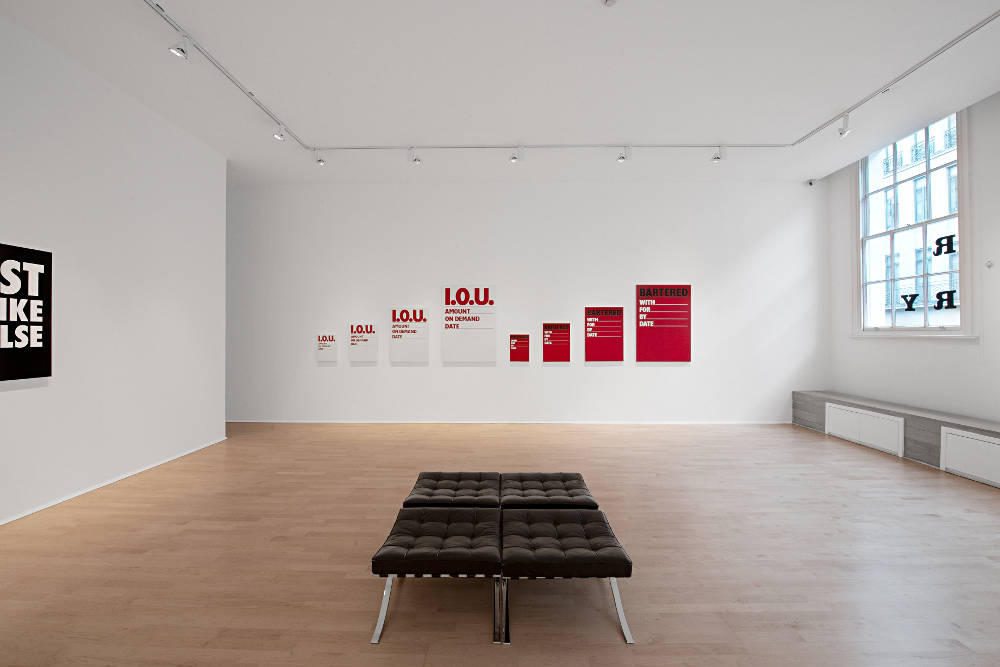 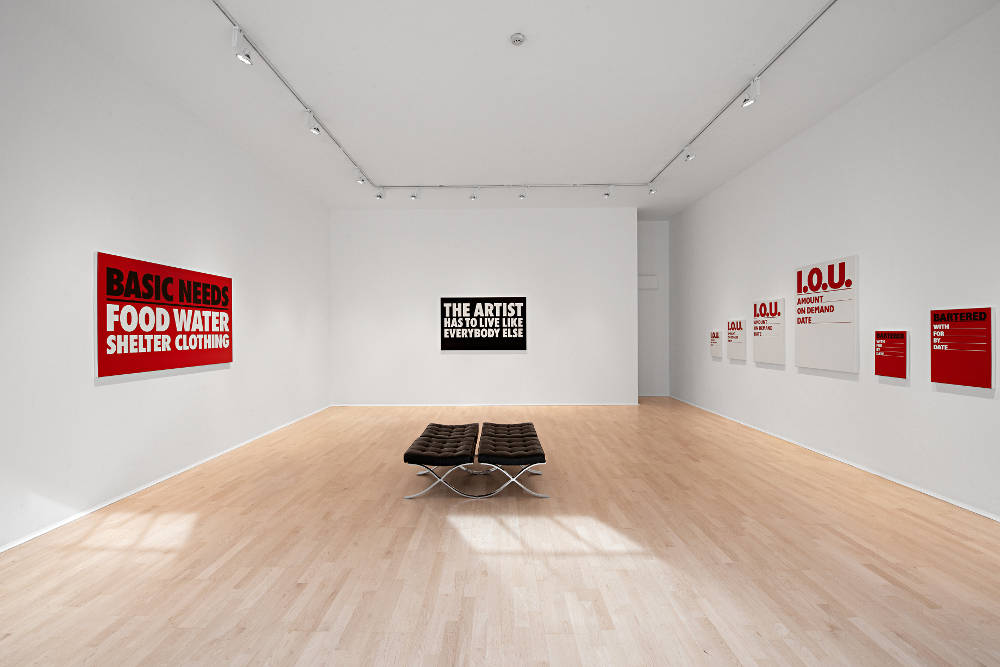 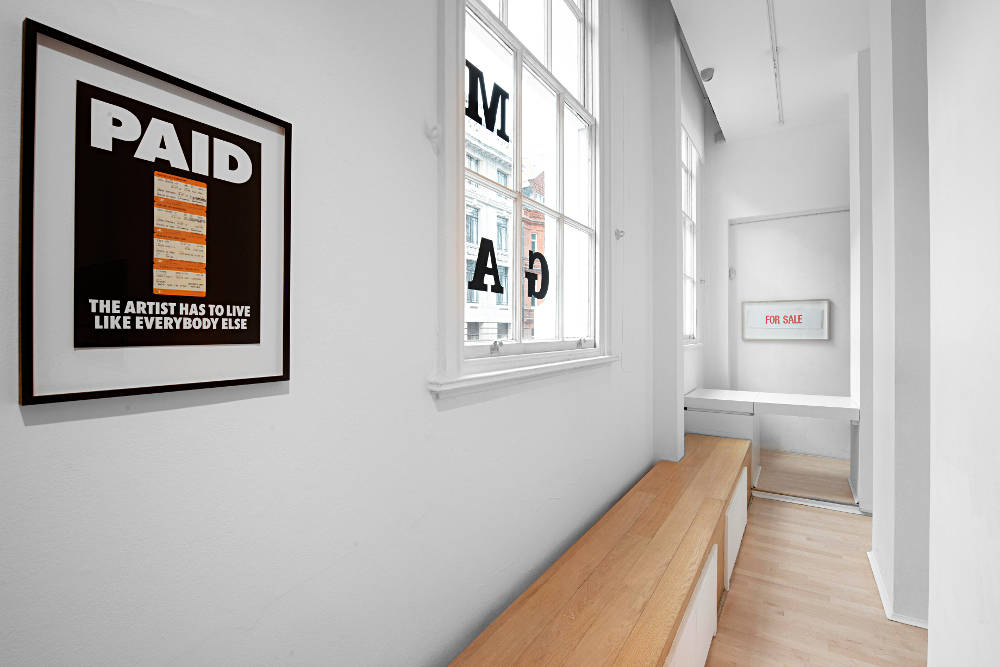 His jaunty pop art painted bronzes, offset photo-lithography, xerography and neon works, which challenged the prevailing ideas and material traditions of 1960s fine arts, were reintroduced to London; the next exhibition documented his shift to a thoroughly de-materialized art practice presented variously in a series of aesthetically cleansing art-life and site-specific subtractions and eliminations.

In Billy Apple®: The Artist Has to Live like Everybody Else 1961­ ­– 2018 his practice moves forward to focus on Art Transactions, a new series begun in the early 1980s that reveals Apple’s art-life tactics for everyday living and more broadly examines the means by which art circulates and the network of relationships between collector, dealer and artist. This series has its roots in the small canvas For Sale, 1961 now in the National Galleries of Scotland collection ­– the signifier which signals Apple’s nascent interest in the implications of brand identity and the commodification of art.

In 1984 Billy Apple showed Leo Castelli a new text-based work, a Promissory Note headed up with I.O.U., next line AMOUNT then ON DEMAND, finishing up with space for a date and signature. Castelli labeled Apple’s work as “pop-conceptual”, arguably the first use of the term, but replied “Billy! We don’t borrow money.” Apple went on to develop his Promissory Notes scaled using the A-paper system which is in effect Apple’s private currency that stands outside the rules and regulations of governmental and banking controls. The term ‘on demand’ moves the works from being a simple I.O.U. to a non-taxable form of financial currency. In contrast to the discounted (because of the effects of inflation) face-value sale of a promissory note, Apple’s I.O.U.s rise in value in accordance with the perceived worth of his art.

The exhibition also includes un-transacted Barters, another series that is a form of aesthetic currency which shortcuts the usual steps in our everyday economy. The artist negotiates or barters with collectors who become invested in the maintenance of his art, life and well-being. For individualised Barters, Apple arranges for the exchange of goods like honey, coffee, café lunches or services with professionals for haircuts, cardiac stents, optometry, hernia repair and hip replacements. Zoë Grey, then curator at the Witte de With, Rotterdam in 2009 wrote, ‘I.O.U. and Bartered are – as the artist puts it – ‘propositions in waiting’, whose exchange value and destination are yet to be decided. They were made…at the boom of the (1980s) art market…In the face of the recent and ongoing economic crisis, these works have a new relevance, but perhaps their original bravado is now replaced by something closer to anxiety.’

The on-going series, PAID: The Artist has to Live like Everybody Else developed from a 1984 project based on the breakdown of cost-of-living statistics which answered the question – How much money does the artist need to live for a year? Invoices from Apple’s daily life are chosen by collectors, paid for and mounted on Apple’s PAID document. Collectively, they profile the life of the artist in the form of a paper portrait of invoices.

In 2015, curator and Apple biographer, Christina Barton, wrote ‘his Art Transactions carry over the graphic identity that had evolved in the printed matter that accompanied his site-based alterations and subtractions. Now, rather than ancillary announcements or documentation, text and work merge with a cool authority that bears little resemblance to the ‘wild’ paintings that were capturing the attention of the art world. Apple tackles head on the various ways in which works of art can function as a form of currency. But his real subject is the extent to which we are willing to believe in the idea of art’s intrinsic value. By so clearly extending an invitation to his audience to engage in an exchange, Apple’s transactions exist as documents of a mutual trust; they remind us of our shared investment in art’s deeper worth.’

Basic Needs, 2014 is part inventory, part signifier sourced from the United Nations list of basic human needs. It was initially produced for e-flux’s global benefit art auction curated by Hito Steyerl and Anton Vidokle for displaced Kobanê refugees and via them then director of Artspace, Auckand, Misal Adnan Yildiz invited Apple to contribute. Basic Needs has since been translated into five languages in 2018 for Mutterzunge: Seeing and Hearing curated by Yildiz for Apartment Project, Berlin.

After graduating as one of the pop generation from the Royal College of Art, London in 1962, Apple moved across the Atlantic to New York and was curated into the groundbreaking American Supermarket, (Bianchini Gallery, 1964) then opened APPLE at 161 West 23rd Street, NYC, in 1969 the second of the seven not-for-profit spaces that established New York’s Conceptual Art movement. His contributions to the history of pop and conceptual art has been recognised internationally, with a major retrospective at the Auckland Art Gallery curated by Christina Barton; a two-part survey at Rotterdam’s esteemed Witte de With Center for Contemporary Art in 2009, his inclusion in International Pop, the 2013 Walker Art Center’s major survey of pop art and Queens Museum’s 1999 Global Conceptualism: Points of Origin 1950s-1980s. His works are to be found in major collections including Tate Britain, the Solomon R Guggenheim Museum, the National Galleries of Scotland and Te Papa Tongarewa Museum of New Zealand. He continues to exhibit regularly around the world, his most recent exhibition is Billy Apple®: Six Decades 1962 – 2018 curated by Christina Barton for Rossi & Rossi Hong Kong.

The exhibition is accompanied by a fully-illustrated publication that includes an essay by critic and journalist Anthony Byrt. Byrt is a regular contributor to Artforum International and New Zealand’s Metro Magazine. His first book This Model World: Travels to the Edge of Contemporary Art (2016) was a finalist in New Zealand’s premier book awards in 2017. He is currently working on a book about Apple’s time at London’s Royal College of Art, and the connections between Apple, David Hockney, Frank Bowling, Larry Rivers, and Apple’s lover at the time – the novelist Ann Quin.