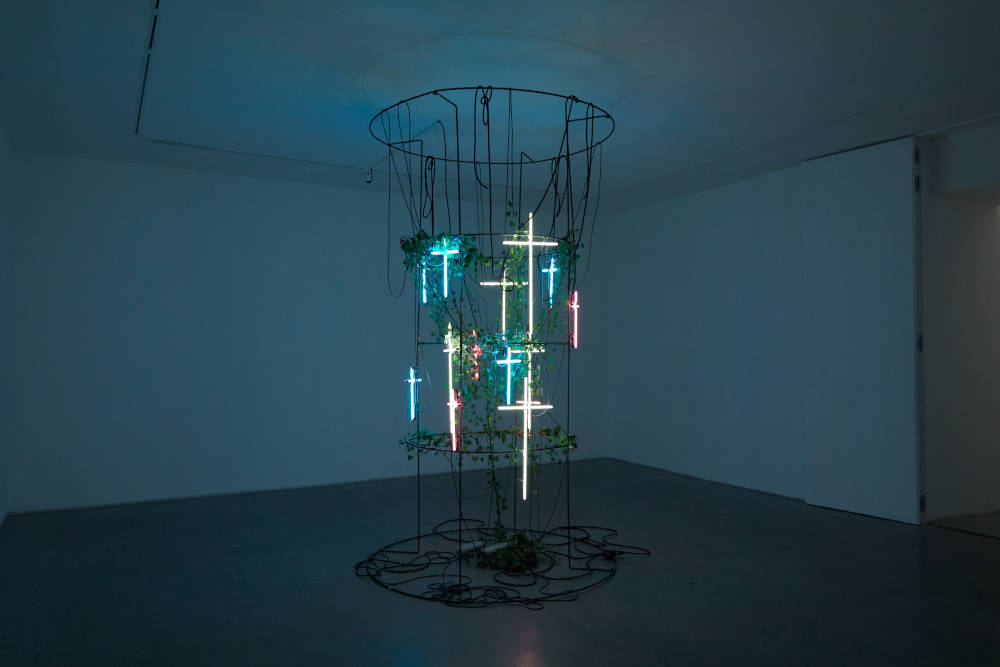 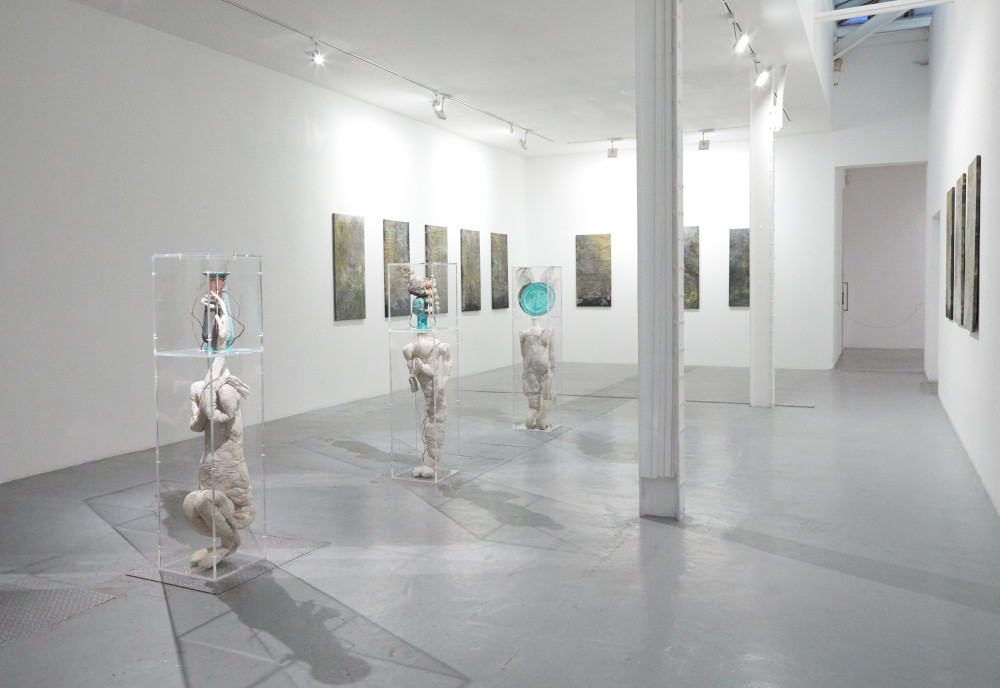 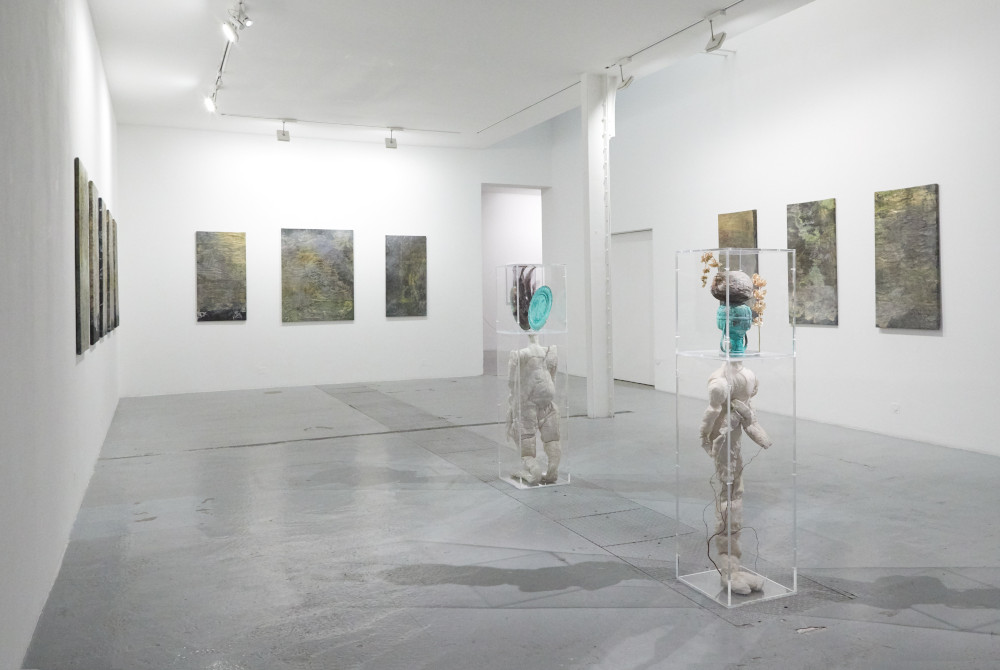 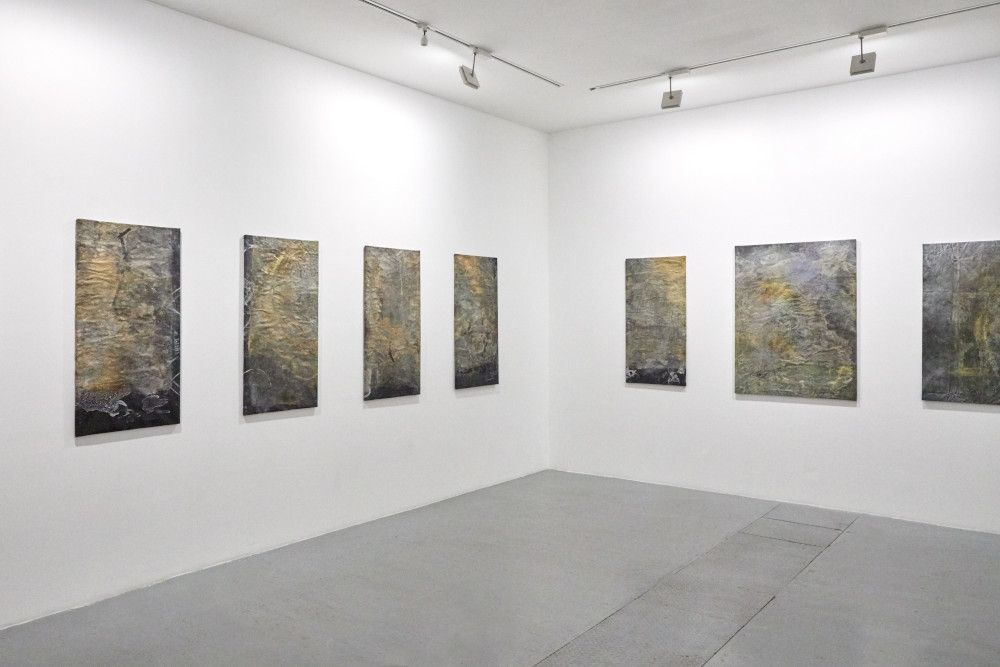 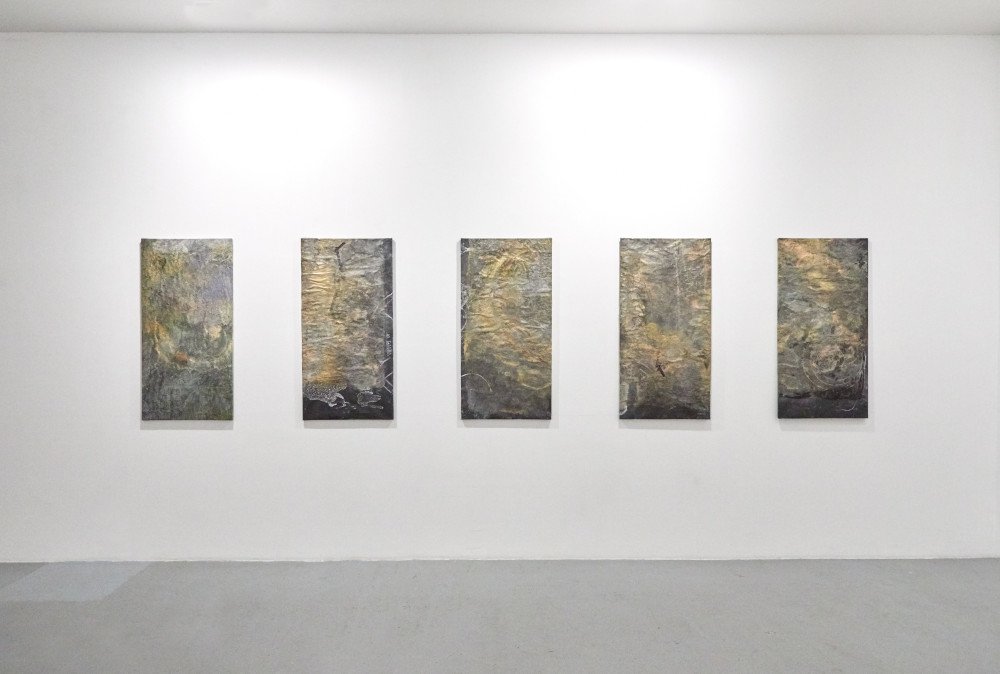 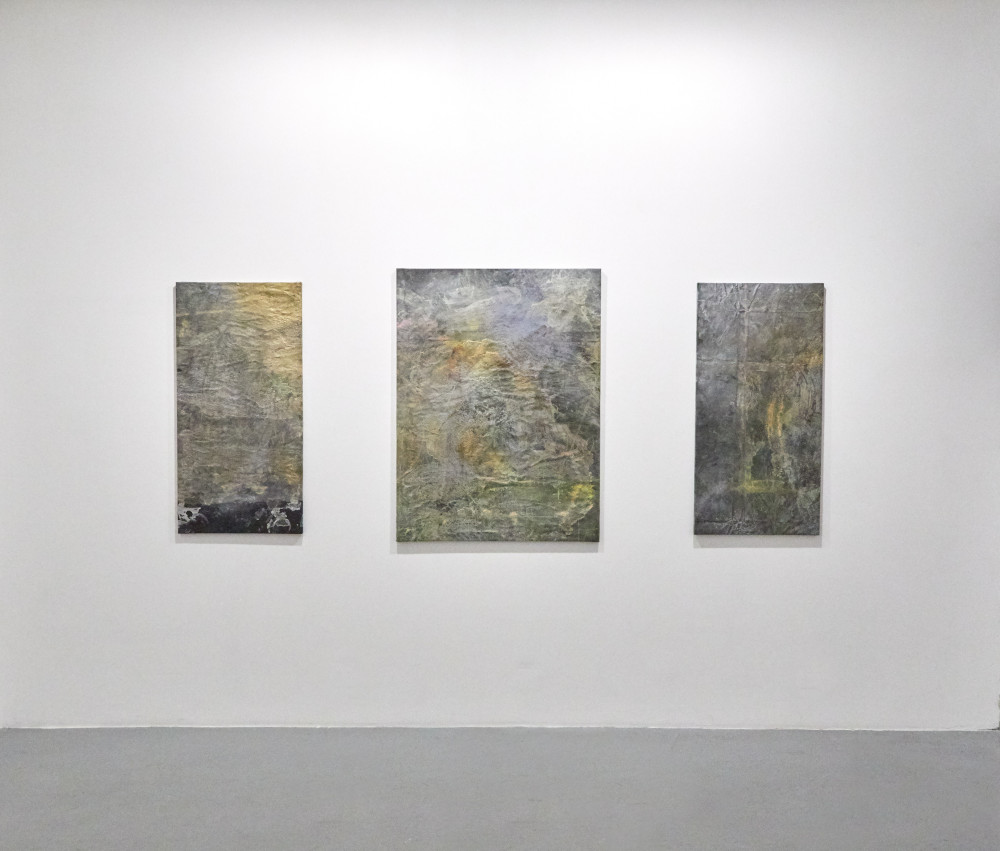 For her first personal exhibition at VNH Gallery, Bianca Bondi has chosen an enigmatic title, inspired by a scientific study that a particular moth’ species had developed the ability to drink the tears of sleeping birds(1). If nothing in the show directly illustrates this surprising observation, the choice of words however illustrates Bianca Bondi’s impulse to enrich her work with natural sciences and stories as well as religious culture, esoteric or magical. The movement of the bird’s tears when ingested by the moth correspond to a recurring analogy in the artist’s works: the idea of passage, the mutation of matter and its circulation.

The installation Have you accepted Christ as your personal savior…(2) occupies the first room of the exhibition. It presents luminous crosses of different sizes and colors, superimposed within the space, their power supply cables drawing a network of veins connecting the earth to the sky. Vine plants, notably ivy, occupy the base of the installation. The idea of this piece came to her following the burning of Notre-Dame. In the artist’s experience of the event it isn’t so much about the destruction of an emblematic monument, but rather a rare moment of collective consciousness and the pursuit of a “sacred” site’s slow transformation in an extended period of time. From the discovery of an 18th century pillar, historians presume that a pagan temple, dedicated to Jupiter, was erected on the cathedral’s actual location. These paleo Christian temples were sometimes built regarding a geographical particularity, or a remarkable landscape element such as a tree with a strange and meaningful shape. These transitions – from an animist then polytheist culture, to a single religion – are what Bianca Bondi is interested in, indeed she has wanted this metaphoric piece to also represent her multicultural upbringing: at once Roman Catholic and African.

In the second room, the artist has chosen to present a new series of three sculptures, the Ectoplasm series, which combine various influences not only cultural but also material. Three mummies, confined inside the window displays, with heads materialized by an object. Their bodies are made of pieces of silk processed in order to make them appear as if made of latex or skin, to which she adds different ingredients such as Ceiba seeds(3). They are shriveled and give off the impression of having been slowly emptied of their substance, as in the images of the deceased and of mediums, popular during the Victorian era. These Ectoplasm seem to have captured the energies of two plates and an amphora which are the symbolic spirits and faces of a mother, a son and a Holy spirit, should one refer to each piece’s subtitle. This work is again an opportunity for the artist to superimpose animist and Christian beliefs, of which she seems to want to conciliate a multitude of symbols inside these figures which become confined capsules, leaving space for magical and spiritual interpretations.

Among these sculptures, the artist presents her “paintings”, the Overlay series which are the result of various alchemical experiences conducted upon a large drawing of nearly nine meters long. She first covers this vast band of black paper with multiple drawings she reproduces as an exercise similar to meditation. Most of the time, they are astronomical schematics, magical talismans or even mathematical figures traced in chalk. She then goes over these sketches with different materials, salt, latex or golden pigments, applying them layer by layer so that these surfaces begin altering the figures which become more and more difficult to decipher, until they combine into a sole pictural landscape, as time passes chemical transformations operate between the different materials. At the end of this long process, the paper’s surface resembles the cartography of an unknown territory. She then cuts out this new “skin” in different pieces which she stretches onto frames, creating a complete series of canvases which continue to slowly evolve through time as the initial drawings rise again to the surface as strange figures.

Thus, Bianca Bondi’s works never appear as complete or final: it’s as if they continue to live from the inside, as expressions, condensations of the artist’s psychic life, and her studio.
– Gaël Charbau

Bianca Bondi was born in 1986 in Johannesburg (South Africa). She currently lives and works in Paris (France).

1. In 2017 in the Amazon rainforest, scientists have observed the moth “Gorgone macarea” settle on a bird’s head while he slept in order to swallow his tears using a proboscis (a sort of trump).
2. The work’s full title is Have you accepted Christ as you personal savior? I considered telling her we hung our gods from trees but thought better of it.
3. The Indians of the Caribbean thought that the mythical creatures called the “Soukougnans” removed their human envelope at night in order to hang them on the branches of the Ceiba tree.