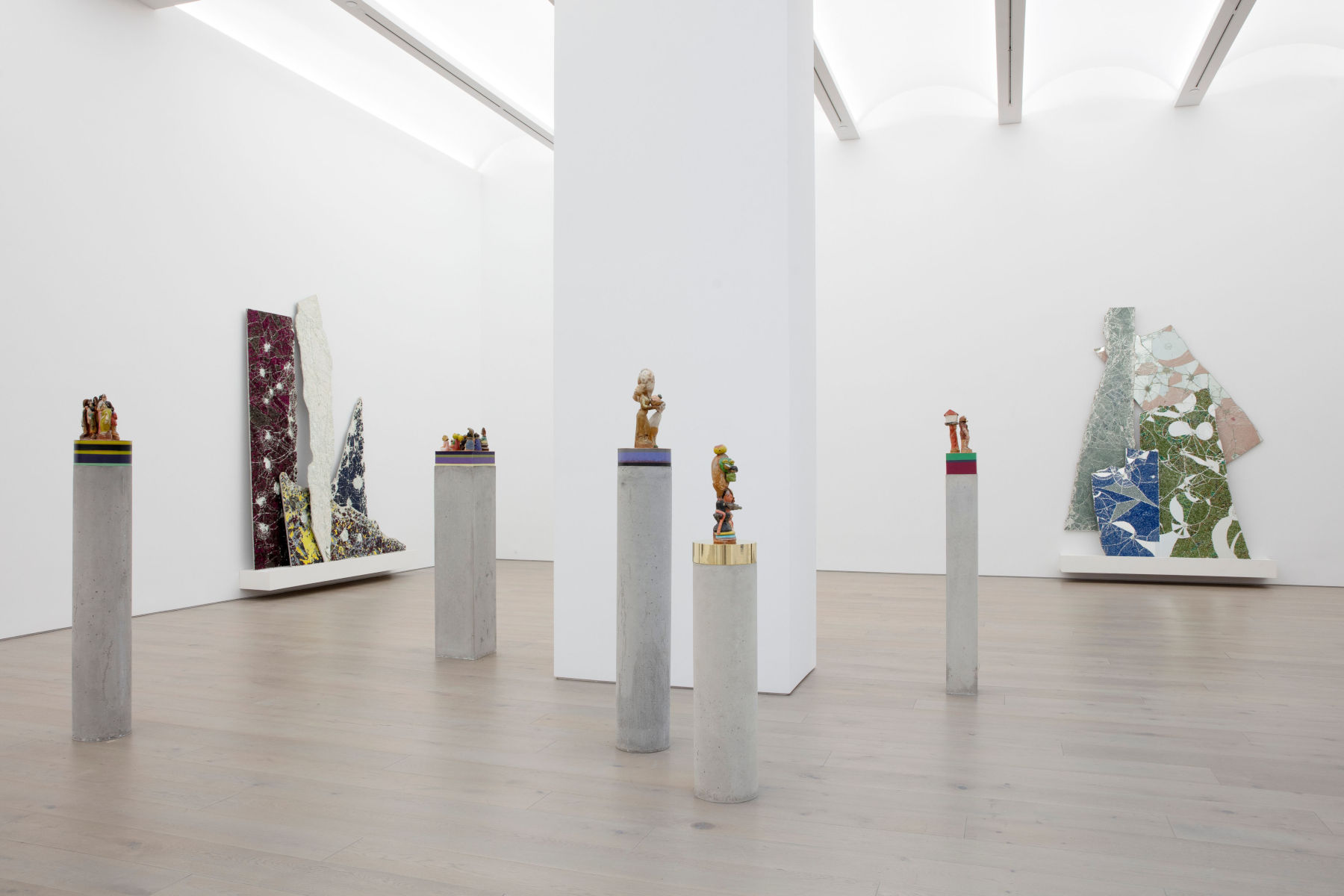 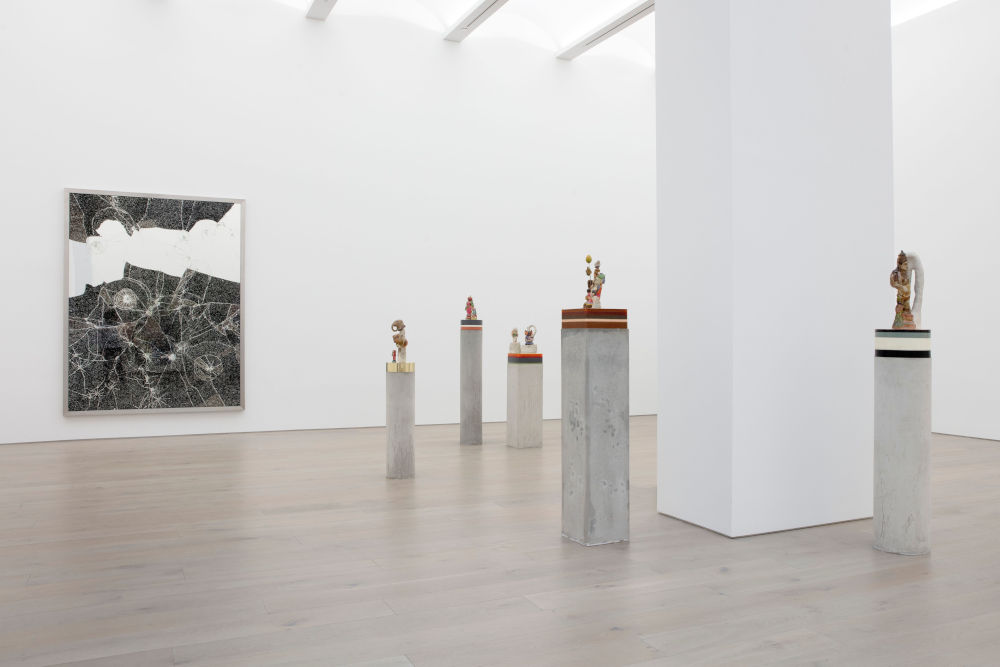 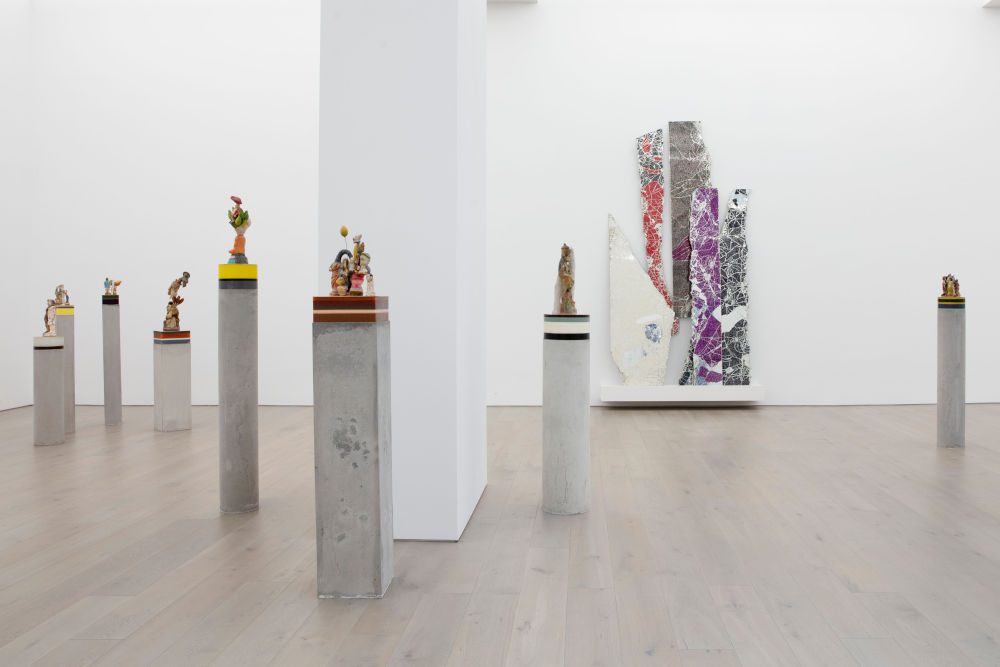 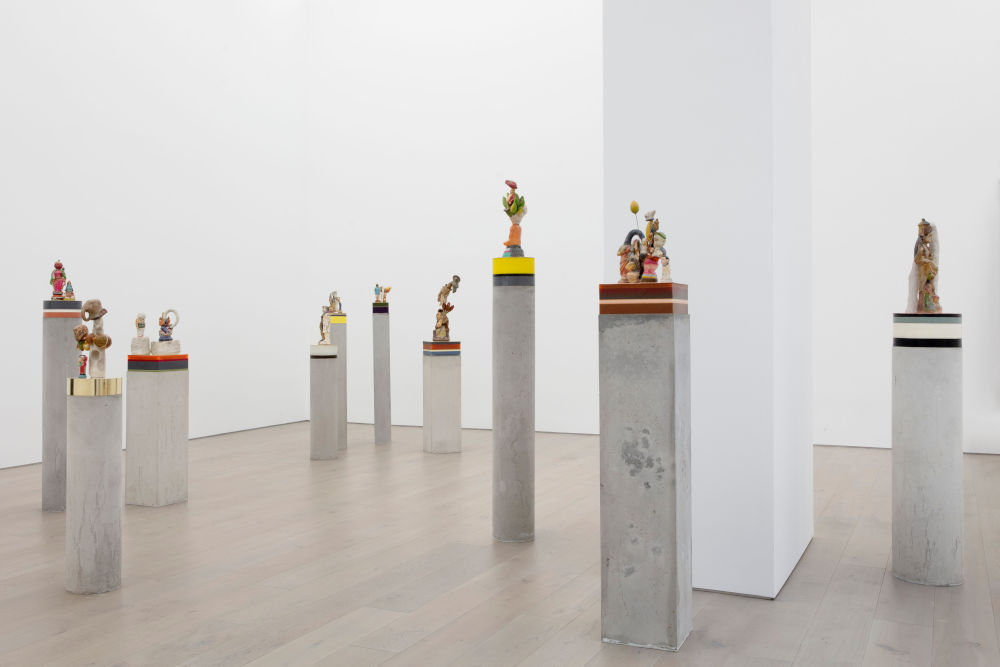 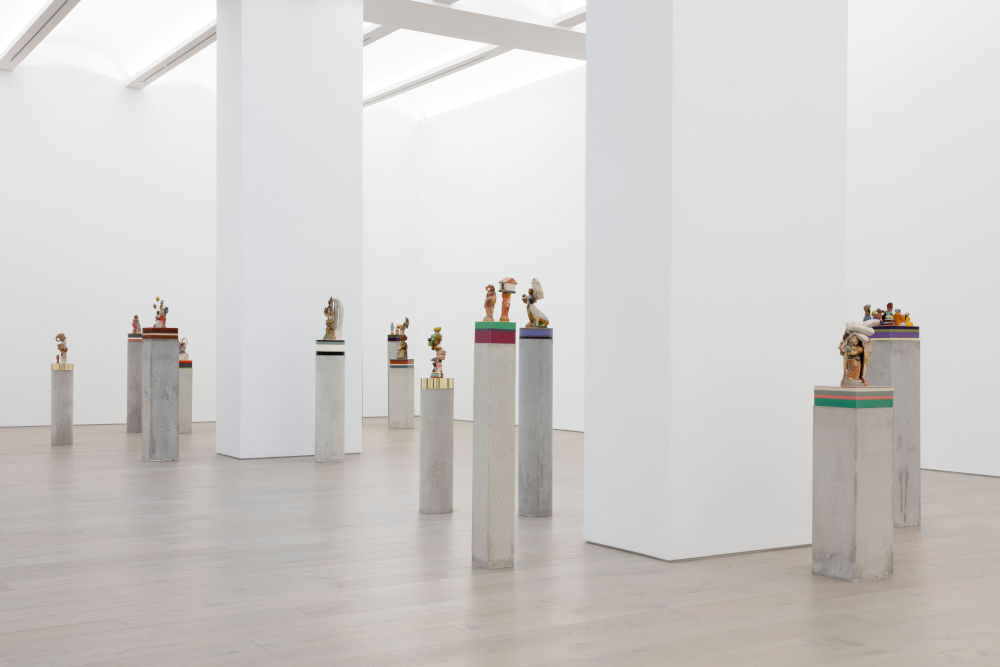 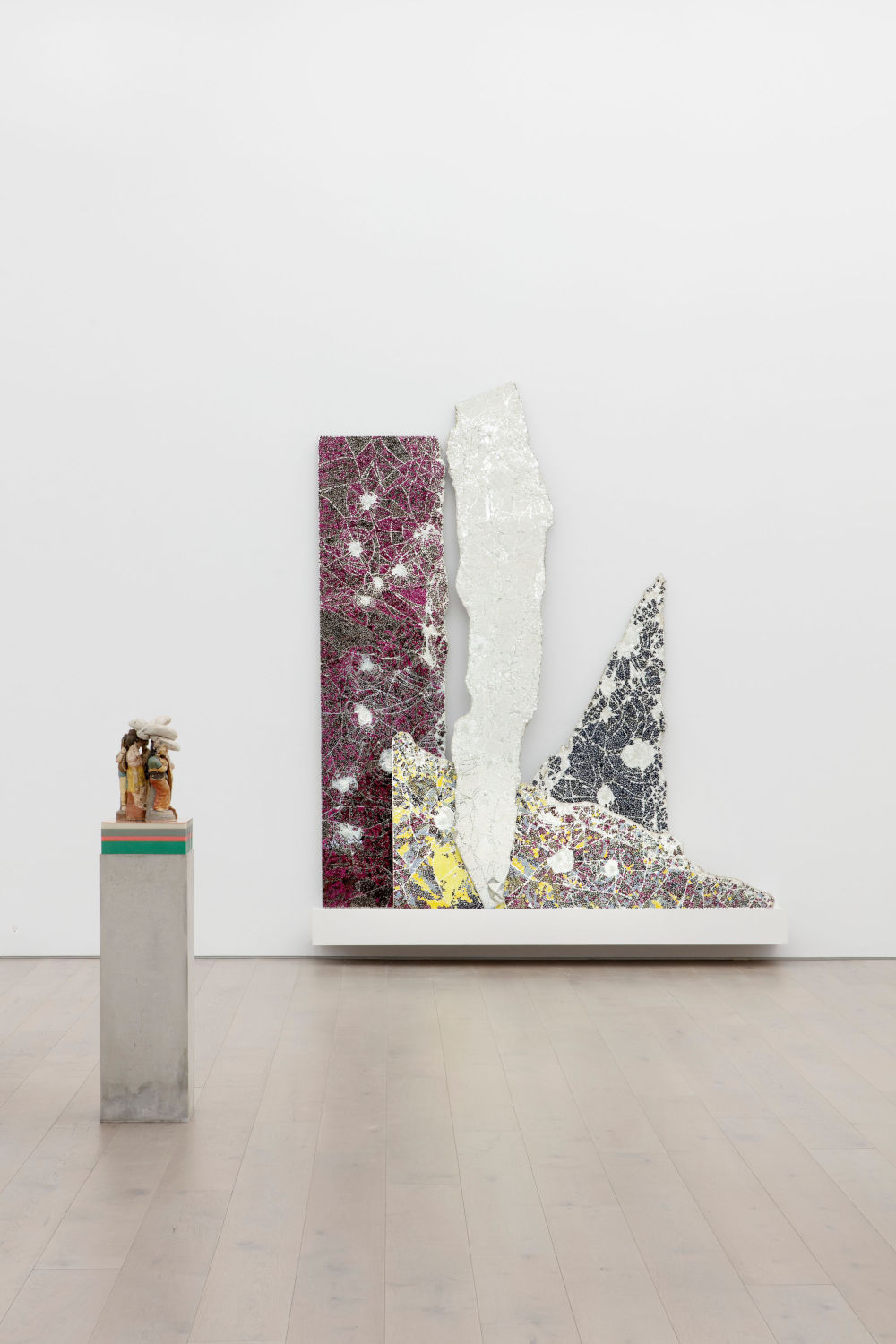 Kher brings a fresh display of a widely heterogenous practice to New York after a gap of 8 years. New York is no longer the same city when Bharti Kher showed here last. But as someone who believes that “change is the very nature of our bodies,” Kher is here to remind us that she is not the same artist either. In this latest encounter between artist and the city, the animal is still displaced but now morphed into an intentional absurdity. The bindi remains, in its rigorous ubiquity, but its surface no longer ensconced, comes to us instead as something broken, and fittingly then, as viewers will see in fluxes of time such as these – as something powerful. It comes as an unexpected freedom of chaos.

Marking this return, is Kher’s Virus, the very first one she made in an ongoing and politically pulsating series spanning 30 years (2010 – 2039). Placed aptly at the entrance of the gallery corridor, her elegant white spiral – now exactly a decade old – ushers viewers in, so quietly, that one could miss it despite its 3-metre radius. But for Kher, whose practice is invested in charting a meta arc with works that are individually whole and yet in ongoing communication with each other across the axes of time and space, the Virus is a “time-tunnel you can climb into, a vortex, a safe hole”. The near unnoticeable quality of its transformation is thus, a deliberate choice on the part of the artist who makes one such work every year accompanied by an evolving text that is part truth and part fiction. This serves both as record and rumination of our place in increasingly post truth world.

Signposting this sobriety, also at the very note that they will exit, viewers will find a riot of colour awaiting them in the main room. On the central walls of the gallery, Kher introduces a suite of five new works marking yet another significant fork in the long road of her bindi based practice. The ritualistic application of bindis – functioning both as membrane and material, as skin and surface, as leitmotif and language – on mirrors has been a growing trend in Kher’s work. And so has been the shattering of them. But in this exhibition, unframed and unfettered, the cracks are laid bare in a nakedness that is vulnerable but also resolutely suggestive of the fault lines and fissures of the many worlds they may find themselves in. Extending like riffs to the edges, these cracks are then sheathed, or one may even say healed, by the artist in a layer of bindis – the proverbial third eye – thus expounding the notion of reflection inherent in her of choice of viewing devices as a surface. In Kher, there is an acknowledgement that the “who are we” question, has been probed ever since Narcissus gazed into his pool of water mirrors. But her point of departure from the ancient Greeks is the belief that by gazing into this dualist surface one can transform into something else – into another being, another eye, even another work of art.

This almost alchemical suggestion of quiet transformation is then amplified when a score of sculptures from the artist’s Intermediaries series are interspersed playfully throughout the tall gallery chamber. Whether they lie strewn in hundreds across Kher’s studio table in their miniature form or betwixt land and sea at the Thailand Biennale in their towering monumentality, no two Intermediaries are the same. Each of the disparate clay figures that viewers will see on display has been meticulously collected, hollowed, conjoined, and refurbished by the artist to be presented atop their plinths of cement and candy like wax. In doing so, each figure is a world unto itself, creating a unique narrative that consciously conflates and cuts across lines of tradition, religiosity, and gender. Theirs is a world that has been described as “at once comic, freakish, and perhaps even disturbing” but always deliberately inchoate.

Kher’s objets trouvés, now fashioned into hybrid beings, appear to be waiting to share the catacombs of their excavated consciousness. Hers is an art-making that is concerned not only with dredging out the past (mythical as well as her own), literally tearing it out from the hollow core of her clay figurines, but concerned also with actively interfering with the “essence” drawn from that tearing out. In Kher, we find ourselves in a lively discourse of found bodies, myths, and even phantasies – all of which are then tested for their individual truth.

For Kher, whose process of art-making involves “turning things on their heads” in a manner that is not irreverent, but that of a creator of new possibilities, these fired clay dolls become carriers that shape new form. Her sculptures are often the site of a palpable trauma and fated remedy, both witnessed with the heart of a mother goddess. In a nod, to the Harappans (circa 2600 BC) who in their cire perdue technique, believed that it was the breath of the maker which animated a sculpture rendering it the subject of worship, Kher evokes this ritual to create “not gods or demi-gods or the heroes you want, but the vulnerable and the constructed.”

The Intermediaries, together with the mirror pieces, appear then as conduits of healing – a powerful thing when we consider that the sculptures are themselves broken. This makes the exhibition, in turn, function as a form of recuperation, of revealing the self, leading to the question: do we ascribe to it a subversive quality in the merging together of the everyday with the god-like, or does the chaos in it point to the disorder of modern societies? Can we speak of a politics in Kher’s work? Is it even necessary?

For her, there is a conscious eschewal of any absolute answer. These deeply psychological works are manifestations of the multiplicities we all carry, and through this they cross the axes of time and lived histories. Kher is not one to prognosticate for us whether an exhibition where most works begin with the act of a hammer is a sign of the times or not. She is interested instead now in “simply throwing the pieces up and seeing where they fall”, in allowing the disorder of things to align to their destined ritornellos, only to be disturbed and found again. In her own words, the linear trajectory is “only one line running through time and space” and it is in “crisscrossing and scribbling, that we leave the marks of our lives.”

Installation View of Bharti Kher: “The Unexpected Freedom of Chaos” at Perrotin, New York, 2020. Photographer: Guillaume Ziccarelli. © Courtesy of the artist and Perrotin.