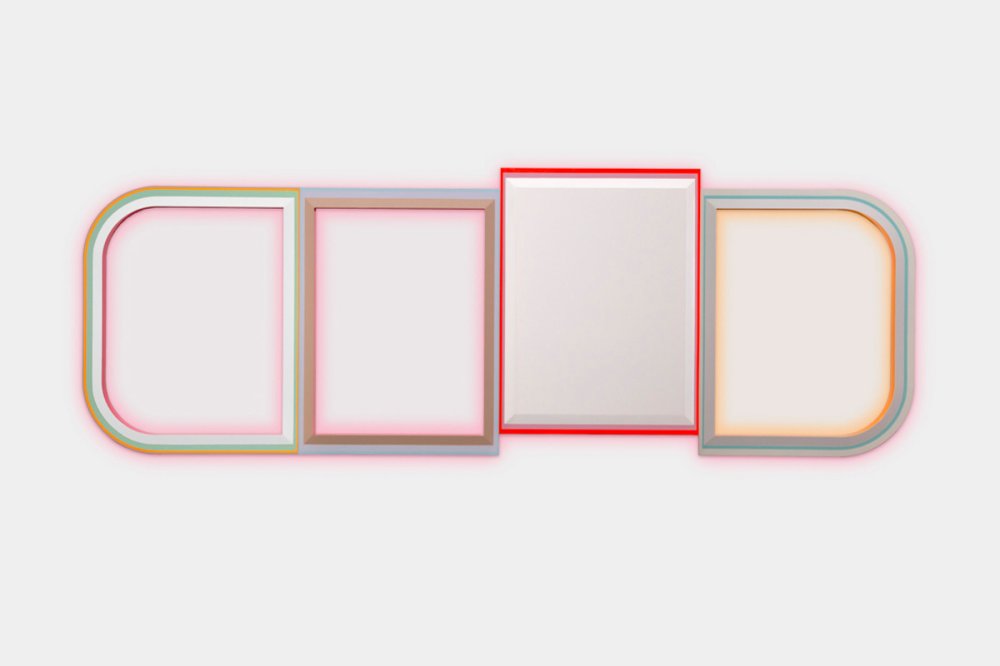 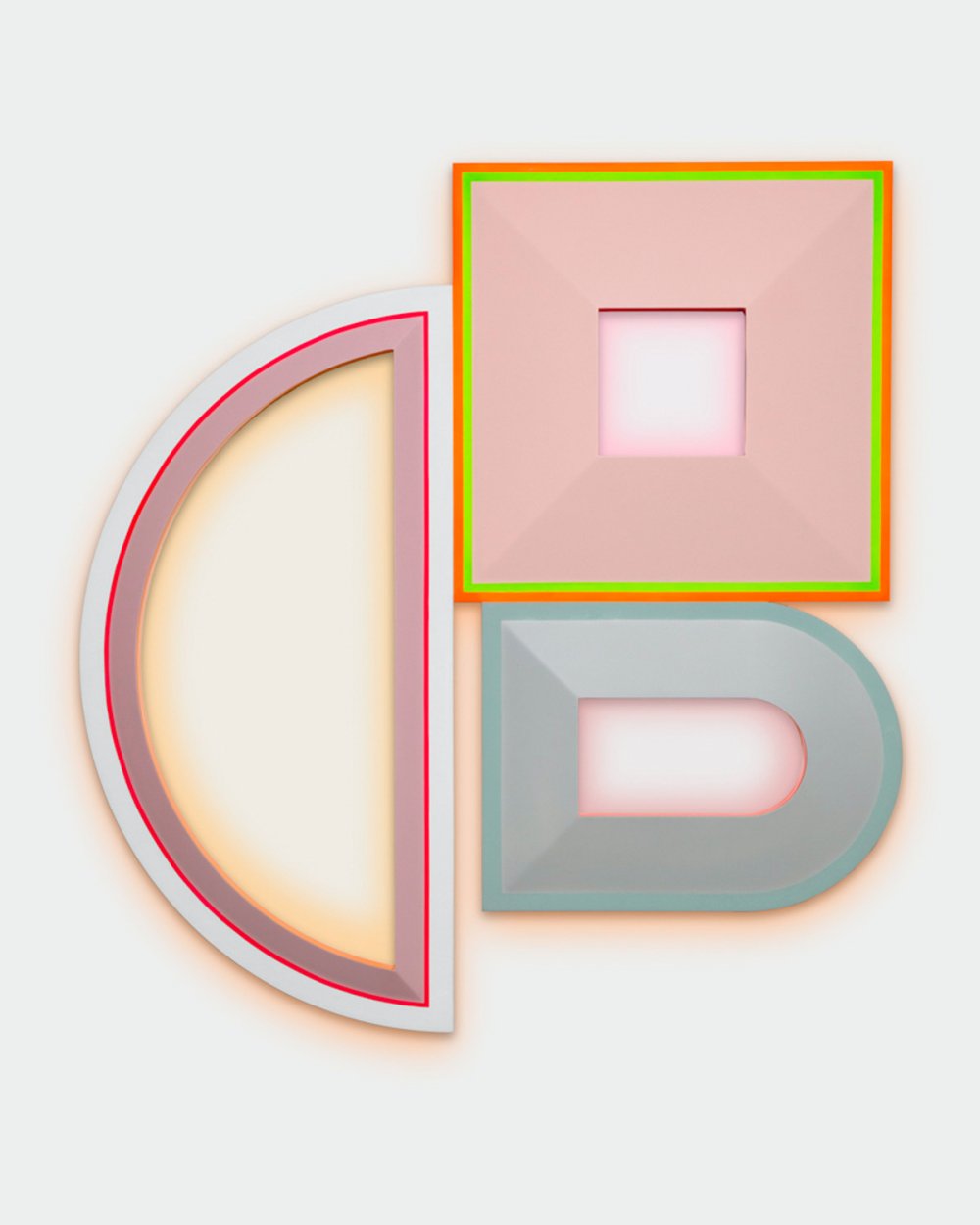 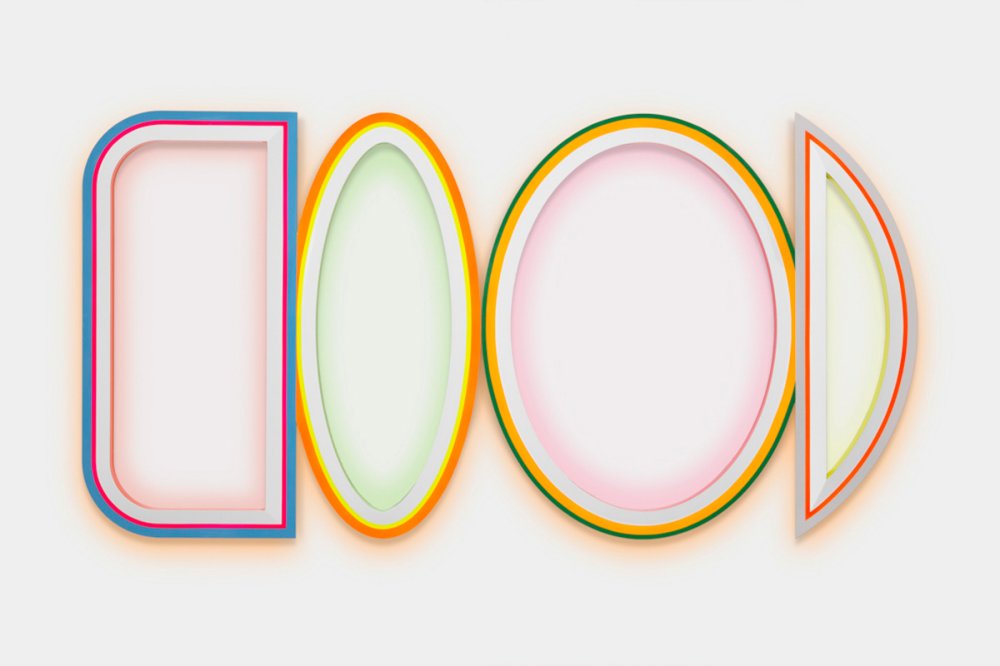 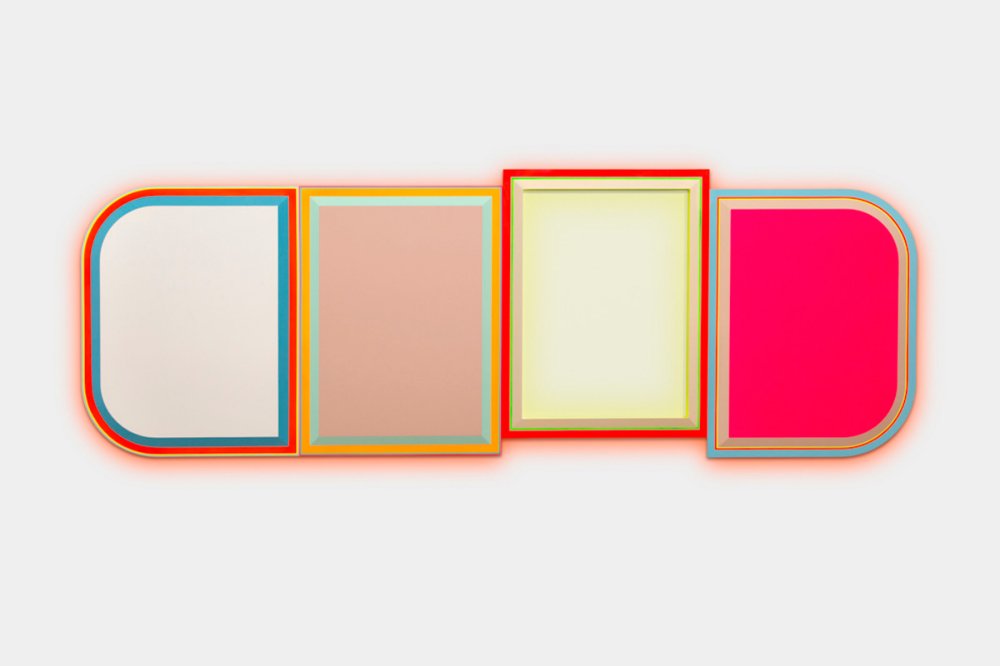 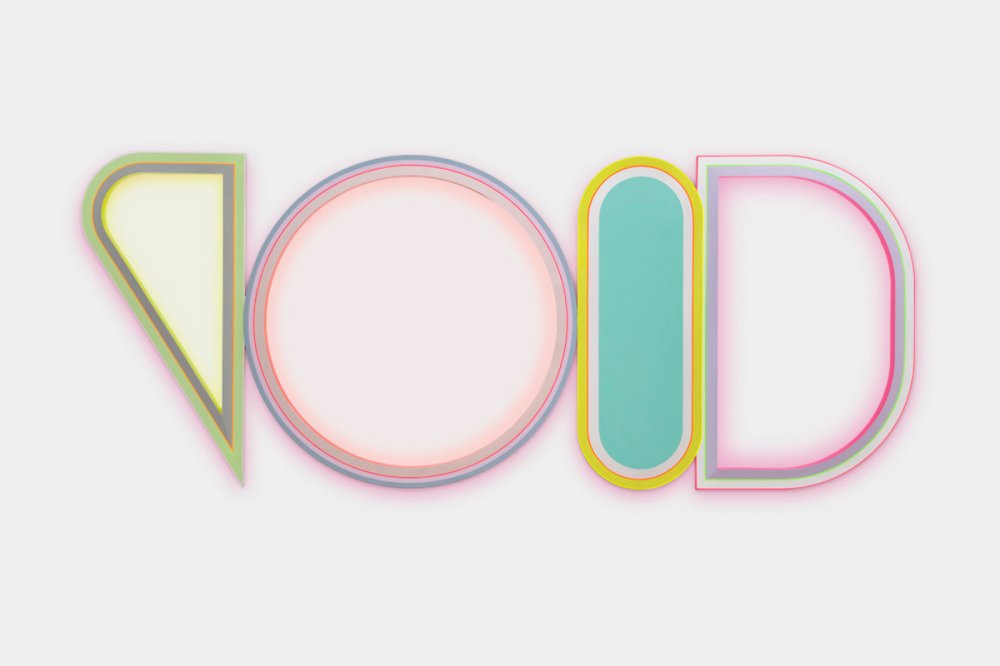 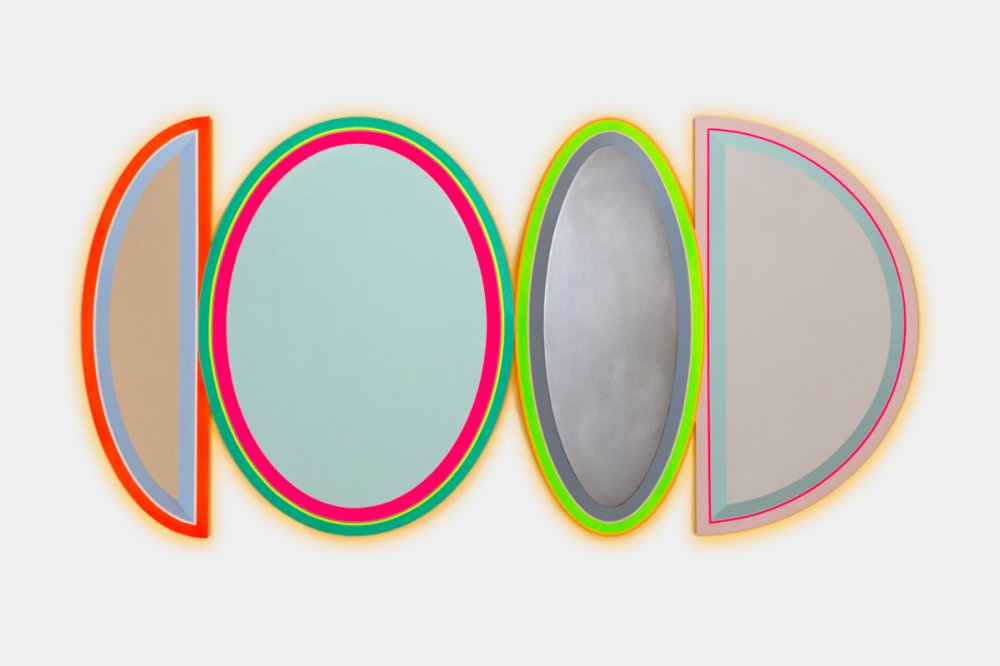 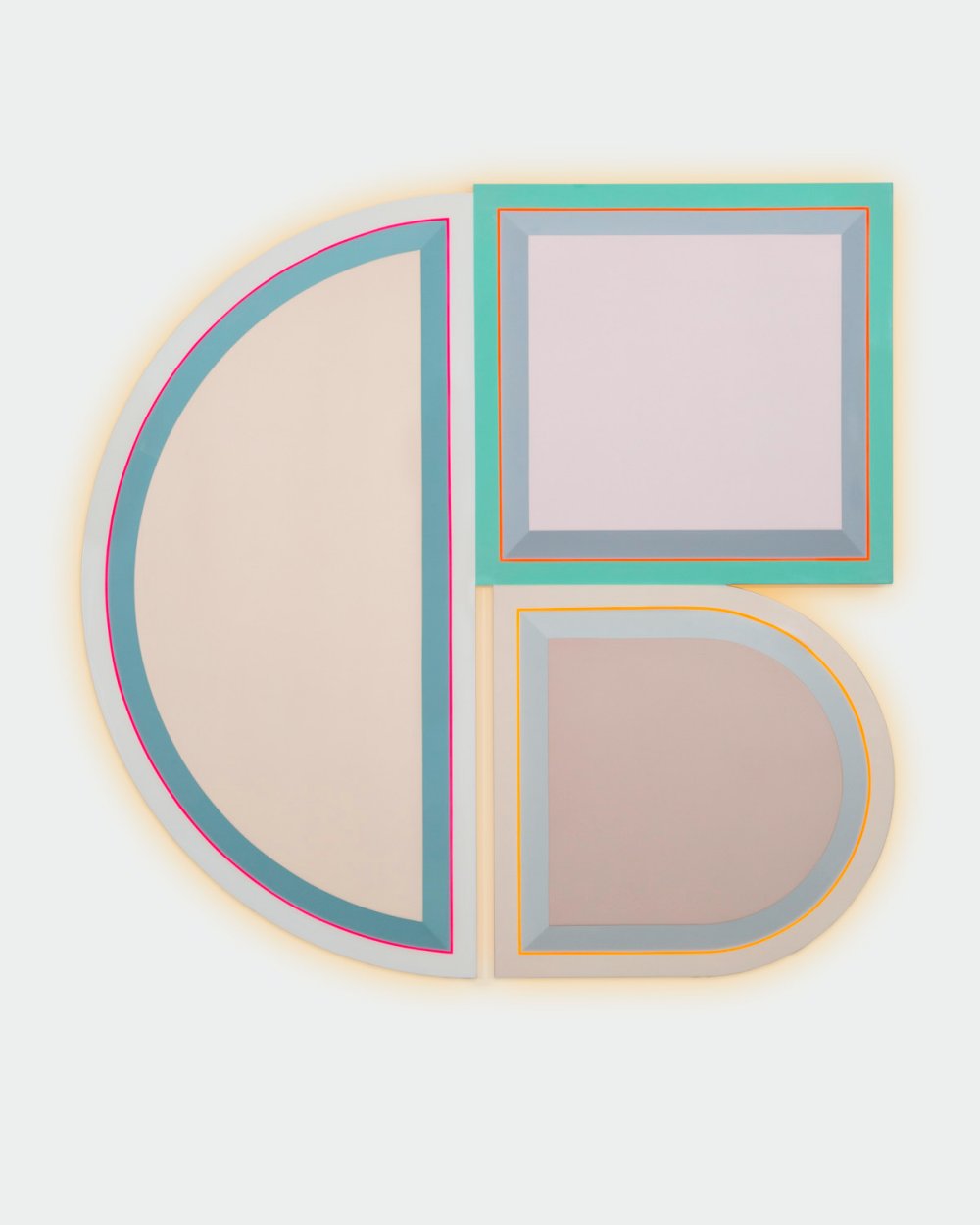 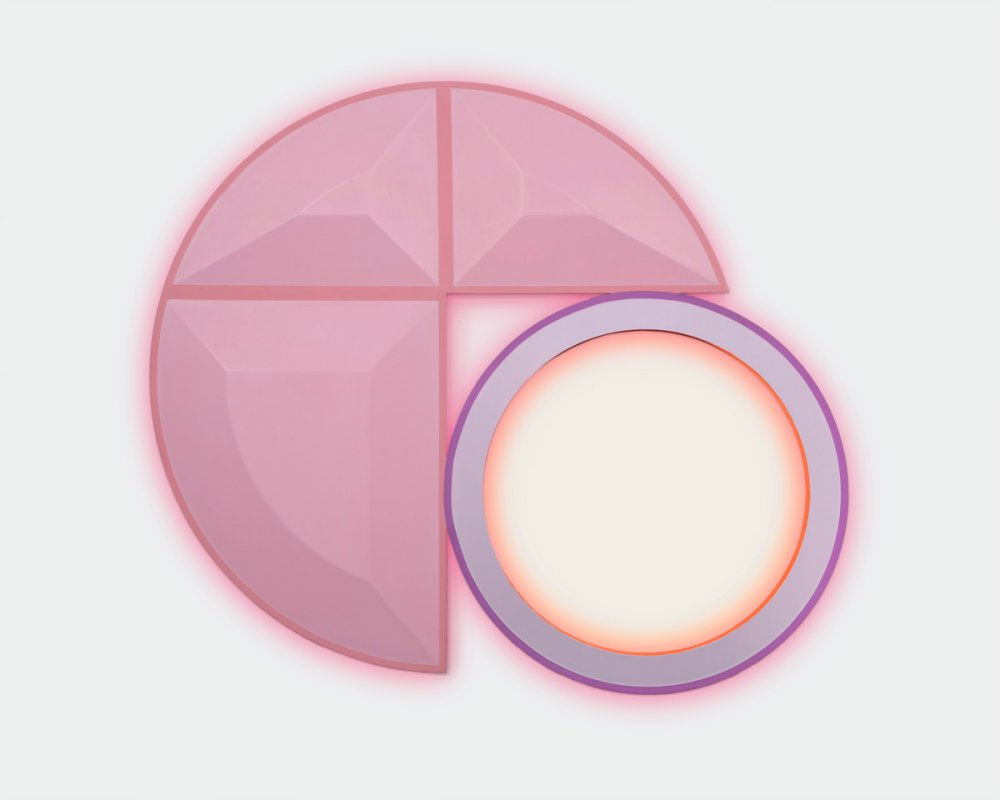 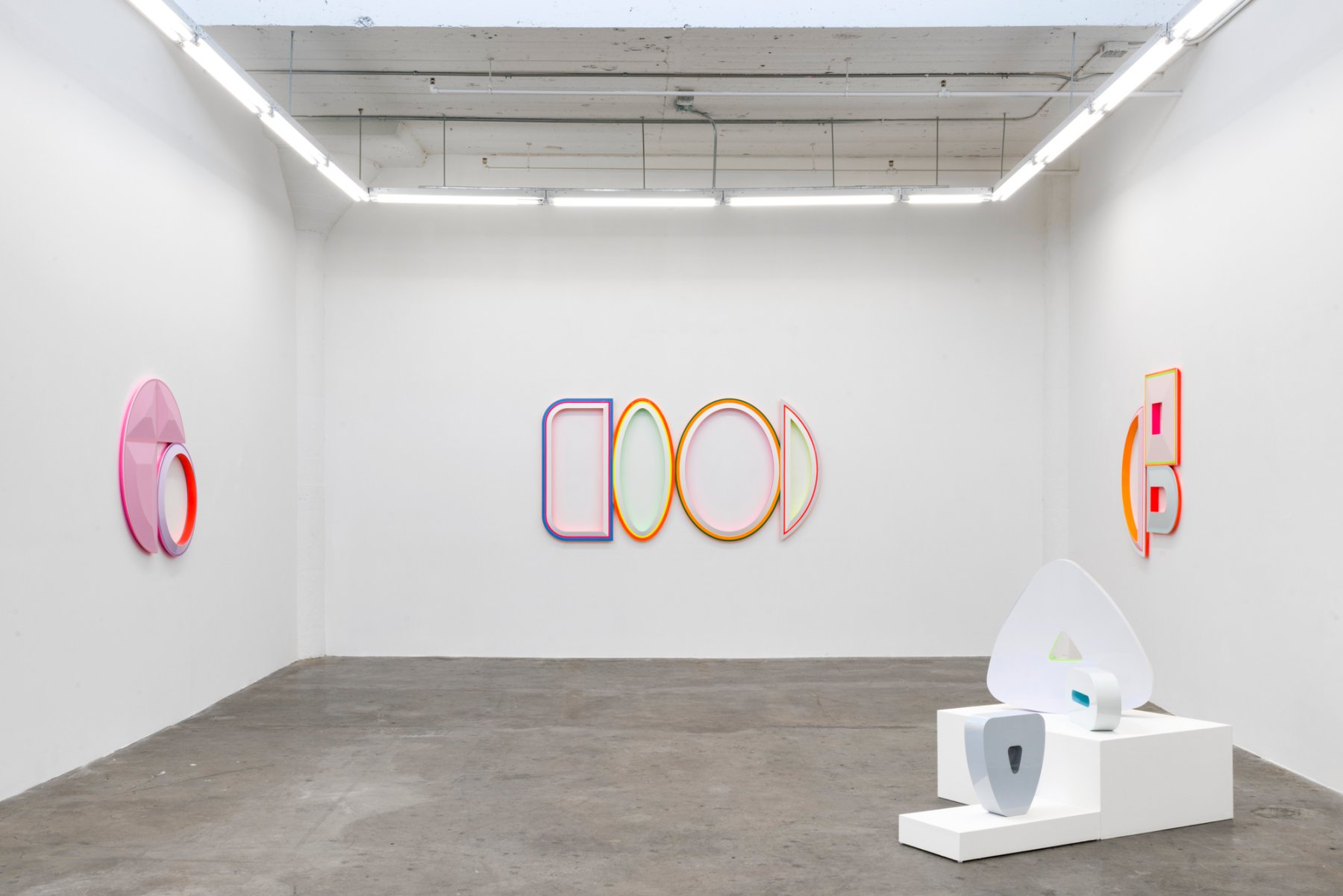 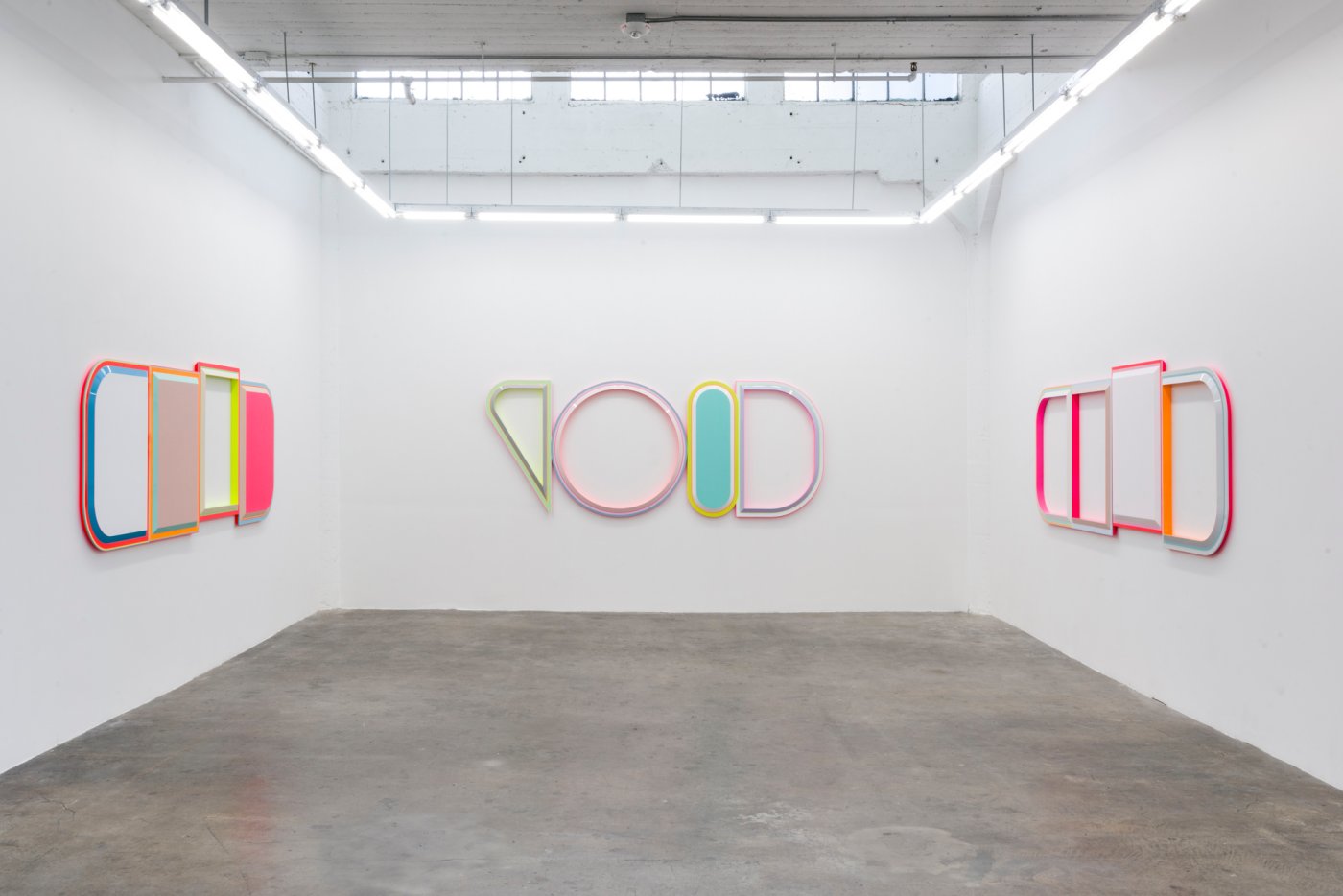 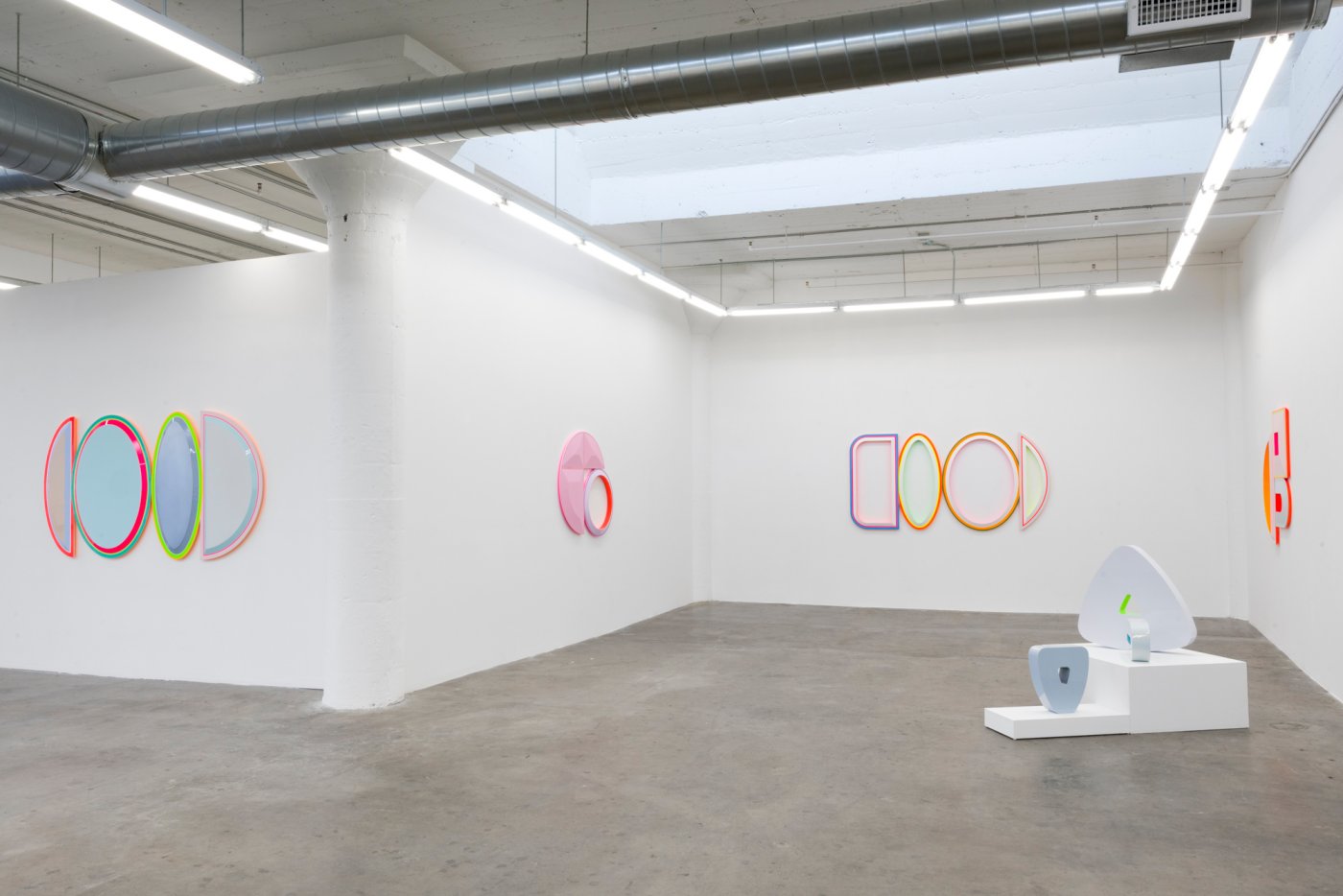 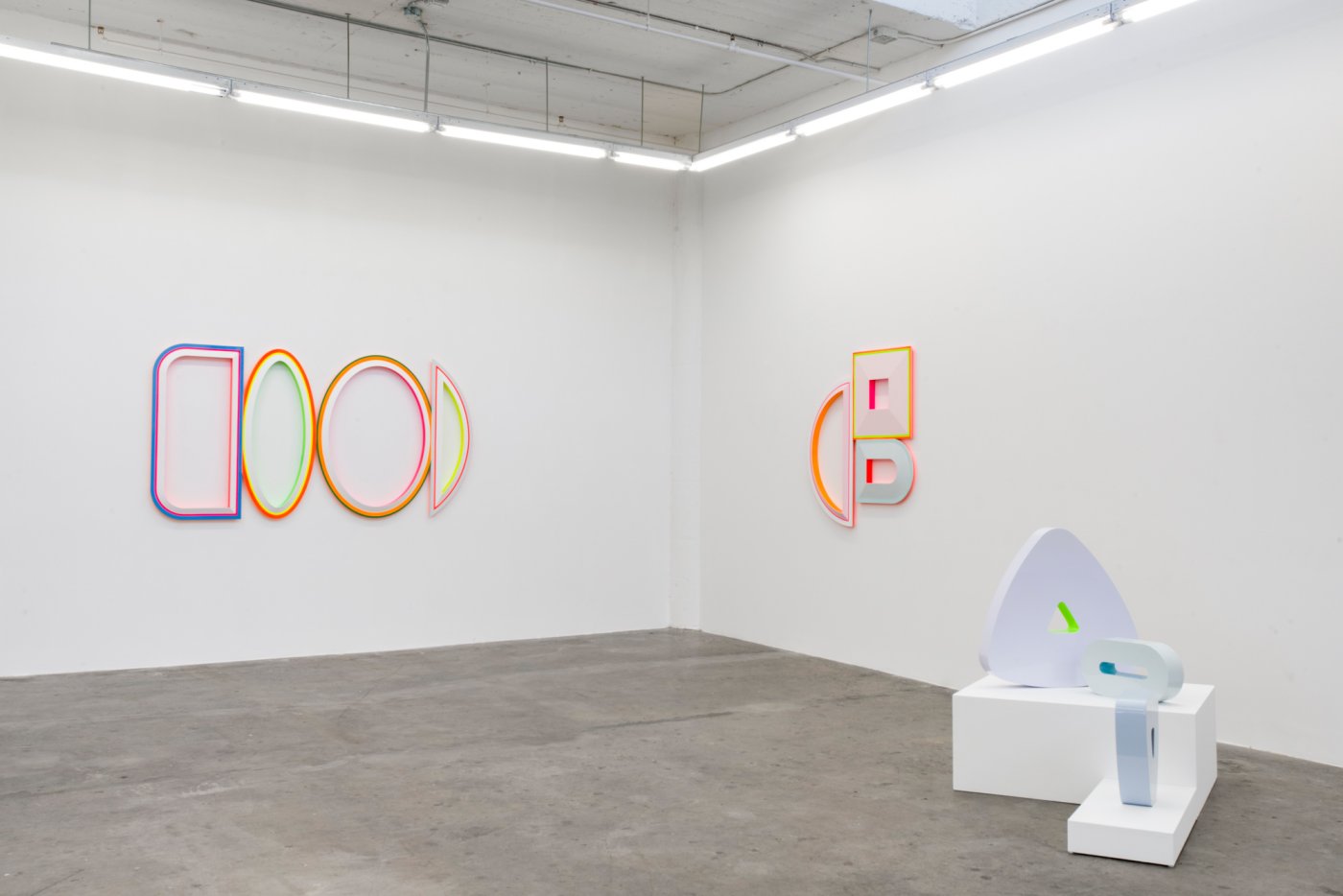 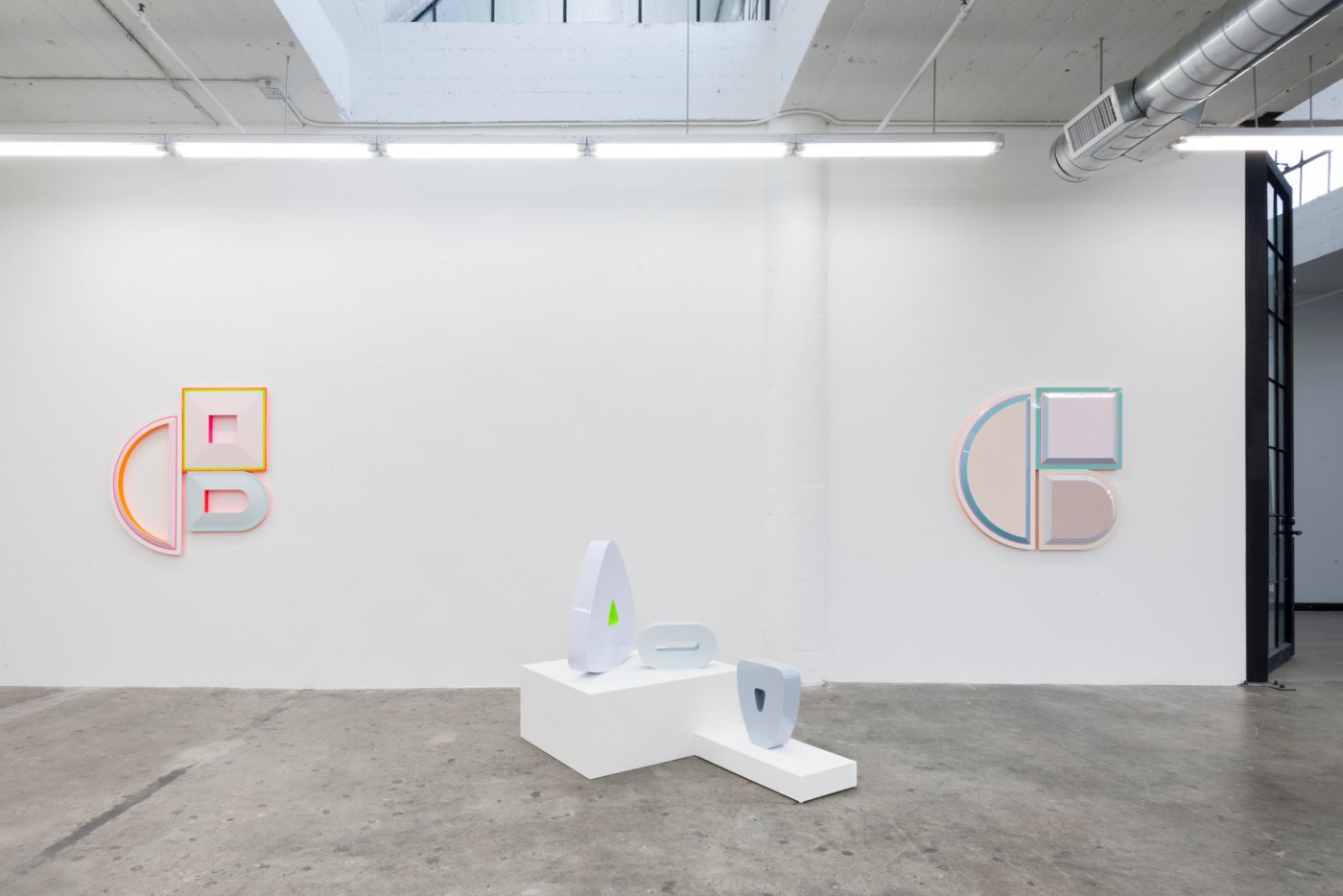 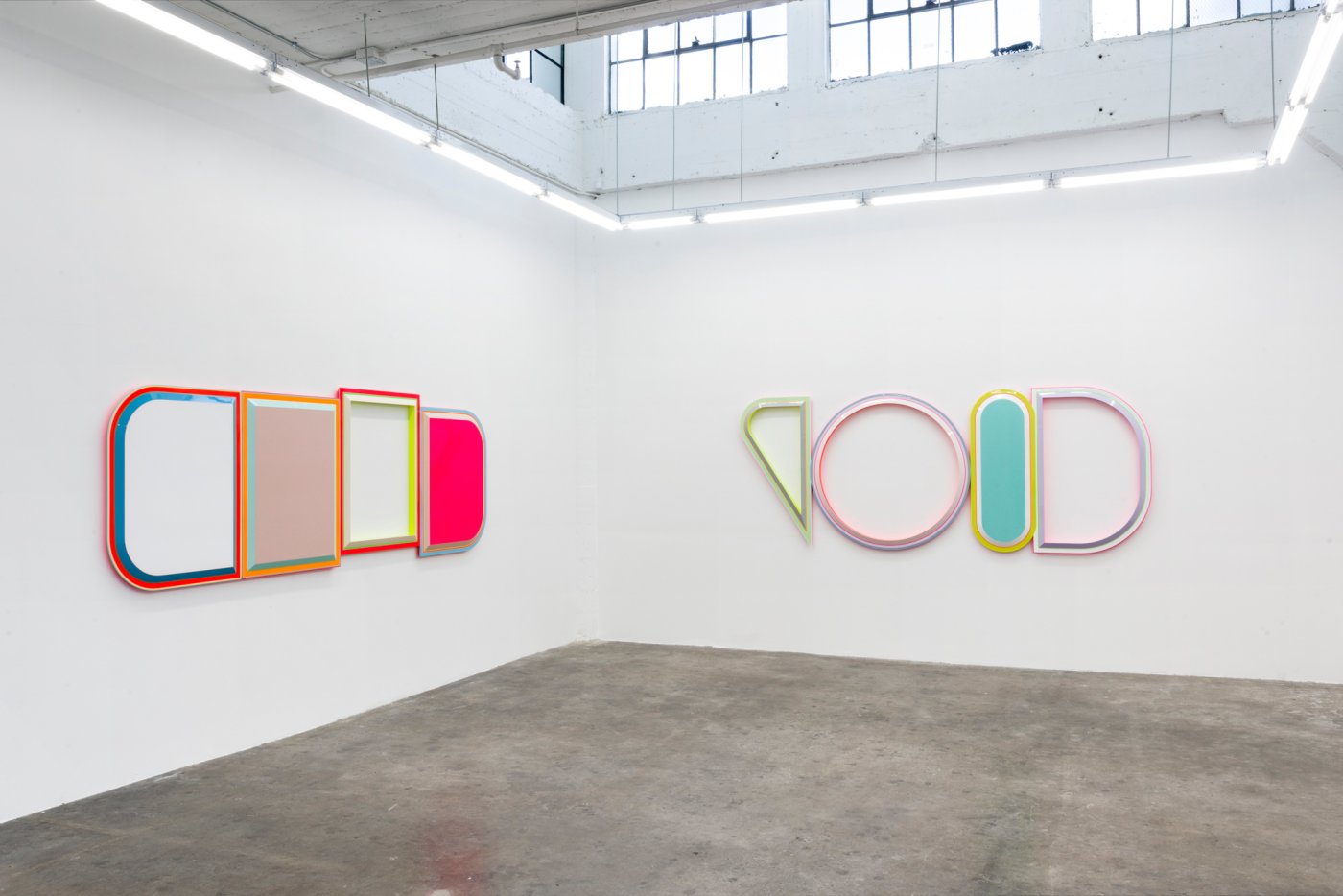 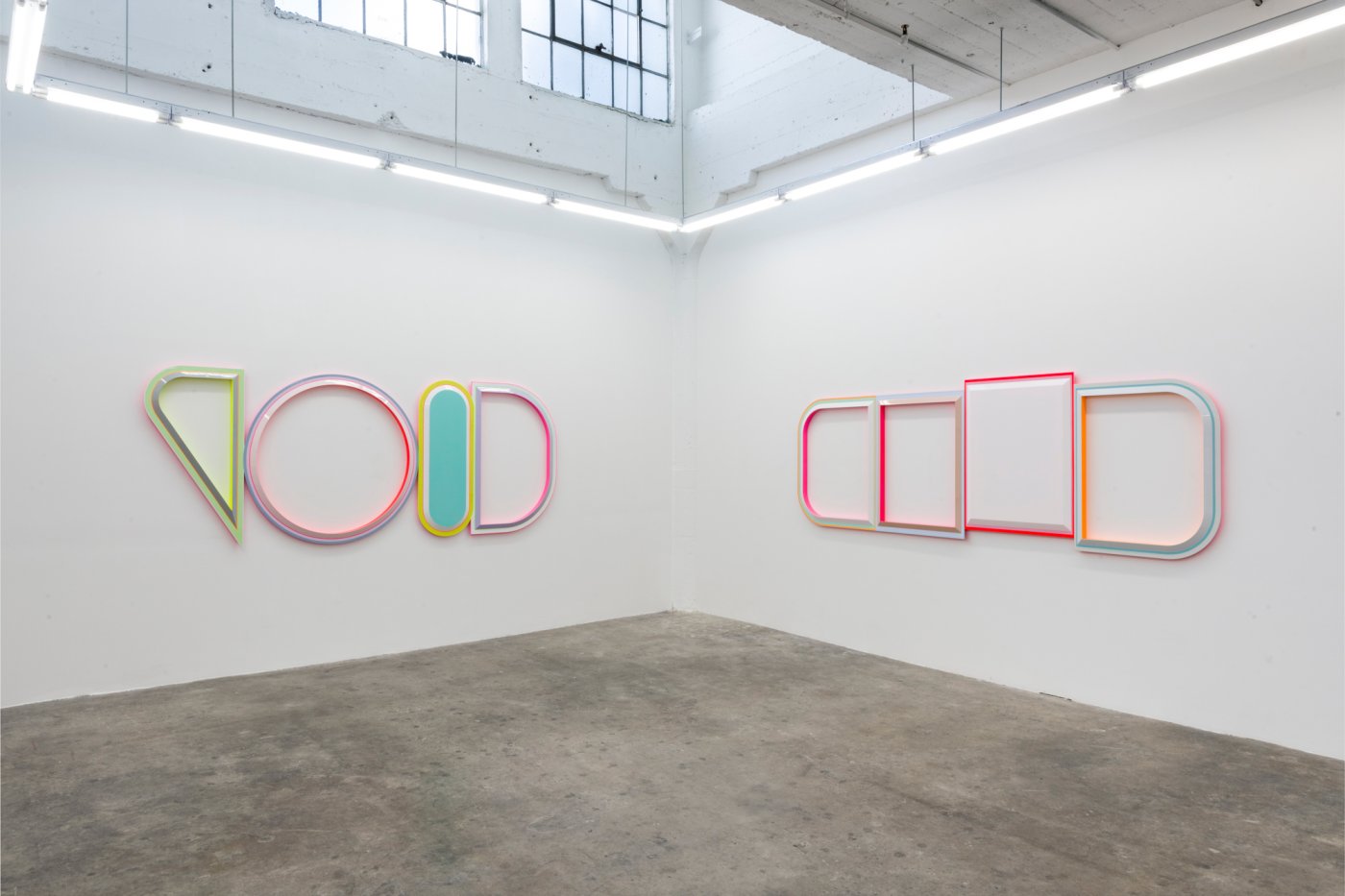 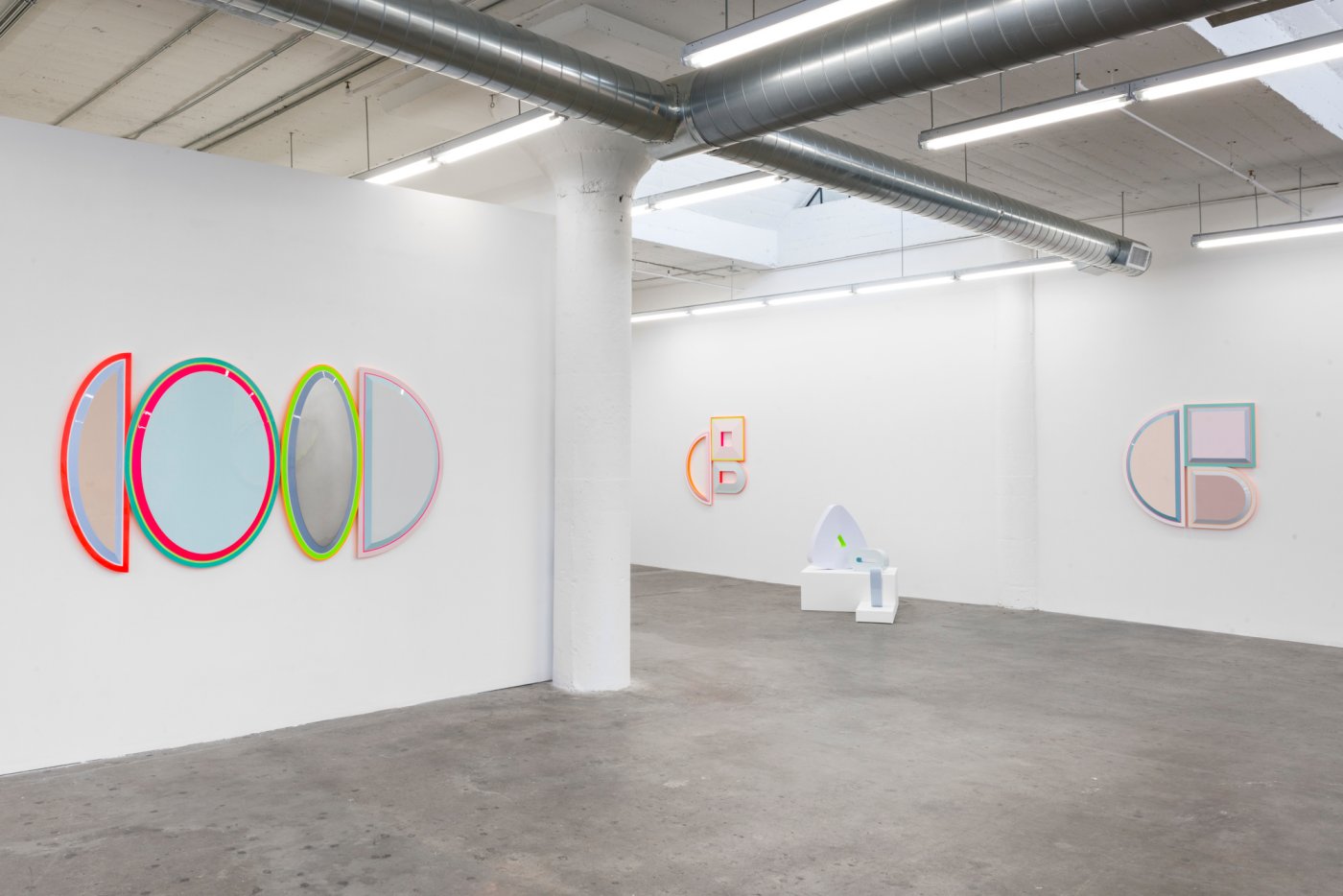 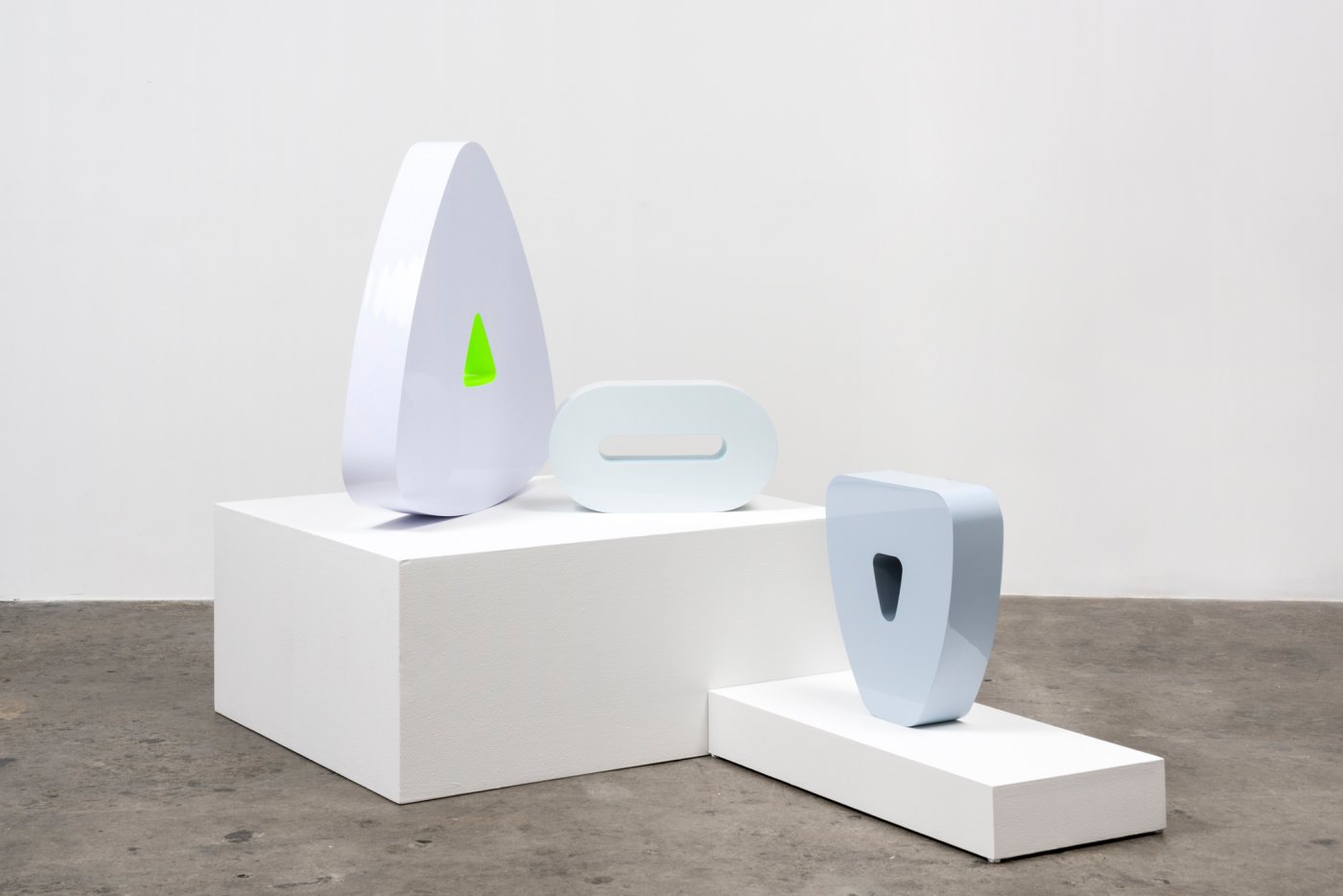 The exhibition’s declaration of affection signals a pivot to the personal in Fishman’s new body of work, for which she has developed a distinctive color palette for objects that occupy a liminal position between two and three dimensions, subtly acknowledging a debt to styles with California roots, including the Light and Space and Finish Fetish movements. The enticing and deceptive optical effects the new works produce also expand upon Fishman’s long-standing investigations of how physical and mental states with no fixed visual forms of their own—namely, pain and wellness—are articulated in the marketing of pharmaceutical conglomerates to an increasingly medicated general public.

Fishman’s compositions evoke alternative histories of Minimalism, beyond the hard-edged austerity that dominated on the East Coast. They conjure to mind the surprisingly bright palette of Eva Hesse’s early work, before she abandoned color entirely, and the vaporous hues of the wall reliefs of Craig Kauffman, who never gave it up. A vital aspect of Fishman’s works is produced not by the raised, sculptural paintings themselves, but by the effects they produce on the white walls around them. The bright hues of urethane paint circumscribing each shape enhaloes them in a soft, pseudo-neon glow, encompassing the space of the gallery within the totality of the work. In the paintings Untitled (Pain, Anxiety, Anxiety) (2020) and Untitled (Pain, Asthma, Anxiety) (2021), Fishman’s deft handling of both matte and satin finishes produces the illusion of three-dimensionality within the compositions as well as confusion over whether the forms are convex or concave. This muddling of positive and negative reflects the increasingly ubiquitous practice of polypharmacy, in which an individual patient is prescribed a regimen of multiple pharmaceuticals with potentially deleterious combined effects.

While the polymer sheen and half-moon and ovoid shapes of certain of Fishman’s paintings may directly evoke tablets and capsules divided and dosed, their beguiling forms more importantly demonstrate how both sickness and health are abstractions marketed through slickly seductive gambits. The rosy hues suffusing the works nod to the ways in which women are particularly vulnerable to pharmaceutical campaigns that gender their targets, even as they dangerously misdiagnose them; for example, the documented phenomenon of women’s heart attacks being misidentified as anxiety. Taking into account the real impact of intent and anticipation on the wellness of individuals in the thrall of the placebo effect, Fishman proposes that the transformative effects of viewing art produce similarly inexplicable shifts in wellbeing.

Courtesy of the artist and GAVLAK Los Angeles | Palm Beach