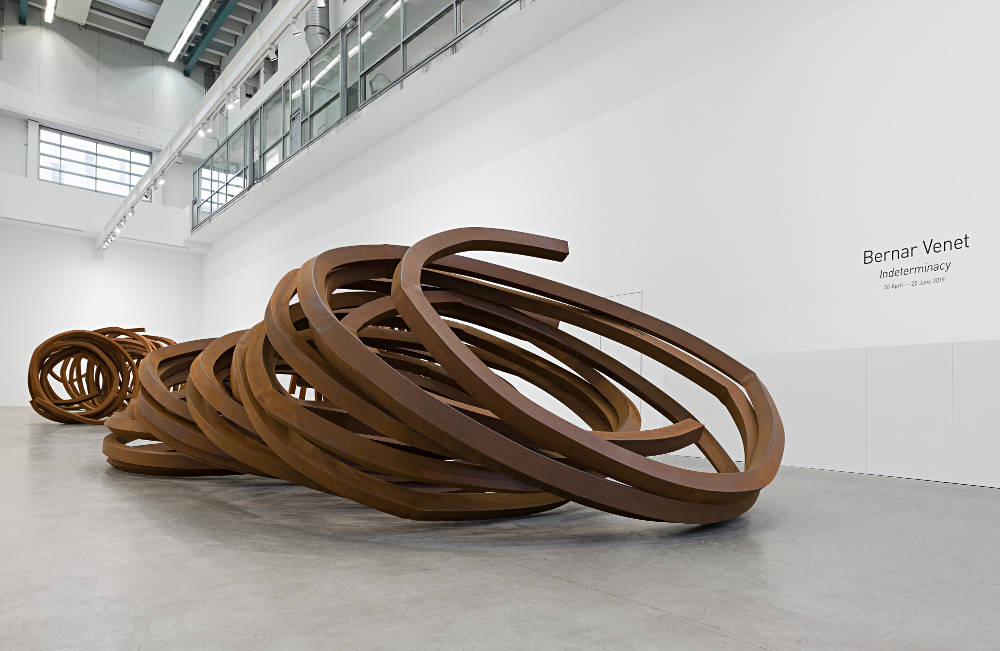 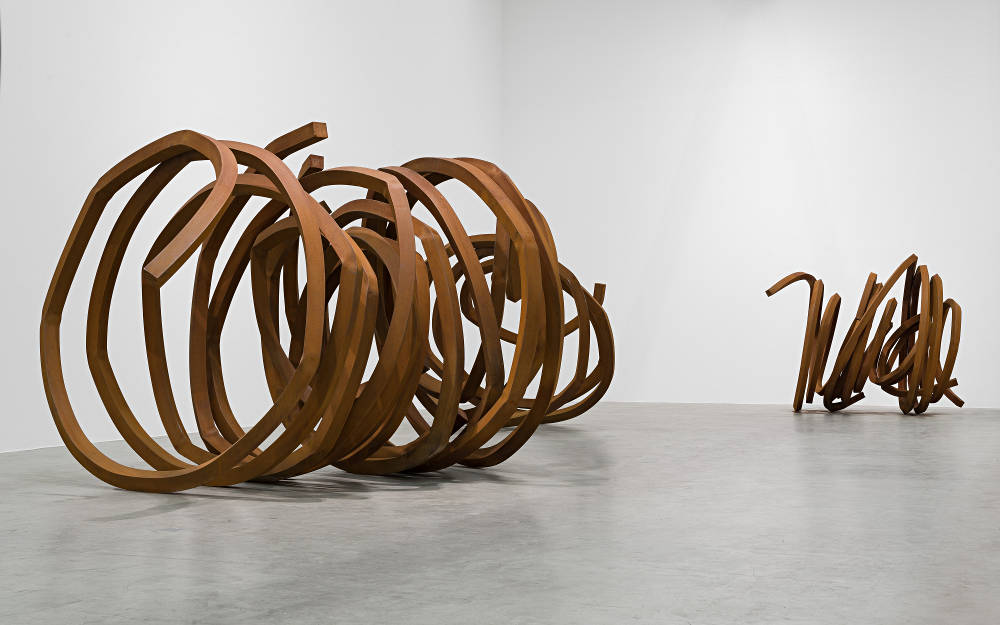 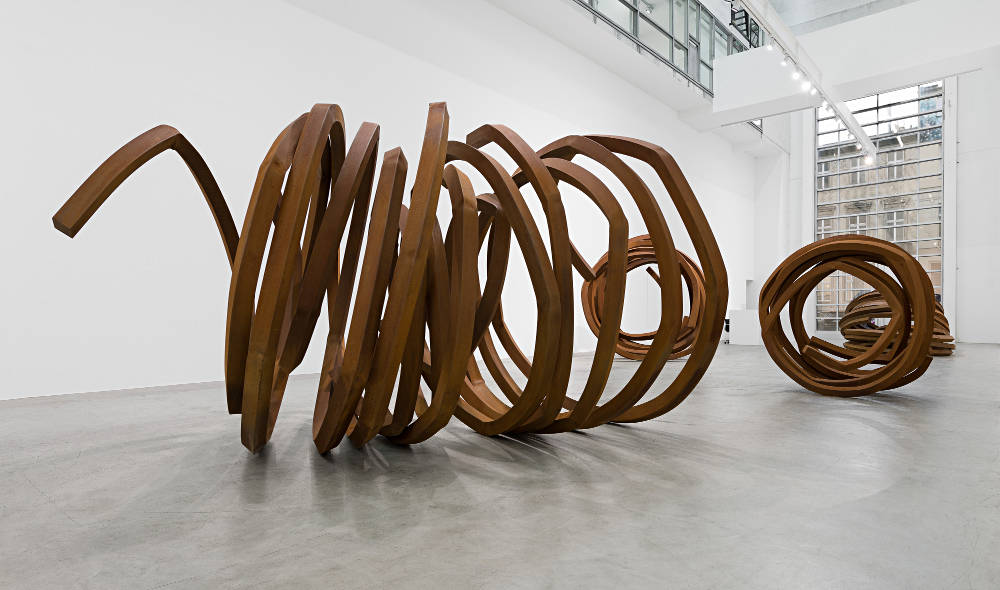 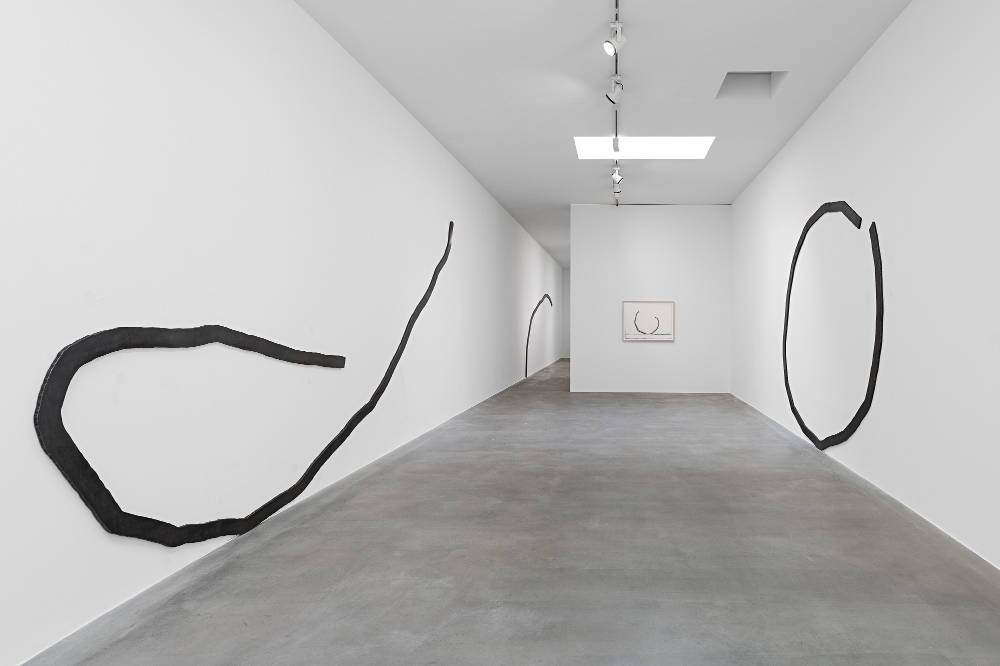 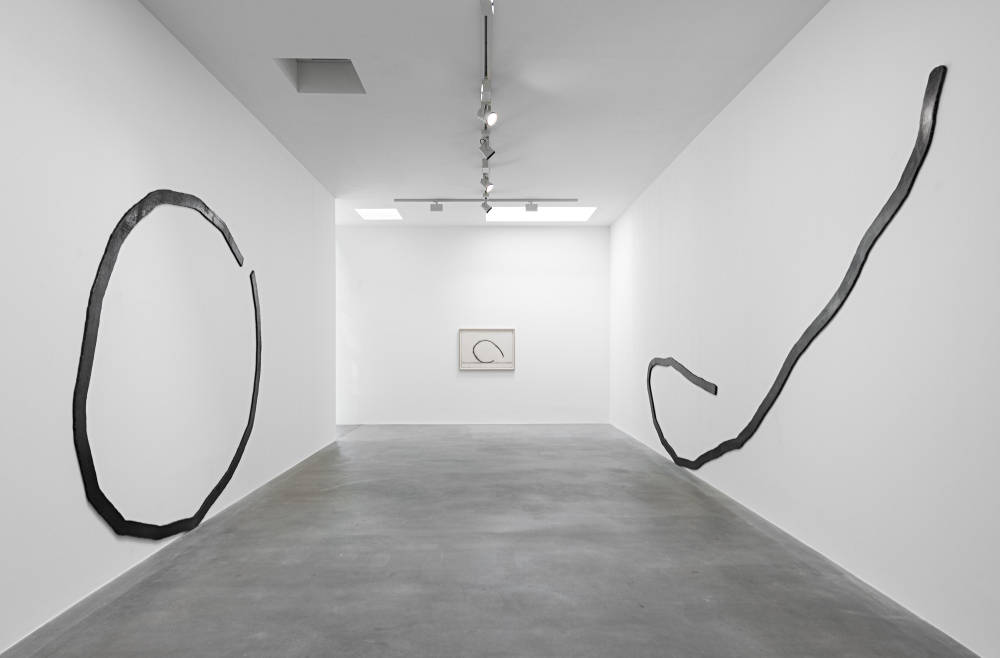 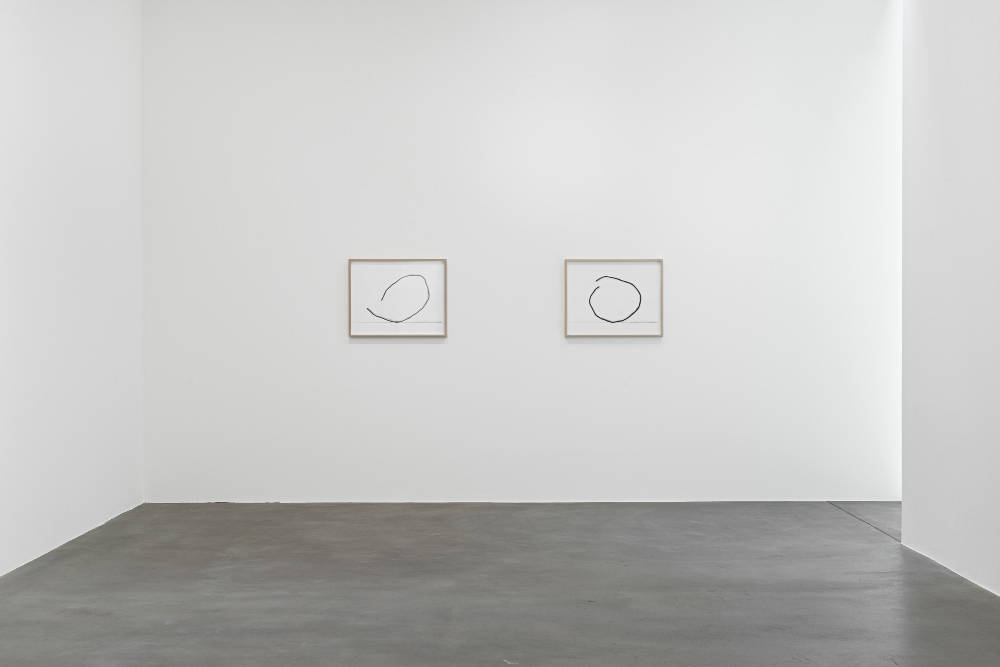 Three large Indeterminate Line sculptures of looping rolled steel stand freely on the ground floor of the gallery. Their order and balance find their counterpoint in what appears to be the same loops, collapsed into a chaotic heap that obstructs the entrance. Venet describes this Effondrement: Five Indeterminate Lines and the accompanying Indeterminate Lines as “the result of improvised, intuitive, and empirical work. These sculptures don’t create themselves. One must witness their production to understand how difficult it is, to cold- twist these full steel bars that measure 4 inches and a half the square section. One then understands the dangers to which I expose myself and the physical efforts that I am subjected to. At each instant it is necessary to find improvised solutions so that I can attain the desired goals”.

The upper gallery is dedicated to Venet’s new series of wall reliefs, titled Continuous Curve. As with other works in the exhibition, these works, torch-cut from large steel plates, are grounded in mathematical practice. With their reduced, yet imposing elementary lines, they are positioned somewhere between the artist’s sculptural works and works on paper, the latter of which relate to Venet’s Continuous Curves and Indeterminate Lines. These graphite drawings and collages of lines drawn in heavy oil stick are generated through an equivalent, though less industrial, process to the making of the artist’s laser-cut reliefs.

Born in 1941 in Château-Arnoux-Saint-Auban, France, Bernar Venet rose to prominence in the late Sixties through the avant-garde art scene in New York. He became instrumental in developing a radical new proposition involving the use of mathematics and scientific language, alongside artists such as On Kawara, Lawrence Weiner and Joseph Kosuth.

By the late Seventies, Venet found that the geometrical definitions that determined an outline allowed him to engage in an aesthetic approach that he had previously eschewed. In 1979, the outline became the work in itself; Venet made Position of an Indeterminate Line and shifted his focus away from pure geometry. Created randomly without the aid of instruments, this graphite-on-wood work was in sharp visual contrast to earlier works. The introduction of chance into his practice, over time, created various opportunities for him to explore new aesthetics in works that remained rooted in mathematics.

Whether geometrically defined or indeterminate, the relief of Venet’s wall-based works moved closer over time towards sculpture, for the first time connecting with both the wall and the ground in Indeterminate Line, 1984. His works are in collections of major museums, including Centre Pompidou, Paris; Guggenheim, New York and MoMA, New York. Venet’s works have been exhibited widely around the globe, including at The Palace of Versailles and a recent retrospective at MAC Lyon. An exhibition of his sculptures has been touring various cities around the world since 1994.