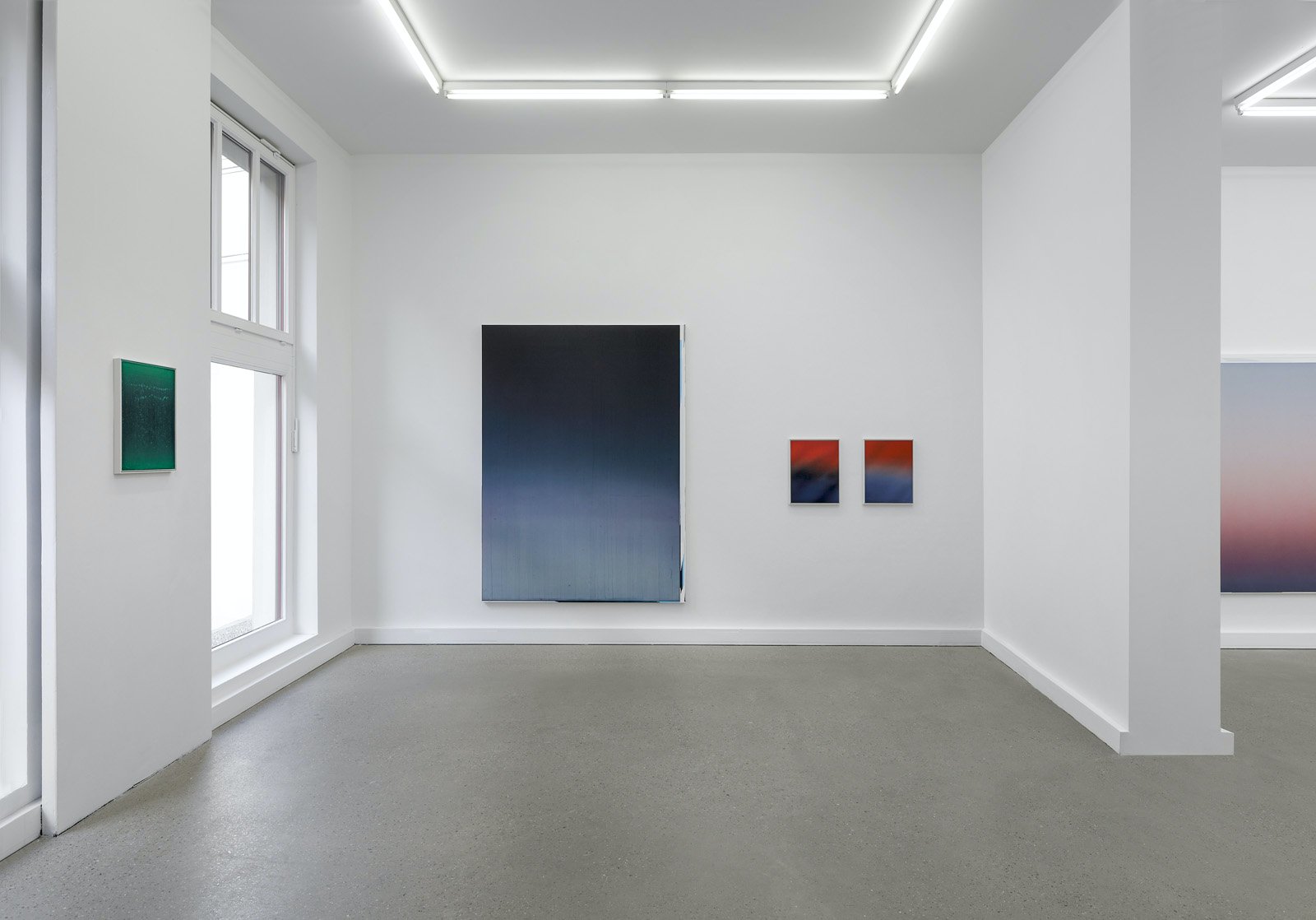 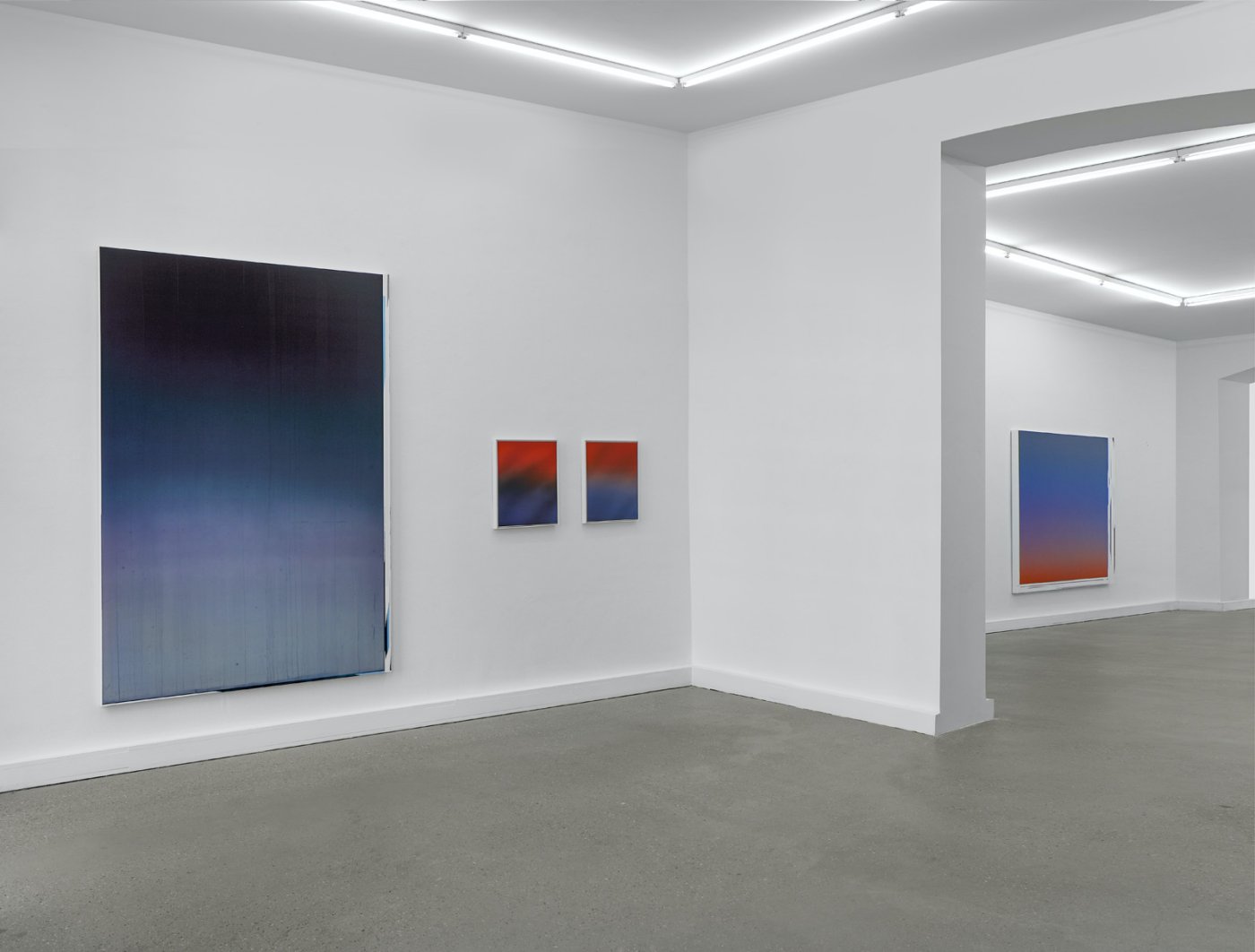 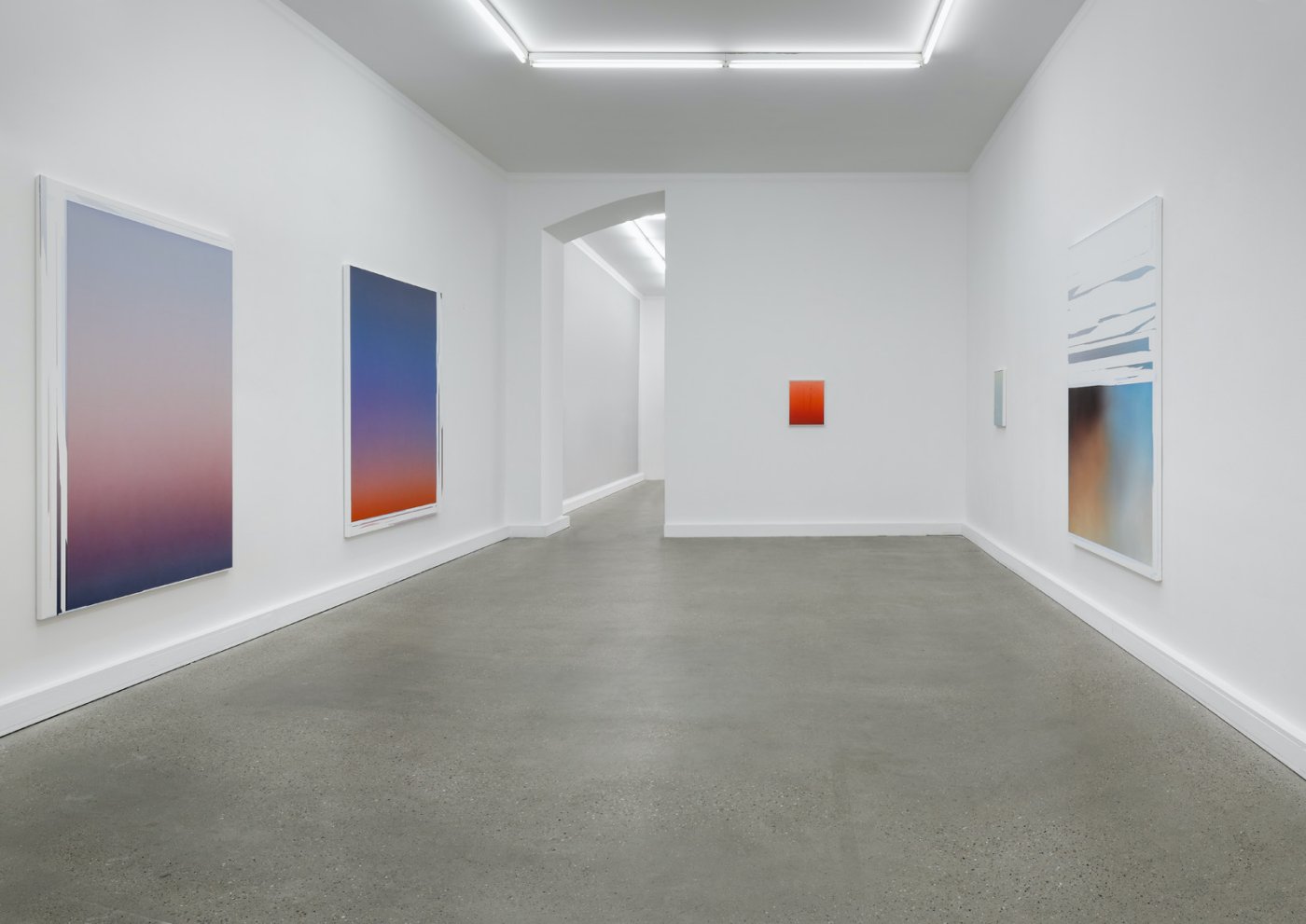 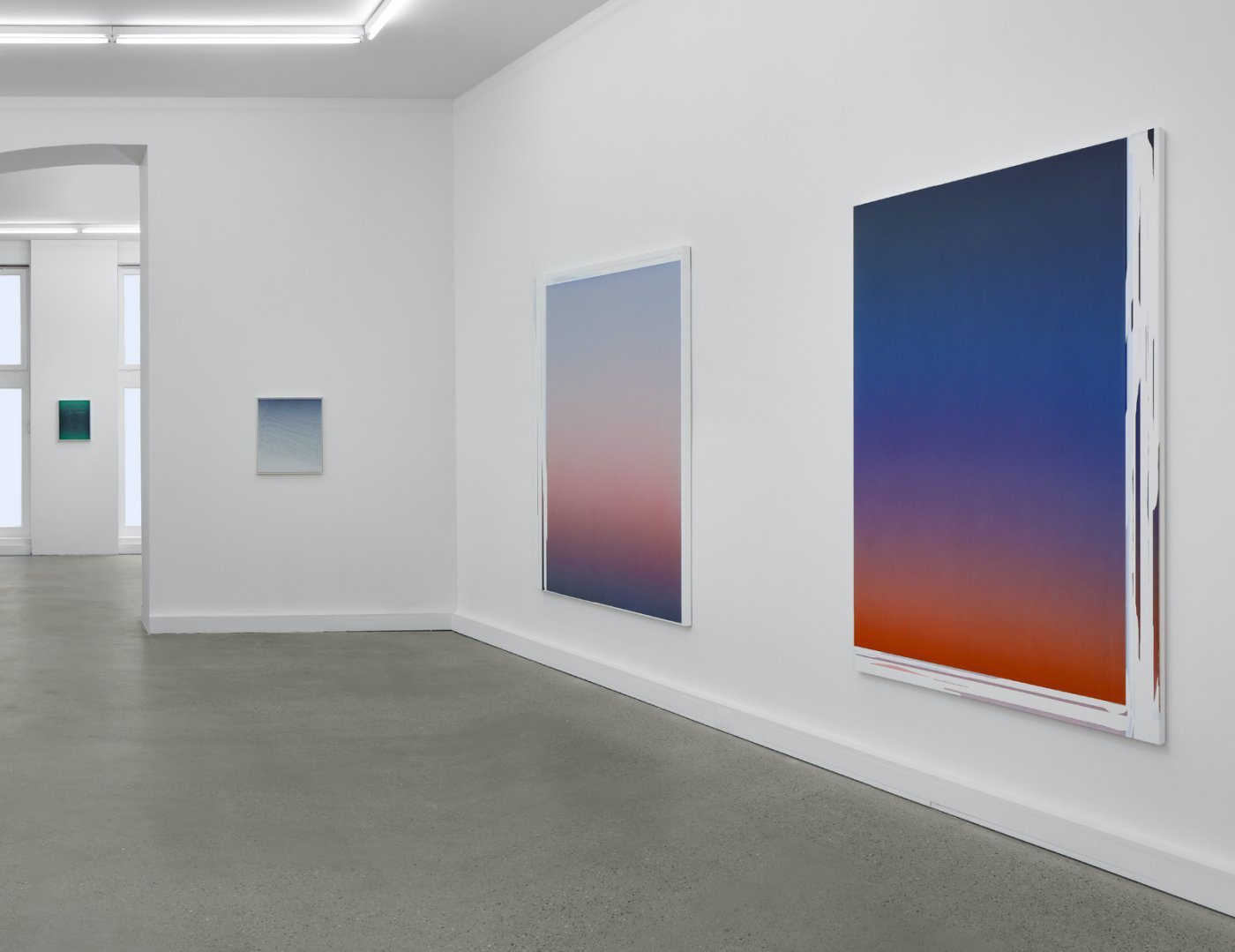 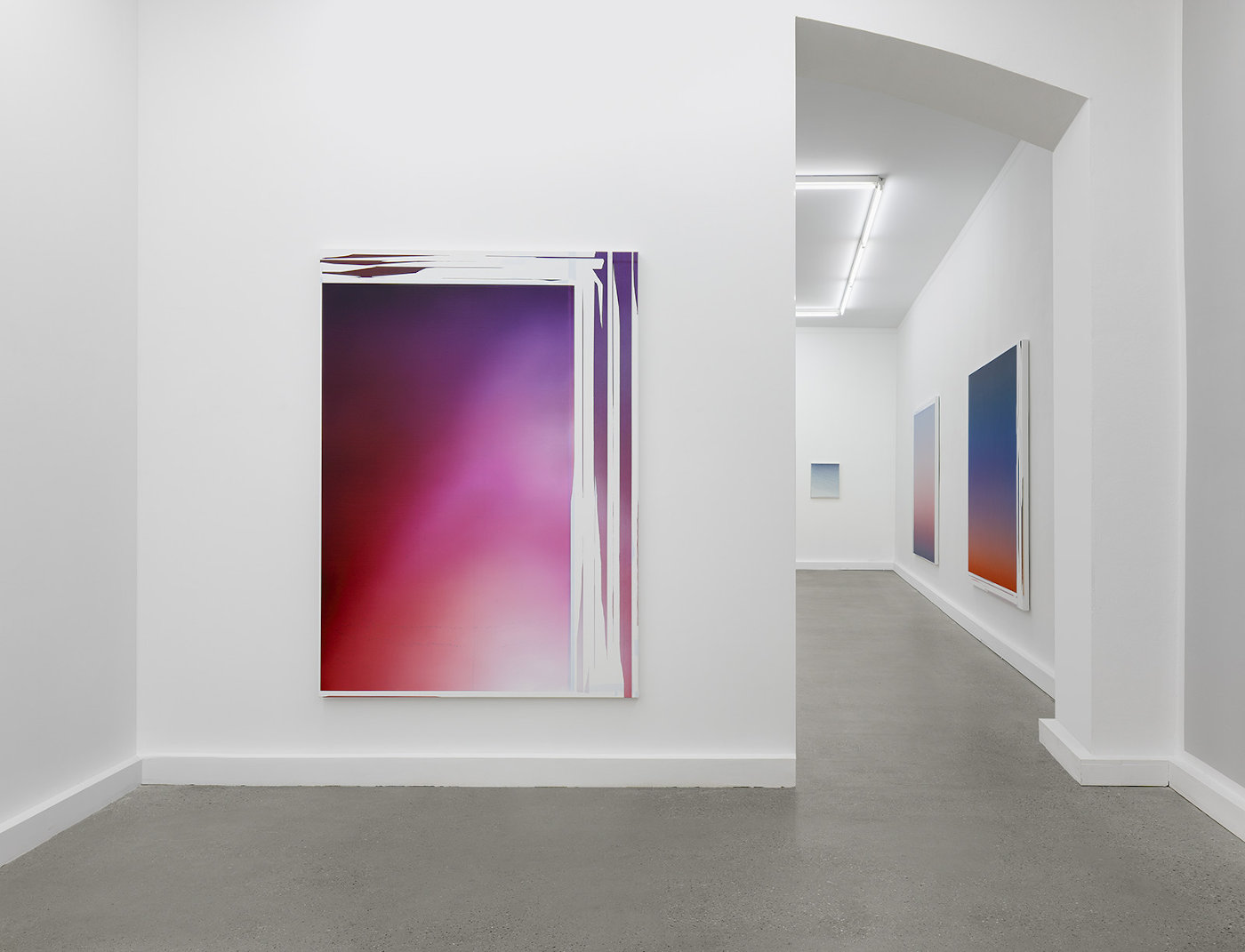 in the new age of the “Coroncene”, as the journalist Ingo Arendt describes our paradoxical life situation not without humour, we are convinced that art is able to create social proximity – even beyond the distance and preferably together with you in front of the original work of art!

Accordingly, we are very pleased to announce our third solo show with the Leipzig artist BENEDIKT LEONHARDT. “PERLI NOISE” presents his latest paintings – and this after our postponement now at the start of the Art Week in Berlin!

Benedikt Leonhardt’s paintings are proof of the self-assertion of excessive painting. His exhibition title “PERLI NOISE” refers to a term borrowed from computer-generated image synthesis and thus refers directly to the structural openness of his painting.

In place of the superimposition of frequencies in the digital, Leonhardt places the compression of color. The gaze penetrates the surface of the polychrome canvases, misses the semi-transparent layers of paint interrupted by the partially readable textures and fasciae in the picture, which, like snapshots in fractal noise, draw attention. An imaginary pictorial space opens up to the viewer and he dives into the absolute transformation.

While “PERLI NOISE” represents the module for the creation of randomly generated landscape topologies in the digital image genesis, Leonhardt’s painting also creates its own virtual world without any reference to real object templates. The harmony of the digital colour values cyan, magenta, yellow mixed with white and black creates a beauty of the picture which, from a philosophical point of view, does not want to be understood either in terms of a quality of form or in the context of the discourse of abstract painting. Neither do the random tear-off traces of the adhesive tape remains serve as a superficially conceived composition. Rather, the artist is concerned with the representation of the picture in its processuality.

Leonhardt’s painting fascinates by its colouristic seduction power, created in long working phases. A moment of temporality can be experienced in the silent picture of the painting – freely according to Tennessee Williams’ perception “time is the longest distance between places”…

We appreciate the fact that we can look forward to a successful cooperation in these unsettled times. It began in 2014 with our first encounter with Leonhardt’s paintings in his studio in Leipzig. Inspired by the power of painting and his unconventional image setting, we invited the young artist to our Berlin gallery for his first solo show. Collectors, curators and the press became interested. In 2016 Benedikt Leonhardt was chosen as the 10th “LVZ Prize Winner” by the Leipziger Volks Zeitung.

He held his first institutional solo show at the MdBK Leipzig including his directly out-of-print catalogue. Leonhardt is now known nationally, which is due in part to his participation in the major theme exhibition “NOW! Young Painting in Germany”, which was on display from 2018-2019 in the museums in Wiesbaden and Bonn as well as in the Kunstsammlungen Chemnitz. The exhibition “NOW!” is currently on display at the Deichtorhallen in Hamburg and can be visited until September 6th.