Anna Meliksetian and Michael Briggs present Light vulnerable objects threatened by eight cement bricks, an installation by Bas Jan Ader (b. 1942 – missing at sea 1975). This exhibition is the first time the installation / performance has been presented since its debut at the Chouinard Art Institute (now the California Institute of the Arts) in June 1970. 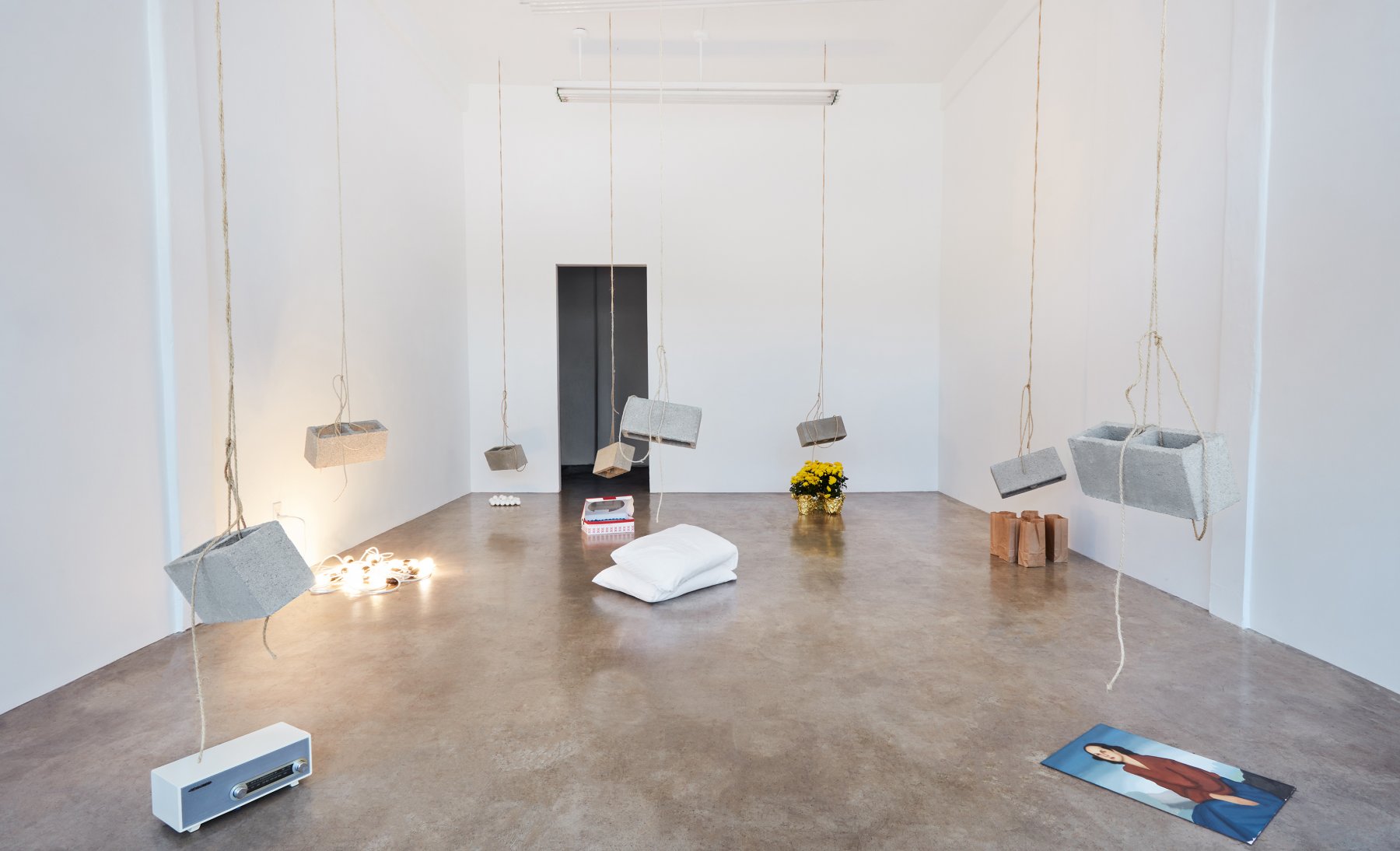 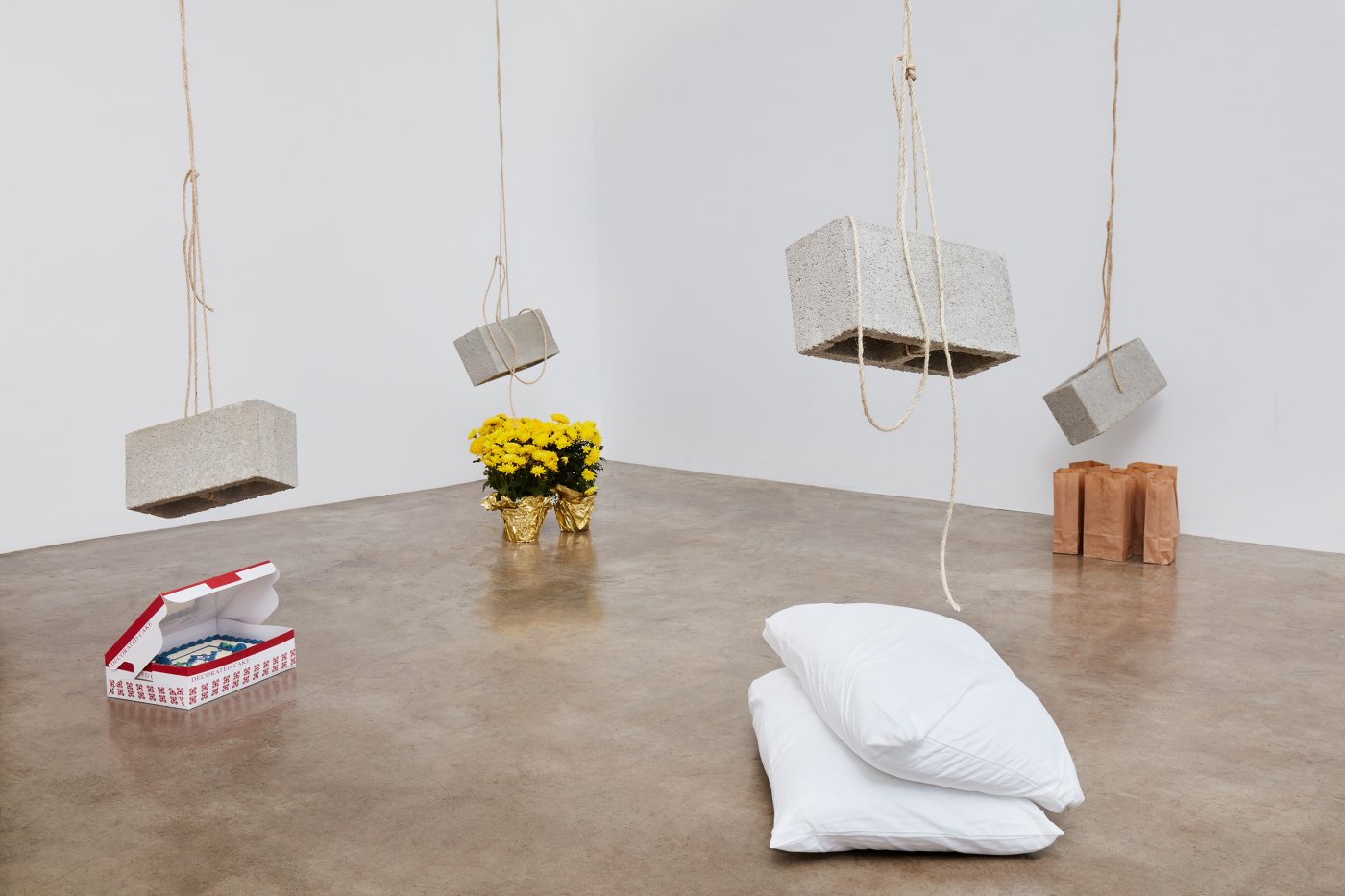 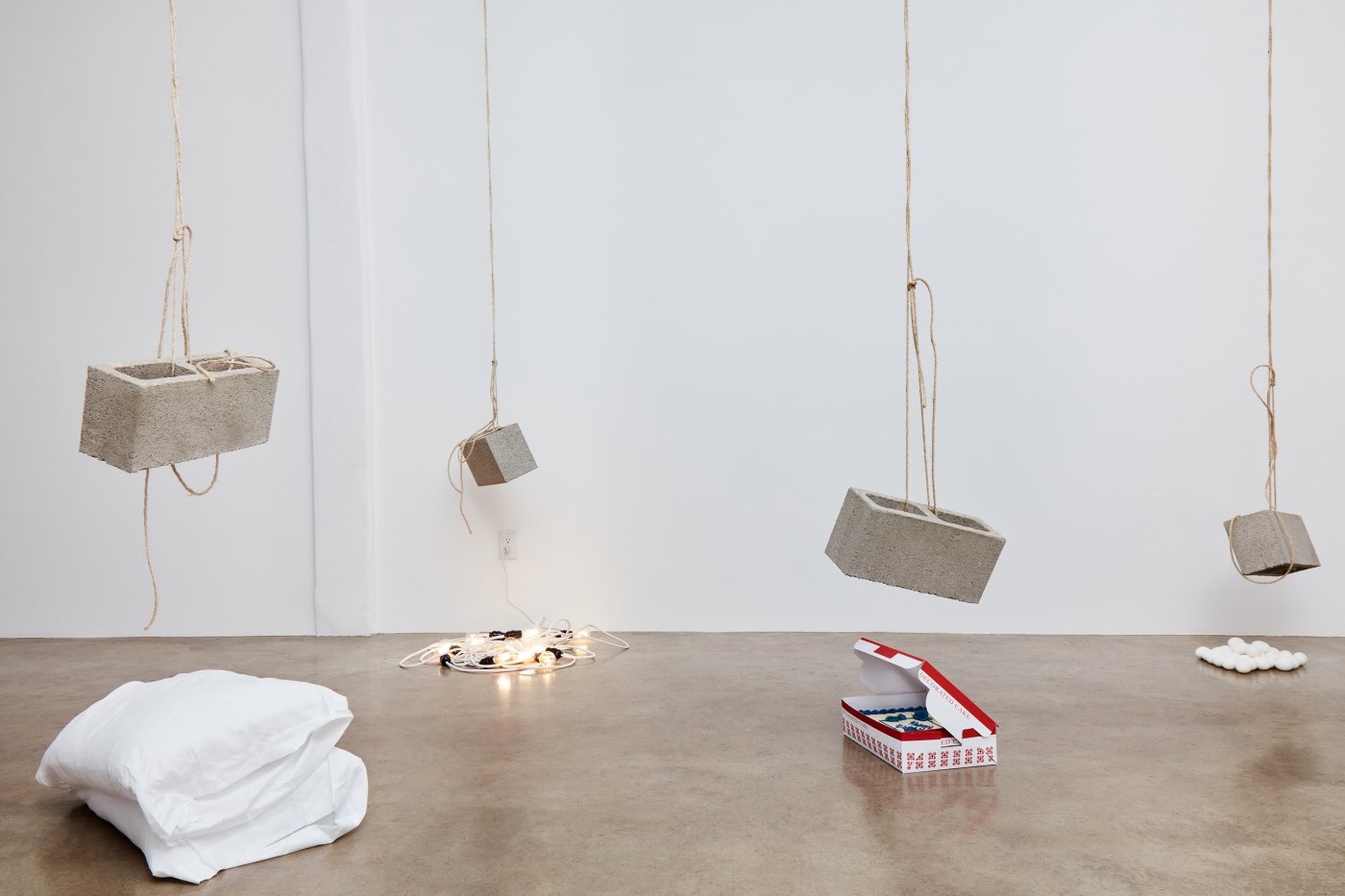 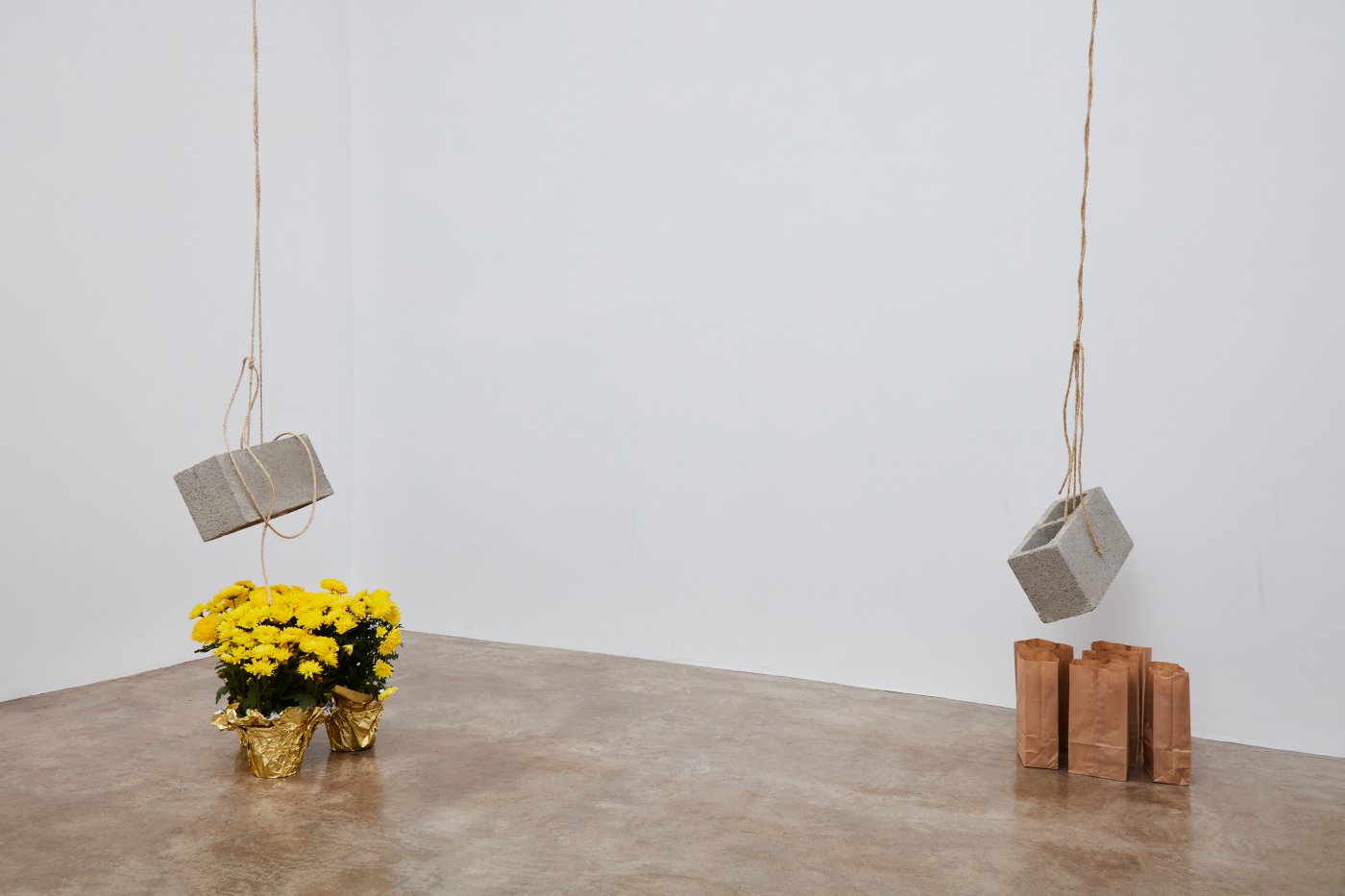 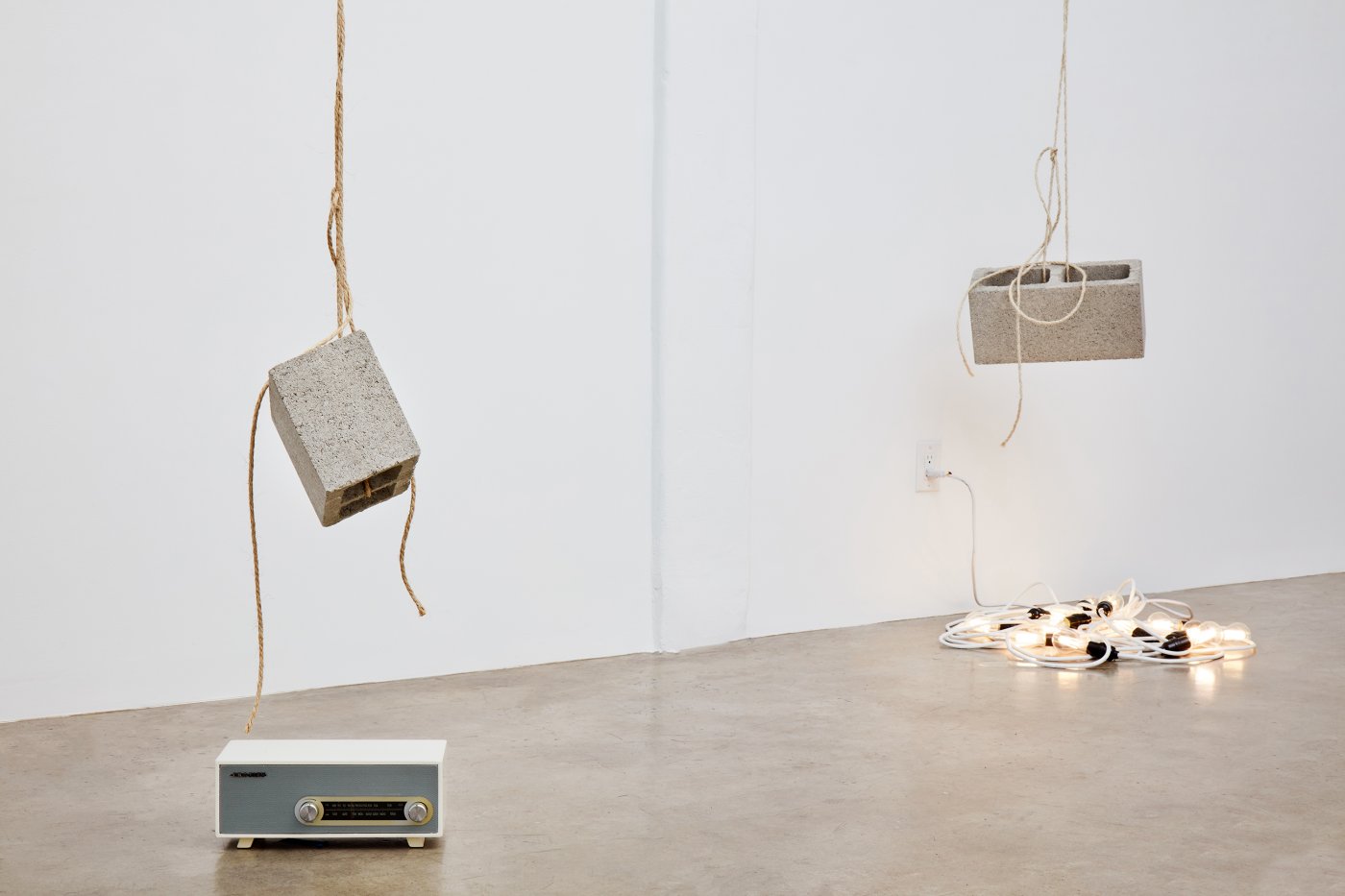 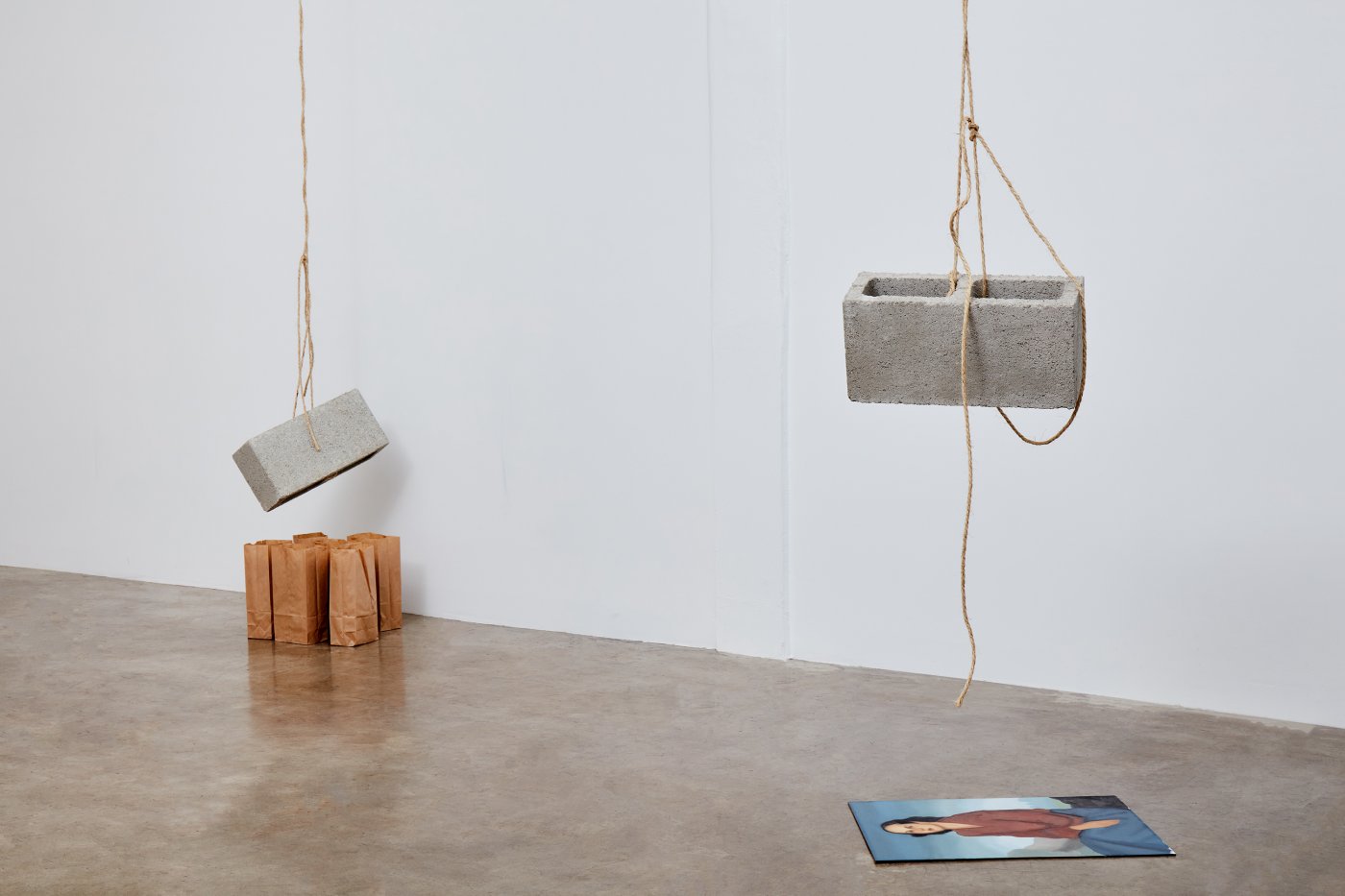 The installation is comprised of eight cement cinder blocks suspended, slightly off kilter and precariously, from the ceiling by lengths of rope. Below each of the blocks sits a grouping of fragile objects: an oil painting, a transistor radio, a string of illuminated lightbulbs, two pillows, a group of empty beer cans in brown paper bags, a sheet cake with the inscription Happy Birthday on it, in its box, a group of eggs, and three pots of flowers. The blocks loom ominously above the objects, casting shadows on the objects below and threatening to fall on top of them and crush them at any moment. At the end of the exhibition, the artist, or in this case a stand in, adds a performative element, cutting each of the ropes causing the cement blocks to crash into the items below, destroying them.

The installation was first presented in 1970 which was an important and prolific year in Ader’s career. The theme of the Fall was a major concern of the work at this moment. It was at this time he made the seminal films Fall 1, Los Angeles and Fall 2, Amsterdam among other important works. The installation presages the 1971 film work Nightfall in which the artist struggles to lift and ultimately drops concrete slabs on to illuminated light bulbs below from shoulder height, extinguishing them and falling into darkness. The themes of the Fall, used metaphorically as well as literally, precariousness, failure, the futility of resisting forces of nature like gravity, as well as ideas of impending danger, doom and risk are apparent in these works including Light vumlnerable objects… where Ader puts these ideas into three dimensional, sculptural, and material form.

Where this piece differs from Fall 1, Fall 2, and Nightfall is that Ader himself is not the protagonist around which this looming threat revolves. Instead, this tension is focused on the objects and Ader himself becomes responsible for their destruction when he cuts the rope in an act of imposing his will upon the environment.

Bas Jan Ader was one of the most significant and influential artists of his generation, his work fusing European and Californian conceptual positions. Working in film, photography, installation and performance, his influence continues to be felt today. Past solo exhibitions include shows at the Stedelijk Museum, Amsterdam, the Kunsthalle Basel, the Camden Art Center, London, the Centro Galego de Arte Contemporánea / CGAC, Santiago Compostela, Spain and the Museo d’Arte Moderna di Bologna / MAMBO, Italy as well as the Venice and Sao Paolo Biennials in 2017 and 2012 respectively. Recently his work was featured in a major three-person exhibition at The Modern, Fort Worth, Texas Disappearing – California c. 1970: Ader, Burden, Goldstein curated by Philipp Kaiser (catalog available).

Ader’s work has also been exhibited recently in group shows at the Los Angeles County Museum of Art, the Barbican Art Gallery, London, Martin-Gropius-Bau, Berlin, FRAC Nouvelle-Aquitaine MÉCA, Bordeaux, the Hamburger Kunstahalle, Hamburg and the National Gallery of Australia among many others.

Special thanks to Sylva K. Ichlokmanian, Alex Kupczyk, and Robert and Hector at Lightbulbs Unlimited for their kind assistance.