Barthélémy Toguo is a traveller, crossing boundaries of all sorts as his vision evolves. His travels are not just physical – though he has been to many places – but are also concerned with crossing the various borders, barriers and boundaries that human beings construct in their minds. He uses watercolour painting, photography, sculpture, installation, theatre and performance to try to explain to himself and to his audience the spectrum of human triumphs and tragedies he has encountered.
Chris Spring, Curator

HdM GALLERY London presents ‘Human Nature’, a solo show by artist Barthélémy Toguo and curated by Chris Spring. It is Barthélémy Toguo’s first solo show in London, and highlights a key player in the unfolding richness of contemporary visual practice by artists of African heritage, increasingly valued and sought after in the international arena. 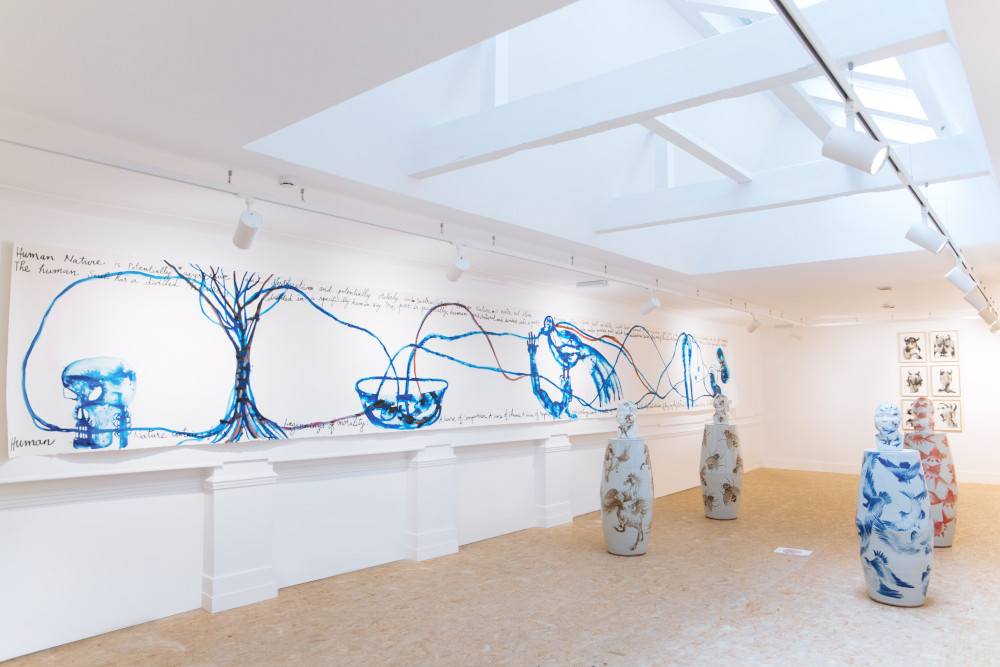 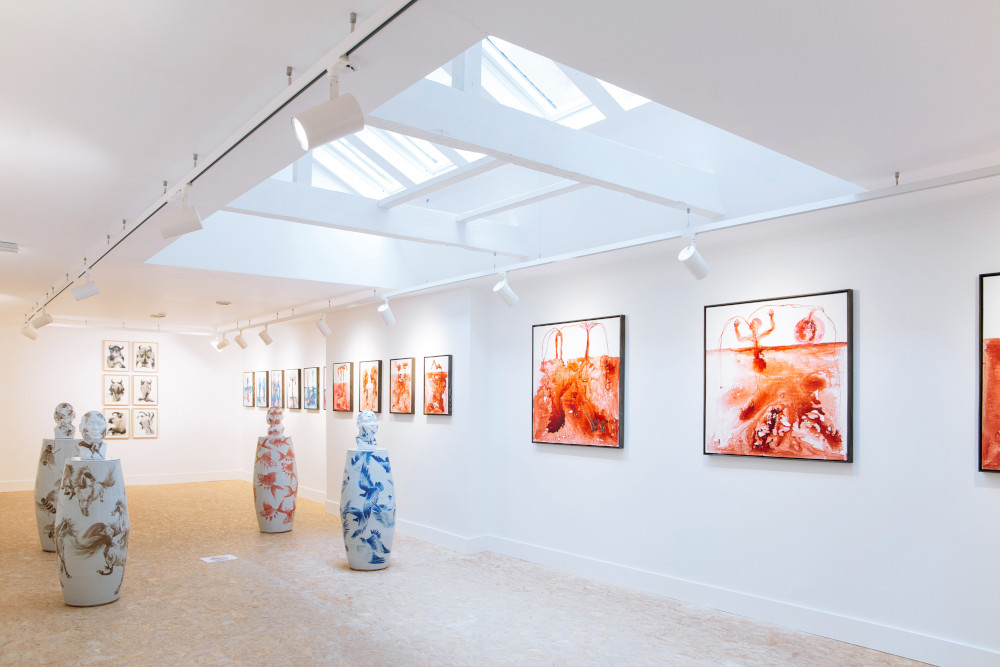 Once met, never forgotten, Toguo has made a remarkable contribution to this development, both through his own visual art practice and the creation of the extraordinary Bandjoun Station in his native Cameroon, a cultural centre which combines art, education and agriculture in and around a building which utilises the technological wizardry of the 21st century while paying homage to ancient architectural styles. Toguo’s new HdM show, curated by former British Museum Africa specialist, Dr. Chris Spring, and provocatively titled ‘Human Nature’, helps us not only to see how his aesthetic has evolved over the past decade – but also how his guiding principles have remained the same:

A key feature of the show – exhibited in the UK for the first time – is Toguo’s ‘Fragile Bodies’ series of large, porcelain vessels which he created in Jingzhen, China. Each is painted with representations of different creatures and topped with a cast of the artist’s own head. While Toguo’s vessels acknowledge the ongoing connections between Africa and China and the supreme achievements of China within the arts, the African heads on the ‘Fragile Bodies’ remind us that it was in Africa that the capacity to think symbolically, to create art and to become modern humans evolved.

Alongside these sculptural works Toguo will show a series of his celebrated watercolour paintings on the subject of human nature.

Barthélémy Toguo
Was born in M’Balmayo, Cameroon, in 1967. He currently lives and works between Paris, France and Bandjoun, Cameroon.
Toguo was shortlisted for the 2016 Prix Marcel Duchamp and was included in the group exhibition of finalists at the Centre Pompidou, Paris. He has participated in numerous international biennials, including the 56th Venice Biennale (2015). He was recently featured in Intriguing Uncertain- ties, The Parkview Museum Singapore, travelling to Beijing; Art/Afrique Le Nouvel Atelier, Fondation Louis Vuitton, Paris; and Fragile State, Pinchuk Art Centre, Kiev, Ukraine. In 2011, Toguo was made a Knight of the Order of Arts and Literature in France. His works are included in public collections worldwide, including the Tate Modern, England where the work ‘Purification’ (2012) is on display now; Centre Pompidou, France; Musée d’art contemporain de Lyon, France; Studio Museum Harlem, New York; and MoMA, New York. Both artist and activist, Toguo also founded a non-profit art centre ‘Bandjoun Station’ in 2008 in Cameroon.

Courtesy of the artist and HdM Gallery