“Suddenly there was a combustion of interaction between the cast, polished or black bronze and the so , implied mo on of the skirt, which took on the characteristics of the bronze, solidifying into a column of graphic line and mass that seemed to support the metal, while the bronze melted into a so mass of interacting light in motion. The materials had come to some kind of unplanned peace treaty on their own and fused into one entity. Alchemy or chance? As this happened in case a er case (but not always), I figured it was luck but not happenstance. I had my steles. I decided to dedicate them to the assassinated civil rights leader Malcolm X.”
– Barbara Chase-Riboud, 2014

“I don’t favor violence. If we could bring about recognition and respect of our people by peaceful means, well and good. Everybody would like to reach his objectives peacefully. But I’m also a realist. The only people in this country who are asked to be nonviolent are black people.”
– Malcolm X, January 1965

Michael Rosenfeld Gallery presents Barbara Chase-Riboud—Malcolm X: Complete, an exhibition celebrating her now complete series of monumental bronze and fiber sculptures that the artist has created over the last half-century in honor of the slain human rights leader. 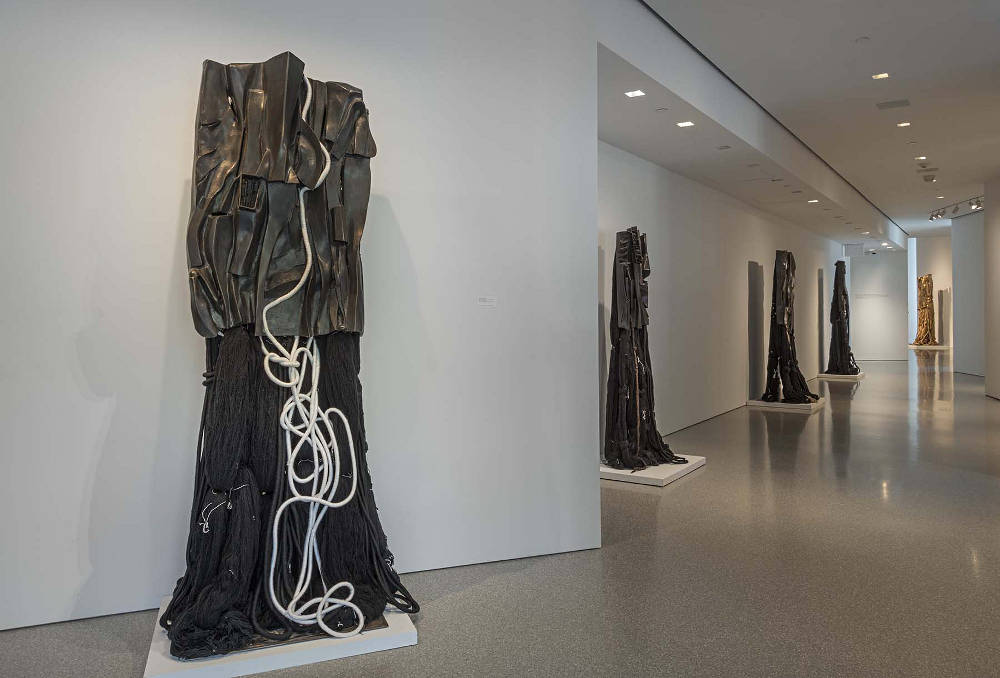 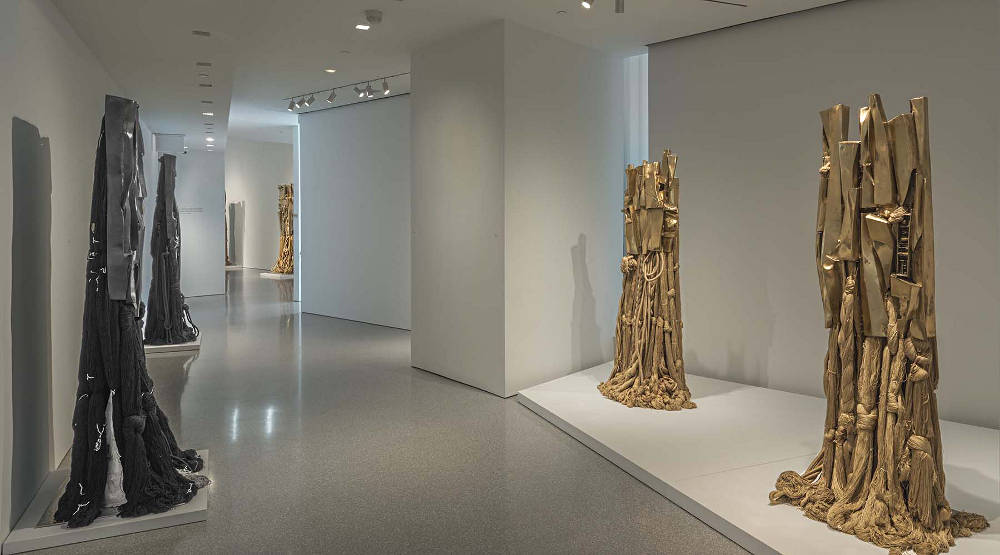 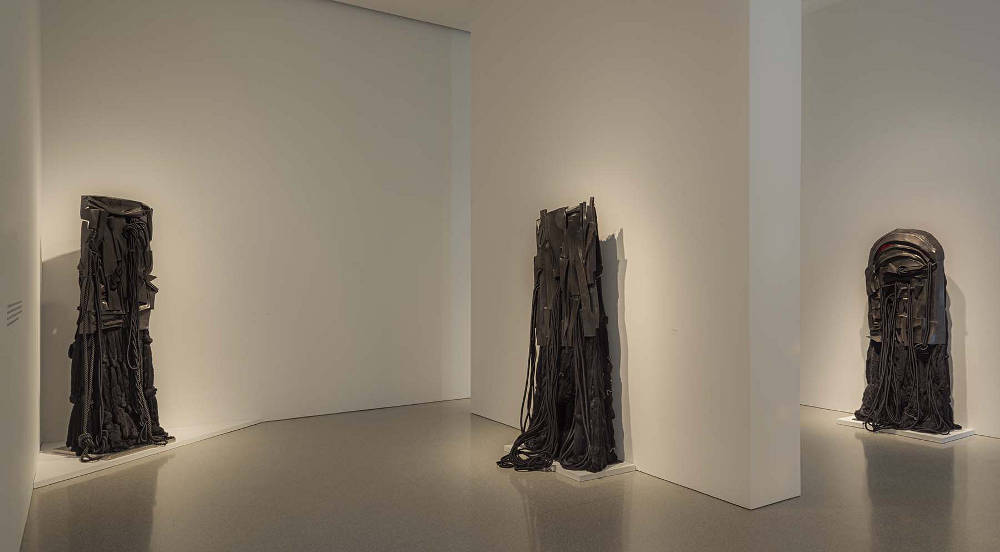 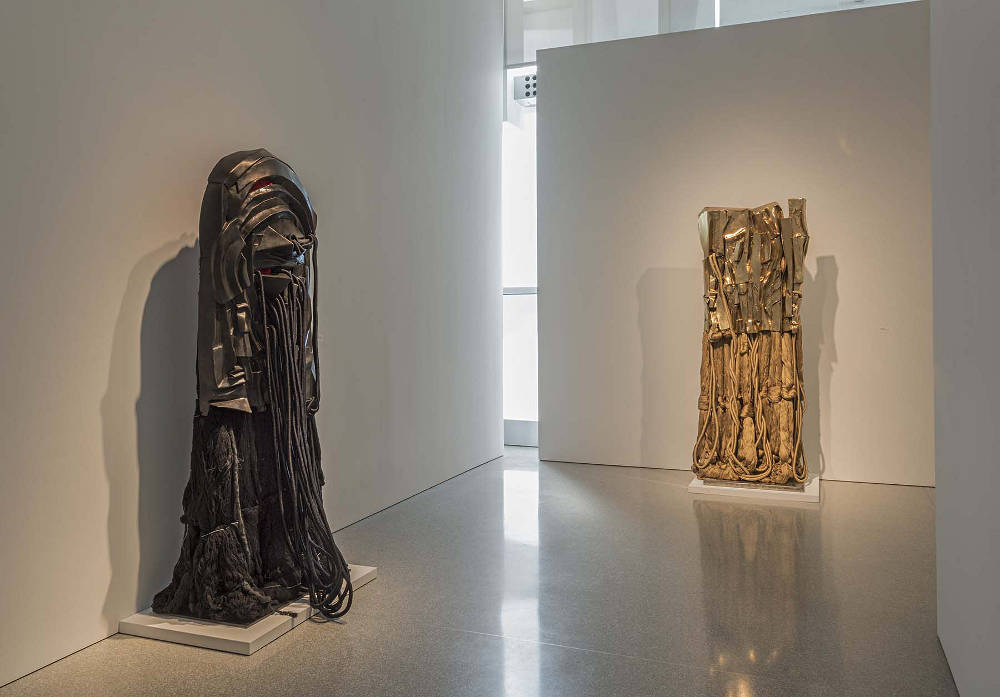 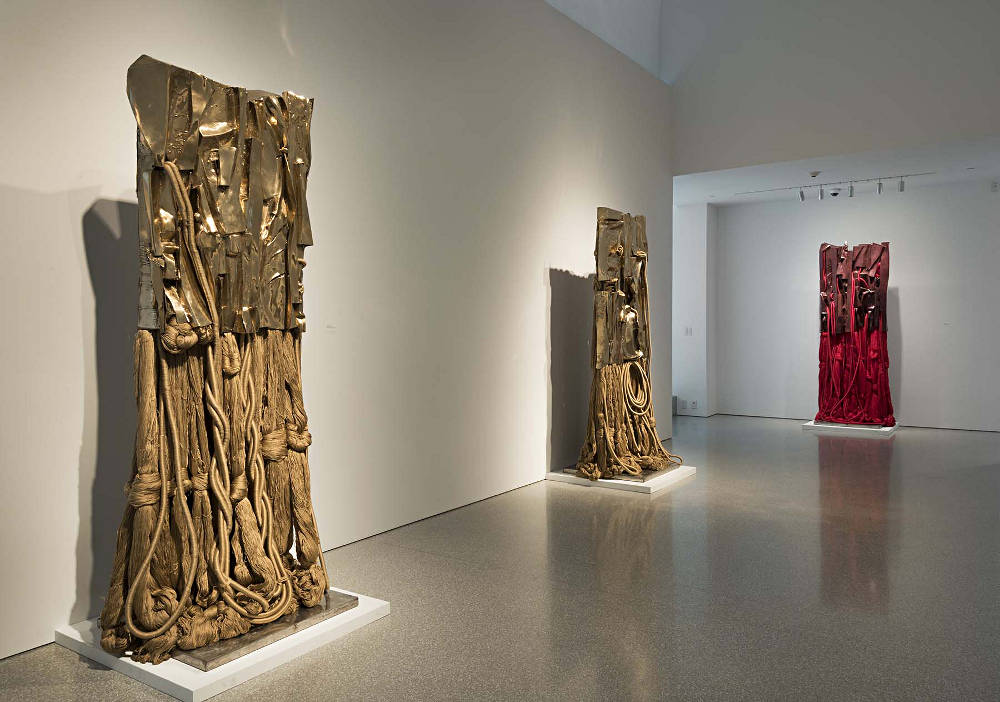 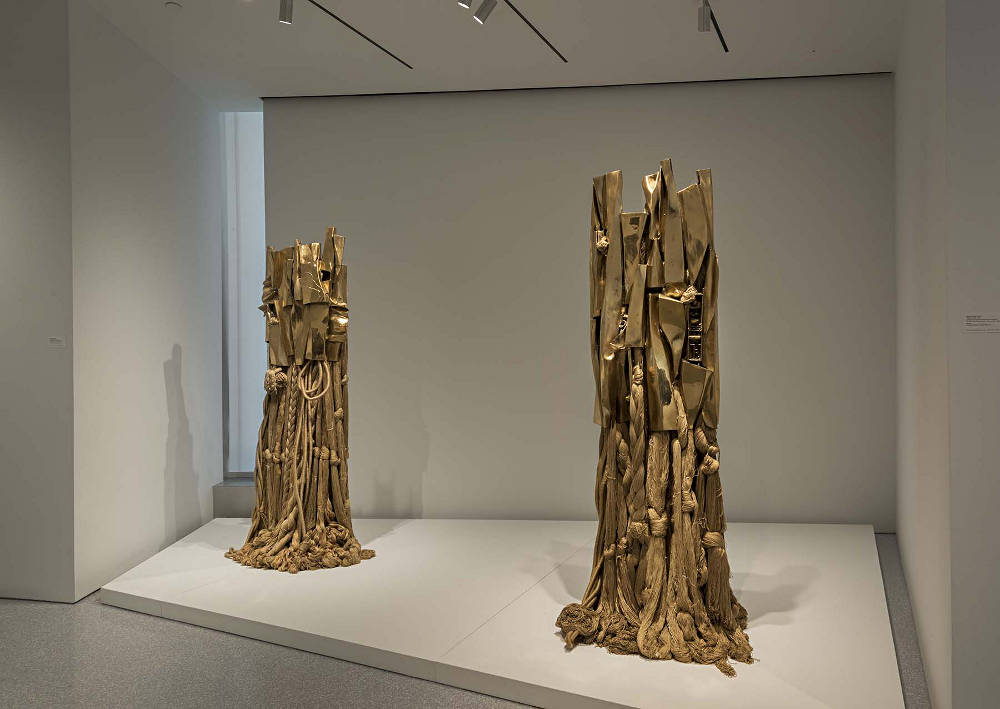 The exhibition, her second large-scale solo show at the gallery, will be accompanied by a fully illustrated color catalogue featuring a recent interview with the artist by Carlos Basualdo, the Keith L. and Katherine Sachs Curator of Contemporary Art at the Philadelphia Museum of Art.

For over five decades, Barbara Chase-Riboud has created abstract art with a deep and nuanced understanding of history, identity, and a sense of place. Her celebrated work operates on several dichotomies that have become central to her practice: hard/so , male/female, flat/three-dimensional, Western/non-Western, stable/fluid, figurative/abstract, powerful/delicate, brutal/beautiful, violence/harmony. In 1958, she developed her own particular innovation on the historical direct lost-wax method of casting bronze sculpture. Creating thin sheets of wax that she could bend, fold, meld, or sever, she developed singular models that she would then bring to a local foundry for casting. This new approach to a centuries-old process enabled her to produce large-scale sculptures comprised of ribbons of bronze and aluminum. In 1967, she added fiber to these metal elements, devising the seemingly paradoxical works for which she is most renowned — sculptures of cast metal resting on supports hidden by cascading skeins of silk or wool so that the fibers appear to support the metal.

In 1969, Chase-Riboud created Monument to Malcolm for the 7 américains de Paris show held at the Galerie Air France in Manhattan. This work, as art historian Pellom McDaniels writes: “marked the arrival of her signature style. It appeared to represent a fallen robe or garment on a surface [reminiscent of] marble…The composition and presentation reached back to Chase-Riboud’s observations of the reclining stone Buddhas…in China that she described as ‘beautifully calculated pattern of flat overlapping folds that are incised as drawing rather than carved as sculpture.’”

The idea to develop a series of steles in tribute to Malcolm X—who had been assassinated in New York City on February 21, 1965—was sparked in response to the energy and political/cultural discourse Chase-Riboud experienced in the summer of 1969 at the Pan-African Cultural Festival. Held in the capital of Algeria seven years after the country’s long and bloody struggle for independence, the week-long festival brought together artists, writers, and activists from throughout the African diaspora. Attending panels on resistance to colonial and neocolonial exploitation, Chase-Riboud was given a view of the American civil rights movement through the lens of a global struggle against racism and the economic, cultural, and geopolitical systems that bene ed from and perpetuated it. This global consciousness was consistent with Malcolm X’s own conviction that the struggle for black civil rights in the United States would be better framed as a struggle for human rights in part because it would shift the jurisdiction for the movement from the United States, a country slow (at best) to respond to demands for full citizenship for African Americans, to the United Nations. This global reframing of the question of equality would also open up avenues for “the dark-skinned people of the world” to support each other in holding accountable all the nations that had signed onto the 1948 Universal Declaration of Human Rights, but that routinely and flagrantly disregarded such lofty principles in the domestic policing of “minority” populations.

Returning to France after that summer, according to McDaniels, Chase-Riboud “assembled the pieces of her vision into a reality.” Using her lost-wax technique, Chase-Riboud created massive bronze figures that she mounted onto bronze bases. She then “played with organic elements made of knotted and braided silk and wool. The combination and presentation of materials were not only eloquent and regal; they were arresting and revolutionary in their construction and execution. The inversion of the tensile qualities of the materials used and the appearance of the bronze form levitating was groundbreaking. The three resulting works (Malcolm #2, Malcolm #3, and Malcolm #4) were expressions of her monumental vision and deep reverence for the fallen leader.” In 1970, the Bertha Schaefer Gallery in New York City exhibited the Malcolm X series along with thirteen additional sculptures and sixteen pieces of jewelry. That same year, the Hayden Gallery at the Massachuse s Institute of Technology (MIT) in Cambridge presented Monuments to Malcolm X (April 10-May 3, 1970).

After creating the first four works in 1969, Barbara Chase-Riboud did not return again to the subject of Malcolm X until 2003, when she made Malcolm X #5, #6, #7, and #8. From 2007 to 2008, she worked on Malcolm X #9, #10, #11, #12, and #13 and this past year, in her eighties, she returned to the foundry to complete Malcom X #14, #15, #16, #17, #18, #19, and #20. In 2013, the Philadelphia Museum of Art mounted Barbara Chase-Riboud: The Malcolm X Steles, featuring five works from the series and numerous related drawings and sculptures. Curated by Carlos Basualdo and John Vick (Exhibition Assistant in Modern and Contemporary Art), the exhibition received great critical acclaim and traveled to the Berkeley Art Museum and Pacific Film Archive in the spring of 2014.

Barbara Chase-Riboud—Malcolm X: Complete will be the first time that fourteen of the twenty steles are shown together. Michael Rosenfeld Gallery is grateful to the many private collectors and museums throughout the world who have graciously loaned their works to the exhibition.

Chase-Riboud’s frequent return to Malcolm X as a subject over the past fifty years is an indica on of his continued relevance for our contemporary world. Although the series of steles may be complete, the work undertaken by Malcolm X and other leaders in the global struggle for human and civil rights is far from being so. This exhibition is not only a contribution to the preservation of the memory of Malcolm X but also an acknowledgement of the push for global justice that he continues to inspire.