Back to London. A journey through image, time, word and space

Back to London. A journey through image, time, word and space

Mazzoleni reopens its London gallery following the lockdown with the group show Back to London. A journey through image, time, word and space. The exhibition title also suggests the physical return to the gallery of a selection of artworks recently exhibited in international museums and fairs. Historical and contemporary artists are brought together in this show, allowing a number of visual, material or conceptual affinities to emerge. 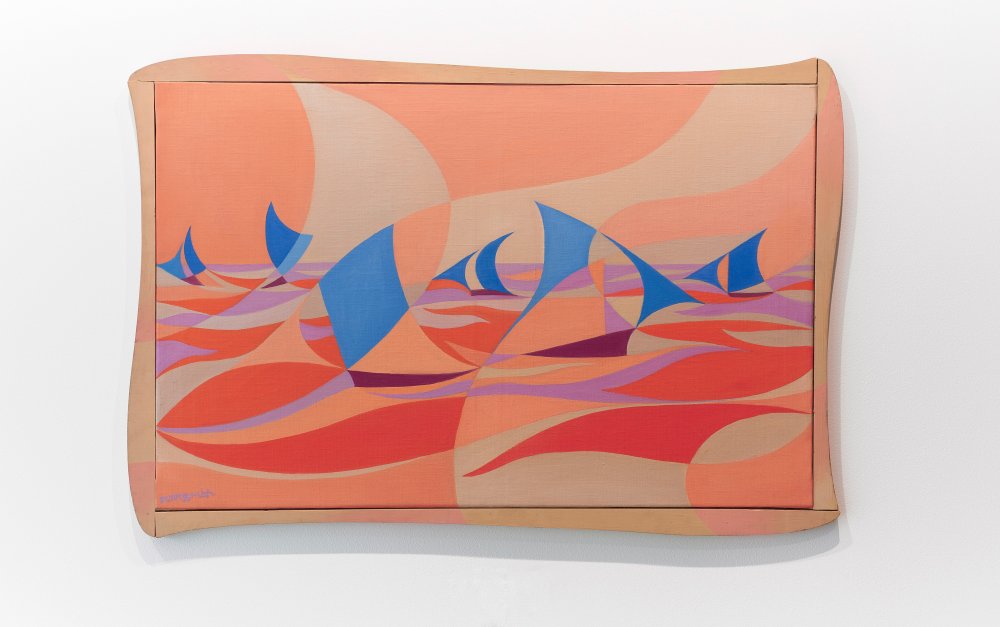 Linee forze di mare – Rosa (circa 1919) by Giacomo Balla (1871-1958) establishes a visual dialogue with the photographic works of Red Regatta by the American artist Melissa McGill (b.1969). This body of works is part of her major public art project Red Regatta, an unprecedented series of four large-scale site-specific performances on Venice’s waterways between May and September 2019.

With his deep interest on different languages and cultures, Alighiero Boetti’s (1940- 1994) developed his visual research throughout his frequent trips to Afghanistan and Pakistan where he encountered highly skilled artisans whom he commissioned to realise his works. Boetti’s “embroidered” verbal-visual compositions combine letters, sentences, colours, and the idea of “time” to achieve a unique form of “depersonalization” of the work; the concept of time is also prominent in his Calendari series.

Along with the works by Vincenzo Agnetti (1926-1981) and Mel Bochner (b. 1940), younger artists such as David Reimondo (b. 1973) and Rebecca Moccia (b. 1992) investigate on the wide meaning of “language”.
David Reimondo’s Etimografia is a macro-project embracing much of his latest research into “language”. The artist has created a synthesis sui generis (featuring ideograms, pictograms and glyphs among other elements) and produced new “graphemes” and new “phonemes”. Each of these “symbols” is the base element of a broader, more variegated project. This project came into being quite naturally as a perennial “work in progress”. One series of pieces is composed of “sculptures” (each around 40x40x6 cm) in wood coloured with ink for professional printers; a choice of matter and materials that brings together past and present, conjugating different operational practices. Reimondo’s utopia is the development of a new language – in the most absolute sense of the term – that overcomes those predefined barriers. Instead in the series Blue-come-back (2019), Rebecca Moccia has created collages with blue-back paper overlaying calligraphic drawings of couples of male and female terms borrowed from Italian politics taken from the series Un linguaggio inaudito (2018). Stratifications of time, images and older works: a reverse manifesto revealing language in all its vulnerability, at risk of dissipation, noise and illegibility.

Made in 1969, Giuseppe Uncini’s (1929-2008) work with bricks and concrete dialogues visually and materially with the “explorations” of Andrea Francolino (b. 1979). Using concrete dust Francolino has “harvested” and “traced” – in negative – the essence and the form of seven “cracks” in the road encountered on his route from Milan to London. Metaphors of fragility like the dusts used transferred and then impressed on paper. Each work comes along with a date, a time and satellite coordinates that allow the precise space and time of his action to be identified. The coordinates are, in fact, the titles of the works and the observer may work their way back to the original location, while the real cracks transform with the passage of time.