Artist in Residency: Pu Yingwei. A Study in Scarlet: The Re-origin of Revolutionary Realism

Artist in Residency: Pu Yingwei. A Study in Scarlet: The Re-origin of Revolutionary Realism

Pu Yingwei
A Study in Scarlet: The Gentleman of Communist Capitalism, 2021

Pu Yingwei
A Study in Scarlet: When the World Becomes a Plantation, 2021

Pu Yingwei
A Study in Scarlet: Dominators of the Red Planet, 2021

Pu Yingwei
Red Expedition: Farewell to the Past, 2021 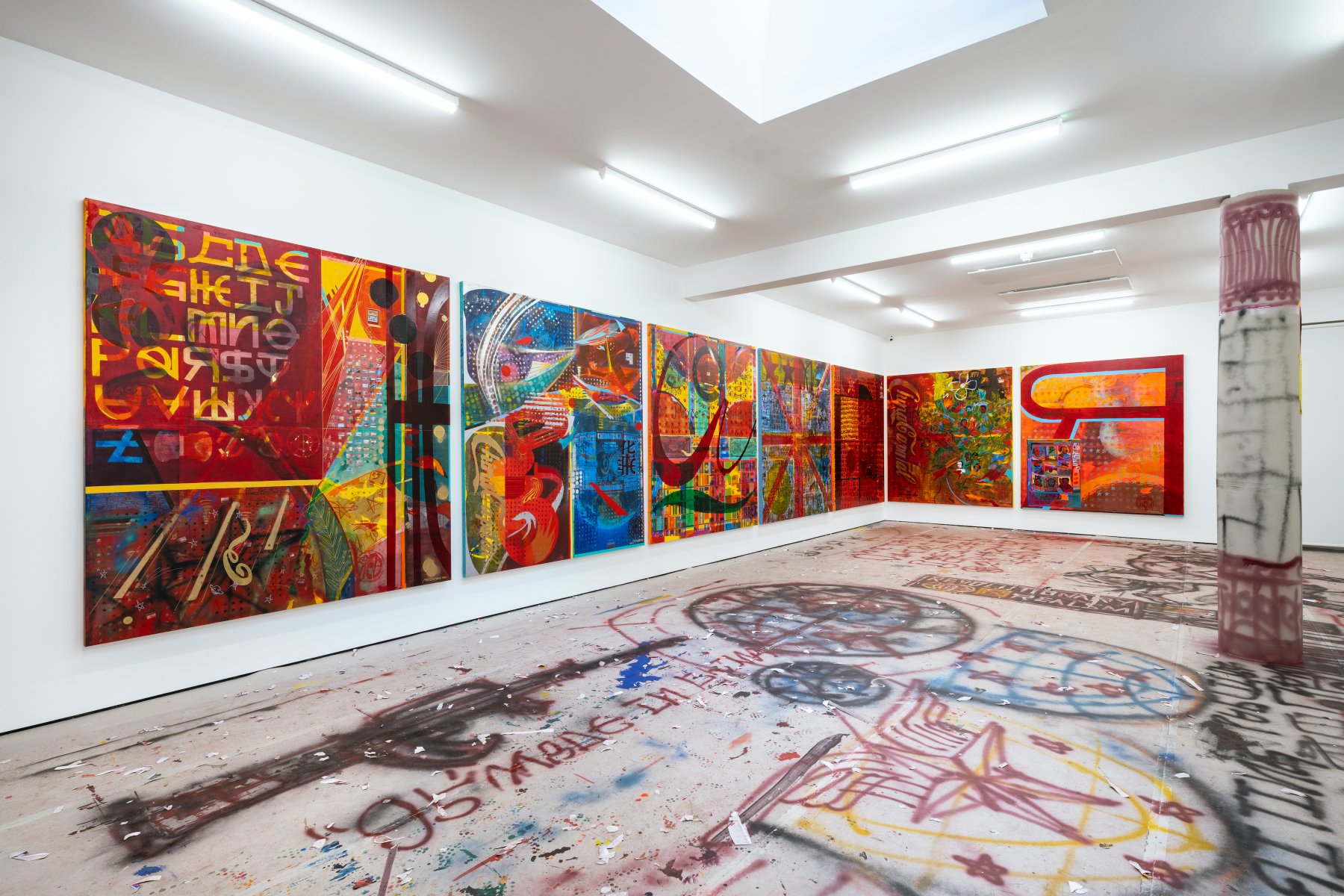 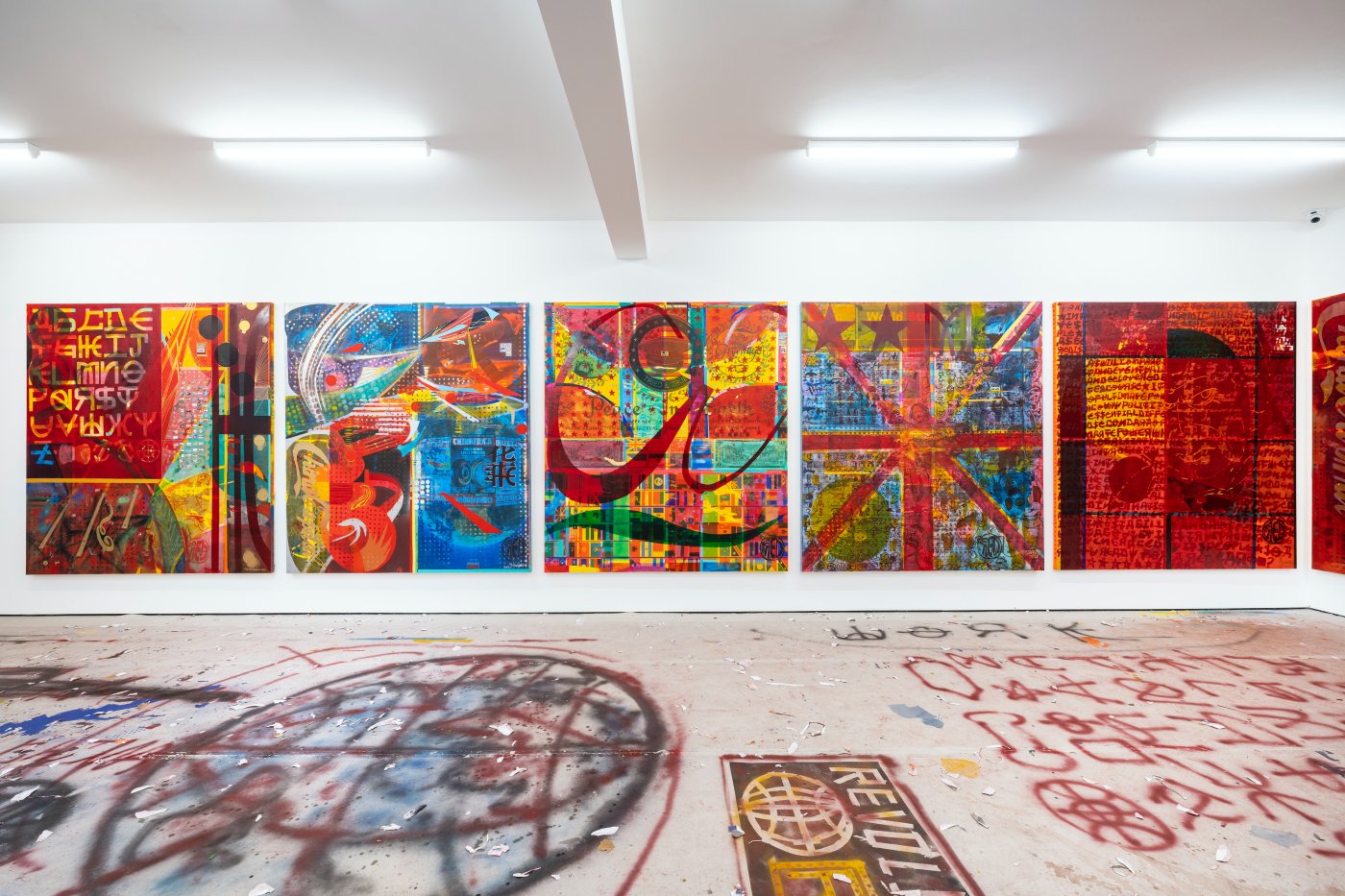 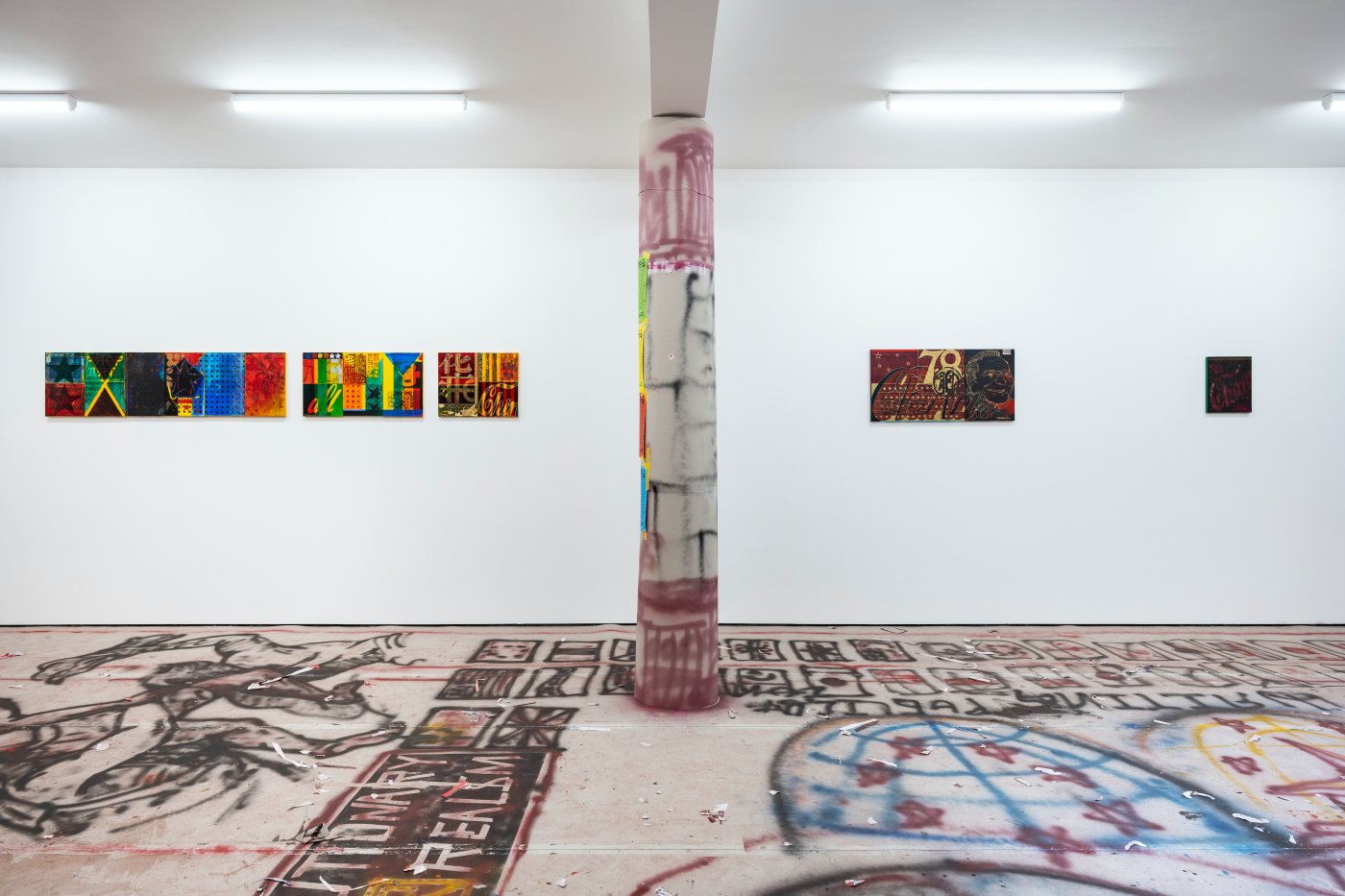 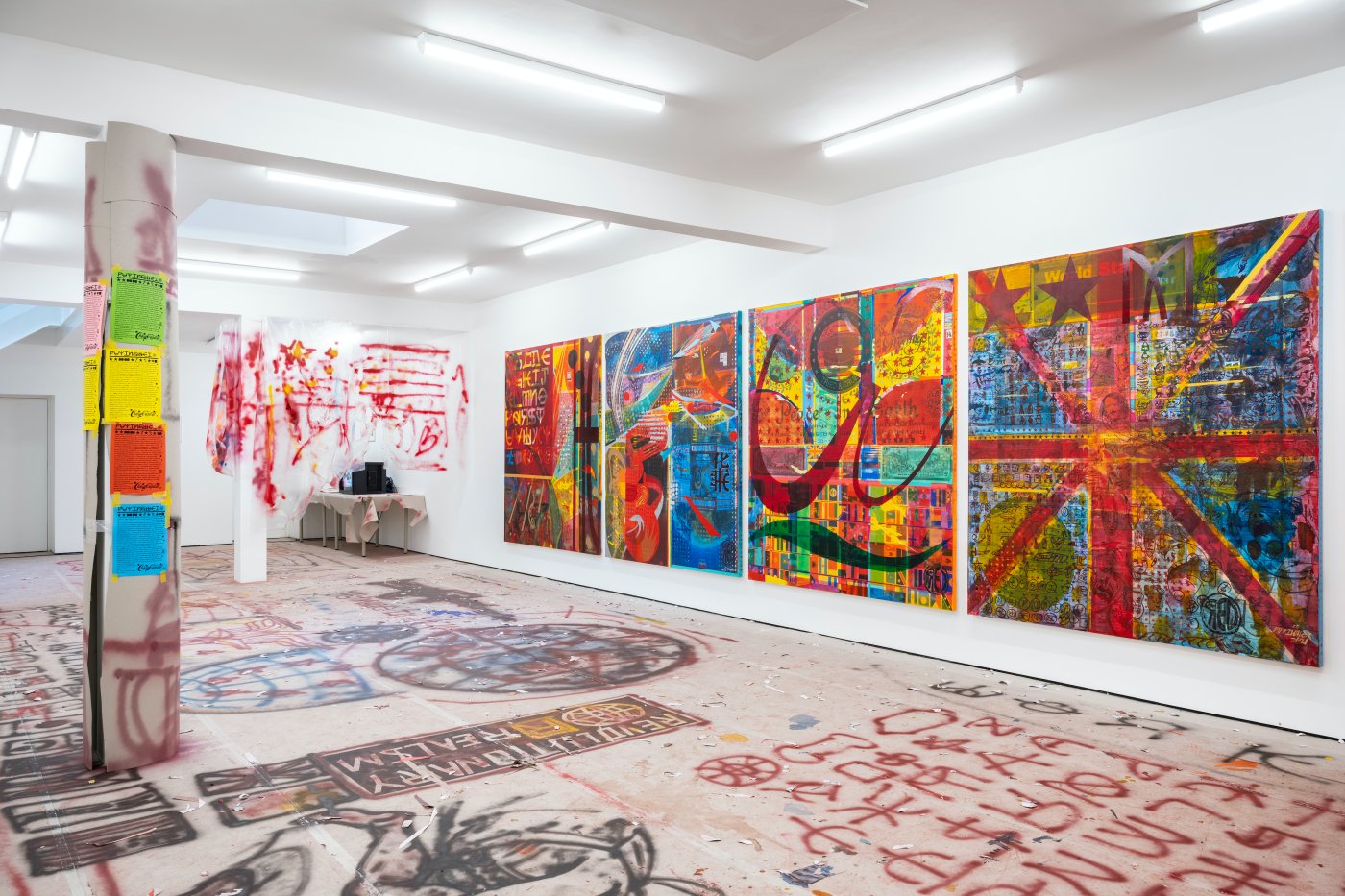 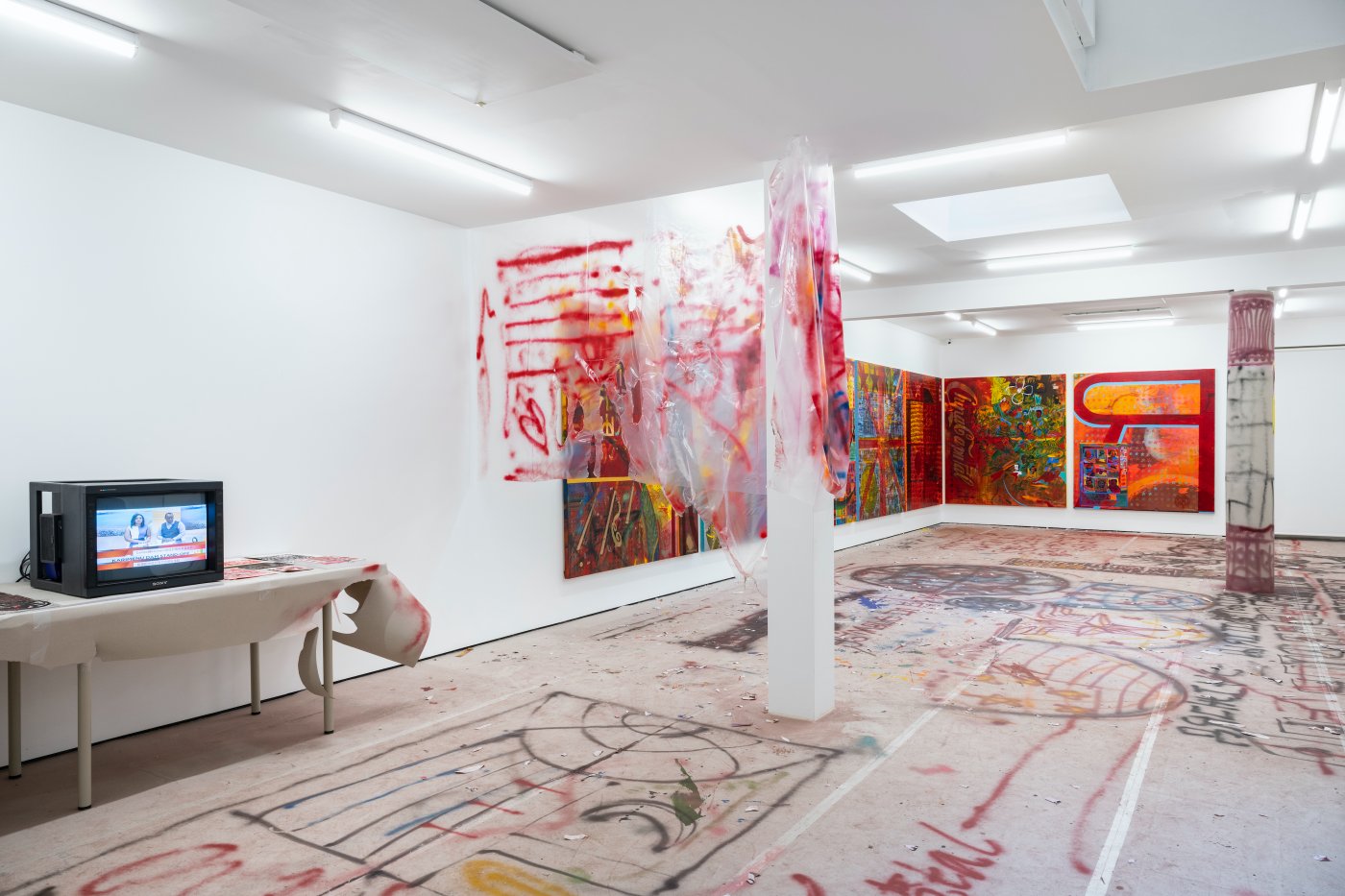 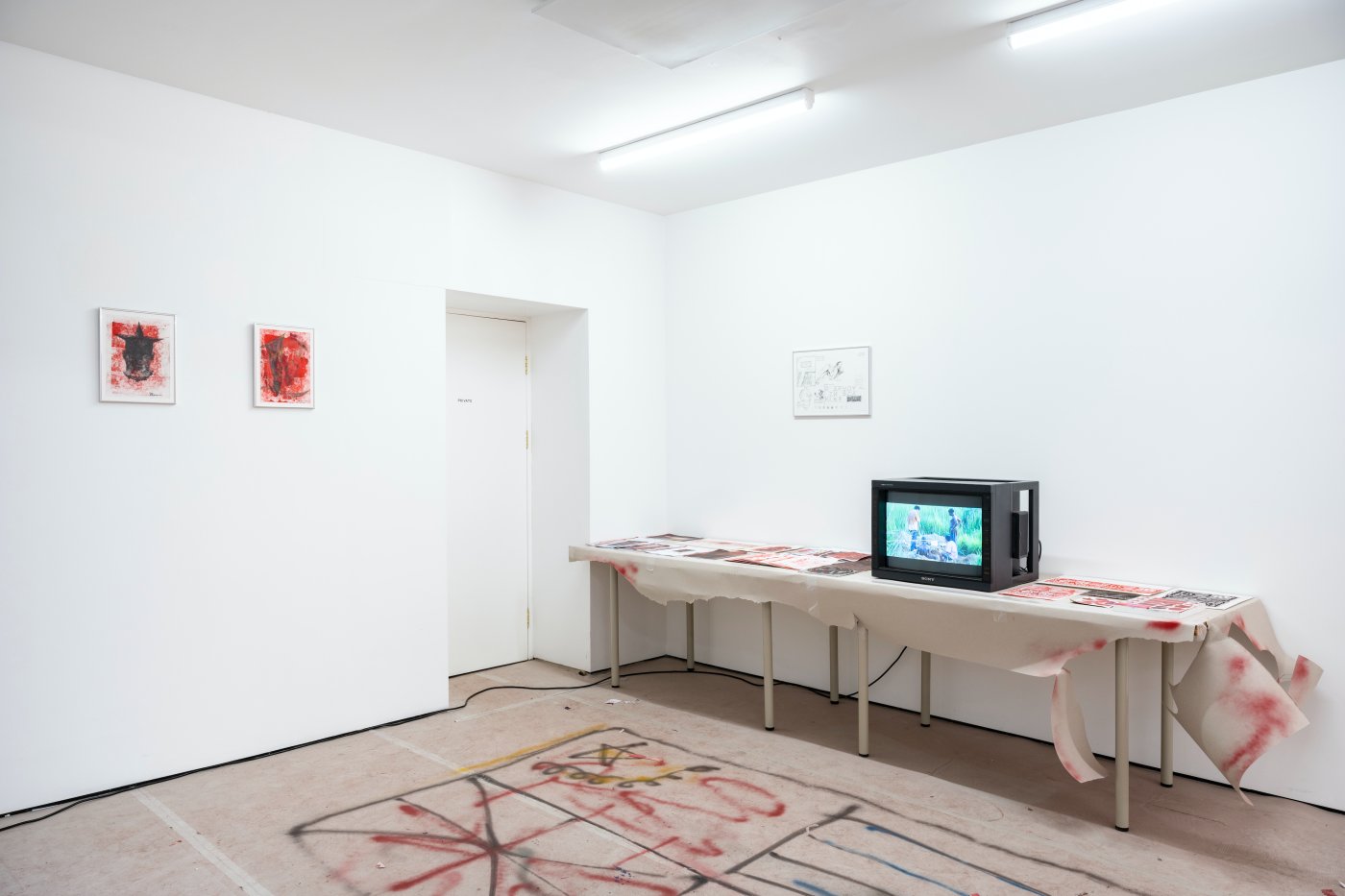 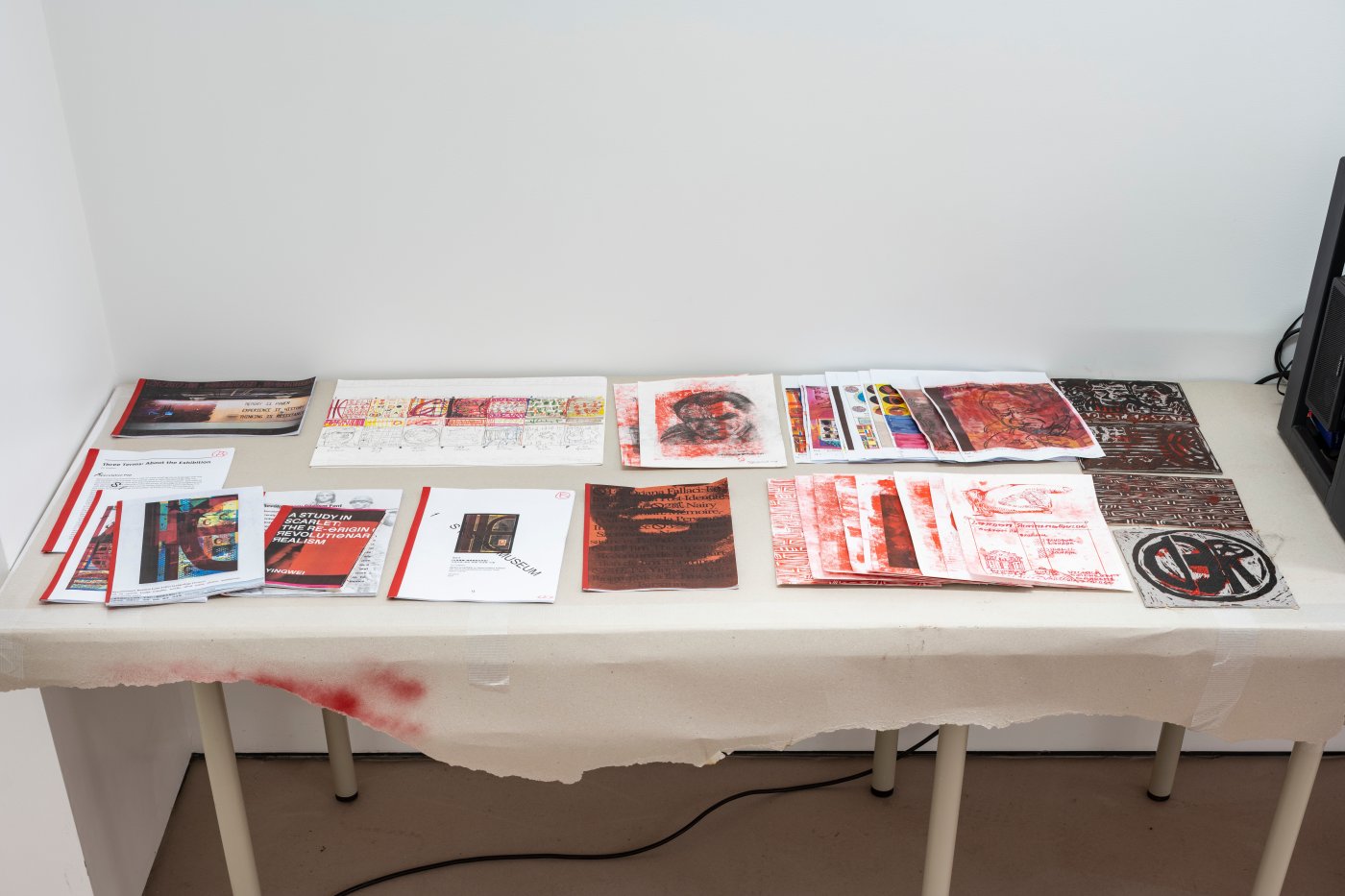 ARTIST FOREWORD
From Xi-Bai-Po, through the pandemic, to London. The residency programme entitled “A Study in Scarlet: The Re-origin of Revolutionary Realism”, could be regarded as a personal socio-political journey of visual language. With two core concepts –”speculative Pop” and “Pan-Chinese doctrine”, this residency is a re-thinking and re-interpretation of contemporary China’s national agenda, historical narrative, artistic ideological movements, as well as other issues. The residency placed
the aesthetic ethos of “socialist realism” with a specific identity in the context of London, and encountered and exchanged with viewers from different social backgrounds. Against a backdrop of today’s segregation and nationalism, such a practice has a symbolic meaning. To some extent, this phenomenon echoes the developmental pattern of China as an empire today and attempts to engage in a self-retrospection of this power. This is not a nationalistic reflection, but a practice of placing China as a vital part of the global proposition in both internal and external overlapping fields.

In the tone of scarlet, the existing visual language was re-interpreted during this residency. “Regarding red as a symbol of contemporary China, striving to expand the diversity of red and the possibilities that this colour can refer to” is the underlying logos of the new visual system, so is the use of a unique “Revolutionary Realism Font” (also known as the Empire Fonts) which integrates Chinese, English and Russian calligraphy, and is used across all the works born during the residency. The exhibition
will feature manuscripts and publications created in London, as well as seven brand-new large-scale works. Symbolizing the prophecies of the “Seven Days of Creation”, the seven thematic paintings foretell an integrated world that has been gradually forming, reflecting the past, the present and the future, and the scene is just as described in the programme preface:

“Tomorrow, you are about to enter a red era. In the wake of the pandemic, all regions have strengthened their control over people. Namely, after the plague, the red pattern has become popular on a global scale. Today’s red is smuggling opium to the Western world on the Silk Road. It is predictable that for a long period afterwards, certain areas will compare this phenomenon to the triumph of heresy, and eventually this voice will gradually fade away and be covered by red. The future will be a “century of intercourse”. It represents a highly integrated social form of ultimate power. In the century of intercourse, politics and economy, culture and entertainment no longer have essential differences. They are all cycles and secondary of power, which are going to be recycled into ultimate power finally. The strategy of “de-globalization” and “intro-globalization” promoted by the intercourse model eliminates the consensus basis and exchange principle in the traditional globalization era, thus obtaining absolute efficiency and dominance. When the old world was about to collapse, the social model promoted by red internationalism became the best choice. At the cost of freedom, the stability and prosperity brought about by its structure were eventually embraced by its people. So, are you ready for a red era?”
– Pu Yingwei, October 2021

Artist Pu Yingwei is the inaugural MAMOTH artist in residence. His residency at MAMOTH culminates in the solo exhibition ‘A Study in Scarlet: The re-origin of Revolutionary Realism’. Taking place in the space in which he has worked since early August, it comprises painting, drawing, video, printed matter, ephemera and a floor intervention.

Working at the intersection between historical colonialism and contemporary China, he appropriates and parodies the visual language, techniques and tropes of both historical and contemporary propaganda to unpack the present with what he refers to as a ‘Pan Chinese Doctrine’. This presentation addresses issues such as colonisation, written and spoken language exchange, globalisation, race and national identity, by doing so, he unpacks the intertextuality between domestic China and western centres of cultural power.

The residency in London has allowed Pu to further develop his existing research, whilst affording him a chance to incorporate site specificity into his practice. The colour red in its many variations has a key role in the exhibition. The colour red acknowledges London’s ties to macabre fictional horror characters such as Dracula and Frankenstein as well as Arthur Conan Doyle, whose story of the same name lends the exhibition its title. Crucially, red is also the foremost signifier of Chinese national identity. Pu seeks to expand on the existing reading of the colour red, in effect, speculating on the present to imagine a new future.

This speculation is realised in the central component of the exhibition for which Pu has produced seven new paintings (each with the prefix title ‘A Study in Scarlet…’. Each canvas addresses a single subject, including; craftsmanship, capitalism, colonisation, and space exploration, considered collectively they make up a compendium of cultural and national identity; which harness contemporary politics, as well as appropriating signifiers and signs of the past.

In the painting A Study in Scarlet: Sovereign Police (Celebration), 2021, its subject is contemporary China. Pu appropriates various existing symbols, most prominently a police insignia visible at its centre. The words ‘Peace and Love’ lie just below. The work comprises a composite of the American Flag, deconstructed, and rendered in Chinese red. American dollar bills speak of economic power, whilst rows of flags speak of international collaboration.

A Study in Scarlet: When the World Becomes a Plantation, 2021 focuses on the issue of Colonisation. Continuing his examination into China’s long standing relationship with Africa, Pu juxtaposes the subjects of globalisation and subjugation. The phrase ‘China Capital’ (a recurring phrase in Pu’s work) runs vertically down the left hand side of the painting, rendered in the Coca Cola typeface – a ubiquitous symbol of capital. Taken from educational resources, the images of various ethnic minorities, grouped together look out to the viewer, to the left an enlarged figure stands proudly, bearing the weight of the world, much like Atlas in Greek Mythology in Pu’s words. Pu builds up his paintings in layers, often covering areas, subsequently revealing them; these ragged, splintered forms are painted over with orange and yellow shades, resembling wildfire.

Looking at the evolution of fine art in pre contemporary China, A Study in Scarlet: Modeling History (Revolutionary Art Skills), 2021 considers the history of craftsmanship. Through the theme of revolutionary fine art, Pu incorporates references to Soviet Fine Art, evident in the sharply delineated shapes that mirror the period’s style. To the top left hand side is Pu’s own alphabet in what he calls the ‘Revolutionary Realism Font’ – a combination of Chinese, English and Russian. As if imagining an allied nation state, this unique lexicon allows Pu to present a cohesive and self determined hybrid visual identity. Contrasting with this, a face visible beneath the alphabet is a figure from the Tiananmen Square monument square, to its right a negative eclipse of the sun sets in increments.

In a set of smaller works on canvas, featuring many of the same elements as the larger paintings, Pu proposes a series of imagined flags, for new states, in the mould of classic speculative fiction. A proposition for an alternative arrangement of nations. Here stamped across the surface of many of these canvases is a woodblock stamp, spelling out the word ‘RED’ – the same stamp is pressed into each of the larger canvases, in effect branding the works, locating them as part of a singular body of work, tied to Pu’s time in London.

Across the expanse of the floor and one column, cardboard is a visible preparatory surface, a testing ground for various forms, symbols and motifs, some of which can be seen in the final paintings. The gesture of using spray paint on the surface of the gallery itself also serves to demarcate it as the artist’s territory, a place of both production and contemplation.

Also included in this presentation is the ‘Dam Theater’, a single channel video work, most recently included in the 13th Shanghai Biennial. The Dam Theater of the work’s title refers to the Karimenu II Dam, which was built by the artist’s uncle Li Guiping (a hydraulic engineer in Africa aided by China) in Kenya. The notion of ‘CHINAAFRICA’, a term which bridges country and continent, is of long term interest to Pu. The dam is testament to the two nation’s structural approaches to engineering. The film testifies to the personal experience of the artist’s uncle, whilst recording the seismic economic and cultural development of China in recent history.

Pu has also included a series of manuscripts, ephemera, wood blocks and publications in order to provide further context for his methodology and thought process during his time in London.