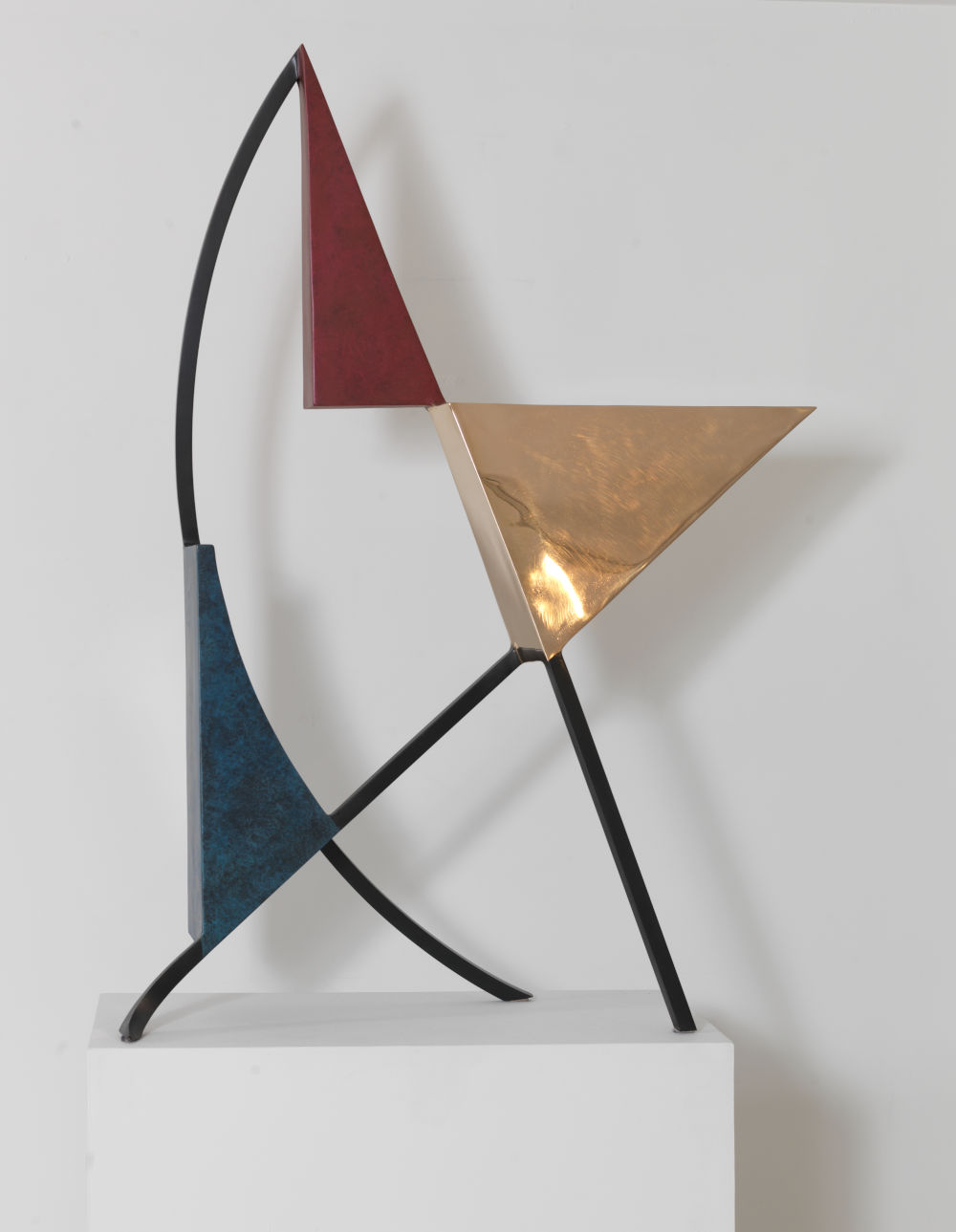 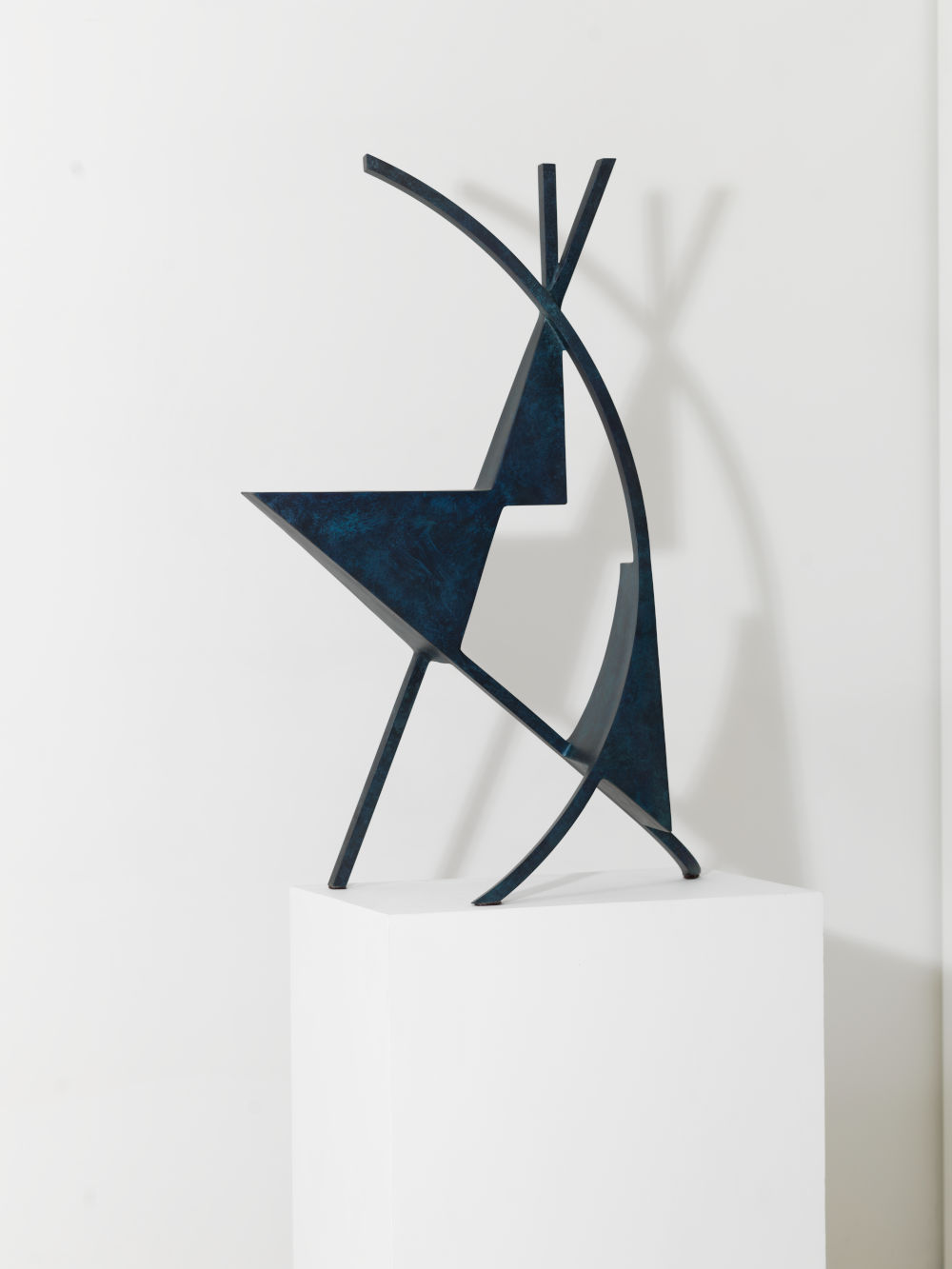 Arthur Carter
Three Triangles with an Arc and Two Chords I, 2019 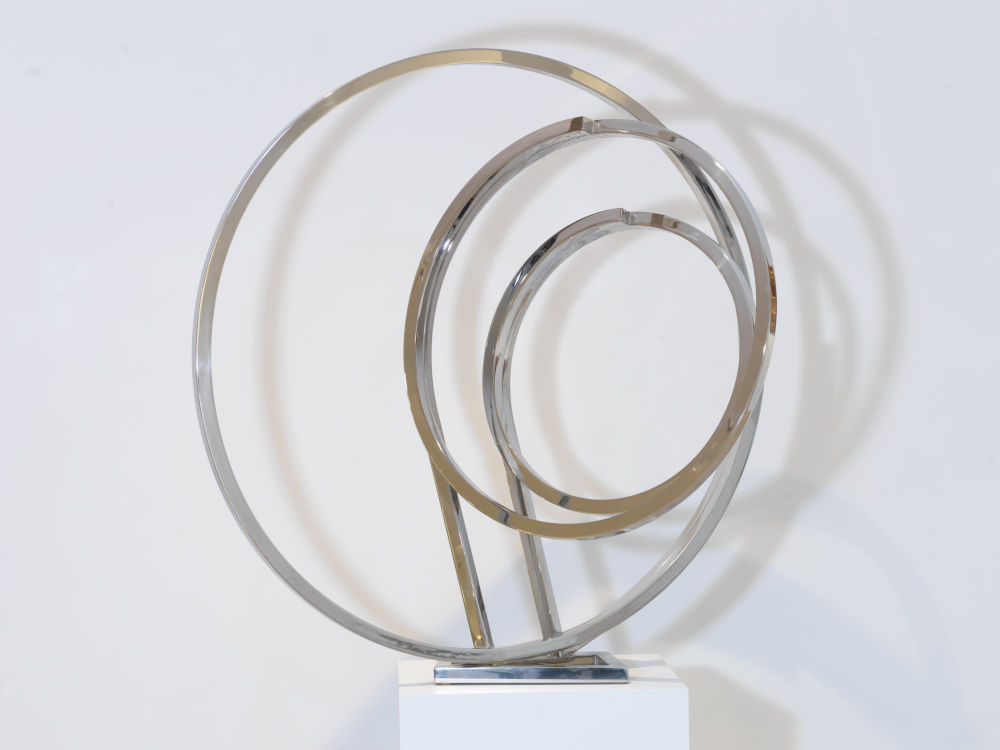 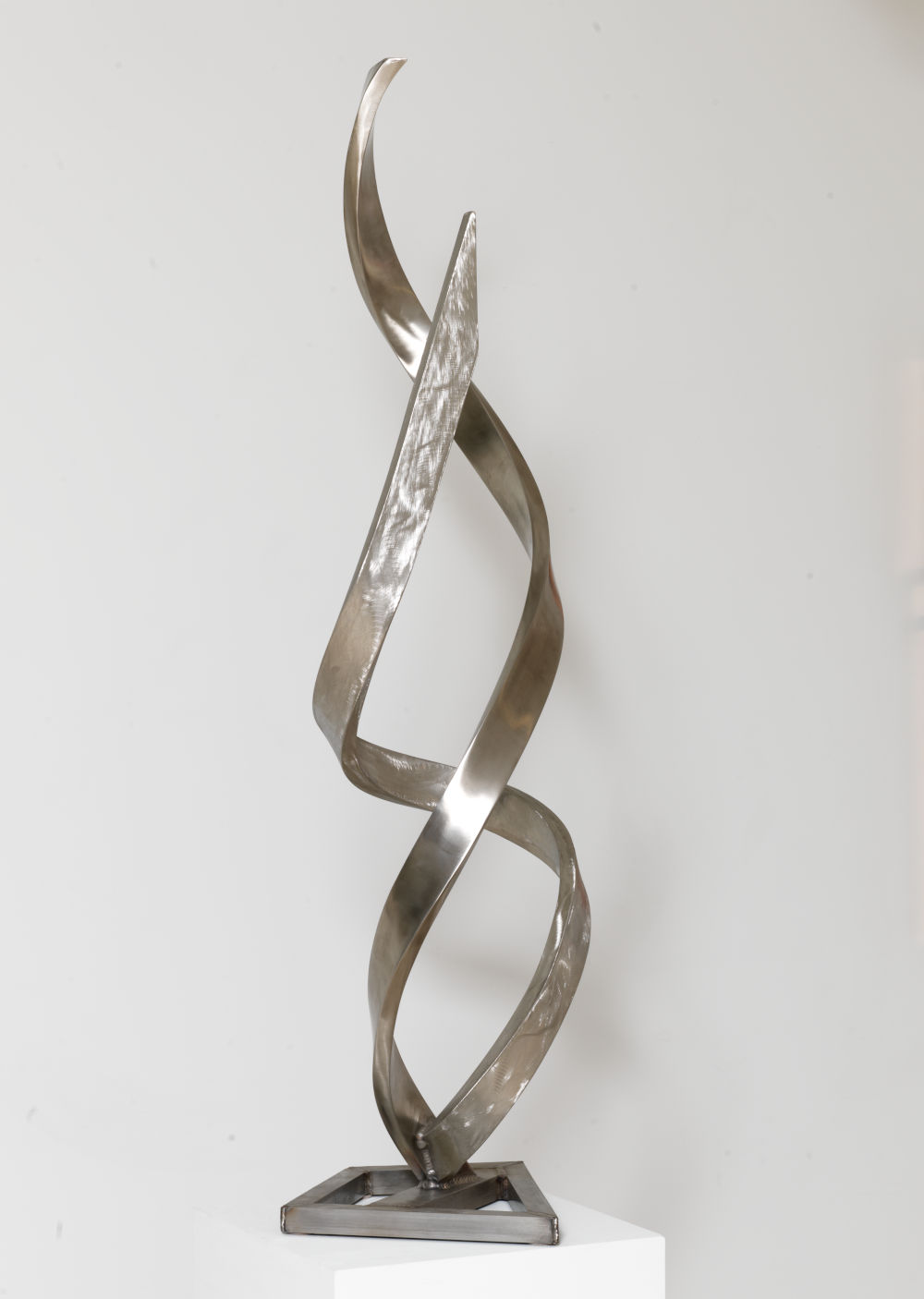 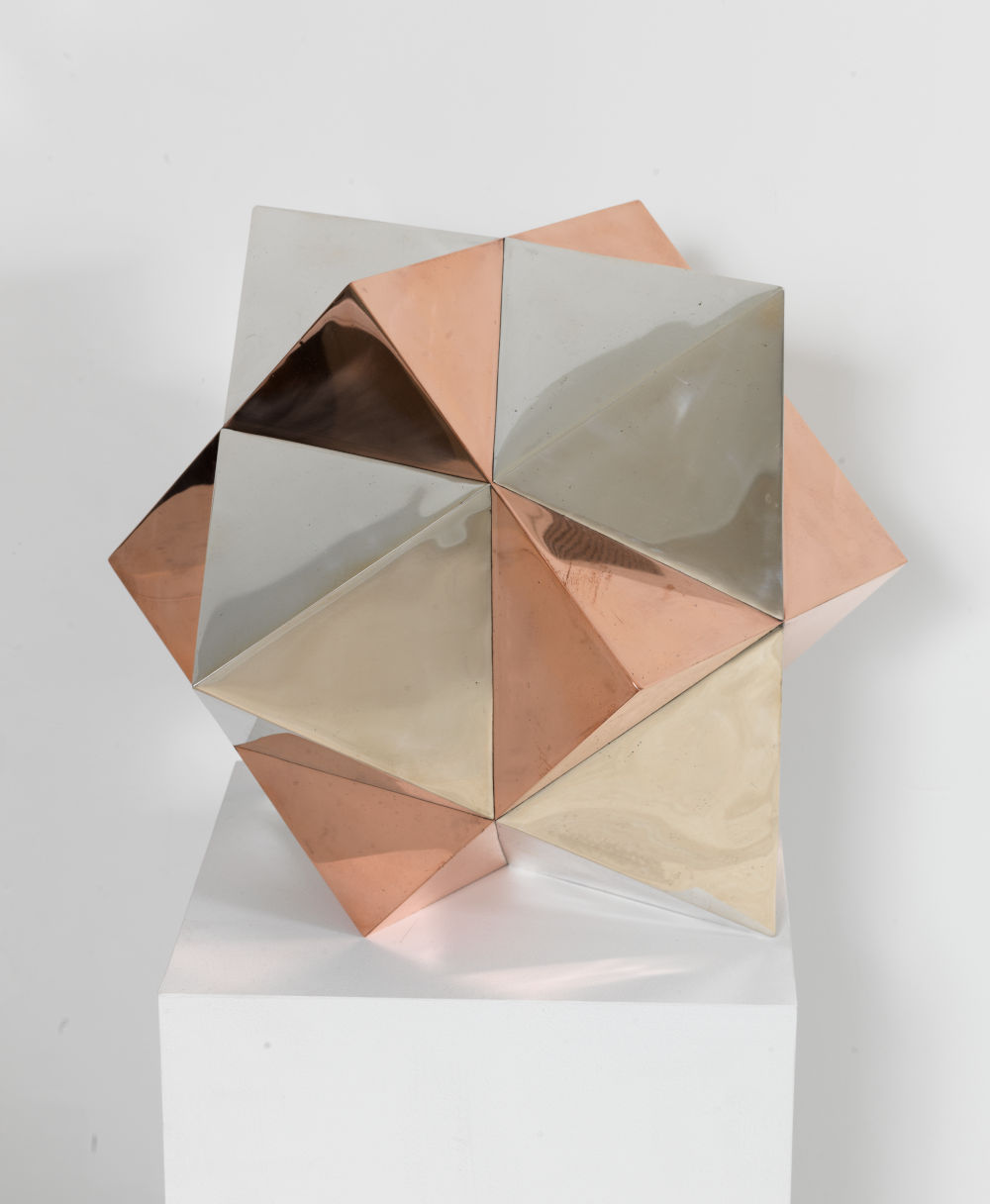 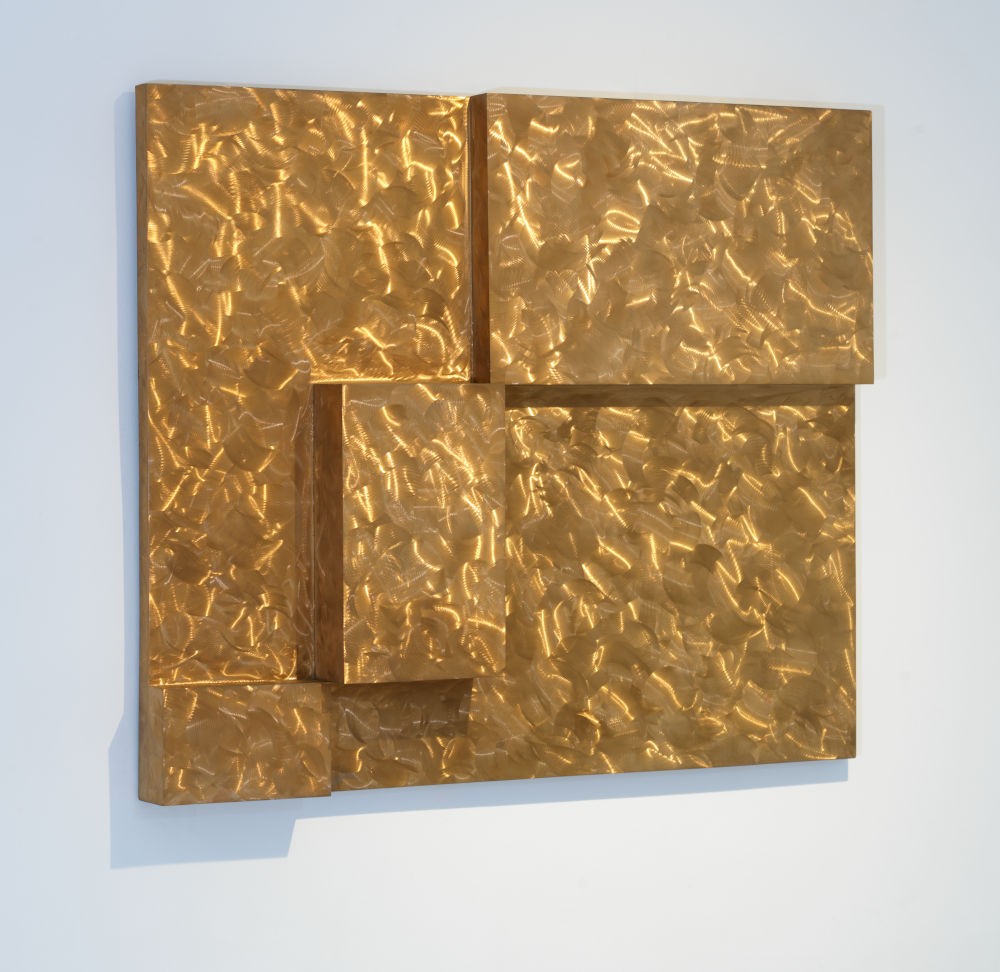 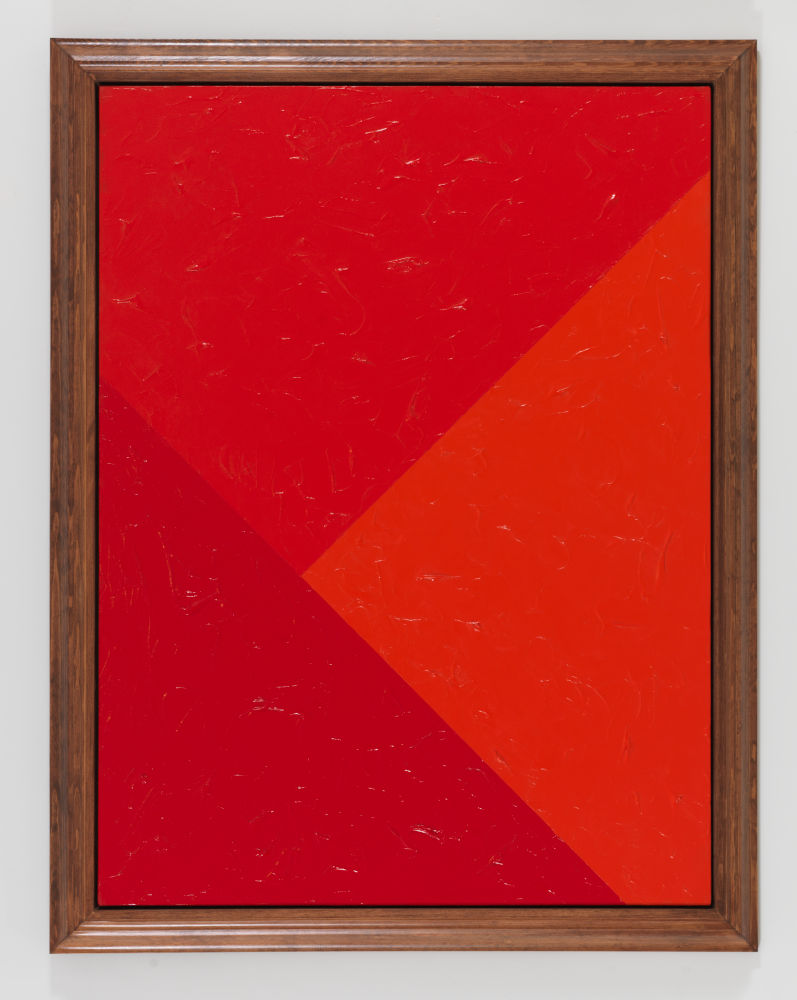 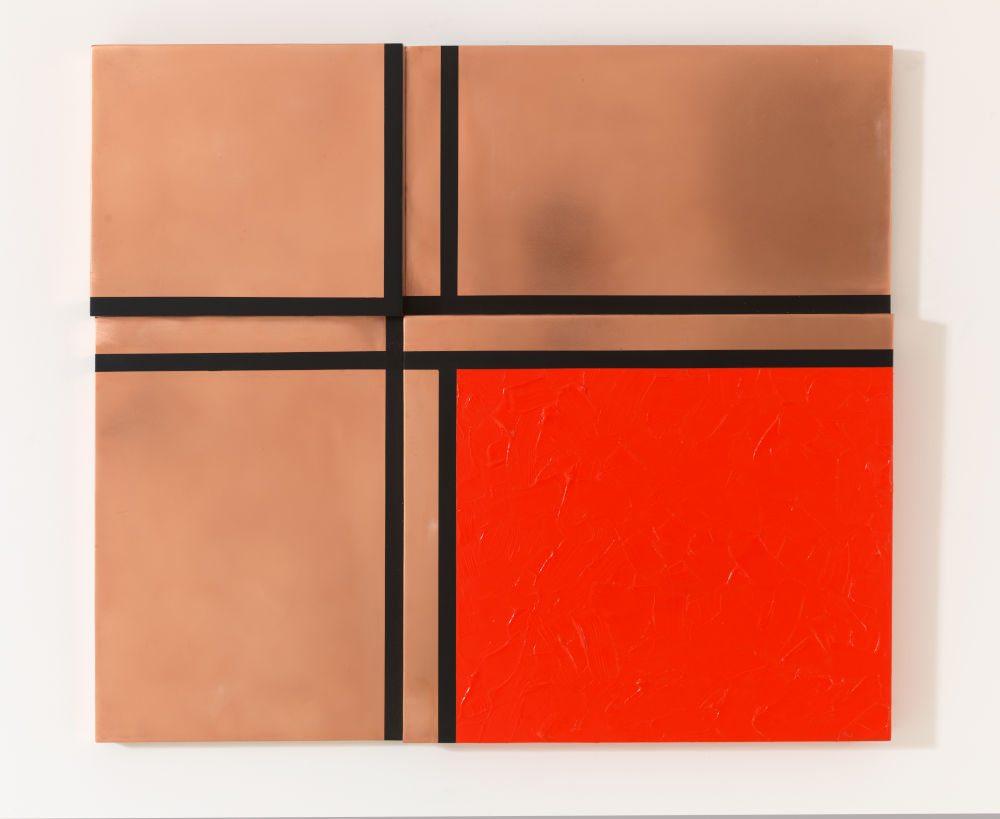 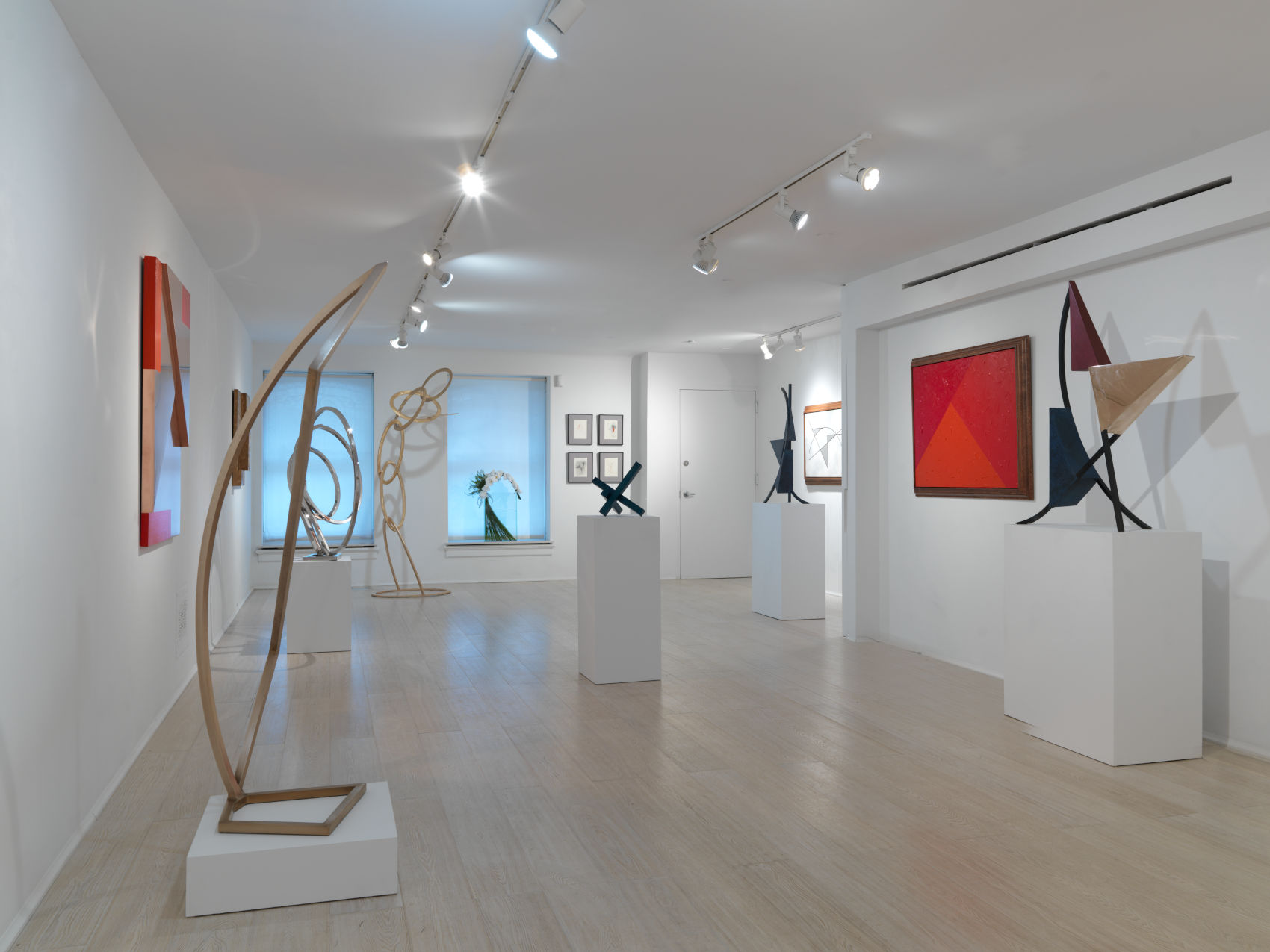 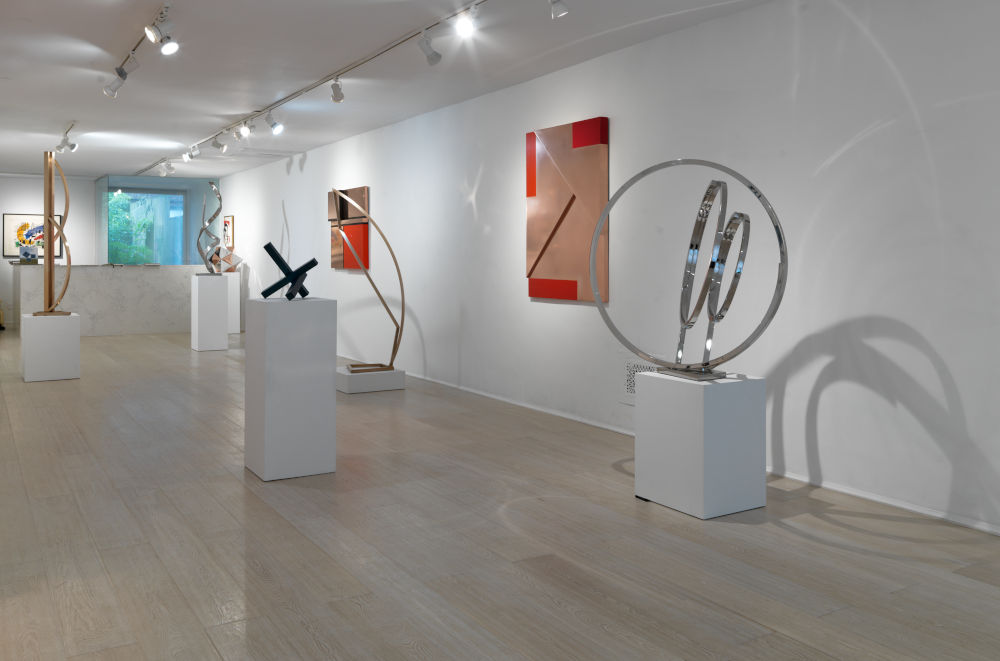 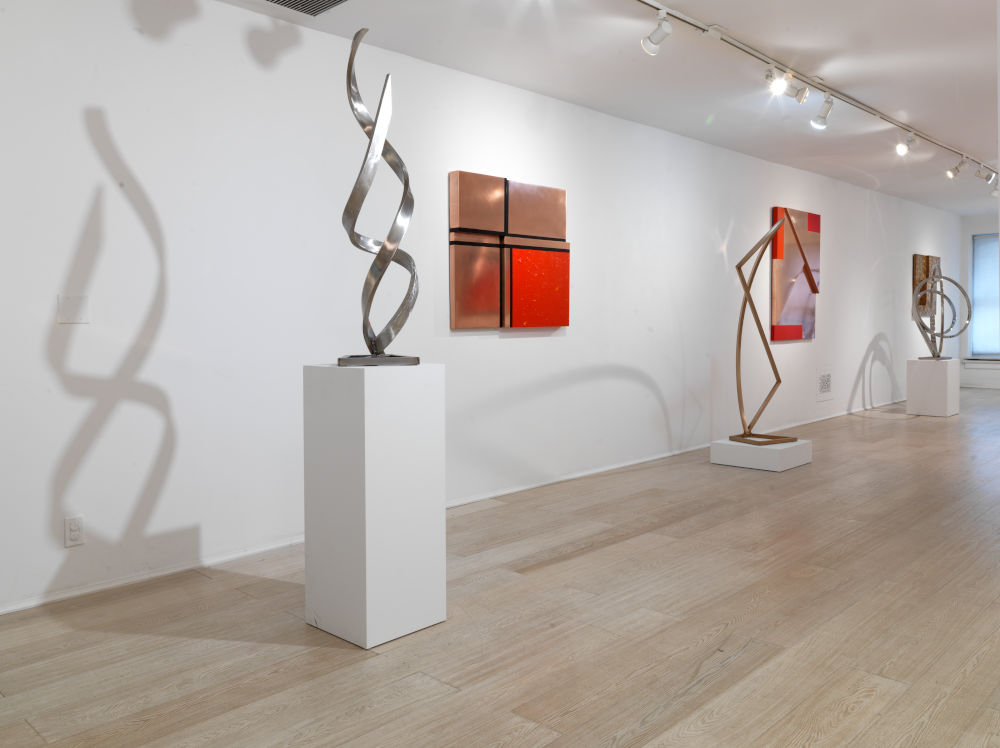 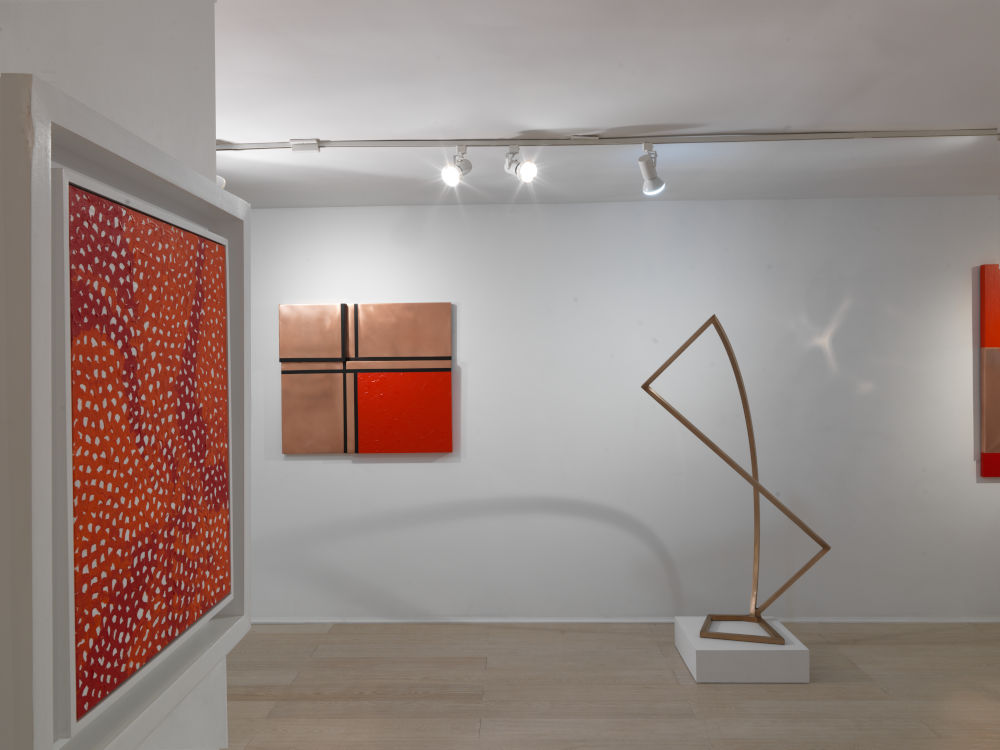 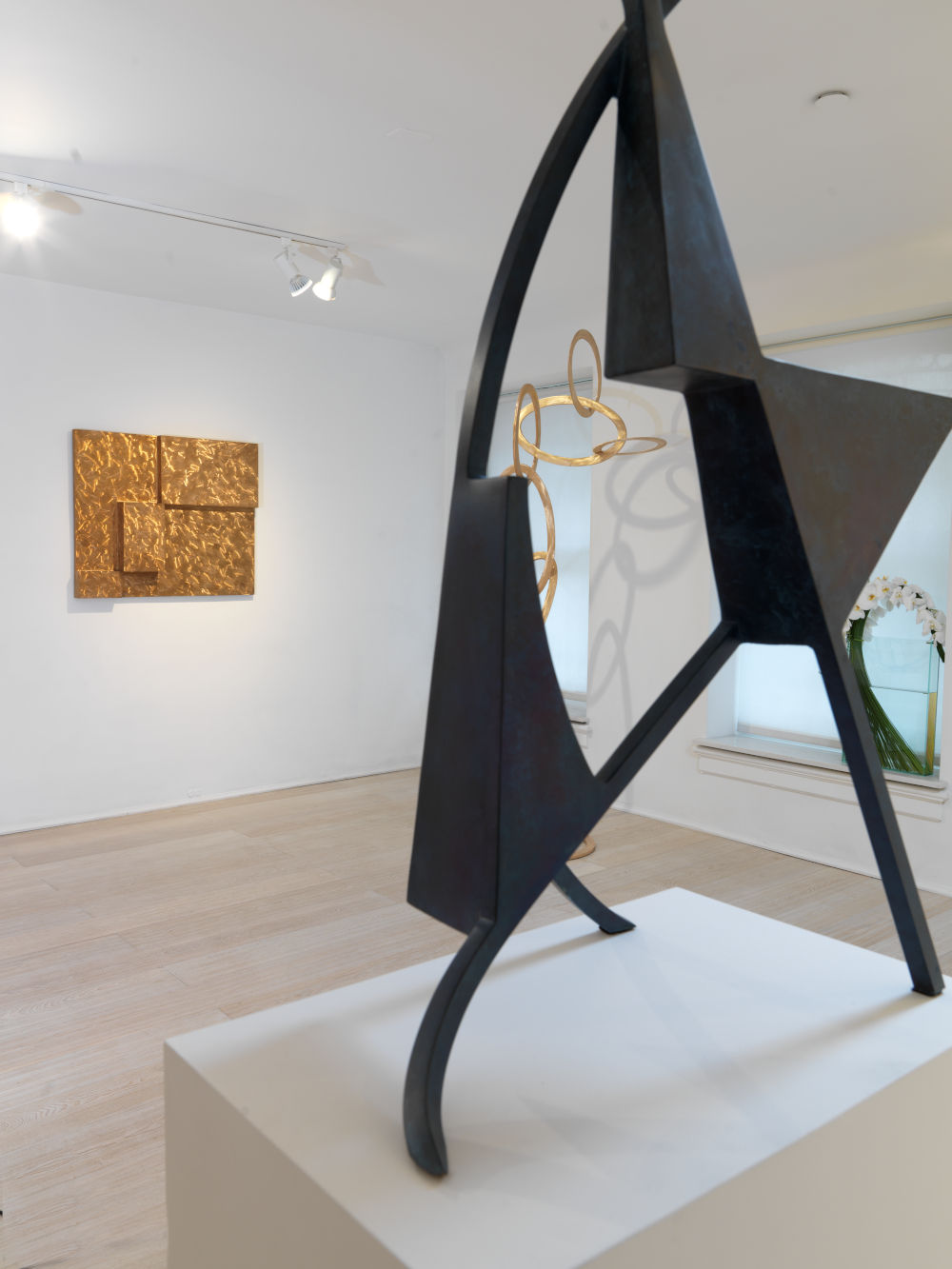 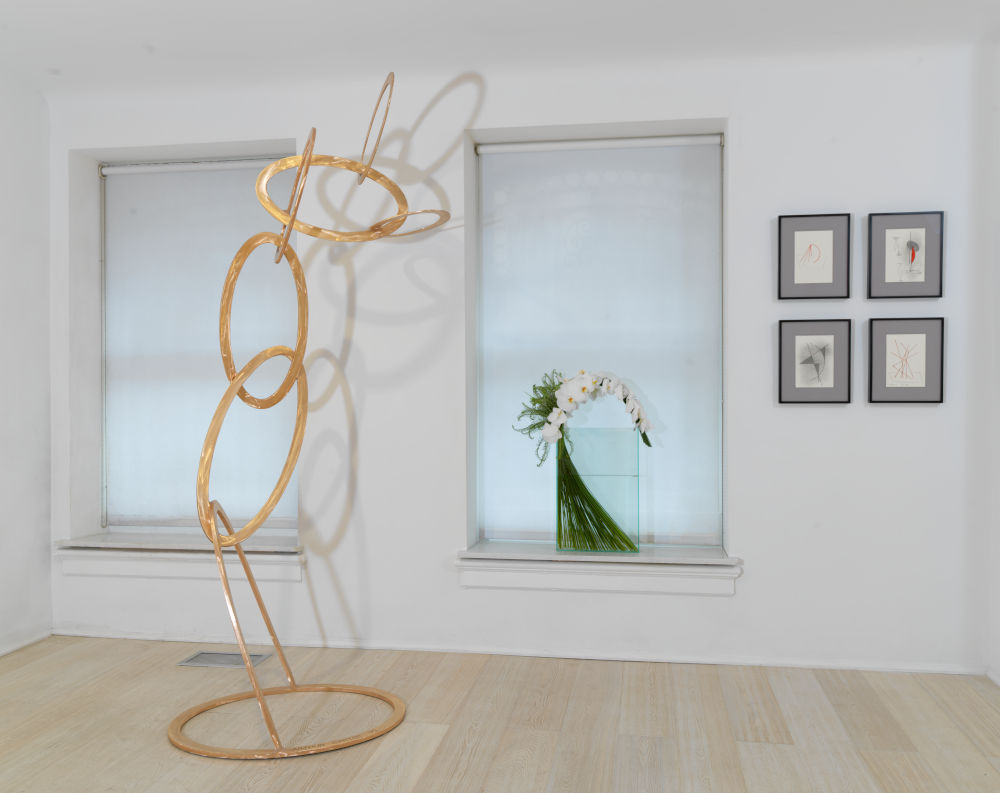 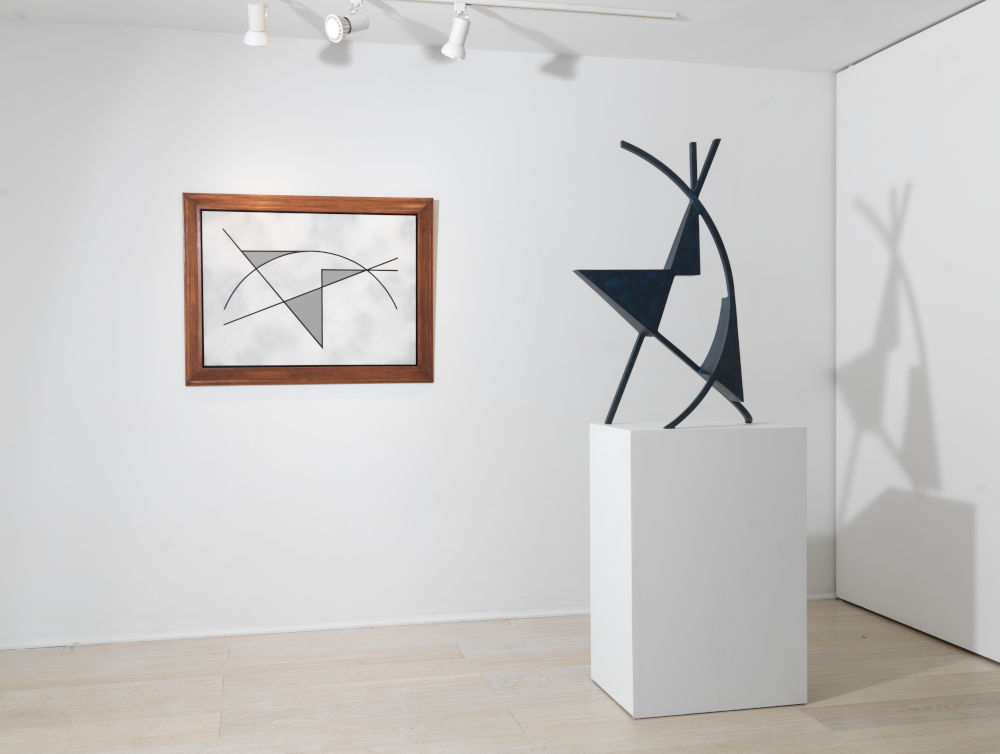 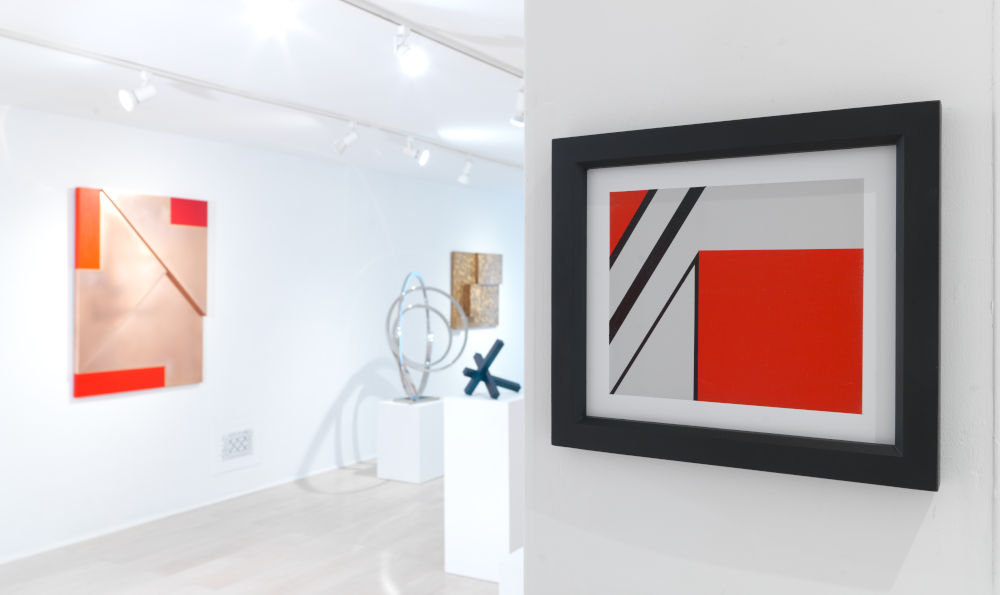 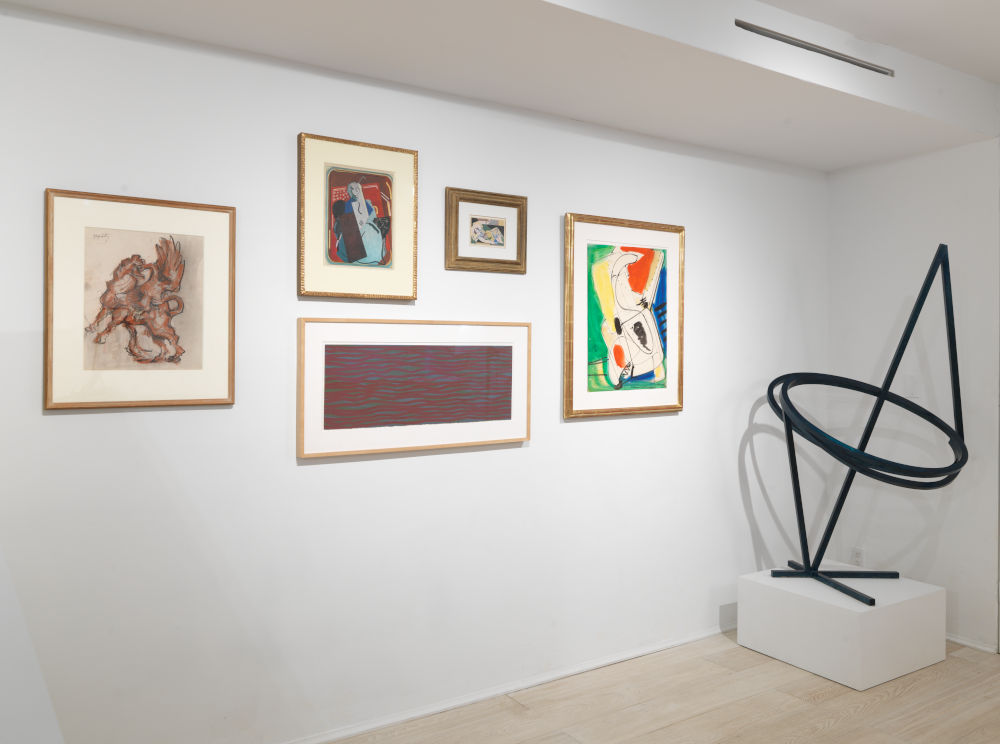 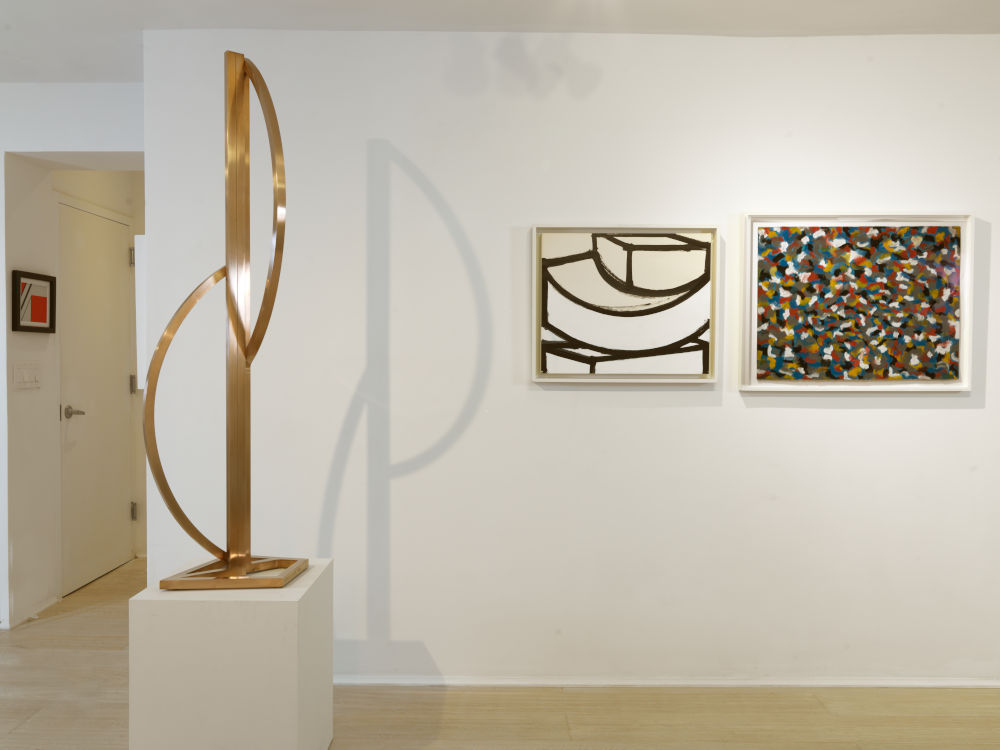 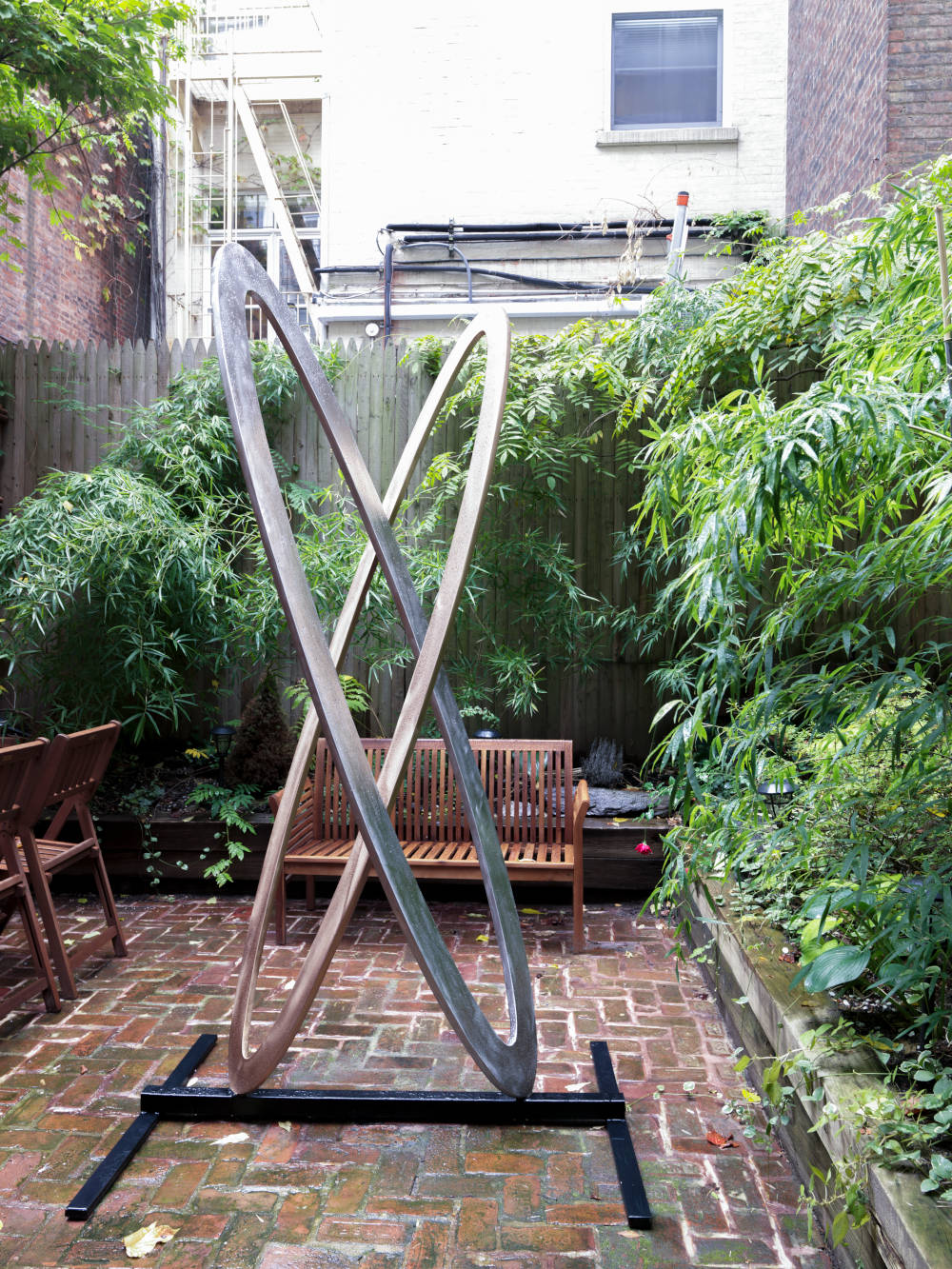 Arthur Carter’s exhibition features sculptures that have never been seen or exhibited. His new works integrate patinas into his bronze sculptures, adding an extra element to articulate a balance between vivacity and tranquility, distinction and integration. Carter explores the possibility of availing the language of geometry in different materials, sizes, and environments, creating dialogue and creative energy between art and mathematics. He challenges the structures of the physical world with his own modernist interventions, like new words in a language of space and time. Carter’s intuitions of line, form, and shape are visualized through his sculptural works after a process of iterations that explore relationships within space. By formally solving and eliminating the excessive, Carter studies geometry and form in two and three-dimensions and then integrates sculptures into their bases, creating harmony, movement, and dynamic rhythm which has continued throughout his oeuvre.

The dialogue between Carter’s two-dimensional and three-dimensional works speak to his systematic approach and empathetic representation of the beauty of geometry. Similarly, Carter’s inspiration from Modern and Contemporary Masters contextualizes his work and creates a conversation between the abstract, geometric new contemporary works which realize geometry in space with historical pieces. His reference to modernist pure abstraction and his reduction to form and color simplify visual compositions and create parallels between himself and artists such as Mondrian, Kandinsky, Picasso, Leger, Bolotowsky, Glarner, Gleizes, Metzinger, Hoffman, Calder, Lewitt, Lipchitz, Archipenko, amongst others, in addition to philosophers, mathematicians, and composers.

Carter explains, “My work focuses on simplifying and eliminating the excessive. The question is how does purity of design lend itself to making a beautiful and elegant piece.” Pursuing his inquiry into the use of geometry in his practice, Arthur Carter has engaged in an intellectual, sophisticated style, merging his mathematical precision and musical interest with his artistic investigation of the complex relationships between objects.

Arthur Carter was born on December 24, 1931, in New York City. Trained as a classical pianist, he continued his studies in French Literature at Brown University in 1953. After a career in investment banking, Carter founded The Litchfield County Times in 1981 and the New York Observer in 1987. Over time, Carter began to convert the grids and shapes associated with the printed page from its two dimensional layout to the third dimension, using steel and bronze to explore geometric relations in space. Arthur Carter’s career as a sculptor became the latest major statement of his polymath proclivities, with a number of sculptures on permanent public display and included in major private and public collections including along Park Avenue in Manhattan, at the United Nations, on both the New York University and George Washington University campus, at the New Milford Hospital, among others. Arthur Carter has been a featured solo artist at many galleries, including the Tennessee State Museum in Nashville, the Grey Art Gallery and 80WSE at New York University in New York City, The Southampton Art Center, Boca Raton Museum of Art, Galerie Piltzer in Paris, and the New Britain Museum of American Art in New Britain, Connecticut. He lives and works between New York and Connecticut.