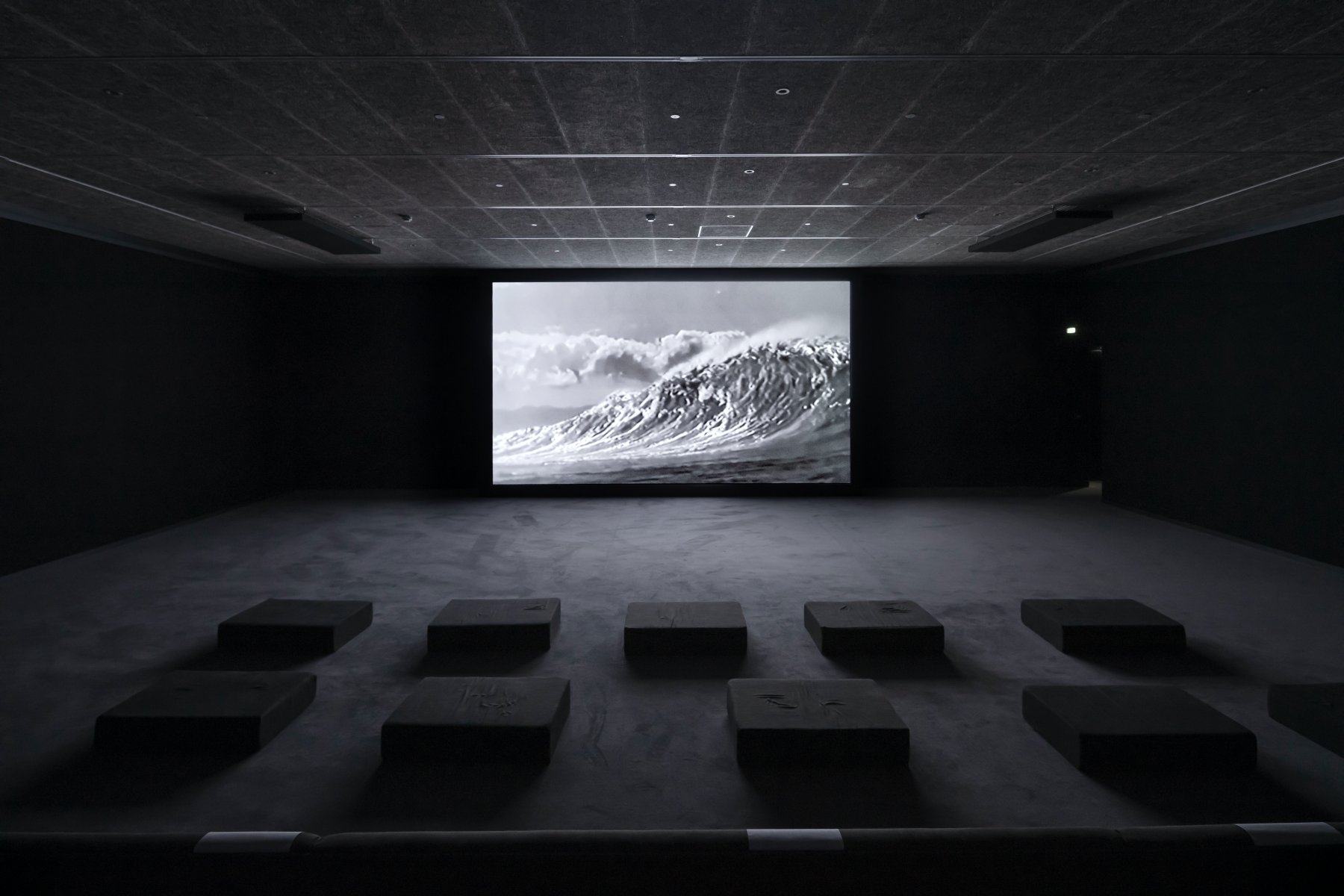 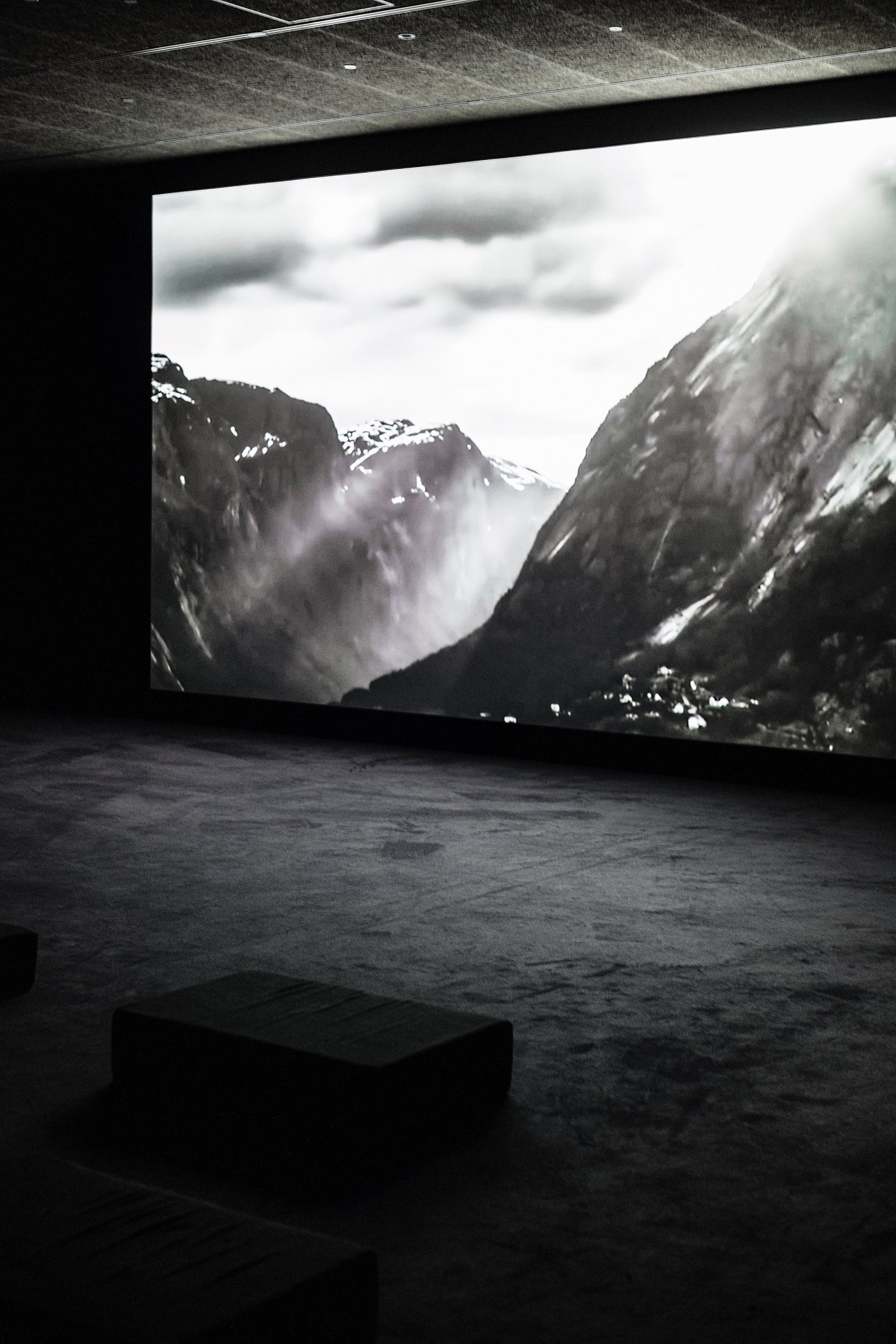 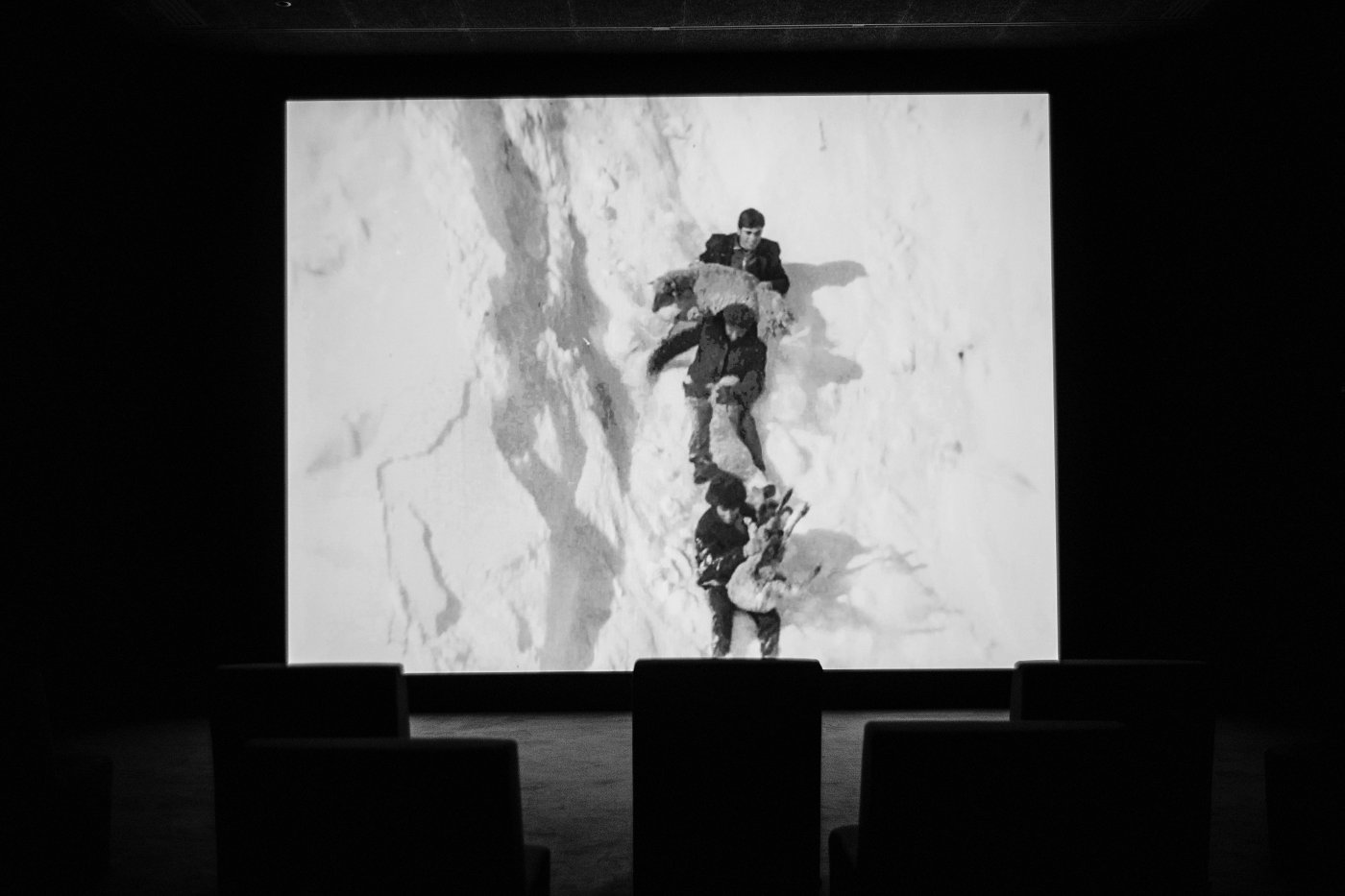 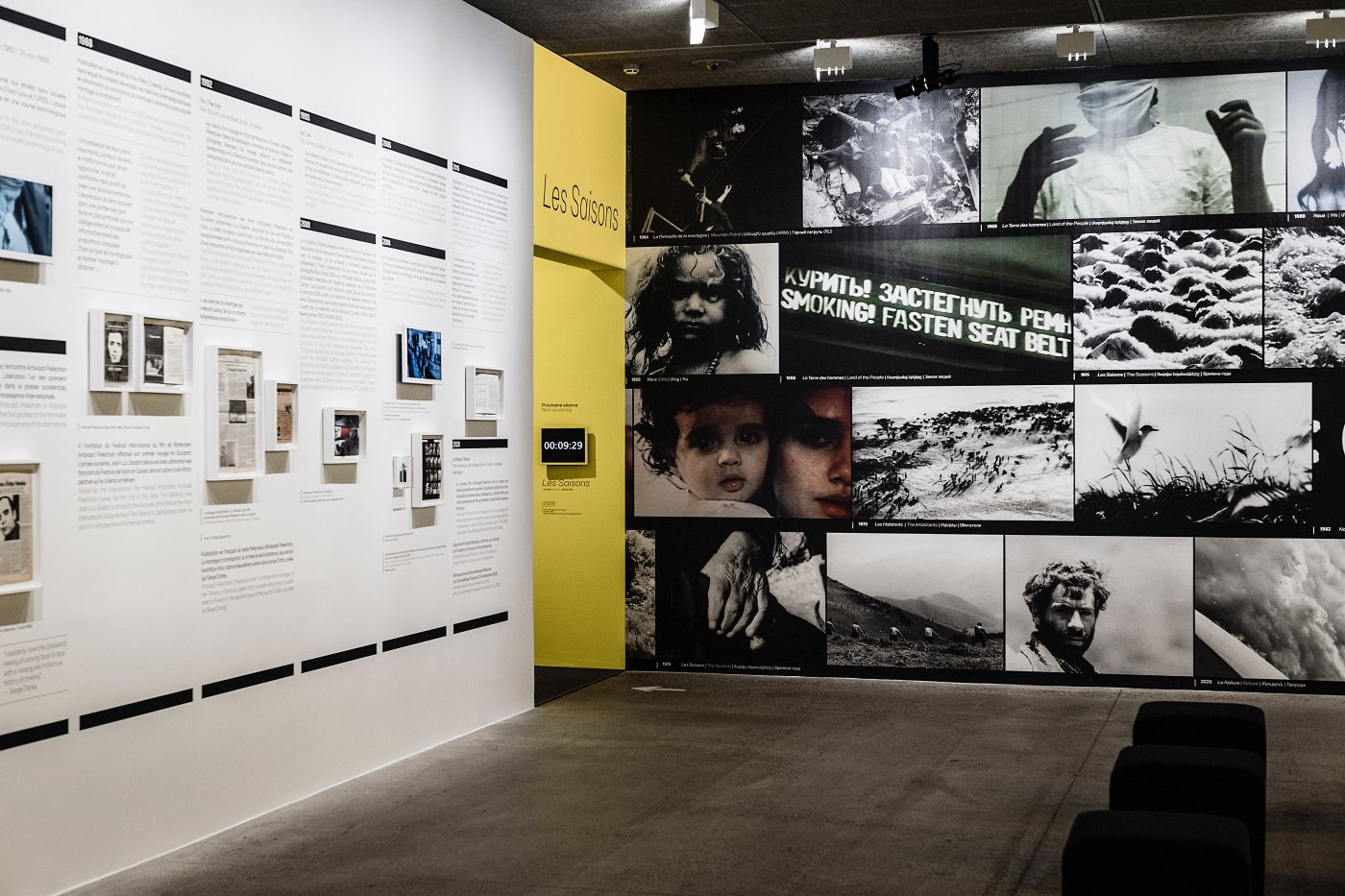 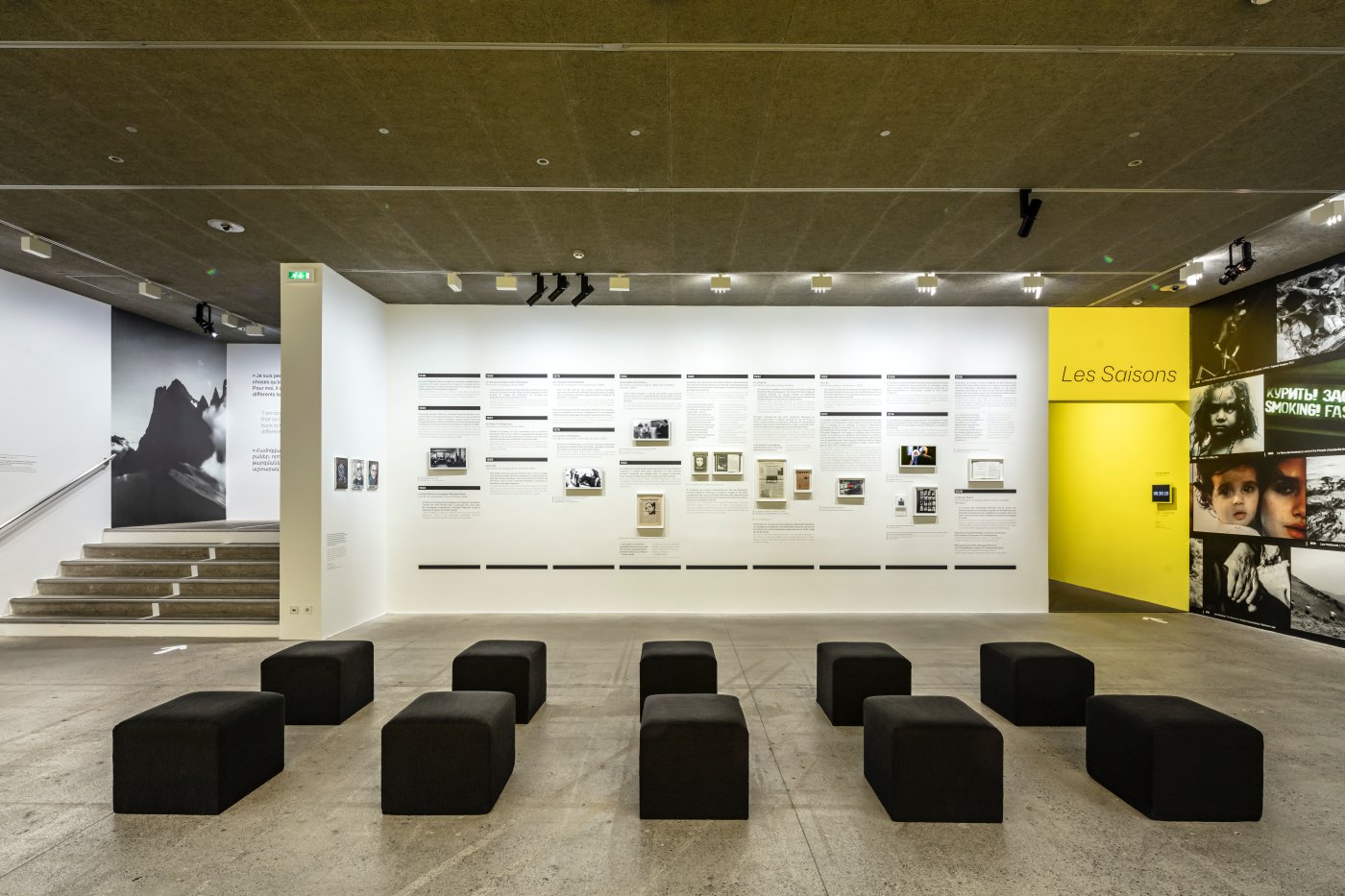 Commissioned in 2005 by Fondation Cartier and ZKM Filminstitut in Karlsruhe, it is the culmination of fifteen years of work of a director whose filmography is as infrequent as it is celebrated. The exhibition includes an unprecedented dialogue between La Nature (1h02 mn), his first film in twenty-seven years, and The Seasons (29 mn), one of the director’s historic achievements—an ode to peasant life dating from 1975. It shines a light on this major figure of the seventh art, who remains too little known to the wider public, and pays a fitting tribute to a lyrical body of work with, at times, prophetic accents.

I am convinced that cinema can convey certain things that no language in the world can translate. For me, it goes back to the Tower of Babel, to before the division into different languages.
Artavazd Pelechian

With this, the Fondation Cartier is continuing its longstanding collaboration with the filmmaker. Over nearly twenty years, it has developed a strong bond with Artavazd Pelechian, celebrating his work on different occasions. His films were notably shown in the exhibitions Un Art Populaire [A Popular Art] (2001), Ce Qui Arrive [Unknown Quantity] (2002) and Les Habitants [The Inhabitants], for the thirty-year anniversary of the Fondation Cartier’s establishment (2014), as well as in the exhibitions of the Fondation Cartier’s collection held in Buenos Aires (2017), Shanghai (2018) and forthcoming at the Triennale di Milano (April–September 2021).

Born in Armenia, Artavazd Pelechian created most of his work in Moscow between 1964 and 1993. Over the course of nearly thirty years, in the heart of the Soviet system, he made nine uniquely crafted short and medium-length films, almost exclusively in black and white, composed of documentary images. These images, taken from archives and actual footage shot by the filmmaker, were reworked (slowed, reframed, inverted) and edited together to produce veritable visual poems that escape the classical distinction between fiction and documentary. Drawing on universal themes such as birth, exile, and the lives of animals, each of ’s films attests to his belief in a language unique to cinema. His style, devoid of any narration, subtly places image and sound on equal footing. As he explained to Jean-Luc Godard in 1992:

A cinema of emotion, without dialogue, actors, or storylines, his work transports audiences with its spellbinding lyricism, taking an incisive yet empathetic look at the human condition. Discovered with astonishment in the West in the early 1980s, first by film critic Serge Daney, then by Godard, subsequently found his place among the great figures of international cinema. Daney wrote on this discovery:

I suddenly have the (pleasant) feeling of coming face to face with a missing link in the true history of cinema.
Serge Daney, movie critic

While it was long thought that his filmography had concluded with the film Life in 1993, Pelechian has now returned with a new film, simply titled La Nature, through which he once again observes the delicate cohabitation of human communities with their environment. Gathered from the internet, most of the images that compose the film are fragile, amateur-shot traces from within nature and its tremors that regularly rock these communities. Volcanic eruptions, earthquakes, and tsunamis form the film’s visual fabric, and are set against images of grandiose natural landscapes. A visual elegy, the film resolutely acknowledges the superiority of nature, with its unrelenting force, capable of transcending all human ambition. With this, the filmmaker seems to remind us that humankind will not emerge victorious from the ecological havoc that it has created.

In dialogue with this film-event, the Fondation Cartier is offering the chance to rediscover one of the wonders of Artavazd Pelechian’s filmography: The Seasons from 1975. It depicts a community of Armenian peasants, revealing their humble relationship with the natural environment in which they live and work. As the seasons pass, these farmers and shepherds are seen caring for their fields and flocks, literally becoming one with the landscape. With this film, Pelechian’s musical approach to film editing reaches new heights of intensity. The symbiotic connection uniting these peasants and their environment provides a striking contrast to the end-of-days visions of La Nature.

Brought together, these two major works engage in dialogue that deeply resonates with the challenges of our time. Complemented with a gallery devoted to the filmmaker’s life and work, featuring images and archival documents, the exhibition showcases this important filmmaker, whose filmography holds a distinctive position in the history of cinema.

Artavazd Pelechian was born in 1938 in Leninakan, a city in Soviet Armenia, renamed Gyumri following the country’s independence in 1991. He was raised in Kirovakan (now Vanadzor), and first received technical training that led him to work in various industrial trades. But in 1963, while living in Moscow, he decided to enter the VGIK, the prestigious Soviet film school. During his studies, he directed his first three films, including The Beginning (1967), on the occasion of the fiftieth anniversary of the October Revolution. In the following years, between 1969 and 1993, he created a further six films. Today, Artavazd Pelechian lives in Yerevan, Armenia.