Sprovieri presents Picasso’s Guernica in the Style of Jackson Pollock (Essay II), the second collaboration of the gallery with Art & Language. 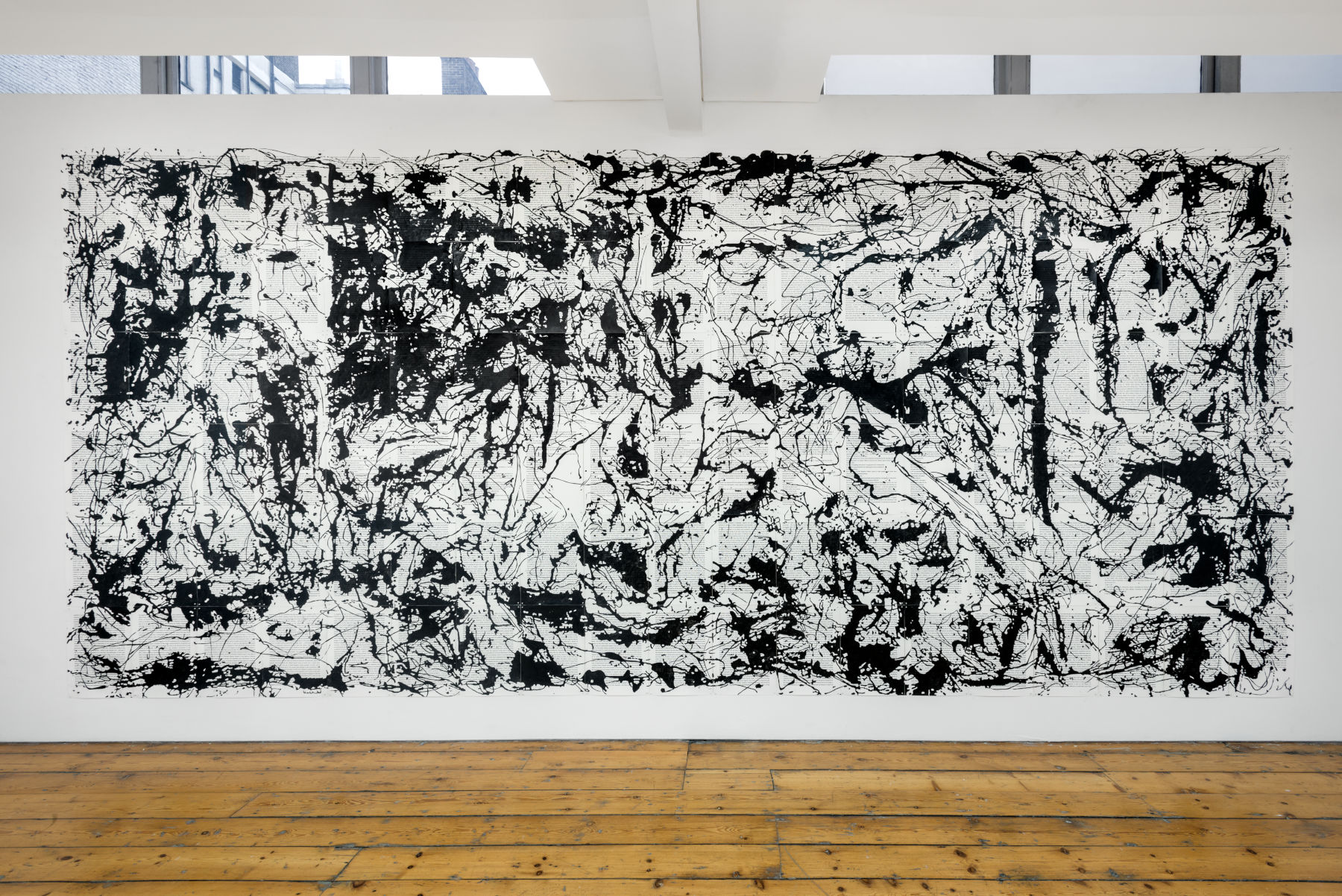 Picasso’s Guernica in the Style of Jackson Pollock (Essay II), 1980-2019, is a large rectangular work on paper, where the powerful and dramatic painting by Picasso Guernica is disguised as a Pollock-like painting. The work was not produced by means of the ‘literal’ use of Pollock’s well known technique. It is rather a drawing in which drips and spatters are represented or depicted. The drawing is made with Indian ink on 114 sheets of Teslin, printed with essays and texts written by the artists themselves between 1980 and 2016.

Portrait of V.I. Lenin is the title of the first of these essays – published in the magazine Artforum in 1980 – which explores the topics of realism, representation and authenticity. It is accompanied by nine other texts which were published by Art & Language in a variety of art-historical and philosophical journals.

The first artwork titled Picasso’s Guernica in the Style of Jackson Pollock is now part of the Collection of S.M.A.K., Gent. This work makes ‘literal’ use of Pollock’s technique and was among the first in Art and Language’s oeuvre considered by them as a painting ‘We wondered whether we could transpose the highly- charged historical dimension of Picasso’s ‘Guernica’ into a painting in the Pollock style, specifically his renowned black and white Düsseldorf style’. (Art & Language, 2013)

Art & Language challenges the value placed on identity, uniqueness, authenticity and exchange in the art world. Employing multiple media such as texts, installations and music, the group questions the essence and role of the art object and its authority, as well as the role of art institutions, artists and audiences.

For us, Conceptual Art was never a mature professional style but a black box (or a black box in a black box); what is sometimes called ‘a genuine historical moment’, changing forever whatever happened ‘next’. What happened in that moment inaugurated a process and a project. And it was given to this project to recognise that there continue to be baffling relations between text, pictures and painting, and that the expulsion of the two latter from the purview of the artist is a cheap closure which fails to recognise the constructedness of the world…Art & Language’s practice has been project-like and essay-like. And this entails that it must be a critical practice…a collaborative practice. Work, in the sense of non-wordy action and its consequences, is embedded and then re-embedded in conversation, until the edges of what is work and what isn’t work vanish and then re-appear in different places. (‘Making Meaningless’, Art & Language in Practice (cat) Fundació Antoni Tàpies, Barcelona, 1999).