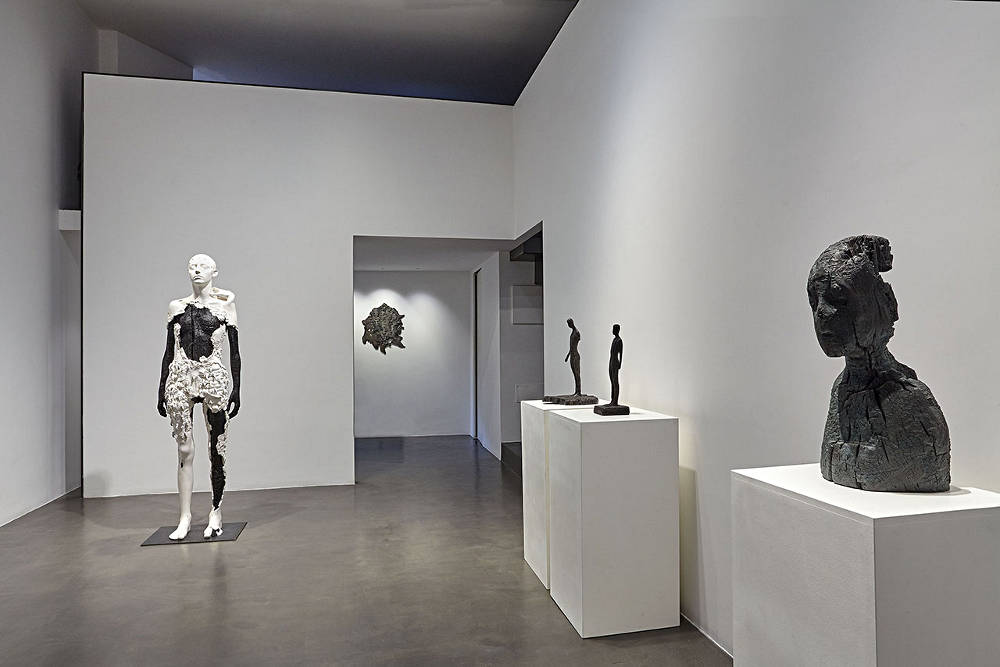 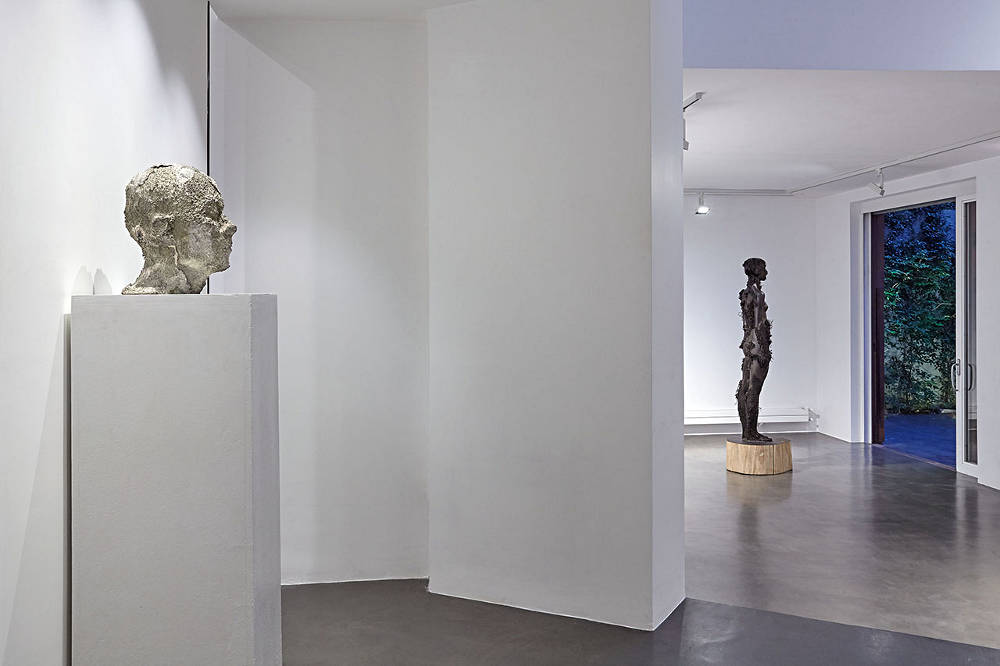 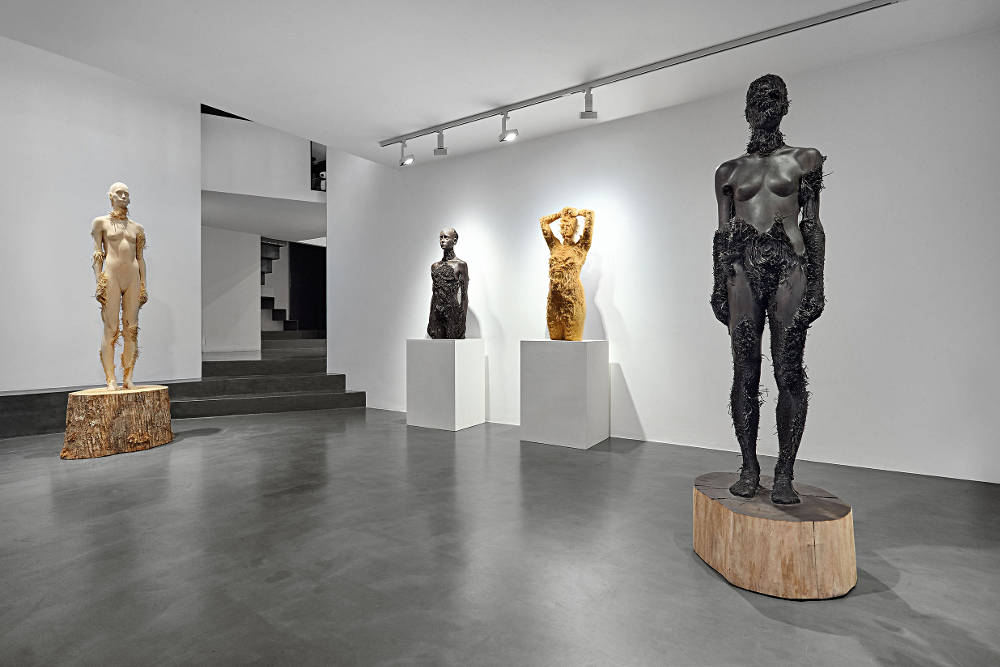 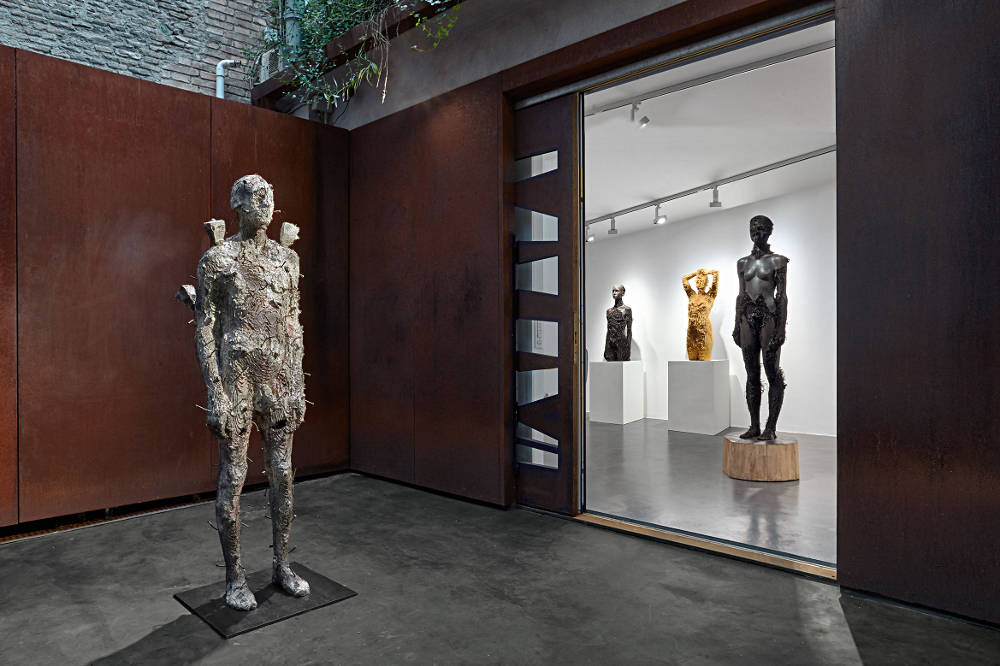 The exhibition features the typical sculptures made of bronze, charred wood and plaster, with the surfaces “wounds” through lacerations.

Aron Demetz starts from traditional processing techniques, including modelling, fusion and combustion, to give life to human figures “regenerated”, purified by fire and heat, witnesses and custodians out of time of a human awareness to keep alive.

Regeneration is the natural process through which an animal or vegetal organism reproduces partsof its body identical to itself following a traumatic or physiologic mutilation that occurs over its life cycle. Almost without our realising it, this phenomena goes on continually, as plants grow, a natural event or one determined by a man’s action causes a branch to break or a root to be cut, the plant survives and develops, substituting the damaged parts until finally it too ceases to live. This process can be defined as a form of perseverance of the biological matrix, the same one regulating a human being’s instinct to survive, and characterising Demetz’s sculptural language.
In fact his research into the expressive potential of wood has shown an undoubtable perseverance in wanting to give new life to this organic material which has lost its vital functions. Aron Demetz walks in forests in search of fallen trunks and uprooted trees, he never cuts down a tree which is still green, alive; he carefully evaluates the colour and the grain of the wood, its compactness and the “accidents” of time and finally he observes the local ecosystem to understand the aesthetic potential inherent in the unique and particular piece of wood he has found. Once removed from its natural environment, the trunks and roots suitable for sculpting are moved to the artist’s studio, where the artisanal working process that will regenerate them into sculptures to be viewed in the round begins, though he leaves visible traces of what they were in nature and what they will be. The animist idea of the continuity of life and the memory of past times are found in the knots, in the grain and in the colours, the breakages and the holes that the artist assumes as expressive stylemes.

Through a journey that involves the spectator physically and psychologically, the exhibition traces the entire research of Aron Demetz, developing a dialogue between sculptures belonging to different series: Advanced Minorities, Burning and Autarchy.

In addition to the real-sized human figures, some of which made specifically for the occasion, the exhibition is enriched by some small bozzetti, which allow us to intuit and perceive the creative process of the artist.

Courtesy of the artist and Galleria Anna Marra, Rome