Tornabuoni Art Paris presents an exhibition that focuses on the origins of the work of the Italian sculptor Arnaldo Pomodoro (b. 1926, Morciano di Romagna). Organized in close collaboration with the Fondazione Arnaldo Pomodoro, the show highlights the years 1955-1965, a pivotal period in the artist’s career, thanks to exclusive archival materials and new to the public artworks. 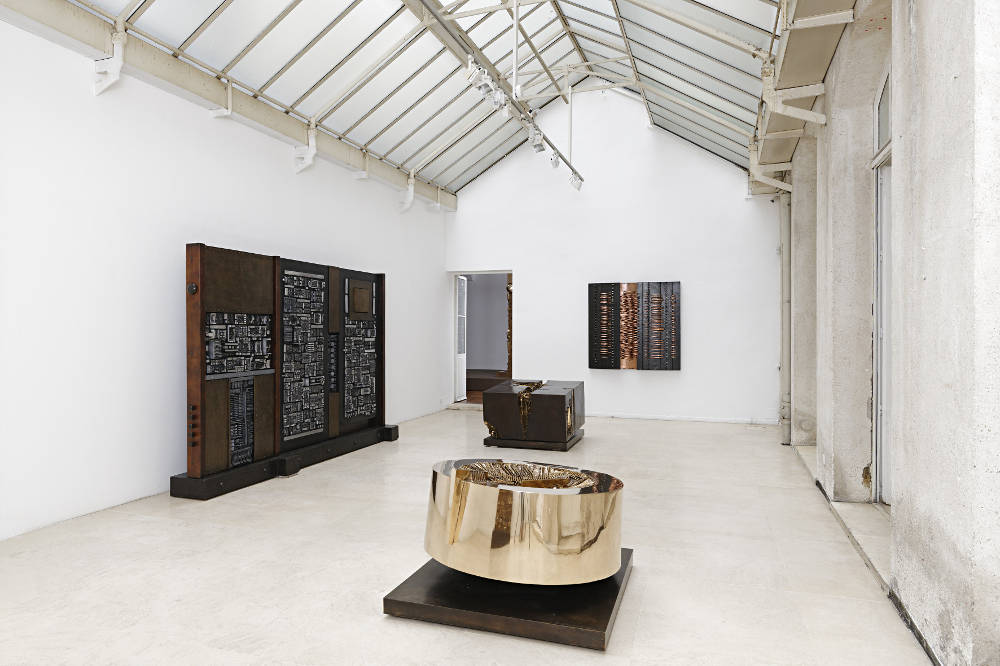 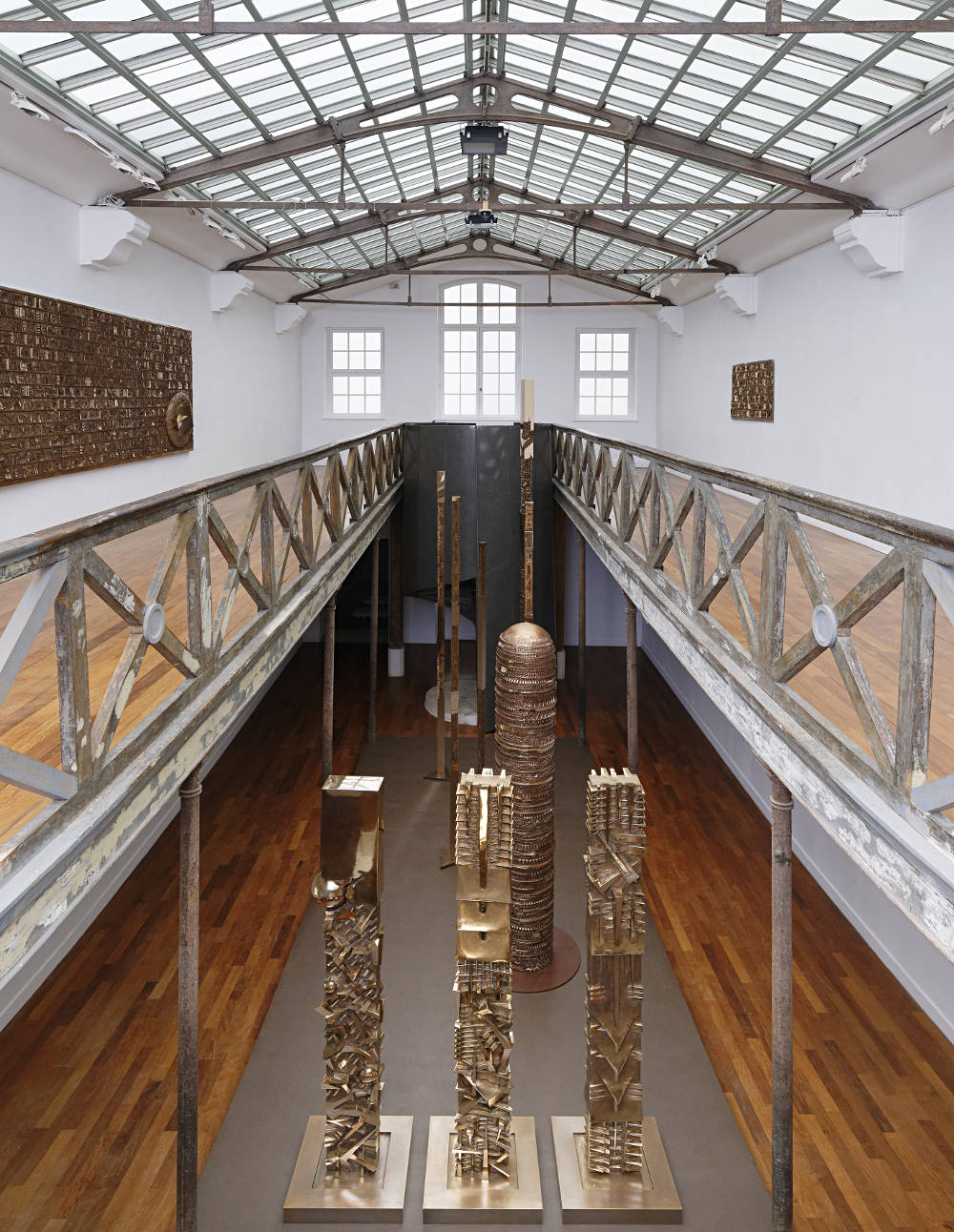 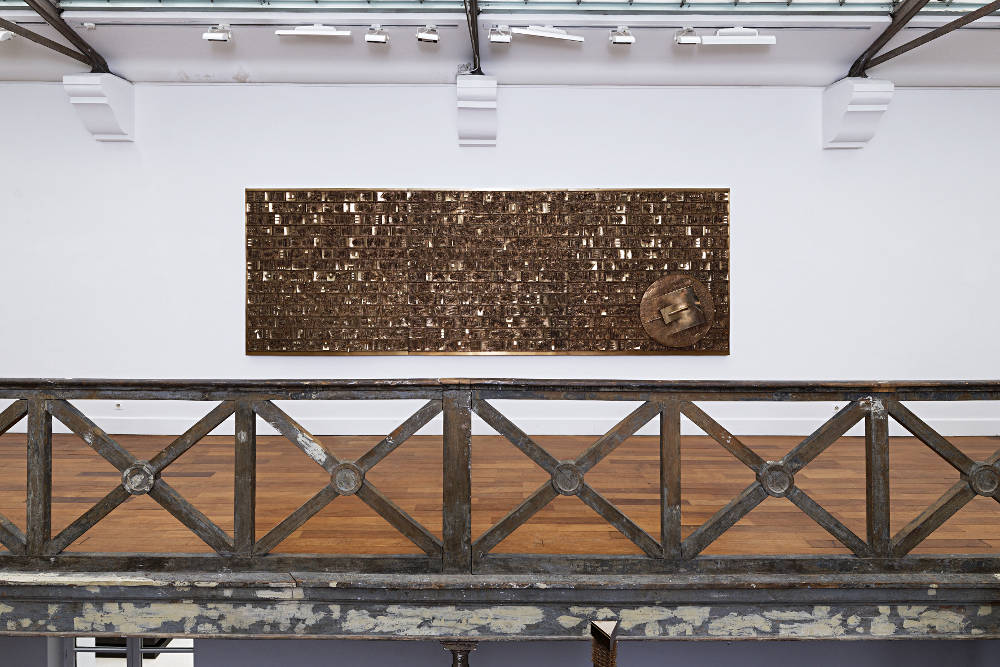 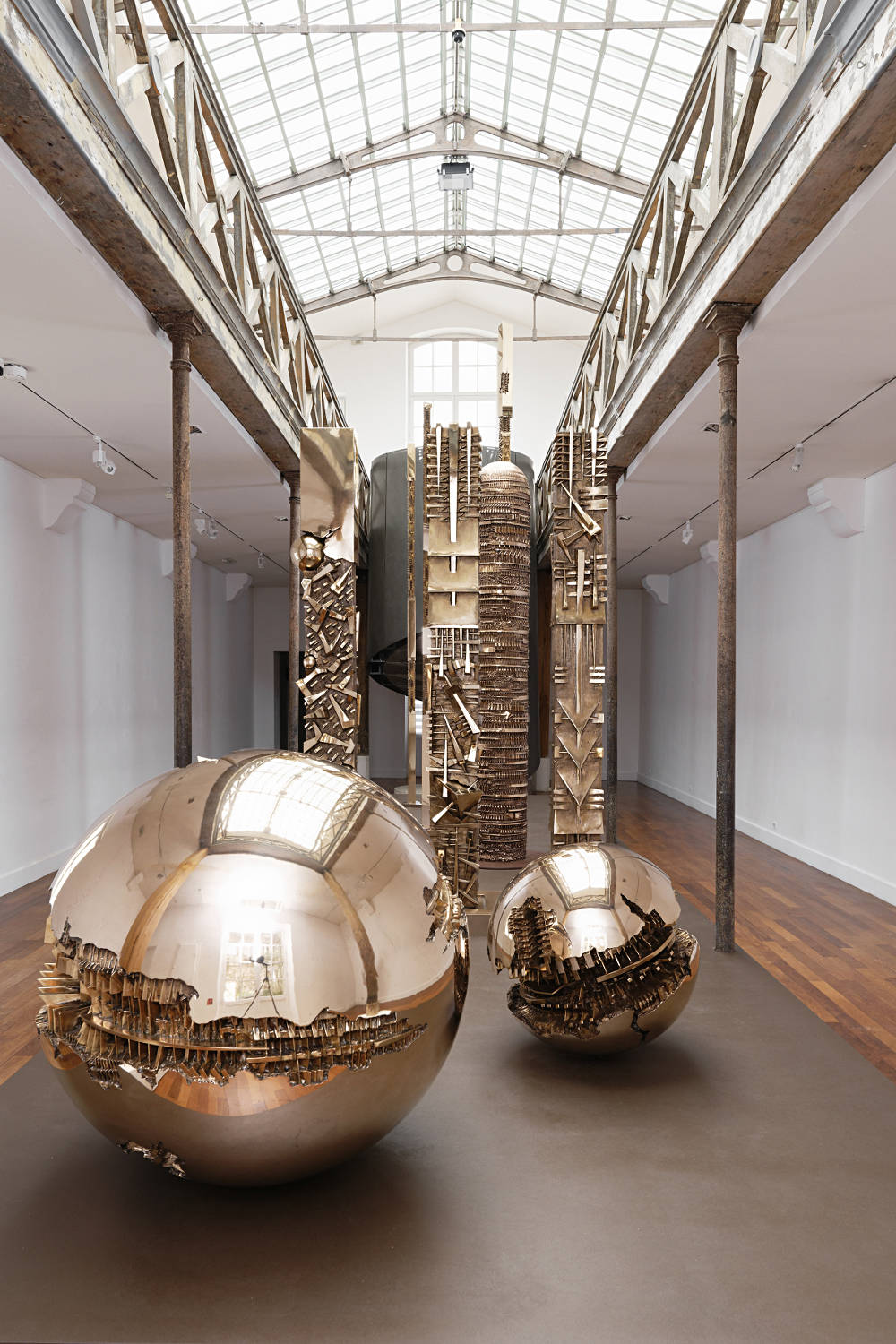 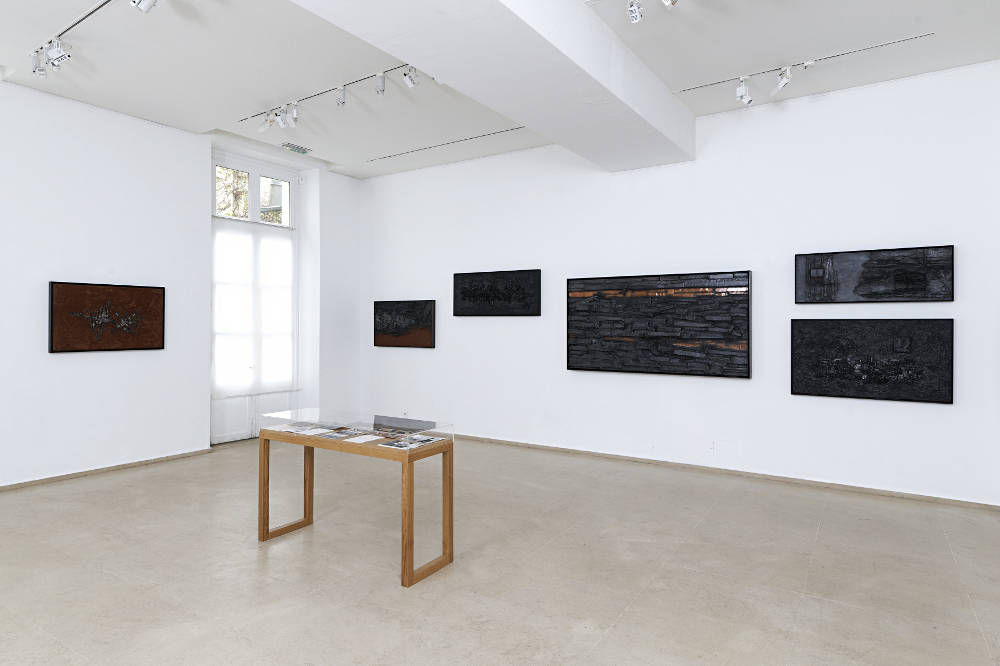 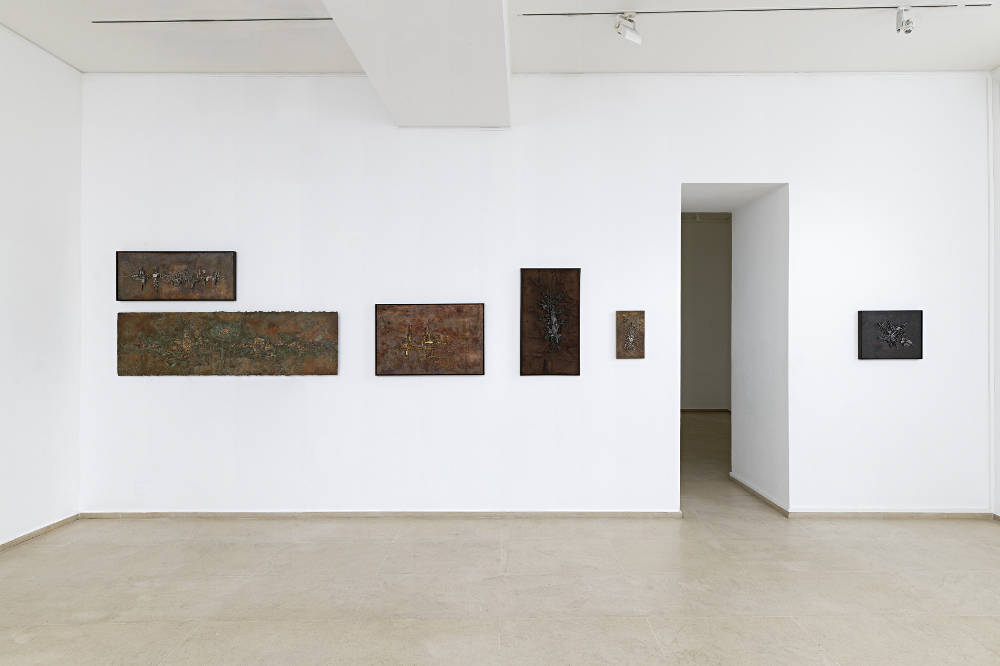 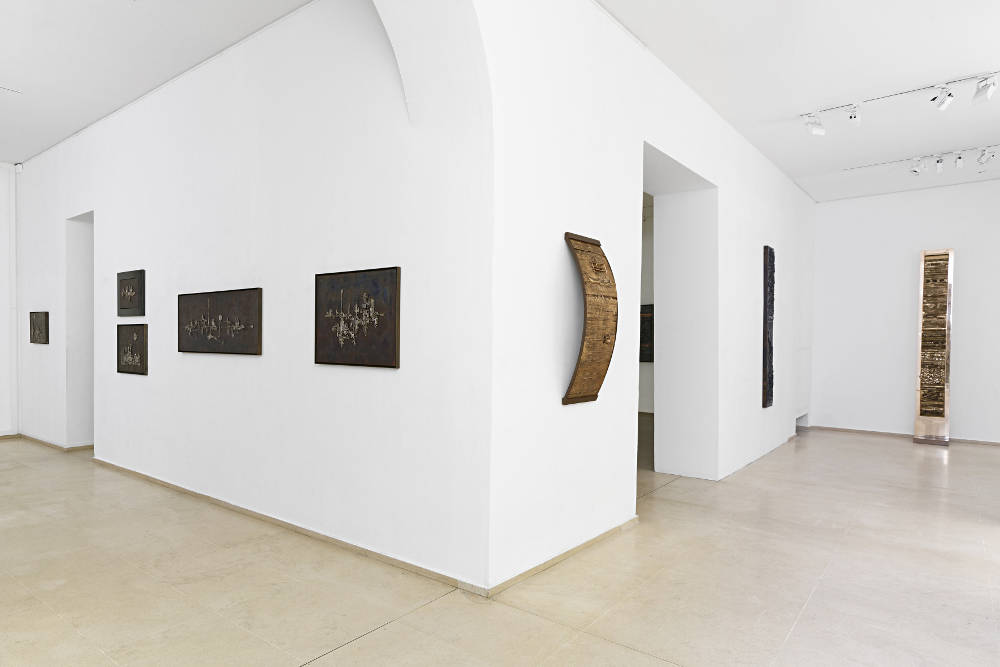 The exhibition documents Arnaldo Pomodoro’s early creative development from 1954 onward, a decisive starting point of this period being his move to Milan the same year. There, the sculptor begun weaving wefts made of embossed signs, creating visual conditions that blurred the line between bi and tri-dimension.

‘To me this was a period of great intellectual exchanges,’ says the artist, ‘with the meeting of Lucio Fontana and the group of young Milanese that Enrico Baj and Sergio Dangelo had gathered together in their magazine “Il Gesto”. It was the time of Manzoni and Castellani’s “Azimuth” group, of the Germans of the “Zero” group, of Gastone Novelli and Achille Perilli and the “Esperienza Moderna”, together with the great generation of architecture and design, such as Gio Ponti and Ettore Sottsass’.

Tornabuoni Art is bringing together for the first time more than 30 of Pomodoro’s most iconic works of the period 1955- 65 in this show: the silver, lead and bronze bas-reliefs, made up of a dense series of rhythmic markings, a track of knots, resembling a sort of imaginary archaic writing. This kind of work led Pomodoro to an understanding of the abstract sign as a formal unit, and to the creation of the first Colonne del viaggiatore (Voyager’s Column), the Tavole (Tables), and fundamental works such as Luogo di mezzanotte (Midnight), Grande tavola della memoria (Large table of memory), and La Macchina del tempo (The Time Machine).

During the 1960s, Pomodoro’s work evolved from the bas-relief to more sculptural, complex and large-scale forms. Pomodoro approached three-dimensional form initially by bending and modulating at surfaces, and then by working on the structure of Euclidean solids (cubes, spheres, cylinders, discs, cones, pyramids). Disrupting their pure geometric forms and corrupting them from the inside out through corrosions and perforations, the artist reveals a mysterious and complex interior. La Ruota (The Wheel), Il Cubo (The Cube) and the first sphere, Sfera n.1 – all included in this exhibition – are thus born. The juxtaposition between the polished perfection of the geometric exterior and the chaotic complexity of its interior became from this point onwards the artist’s trademark.

More recent works, realised between the late 1970s and 2010, are also included in this show: for example, the Aste Cielari (Sky Shafts), Stele and Continuum series.

A monographic publication, edited by Luca Massimo Barbero, accompanies this exhibition, offering a new interpretation of Pomodoro’s work through an in-depth historical and critical investigation of the decade 1955-1965. The volume also features rich documentary and archive material and imagery, provided by the Fondazione Arnaldo Pomodoro.

<< An internationally acclaimed master like Arnaldo Pomodoro o ers a creative surprise to the contemporary eye that goes back to his origins, to the creation of a completely original sculptural universe. The idea behind the exhibition is precisely that of an excavation, of a sort of ‘coring’ in time, from 1955 to 1965, in order to look into the gestation and development of Pomodoro’s work, to explore the roots of his thought, which has grown to encompass a universal and international form. >>
Luca Massimo Barbero