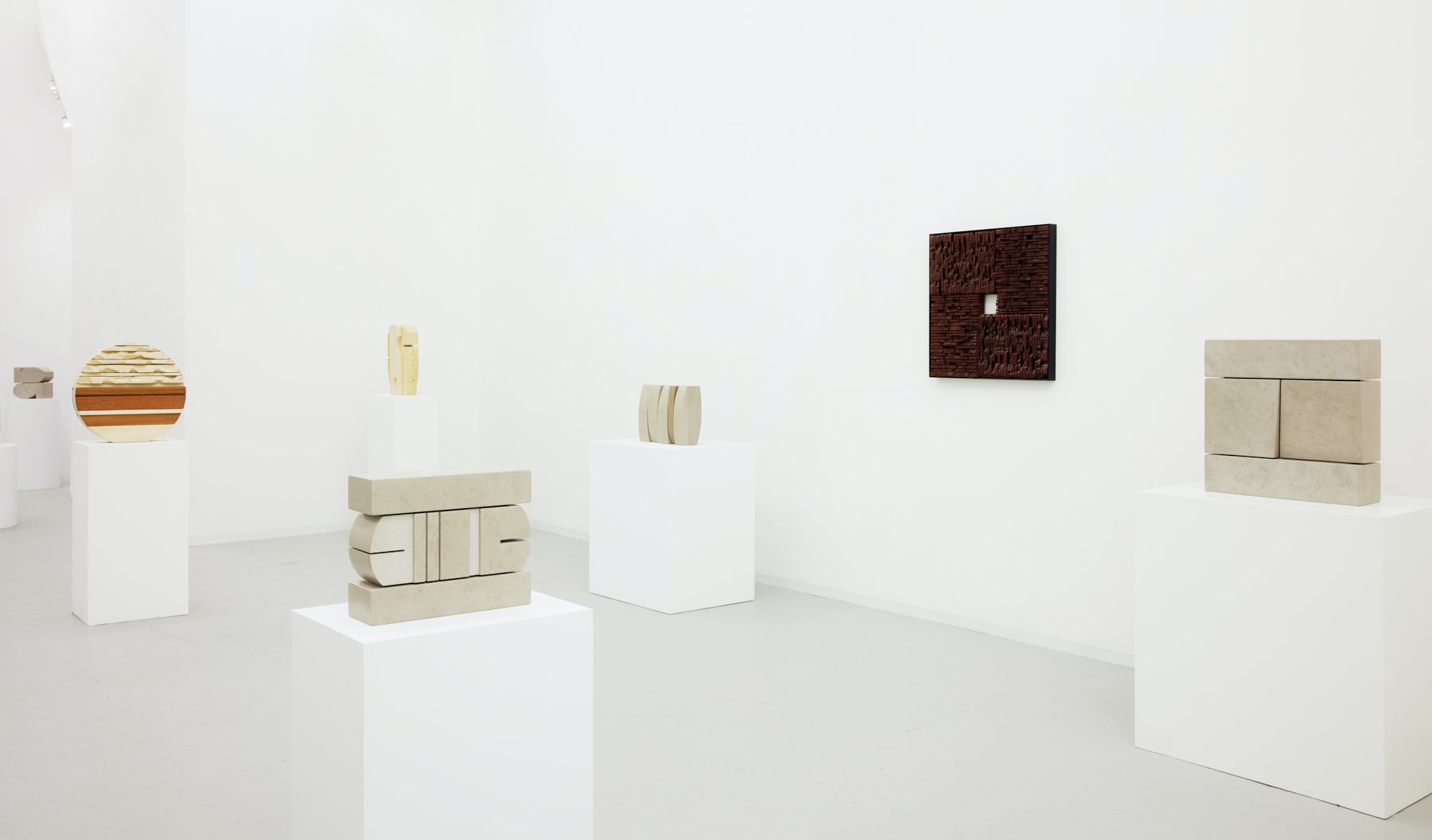 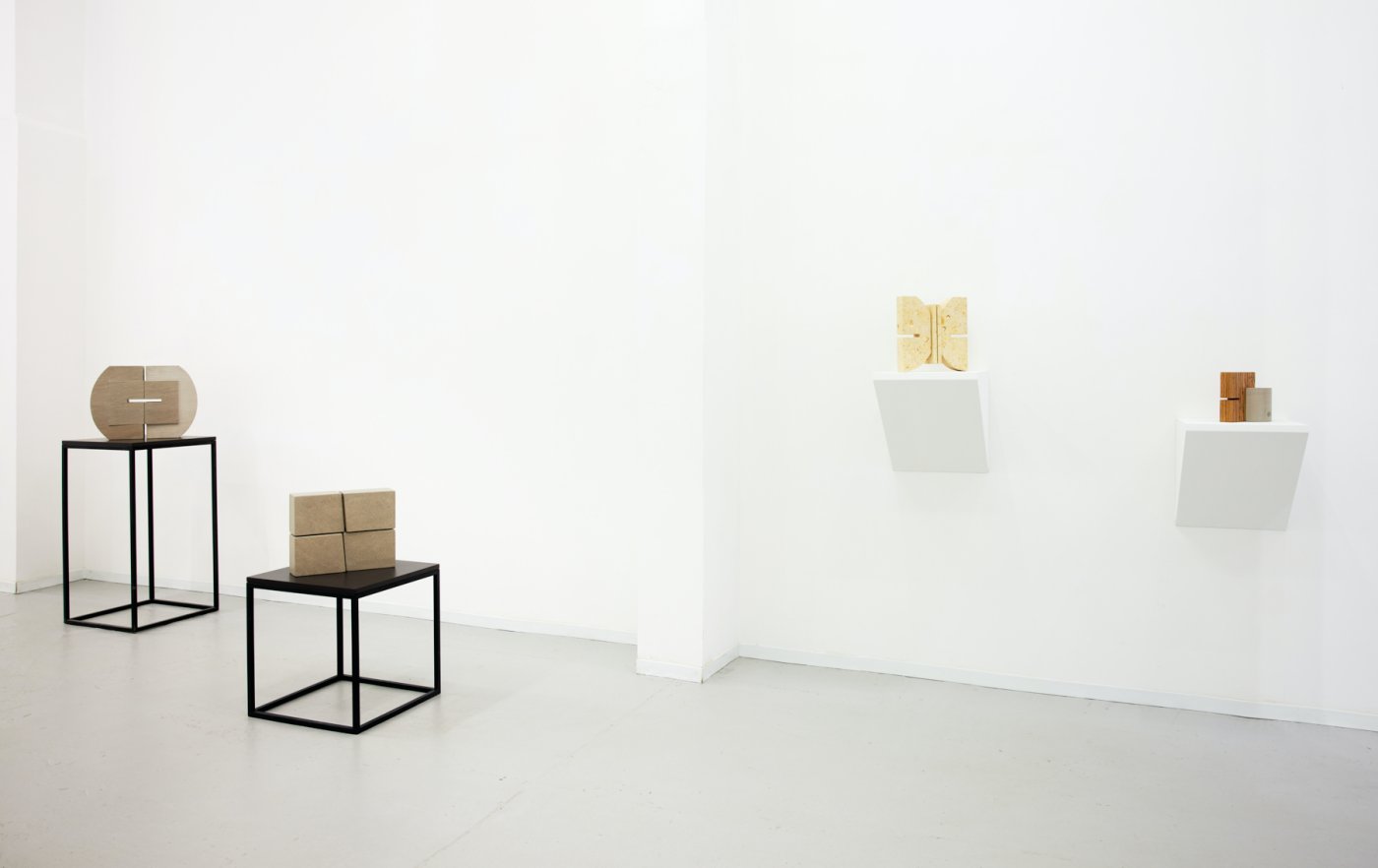 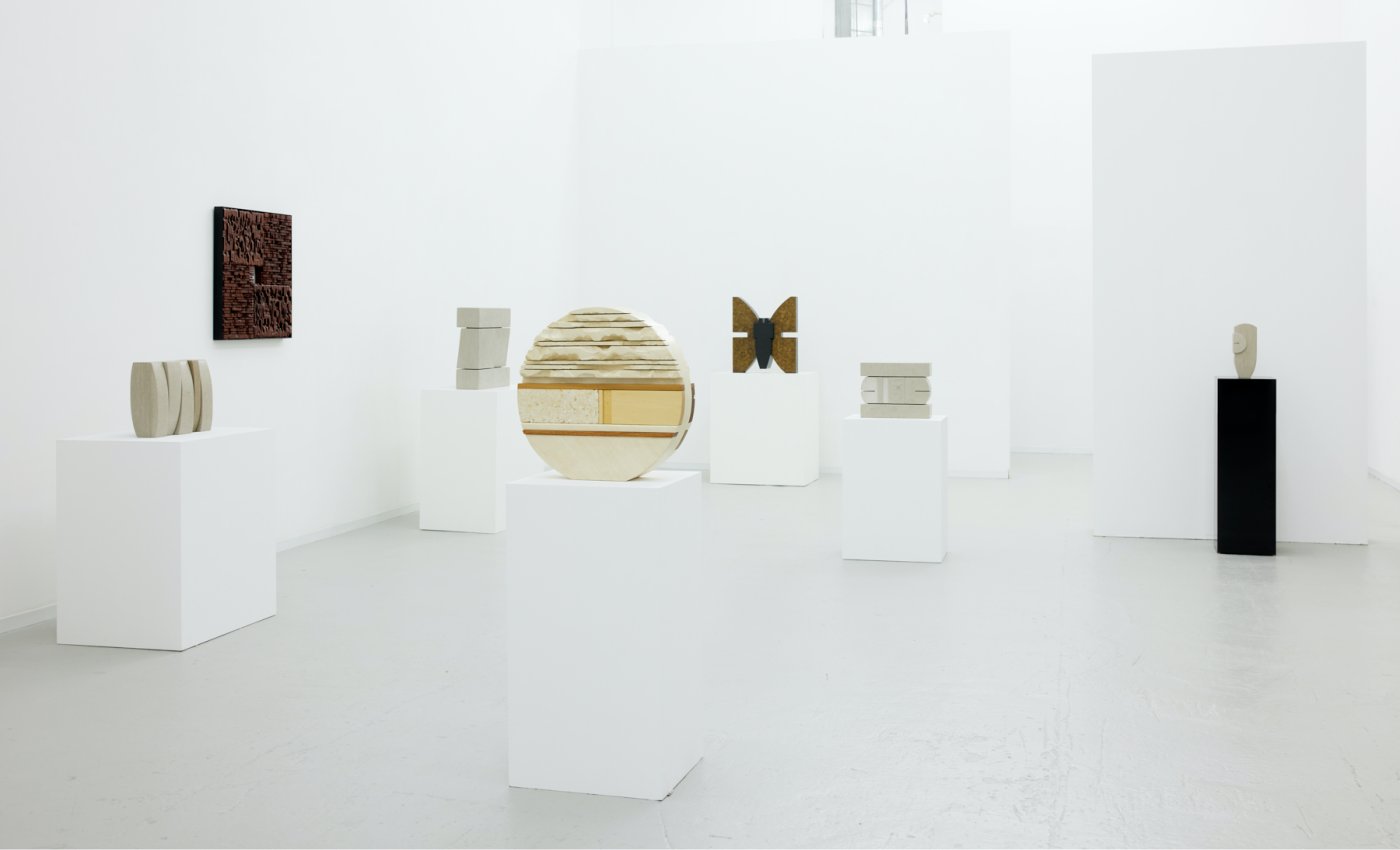 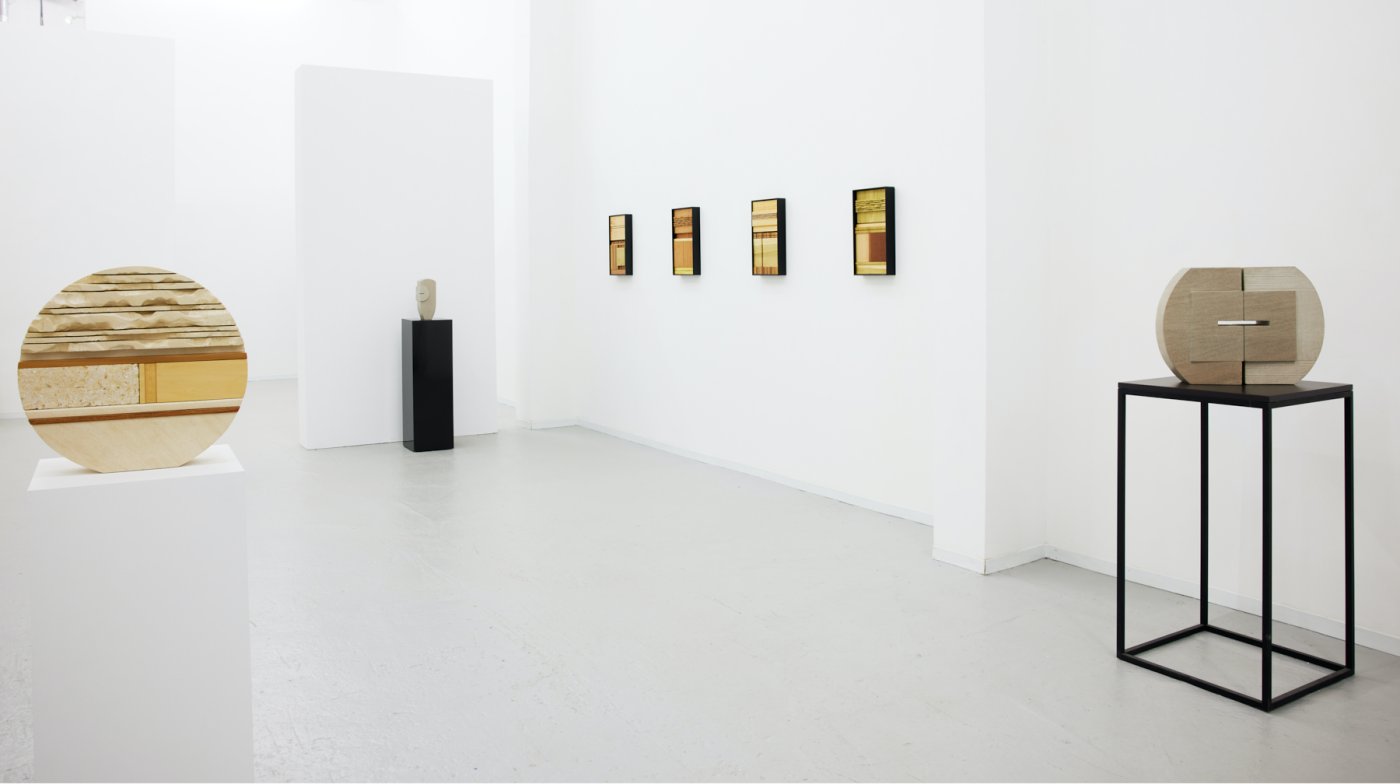 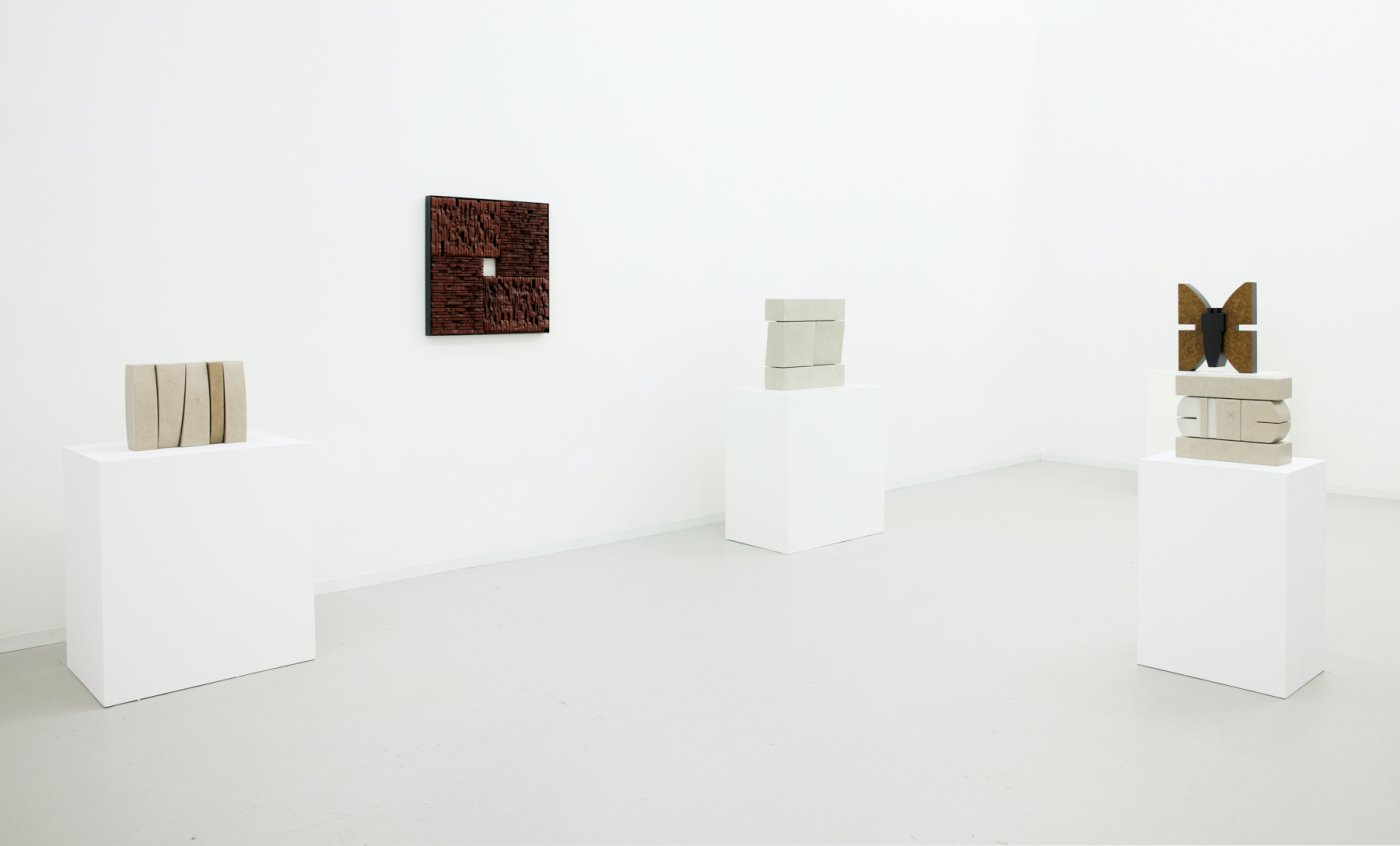 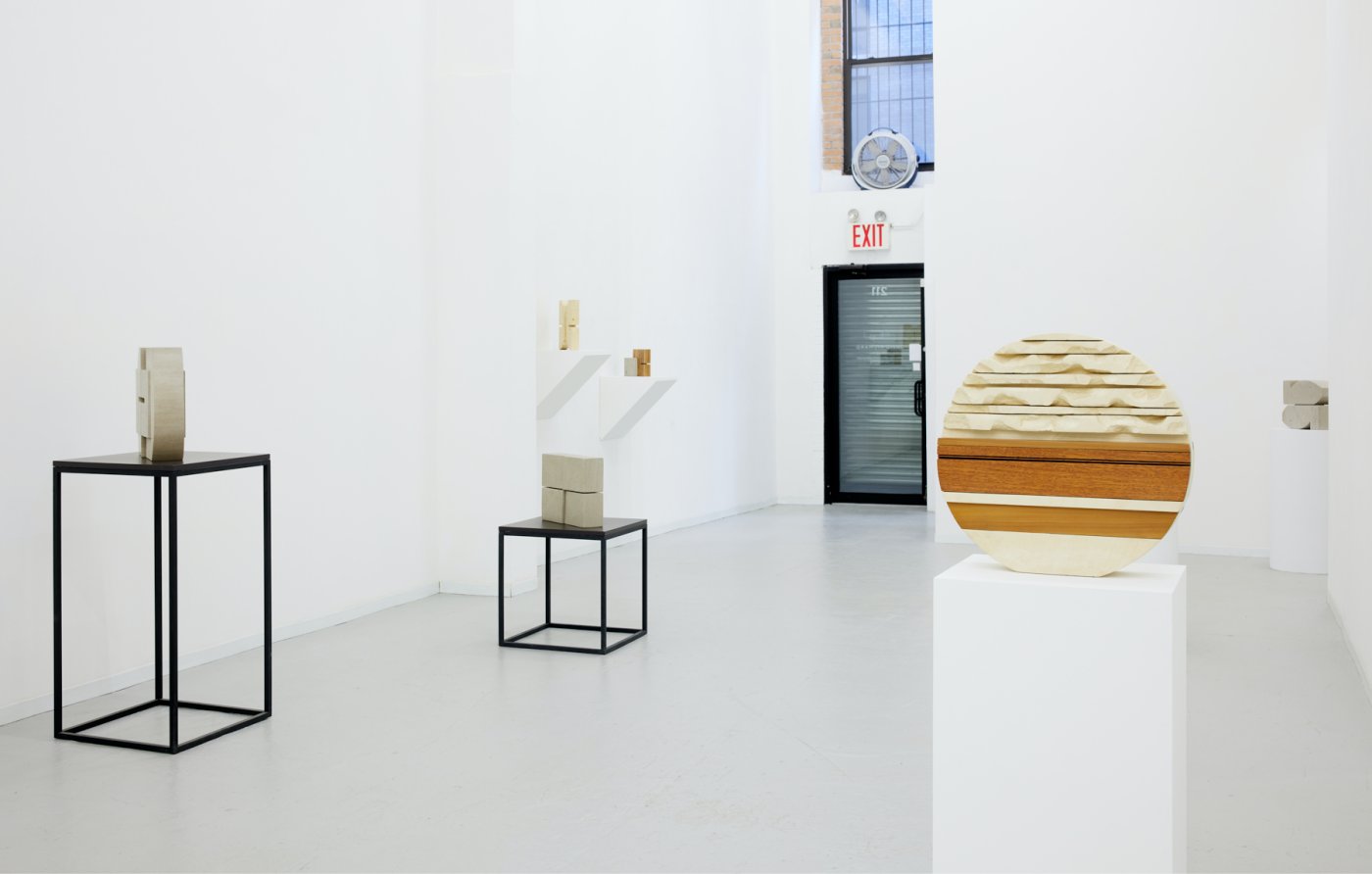 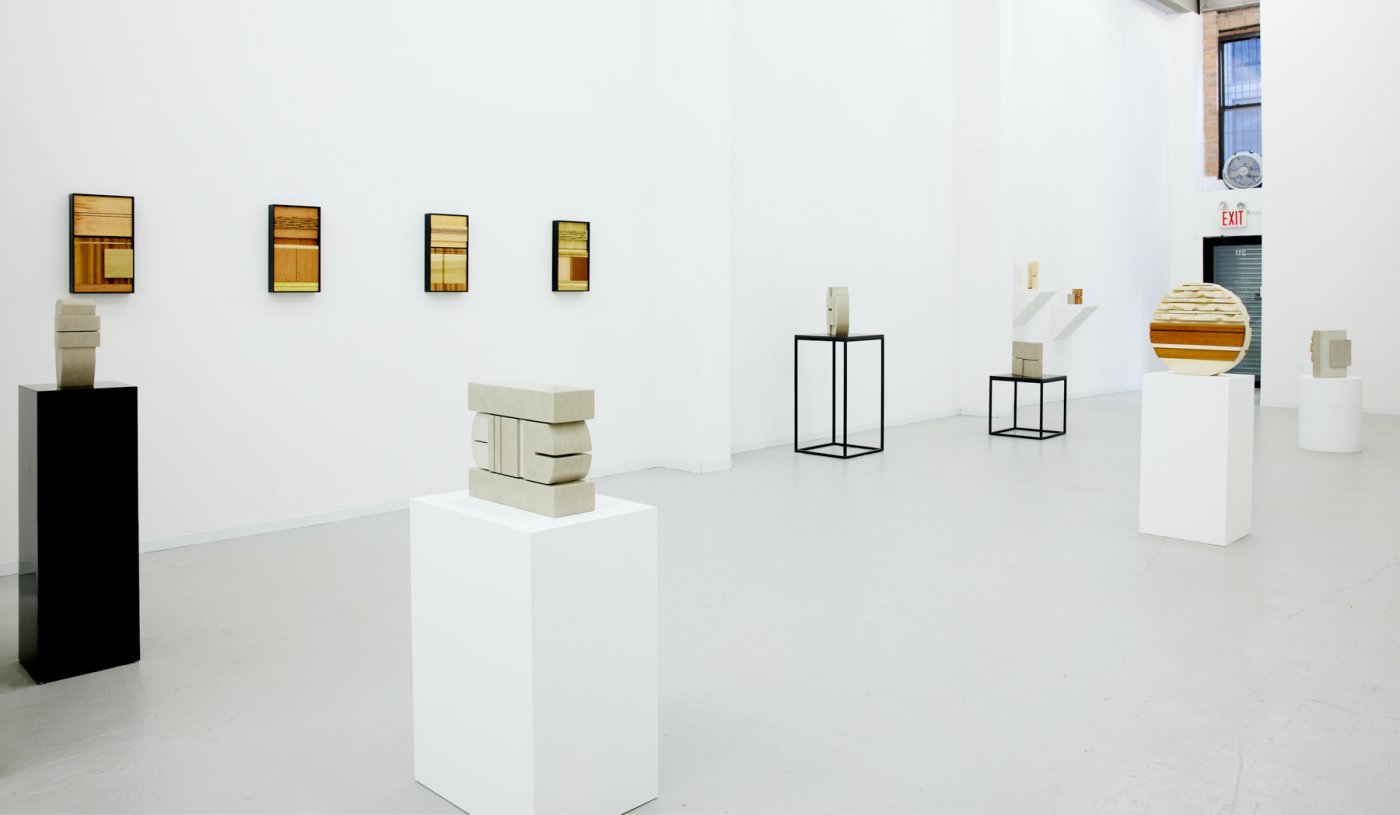 The presentation includes 19 new and recent sculptures and wall reliefs in a variety of carved and polished stones and wood. Namingha’s artworks are clean lined and minimalist, reductions of complex imagery such as the landscape, pueblo buildings, people and animals, butterflies and fish as well as abstractions that include cultural symbols, the fifth world, timelines and Mother Earth.

The five wall reliefs in this presentation are all made of wood with combinations of planed, cut, and carved surfaces in a variety of woods such as Jatoba, Sitka Spruce, African Mahogany, Zebra, Poplar, Yellow Heart Wood and Curly Maple. Each assemblage, mostly of geometric compositions are housed in sturdy, deep, black aluminum frames. The 14 pedestal sculptures include: eight works made of Indiana Limestone; one bronze; and one Texas shell stone. The remaining four sculptures are comprised of combinations of: Indiana Limestone, Utah picture stone, Texas Limestone, Texas Shell stone and Bass, Zebra, Poplar and African Mahogany woods.

About Arlo Namingha and His Artworks:

Namingha’s artwork is influenced by the earth and landscape as well as general beliefs and symbols of the Tewa and Hopi Native Americans. The Tewa-speaking, Pueblo people live near the Rio Grande north of Santa Fe in New Mexico, which is the northeastern portion of the Hopi Reservation. Such influences are often a common influence and thread of connectivity among and between Native American artists. Their cultures are often rooted in the land and beliefs that humans are from the earth and return to the earth, thus creating a connection between all people from the past, present and future.

The earliest works of Namingha were carved kachina figures that he created alongside his grandparents. The kachina’s exemplify the cultural influences on his work as they are eternal messengers who communicate between earthly and spiritual beings. His later versions were simplified and reduced to lines and the essence of the figures, making them more contemporary and abstract while still retaining his cultural heritage.

However, the greatest influence on Namingha’s aesthetic and artwork was his father, Dan Namingha, and other artistic family members, as noted above. Dan Namingha, an established and highly collected Hopi painter and sculptor, has artworks included in the permanent collections of more than 30 major museums. Dan is a great-grandson to Nampeyo (1860-1942), considered to be the first internationally recognized Native American artist and often acknowledged for reviving the tradition of Hopi (Sikyátki Style) pottery; grandson to Dextra Quotskuyva Nampeyo (born September 7, 1928), the first Nampeyo potter to make commodity works for public sales; and his mother, Hisi Nampeyo, also an internationally recognized potter.

However, Arlo Nimingha’s work is also influenced by issues beyond his culture and home, his newest series are very much inspired by current events. While he may find the issues urgent or troubling, he sees hope in resolution through dialogue and interaction between people. Thus, several of the new series, including: Dialogue, Fifth World and Shift have works that can be assembled, rearranged and fragmented by the viewer and presented how they choose. This engagement with the artworks is essentially a dialogue and exchange of new ideas and new possibilities between the viewer and the artist. A tangible demonstration of how an artist can open up and provide a path for new ideas and compositional suggestions into his process and work through the viewer, who, in return, is not only expressing their opinion, but also putting themselves out there for open critique of such suggestions. All in all, the artist sees this healthy exchange of ideas as a metaphor for everyone to take such steps with the more consequential and pressing issues facing our respective families, hometowns, cultures and society.

The multicomponent and interactive works by Namingha noted above in the Dialogue, Fifth World and Shift series have a very interesting construction. Each of the subunits have smooth and polished exterior surfaces, yet the interior surfaces are rough and resulting from the elements being partially cut around the perimeter and then broken in a semi-uneven fashion such that when reassembled, they fit together and interlock to create a stable and solid single structure. Perhaps a metaphor for a positive outcome if people of diverging viewpoints would come together in conversation and share their differences, then maybe a single, solid and strong structure could be the result.