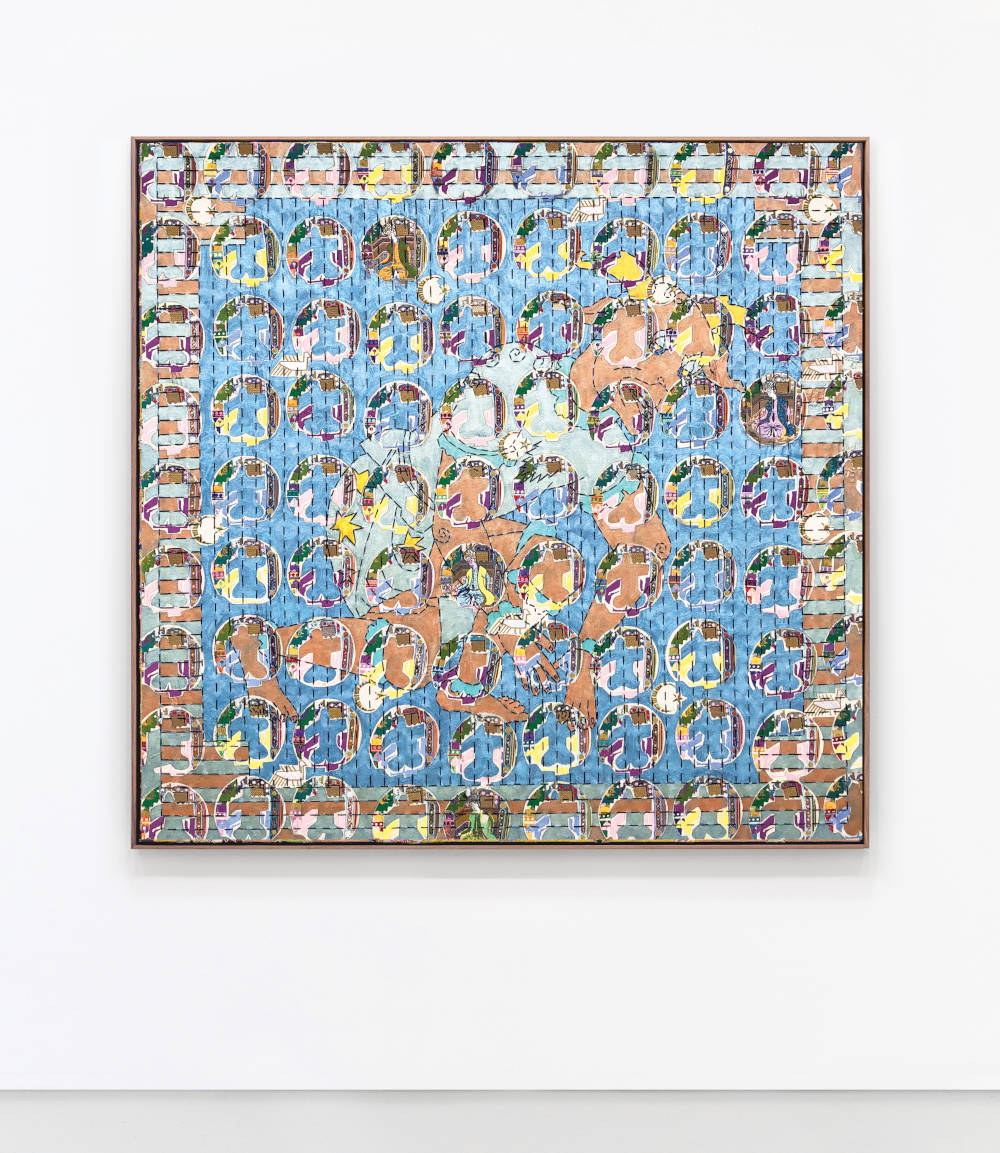 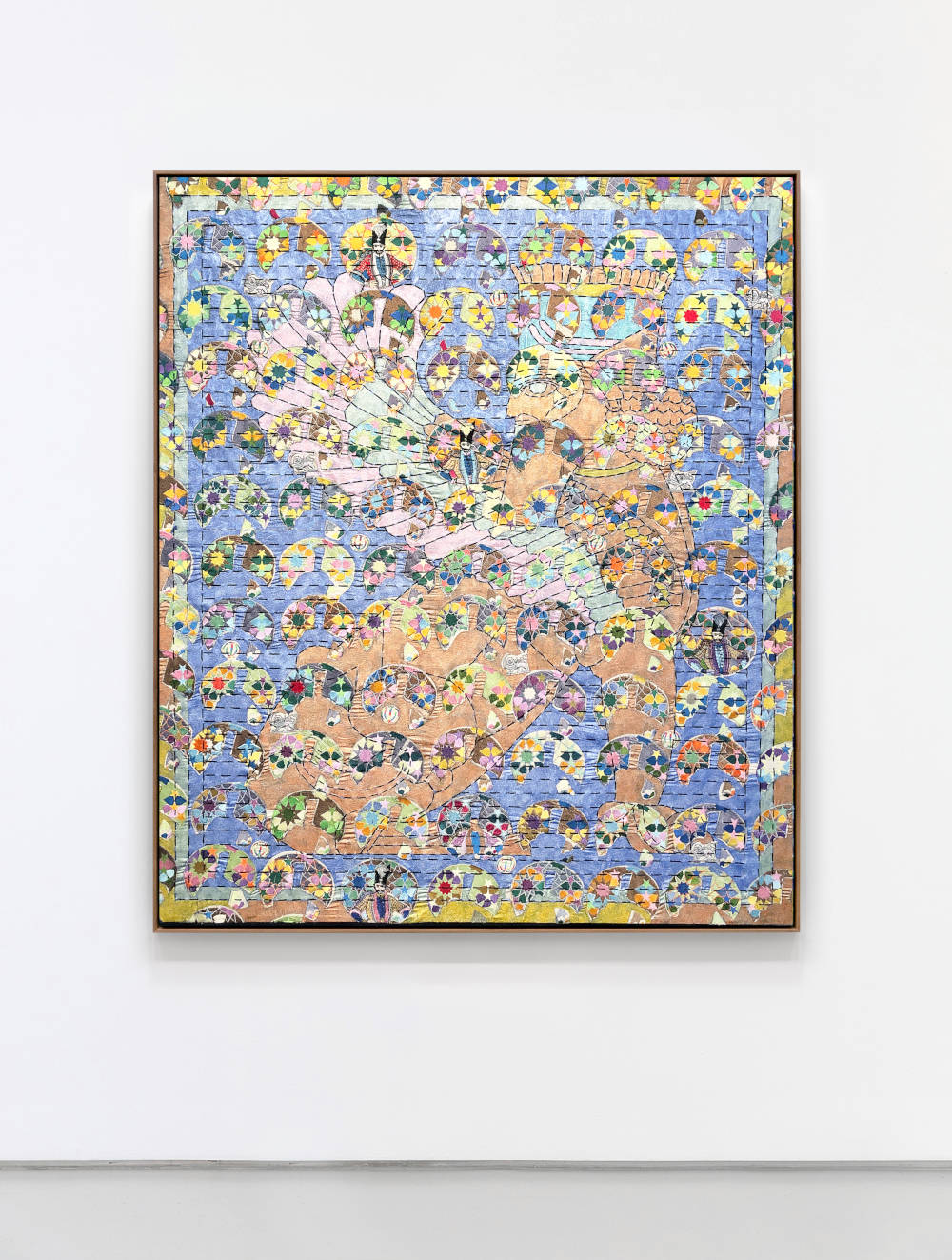 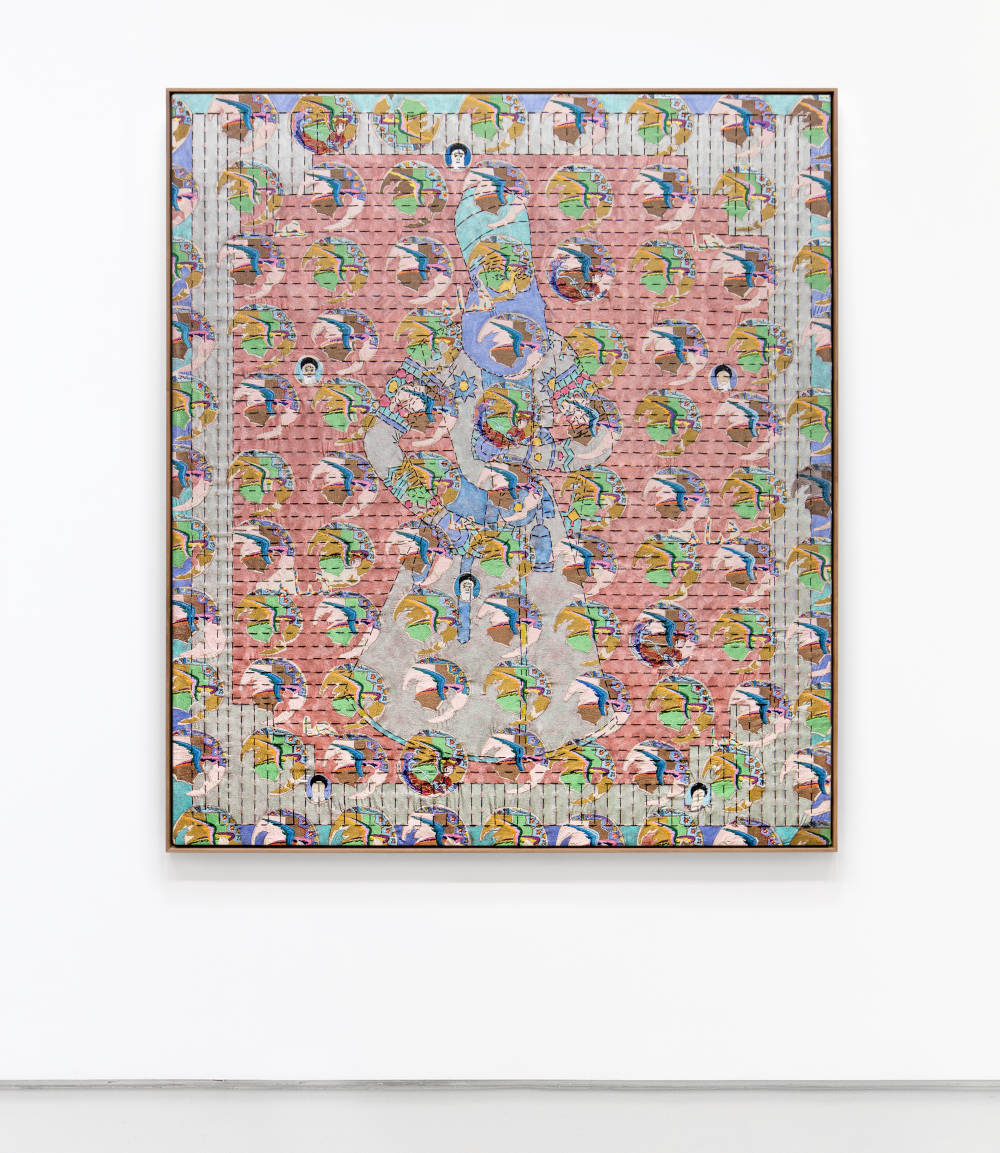 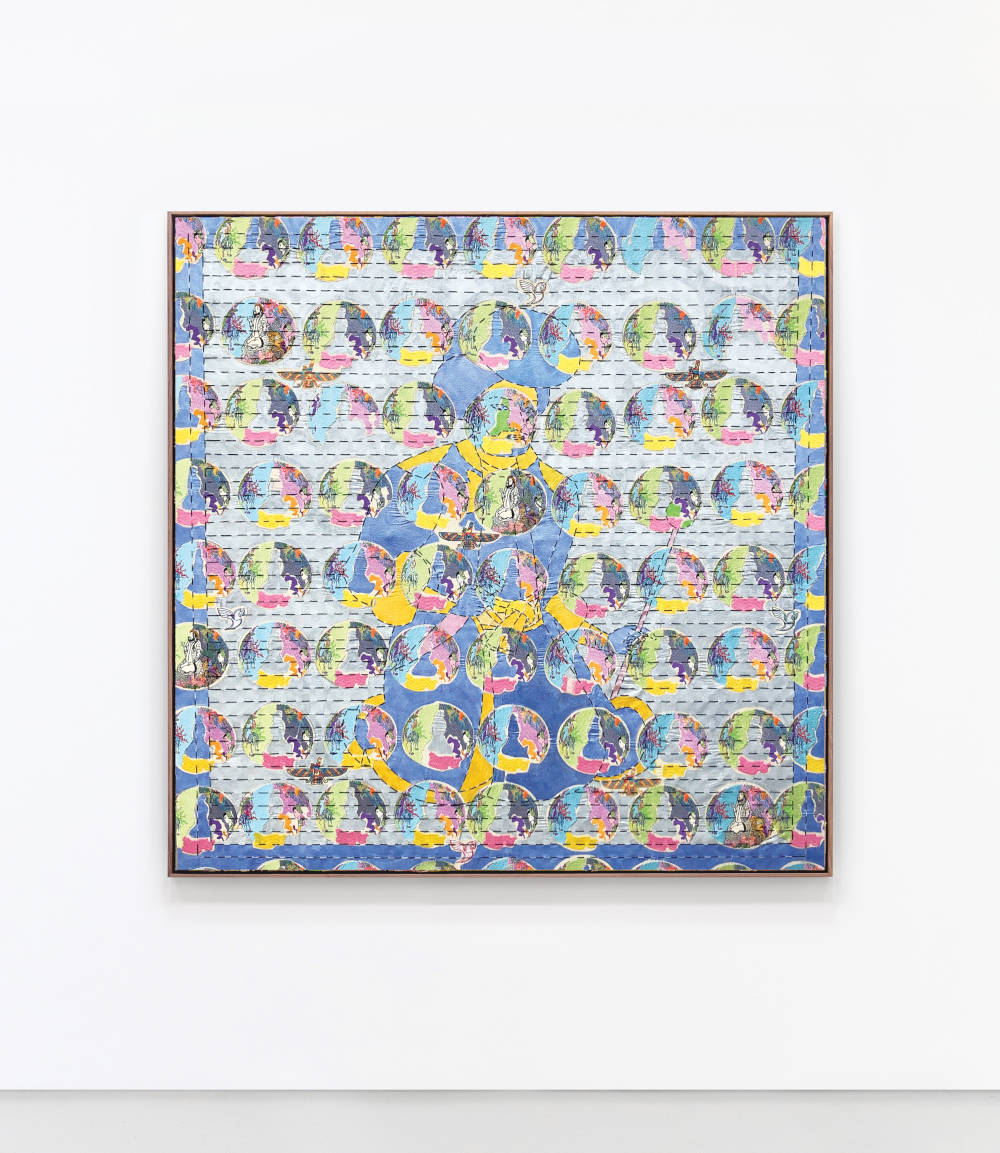 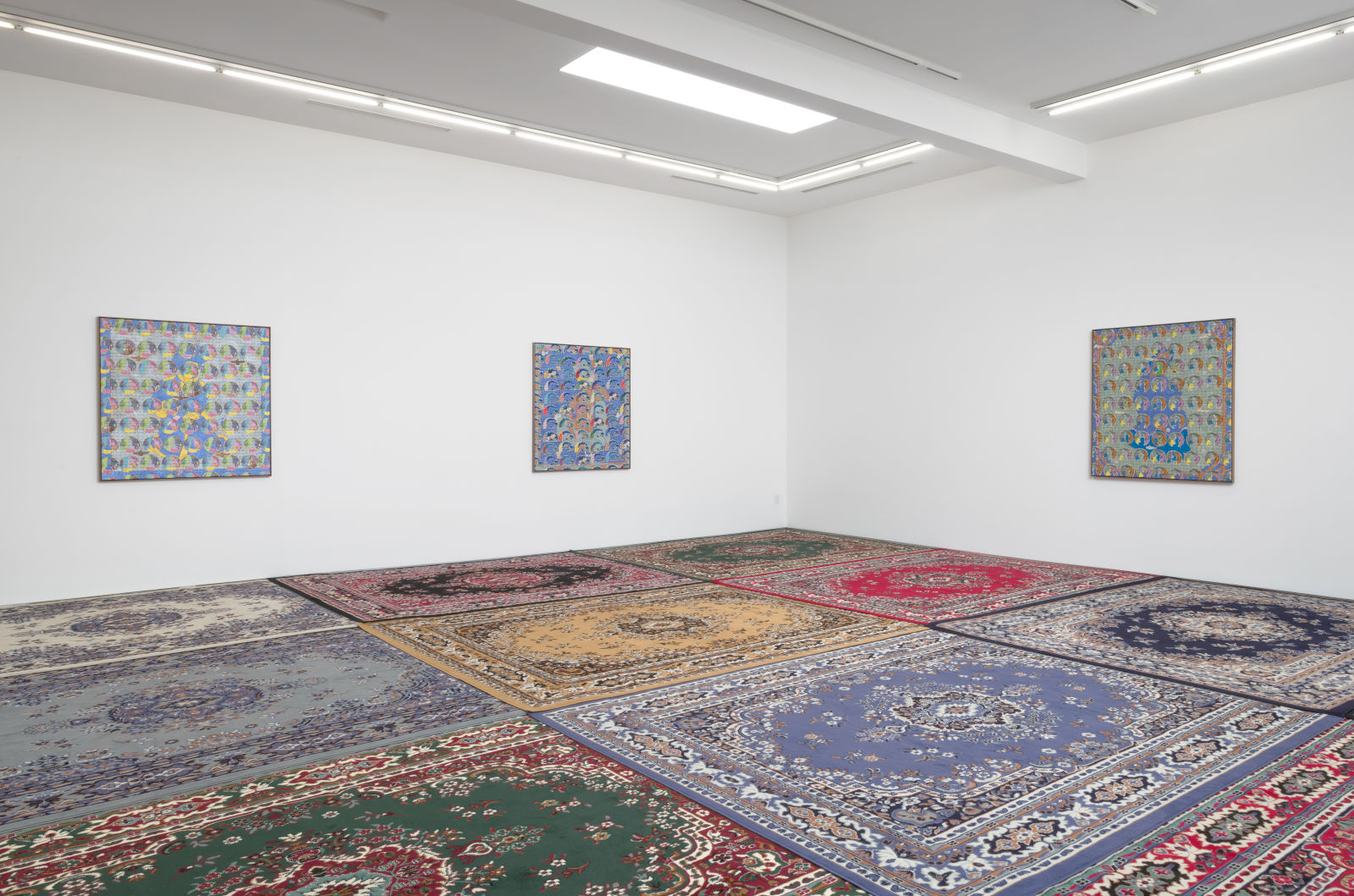 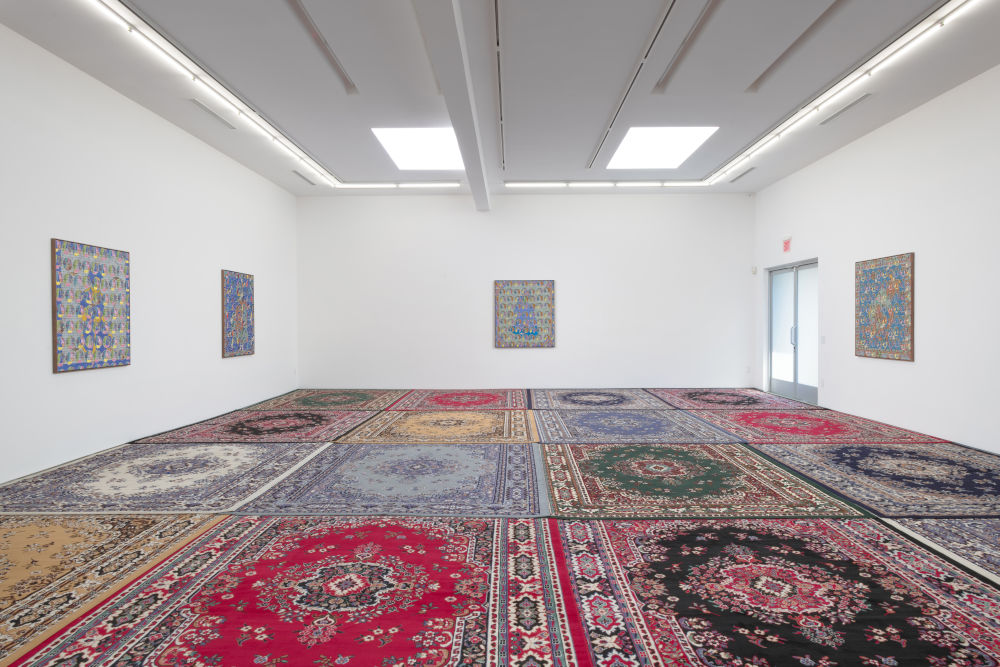 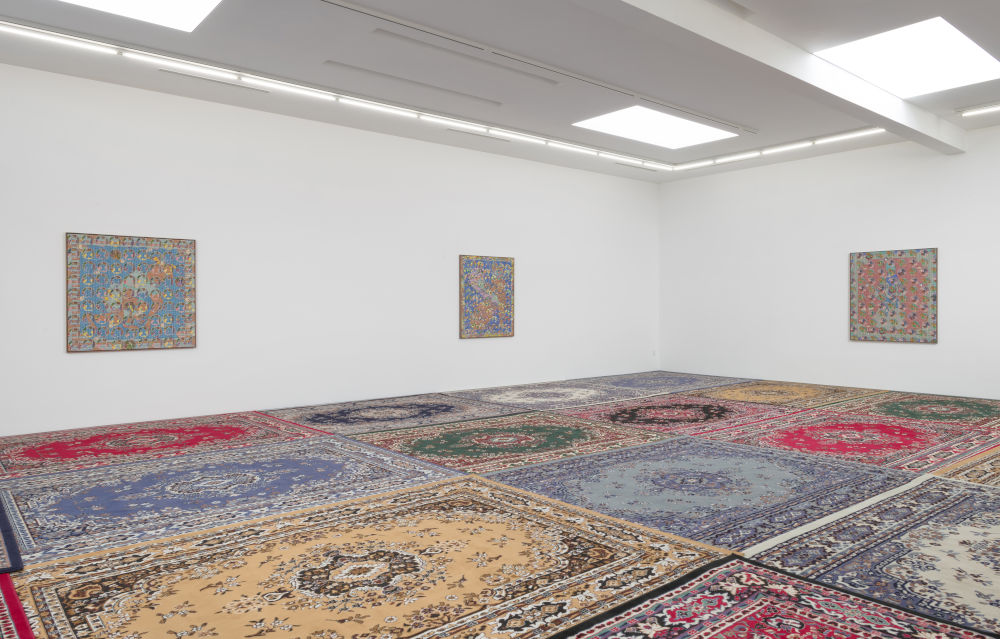 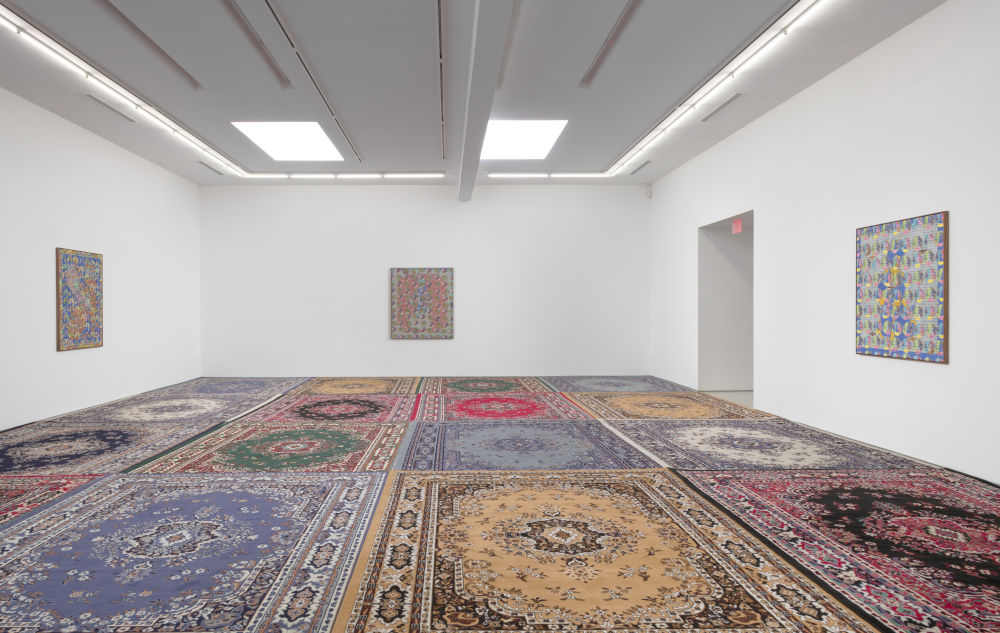 Tabrizi’s hand-embroidered textile pieces address the intersection of cultural renewal and historical understanding of heritage in contemporary society. This new body of work is a personal journey in search of the artist’s own nationalistic identity, while understanding the role of these physical places in the cultural, geographic and political landscape of today. Taking inspiration from oral history, mythology, literature, and his family’s travels, Tabrizi’s work resonates with his own personal discovery and reconnection with the changing social landscape of Iran at home in Los Angeles.

His series of large-scale embroidered paintings are remarkable for their densely layered narratives, bringing together borrowed symbols, imagery and stories from Iran’s ancient historic books to contemporaneous events. Rendered on canvas, the process is labor intensive and precise. Pearlescent acrylic ink and airbrush is layered over canvas to form a base. Fabric is sewn in to block out specific areas. The artist then intermixes colorful silk thread embroidered by hand and machine-sewn using a scanned digital file to create an imagistic overlay.

Works on paper form another narrative with pages from the Quran collaged together, blackened with gouache, the image drawn with graphite and then hand-stitched with embroidery thread. Employing mainly acrylics and a somber color palette, Tabrizi portrays subjects including still-lifes and mythic figures.

Some of the imagery may read as familiar, such as the symbols used in Persian rugs. Tabrizi sources the geometric motifs from important geographical areas famous for its Persian carpets: Isfahan (where the artist’s family on his mother’s side is from), Tabriz (where the artist’s family on his father’s side is from), and Kashan. Additionally, Iran has several “Official National Symbols” including a historic document, a flag, an emblem, and anthem, in addition to national heroes. Tabrizi pays homage to several of them, including the national flag, Varzesh-e-Pahlavāni (wrestling) and the Lion and Sun symbol (national emblem), alongside the Book of Kings, a 16th century miniature by Iranian artist Riza I-Abbasi and domestic activities.

The title of the exhibition – Masjid, or mosque in Arabic – borrows its name from a dream Tabrizi experienced in his early 20s. In the dream he encountered a figure in a mosque-like environment that he later came to understand, and then render, as an allegorical figure for home in his work.

Tabrizi was born in Tehran, Iran in 1981. His family left Iran during the Iran-Iraq War in 1986 when he was just four years old. After migrating across Europe, they were able to secure visas to the United States and settled in Los Angeles, California where he and his family have lived since. Tabrizi’s creative process is intuitive, largely inspired by his roots and heritage from the East, his education in the West, and the contradictions at play between the two. In this vein, his work calls into question prevailing representations of the Middle East, as well as exploring his own dislocation.