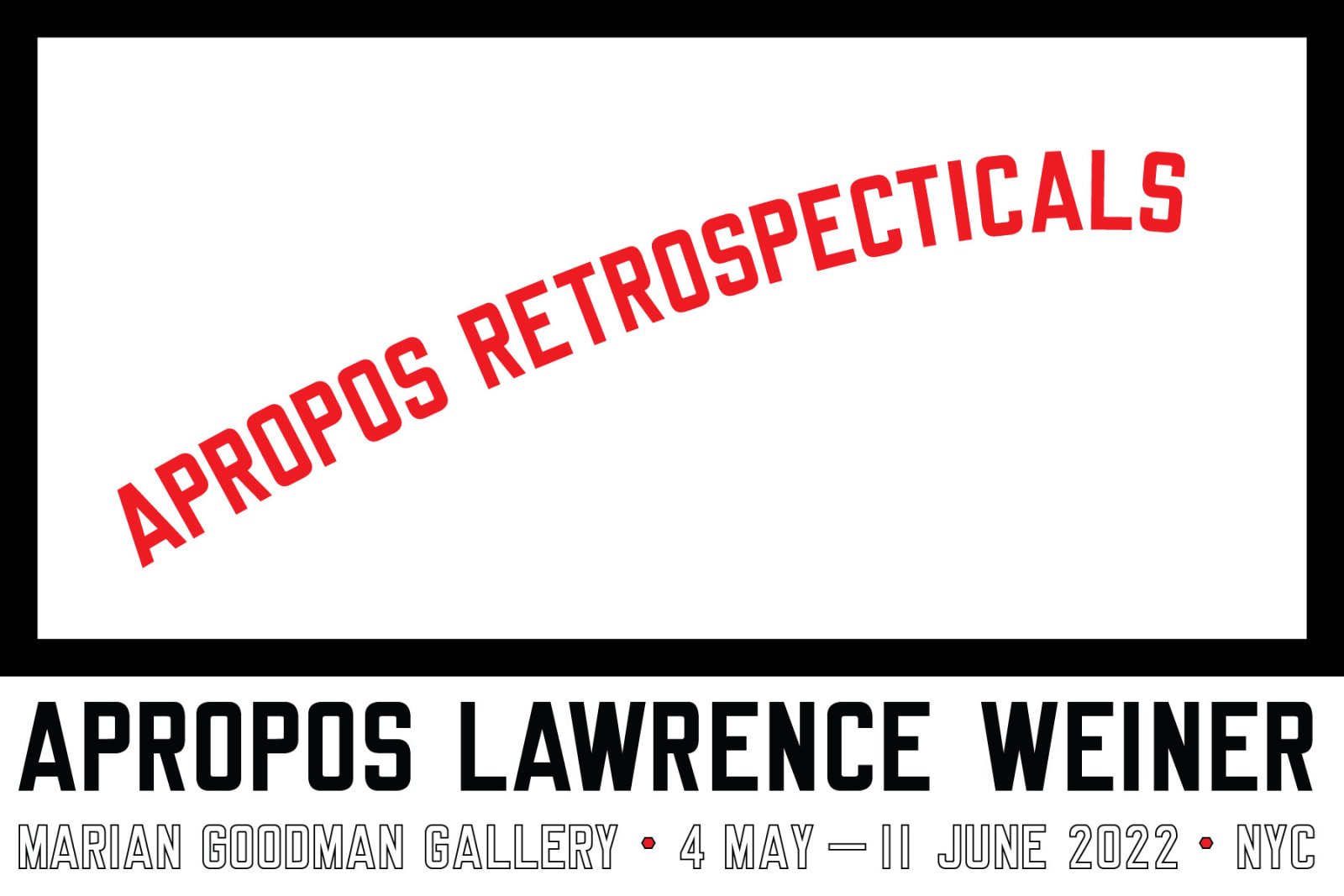 Lawrence Weiner, Artist, passed away at age 79 on December 2nd, 2021. If he had constructed his own obituary, it would have looked like this: LAWRENCE WEINER (DEAD). Marian Goodman Gallery presents this tribute exhibition to commemorate the life and work of Lawrence Weiner, a member of the gallery since 1986. Lawrence was a New York City born and bred Artist, he had embedded himself in the downtown art scene since he was about 18. He is most known today for having taken a strong role in the development of Conceptual Art and the aesthetic parameters that constitute it, which emerged in the mid-sixties.

As American as cold Borscht with a hot baked potato, he could read and write at too early an age. He skipped Kindergarten (which distressed him) and would later claim at age 10 that Emile Zola was his favorite writer and taught him about romance. As he grew up, he flirted with Catholicism and Kabbalah mysticism. While developing an art language that was essentially collaborative with his audience, he referenced Piaget, Russell, and Wittgenstein, whose ideas on language helped Weiner focus on the cultural landscape as he saw it.

You may wonder, what does all of this have to do with an exhibition press release? It is a feeble attempt to show some sources and remnants of a life well lived, ideas brought to fruition that were presented as something called Sculpture. Or call it Conceptual Art, or describe it as Dialectical Materialism, or by sceptics, as Poetry or Bullshit. Weiner had, like most artists, his detractors. Weiner, persevered with his ‘own’ concept that: ‘art is not a metaphor upon the relationship of human beings to objects and objects to objects in relation to human beings….’

The scenario at Marian Goodman Gallery presents fragments of a 60-year career. The entrance door to the exhibition has one of Weiner’s last engagements: an edition made in Japanese and English, of ENOUGH, produced by his studio shortly after his death. The main gallery presents three works made between 1968 to just months before his passing in 2021. In addition to these, a four-sided mirror stands not as a work but as a personal remnant of his being and making, for he could not live—and certainly could not work—without mirrors. And last, a life-saver, REACHING FOR THE STARS PUT ASIDE OR PUT AWAY, made for a 2007 exhibition in Hong Kong which was later enclosed in a plexiglass box containing the text FOR USE IN CASE OF FLOODING to include in his retrospectives at the Whitney Museum of American Art, Museum of Contemporary Art, Los Angeles, and K21, Duesseldorf in 2007.

The smaller gallery holds Weiner’s work table he designed in the early 1990s and had used continuously since. It is emblazoned with his long-held art-making ethos: WHAT IS SET UPON THE TABLE SITS UPON THE TABLE. Placed on top is a tablet showing pages from several notebooks. Across from the table is a poster-filled wall, evidencing Weiner’s graphic range throughout his career. Lastly, THERE BUT FOR, a video made in the mid-1980s, plays twice a day. Functioning as a daily-life TV show that was popular then; in Weiner’s version, a pseudo Art Family, two parents, two children – one of each – live their lives’ As the World Turns.’

Lawrence Weiner’s spirit is infused throughout this show, as was his love for Marian Goodman, her gallery staff, and her continued support of him throughout his lifetime.

And now he is onto his present (a past-perfect still life?).