We live in three places simultaneously: in the body, in the built world and on this earth. Increasingly, the second body (the built world), is the one that controls us the most. In devising a habitus in relation to a habitat, we reinforce – through habit – modes of behaviour that both protect and alienate us from the immediate life of the body and the cosmic life of the planet. – Antony Gormley (2020) 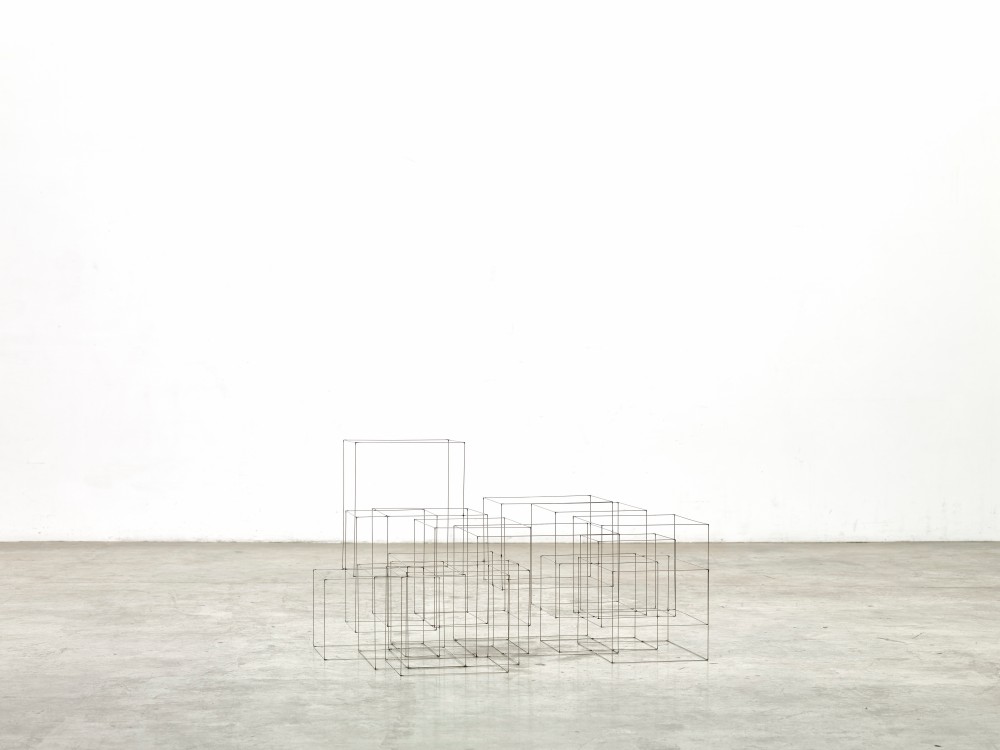 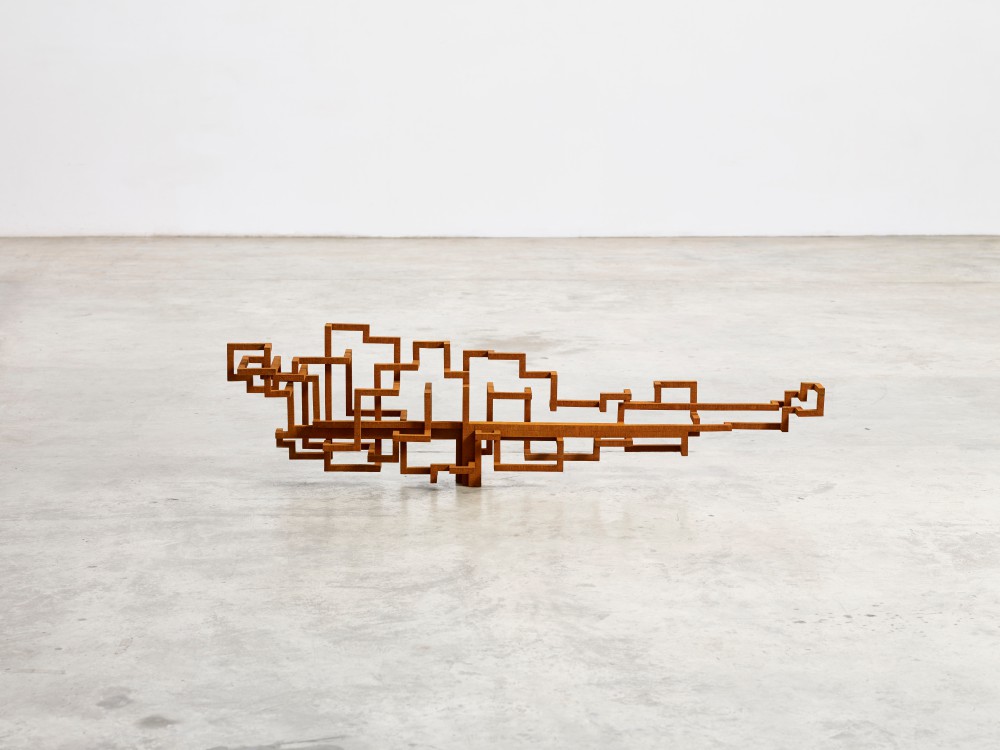 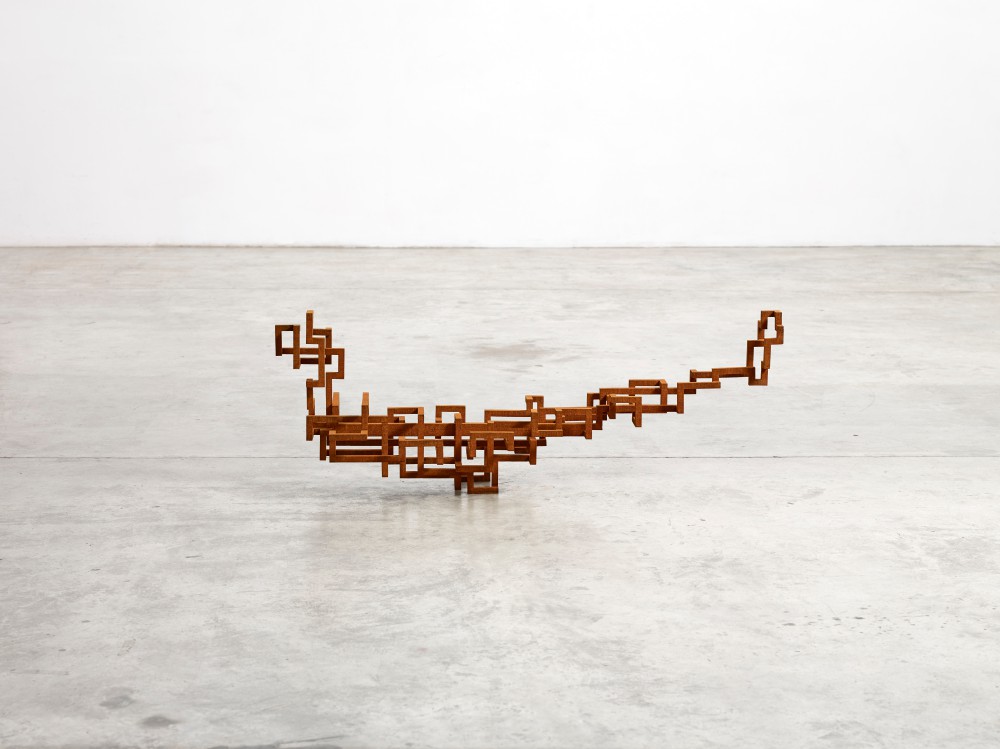 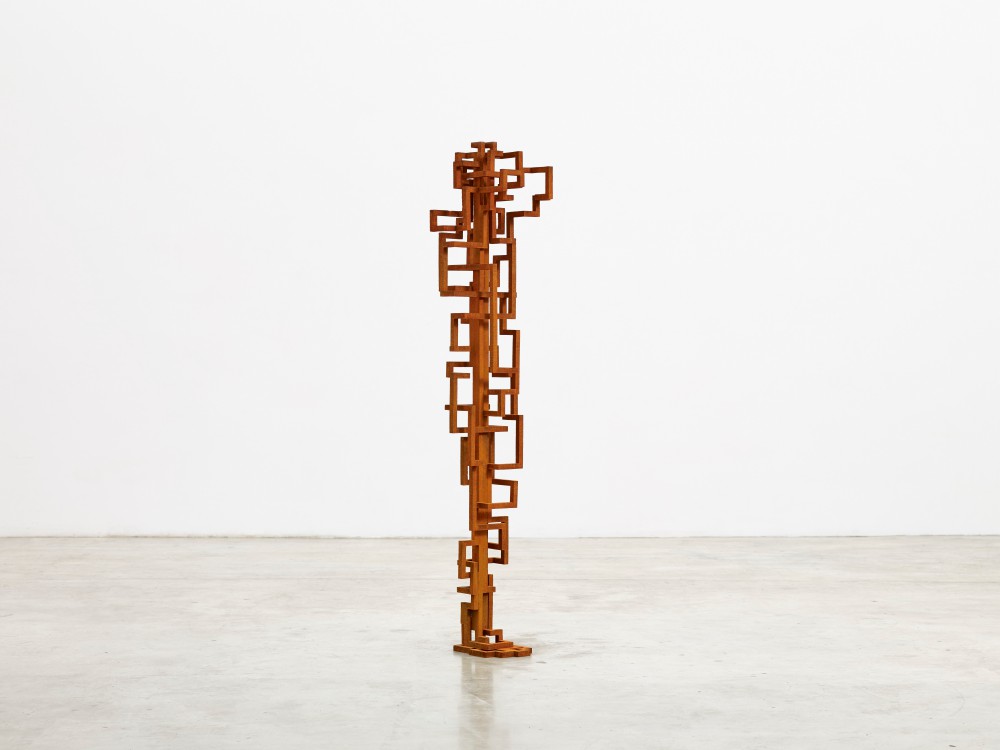 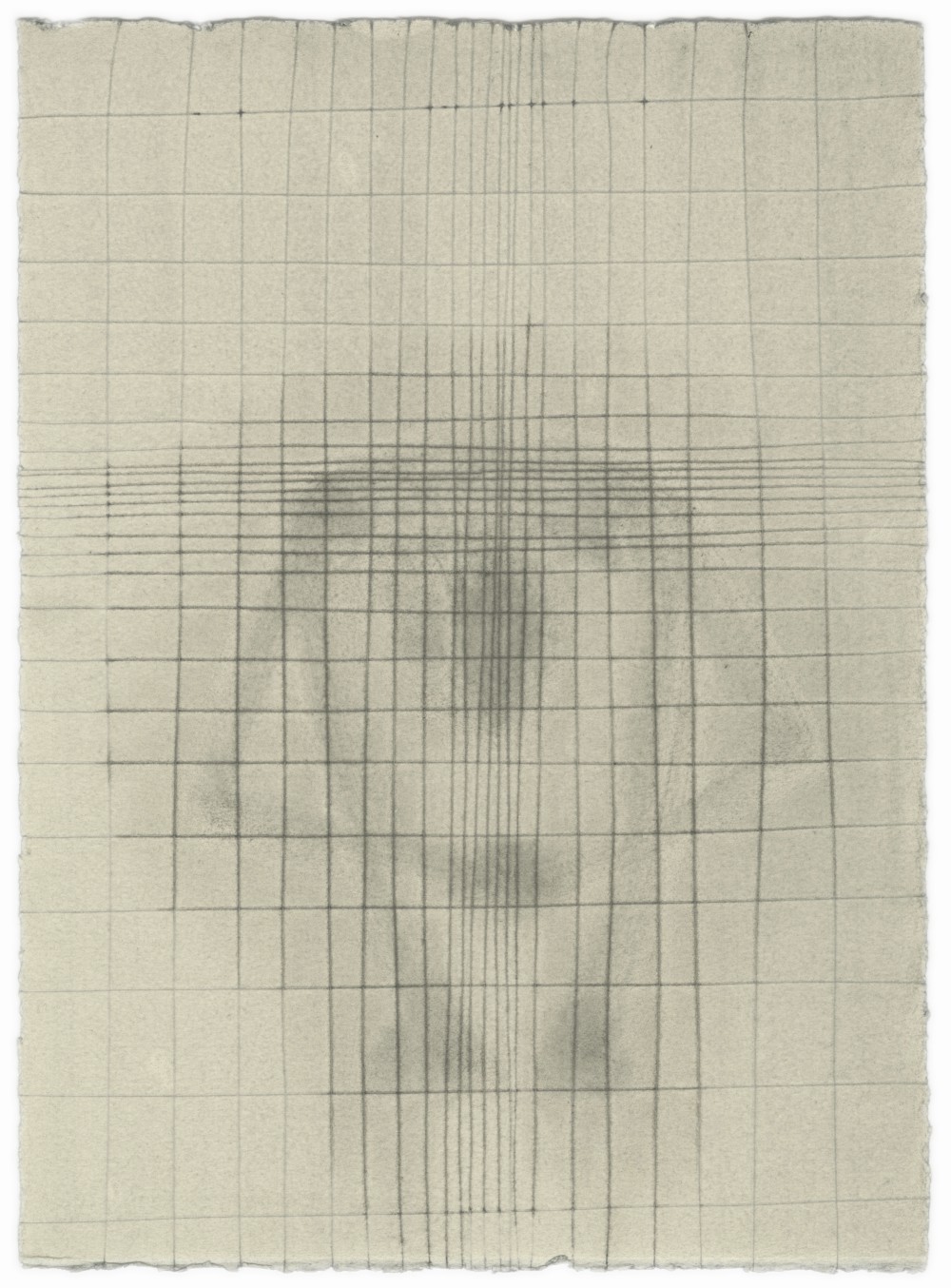 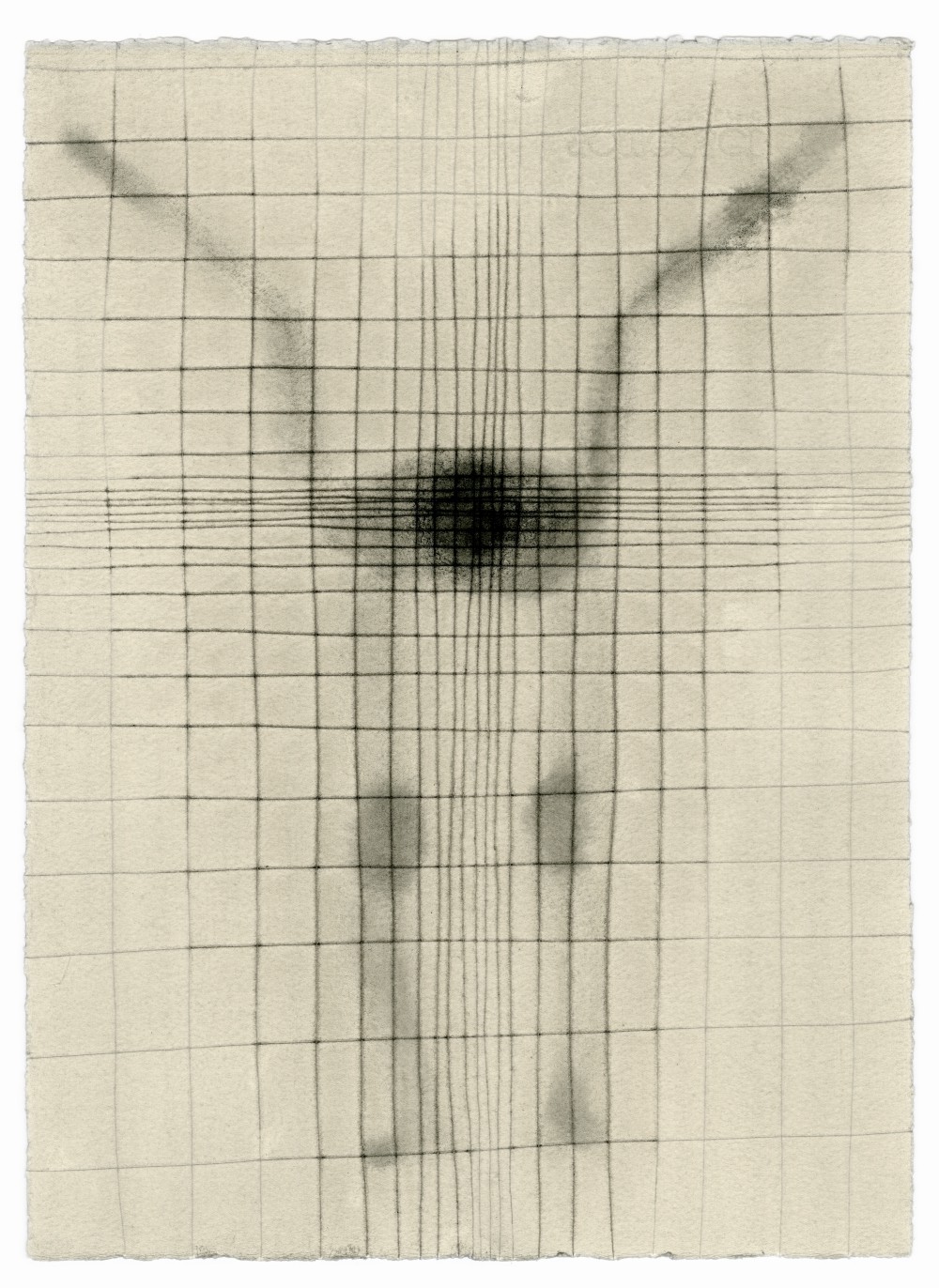 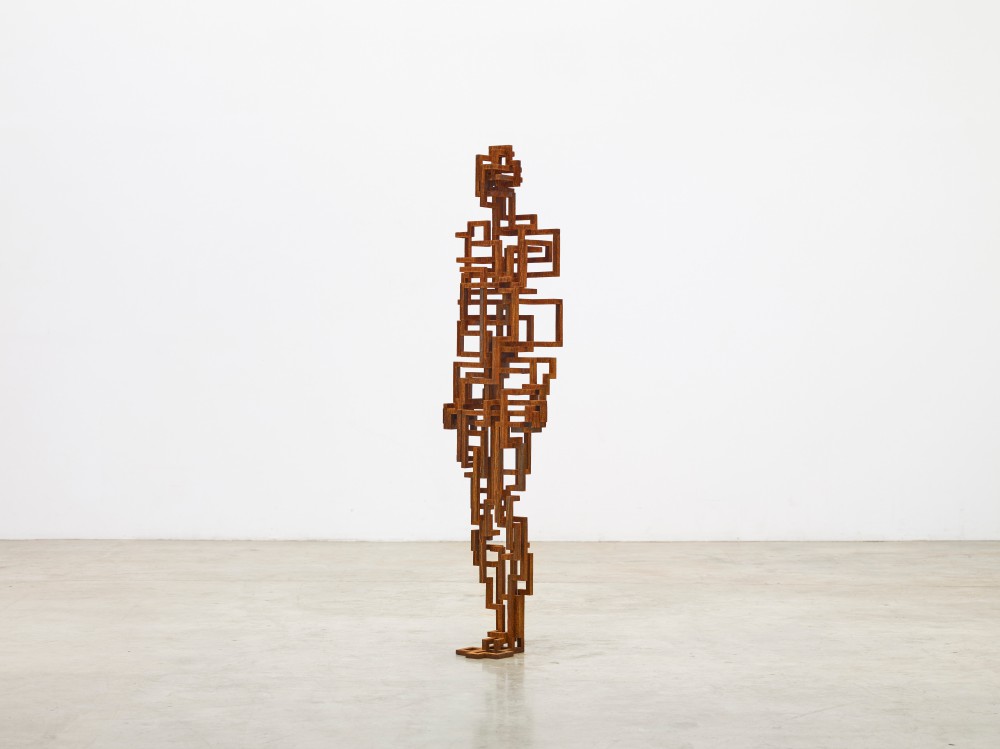 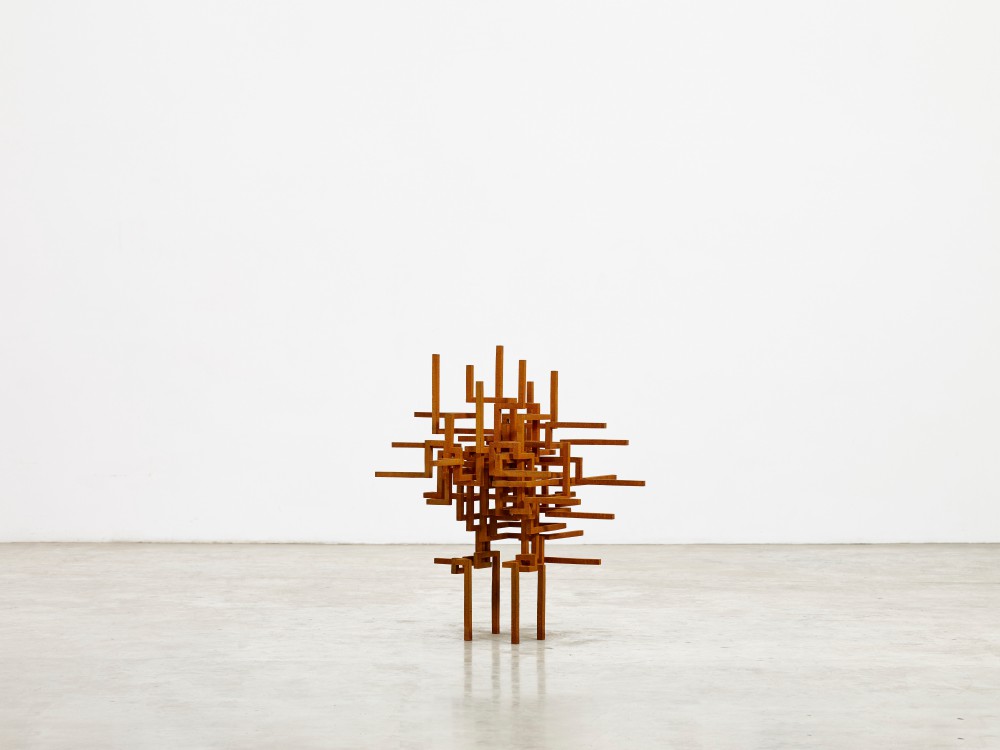 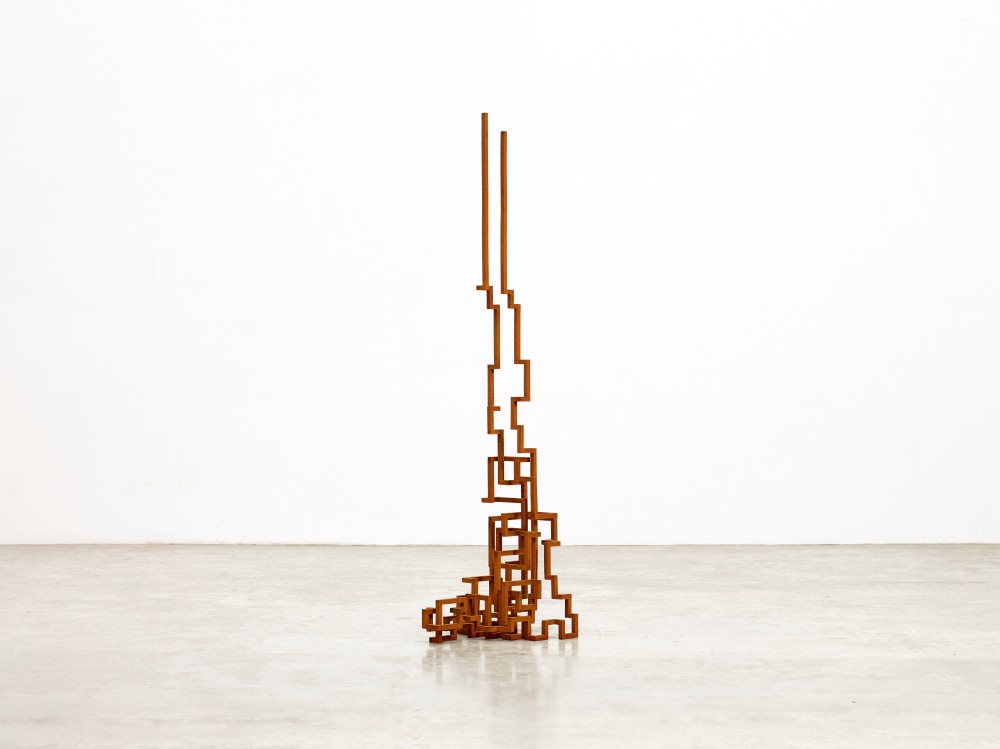 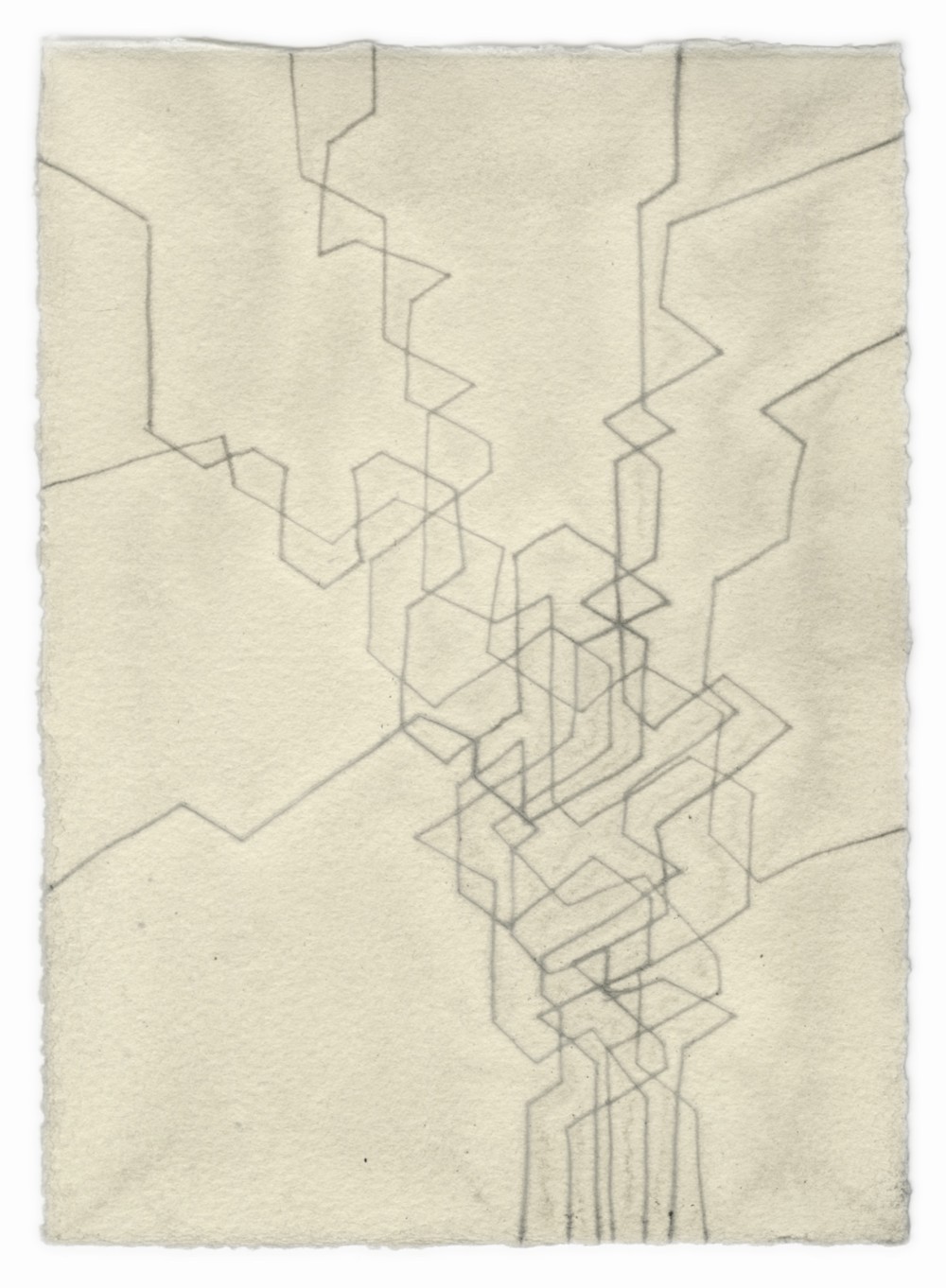 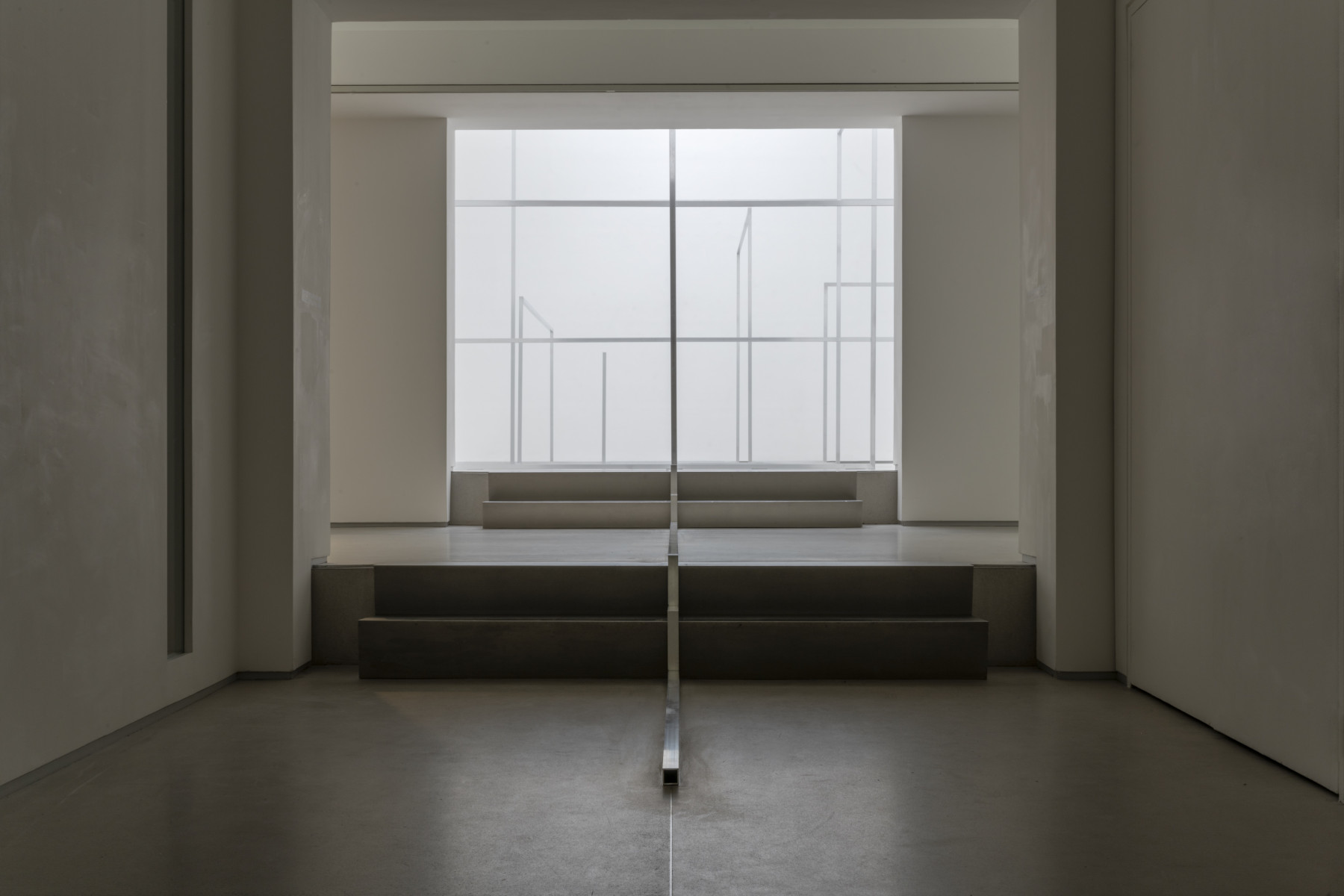 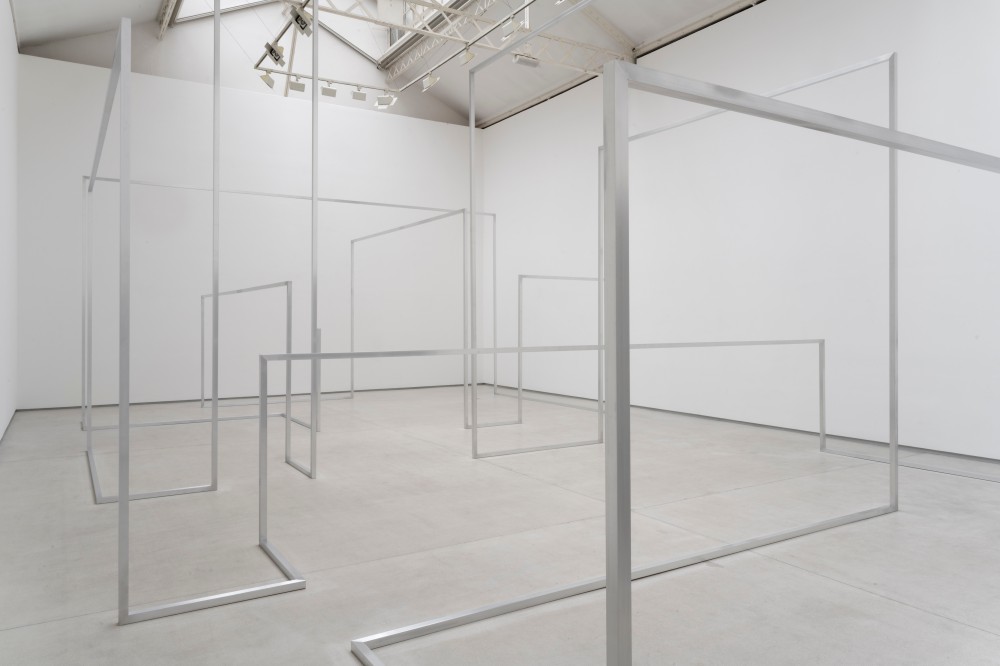 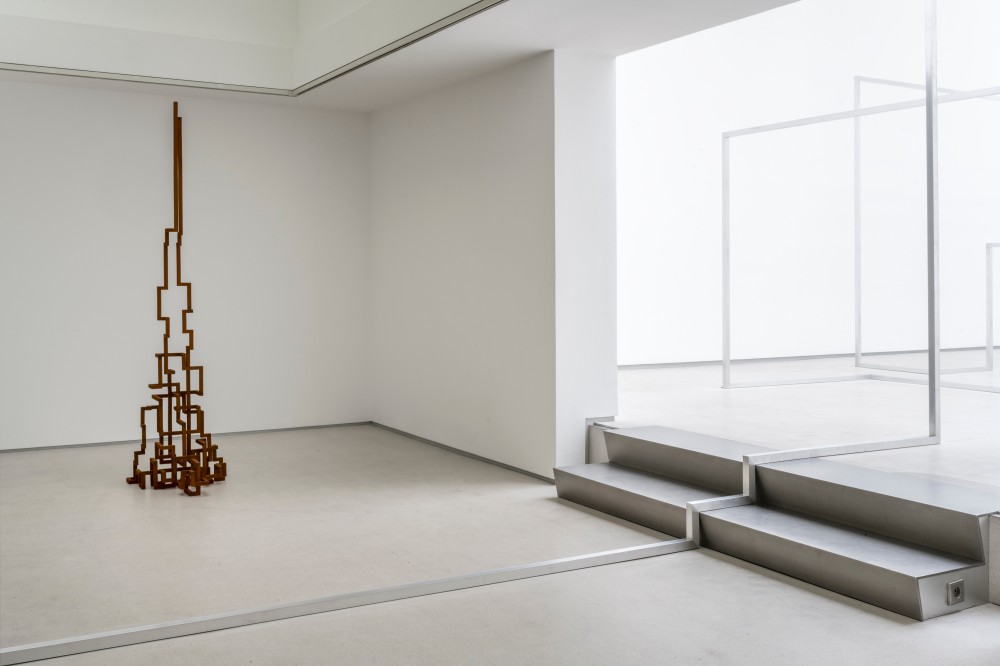 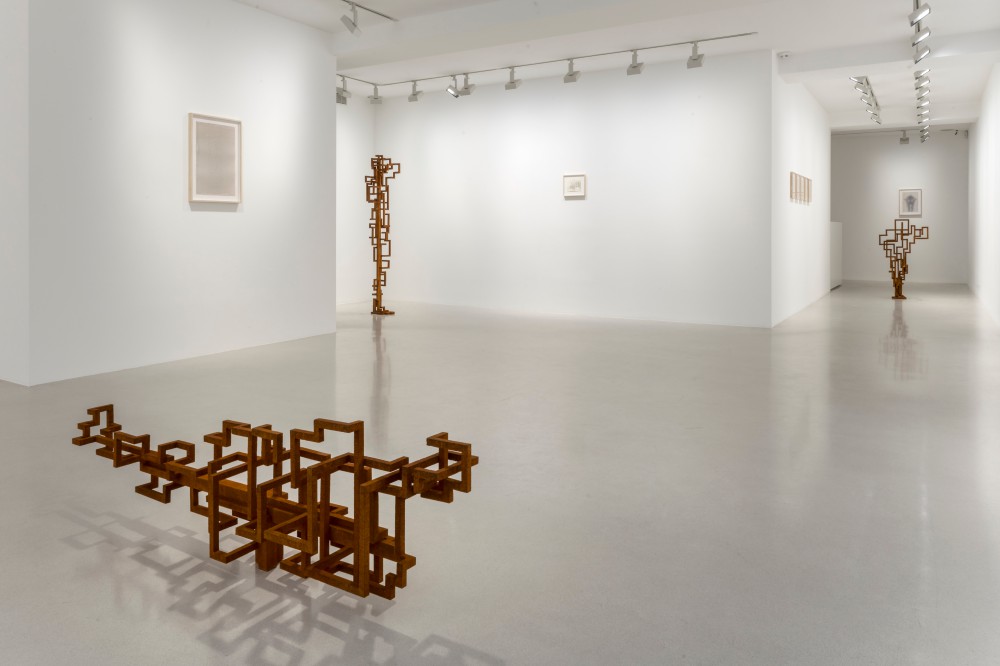 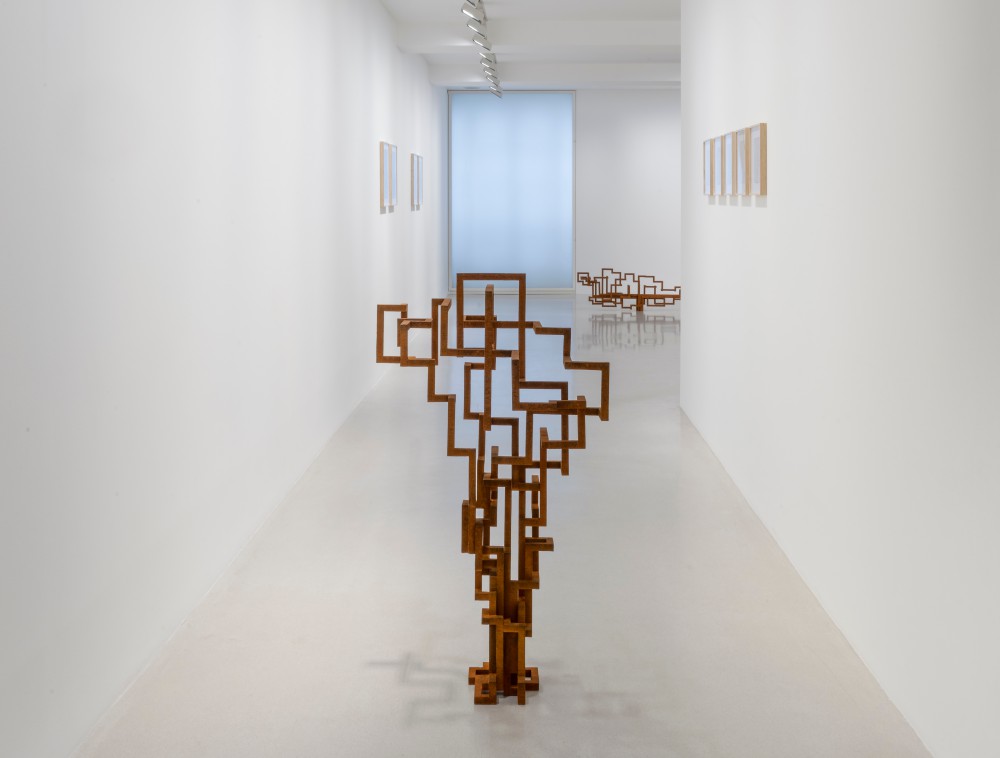 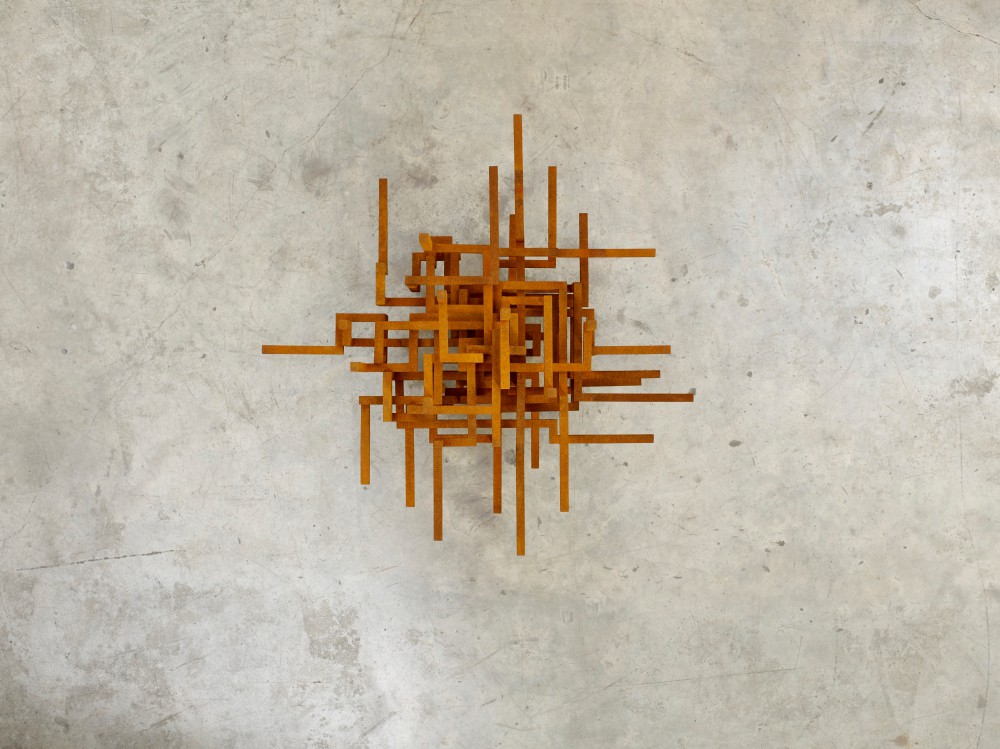 Run II, the immersive central work in this exhibition, uses the simplest means to activate and energise space, to create awareness of the way we move about in our constructed habitat. Run II is a singular, continuous, square 40 x 40 mm aluminium tube that fills the space of the main gallery in snaking 90-degree turns, the horizontal sections recalling heights familiar to us in our built environment: chair or table, worktop or shelf, door or ceiling.

Run II runs freely through the gallery and, by stepping through the work, our bodies can recognise and be liberated from the effects of what the Japanese call the culture of the chair. Run II is, in Antony Gormley’s words, ‘a zone of reflexivity in which light, air, volume and your displaced biomass are all tuned by the orthogonal yet free play’. By encouraging you to be a figure in a ground, you become the viewed for other viewers and, in doing so, can use the space of art as an emergent field. Gormley invites us to pause and consider our dependency on this second habitat – the ‘body of architecture’ – and to create an awareness of the ground itself, to ‘earth’ you.

In his essay for the exhibition catalogue, art historian Jon Wood writes: ‘It is not difficult to see Run II as part of an important turning point for his sculpture… a turn from the body of the artist to that of the viewer. Run II also, it should be said, signals continuity: extending the reach of a larger sculptural project that, with the human body – both of the artist and the viewer – at its centre, has been gradually developing over the last forty years. It is this ongoing, investigative project that gives Gormley’s work its unique and important place within the history of sculpture… More is now asked of viewers of Gormley’s work. They are asked to be more proactive and participatory – to dig deeper, you might say. Invitations to move, look and feel coincide with invitations to interpret and decipher: to read the work as well as sense it, and to enter into its realm physically and cerebrally, as much as emotionally.’

Alongside this new large-scale, site-specific work are several life-size cast iron ‘Liners’: single open lines, multiple lines and endless lines without beginning or end, that explore the internal volume of the human body, rather like the London Underground map. Like Run II, these works are seen by Gormley as ‘diagnostic instruments’ that attempt to re-locate you in your first habitat – your body. ‘I do not want to illustrate emotion or sensation, but these rusty maps might be helped by your projection of what it feels like to do a shoulder stand – Fill; lie on your side – Level; balance on your bottom while lifting your head and feet – Float; feel your relationship to the earth while balancing on your feet and clasping your legs as tight to the body as possible – Nest.’

Downstairs, a delicate ‘Framer’ entitled Rest, alludes to body space as architecture, and is accompanied by a selection of spatial drawings.

Gormley believes that sculpture in the digital age has a unique ability to return us to first-hand experience and to become a ground on which our forgotten internal perceptions of being in the world might return us to being in touch with ourselves and our home planet.

Antony Gormley, born in London in 1950, is widely acclaimed for his sculptures, installations and public artworks that investigate the relationship of the human body to space. His work has developed the potential opened up by sculpture since the 1960s through a critical engagement with both his own body and those of others in a way that confronts fundamental questions of where human beings stand in relation to nature and the cosmos. Gormley continually tries to identify the space of art as a place of becoming in which new behaviours, thoughts and feelings can arise.