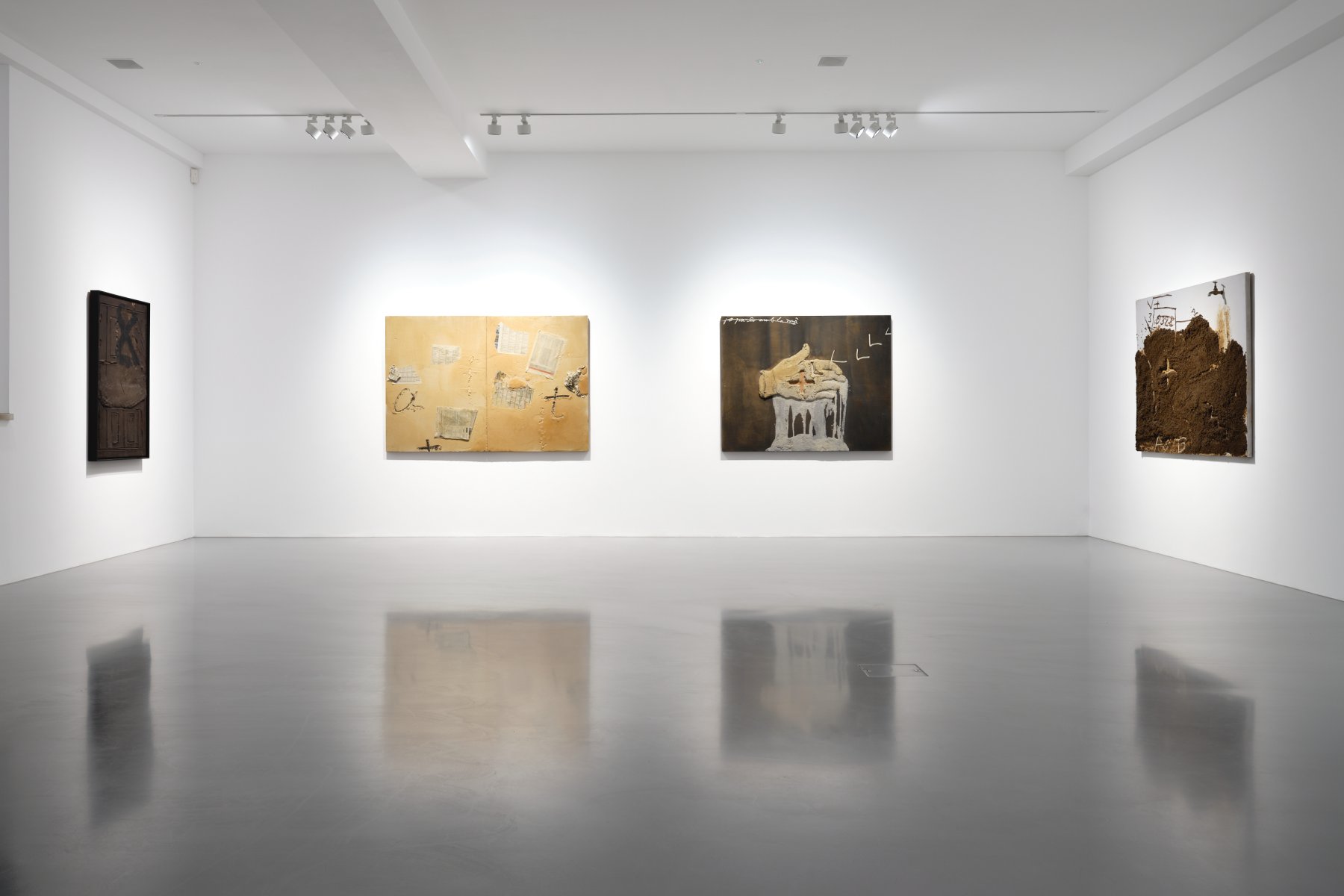 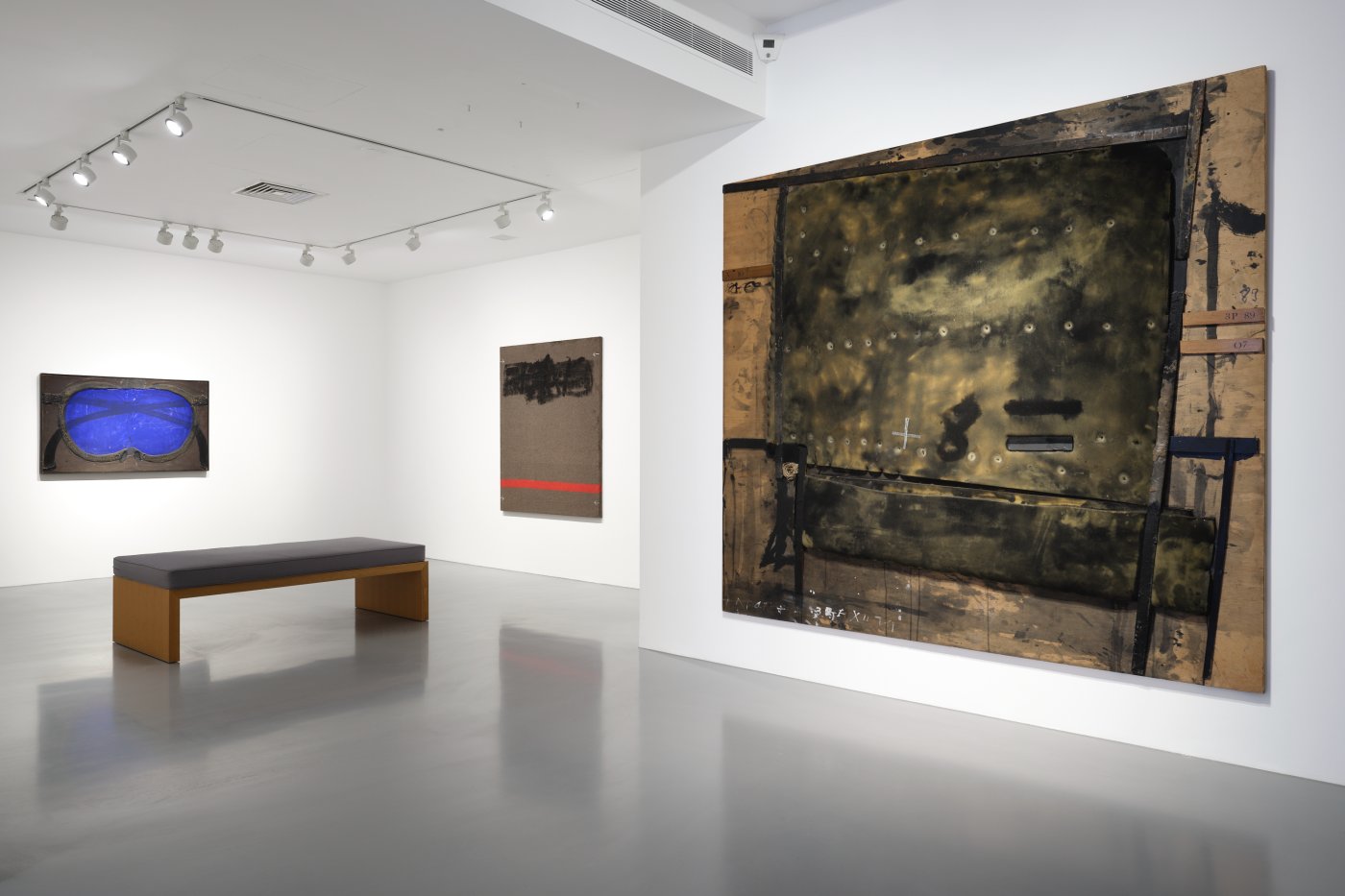 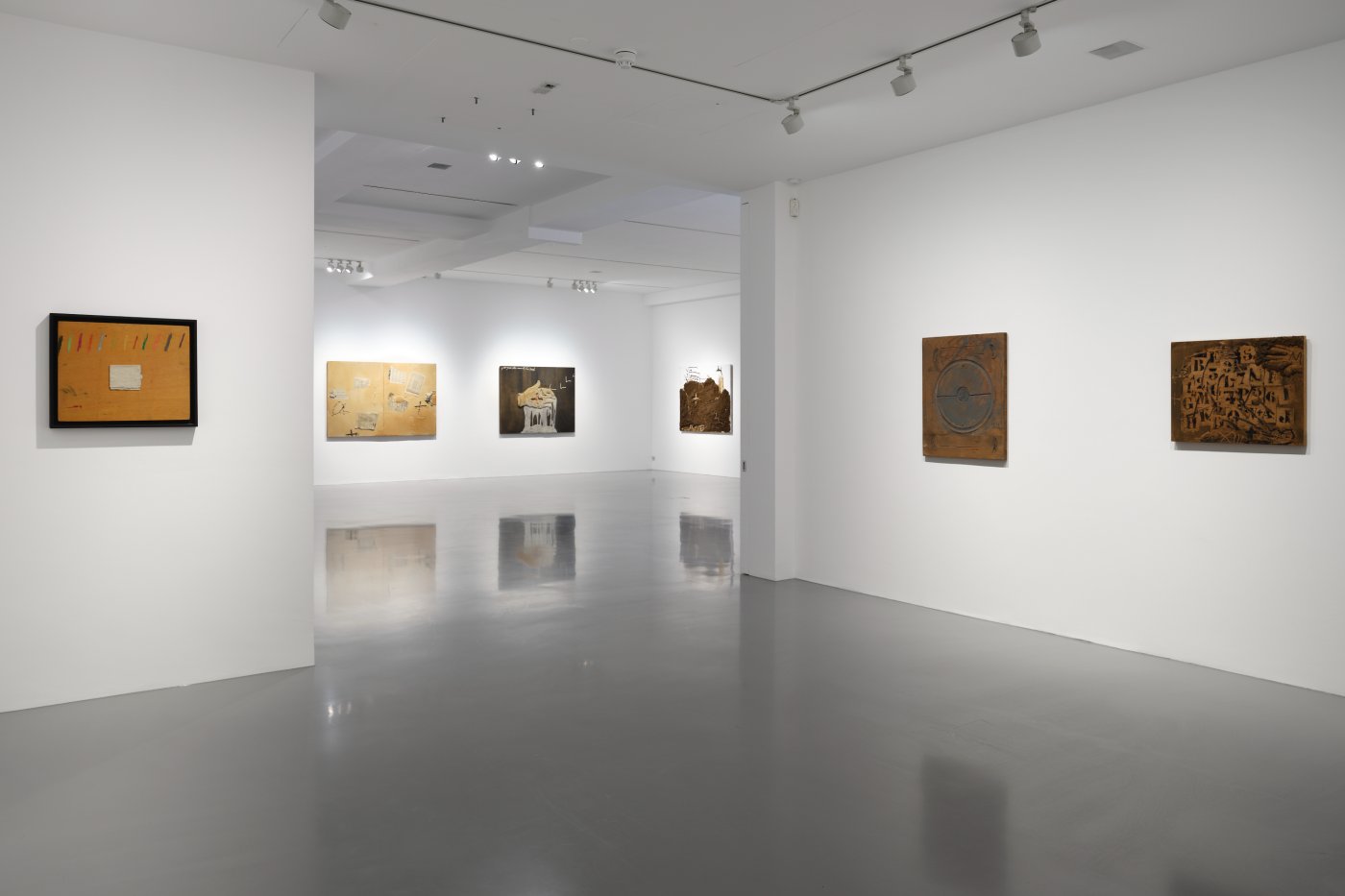 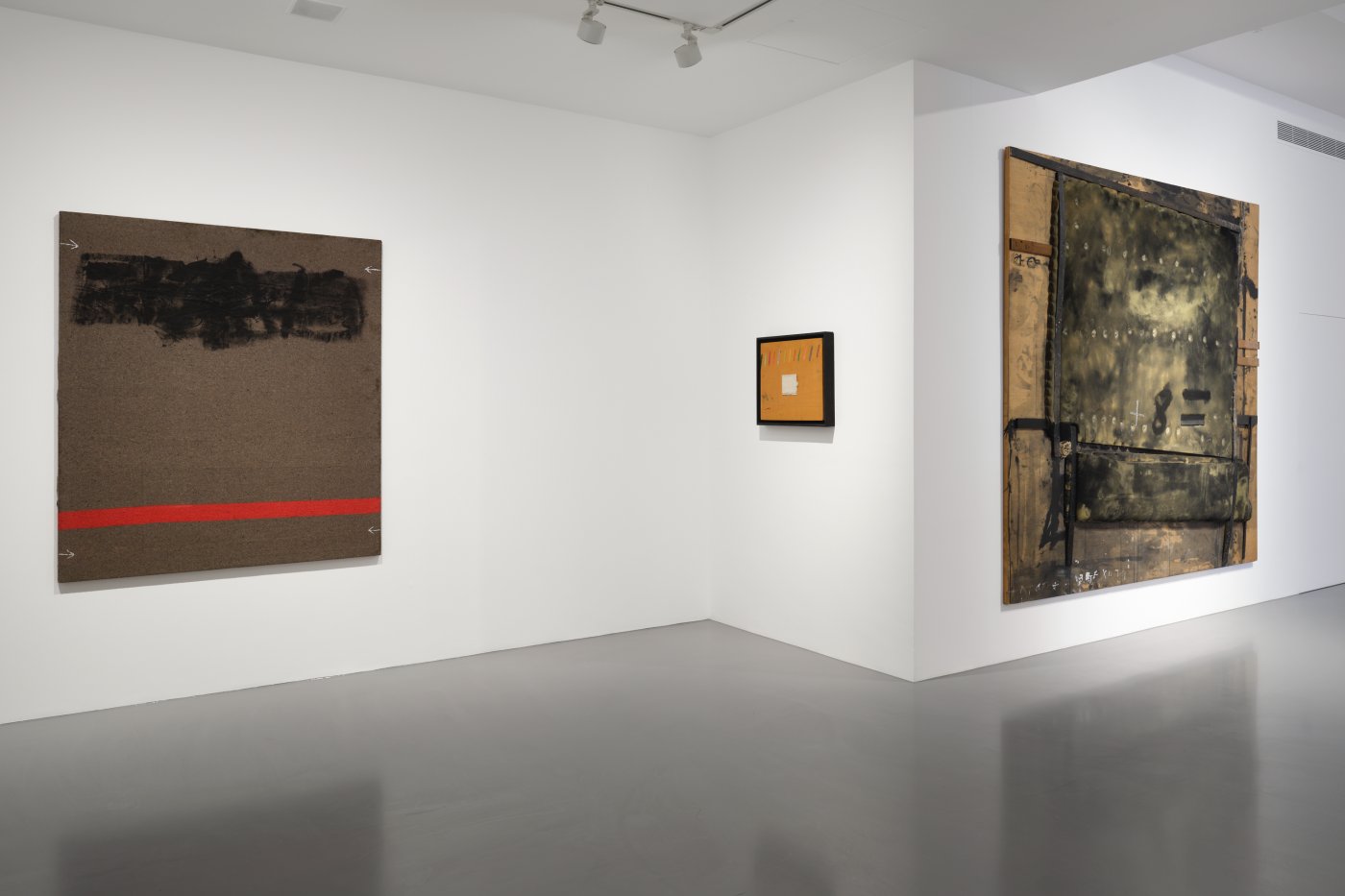 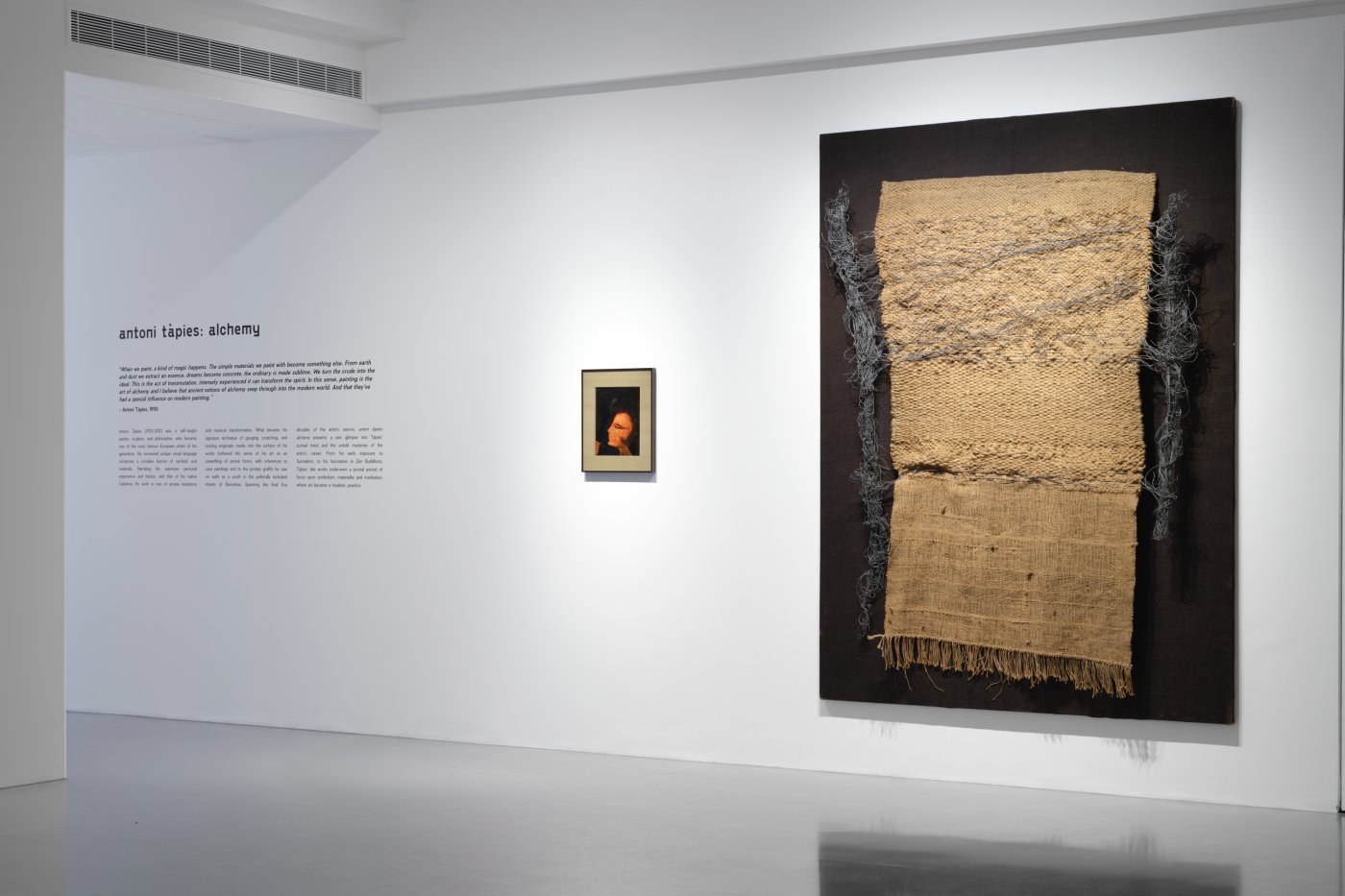 “When we paint, a kind of magic happens. The simple materials we paint with become something else. From earth and dust we extract an essence, dreams become concrete, the ordinary is made sublime. We turn the crude into the ideal. This is the act of transmutation, intensely experienced it can transform the spirit. In this sense, painting is the art of alchemy and I believe that ancient notions of alchemy seep through into the modern world. And that they’ve had a special influence on modern painting.”
– Antoni Tàpies, 1990

Antoni Tàpies (1923-2012) was a self-taught painter, sculptor, and philosopher, who became one of the most famous European artists of his generation. His renowned unique visual language comprises a complex lexicon of symbols and materials. Narrating his extensive personal experience and history, and that of his native Catalonia, his work is one of arcane resistance and mystical transformation. What became his signature technique of gouging, scratching, and incising enigmatic marks into the surface of his works furthered this sense of his art as an unearthing of primal forms, with references to cave paintings and to the protest graffiti he saw on walls as a youth in the politically turbulent streets of Barcelona.

Spanning the final five decades of the artist’s oeuvre, antoni tàpies: alchemy presents a rare glimpse into Tàpies’ surreal mind and the untold mysteries of the artist’s career with 14 large-scale paintings, created between 1952 and 2009. From his early exposure to Surrealism, to his fascination in Zen Buddhism, Tàpies’ late works underwent a pivotal period of focus upon symbolism, materiality and meditation, where art became a ritualistic practice.

During the last decades of his life, Tàpies fully embraced his ultimate strive – the transformation of the substance, from familiar into unfamiliar, profound to transient. By playing with formlessness and the incorporation of countless fractures, stains, incisions, stabs and gauges, Tàpies invites the audience to partake in a mystical language.

Concurrently, Pace Gallery is presenting an exhibition of works by Tàpies at its New York gallery from September 16th to October 22nd 2022. The presentation, titled Antoni Tàpies: Transmaterial, will showcase some 20 paintings created by Tàpies between the 1990s and early 2000s—Pace has represented the artist for 30 years, and almost all the works in this show were created after Tàpies joined the gallery. The exhibition is curated by Natasha Hébert, the artist’s daughter-in-law.

Antoni Tàpies’ works are part of numerous public and private collections including MoMA, New York; Tate Modern, London, Galleria Nazionale d’Arte Moderna, Rome; Centre Georges Pompidou, Paris; Stedelijk Museum, Amsterdam; and Museum of Contemporary Art, Los Angeles. Following his first solo exhibition in Barcelona in 1950 and his first American solo shows in 1953, Tàpies represented his native Spain for the Venice Biennale of 1958 and 1993. In 1984, he founded the Tàpies Foundation, which houses the artist’s archives and over 2,000 works. The Foundation continues to foster the multidisciplinary study of modern and contemporary art to this day.