“Light gave life to my forms. Born from light, it is natural that they should return to light and rely on it for their very existence. Light weaves through the copper wires, makes my non-shaped shapes come alive. It defines them, determines them, and at the same time, diffuses them.”
Antonella Zazzera

On the occasion of the Paris Gallery Weekend 2019, the gallery presents a new solo exhibition of the Italian artist Antonella Zazzera, whose work is also on display until June 28 in the exhibition TISSAGE TRESSAGE quand la sculpture défile à Paris ! in the Espace Monte-Cristo Fondation at the Villa Datris in Paris. 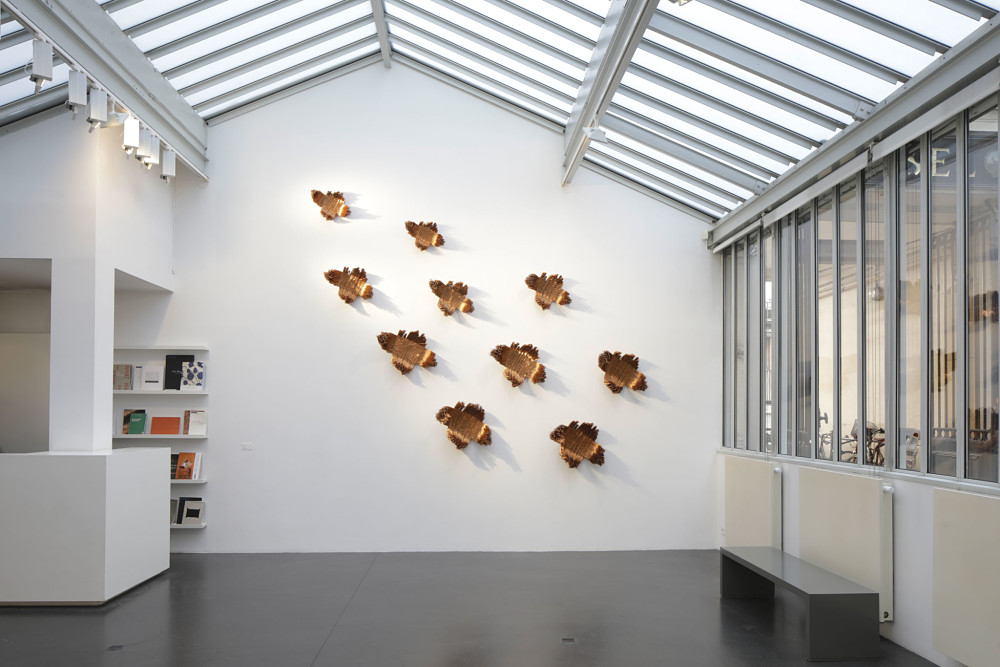 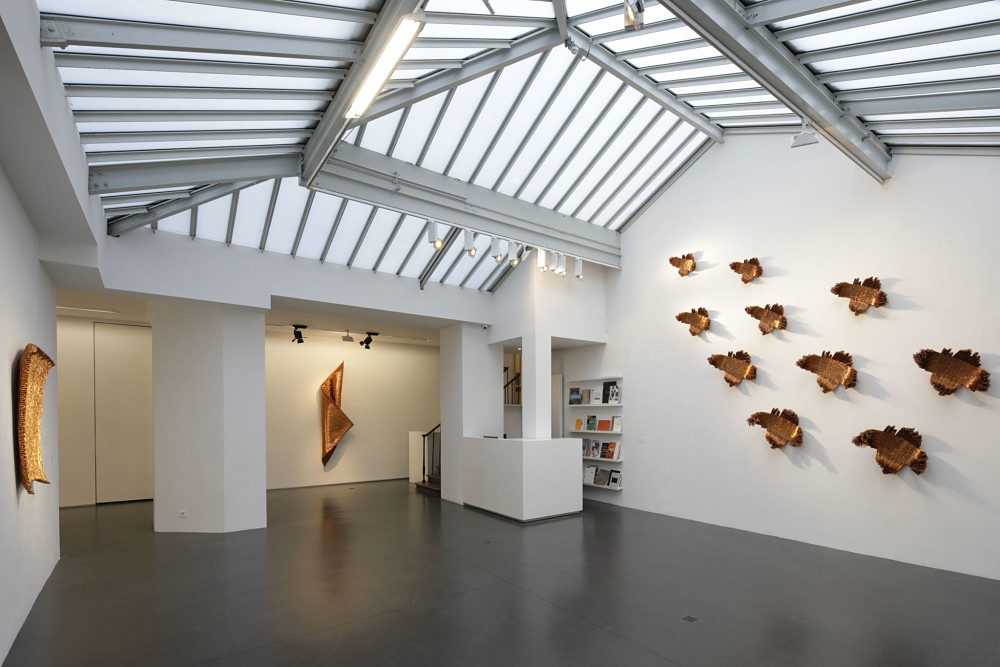 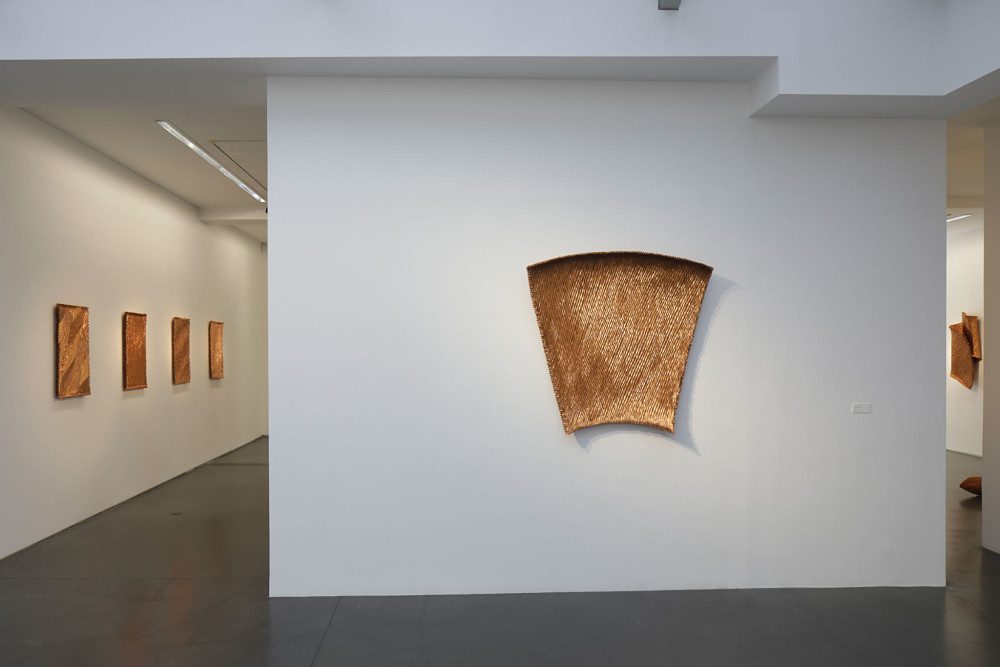 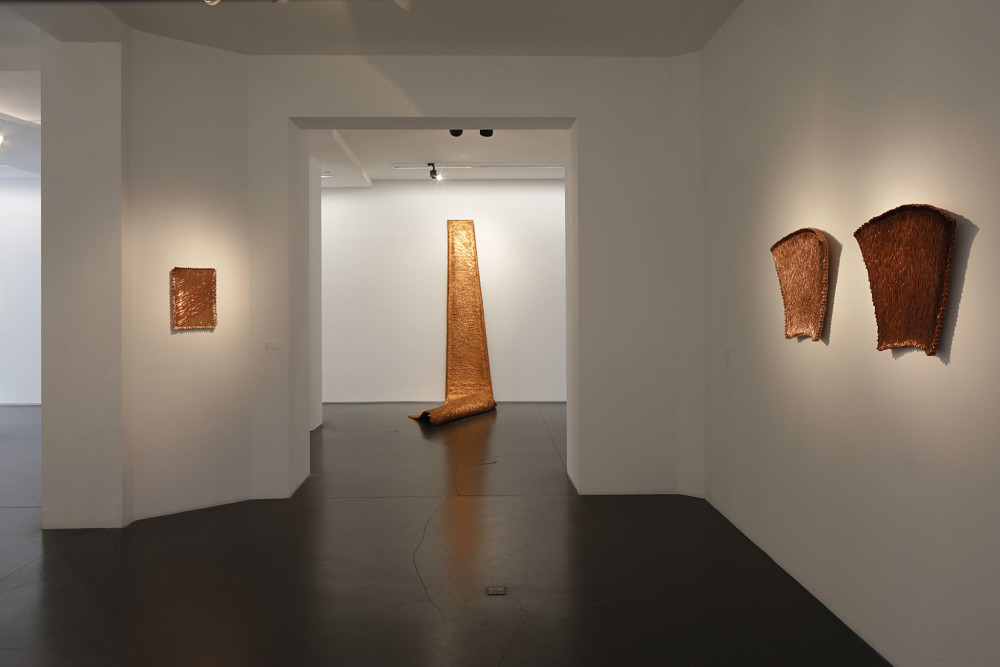 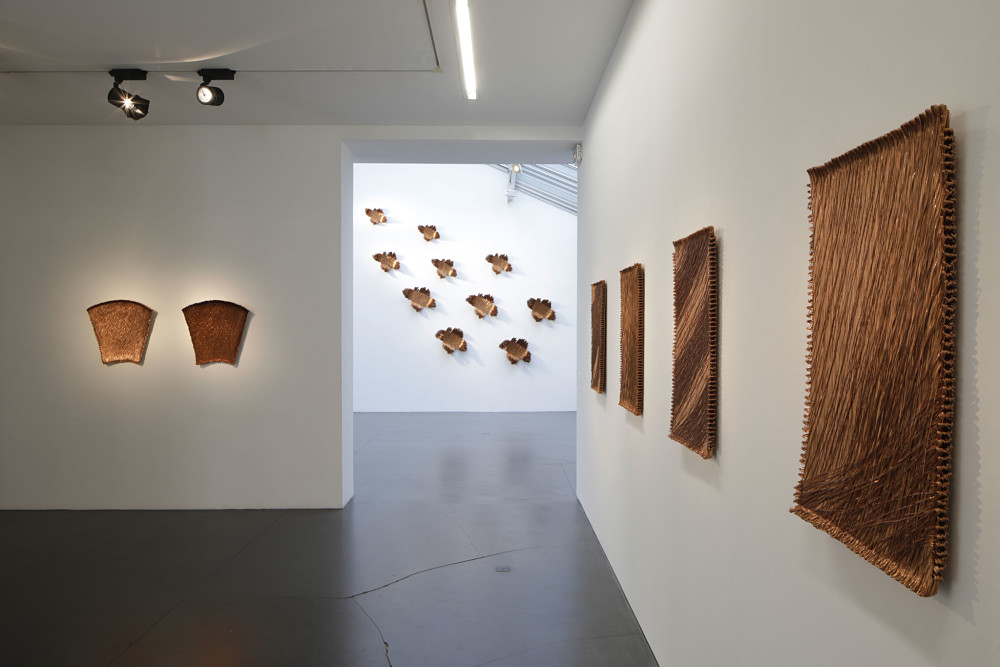 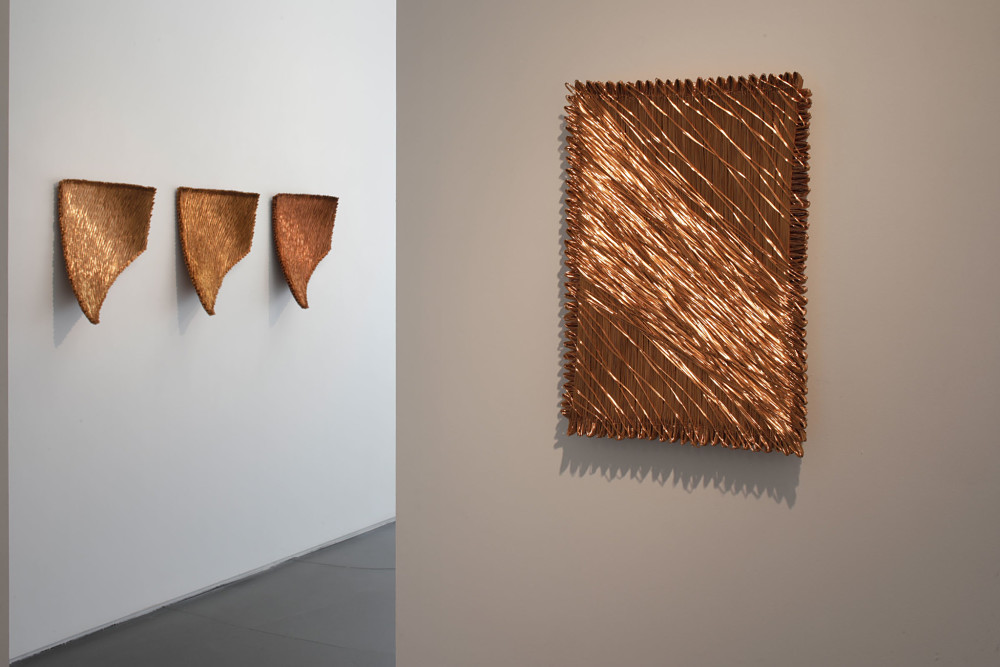 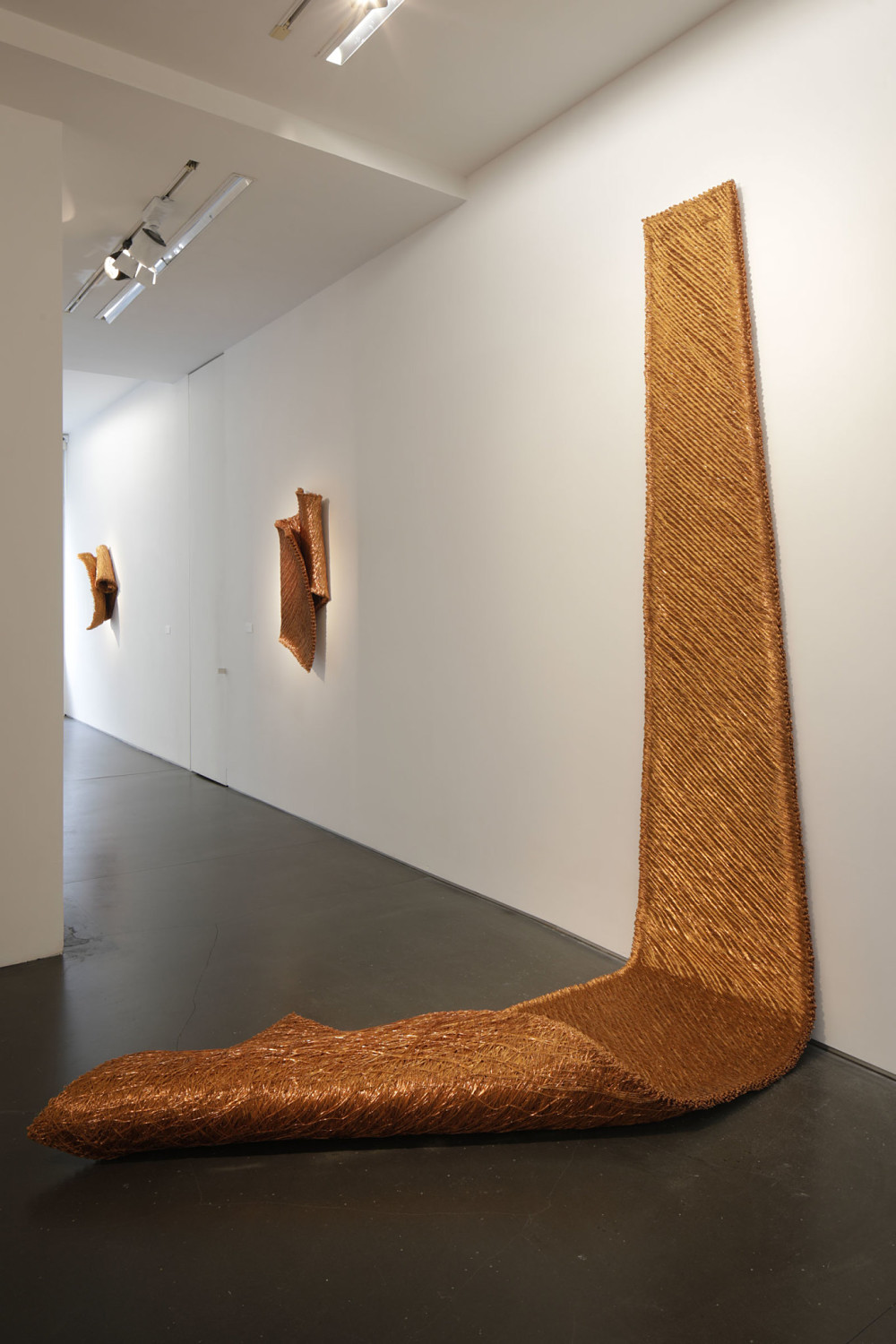 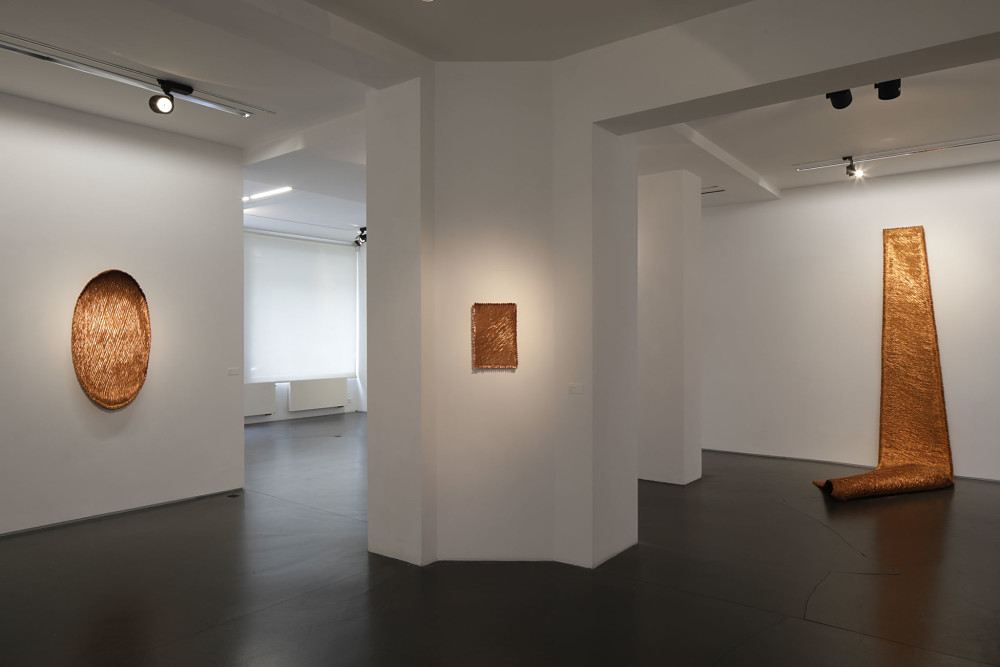 Antonella Zazzera was born in Umbria in 1976 and attended the Academy of Fine Arts of Perugia, from which she graduated in 1999. Passionate about chiaroscuro and its capacity to model forms across light, she began by making numerous pencil copies of the paintings of Caravaggio. Her first important works from the end of the 1990s are her three-dimensional Rilievi. They are constructed either of layers of sedimented gesso notched onto a wooden base which lay out the space, time, and gestures of the artist, or as in the Moduli, of gesso affixed to gauze strips to observe moving bodies and imperceptible energy vibrations. In the Madre-Matrice she inscribed her Segnotraccia (Signs-Traces), which, like her own body, seem to emerge from the Earth and trace the lines of her “Self” far and wide in their own artistic material. Then came a singular artistic experiment which became the basis of all her subsequent sculptural work. At the beginning of the 2000s, Zazzera engraved her lines onto a Vetronite metal plate, two thin copper sheets joined by a layer of glass dust, and then photographed them. When she developed her photographs she noticed that the reflections and refractions that had penetrated the copper had given birth to a kind of tri-dimensional material, touched by light. Thus was born her sculpture, that she then developed with its connecting thread: copper.

More than any other material, she says, light is the basis of her sculpture, that she creates while “thinking of painting and its innumerable tones,” all of which she finds in copper. Zazzera continually weaves the thread of her sculpture with her hands, trying to feel, almost blindly, almost instinctively, the harmonious point where her copper wire will be inserted, make a knot, and go off in another direction. Her sculptures are composed of a thread of wires ordered according to a very specific set of practices, creating a metallic framework where light is caught and reflected. She builds a studded frame which outlines the form around which her precious metal, with orange, brown, or red hues, will shape itself, with a ritualistic and bloody back-and-forth between the various points of the pattern creating life. In stratum after stratum, the sculpture becomes heavier, time does its work, and sedimentation takes effect. The artist patiently crosses the stitches, playing on the variations of shapes and colors, the thickness of the wires, and the vibrations triggered by the multiplication of the lines. The framework thus created becomes a receptacle of universal strengths.

It is important to bear in mind that Antonella Zazzera works in her grandparents’ farm, in the countryside of Umbria. The weaving and braiding of her copper sculpture are reminiscent of the thick, smooth hairs of a horse’s back, the light in the honeycombs of beehives, plowed earth and the copper hues of its furrows, the inside of a wooden tree trunk that reveals its own coppery tones, the convolutions of the alveoli of a perfectly laid-out sunflower, bird nests for which Mother Nature takes back the leftovers of the copper wires, that birds use to build their own nests in her Naturalia. In all her work, light provides the fundamental key to its space and shape.

Among the artistic references that come to mind when viewing Zazzera’s current work, one could quote the studies on light of the futurist Giacomo Balla, the research on sedimentation of Piero Dorazio, the felt sculptures of the American Robert Morris, the sign language of Hans Hartung, and the labyrinthic spaces of Vieira da Silva.

In 2014 the gallery Jeanne Bucher Jaeger devoted a first solo show to Zazzera, Trames de lumière, presenting her work to the French public for the first time. Her work has been exhibited in numerous group exhibitions in Europe, in Japan, in Israel, and the United States (the Frederik Meijer Gardens & Sculpture Park, Grand Rapids, Michigan, 2014). In 2016, she won the Arnaldo Pomodoro prize for sculpture, after Loris Cecchini, Laura Renna and Claire Morgan.

This new exhibition displays the artist’s latest works, among which are her Quadri, in which she weaves, spectacularly, the painted gesture on a canvas, or plays with variations on shape and colors, the thickness of the wires, and their vibrations, to produce high-voltage sculptures in which light runs on material so as to make all its energy vibrate.