For many years Richard Billingham has been recording his experience of landscape; his own home landscape and lands far afield; daytime, night-time, rural and suburban landscapes; natural, artificial, wet and dry, hot and cold landscapes. 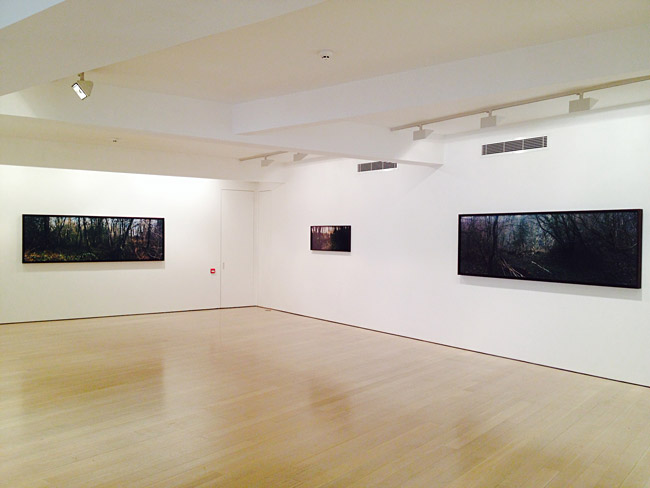 It’s a relationship that parallels his exploration of all the moods and complexities of his family life. It is both an inextricable part of those relationships and a distancing from them, an intimate correspondence but one that allows a reflective space.

Billingham is a master of pictorial composition; this is an instinctive ability that is apparent throughout his work, whether in the first, more spontaneous images from Ray’s A Laugh, the distressingly hypnotic video and still work on animals in captivity (Zoo) or the considered, almost meditative conversations with the natural environment in his more recent landscapes. Billingham always set out to make beautiful pictures. Talking about those early works he will refer to the angle of a curtain, an echo of a pattern, a triangular organization, the importance of a particular play of light – the subject is not enough; it has to be enriched to reveal its potential and it is that compositional skill and focus that gives the work its inevitability and strength.

Billingham’s first foray into landscape was in the sub-urban, Black Country hinterland of Cradley Heath, the landscape of his upbringing. These still, absent images are in stark contrast to the cacophonic pictures of his family interiors. Having stepped outside, from 2001-2003 he travelled extensively in the UK, Europe, Ethiopia and Pakistan, trips that resulted in a collection of stunning landscape images, many on a large scale (Richard Billingham, Landscapes 2001-2003, Dewi Lewis Publishing, 2008).

Billingham’s relationship with the panoramic image dates back more than a decade. A residency at Artsway in the New Forest in 2003 led to the production of a series of landscape photographs amongst which were a nine part panorama of a cliff top land/sea boundary on the South coast, and a remarkable twilight video, panning in slow motion across a wind-stirred silhouette of quivering trees – it’s a silent piece but you can hear it. A few years later, Billingham’s continual experimentation with the photographic potential of differing qualities of equipment and film stock led him to cheap throwaway panoramic cameras. With this unpromising technology, he made a series of work in Norfolk and Suffolk – Constable Country – which has a seductive, timeless quality. These works were made on a small scale (the negative quality would allow little else) and this added to their exquisite, ‘vintage’ nature. From East Anglia, Billingham turned to the South Downs and then on to Wales and the Gower peninsula. Several of the works from these groups are included in the current exhibition.

Having moved to Swansea, Billingham’s landscape work took on a different dimension, his intense engagement with the panoramic image reflecting his familiarity with his environment. Almost all the larger images in this exhibition originate in the South Wales landscape. These large panoramas are magisterial. Nevertheless, they demonstrate a curiosity in the detail that makes up the whole; once again, it is the telling intensity of observation that transforms a thicket into a painting. For the allover compositional control of these images render them closer to painting. Billingham often refers to his initial exploration of photography as a source of subject matter for painting and it is as a photographic artist with an acute sensitivity to painting that he succeeds in producing such significant work.

Billingham’s panoramas, including the video installation Sweep, were recently exhibited at the Towner Art Gallery, Eastbourne. Anthony Reynolds Gallery and Annely Juda Fine Art saw an opportunity to collaborate in presenting the exhibition in London. The juxtaposition with an exhibition of large-scale iPad prints of the landscape by David Hockney could not be more apposite and will provide for an intriguing conversation. Two artists, both with a profound relationship with their familiar landscape, both sharing a fascination for the potential of their chosen technology, both unarguably intent on producing beautiful images; but with what different results.

This is the first exhibition in a series Anthony Reynolds Gallery plans to stage in different host venues in London and elsewhere. Intended as an interim programme anticipating the relocation of the gallery, it is hoped that such collaborations will remain part of the gallery’s activities in the future.