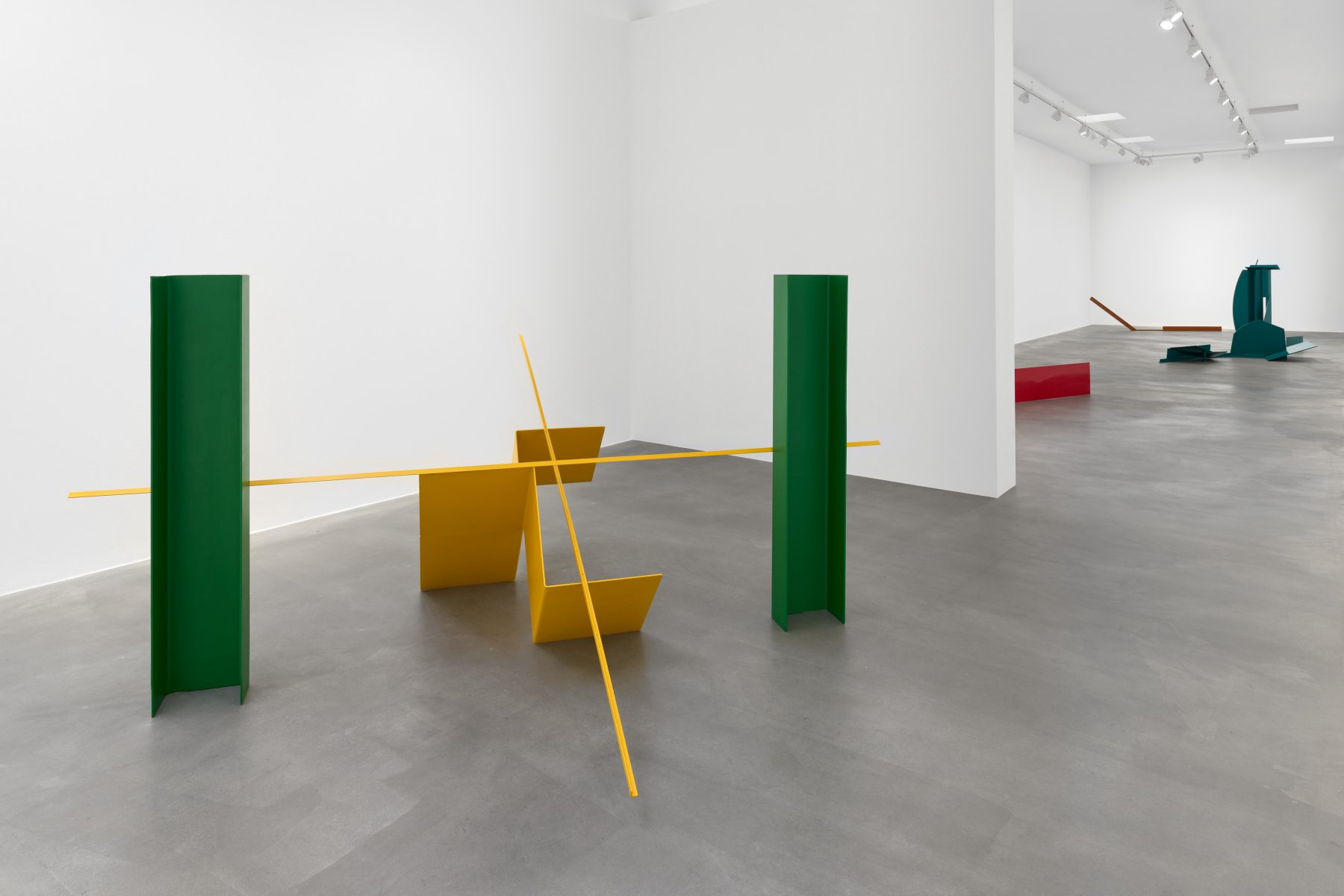 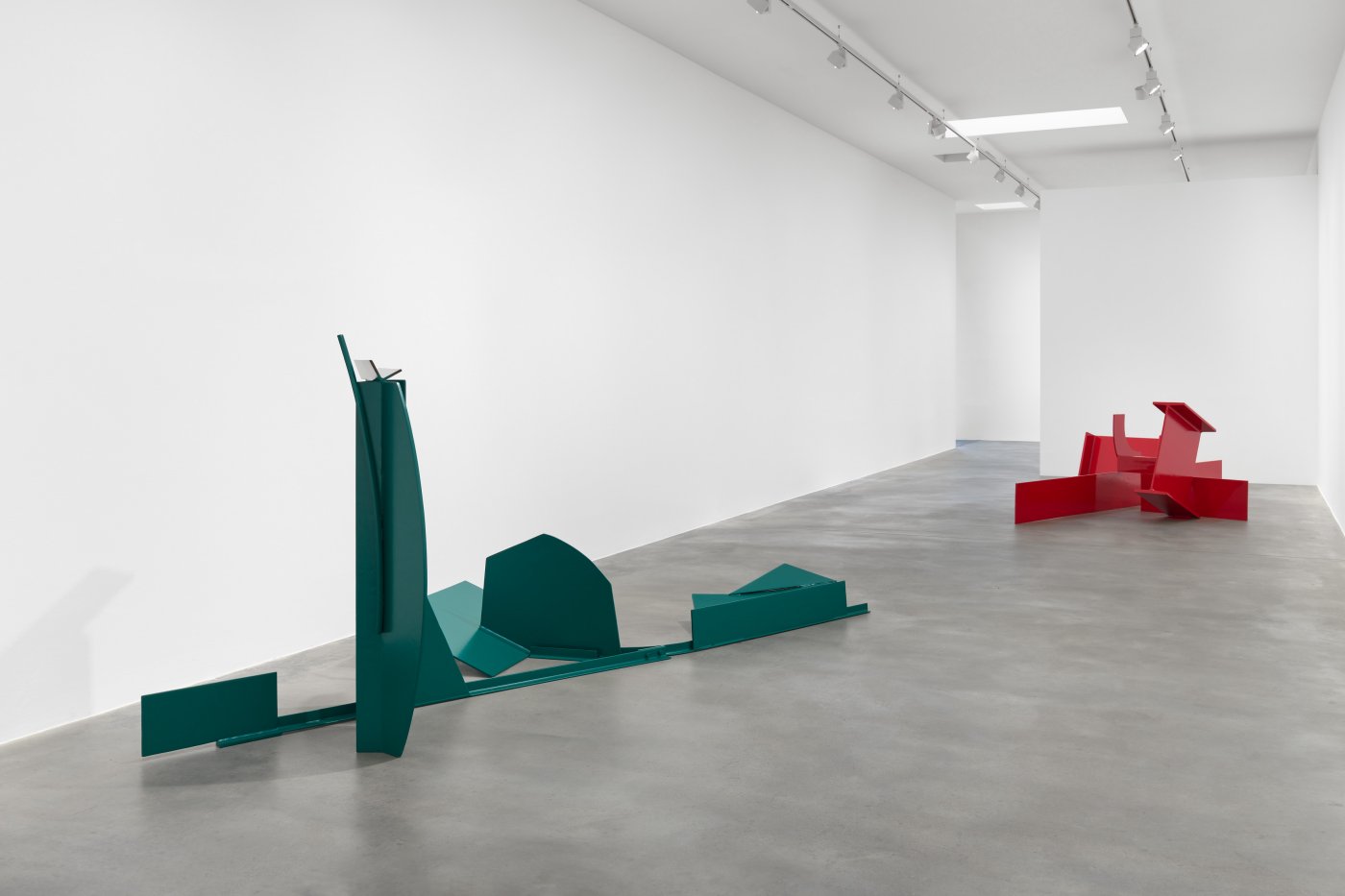 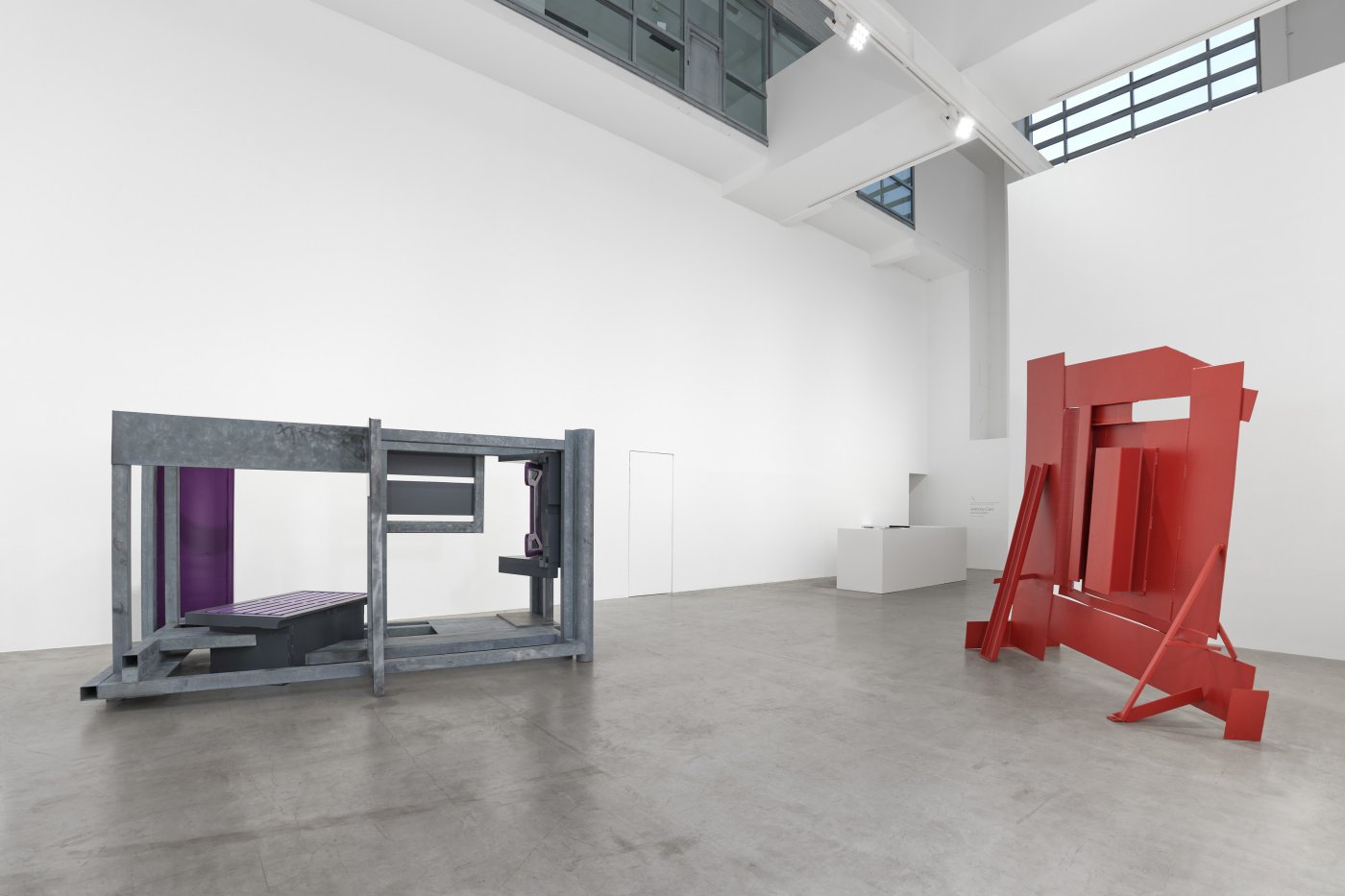 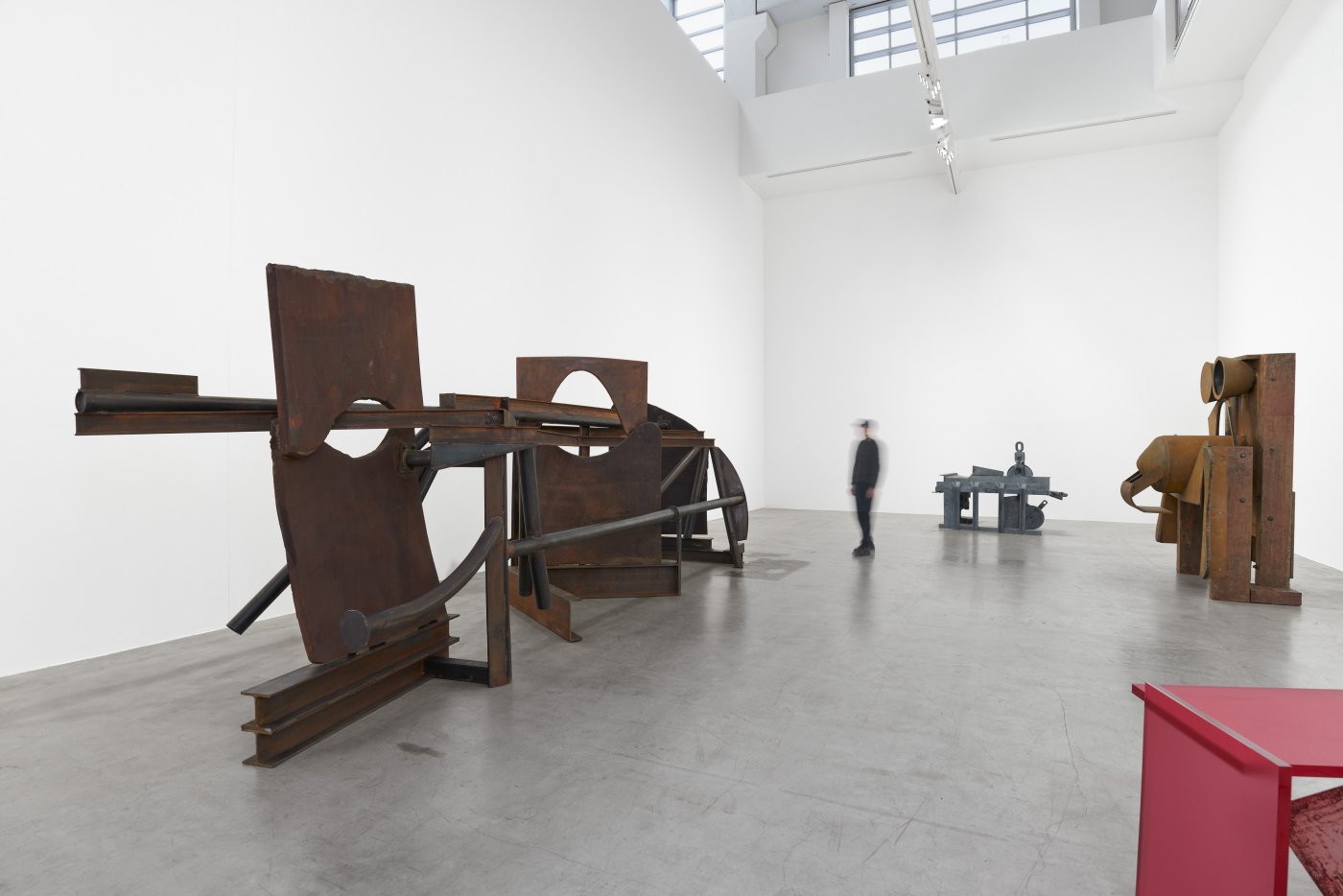 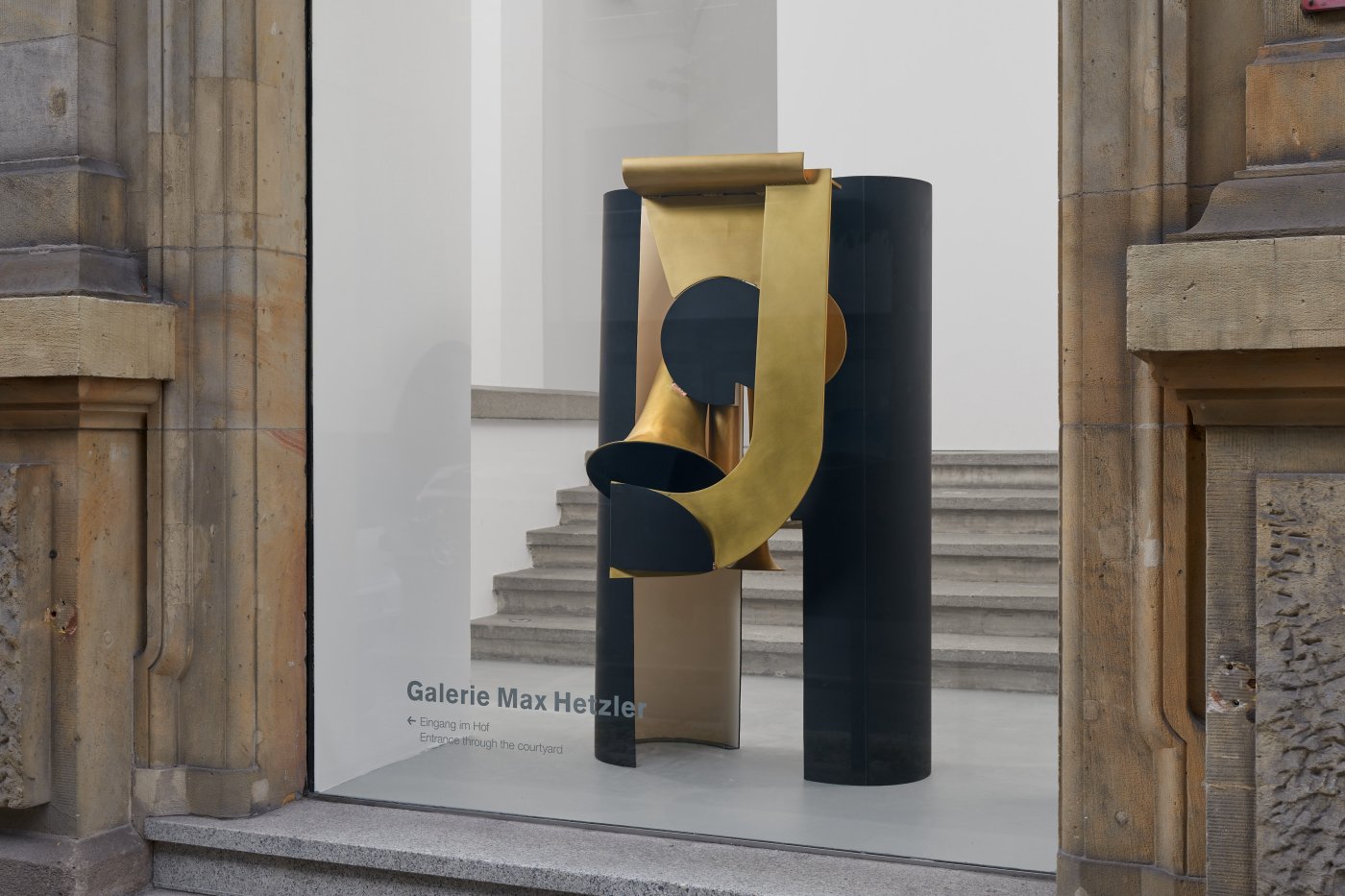 Over the course of six decades, Anthony Caro became internationally known as the preeminent British sculptor of his generation. He believed that it was the role of the artist to keep culture moving, resulting in an ever-evolving oeuvre, which saw the artist’s late work as surprising and fresh as his early abstract sculptures.

After a successful early career during the 1950s, Caro abandoned his figurative way of working, which he found limiting, and began making abstract sculptures in welded or bolted painted industrial steel, in the 1960s. This was inspired by a life-changing journey to the USA in 1959, where Caro met the sculptor David Smith, as well as painters such as Kenneth Noland and Helen Frankenthaler, among other New York and West Coast artists. These innovative works by Caro were placed directly on the ground, dispensing with the convention of presenting sculptures on plinths. They confronted the viewer immediately, producing a one-to-one encounter between viewer and object, which in turn supported Caro’s argument that sculpture is about the feeling of the body in space.

This exhibition presents 19 sculptures, in tandem with relief paper sculptures and additional figurative works on paper from the 1950s. These are followed up chronologically by the early, very light, almost weightless, abstract sculptures in painted industrial steel of the 1960s and 1970s. Also on show are the heavier and more voluminous, enclosing steel works of the 1980s and 1990s, as well as late works, which do not so much present solid forms in space, but rather create spaces that can be inhabited visually. Large free-standing sculptures are complemented by so-called ‘Table Pieces’, which Caro created throughout his career and in parallel to the large works. The climax of the exhibition is formed by one of his last sculptures Terminus, 2013, from the Perspex series.

During the first decades of his abstract work, Caro used a studio in the small garage at the side of his house. This enclosed space defined the scale of his sculptures, as Caro used the whole extent of the room, working very close to – almost within – the structures, and was only able to step back and view the works from afar once they were moved out of the studio. Caro had to rely on his instinct and his intelligence as an artist and interact closely with the metal. In addition to their bright colours, the works’ evocative titles instilled a sense of joy, which had until then been mostly absent from earlier modernist sculpture associated with the so-called ‘Geometry of Fear’ in the 1950s. Works like First National, 1964, There, 1966, London, 1966, or Larry’s Land, 1970, attest to this.

In his quest to move sculpture forward, Caro sought new challenges, namely a different treatment of body and mass, whereby space was articulated in flat planes, as seen in Rondo, 1966–1976, or enclosed within curved shapes, as in Black Russian, 1984–1985. In addition to the inspiration of classical Greek sculpture, which he admired at the Parthenon, he was fascinated by Renaissance painting by Giotto and Duccio, as well as Modern artists, such as Cézanne and Picasso, with the latter’s work providing inspiration for Emma That, 1977. Music was also an important influence, clearly materialising in sculptures such as Oratorio, 1991–1992 and Up A Note, 2008–2009.

Caro’s fascination with architectural references grew and led to works which literally enclose space, throughout the 1980s and 1990s. For the viewer, who is unable to enter them, they carry a sense of something contained, reversing the open, linear forms seen in Caro’s earlier polychrome works. These later sculptures resemble shrines, closed-in on themselves. The logical next step was to create contained spaces which can actually be entered. By this point, Caro had become interested in working on an even larger scale. Still concerned with the body, his works from this period were less about what it feels like to occupy a body, but rather what the body feels like in relation to the sculptures, as can be seen in works such as Park Avenue Series: Morning Shadows, 2011– 2012.

The exhibition has been curated by Paul Moorhouse, Chief Executive of the Anthony Caro Centre London, who said: ‘During the 1960s, Anthony Caro redefined what sculpture was and – most importantly – could be. The exhibition at Galerie Max Hetzler reveals that, during a career that extended over six decades, Caro remained a restless innovator and, even in his late work, he continued to probe the boundaries of sculpture.’