Annely Juda Fine Art presents an exhibition of works by Sir Anthony Caro, spanning seven decades of his career including early pieces from the 1950s through to his last works in 2013. 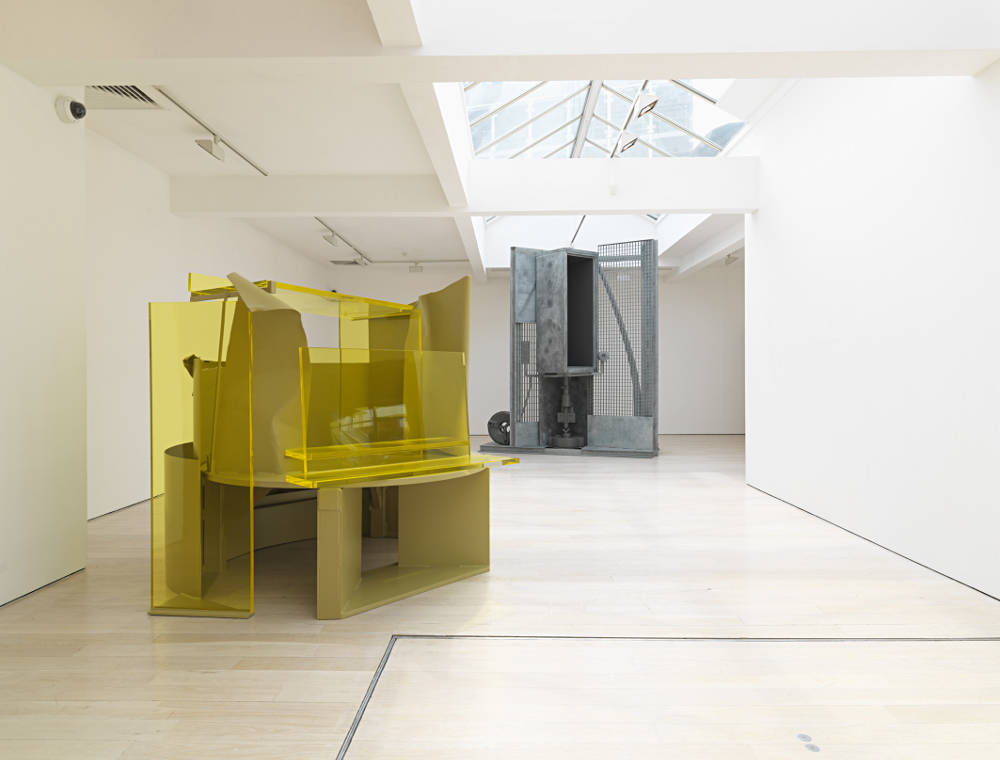 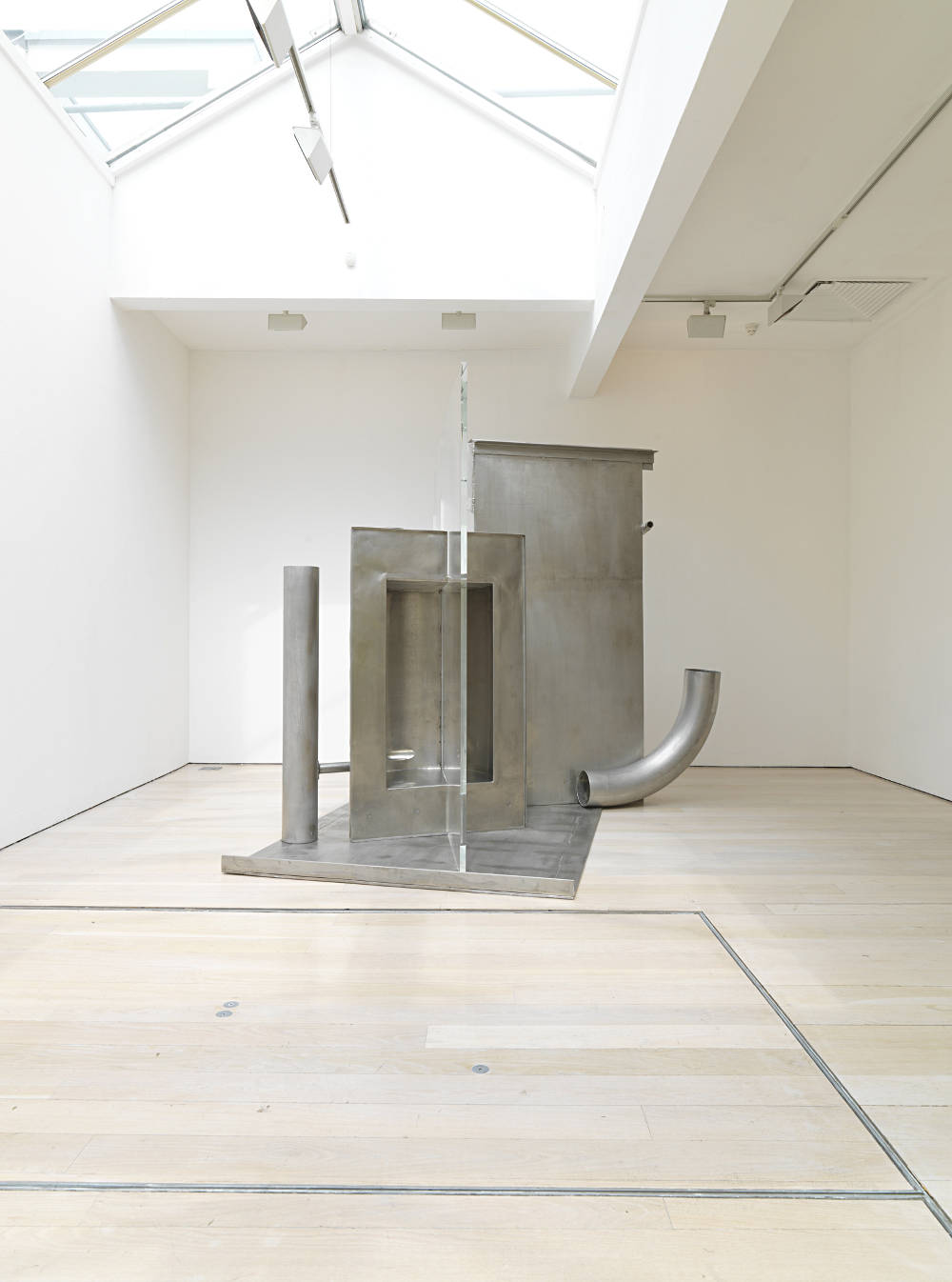 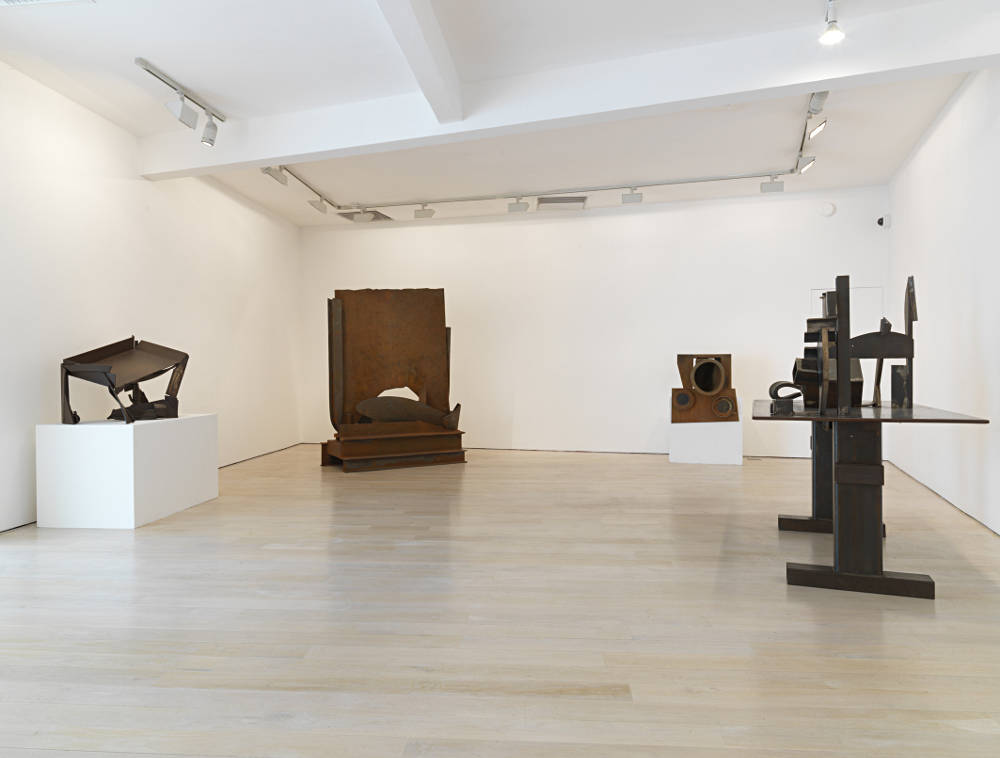 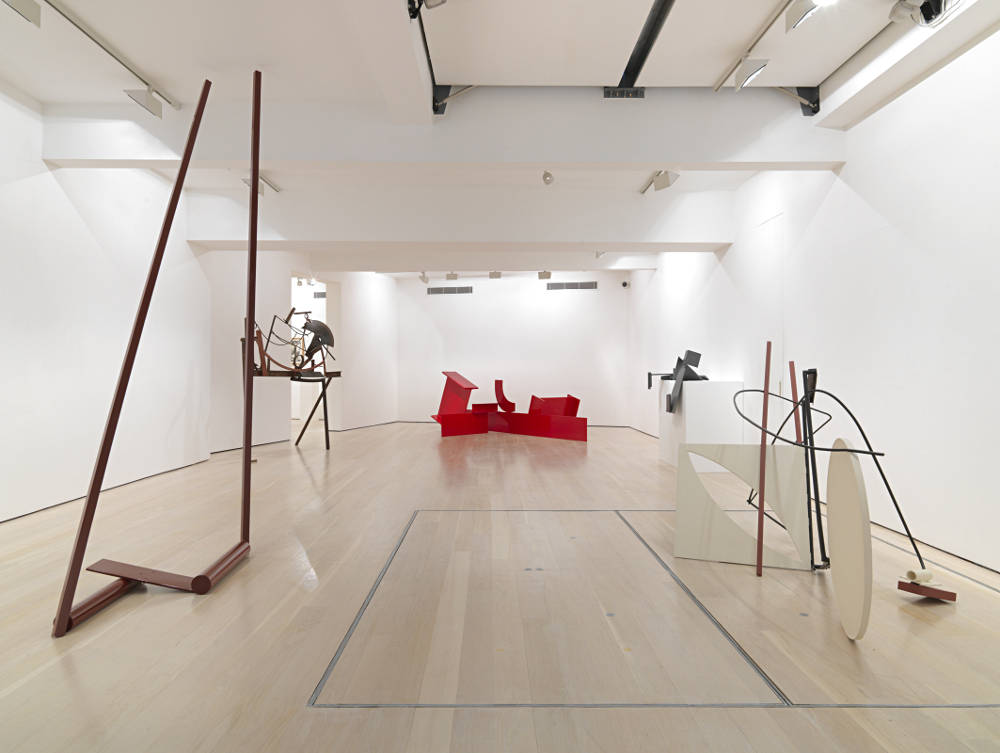 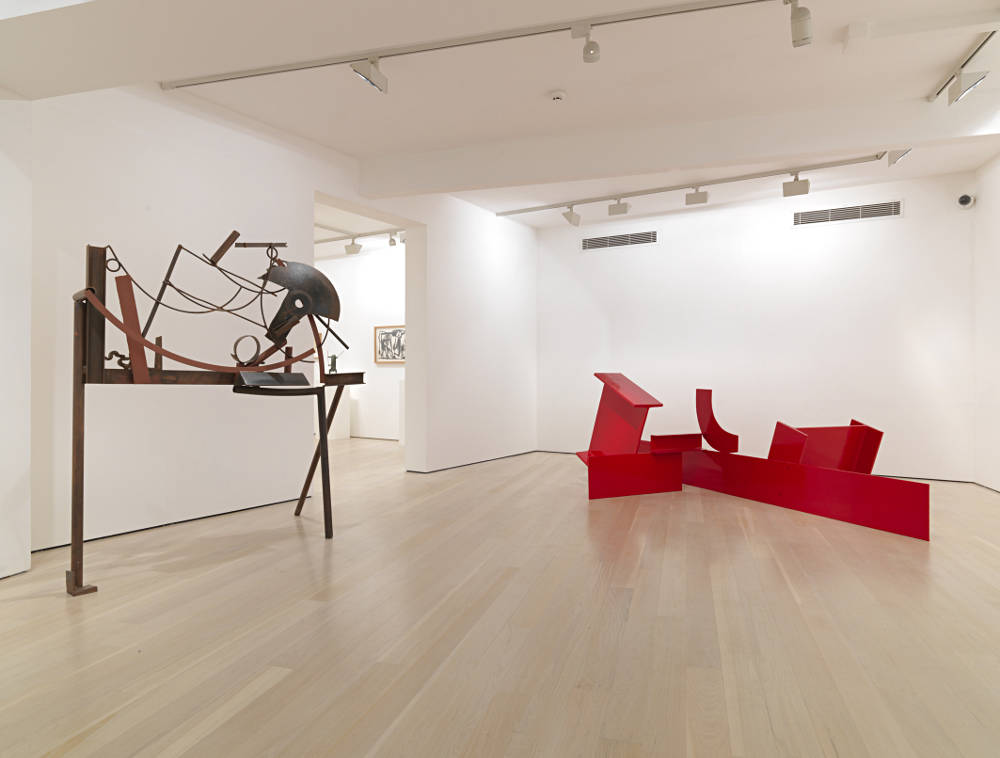 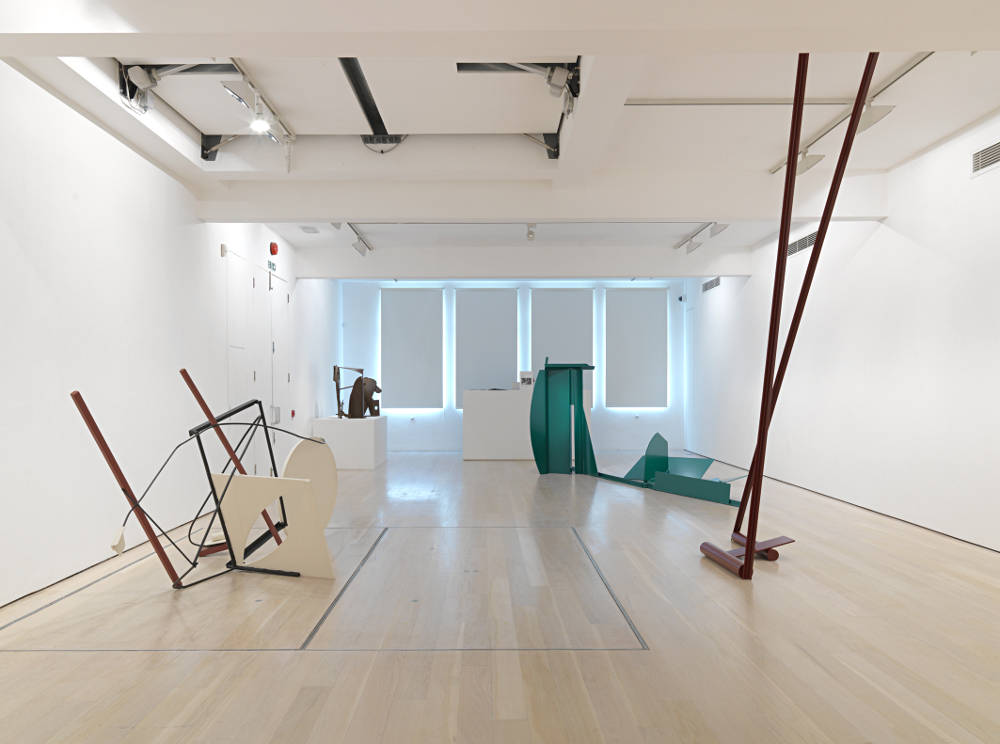 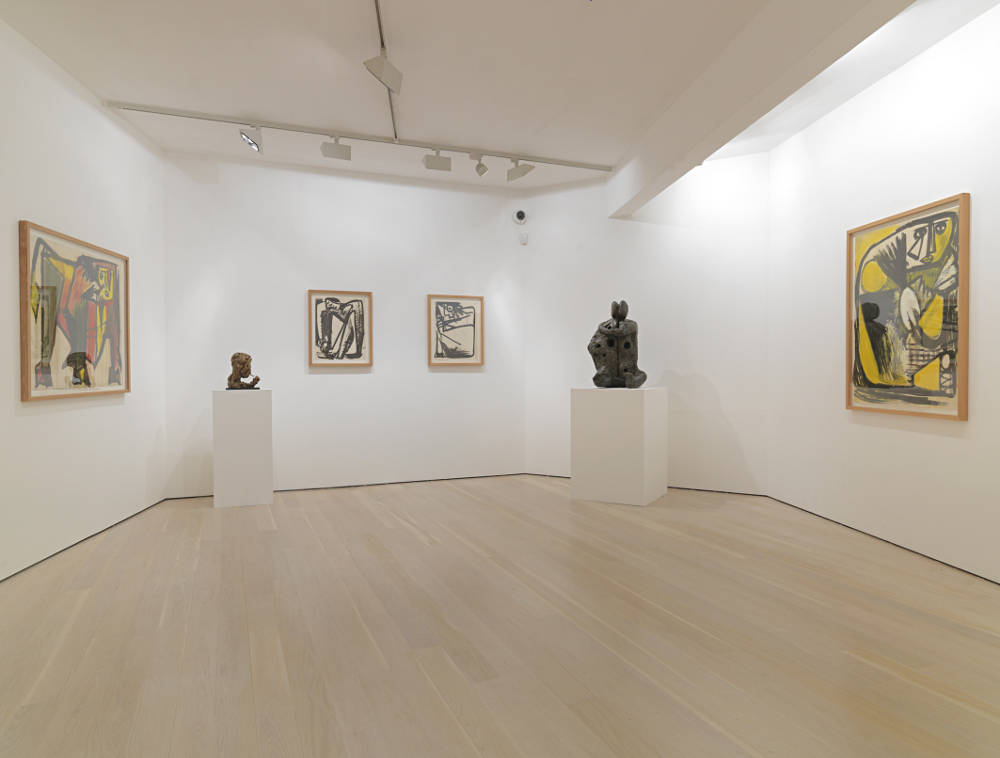 Born in Surrey in 1924, Caro – having studied at the Royal Academy, London from 1947-52 – started working as an assistant to Henry Moore, who shaped his early understanding of sculpture by introducing him to modern art and a ‘whole new world of non-academic art’.[1]

In the 1950s, Caro’s work was dominated by bronze figurative sculptures but by the early 1960s a dramatic change in direction emerged. Caro decided to make the innovative move to place his sculptures off the plinth and onto the floor. This was marked by his ground-breaking exhibition at the Whitechapel Gallery in 1963 of large brightly painted abstract sculptures positioned directly on the ground, which had never been done before. While his interest in exploring sculpture’s interaction with the human form remains a central theme in these works, he continued to move increasingly towards abstraction and the use of new materials, surfaces and techniques.

Caro began to use steel after a visit to New York in the 1960s left him with a sense of needing to experiment and ‘do something different’. Caro remarked: ‘Clement Greenberg, the art critic, said to me, “If you want to change your art, change your habits”, so I thought, well, let’s do something completely different, and it was that, that made me go down to the docks and buy some steel.’[2]

Through the 1970s and 1980s Caro continued constructing works from steel and experimenting with painted surfaces. His Table Pieces of this time continued to challenge the restrictions of the plinth further by hanging off the edge or reaching all the way to the floor. Additionally, in the 1990s his works began to involve the assemblage of different combinations of steel components with found industrial objects being recognisable as part of the sculptures.

Although he continued to worked extensively in steel, in the 2000s and 2010s Caro also continued to explore and experiment and his works included a diverse range of other materials, including bronze, silver, lead, stoneware, wood and in his last sculptures, coloured Perspex.

Anthony Caro is often regarded as the greatest British sculptor of his generation and has played a pivotal role in the development of twentieth-century sculpture. His teaching at St Martin’s School of Art in London from 1953 to 1981 was very influential. He questioned assumptions about form, material and subject matter in sculpture and his work inspired a whole younger generation of British sculptors. The exhibition is accompanied by a catalogue with an essay by Dieter Schwarz, former Director of Kunstmuseum Winterthur.

A selection of large outdoor sculptures by Anthony Caro will be shown at the Cliveden National Trust from May to November 2019 in collaboration with Blain Southern Gallery and an exhibition of Caro’s works will be on display at Norwich University of the Arts from May to July 2019.

Anthony Caro: Born in Surrey in 1924 • Studied Sculpture at the Royal Academy, London from 1947–52 • Married the artist Sheila Girling in 1949 • Started working as an assistant to Henry Moore in 1951 • Started teaching at St. Martin’s School of Art, London in 1951 until 1981 • First solo exhibition at Galleria del Naviglio, Milan in 1956 •Groundbreakng solo exhibition at Whitechapel Gallery, London in 1963• Retrospective at the Hayward Gallery, London in 1969 • Retrospective at Museum of Modern Art, New York in 1975 • Received his knighthood in 1987 • Received the Order of Merit in May 2000 • Died 23 October 2013 in London