David Zwirner presents an exhibition of work by Anni Albers at the gallery’s 537 West 20th Street location in New York. Organized by Brenda Danilowitz, Chief Curator at The Josef and Anni Albers Foundation, this is Albers’s first solo exhibition in New York since her 2000 retrospective at The Jewish Museum.

Spanning the artist’s decades-long career, the works on view combine a deep and intuitive understanding of materials and process with her inventive and visually engaging exploration of form and color as a language in their own right.

Following recent showings of her work in Europe at the Guggenheim Museum Bilbao in 2017 and the widely acclaimed 2018–2019 retrospective at the Kunstsammlung Nordrhein-Westfalen, Düsseldorf, and Tate Modern, London, and coinciding with the centennial anniversary of the founding of the Bauhaus, this exhibition will provide American audiences with a rare opportunity to experience the breadth of Albers’s body of work.

The exhibition will focus primarily on the works Albers made following her move to the United States in 1933, including her pioneering wall hangings, weavings, public commissions, and a range of her works on paper. On view will be one rarely seen cotton and silk wall hanging from prior to this period, made in 1924 during Albers’s time at the Bauhaus, that manifests an intricate relationship between warp and weft and reveals the beginning of her engagement with weaving as a “many-sided practice.” Subsequent works including With Verticals (1946)—one of Albers’s largest weavings—are even more complex in their composition, utilizing ordered but irregular patterning that is of a high degree of difficulty to achieve on a loom. Likewise, in Black-White-Gold I and Black-White-Gold II (both 1950)—reunited here for the first time since the 1950s—Albers uses a supplemental thread to mimic the look of embroidery and create an intricate pattern akin to a kind of handwriting. On loan from the Wadsworth Atheneum Museum of Art, Hartford, In Orbit (1957) is a prime example of Albers’s pictorial weavings of the 1950s, integrating circular forms reminiscent of planets or satellites within an otherwise geometrically regular composition. This work underscores the slippage between abstraction and figuration within Albers’s practice—her work both invokes the modernist grid while questioning its emphasis on formal reduction by presenting a composition that luminously shifts into three dimensions.

Motifs of threads, knots, triangles and geometric figures derived from them, recurring themes in Albers’s works across different mediums and time periods, are brought to light in the exhibition. It will include, as well, a group of never-before-exhibited photographs of Albers taken by her husband, Josef Albers, that offer a personal view of the artist. Presented alongside a group of Albers’s “handwriting” drawings, these works underscore Albers’s sustained commitment to visual communication in its many forms.

Over six decades that spanned the twentieth century, Anni Albers created a diverse body of work that ranged from seemingly modest pencil drawings to grand installations in landmark architectural environments. As a textile artist and designer whose sensibilities were formed at the Bauhaus in Germany, a crucible of European modernism in the 1920s and 1930s, Albers defined her art as a practice that was true to her time yet equal to the experimental and innovative example set by the ancient pre-Columbian weavers of Peru whom she named as her “great teachers.”

For Albers, weaving combined art, architecture, and engineering. Her quest was to devise ways for her materials—the threads themselves—to create the visual and textural action in her work. It was a process of building and a never-ending experiment with carefully chosen materials and often uncomplicated weave patterns like plain or twill weaves. As she expressed it in a 1968 interview “… like an architect has to concentrate on the functioning of a house, so I enjoyed concentrating on what [a] specific material demanded.”

A remarkable group of samples woven in 1948 as prototypes for textiles and shown in public for the first time in this exhibition are revelatory demonstrations of this process. Using transparent cellophane or gold metallic thread combined with natural jute, these small works conjure magical effects of light and surface events. They balance the demanding exactness of mathematical calculation intrinsic to the process of weaving with Albers’s remarkable powers of visualization, challenging her audience to look, and then look again, and again, in search of clues to the underlying patterns and organizational core of her constructions.

From these small masterpieces to the grand scale of one of her largest works, Camino Real (1968), seen for the first time outside Mexico City in this exhibition, Albers had a consummate sense of appropriateness and the courage to experiment with new materials and methods. To achieve the large size of Camino Real she enlisted Abacrome, a Manhattan company that fabricated appliquéd flags and banners for Pop artists like Robert Indiana, Richard Lindner, Roy Lichtenstein, Tom Wesselmann, and Claes Oldenburg in the 1960s. The results of this unlikely process pleased her so much that she adapted her original gouache drawing as the basis for an eponymous screenprint.

The exhibition highlights Albers’s brilliance and flair for working in permutations of scale and embracing materials and techniques ranging from her 1924 cotton and silk wall hanging made at the Bauhaus, through an array of handwoven textiles and pictorial weavings from the midcentury, to her later signature works on paper that include lithographs and screenprints, pencil sketches, ink and felt-pen drawings, and highly colored gouaches.

Influential designer, printmaker, and educator Anni Albers (née Annelise Fleischmann; 1899–1994) is considered the most important textile artist of the twentieth century. She studied weaving at the Bauhaus beginning in 1922, eventually joining the faculty in 1930. In 1933, Anni Albers and her husband Josef, invited to establish the art department at Black Mountain College, emigrated to North Carolina. There she elaborated on the technical innovations she devised at the Bauhaus, developing a specialized curriculum that integrated weaving and industrial design. It was during this time that Albers honed her writing skills and published now classic essays on weaving in her new language, English (collected as On Designing in 1959, reissued as Anni Albers: Selected Writings on Design in 2000). She and Josef began to avidly collect pre-Columbian art, including vessels, figures and textiles. In 1949, she became the first designer to have a one-person show at The Museum of Modern Art, New York; the exhibition Anni Albers: Textiles subsequently traveled to twenty-six venues throughout the United States and Canada. Following the Alberses’ move to New Haven, Connecticut, in 1950, Albers shifted her focus primarily to her workroom, spending the 1950s creating fabrics for commercial production (including a commission from Walter Gropius for Harvard University), writing, and further developing her “pictorial weavings,” culminating in the exhibition Anni Albers: Pictorial Weavings at the MIT New Gallery, Cambridge, Massachusetts, in 1959. The show traveled to Carnegie Institute of Technology, Pittsburgh; Baltimore Museum of Art; Yale University Art Gallery, New Haven; and Contemporary Arts Museum, Houston.

The artist’s seminal book On Weaving, published in 1965, helped to establish design studies as an area of academic and aesthetic inquiry and solidified her status as the single most influential textile artist of the twentieth century. It remains in print in a newly expanded edition issued in 2017.

Since May 2016, The Josef and Anni Albers Foundation has been exclusively represented by David Zwirner. 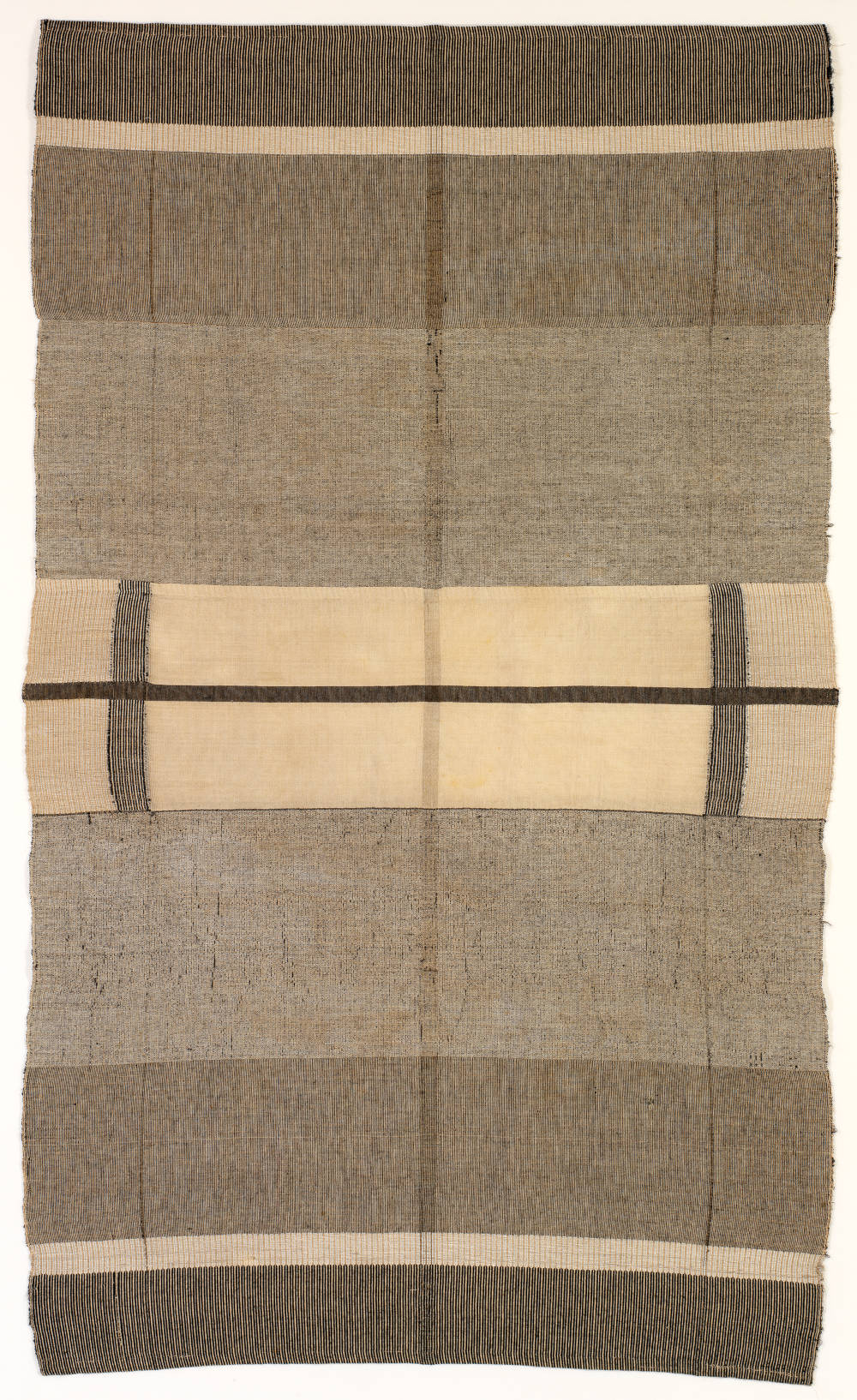