“I use myself as a model, because with myself I can go further than with anyone else”
– Annegret SOLTAU 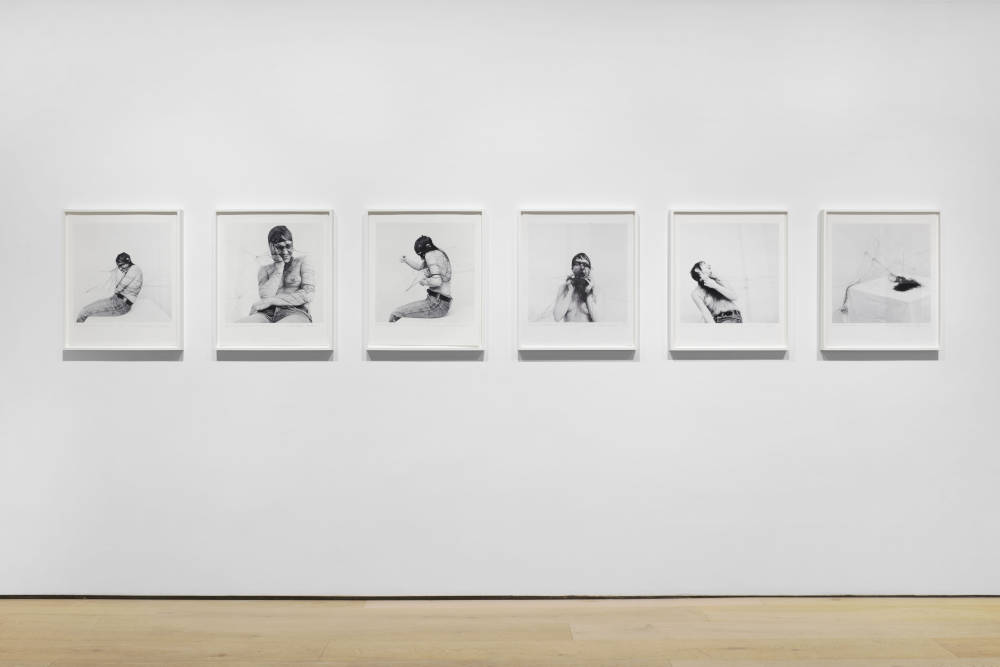 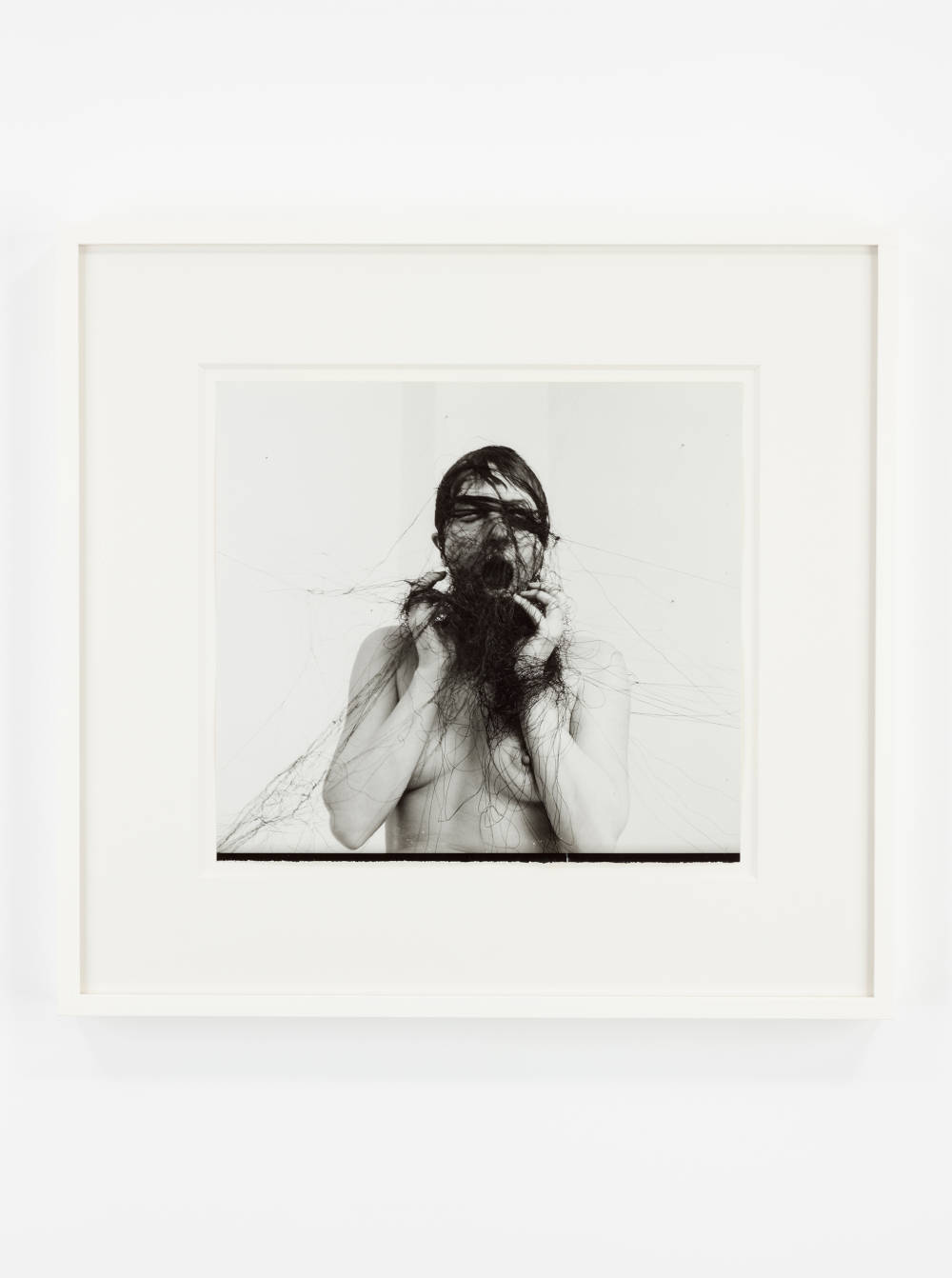 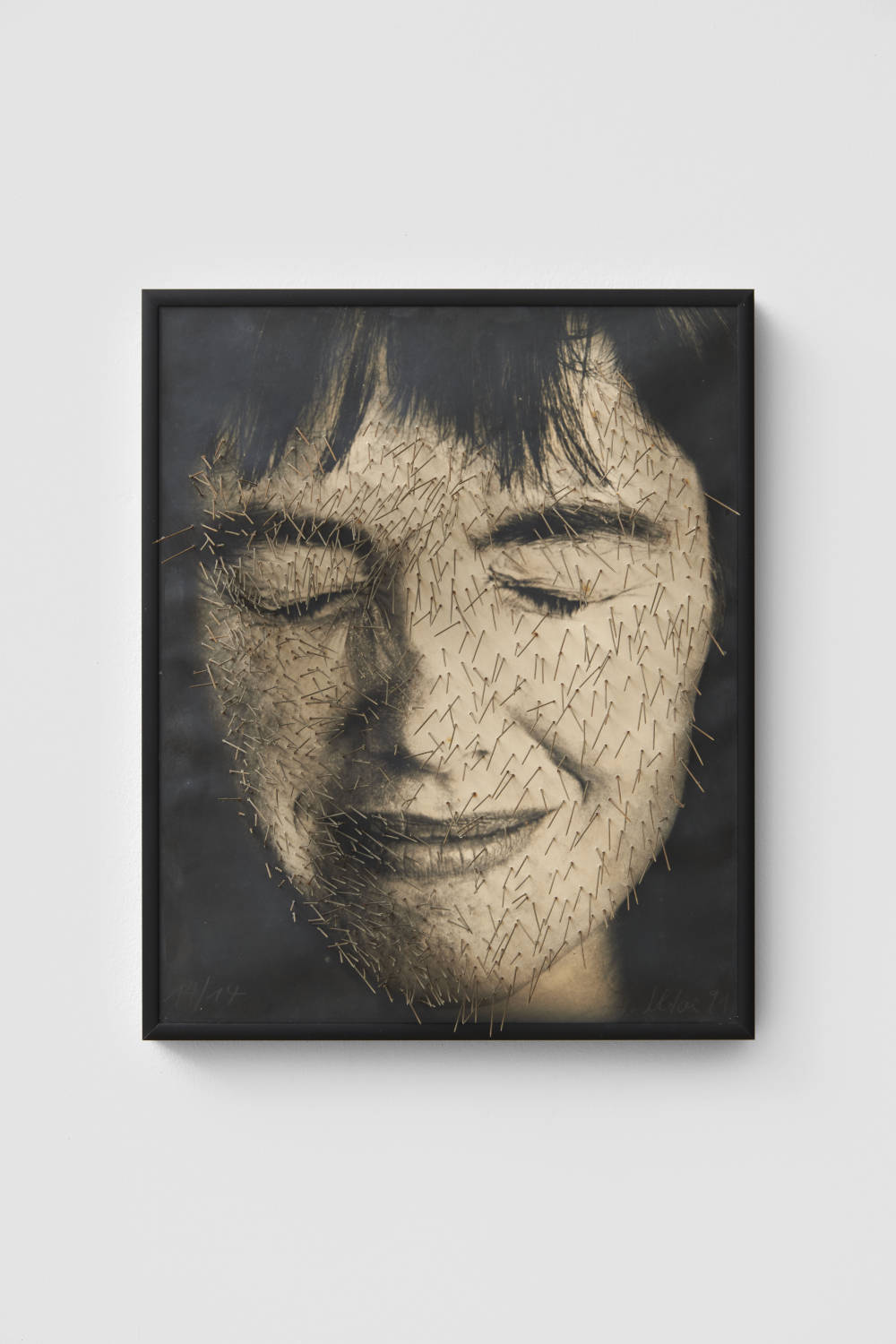 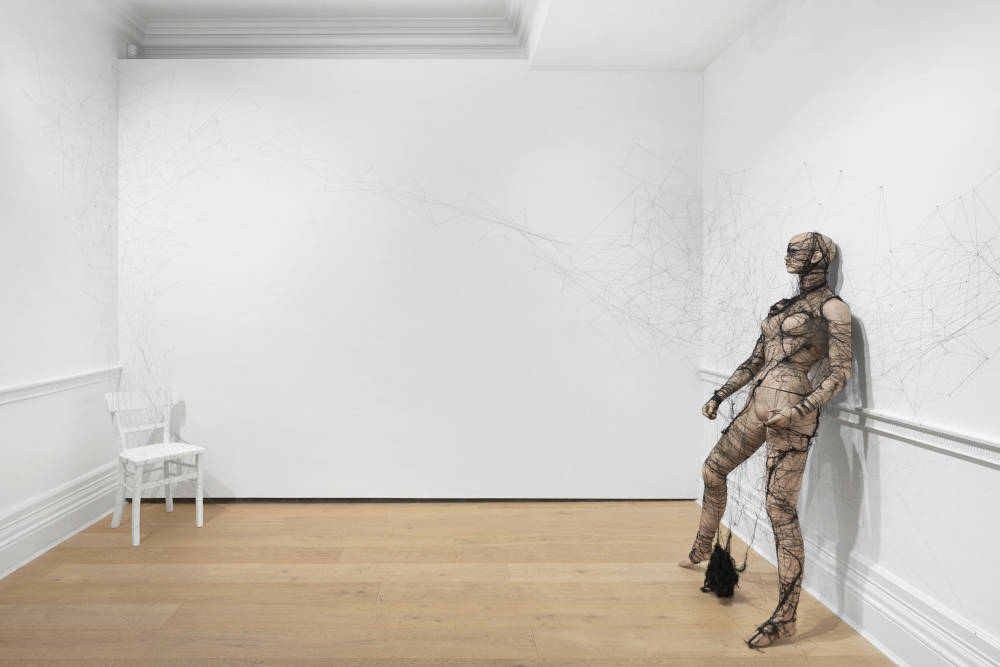 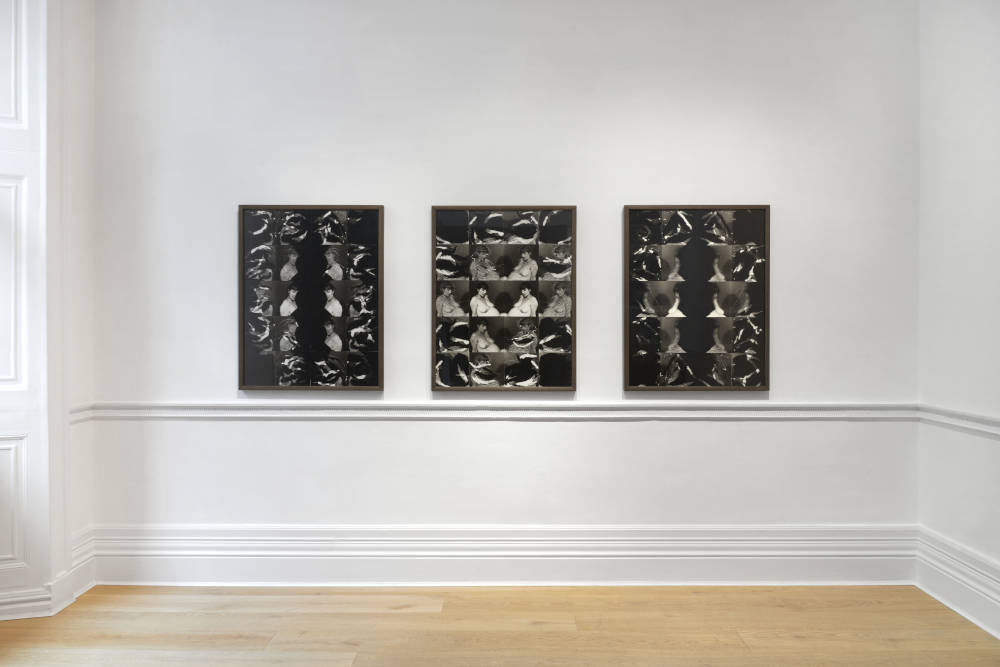 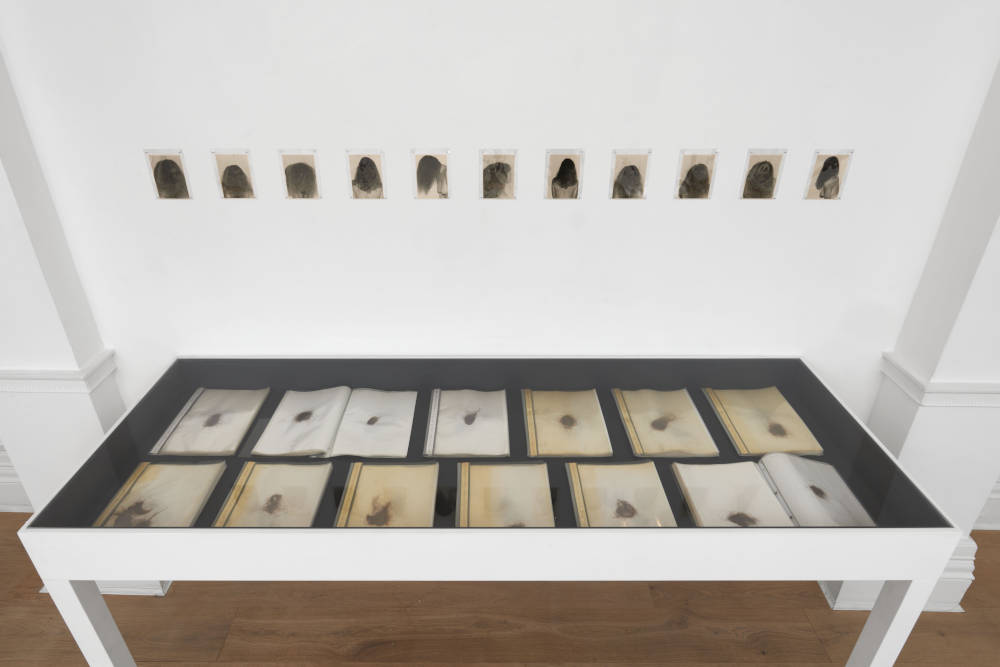 183 A4 sheets, each for 1 day, presented in 12 binders, each sheet dated and consisting of the artist's hair affixed to the paper, together with a set of 11 vintage black and white photographs
Each photo: 12 x 9 cm. Each sheet: 29.7 x 21 cm. Unique
© Annegret Soltau, VG Bild-Kunst, Bonn, Germany 2020. Courtesy of Richard Saltoun Gallery, London. 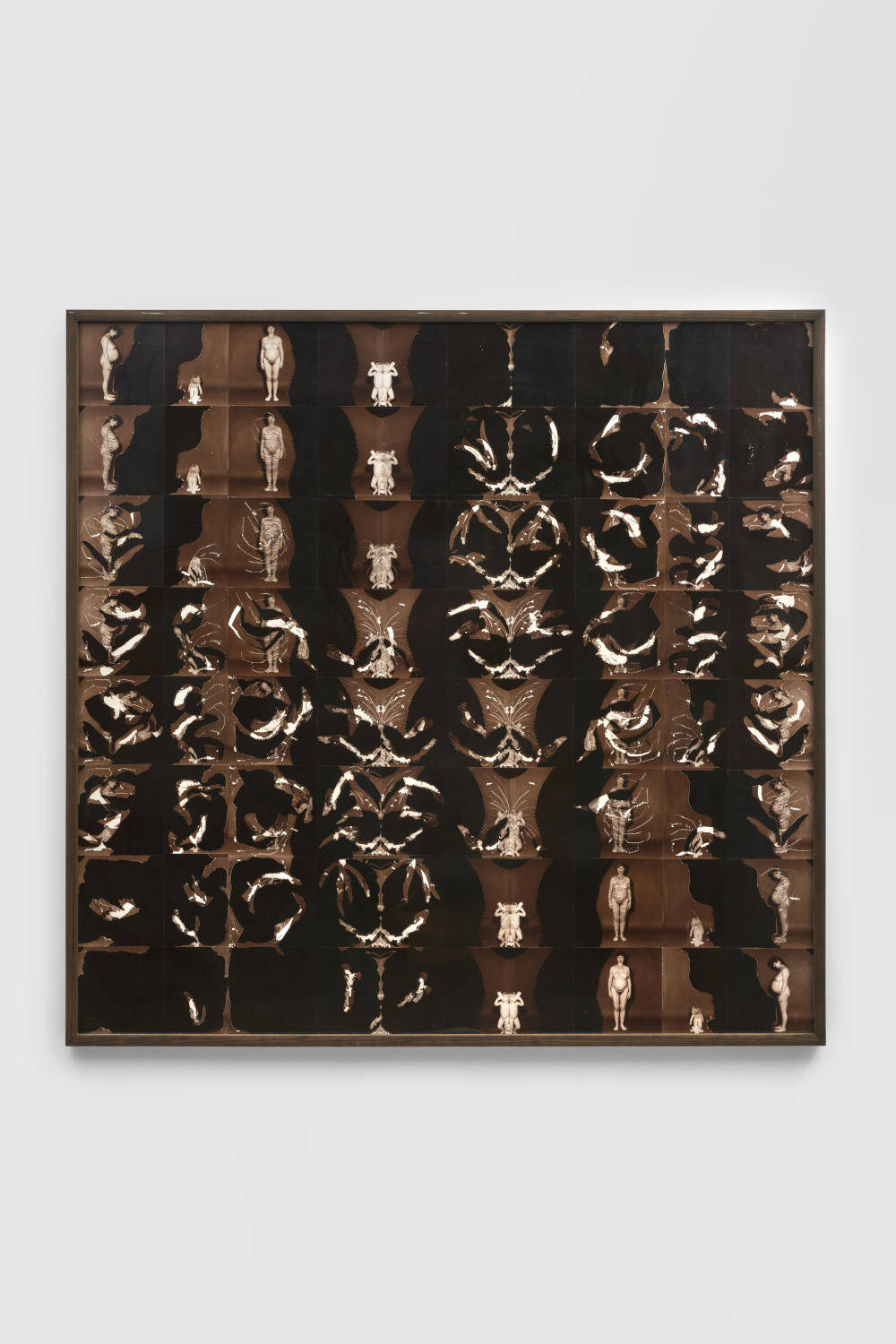 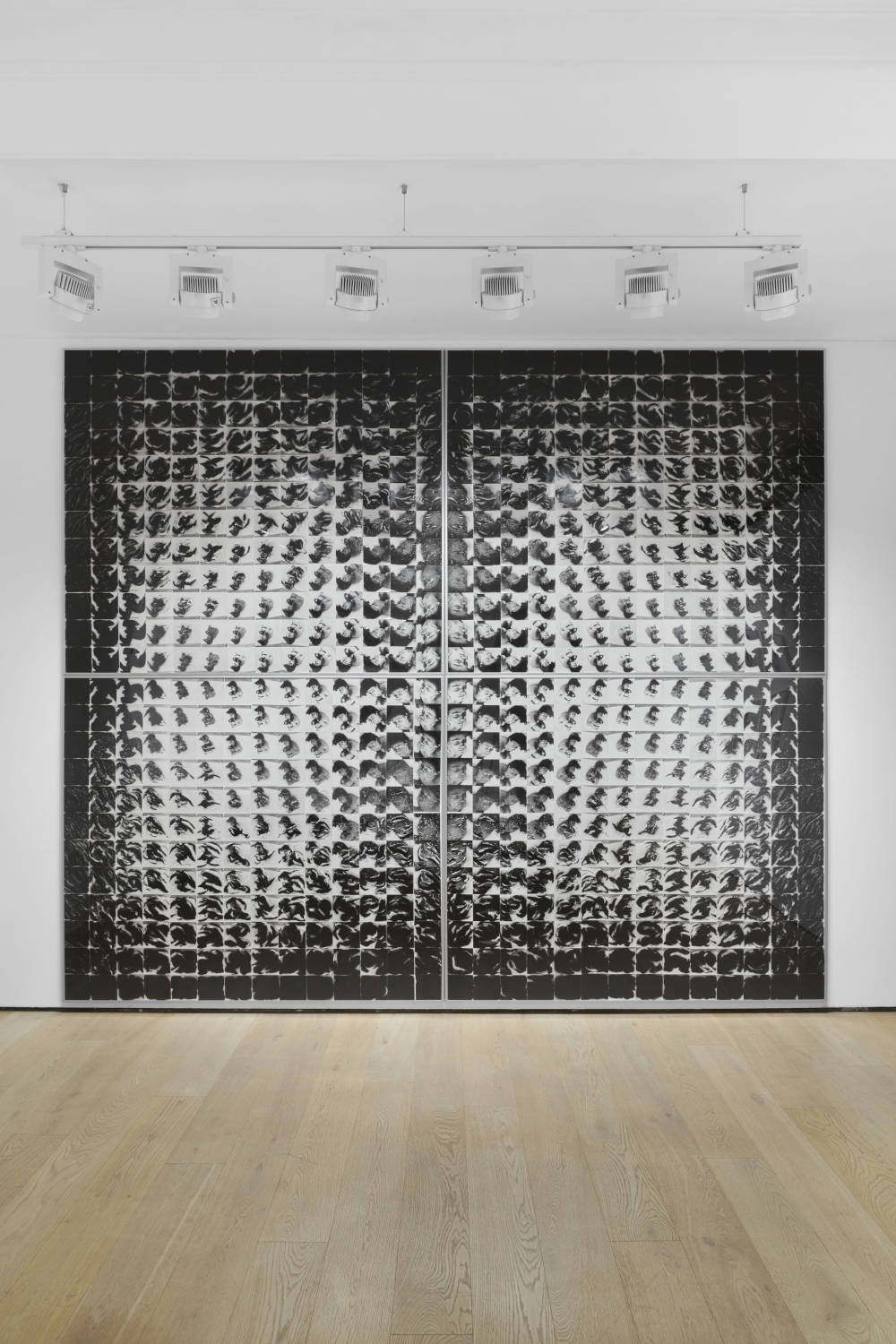 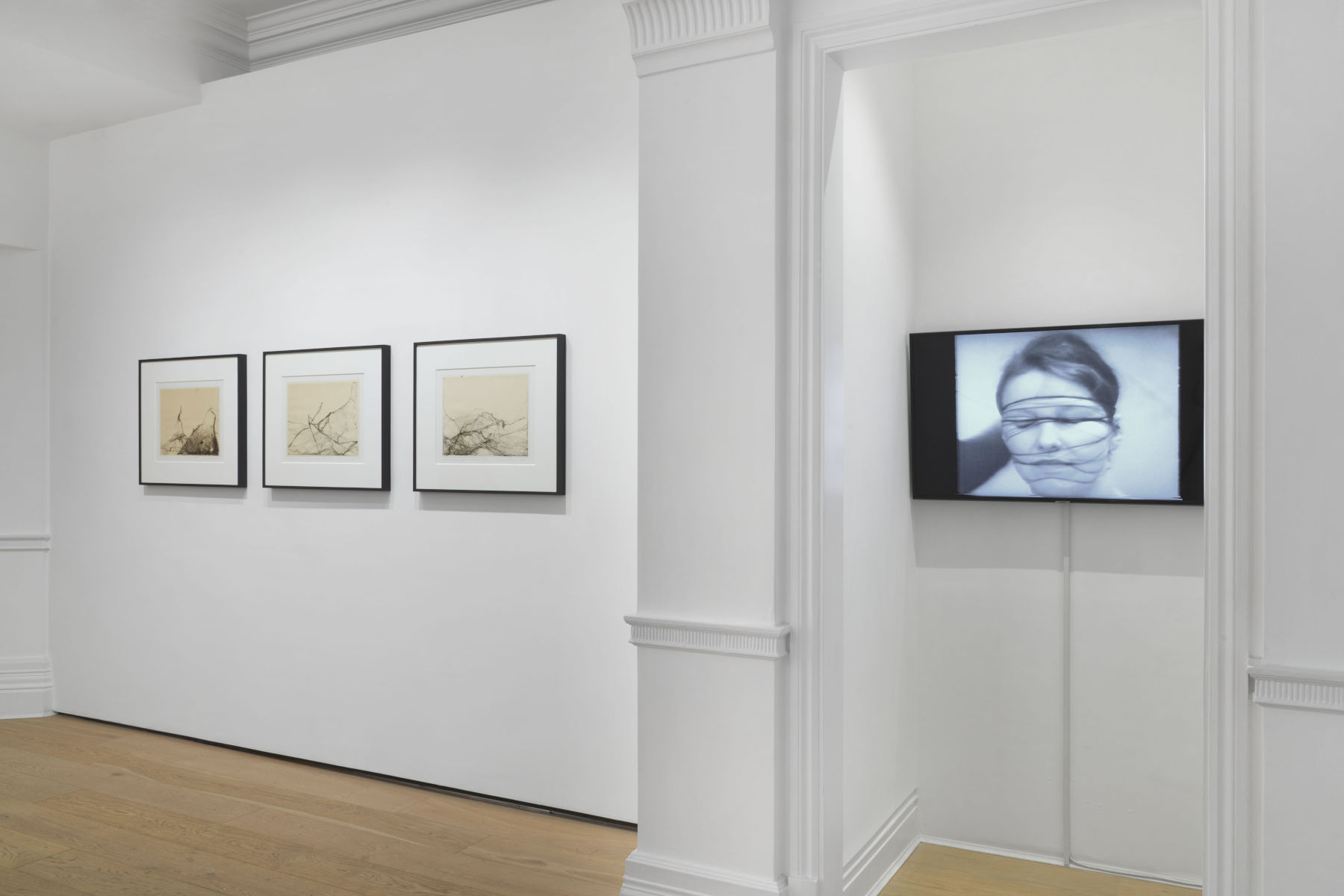 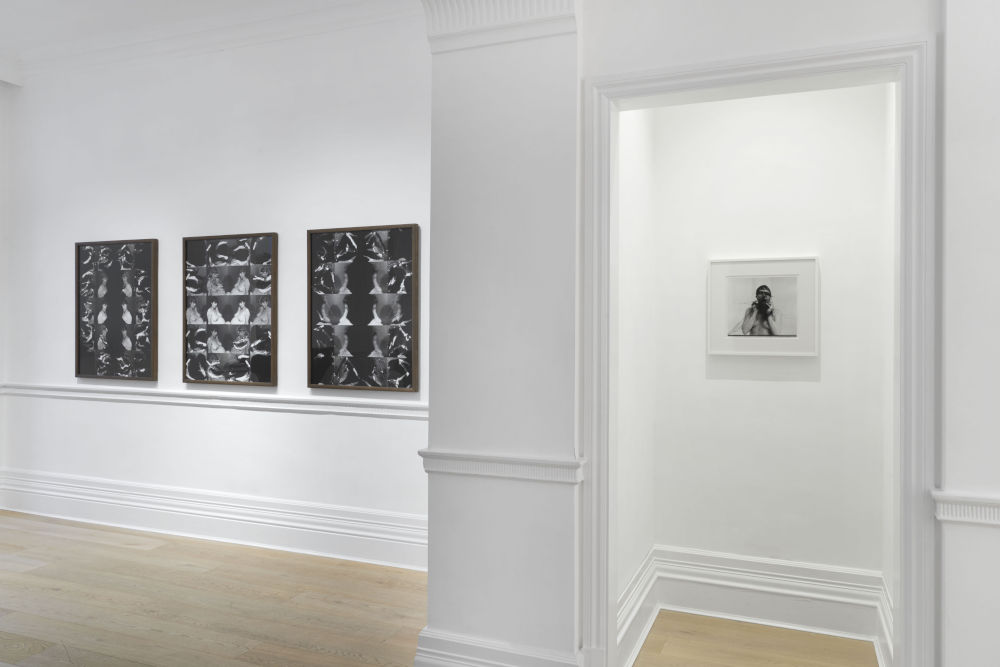 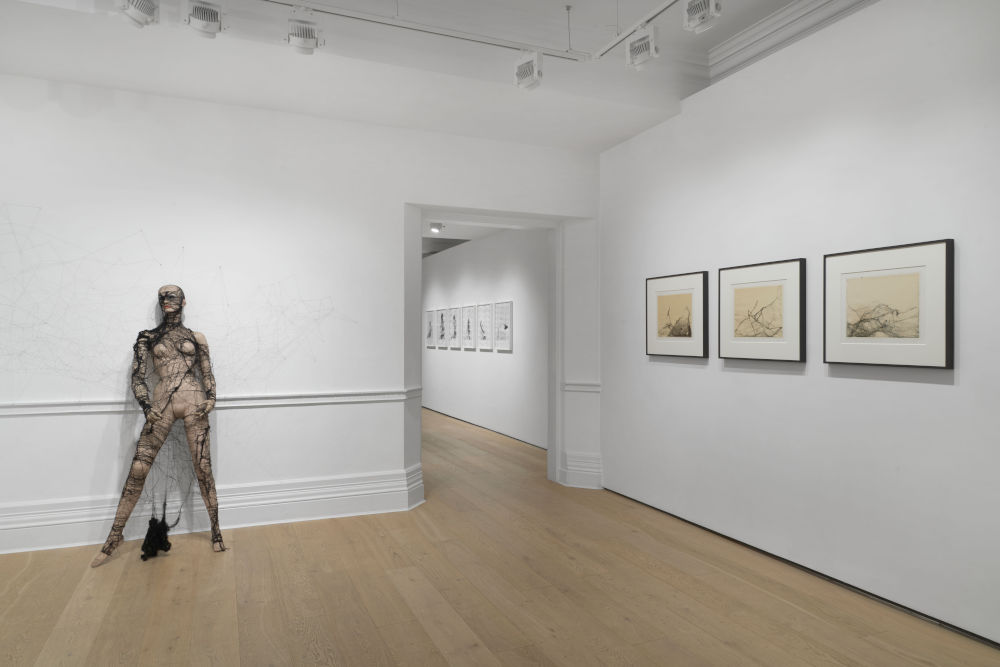 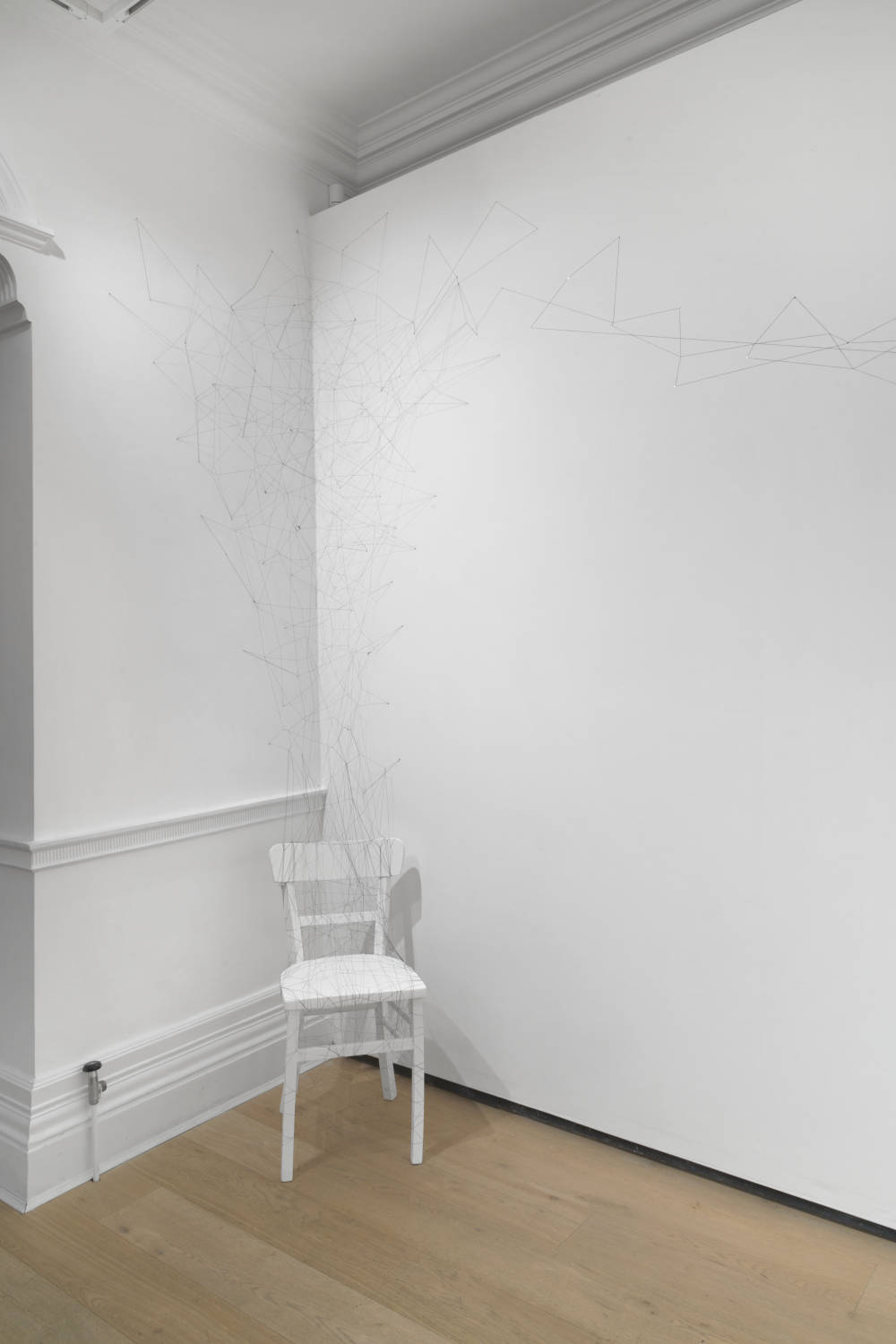 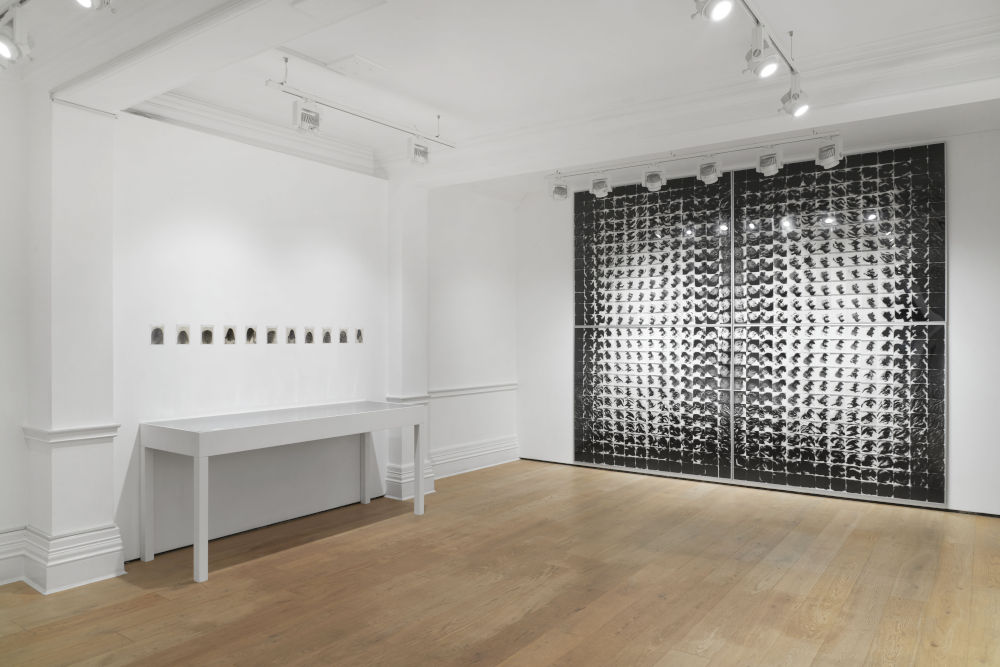 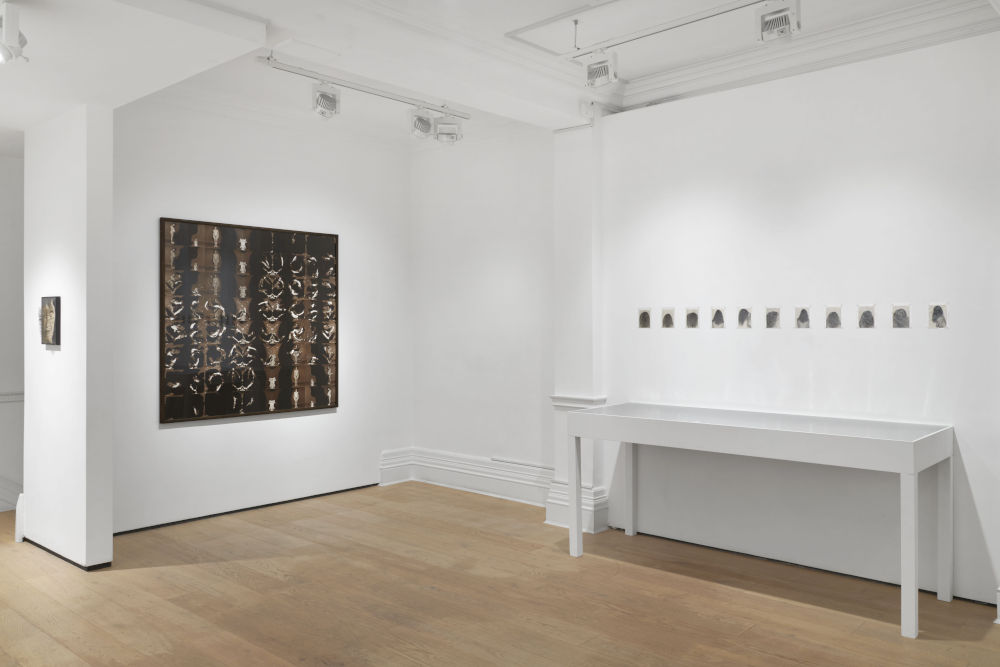 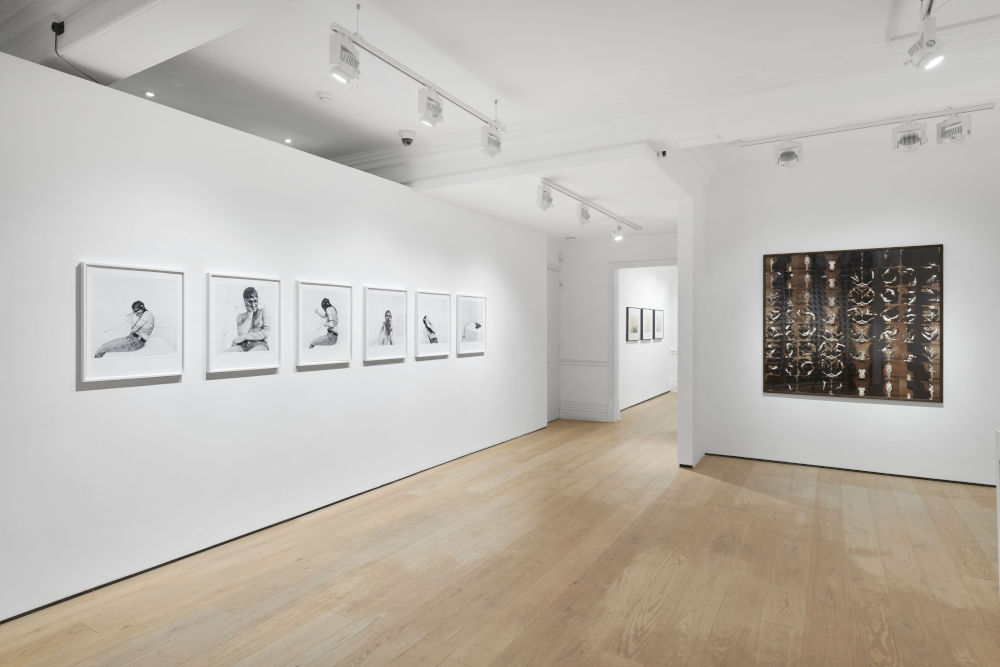 Since the 1970s, Annegret SOLTAU has developed a radical approach to self-representation and the female body, championing an experimental take on photography, collage and performance. A leading figure in the field of Body Art, Soltau’s oeuvre can be understood within the critical frame of Feminist thinking, without being defined by it.

Richard Saltoun is proud to present Soltau’s first solo exhibition with the gallery, which partially re-stages the exhibition SPIDER first held at Galerie Karin Friebe, Darmstadt in 1978 and includes large-scale photo etchings, thread installations, stitched photographs, and the artist’s haunting Spider Drawings. Addressing recurring themes of personal loss, identity and transformation (both bodily and psychological), the exhibition offers a rare insight into her early years in post-war Germany – which have been among the most distinctive stages of Soltau’s artistic development. Soltau’s work explores the distortion between human body and spirit, dwelling between fragile beauty and unnatural monstrosity.

In 1975, Soltau first began her ‘wrapping actions’ as part of a wider series titled Verbindungen [Ties], (1975- 1976). Using black thread, she would invite volunteers from the audience to be wrapped up in the thread, often to the point of becoming unrecognisable. Often wrapped up and tied together, members of the public were taken through a process that made “visible the dependencies, communicative relationships, and the extent to which we are controlled by others” (Annegret Soltau). Still often thought to be controversial today, her work was both the object of critical admiration and misinterpretation. After these performances, Soltau received a number of letters from men expressing the wish to be wrapped up for sexual purposes, rather than for any artistic endeavour.

Continuing her use with black thread, both Eingesponnene Schaufensterpuppe [Mannequin cocooned in thread] (1978) and Permanente Demonstration am 19.01.1976 (1976) give a sense of the pervasive potential of the use of black yarn in the artist’s early work, with both mannequin and the artist herself completely consumed in thick layers of thread.

Also featured in the exhibition are Soltau’s Spider Drawings, consisting of actual spider webs collaged on paper and revealing some of her most intimate reflections on the ways we perceive reality. The drawings delicately expose the ephemeral outcome of an insect’s bodily extroversion, contrasting this with predicted reactions of spontaneous revulsion.

Straddling these two conditions, Soltau addresses these with works inspired by her two pregnancies – driven both by the fear of their possible consequences on her artistic career, and the intrinsic transformations that they brought to her body. Daily Hair (1977), a set of 365 frames featuring the hair she lost over the course of her first gestation, offers a tactile representation of the imperceptible transformations she underwent at the time.

Additional highlights include Soltau’s monumental photo-etchings Sich-fallen-lasse [Let yourself fall] (1978/1986-7), made up of increasing scratches on the negatives’ surfaces, until the artist’s figure depicted in the prints entirely disappears. Moving between biographical narrative and social provocation, Soltau’s practice continues to challenge the established boundaries of Feminist artistic expression.

Soltau’s work was included in the critically acclaimed exhibition ‘Wack! Art and the Feminist Revolution’, the first comprehensive exhibition to examine the international foundations and legacy of Feminist art, organised by MoCA, Los Angeles in 2007, later travelling to MoMA PS1 in New York in 2008 and the Vancouver Art Gallery in 2009. Other important solo exhibitions include ‘Silberglanz. Von der Kunst des Alters (Silvery Radiance. The Art of Aging)’, Landesmuseum Hannover, Hanover, Germany (2017); ‘Share_ Connect’, Kunsthalle der Sparkassensti ung, Lüneburg, Germany (2016); ‘Personal Idenity’, Maurer Zilioli Contemporary Arts, Munich, Germany (2015); and ‘Oneness and Separation’, Frauen Museum, Bonn, Germany (2014). Her work is featured in the collections of the Museum of Fine Arts, Boston; Kunsthalle Bremen; Deutsche Bank; Hamburger Kunsthalle; SAMMLUNG VERBUND, Vienna and THE VERO GROUP. Her work is present public and private collections around the world, including the Hamburger Kunsthalle, the Staatsgalereie Stuttgart, the Kunsthalle Bremen and the collection of the Deutsche Bank.