Annka Kultys Gallery presents mesh, an exhibition of recent paintings and sculptures by New York-based artist Anne Vieux. This is the artist’s first solo show with the gallery in London. 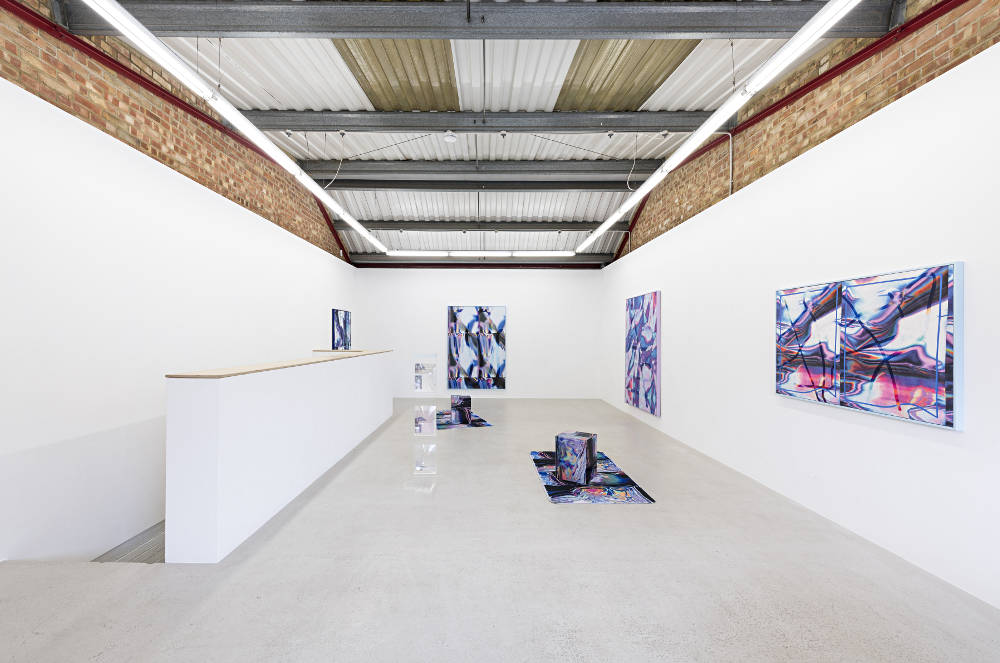 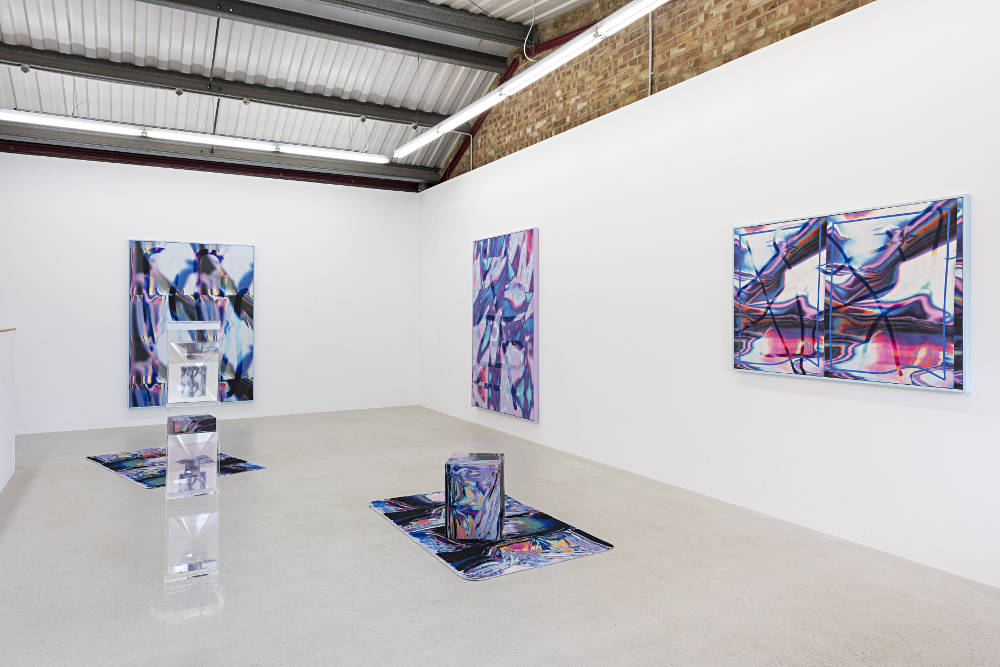 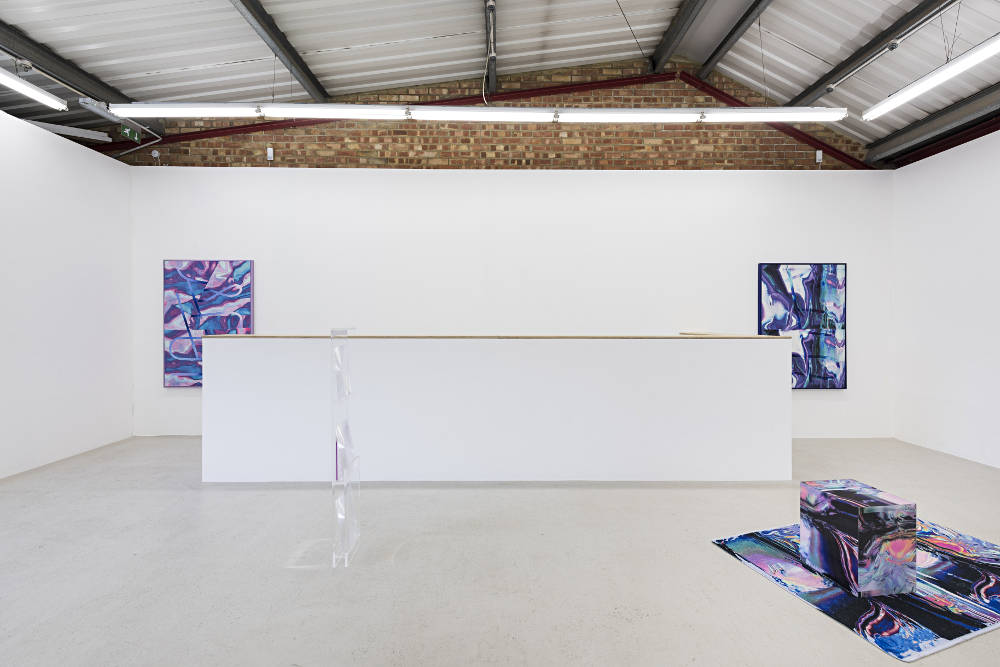 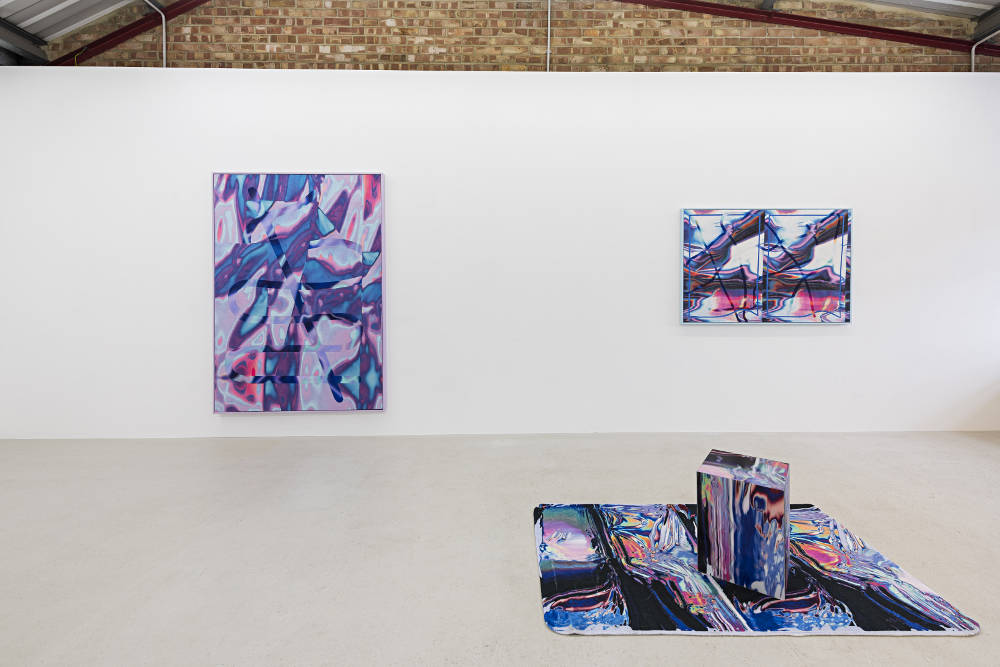 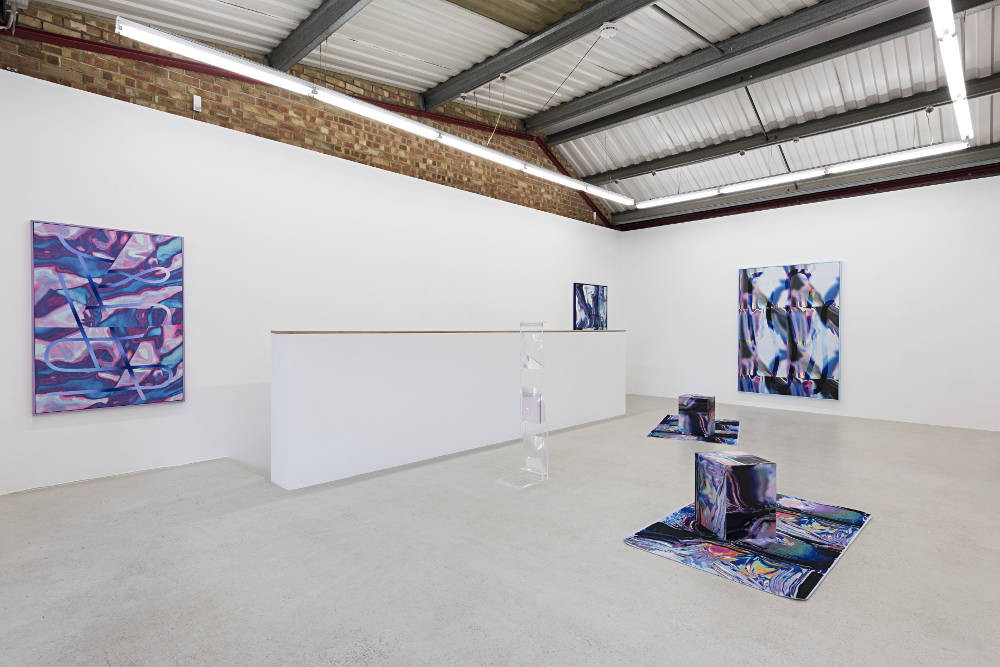 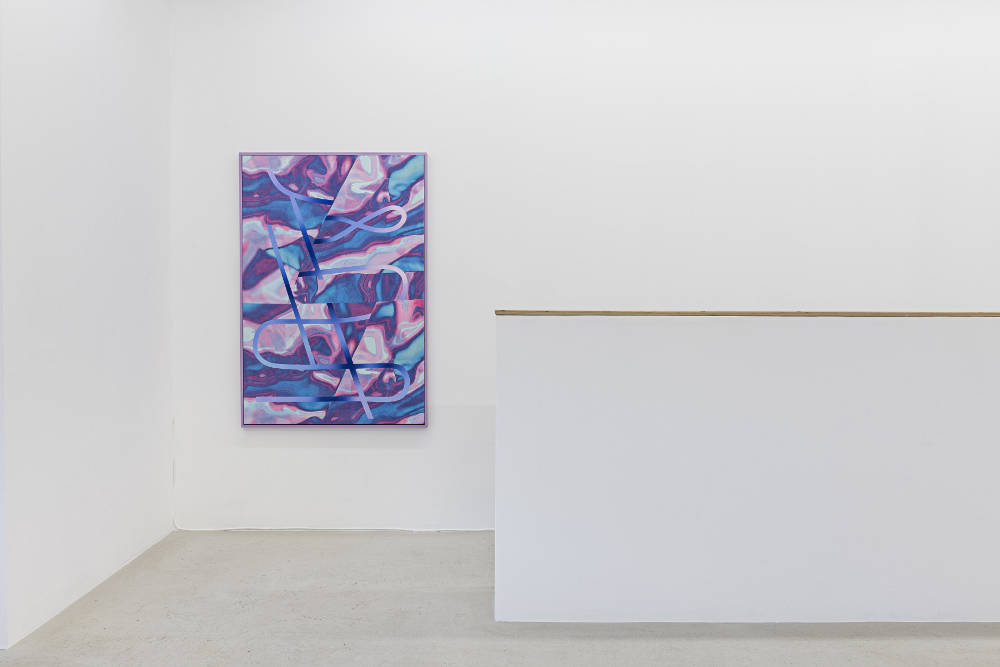 Vieux’s work explores the optics of the computer screen and the implications of light on abstraction, through digital reproductions of material surfaces. Images of holographic and translucent paper are captured and altered digitally via layers of warping and repetition, then printed on to microfibre fabric. Lines of airbrushed acrylic paint are added, alluding to “a needle threading the surface (into) other realms.” The artist’s process highlights the layers in each piece, shifting between actuality and re-digitisation; before finally being absorbed into the finished ‘holistic piece.’

mesh takes form around the concept of ‘enmeshment,’ a sociological term first used by the Argentine family therapist, Salvador Minuchin, which generally denotes relationships between two or more entities in which personal boundaries are permeable and unclear. Vieux’s work follows the logic of 3D-modelling software, making the physical and digital indistinguishable; creating a space for the viewer within the virtual realm of the painting.

The exhibition is comprised of five paintings and three sculptures. The paintings are notable for their ultra-saturated images in bright, fractured hues of purples, blues, pinks, reds and greens, which ground the fluidity of the digital within the material of the undulating velveteen surfaces. To this colourful opulence, Vieux inverts positive and negative space through her use of line to unify sections of each work. The end result is paintings of startling luminescence.

The sculptures on show in mesh demonstrate two distinct approaches within Vieux’s sculpture practice. Some pieces appear to almost erupt out of the floor, engaging directly with objects beneath and around them, such as carpets, cubes and related images. These may be contrasted with the artist’s lenticular plastic pieces, which exhibit an ethereal interaction with the spaces they inhabit, the inherent translucency of the medium enabling them to react to their ambient light creating new images in a manner not dissimilar to how photography harnesses light’s power to generate new meaning. The combination of the sculptures’ contingent imagery and the velveteen surfaces of the paintings slows the reading of the virtual and speeds the experience of physical space.

The works exhibited in mesh have been hung low to foster a body-scaled experience emphasising the viewer’s physicality. As a mediator between illusion and materiality, the notion of the viewer’s body is woven into the mesh of the show; the mesh that links the synthetic and organic and indeed the very mesh from which the show takes its title. Traversing between the artificial and concrete, Vieux’s works employ a mode negotiating both realms, introducing the viewer’s consciousness to unknown spaces.

Born in Michigan in 1985 and currently based in New York, Anne Vieux received her MFA from Cranbrook Academy of Art in 2012 and her BFA in Painting and Art History at the Kansas City Art Institute in 2009. She recently held a residency at Mana Contemporary, Jersey City, NJ. Annka Kultys Gallery will host the artist’s first solo presentation in London in 2017.