Sprüth Magers presents a solo exhibition of new works by Anne Imhof in London—the first show to span all four of the gallery’s floors. 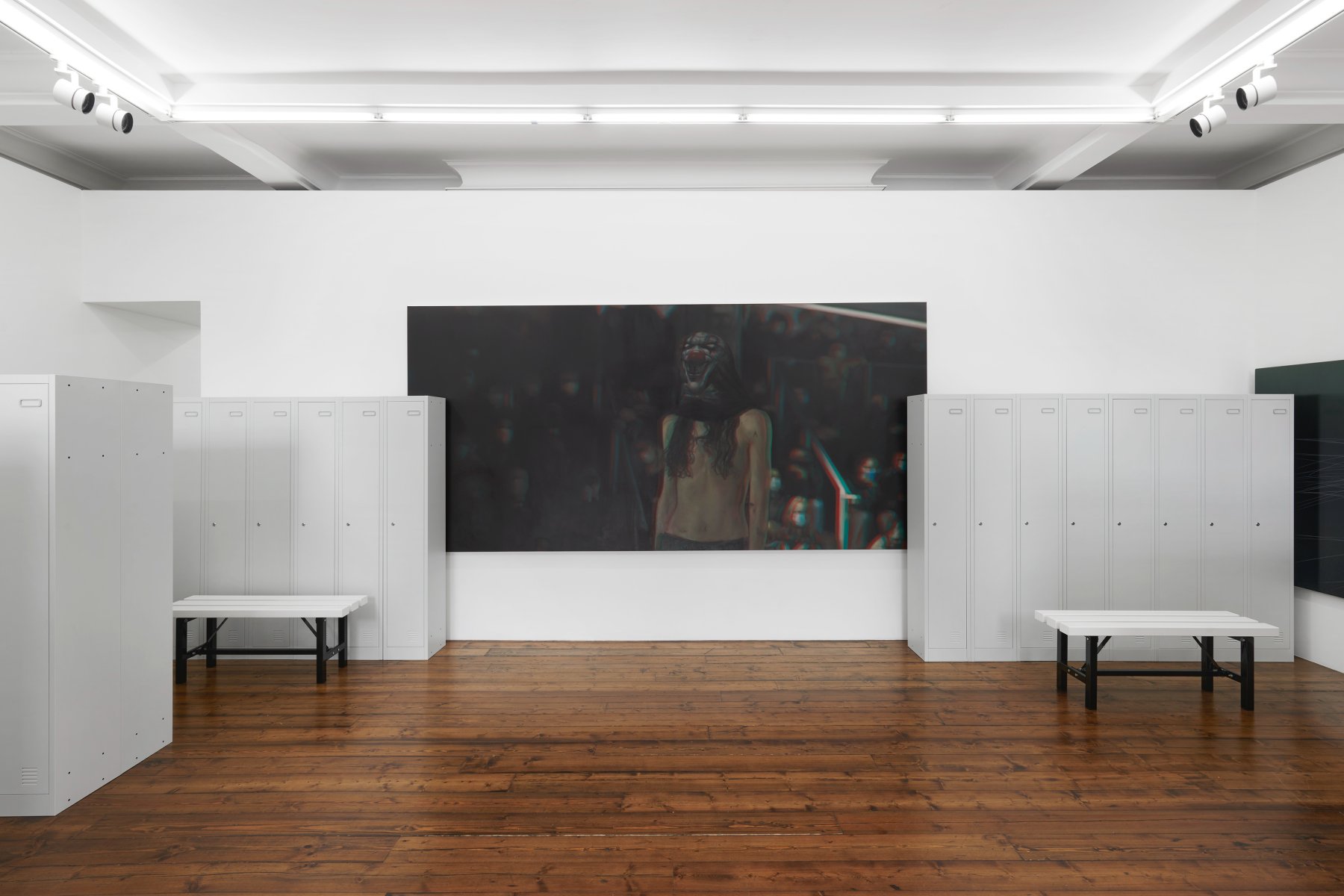 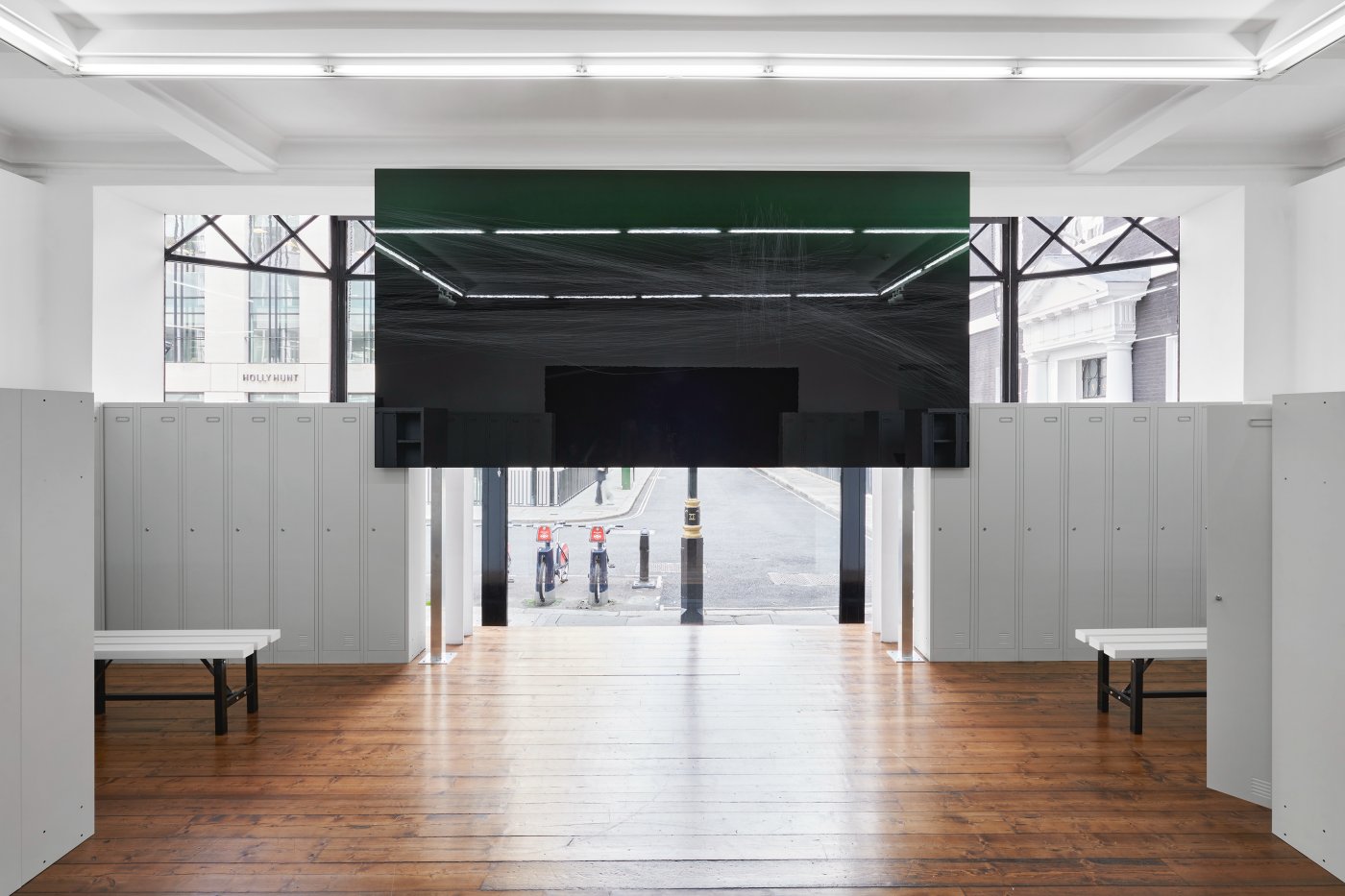 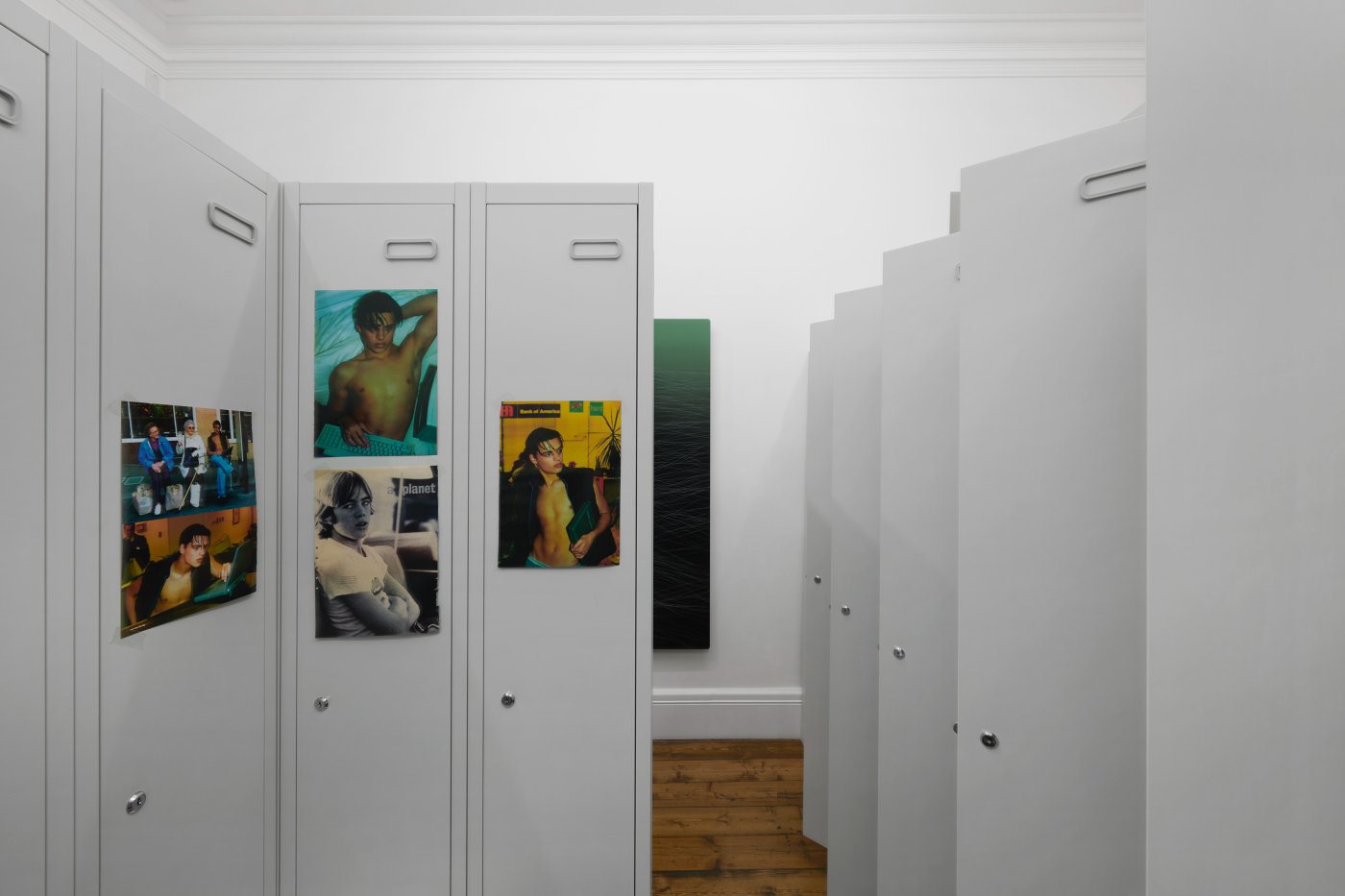 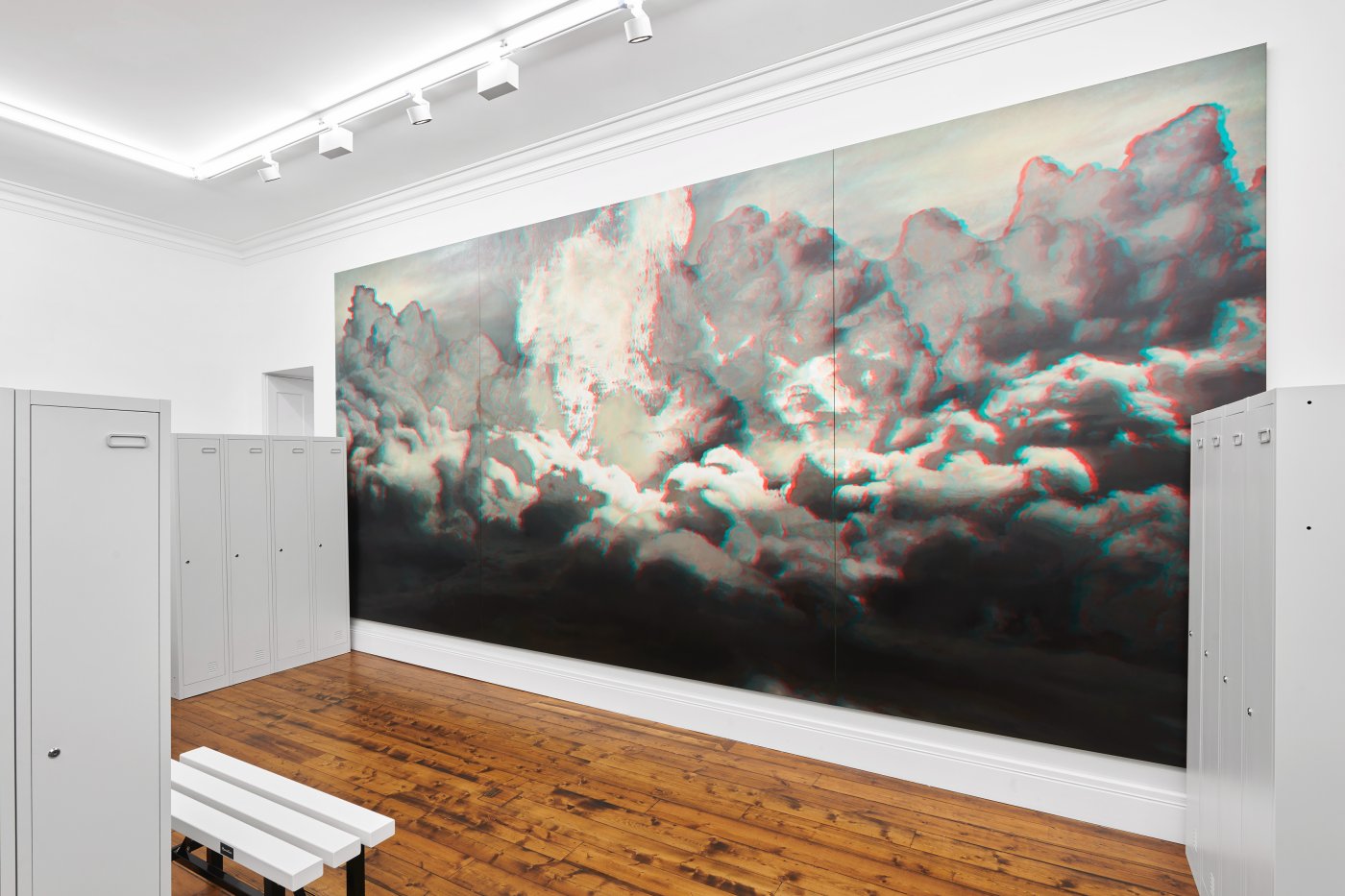 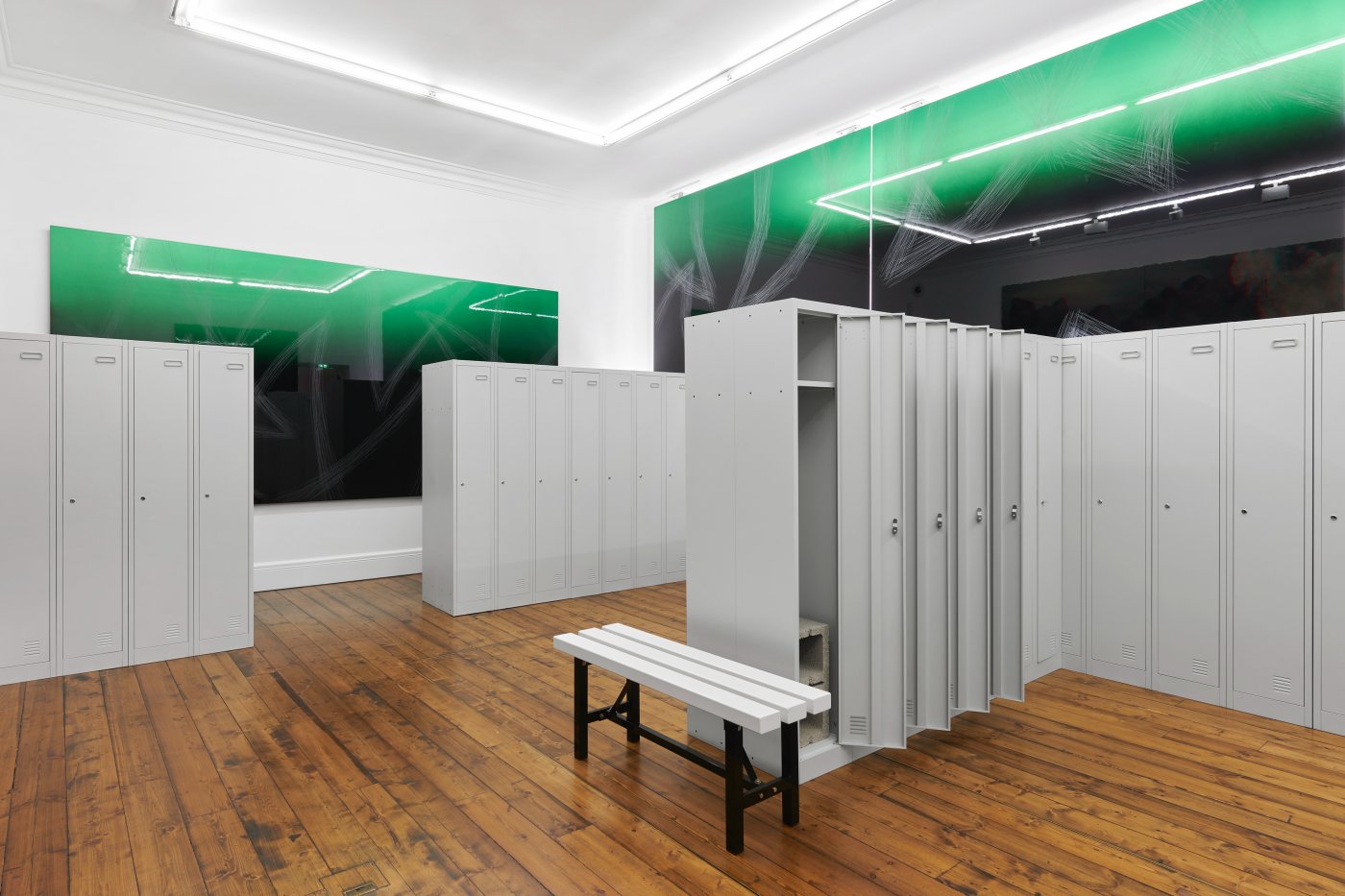 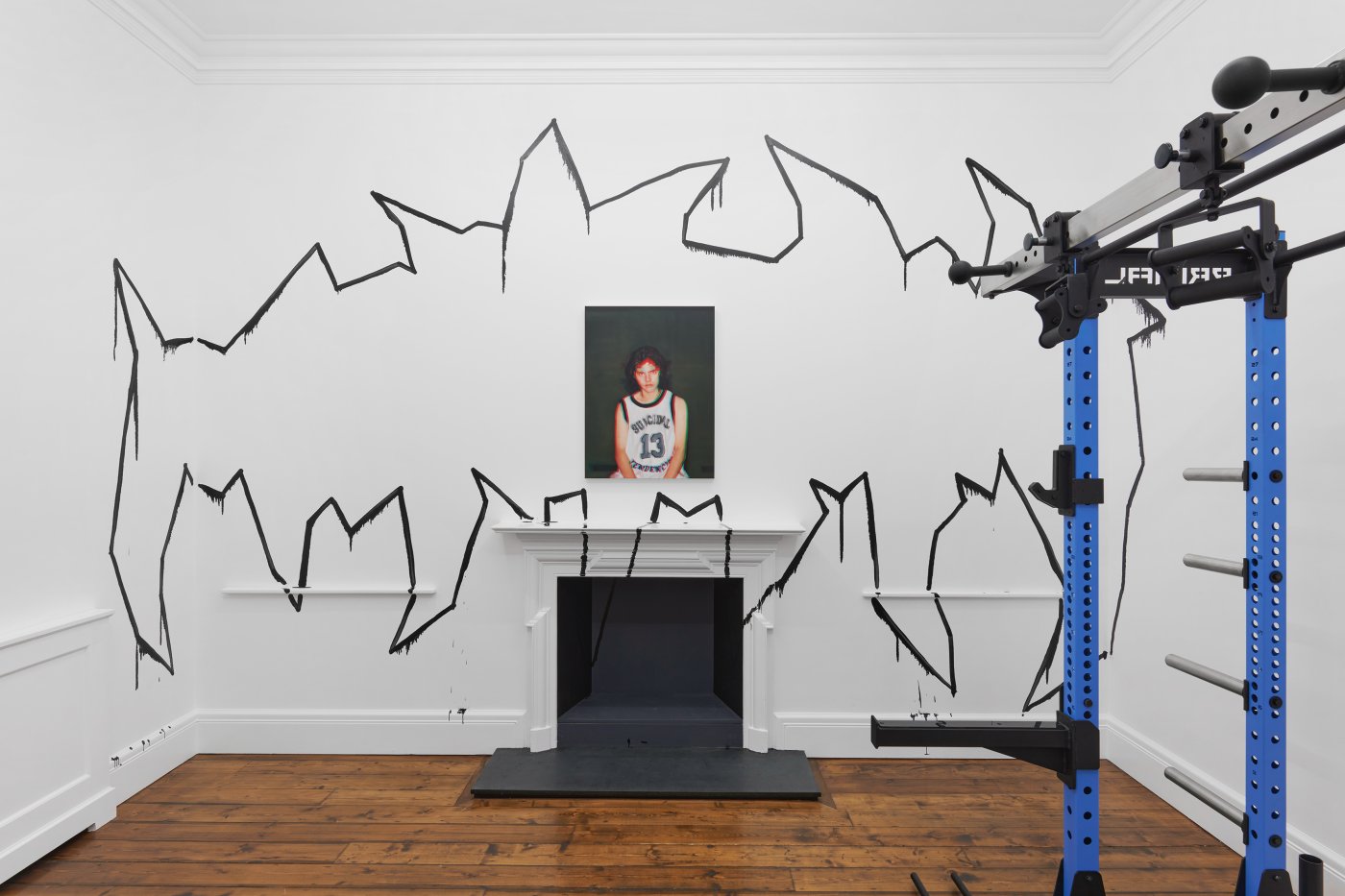 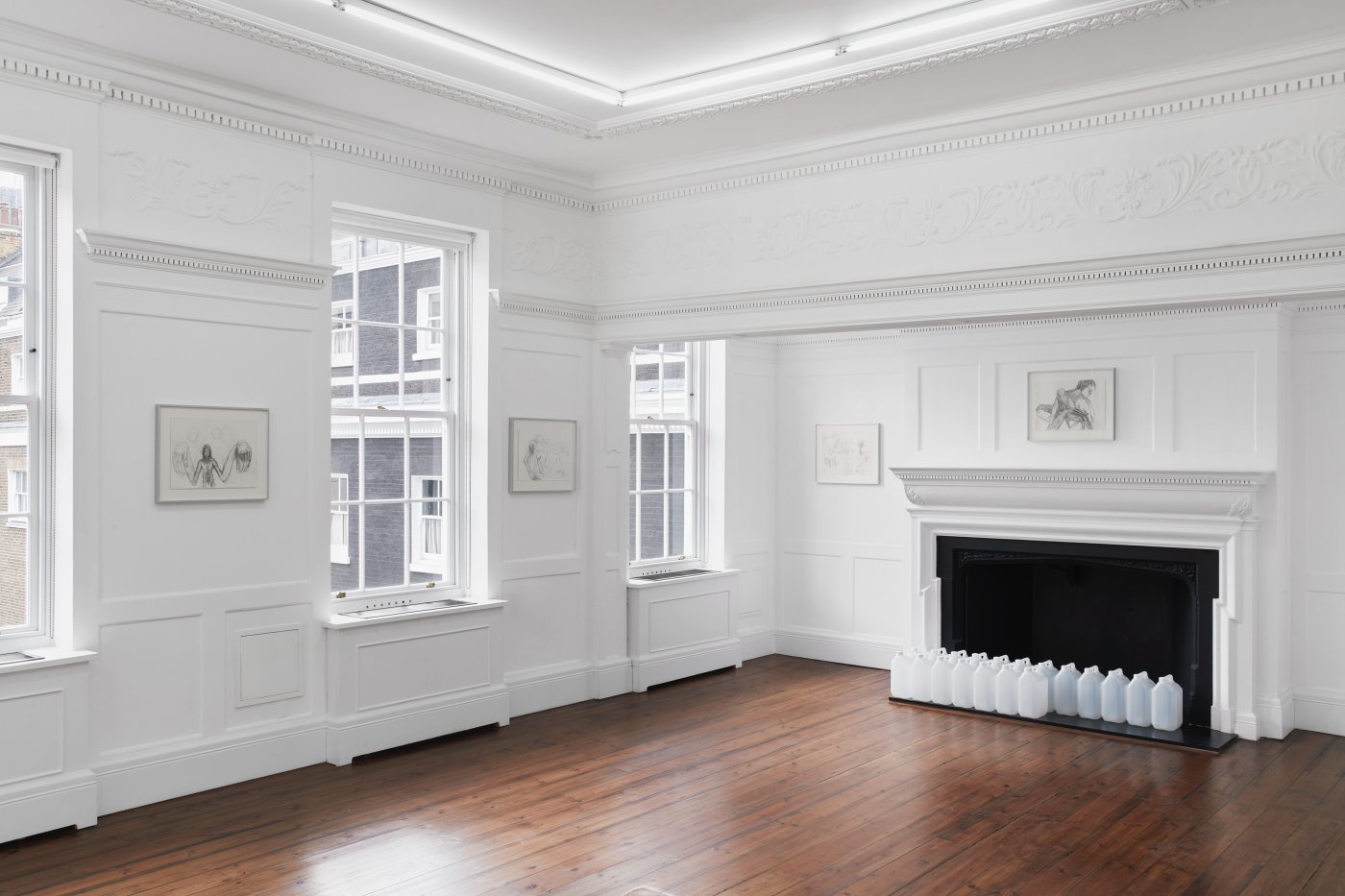 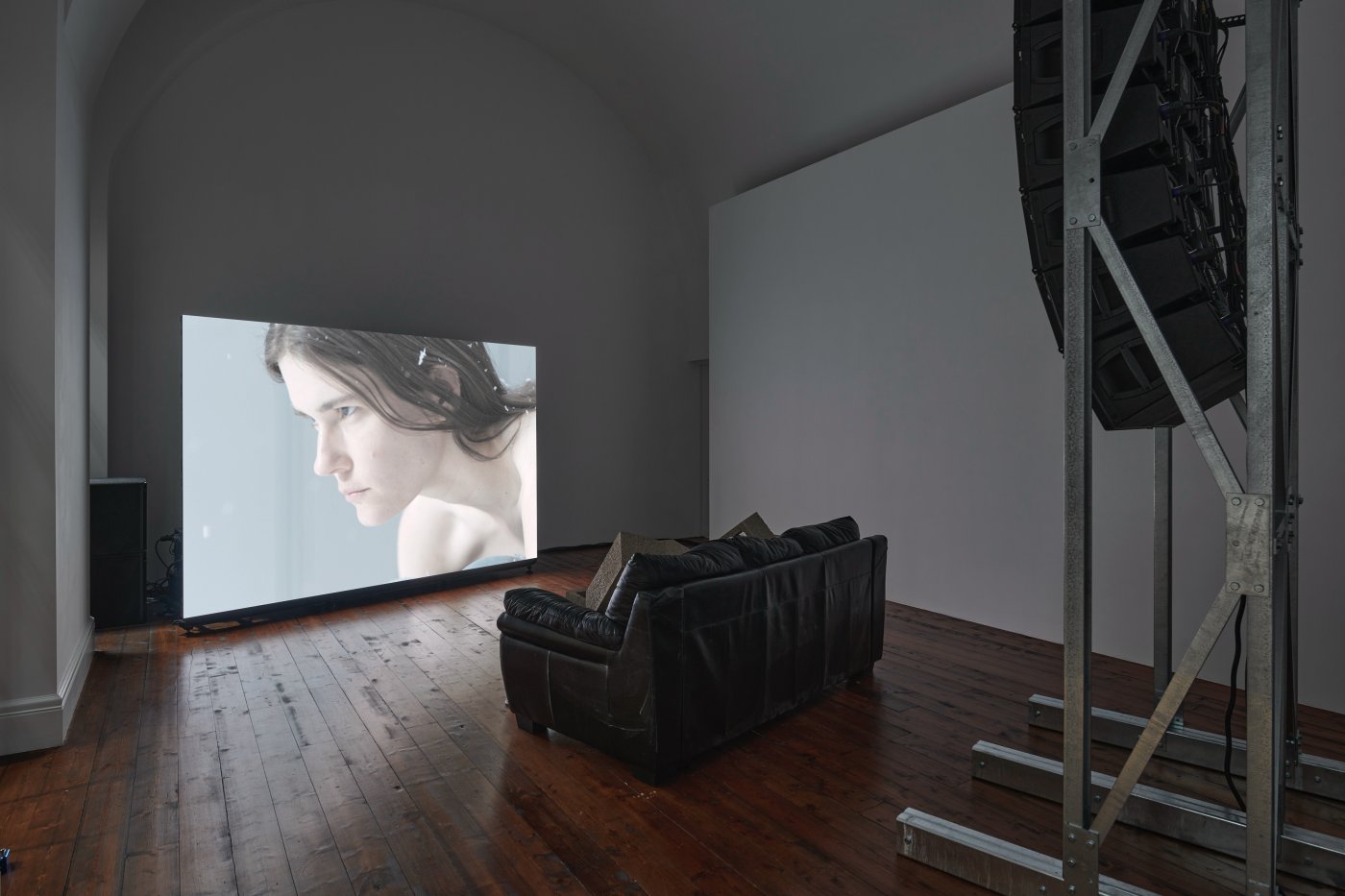 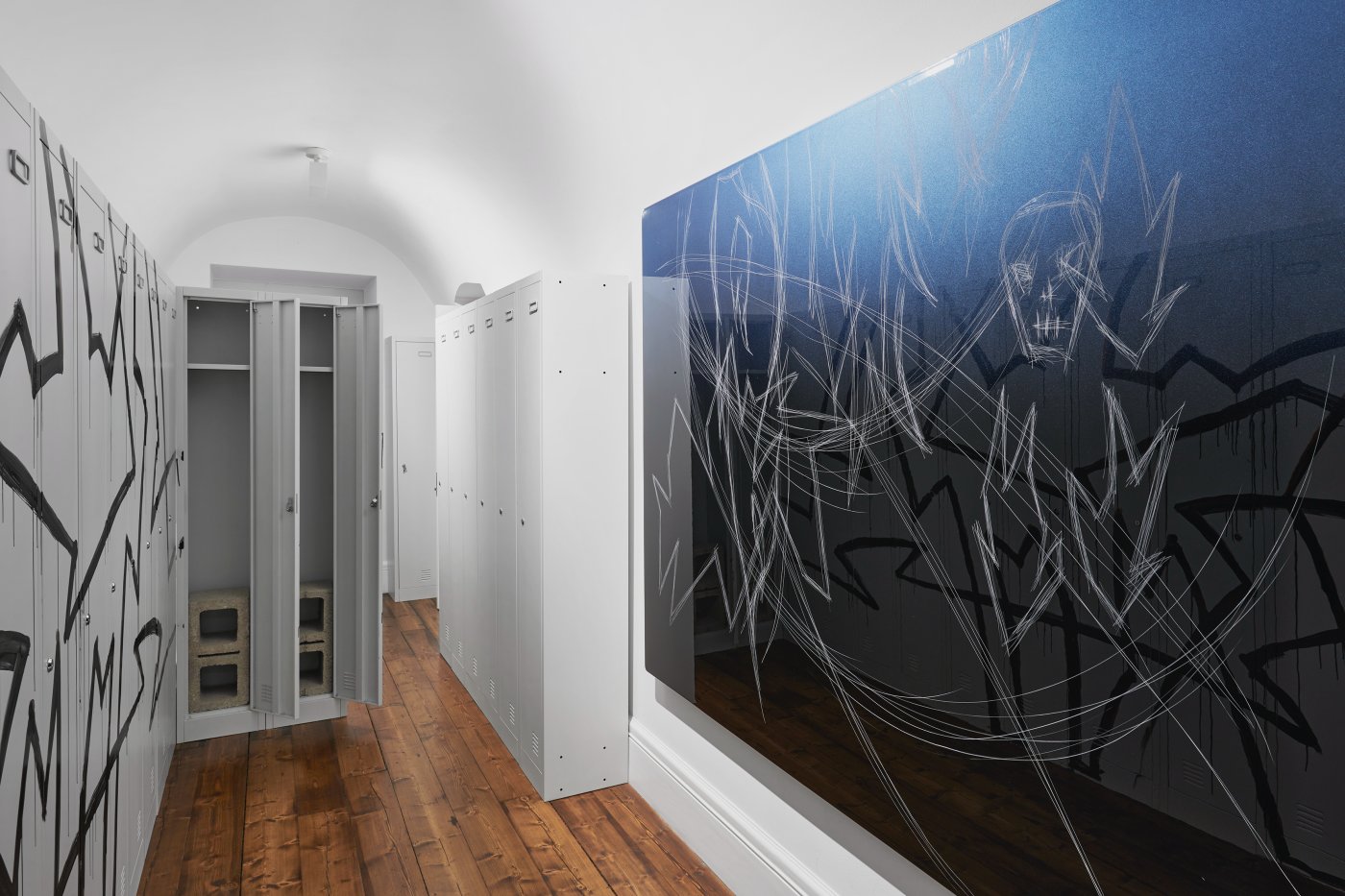 Continuing and expanding upon the narrative arc of Imhof’s recent exhibitions, the works range from oil paintings, large-scale paintings on aluminum panels, and drawings to film and sound works that interweave notions of reality and artifice, presence and absence, exposure and concealment. Fitness equipment and gym furniture are installed throughout the gallery, blurring the boundaries between functional object and art while creating a multilayered experience as visitors encounter and move through Imhof’s abundant spaces.

Imhof’s spatial orchestrations are evident from the outset: as visitors approach the exhibition from street level, their line of sight into the gallery’s glass storefront is delimited, boxed in by rows of lockers and blocked in part by the back of one of Imhof’s aluminum panel works suspended unexpectedly from the ceiling. Just below this hanging panel, at the back of the room, one catches a glimpse of a painting depicting Imhof’s collaborator Eliza Douglas. The image is captured from a performance last year as part of Imhof’s celebrated exhibition Natures Mortes at the Palais de Tokyo in Paris. Walking deliberately, her torso nude, she has obscured her face with a sinister clown T-shirt pulled over her head, taking on the guise of a jester. A rare figurative painting in Imhof’s oeuvre, this work sets a tone of beauty, imagined dystopia and foreboding that frequently accompanies the artist’s work.

Imhof’s experimental, restrained approach to installation unfolds further in the subsequent galleries. Where the artist utilized a labyrinthine network of glass facades in Natures Mortes, (here she turns to monochromatic banks of gym lockers sourced onsite in the UK. On the one hand these structures create rooms and passageways for the spectator, with benches that encourage rest and contemplation; on the other, they bar entry and connote the secreting of objects and information, while also suggesting the presence bodies and physical exertion. Several of Imhof’s “scratch” paintings are installed in front of the lockers, behind them, or in unlikely positions on the wall, redefining the exhibition space and establishing an architecture all their own. With their tones of cool blue-greens, the paintings likewise guide viewers along Imhof’s immersive path, in which a productive confusion arises between art, objects and architectural elements.

Another monumental, multi-panel canvas occupies an adjacent room depicting an explosion, and like the portrait of Douglas, it features a three-dimensional effect new to Imhof’s painting practice. Though at first the image appears realistically rendered in grayscale, a closer look reveals fields of pale red and greens, as well as the flattened 3D effect—imagery all painted by hand, but generated digitally. This work and its array of techniques re-emphasize the dialogues between object, artifice and performance inherent to Imhof’s work, which permeate and electrify her London installation.

The physical, “real” presence of the lockers and benches is rendered surreal and abstract in a new film debuting within the exhibition. Douglas appears again, this time occupying an amorphous space as she sits and stands surrounded by one of the locker-room benches and a row of lockers. The film’s backdrop shifts between abstracted fields of color and light. Though bodies are mostly absent in Imhof’s artworks—which often imply potential sites for performances—in this case the human body is fully present and the background is what becomes nebulous and intangible. This aspect of the film also serves as a metaphor for Imhof’s approach more broadly: to deploy specific, precise objects and imagery that nevertheless project a universal, expansive realm for imagination.

Further revealing Imhof’s sensitive use of space and the human form are a selection of drawings, in which spare, purposeful lines delineate attenuated bodies in motion. Artworks in their own right, the drawings can also be understood as preparatory gestures for future performances, which, like her objects and installations, Imhof carefully plans in tune with the spaces they occupy. In this exhibition, as in the artist’s work as a whole, Imhof masters space and builds expectations for the viewer, only to twist and sabotage any clear-cut interpretations of her immersive, unnerving and powerful environments.

Anne Imhof (*1978, Gießen) lives and works in Berlin and New York. Her paintings, sculptures, and performances have been shown internationally since 2012. Imhof’s work has been the subject of monographic exhibitions at Palais de Tokyo, Paris (2021), Tate Modern, London (2019), Art Institute of Chicago (2019), Hamburger Bahnhof, Berlin (2016), Kunsthalle Basel (2016), MoMA PS1, New York (2015), Carré d’Art – Musée d’Art Contemporain de Nîmes (2014) and Portikus, Frankfurt (2013). Her work has also been featured in numerous group exhibitions, including at including at Tai Kwun, Hong Kong (2019), La Biennale de Montréal (2016), Centre Pompidou, Paris (2015), and Museum für Moderne Kunst, Frankfurt (2014). She represented Germany at the 2017 Venice Biennale, where she was awarded the Golden Lion for Best National Participation; she has also won the Absolut Art Award (2017) and the Preis der Nationalgalerie (2015). Imhof was a guest professor and artist-in residence at the Akademie der Bildenden Künste, Munich (2015) and a visiting artist at Städelschule, Frankfurt; Yale University, New Haven; and ArtCenter College of Design, Pasadena, among others. Imhof co-writes the music for her performance pieces, and her debut album, Faust, was released by PAN in 2019. A major solo exhibition will be on view at Stedelijk Museum Amsterdam from October 2022.