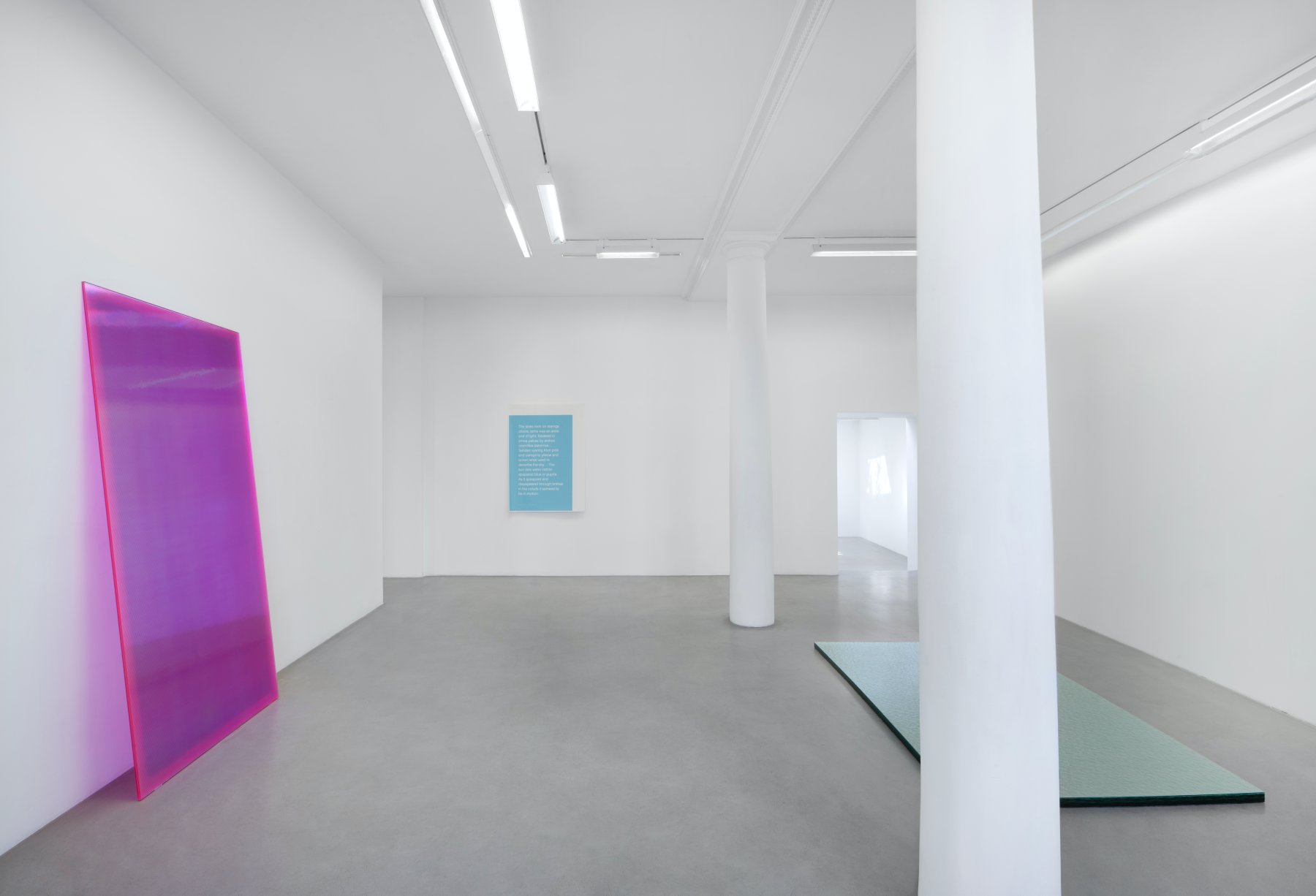 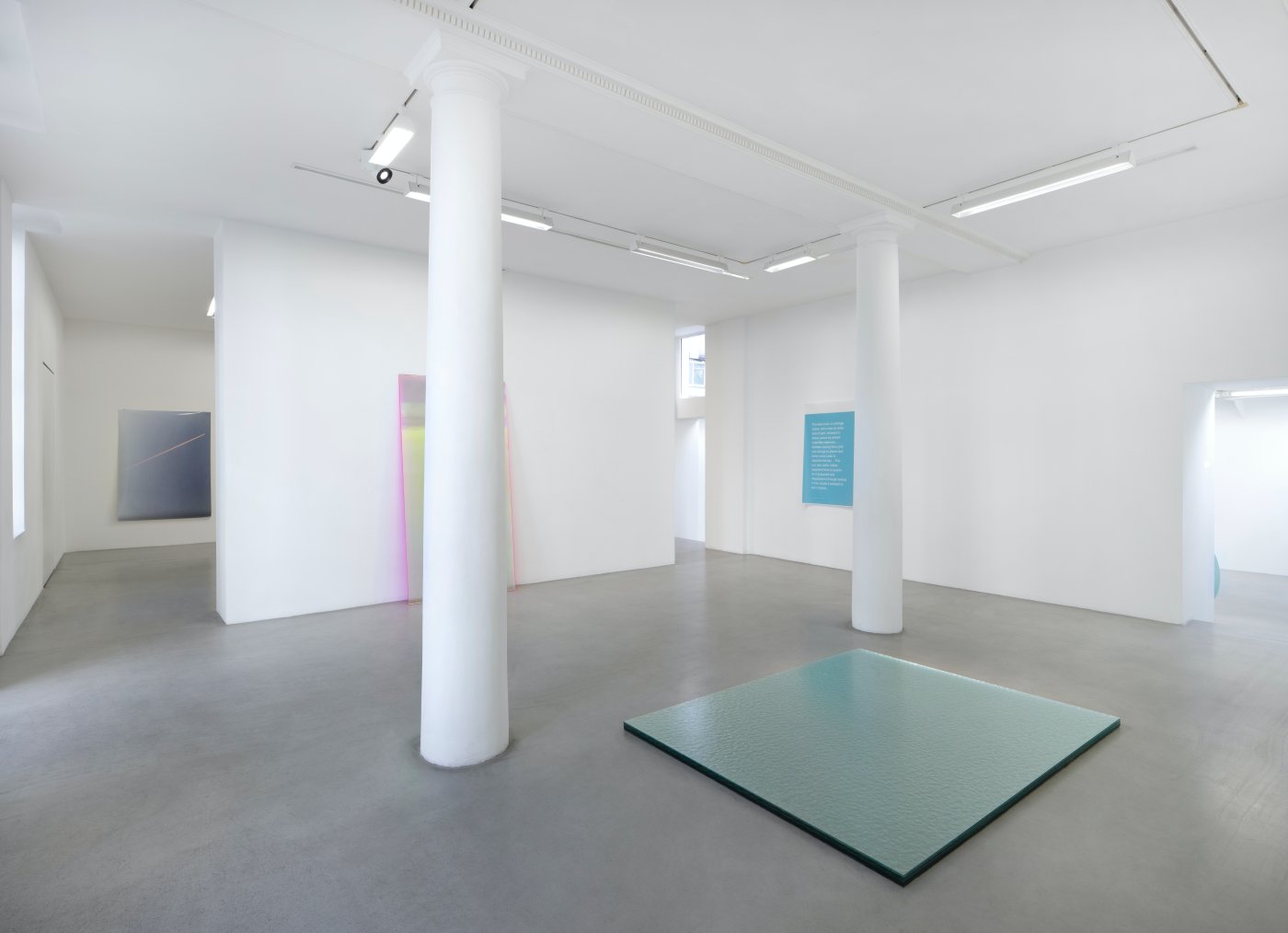 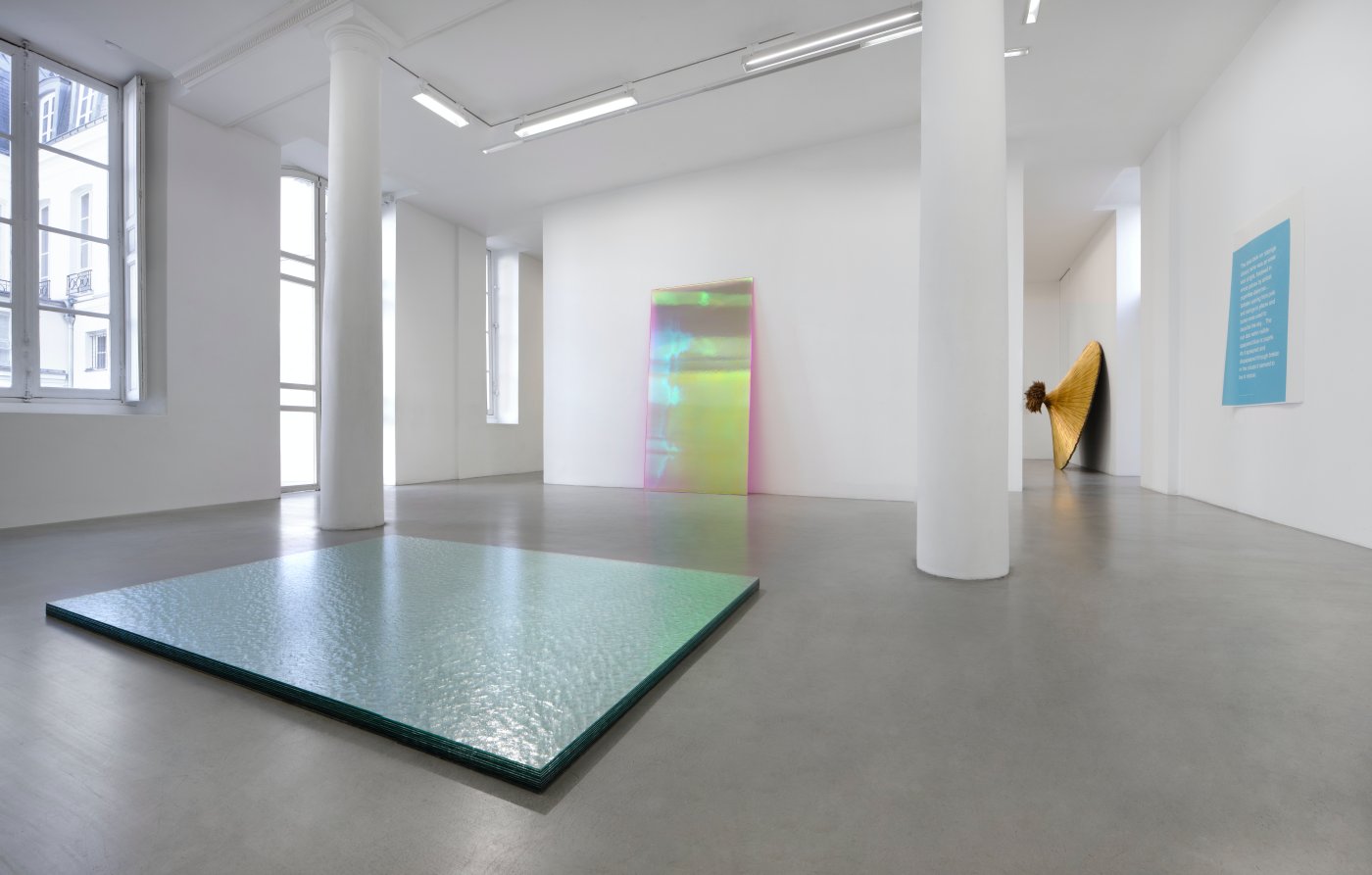 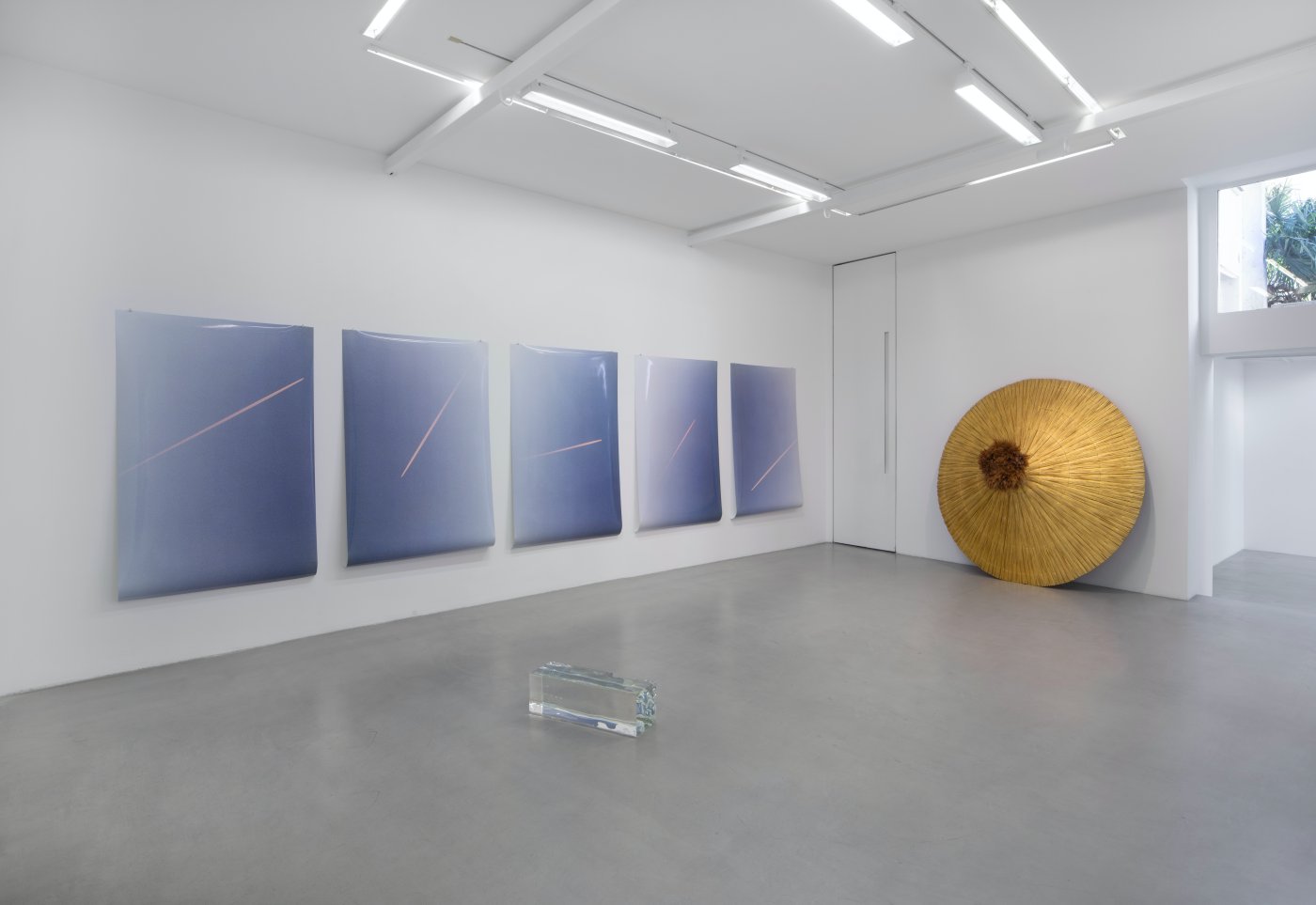 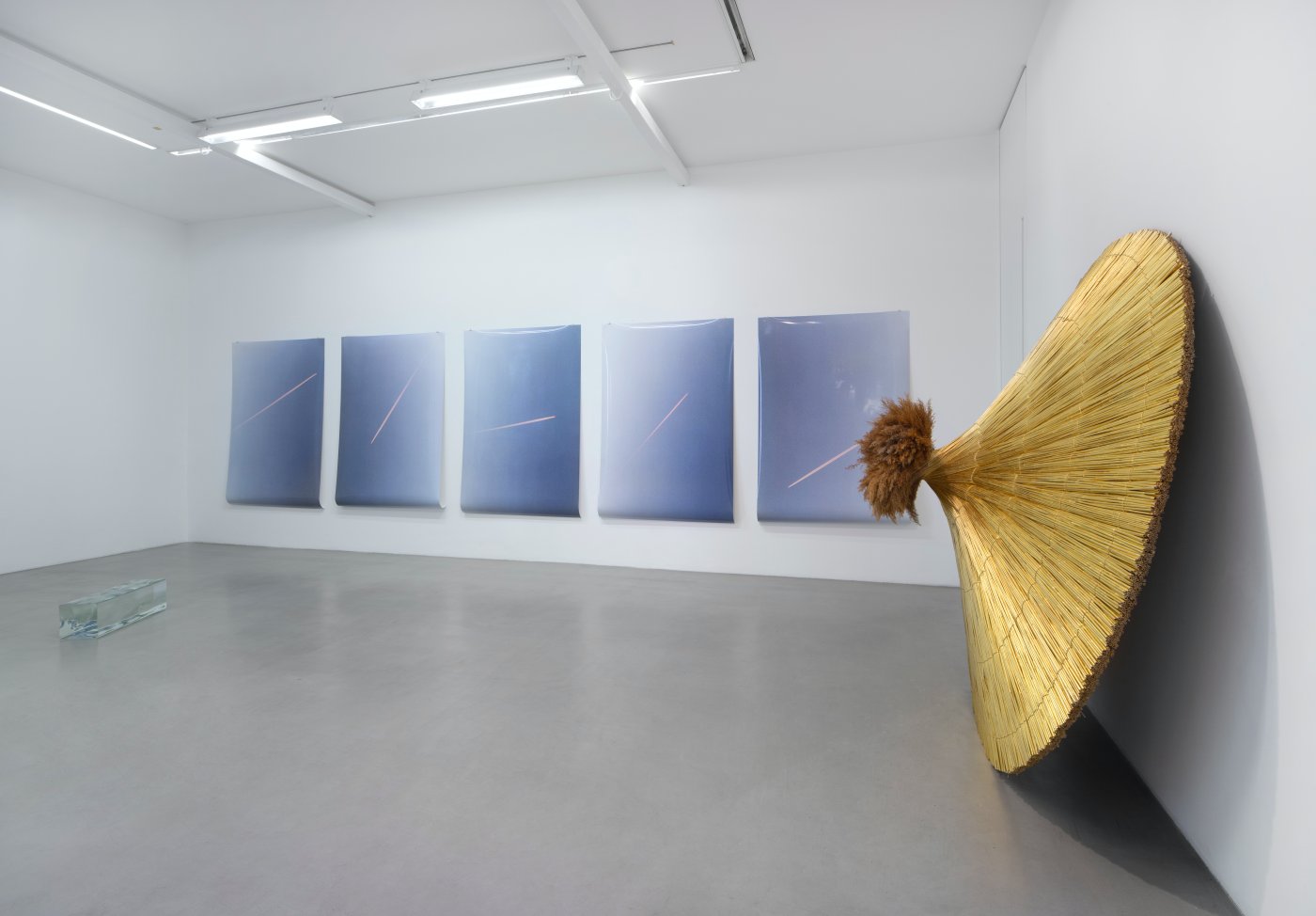 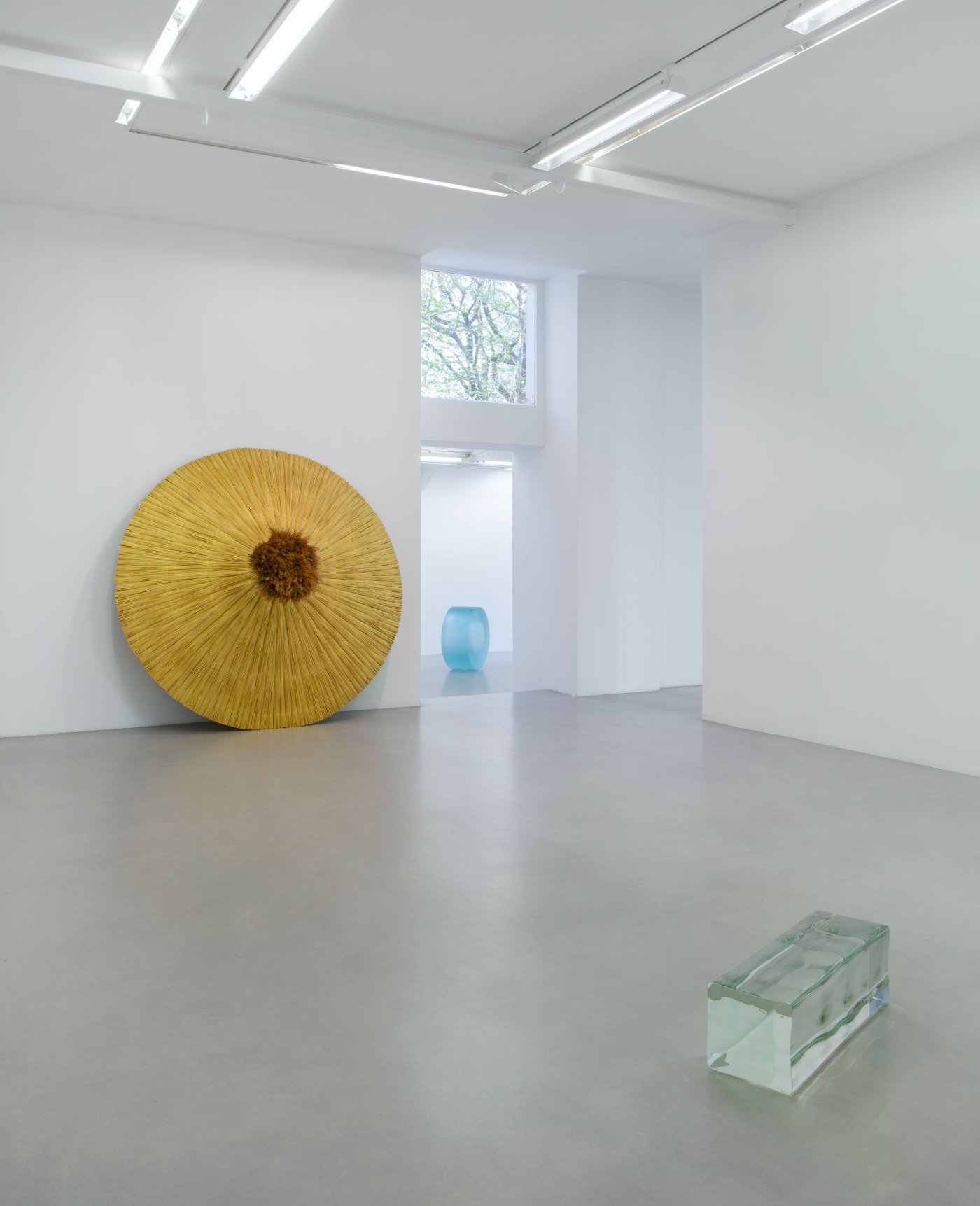 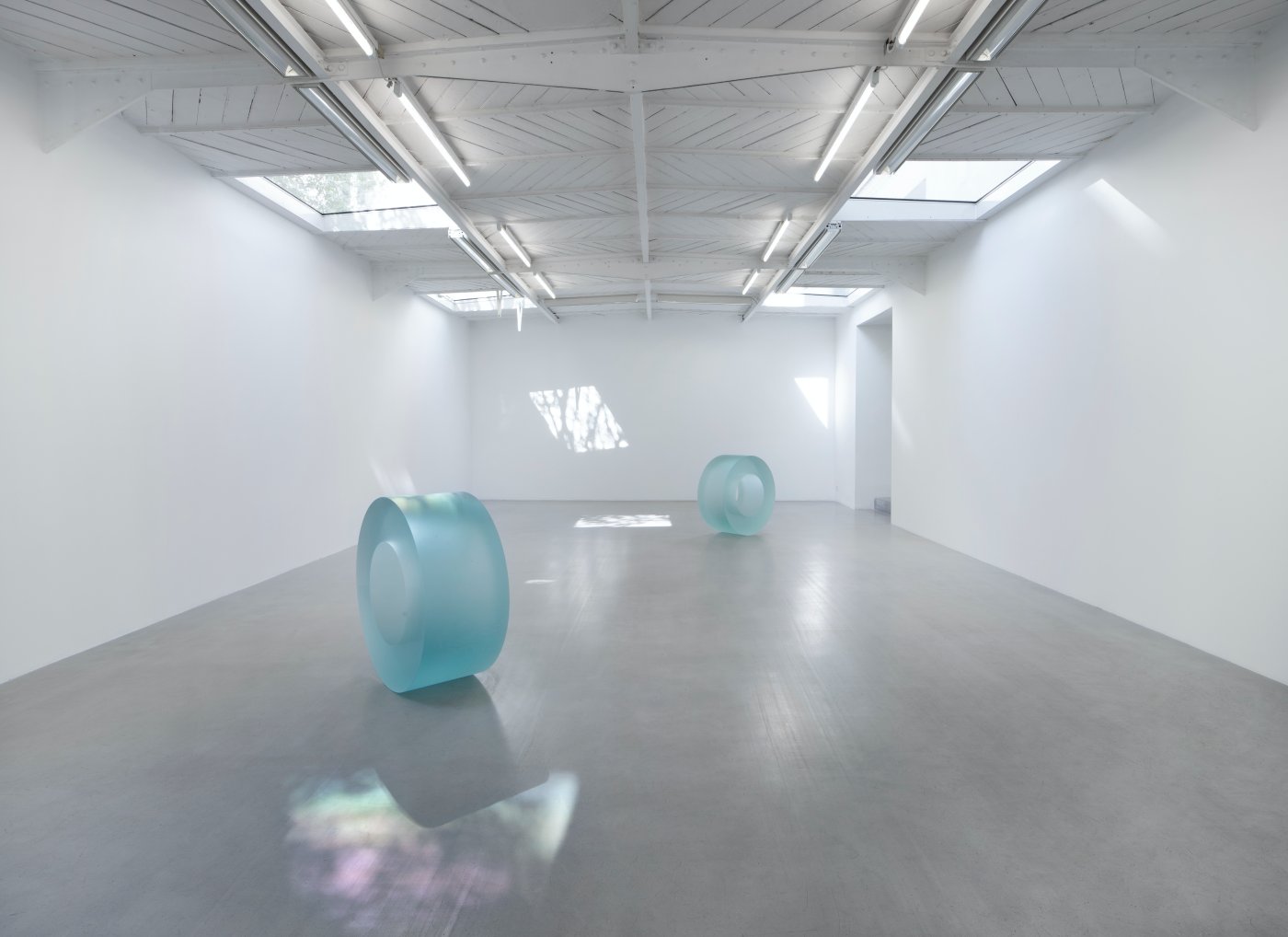 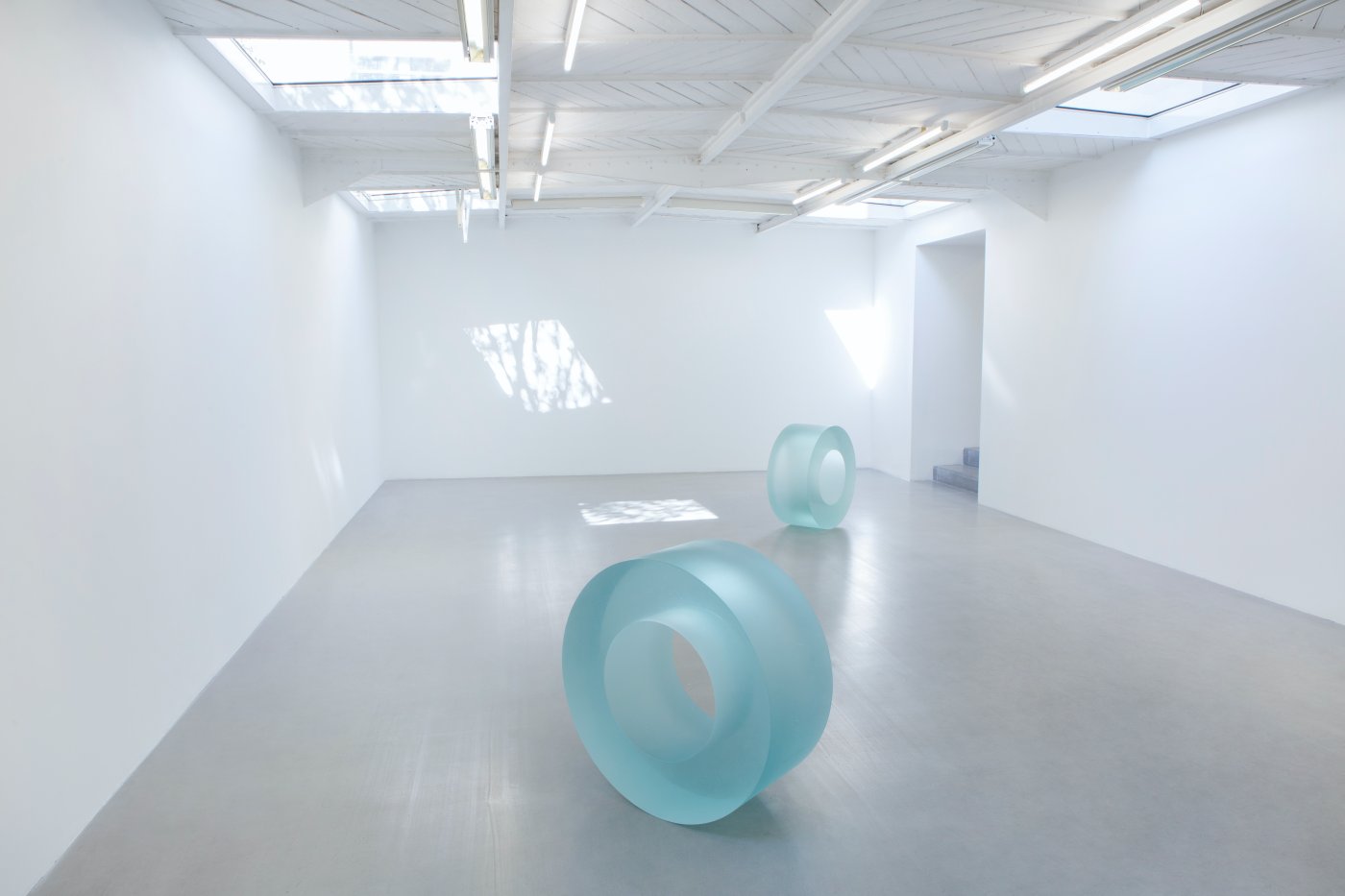 ‘There’s no secret, I’m in the world’s mysteries,’ (2) says Ann Veronica Janssens, speaking about her way of creating by ‘infiltrating rather than imposing herself.’ There are no arcana, nothing prodigious about it. Her works simply insinuate themselves into matter, acting like a developing fluid for colour, light, movement, spacetime… Her works unveil the magic of the real, playing on its waves, stirring our deepest perceptions. Kamel Mennour is pleased to present the third solo exhibition of this internationally renowned Belgian artist whose mists of coloured light have already left their mark on art history (Fantazy, 2013, for instance).

For this new exhibition, ‘airs’, Janssens is setting in motion a space voyage in which works and void resonate with the Universe, the Earth, the Sun, and humanity. Shifting scale from the infinitely large to the infinitely small, each visitor will enter into the exhibition in his or her own way, following his or her own sensibility. And the most precious works are sure to be the inner perceptions produced and shaped through the experience of the exhibits.

The voyage begins with The Skeis… woops: ‘The skies’. Here an early twentieth- century text describes the coloured chaos of the sky after a huge fire. It’s green, orange… a whole range of colours except blue. Janssens intensifies this chaos through the disorder of the letters of the text. An English-speaker who reads it will be surprised at the capacity her brain has for spontaneously correcting the typographic confusion. The same could be experienced by French speakers in 2012 with a work Janssens presented on a building in Geneva, where huge white neon letters spelled out the sentence: ‘L’odrre n’a pas d’ipmrotncae’. Here too, the brain instantly supplied the correct order. The scriptural chaos of The Skeis… (2019) is like an oracle for the time of the Anthropocene, in which the future of life has become uncertain. The words are like those of an ancient Oracle telling the future in riddles we are required to interpret. In the next room, a series of photographs on high gloss paper, 5 Lines of Pink in the Air, Randomly (2020), are similarly evocative of the omens for good or ill augurs used to read in the flight of birds. With the slight difference that these traces of pink sunset randomly drawn through the clouds have been produced by aeroplanes, by artefacts whose carbon footprint pollutes the air and impacts the fate of the planet. What do these lines cut through water vapor tell us? One thing is sure, they open up an infinity of space, drawing lines of chance through a Universe that we know is continually expanding by ‘5-10% every billion years’. (3) The void, intergalactic space are expanding, the Universe is not static. Everything is movement. Even the Sun is approaching its death in about five billion years. (4)

For now, the solar star is our friend, even if it can also be a burning enemy. Placed on the floor against the wall, the thatch roof, which in some traditional houses is called “the sky of the house”, is shaped like a shield. It’s an interface between the Sun and humanity, like the umbrellas, blinds, and hats that one finds in a number of Janssens’ works (Californian Blind, Venetian Blind, Chapeau (Stetson)…) All of them are ready-mades covered in gold leaf and radiant with light waves. The thatch roof (Umbrella, 2020) is a new interface in Janssens’ body of work, but she has been interested in thatch for a long time.
There is in a back-and-forth movement between floor and air running throughout the exhibition. Horizontal sculpture has played a central role in Janssens’ investigations over time (Anvers-Kinshasa-Humlebæk, 2012-2020, Untitled (Blue Glitter), 2015, etc.). Atlantic (2020) is a new iteration made of layers of relief-printed glass plates. Water seems to undulate within it. There is perhaps an echo of the American minimalist Carl Andre here, whose innovation was to lay his sculpture 144 Tin Square (1967) flat rather than vertically, an art historical shift that came to Andre as he was kayaking (5).

In another room, two rolls of cast glass are also riveted to the floor. The cylinders of Blue Glass Roll (2019) are alone in the room, accentuating the emptiness of the space around them. They each weigh 357 kilos, which with the earth’s gravity makes them impossible to lift. ‘And yet you only need to flick them and they will roll.’ (2) Roundness plays on gravity and time has left lightness within the very matter of weight. During the long period the glass took to set, air bubbles formed in it and tried to escape. Some managed to, while others remained trapped, and now contain ‘a piece of the cosmos’…(2)
The exhibition ‘airs’ is a poetic laboratory where weight and weightlessness, movement and gravity mix with space and time, opening again and again onto the wonder of being in the world. And the space voyage doesn’t stop there. It will continue this spring 2021 in the Pantheon in Paris, where Janssens will set the magisterial neo-classical architecture into motion through a series of vertiginous reverberations and diffractions around Foucault’s Pendulum. There will be yet other kinds of resonance at work there.

Born in 1956 in Folkestone – UK, ANN VERONICA JANSSENS lives and works in Brussels, B.
Her work has been the subject of numerous solo exhibitions: at the South London Gallery in London–UK and at the Louisiana Museum in Humlebæk–DK (2020); at the De Pont Foundation in Tilburg–NL, at the Kiasma Museum in Helsinki–FL, at the Baltimore Museum of Art–USA (2018); at the Institute of Contemporary Art in Villeurbanne–FR (2017); at the Nasher Sculpture Center in Dallas–USA (2018), and at the SMAK in Ghent–B (2015).
In 2003, she participated in the exhibition “Aux origines de l’abstraction. 1800-1914” at the Musée d’Orsay in Paris, with the proposal Red 106 – Blue 132. In 1999, she represented Belgium at the 48th Venice Biennale with Michel François and her work has been part of many other international biennials such as Sharjah Biennial–UAE (2019); Manifesta 10, St Petersburg–R (2014); 11th and 18th Biennales of Sydney–AUS (1998-2012); Manifesta 8, Murcia – ES (2011); 5th Seoul International Media Art Biennial, KR (2006); 5th Istanbul International Biennial–TR (1997) and 22nd São Paulo International Biennial–BR (1994). She has also collaborated on several occasions with choreographers such as Pierre Droulers and Anne Teresa De Keersmaeker. Since 2009, she has also initiated with Nathalie Ergino the “Brain Space Laboratory” of the Institute of Contemporary Art of Villeurbanne, an interdisciplinary project that brings together the reflections and experiences of artists and scientists.
Since 1985, she has participated in major group exhibitions such as “Shifting Spaces”, Hayward Gallery, London–UK, “Le musée absent” in Wiels, Brussels–B (2017), “Illumination” at the Louisiana Museum of Modern Art, Humlebæk–DK (2016); “Another Minimalism” at the Fruitmarket Gallery, Edinburgh–UK (2015); “Zehn Räume Drei Loggien und Ein Saal” at the Sprengel Museum, Hanover–DE (2015); “Simple Forms” at the Centre Pompidou Metz–FR and the Mori Art Museum, Tokyo–J (2014); “Light Show” at the Hayward Gallery, London–UK, the Museum of Contemporary Art of Sydney–AU and the Sharjah Art Foundation–UAE (2013-2015); “Dynamo. Un siècle de lumière et de mouvement dans l’art 1913-2013” at the Galeries Nationales du Grand Palais, Paris–FR (2013); “Fruits de la Passion” at the Centre Pompidou, Paris–FR (2012); “unExhibit” at the Generali Foundation, Vienna–AT (2011); “Universal Code” at The Power Plant – Contemporary Art Gallery, Ontario–CA (2009); “Ecstasy, In And About Altered States” at MOCA, Los Angeles–USA (2005); “Natuurlijk” at the Kröller- Müller Museum, Otterlo–NL (2002); “Stimuli” at the Witte de With and Museum Boijmans Van Beuningen, Rotterdam–NL (1999).
The artist’s future projects include in the spring of 2021, and at the invitation of the Centre des monuments nationaux, the conception of a monumental work – 23:56:04 – for the Panthéon in Paris, and in the autumn of 2022 a solo exhibition at the Pirelli HangarBicocca Foundation in Milan.