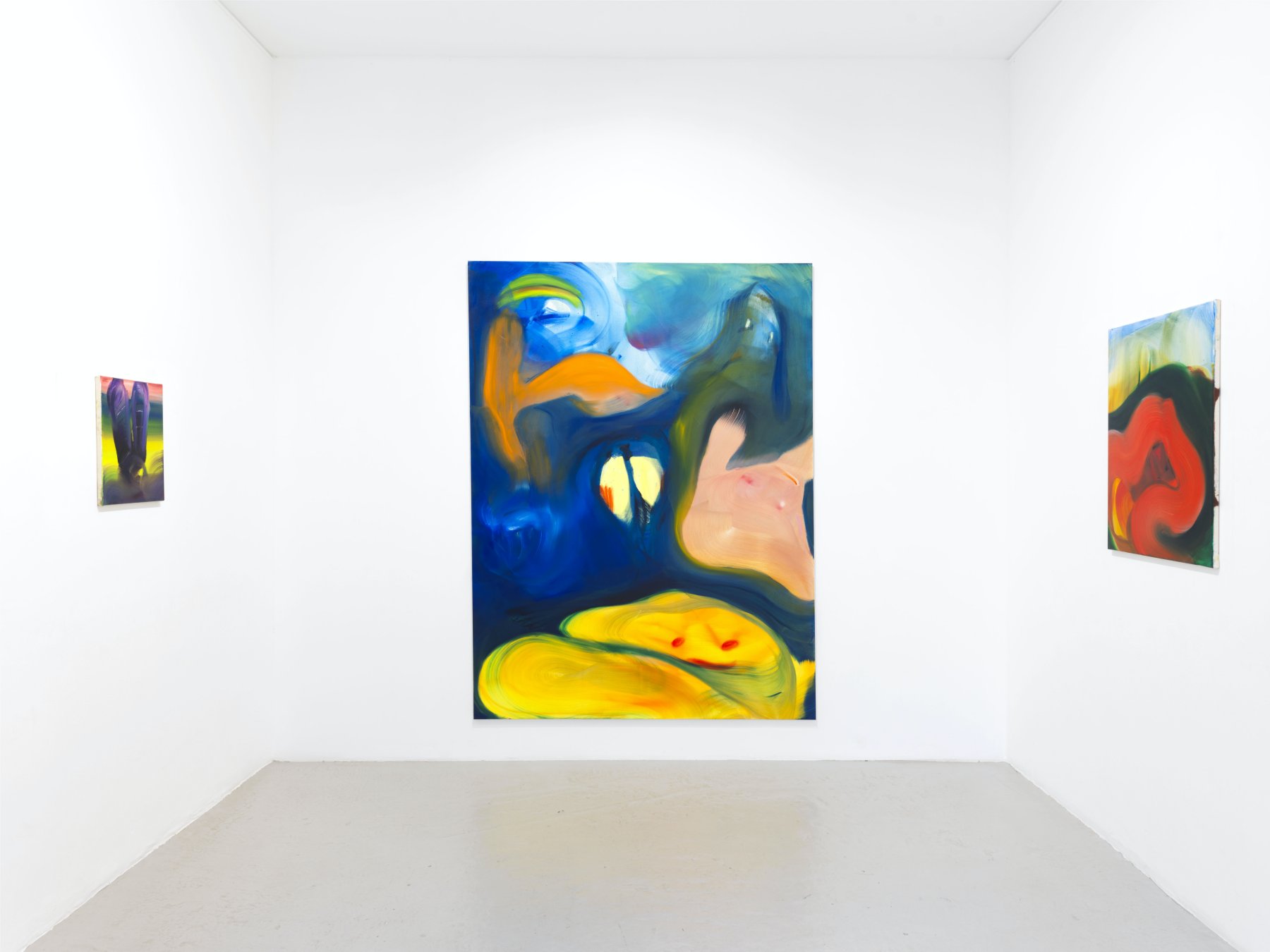 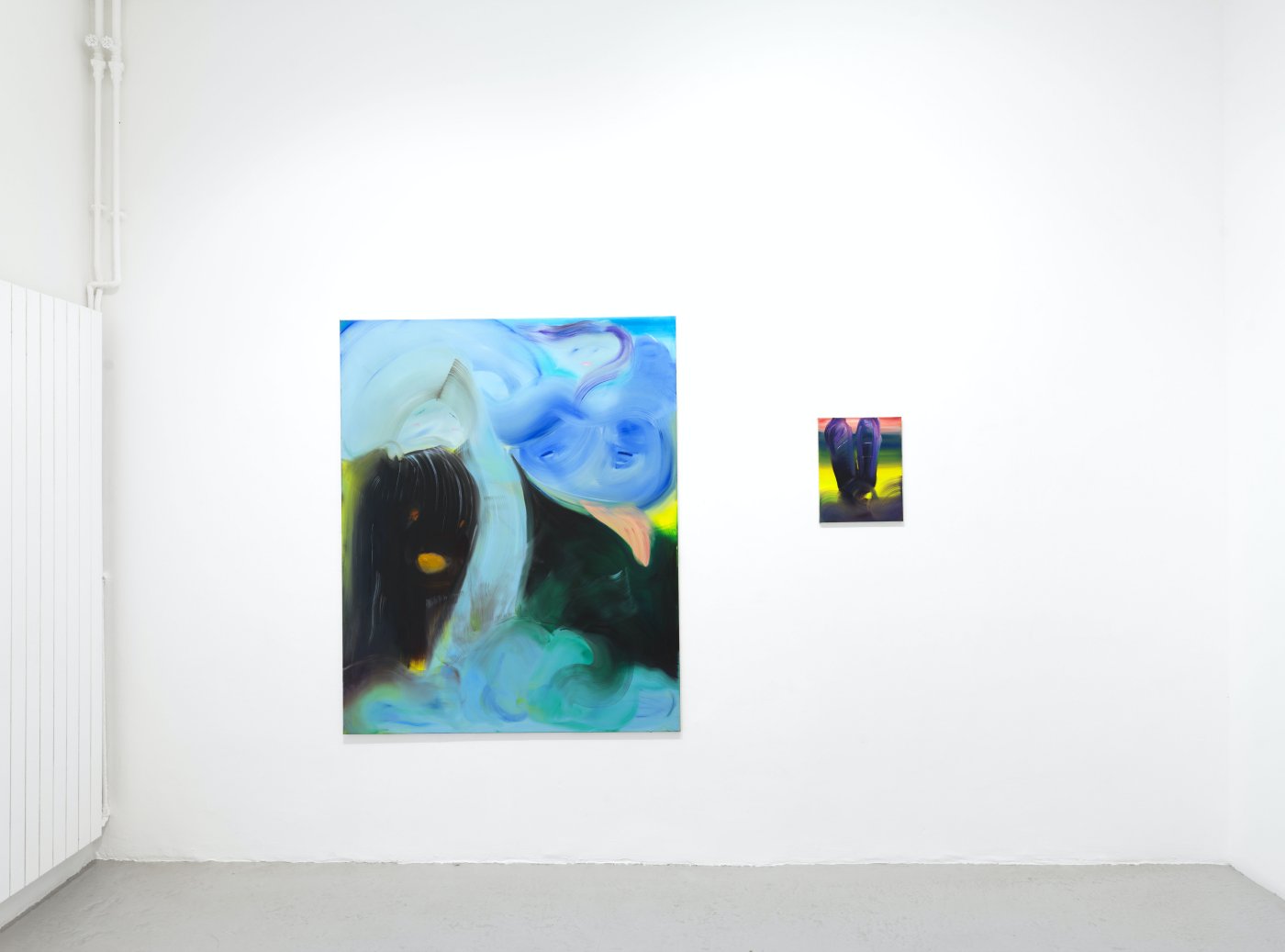 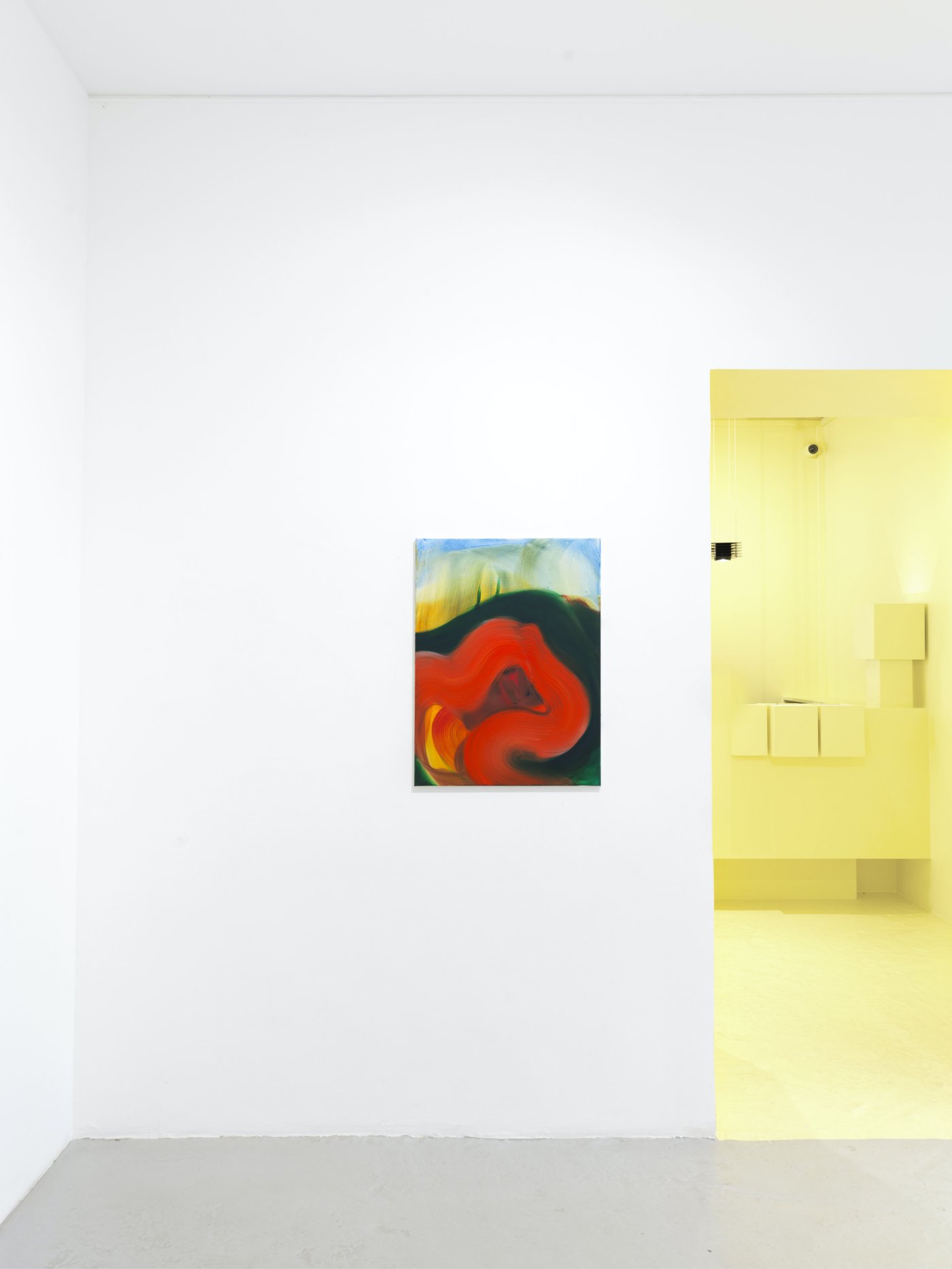 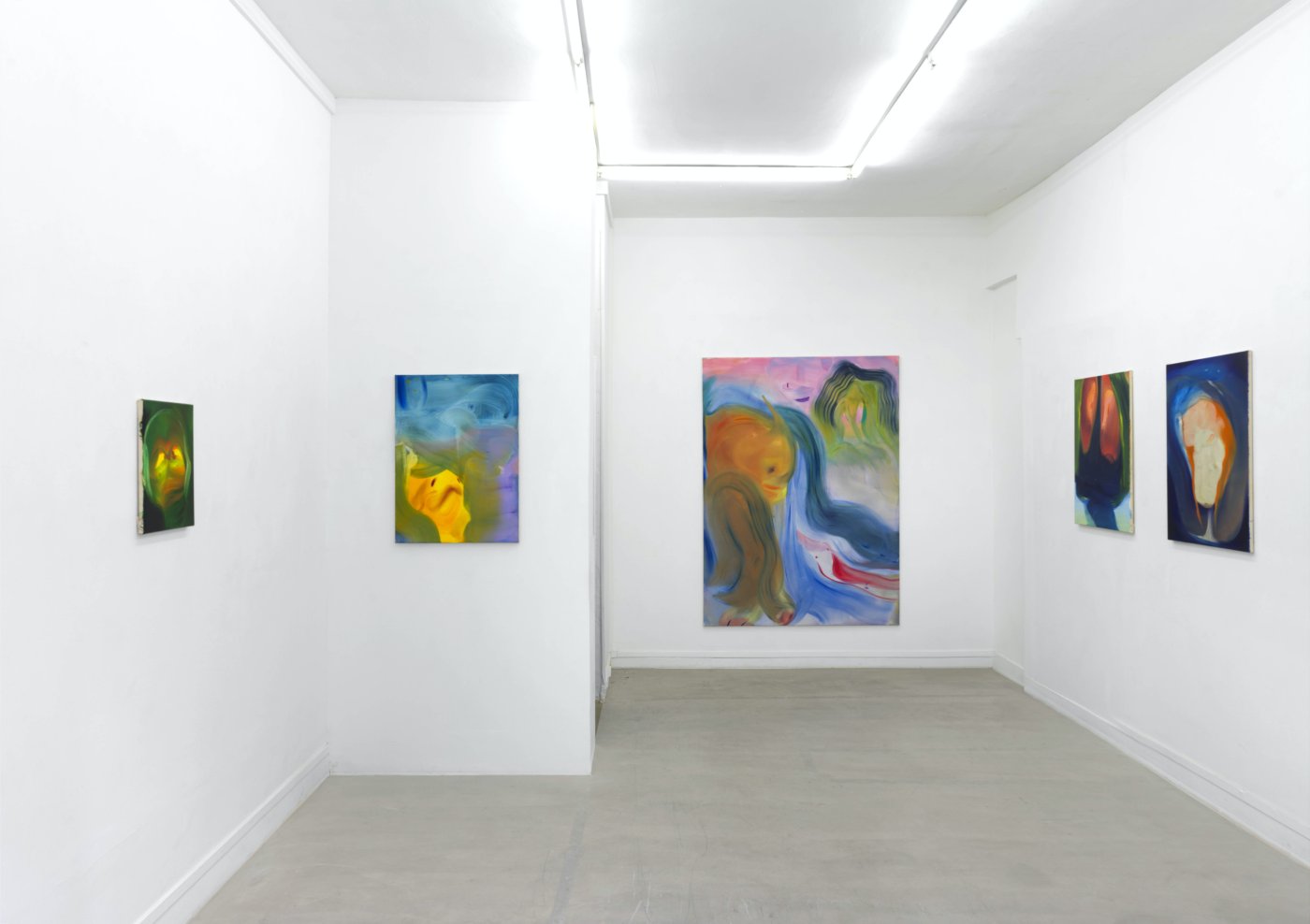 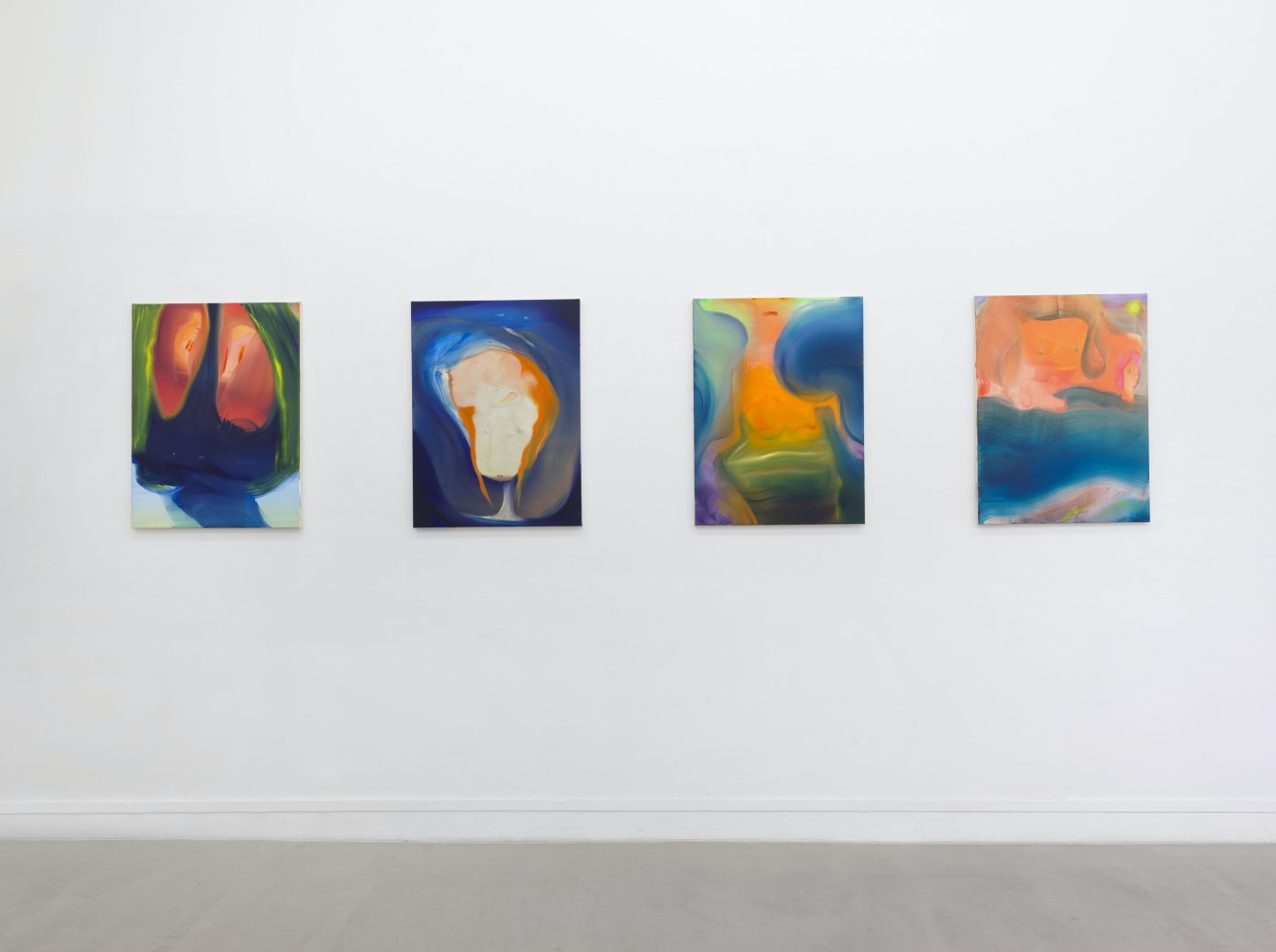 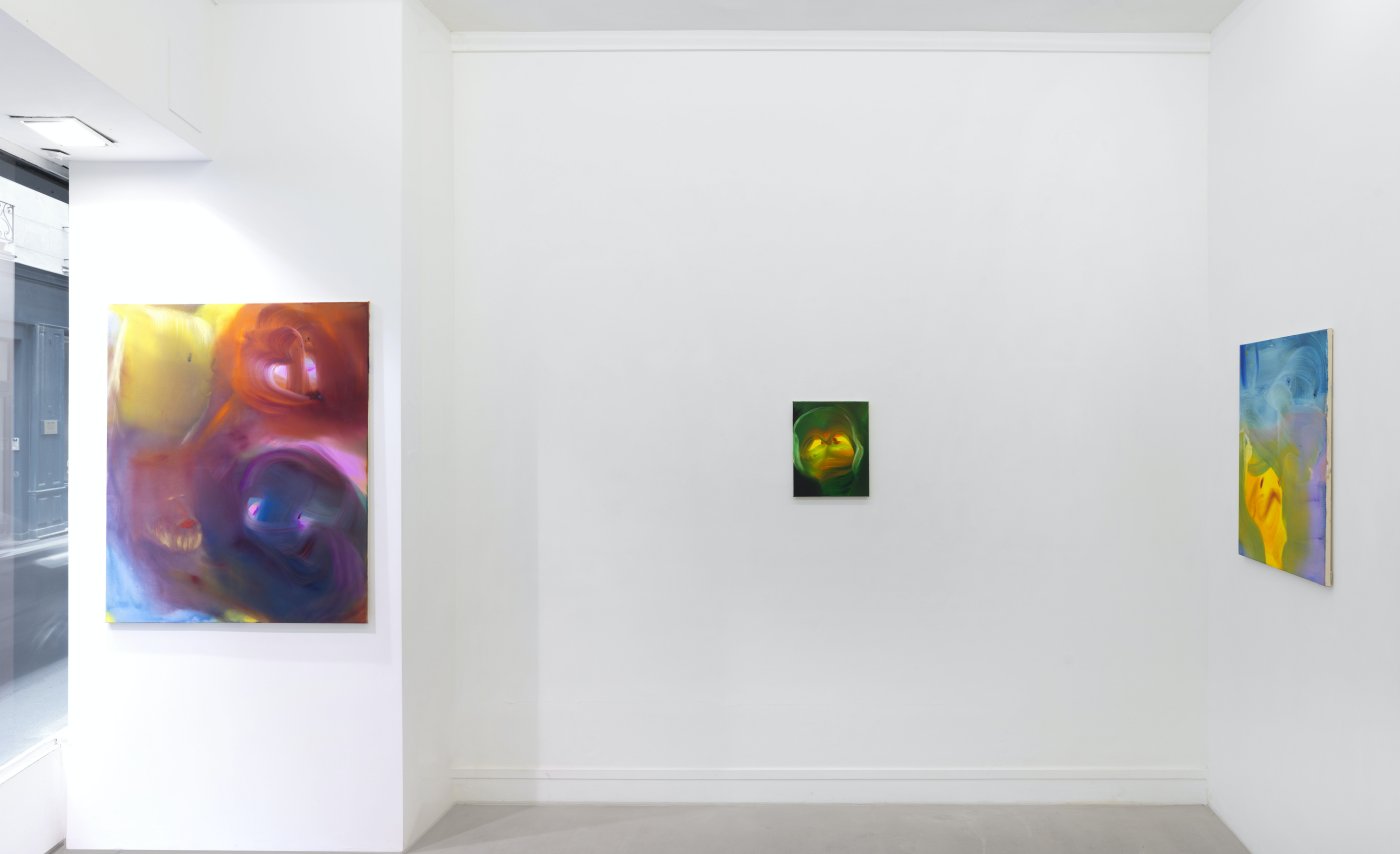 Aneta Kajzer’s paintings teeter between abstraction and figuration. Working with wide brushes and thinned oil paints, the artist uses bold sweeping strokes to mix and mingle jewel-toned hues directly on the canvas. At a certain (if unpredictable) point during her spontaneous mark-making, a subject reveals itself. A face, a body, a fish, or even Darth Vader will emerge from the gestural brushwork and, just like that, wrest the composition away from pure abstraction. Likening her own intuitive process to a cloud-watcher who finds real-world likenesses in overhead accumulations of water vapor, Kajzer literally and figuratively conjures humanoid creatures out of what Michel Tapié described in the 1950s as l’Art informel.

The works comprising Kajzer’s first solo show at Semiose, “Heavy Water,” include large and small formats whose titles hint at the representational imagery lurking within. In Alien Pool (all works, 2021) an elongated feminine form with a slender neck, drooping breasts and a mushroom-shaped head appears to be floating peacefully in blue-green water. Guiding the viewer to see the extraterrestrial being that revealed itself to her as she painted, Kajzer has added subtle but deliberate daubs of red paint denoting two eyes, a mouth and nipples. Similar simple marks—dots, smears and even small scratches—encourage anthropomorphic interpretations through the works on view. In Evil Twin the artist used her fingernail to scrape away the top layer of paint from one of two eggplant-like forms, revealing a pair of slitty blue eyes. Thin strokes of pale pink suggest the twins’ displeased grimaces. Seemingly minor in the context of the overall compositions, these precise final touches christen and crystallize the vague figures born out of Kajzer’s automatic painting.

The faces and bodies in Kajzer’s paintings are undeniable, but also appear frail and transient. So approximate are their features that they seem perpetually on the verge of dissolving into facture, thus quashing the painting’s figurative status. This visual instability is reinforced by a peculiar blend of humor and melancholia that emanates from the compositions. If Kajzer’s paintings initially come across as naive attempts at figuration using bright colors and thick brushes (sometimes as wide as a broom), the artist’s references to malaise and liminality add a level of sophistication and depth. In Happy Holidays two girls with princess Leia-style hairdos appear to be up their necks in a murky ocean while a tiny acid-green sun shines down on them through a muddy sky. The girls are cute, but something is clearly awry. Their wide faces and piercing eyes recall the devilish nature of Japanese painter Yoshitomo Nara’s young and deviant Anime-inspired protagonists. The sickly sun and the fact that the girls seem close to drowning brings an unexpected gloominess to this work’s ostensibly cheerful titular phrase. Rife with these sorts of visual and thematic contradictions, Kajzer’s paintings describe a universe where standard binaries no longer pass muster: abstraction is figurative, automatism is reflective, and happiness is apocalyptic.