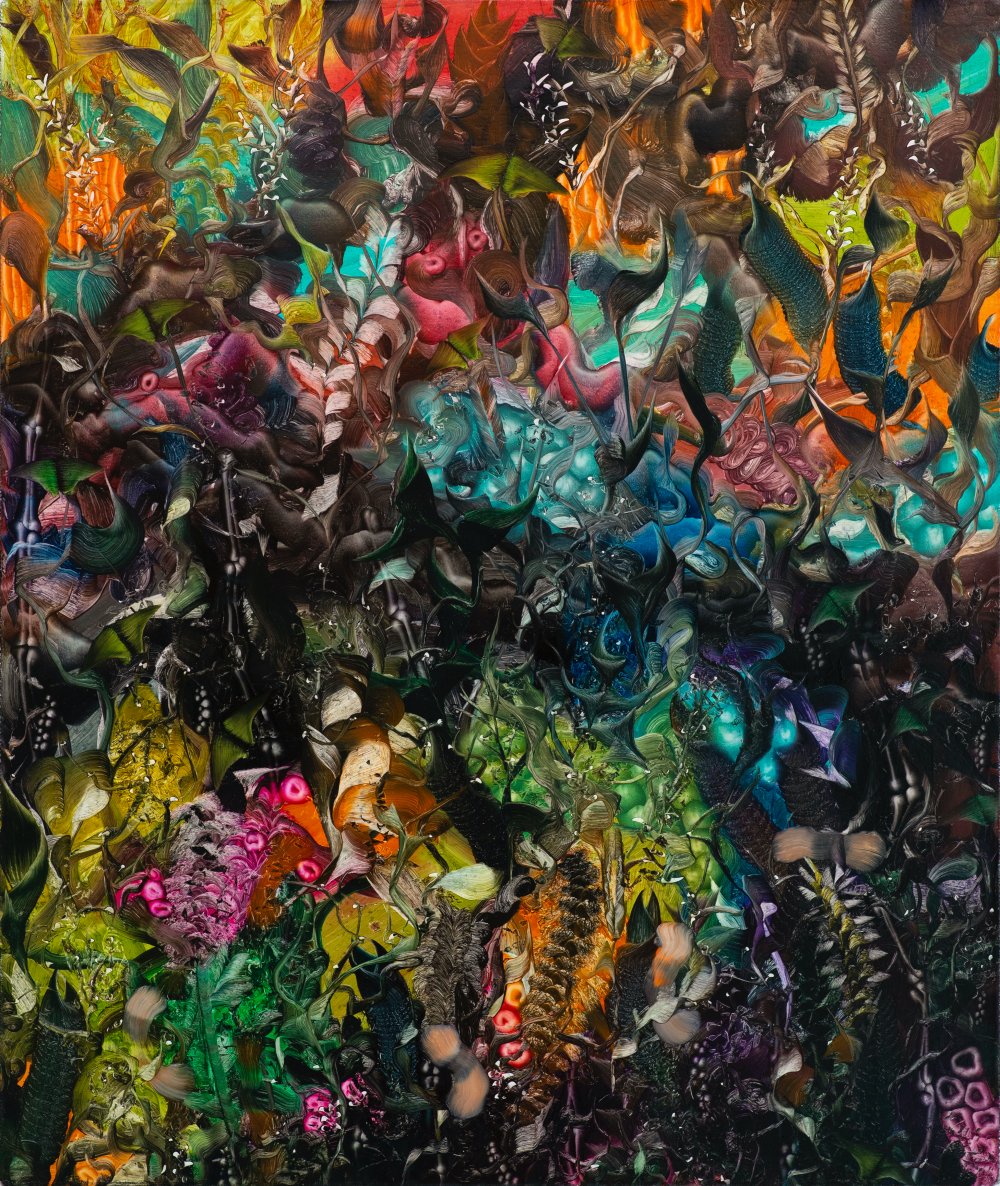 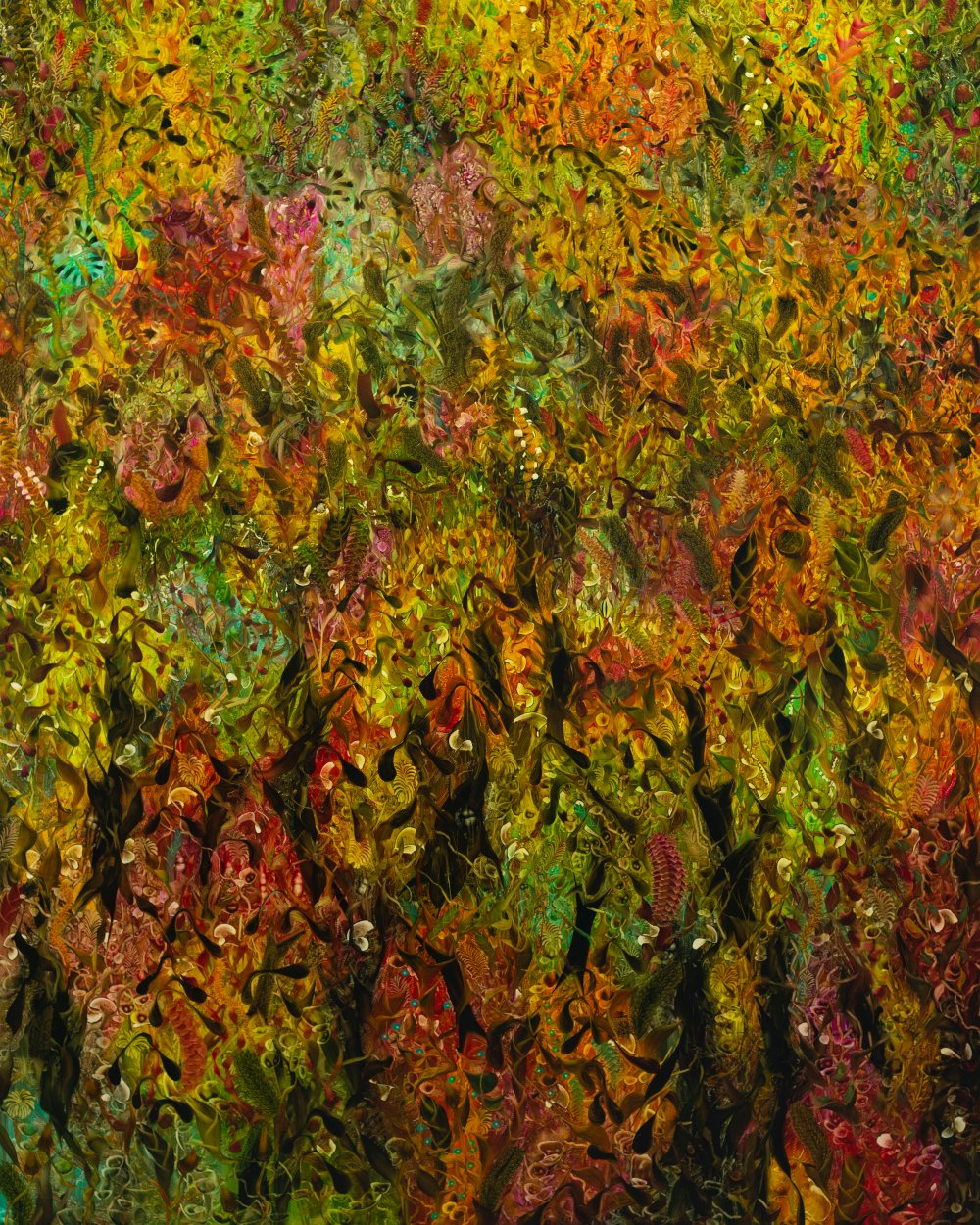 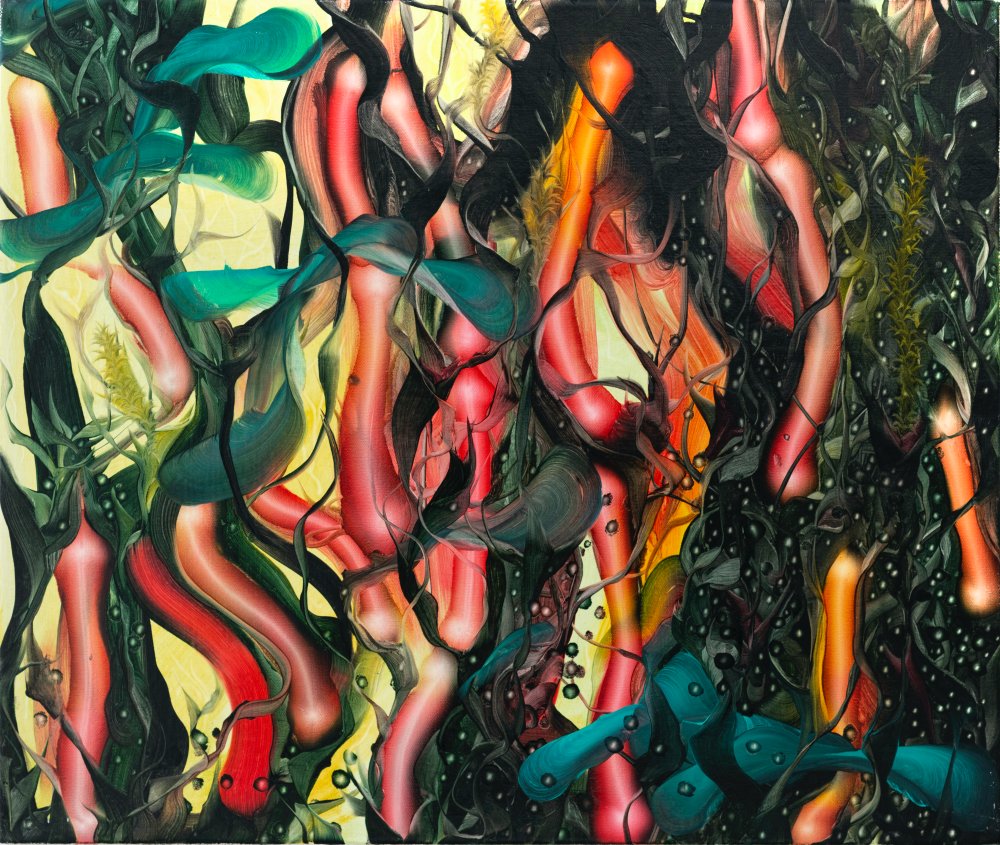 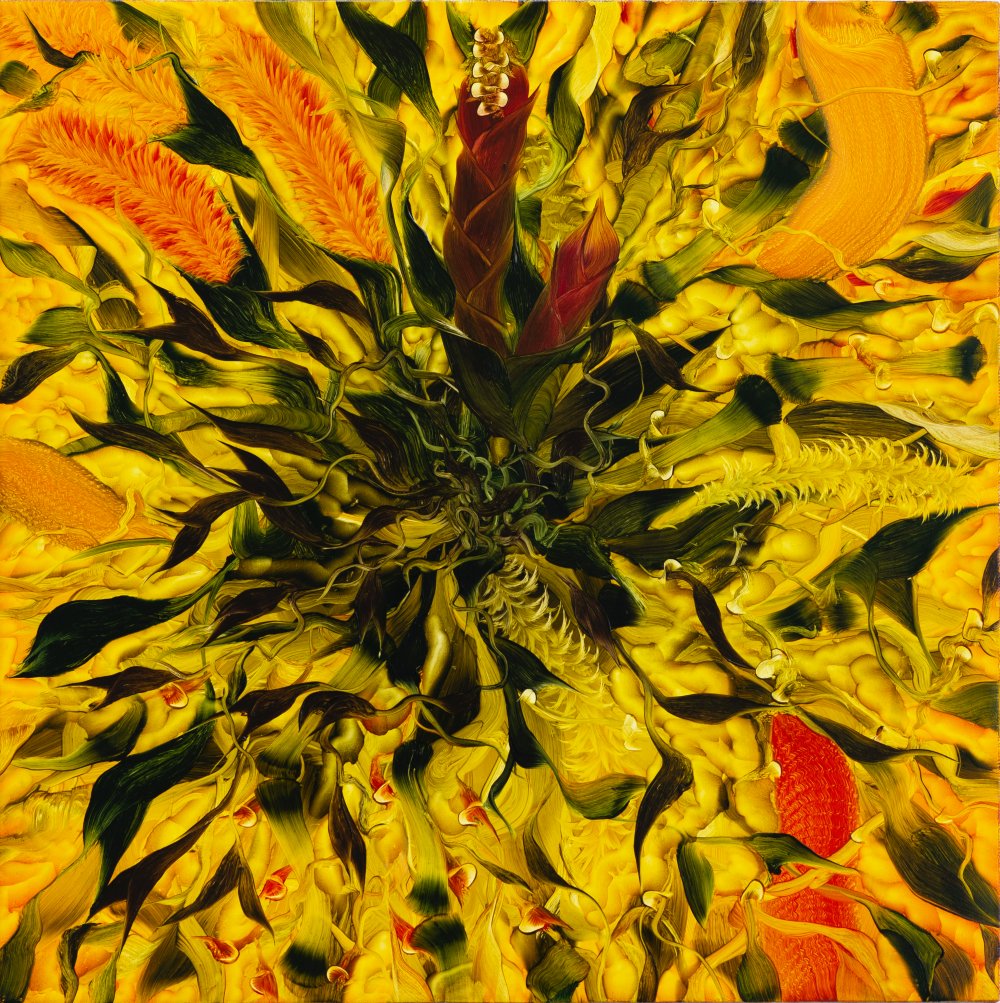 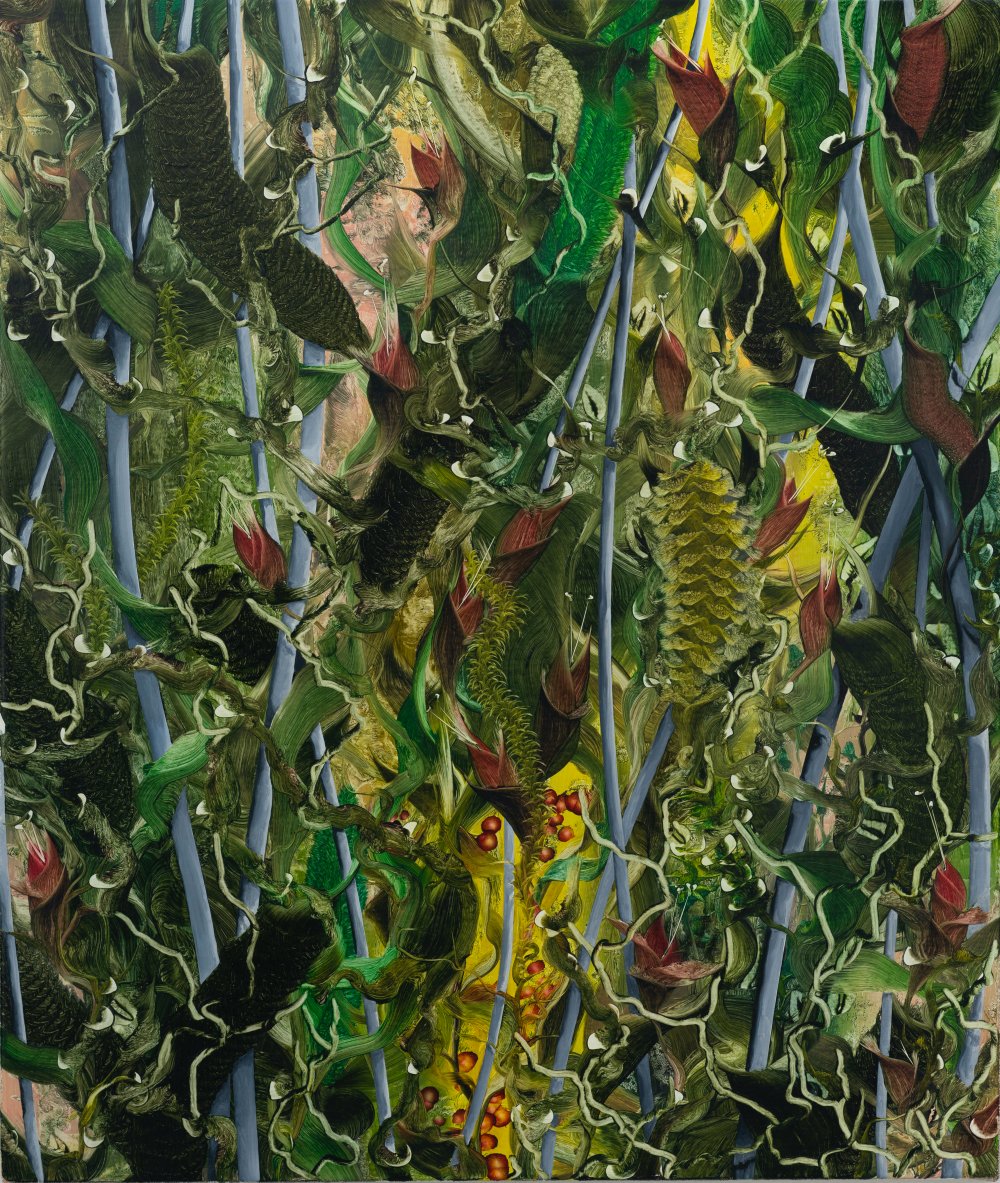 Andy Harper
Amidst, Oil on canvas 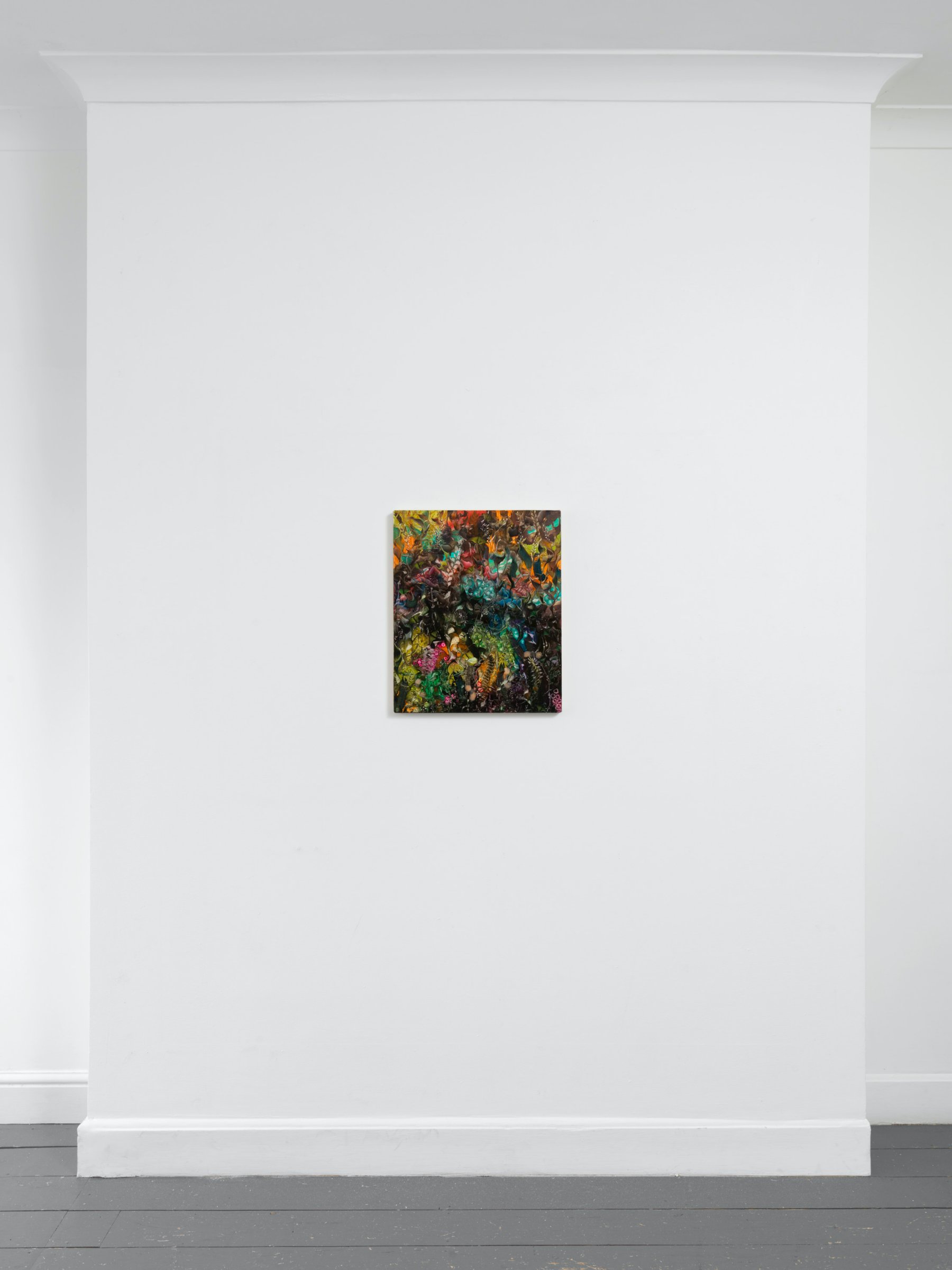 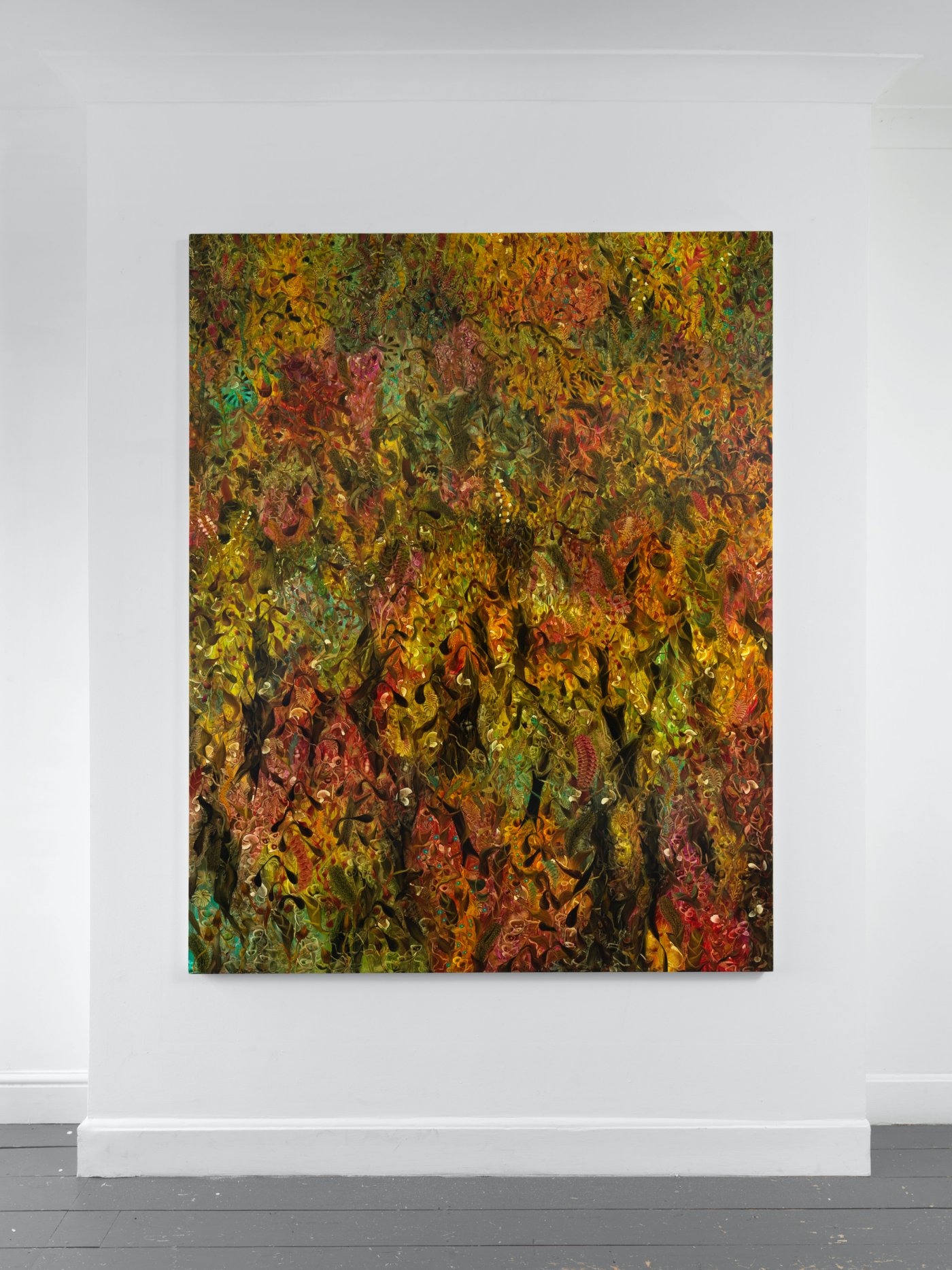 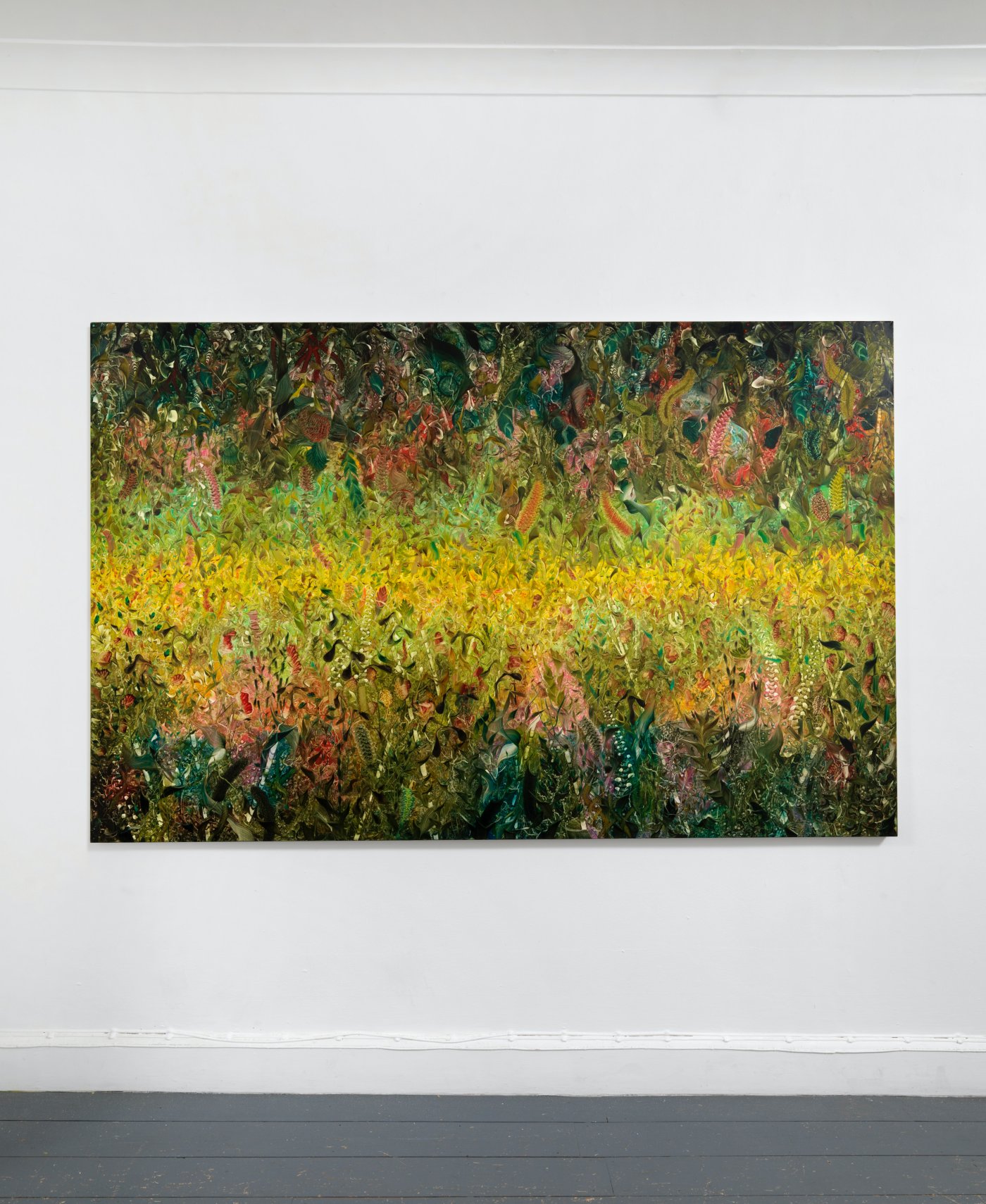 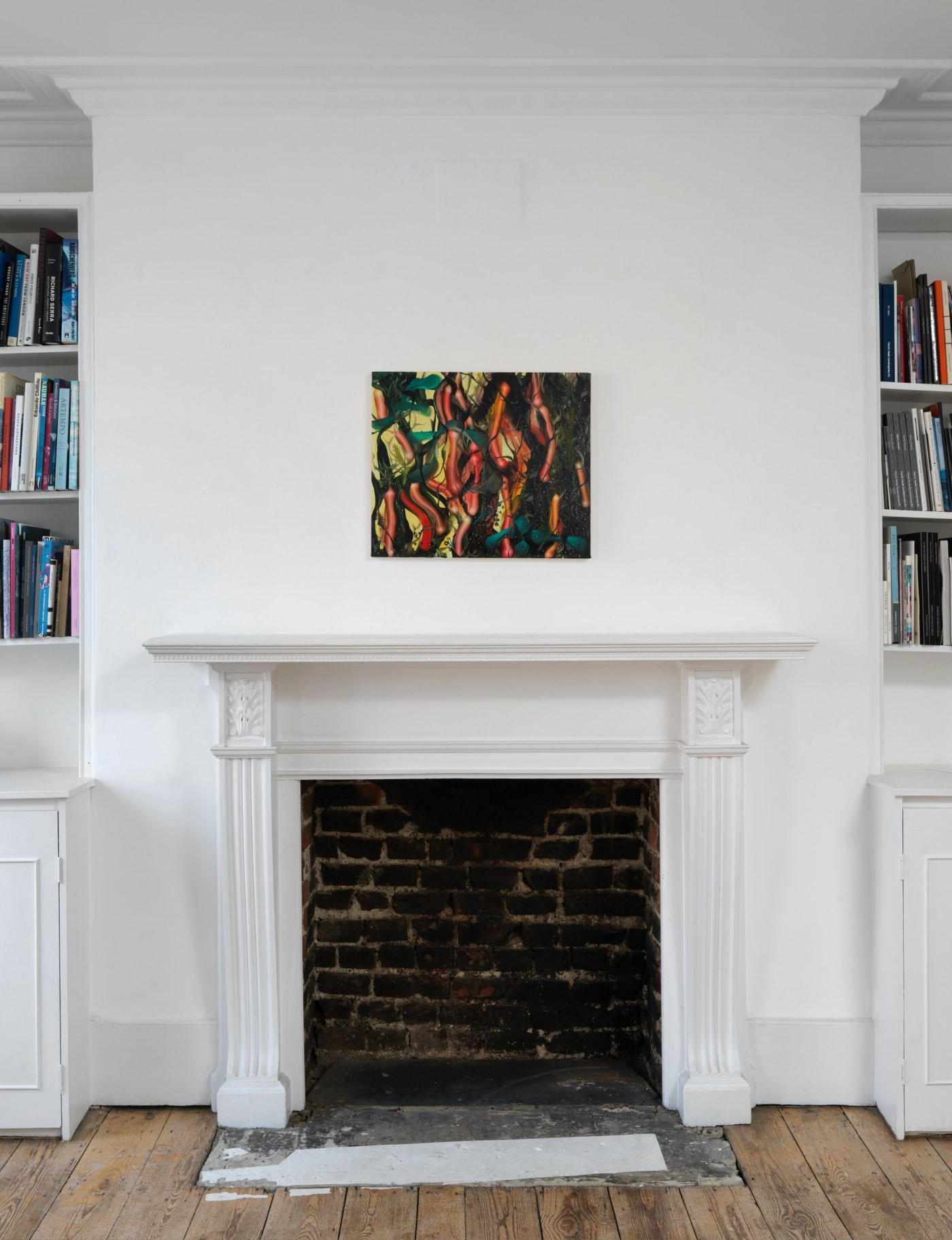 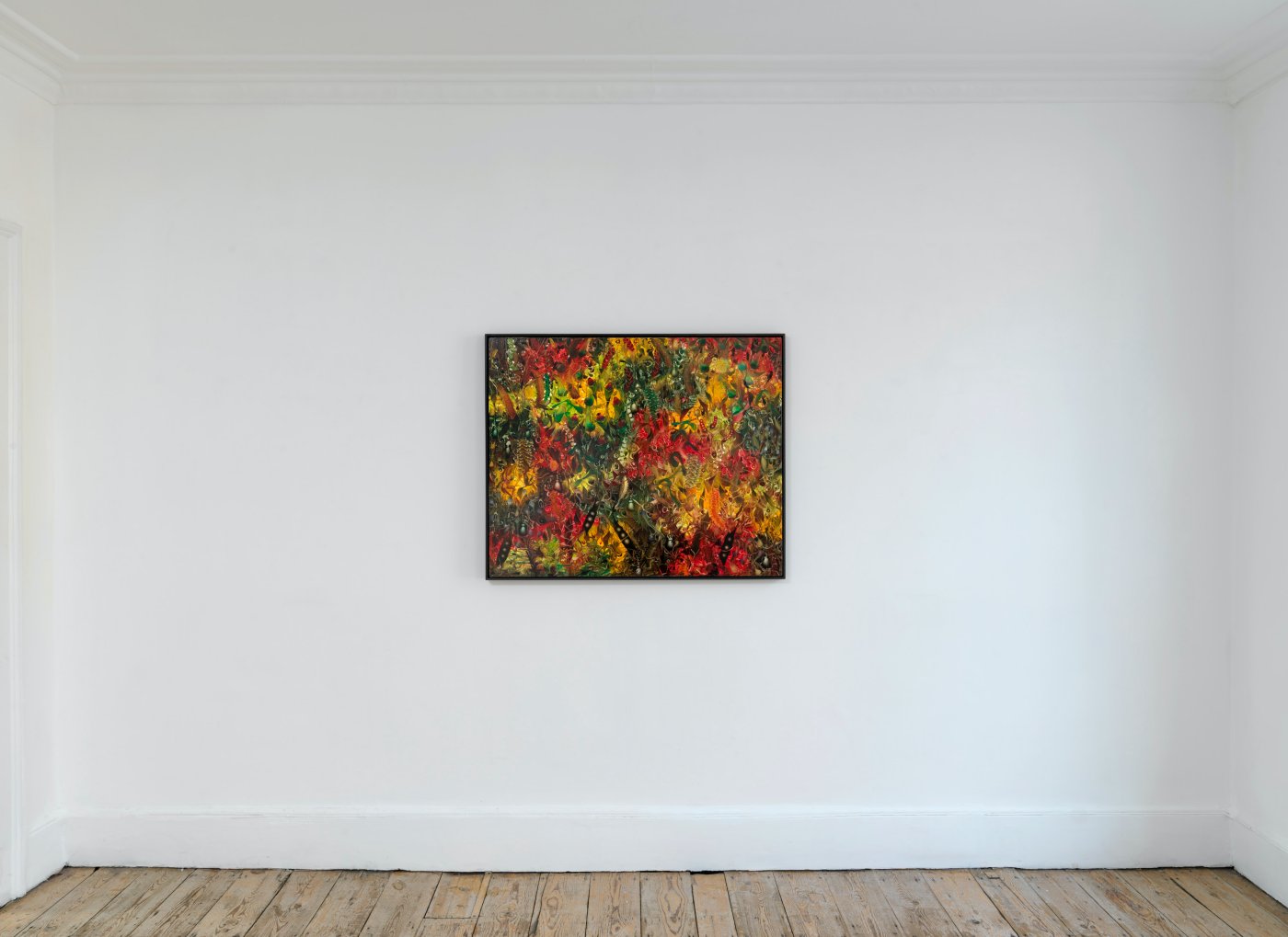 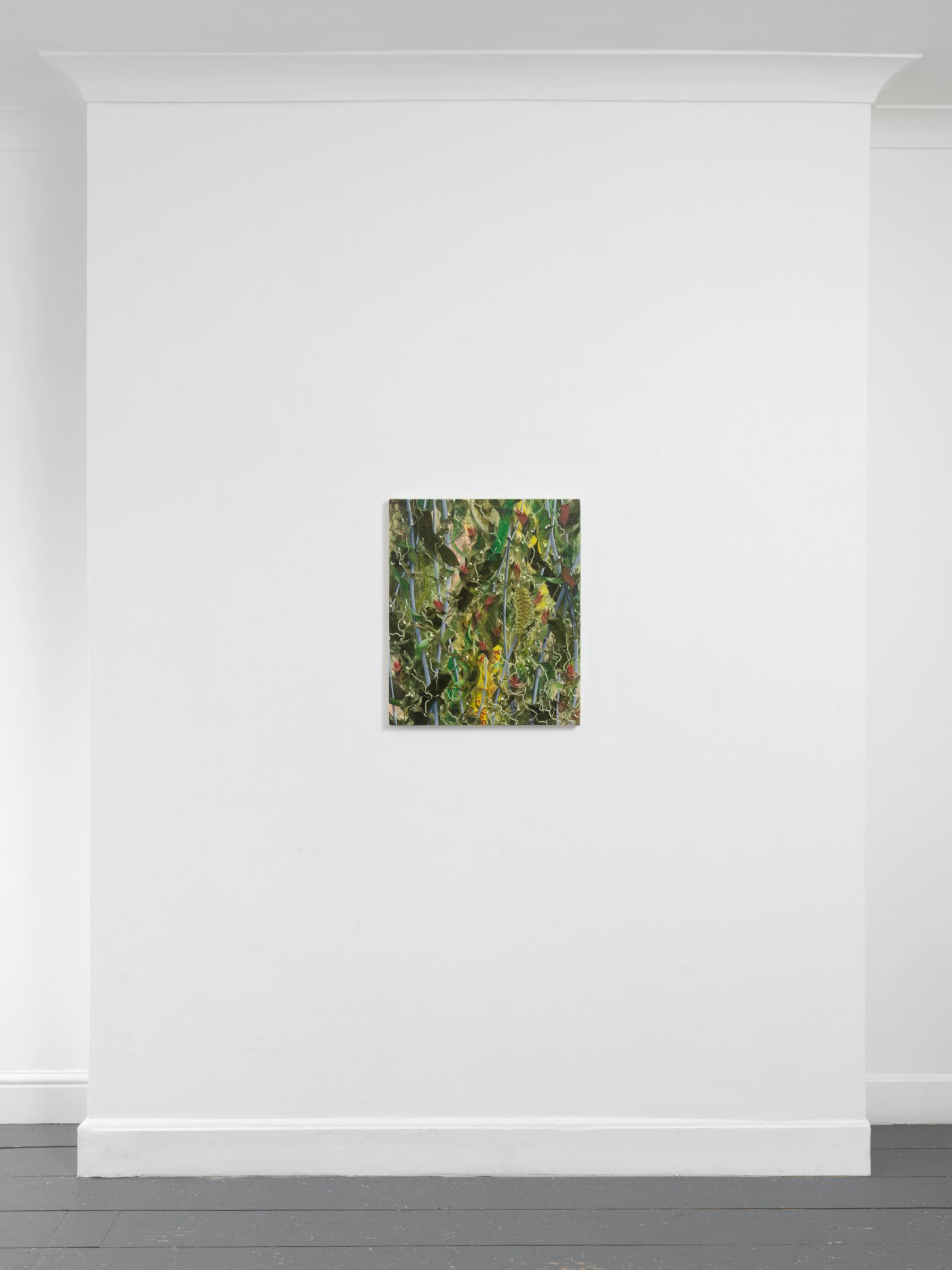 Both Andy Harper’s show and the biggest painting in it take their title from Leo Lionni’s 1976 cult book ‘Parallel Botany’: a field guide to imaginary plants, presented with the appearance of academic authority – complete with illustrations and apparently rigorous references. That points to one interpretation of Harper’s lushly intricate paintings: that we are looking at unreal vegetation, so profuse it has crowded out the full space of the canvas, so heightened in colour it takes on a psychedelic aura – Harper says the acrid hues aim ‘to court the magical’, but accepts that they may register as sublime or ridiculous. And plant life is certainly in the mix: Harper’s father is a keen gardener, and he remembers being struck by the promenades of semi-tropical plants lit by coloured lights when he was a boy in Torquay.

Yet it is perfectly possible to find alternatives. Some forms look like feathers, some like shells. The overall effect can seem insectoid or anatomical, or suggest mental activity rather than physical landscapes. Or abstract evocations of feeling. Harper’s titles are consistent with this. The show includes ‘Red Brain Recording’, ‘Faraway Nearby’ (from Rebecca Solnit’s book about her mother’s decline with Alzheimer’s) and ‘Empires of the ill’ (derived from the reader ‘Empire of the Senses’). Environmental references appear in ‘Tipping Point’ and ’Shifting Baseline’, as well as ‘Lyrics of Lichen’. There’s also ‘Apicomplexa’ – a phylum of parasites: Harper likes how the word’s Latin origins in apex (top) and complexus (infolds) echo techniques of painting. That said, those aren’t titles to read across literally into what is seen: Harper has a list of potential titles derived from his wide-ranging reading and online activity, and chooses from them to suit the mood of the painting rather than to describe it. And though Harper doesn’t resist pictorial hook-ups if they appear, he doesn’t start from them, and likes his forms to be ‘believable, but not attached to objects’.

So, if all that is in the realm of the possible, what are we actually looking at? Harper creates a self-sufficient world out of the processes of painting. That world emerges from rapid instinctive decision-making, not the precise translation of observations – Harper describes it as finding ’a sensibility of growth’. To get there, he explains, ‘a membrane of transparent paint is spread across the slippery surface of the support. Brushes and various implements are pushed into this oily film to create an evolving collection of marks. My hand moves quickly across the surface, driven by a mix of intuitive responses and muscle memory… Each work extends my understanding of procedural memory, visual thinking, pattern recognition, sensory processing, neuro-aesthetics and haptic perception.’

What determines whether we are drawn in to reading Harper’s ever-expanding language of painted marks? There’s texture and pattern, the pleasure of tracking the fluency demonstrated, the moods evoked, the backlit effect, the appeal of unexpected chromatic conjunctions. That all helps, but, to cite Duke Ellington, ‘it don’t mean a thing if it ain’t got that swing’. Harper used to play the drums, and he sees similarities between how he wielded the sticks and the movement of his brush – which needs to be fast enough to avoid contrivance; skilled enough to convince at speed; and just sufficiently varied to hold staleness at bay when employing recurring motifs. That’s what a drummer would call ‘swing’ – incorporating a slightly off-kilter groove into a rhythm. And it’s the swing in Harper’s paintings that keeps us in the moment as we speculate on meanings.