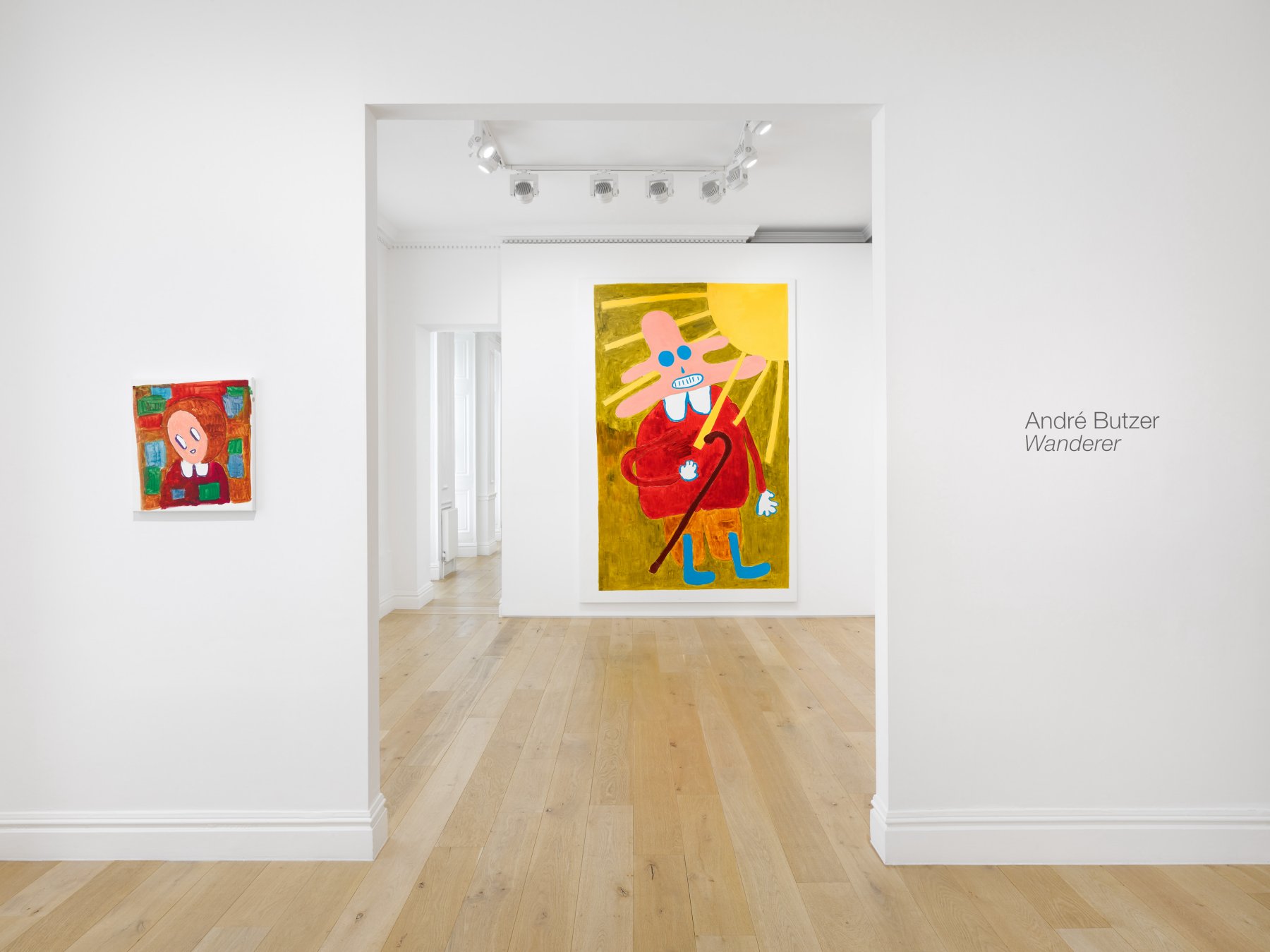 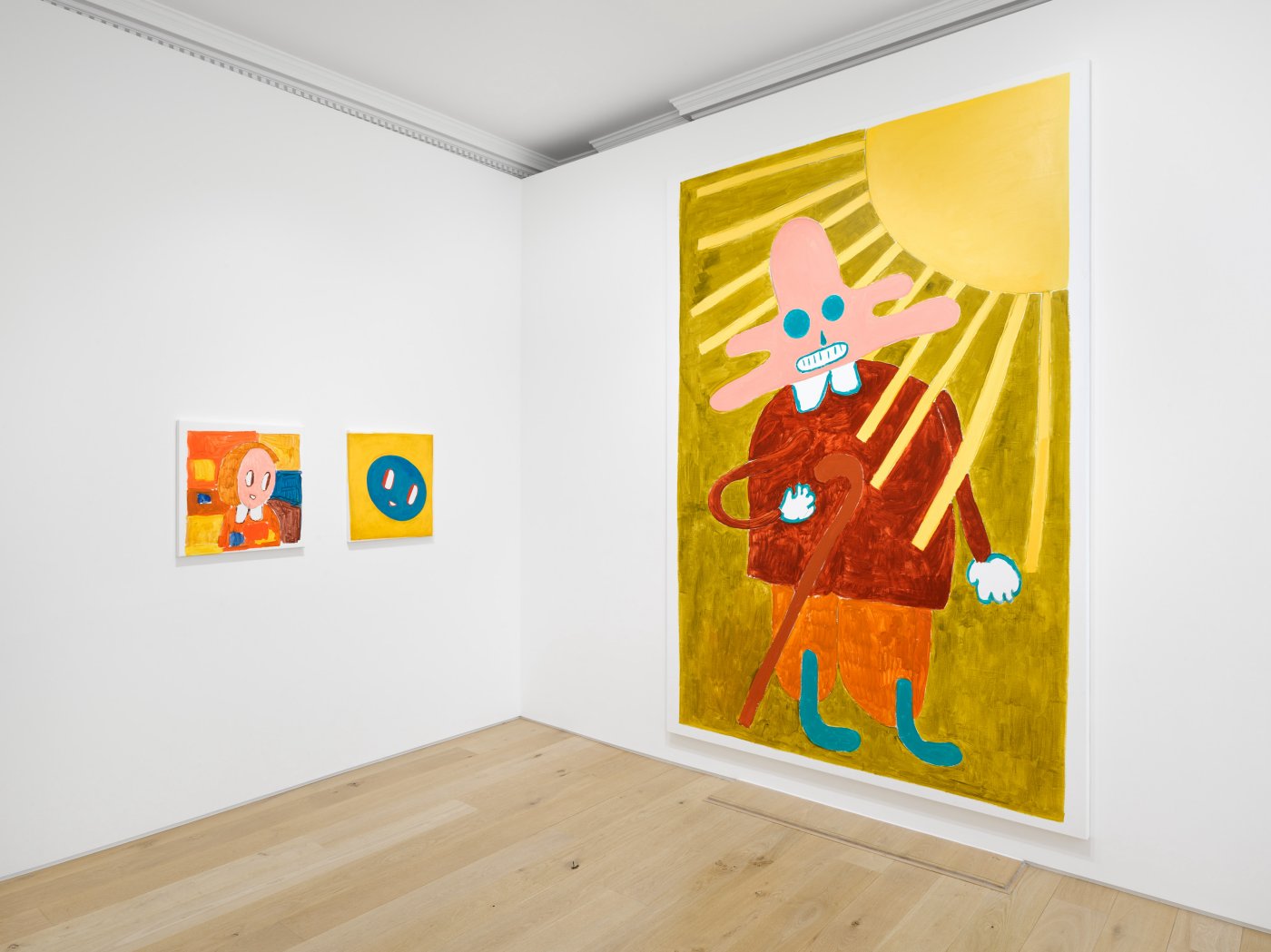 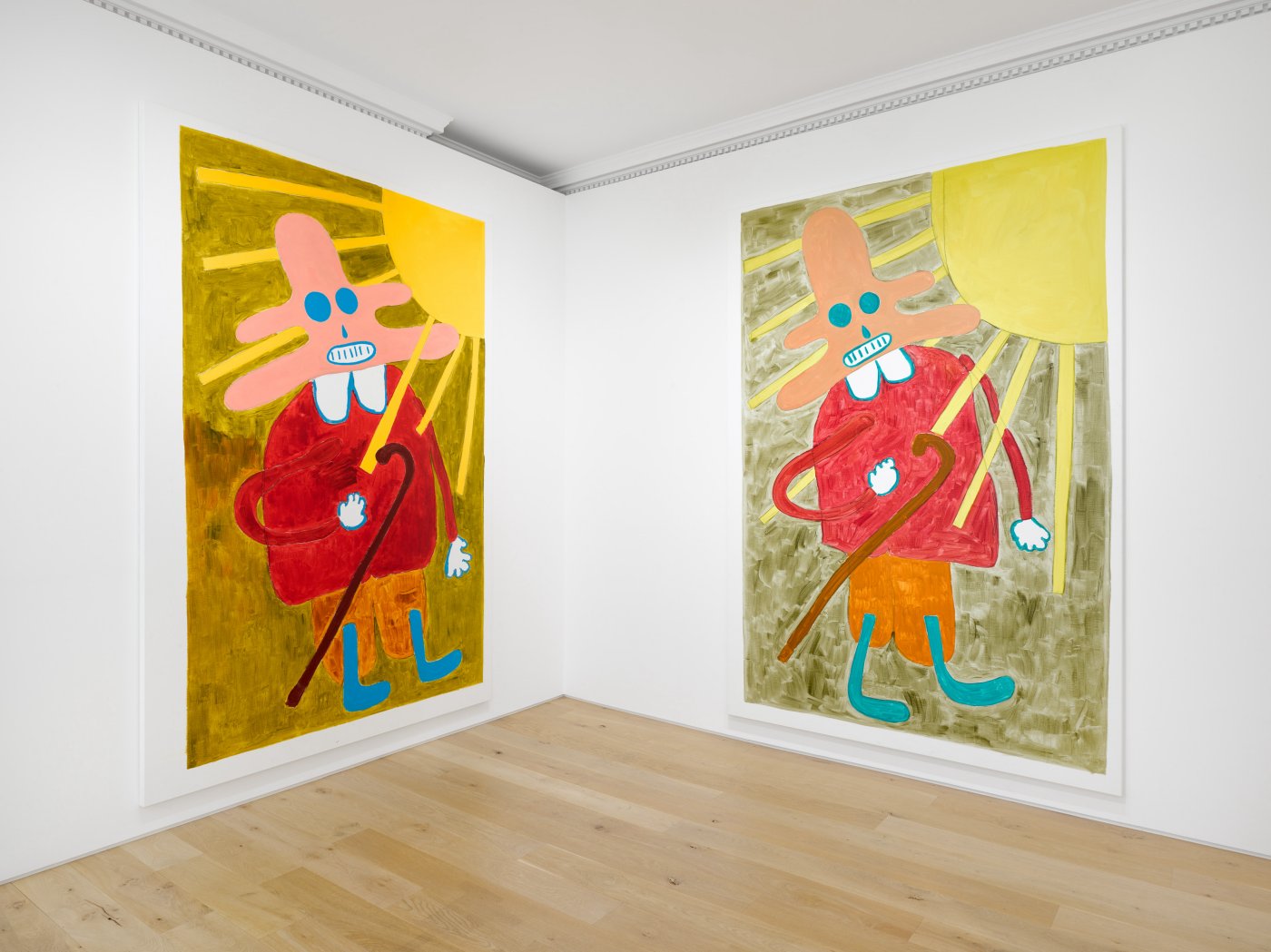 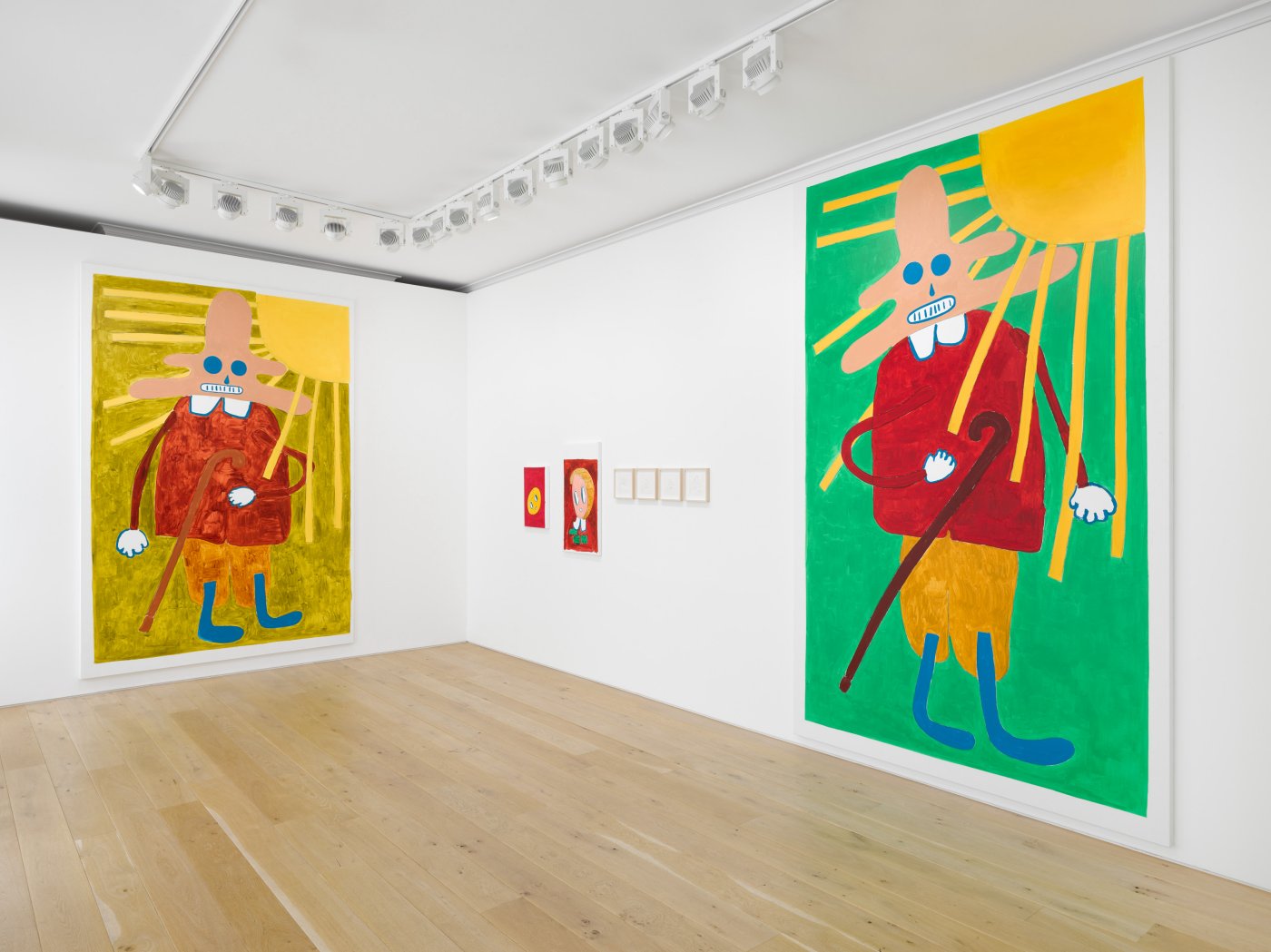 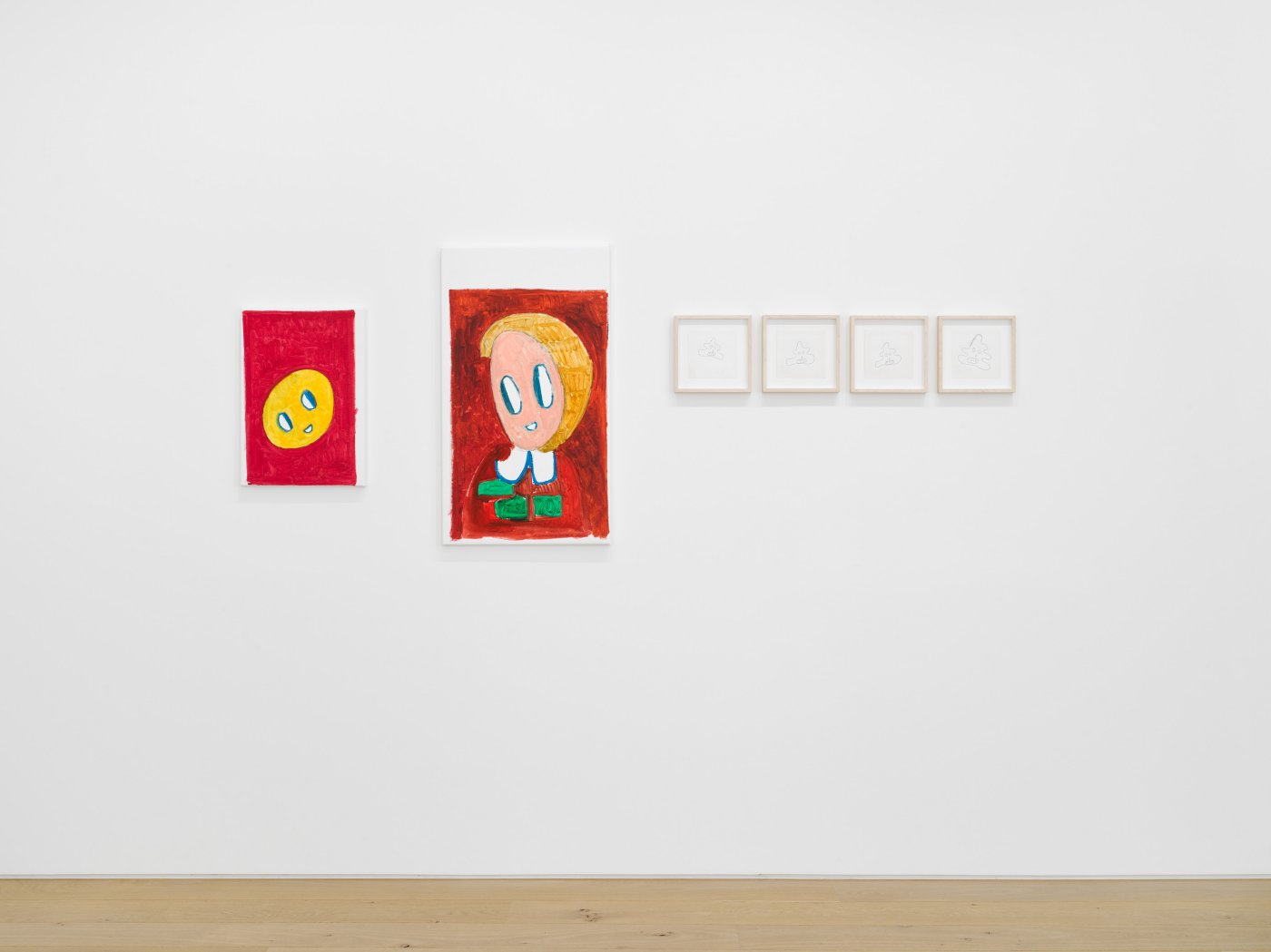 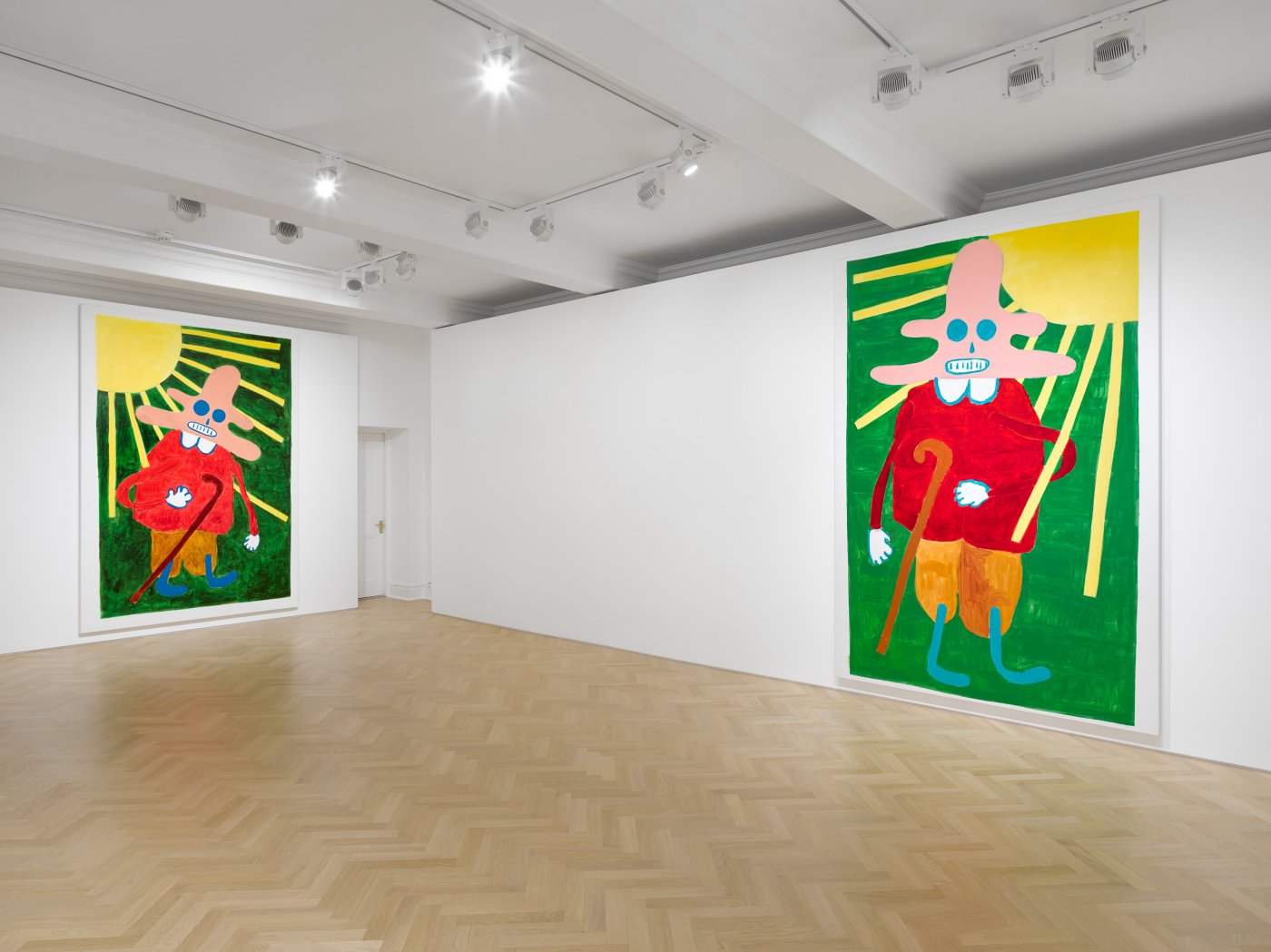 One of many wanderers on this planet earth, André Butzer (b. 1973, Stuttgart), seeking his own place, explores the essence of humanity, its extremes inherently interlinked, and one aspect impossible to realise without its opposite. Since the 1990s, he has grappled with his legacy, artistic and political, with the likes of Henry Ford, Walt Disney and Henri Matisse as his “patron saints.” Butzer journeys via the conduit of his paintings, themselves portals into the world of NASAHEIM, a utopian universe created by the artist as an ever-unattainable measure to aspire to.

We are pleased to present an exhibition focused on the figure of the Wanderer, one of Butzer’s first characters and in some ways his alter-ego, in others not at all. In 2001, the artist moved to California for a brief first time, a place often dreamt of by a young Butzer growing up in Stuttgart. Yet, he realised that the dream did not live up to his expectations and that home was neither here nor there. Recognising himself in German poet Friedrich Hölderlin’s ‘Hyperion’, “Butzer became a wanderer, spiritually lingering between an unreachable promised land and the given reality, calling for a timeless utopia. […] Like Hölderlin, he confronted, “in fearless solitude,” the incredible weight of the burden of history and intermingled what was with what would come, despair with dreamed-of redemption.” (1)

Today’s Wanderer has evolved out of Butzer’s earlier Man of Shame; his hollowed eyes borrowed from Munch’s Scream and his skull-like head and tentacles from SS iconography used in a 1997 album cover of the Melvins, then one of adolescent Butzer’s favourite rock bands. Through this figure, the artist attempts to seek redemption and, via a path of healing, begins to reconcile worldly contradictions. At one with his setting, in which figure, landscape and background are presented with the same and always different brushstroke, Butzer’s figure almost recalls Caspar David Friedrich’s Wanderer Above the Sea of Fog (1818)—he too a Romantic existentialist communing with the vastness of the world. Looking out onto the world, the Wanderer “becomes a symbolic embodiment of human existence constantly situated between earthly finiteness and the infinite generosity of the spirit.” (2)

While the Wanderer of the early 2000s was crippled, blinded by the sun, his guts spilling out, these recent ones appear to embody a different spirit, entering a new realm through their identification with the artist and his own path. The cleansing and healing power of the sun, ever present in the California Butzer had to leave behind, serves as a gravitational focus, drawing the figures into a new light of endless return to home, to forest and water.

The Wanderers fill the gallery, looming figures in traditional pilgrim outfits accessorised with gloves borrowed from Walt Disney and a floating cane. Their hands washed of evil deeds, are they finally ridding themselves of their crutch, reaching into the light? Or like Icarus, victims of hubris, are they falling into the abyss, their bloodied hands masked by gloves? In certain instances, the rays of the sun dig straight into their heart, a weight on their subject. In others, standing tall, they confidently look out onto the viewer and the world through their blue, pool-like eyes.

Returning to Germany from California, with an immaculate white smile, mirroring the collar and gloves, we wonder if it is pure light or artifice. With one hand, the Wanderer grasps his heart, attempting to ground himself, while the other dangles freely, carefree beside him—the balance found somewhere between the two, the beauty of this world existing in its contradictions. Amidst them, four drawings of disembodied heads float in the ether, like putti looking down onto earth. Perhaps they have already reached the celestial realm and will eventually guide the Wanderers on their planetary adventure.

In full effect:
This is not correct!
He as me lives in stoopid Berlin
Still near to tha god-Pots-damn’in
There the highty-mighty is
Coming out of the water
To protect against THEM ongoingly slaughter

The exhibition is accompanied by a catalogue.