Leila Heller presents Ana D’Castro’s solo show “Efflorescence: Variations on Color.” Ana’s works are an embodiment of how color speaks the language of the soul, expressing deep emotions and connections through beautiful waltzes of colorful fragments dancing through the canvas. 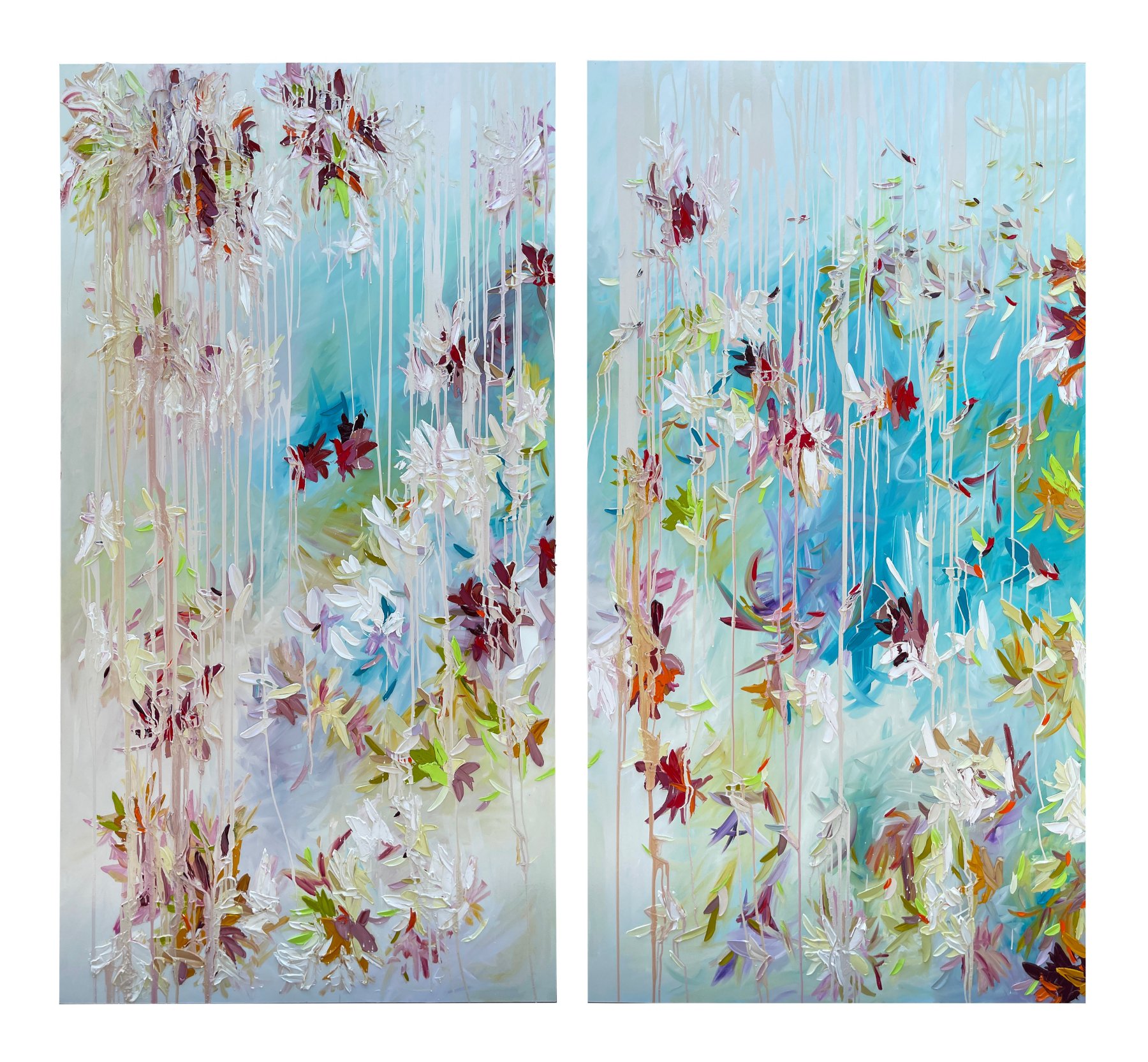 Each of her projects creates a kinetic immersion into a sensorial world of colors, wherein the visitors become a part of the artwork itself. Her work is analogous to a tridimensional fusion of art, architecture and the dimension of time, which is added by audiences’ trajectory in space around the artwork.

This show is comprised of a series of paintings made by an assemblage of materials added onto the canvas, creating a heavy texture of layers, which Ana progressively manipulates in the confined areas. Color is added with an intended proportion and gradient tonalities which complement each other, creating depth and volume in the piece.

“Efflorescence: Variations on Colors” is composed of a series of abstract paintings that aim to represent the pictorial evolution and a creative path associated with the artist’s conceptual narrative, through a systematic progression of moments that are translated into canvas starting from a calm and peaceful framework and evolving into an apogee of color outburst.

The exhibition is centered on the symbolism of desire and visual pleasure of an environment of colors that flow through dense layers of paint and texture … a visual journey in and throughout the artist’s pictorial universe.

Color is the main element of the exhibition, assuming a pivotal presence in the way it is manipulated, twisted and stretched to fulfill the artist’s goal. As if color becomes an elastic yet resilient material that takes over the canvas as a live organism. Its plasticity and fluidity transform color into different beings, each one with their own identity and DNA: either composed by a thick texture like oil, smooth and watery like acrylic or thick and sticky like enamel . . . powdery, metallic, matte or glossy. An endless world of live organisms that chose to react differently from each other, either by aggregation, symbiosis or decomposing and dividing the particles of each other into degenerated subdivisions.

The series of paintings aim at creating a bio-dynamic system consistent with the narrative of balance and inertia towards a climax and moment of sensorial visual peak. It is also important to point out that the paintings are part of a matrix representing the evolution of the artist ́s technique: the evolving density of the texture, the different layers of paint versus impasto technique and the subliminal inversion of each layer versus the previous artwork. The artworks become richer in density and evolve into a tridimensional piece that gives them a sculptural aspect, creating multiple views depending on the observer ́s position.

There is a constant search for the visual limit of each painting, meaning that some works go through a chaotic and impulsive destruction and consecutive build up over the “wrecked” remaining . . . as if there ́s a rebirth from a controlled chaos.

“Sometimes I feel that the paintings are too perfect,

as if there’s this inner voice that screams I’m not that perfect!!

. . . it’s just this constant itching that I can’t get away from.

Even if I distance myself from it, and start working on other pieces in a quest for letting it settle

In a rush of violent strokes,

there ́s this feeling of release and mainly freedom. You know nothing,

But actually you DO!

You suddenly know everything . . .

and this chaotic (controlled) chaos

it fills your whole world!”

Parallel to the color arrangement, the artist is interested in the architectural analysis of the flowers per se, an analytical dissection of each component.

The framework of the veins of a leaf is similar to a structural matrix and represented in the artworks as the “dripping” paint. The organic form and texture of the leaves and petals are interpreted as an element of architectural coating and finishing, reading as the different layers of impasto technique, their density, shape and thickness. An abstract metaphorical comparison between a world of flowers and their architectural interpretation: structural matrix plus coating materiality.

“Coming from an architectural background, my eye is subconsciously trained to see differently my surroundings. When looking at a flower as a singular element I intuitively search for her architectural features such as in the format of the petals and pods or the veins and framework of the leaves. Not the decorative aspect of a flower but mostly her timeless structural aspect. Taking this as a base I start analyzing the full spectrum of a flowery garden or a wild forest . . . and recreating these mental frames into my canvas by following the elementary principles of architecture: leveling the soil ( first layer of paint ), structural foundation grid (dripping paint), coating and finishing ( impasto ). “

From the inception moment Ana is interested in the relationship between how art is displayed and the specific architectural setting: “When planning an exhibition, the architectural site context plays a major role in my work: my aim is to achieve a complete synergy between elements, as if the paintings become the environment and the architecture itself. There is an intrinsic study that explores all the basic relations between the architecture and the presentation of the artworks.”

Ana ́s architectural drawings exemplify her space studies of proportions, scale and allocation of each element through layout plans, elevations and tridimensional models and maquettes of the project: “The obsessive planification of each individual element and its correlation with the juxtaposed ones, enables me to create an enlarged physical pictorial space once I ́m creating a narrative between the canvas, the observer and the space. Whereas by defining multipolar relations within the gallery space, each painting constantly interacts with the impression created by the whole, encouraging the viewer to reflect further on the relationship between all elements. Similar to reading a story tale, one can return to its favorite chapter after completing the entire journey. “

Ana ́s process consists in painting several pieces at the same time, and by doing it so there ́s an element of infectious dialogue between all the artworks; as if during the process of creation they contagiously impact each other: “On a subconscious level I ́m constantly being fed by the evidence itself, therefore there ́s a constant obsession of mitigating the action of matter and form and elevating it to a pure and perfect residualized outreach. Throughout the creative process there ́s a continuous practice of realization and elimination of ideas, fundamentals and paradigms, reinventing the theory per se and persistently searching for knowledge and perfection. The progression and mutation of the processual interplay embrace a journey of destructive creation.”

The serial in art consists not in identical replication, but in the interplay between repetition and difference, which allows art to free itself from static representation and embrace continuous process. (Gilles Deleuze)

Ana’s works evoke a constant study of color and the juxtaposition of different pigments: “Through my practice my aim is to manipulate color and the subtle variations of the same gradient, in order to create volume, depth and perspective within the canvas. While composing the movement of the piece I carefully study how color will add or subtract light and shadow into the ensemble. Color plays a major role in my artworks, and I am constantly looking for the exact tone, the role it plays by allocating it in a specific place and how instantly this act either dilutes or enhances the volumetric composition.”

Ana D’Castro is a Portuguese visual artist and architect born in 1984. From an early age, Ana lived and worked in different parts of the world including Brazil, Singapore, France, Switzerland and the U.A.E. With a master’s degree in architecture, her works are strongly influenced by a mathematical base set in the foundation of proportion, scale, volume and color. From paintings to art installations, Ana’s work is often abstract and relies on the principle of deconstructing an element to its bare essence. Nurtured and educated to appreciate nature from an early age, it is her biggest inspiration. She intensely absorbs everyday moments like the sunrises, sunsets, visualizes the manipulation of colors, textures and translates it into her artworks.

Ana believes that conceptual inception of her work lies in the core principle of sensorial experiences and therefore everything she conceptualizes aims to create a rich and engaging experience for the end user. Throughout Ana’s works there is an obsessive search for the use of color and its direct association with environmental psychology. Her work also explores how movement and rhythm are introduced in a space through geometry, and site-specific design installations that create multiple uses for an ordinary room.

She defines her practice as “ARTchitecture”, representing the symbiosis between art and architecture, blurring the boundaries between the two and exploring higher levels of complexity by doing so. Ana feels that her intensive obsession with dimensions, proportions, balance and scale draws her into a compulsive alignment; the confinement and rigidity of thought, which ultimately allows her to be more flexible and free. Her process involves an abstract concept of equilibrium and balance between individual pieces of a composition; once the balance and order between proportions, alignment and location of each artwork is achieved, she begins her journey of colors!