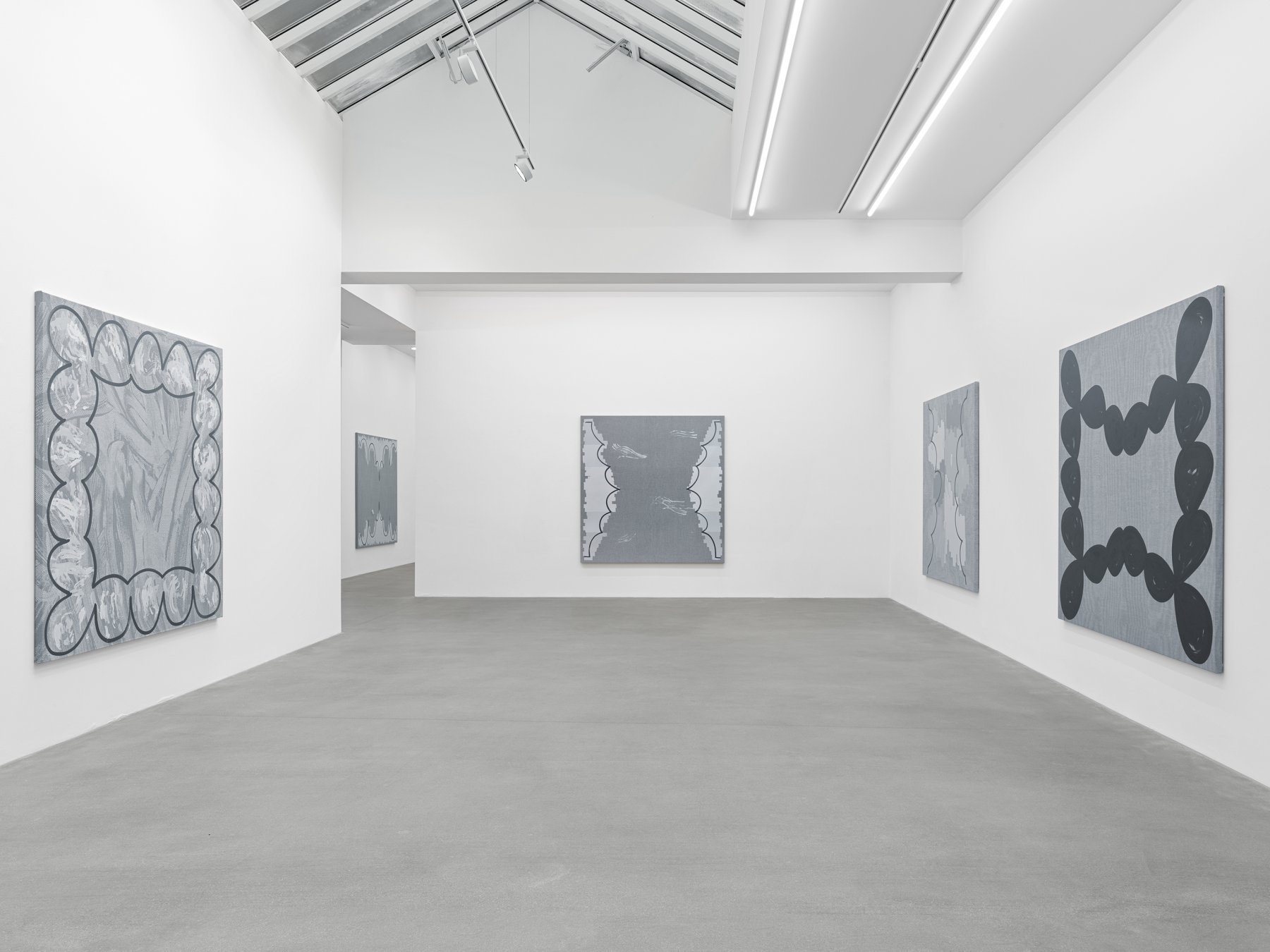 The surfaces of Feldman’s recent works are enlarged and exaggerated facsimiles of raw canvas over pristine gray fields. In this presentation, Feldman introduces a moiré effect within her printed fields. The moiré that appears as another new direction furthers Feldman’s relationship with tonalities as well as her conversation with the viewer. Imbuing the paintings with a reverberating—almost mercurial—finish, this coloring on the surfaces signals an exploration of both light rays and light’s absence. “On first inspection, the viewer might not initially notice the printed ground and assume my paintings have rough surfaces,” Feldman says. “The illusion becomes clear when the work is examined up close. I am excited by this moment, the viewer’s suspension of disbelief, when they acknowledge their own capability to accept fiction as fact.” The artist attributes this interaction to “a moment of instability when the notion of truth feels subjective —feels gray.”

In defiance of the gradual disappearance of the artist’s hand in art-making, Feldman delves deeper into the tactility of painting, particularly of the canvas medium. Multiple passes of silkscreen ink enfold various textures of the raw canvas and transfer their woven physicality onto grey fields. While the process remains a partially enigmatic element for the eye, the bodily presence of the canvas is never compromised, even elevated as an integral part of the finished work. The introduction of finger paint contributes to such a reminder of the materiality in painting. Feldman’s fingerprint—a form of identity, character, heat, and authorship—salutes the trajectory of art-making as far back as the cave paintings marked with fingertips.

The show’s title encapsulates Feldman’s subversion of in-betweenness and permanence. Goodnight Light is both a farewell and a welcome, a release and contraction and, most gloriously, an assumption of the nocturnal dark and knowledge for the light to return. A daily period of production and an impression of tenebrosity, nighttime for Feldman holds kinship to her key themes, forms’ slipperiness and continuum of flux. Similar to the supposedly binary nature of night and light, the duality between pressure and release is contained in painterly kinetics. Edging towards discharge, the forms seem compressed to a tension—or on the opposite end, their floating airiness nears envelopment. Like a head swimming up towards the air or a body running to the light, the anticipation for a “becoming” in Feldman’s universe remains suspended.

In Aura Storm, two cloud-like forms vertically bookend a light gray mass with borders painted into a pixelated geometry. Their perfect upright symmetry is challenged with linear smears of finger paint. Imprints of a second and a human urge, the lines resist the fleeting moment with the alchemic reality of the acrylic paint. The satirical touch of the maker is evident in Blob Throb with a generous dollop of white paint—which Feldman refers to as meringue—adorning the left bottom corner of another seemingly symmetrical orchestration of bulbous erratic lines and combat between white and grey washes. The cloudy blob contains dualities: both an interrupter and ornament, softness and rigidity, as well as temporal and of the instant.

The body—whether the artist’s own as an agent of creation or an allegorical one encapsulated in the paintings’ forms—is a critical cue in Feldman’s direction. From a signature motif, which can be called intestinal, to other organic—almost breathing—patterns, Feldman’s visual language derives from the body’s autonomous malleability and interdependency. The repetition of certain shapes in different paintings builds a hereditary constellation within her oeuvre, supporting a sense of familiarity and continuance. On the interaction of the physical and psychological, they encapsulate the topology of the artist’s correlation of both autonomies. “They are an imprint, an after image like when you accidentally cut yourself and it throbs long after,” she says about her shapes. “Artists take in energy all the time, and this throbbing comes out in the work—it’s a manifestation of the experience, of what the world brings.”

From the image saturation online and off to technology’s yielding of its own aesthetic codings—glitches, pixels, or blurs, the promise in abstraction still provokes Feldman’s decade-long relationship with the canvas. The transformation along the way has been tied to the necessity and possibility of foundational forms, such as bulbs, curves, lines, or zigzags, all while the speed of light is overshadowed by the pace with which information is disseminated, and attention spans are tightened. In such a landscape of visual bountifulness—or mayhem, if you will—Feldman’s insistently gray and white abstractions attempt to complicate the numerical hegemony of time, rendering its passage as a malleable order rather than a rigid progression.