Amoako Boafo: ME CAN MAKE WE

Amoako Boafo: ME CAN MAKE WE


Roberts Projects presents “ME CAN MAKE WE,” a solo exhibition by Amoako Boafo featuring new large-scale paintings that explore the tension of internal and external worlds, and of the complexities of shadow and light. Boafo’s second solo show with the gallery expands on his oeuvre representing and celebrating Blackness, while introducing significant new themes. 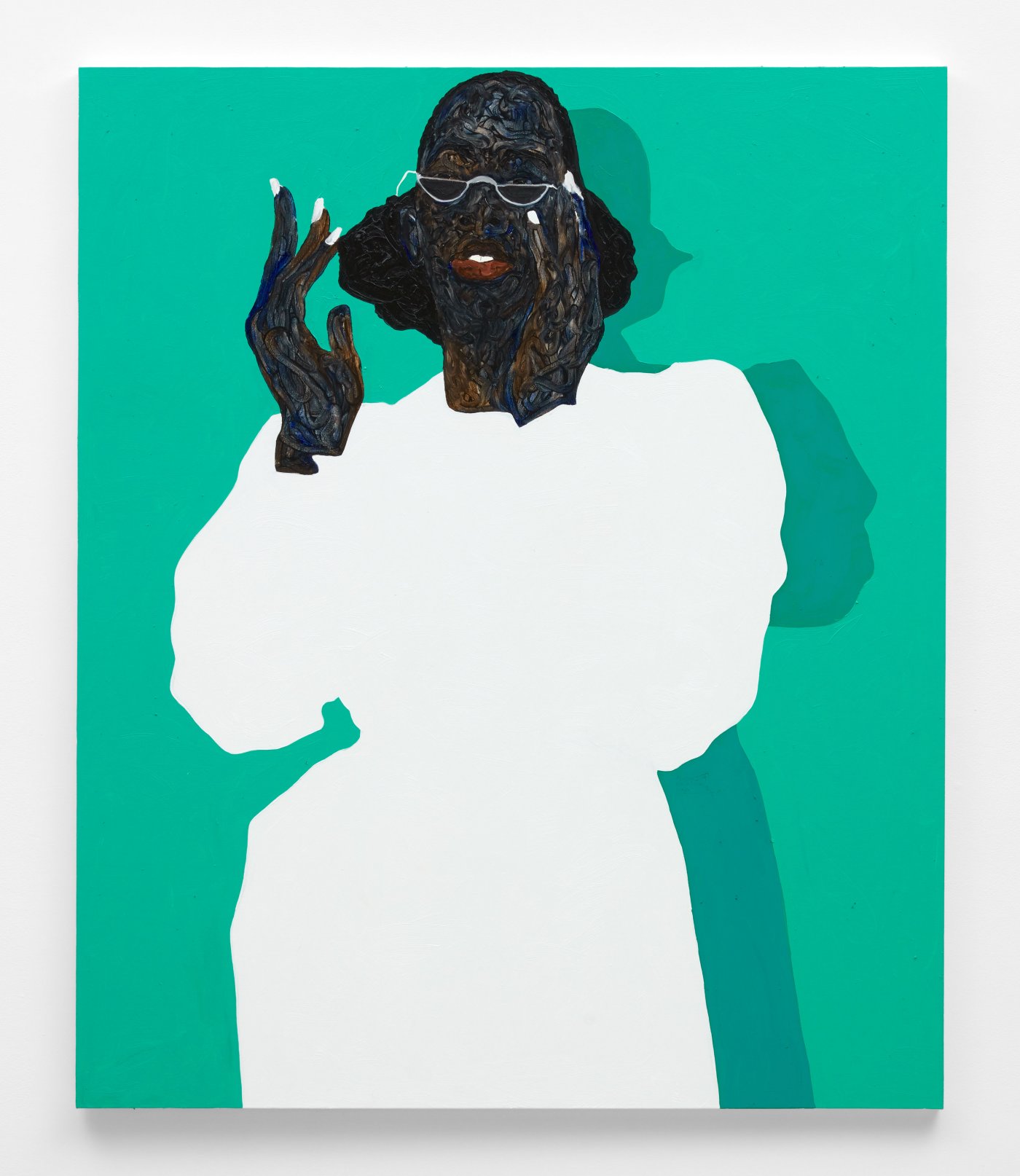 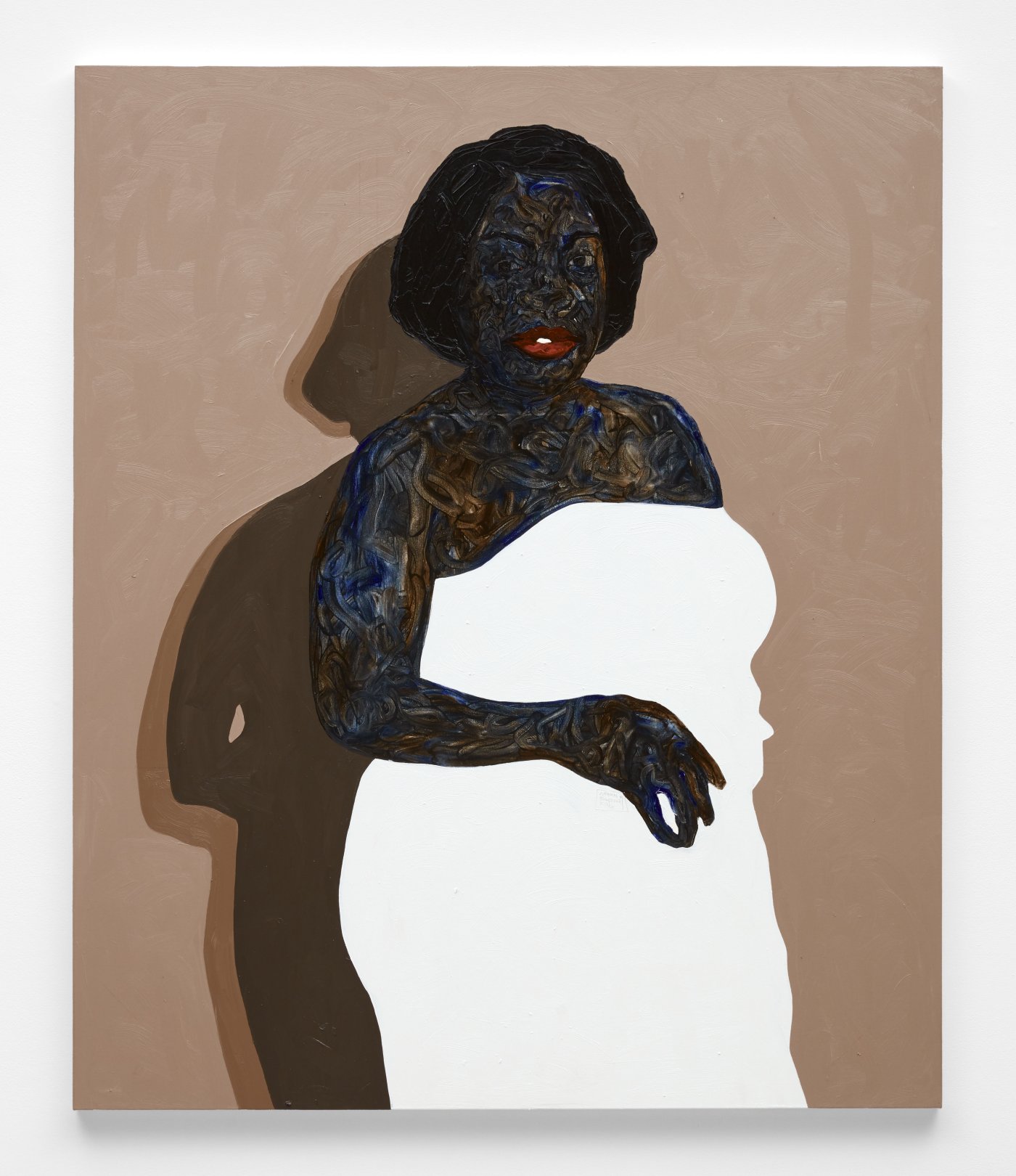 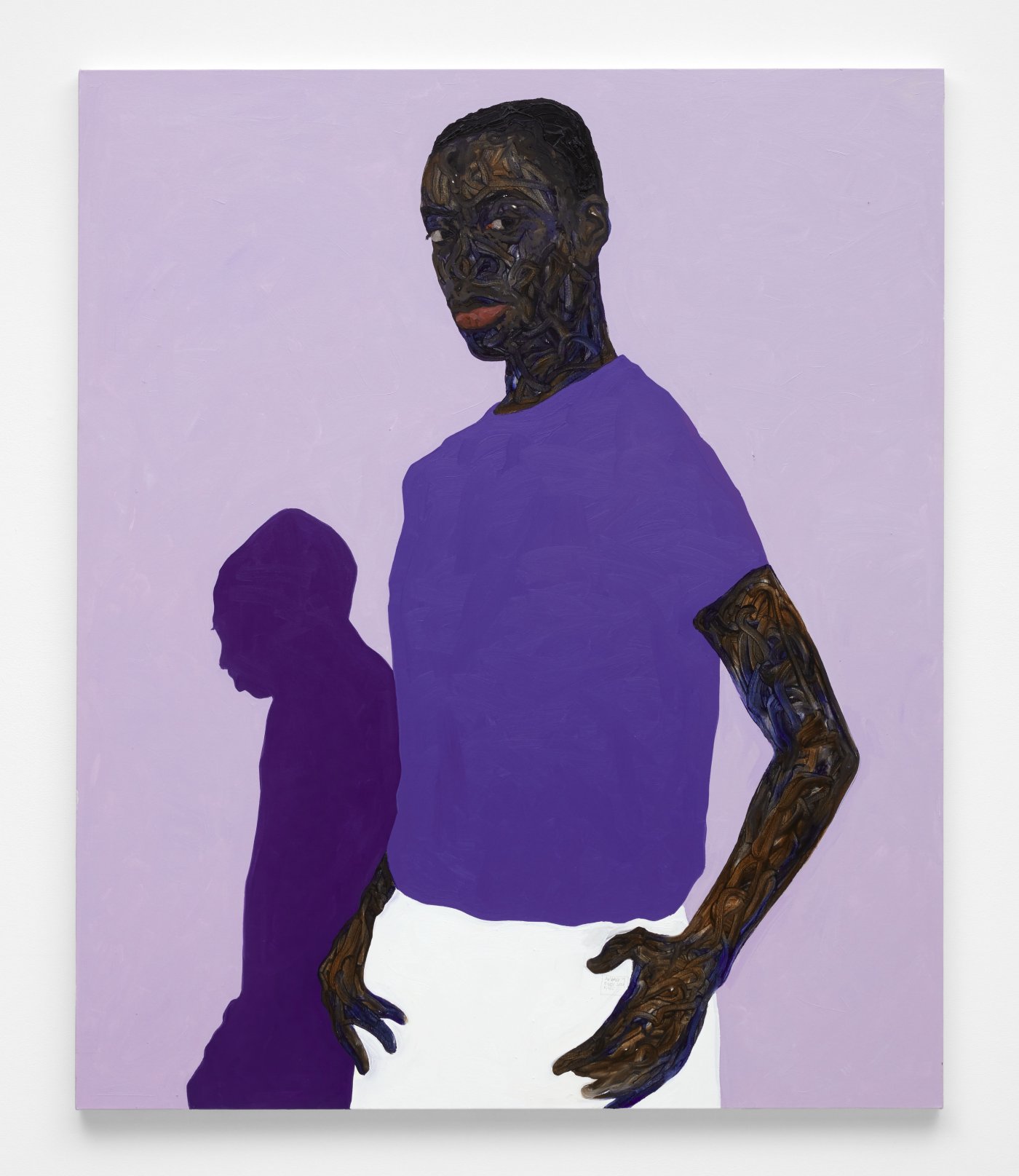 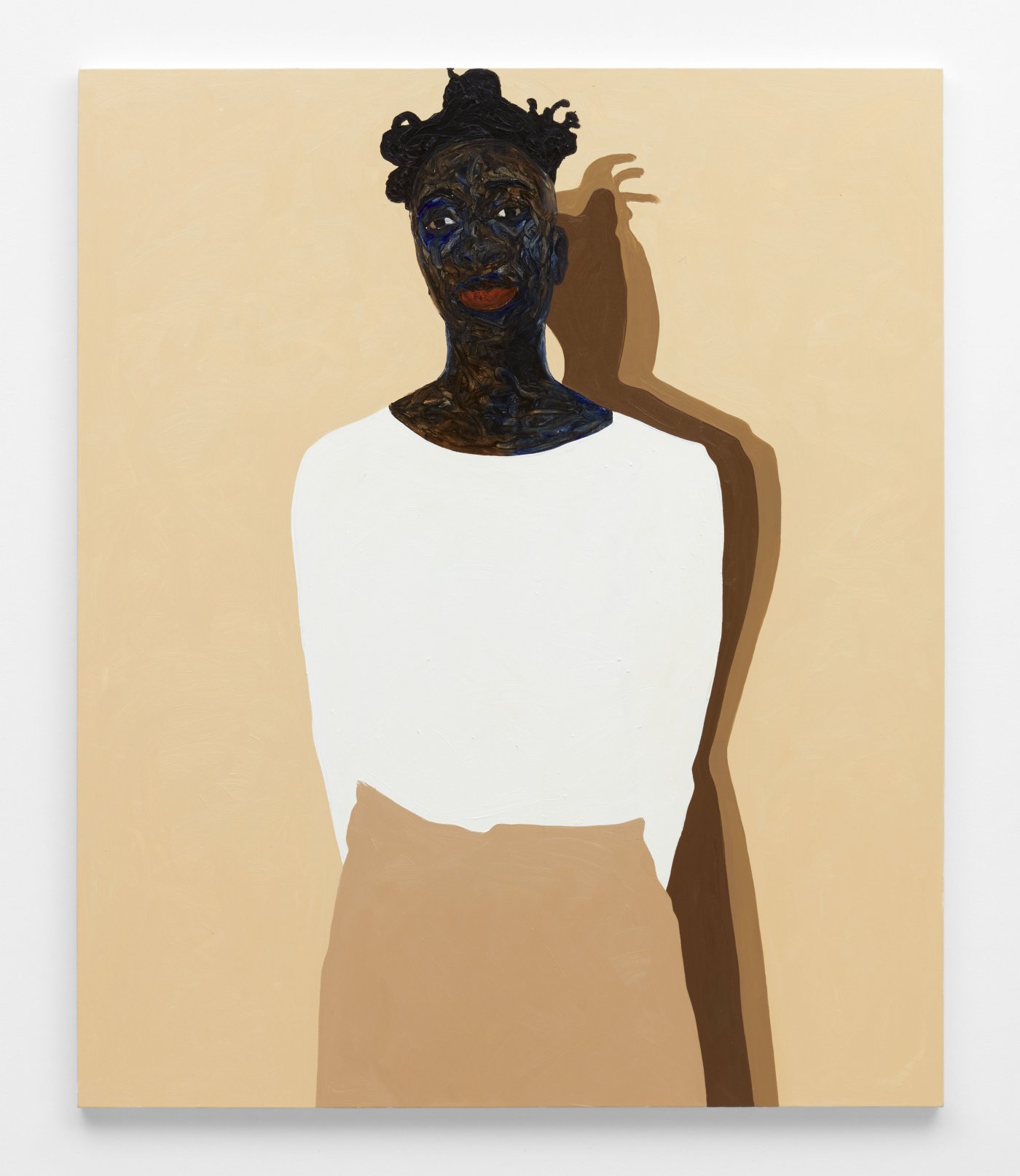 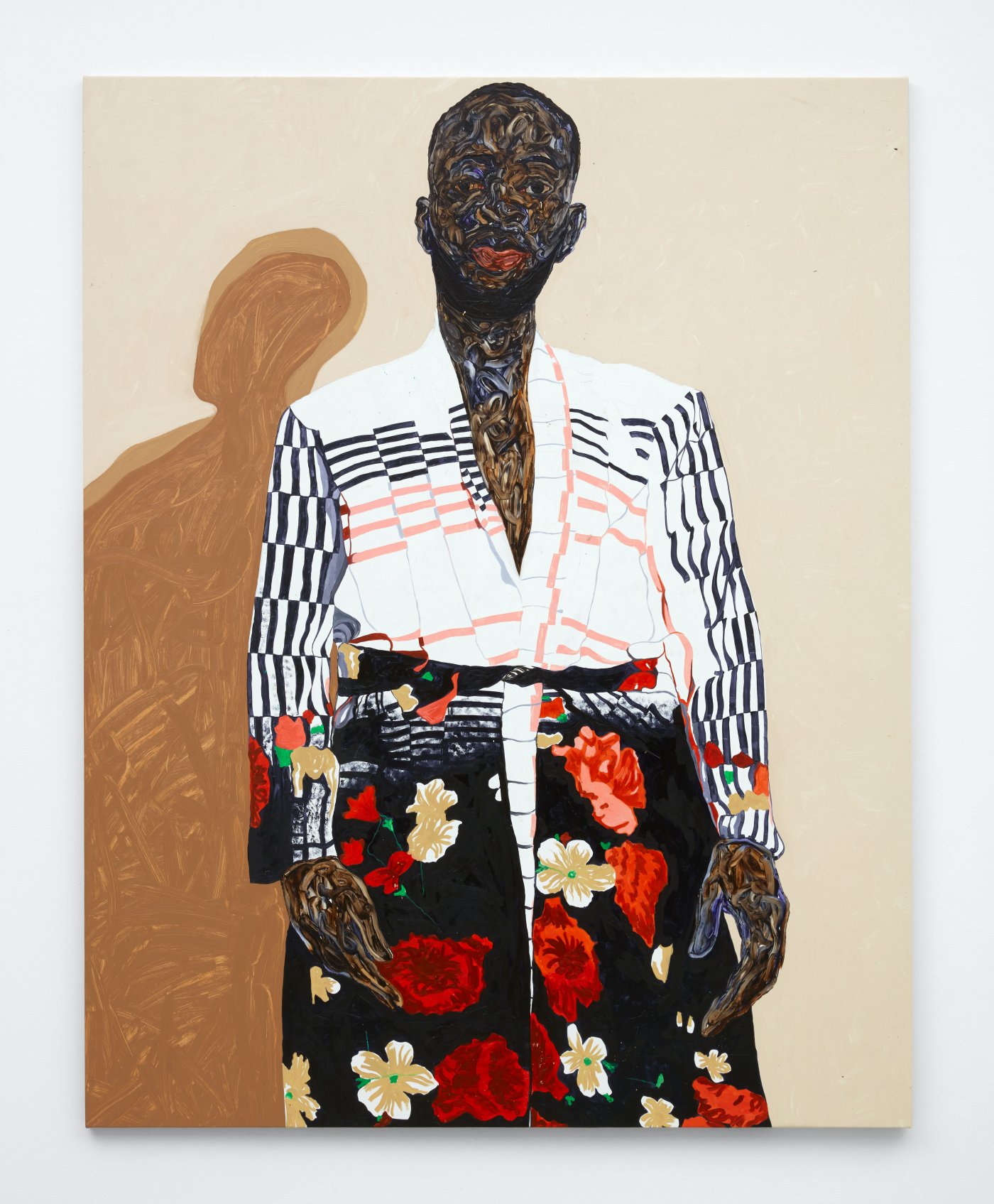 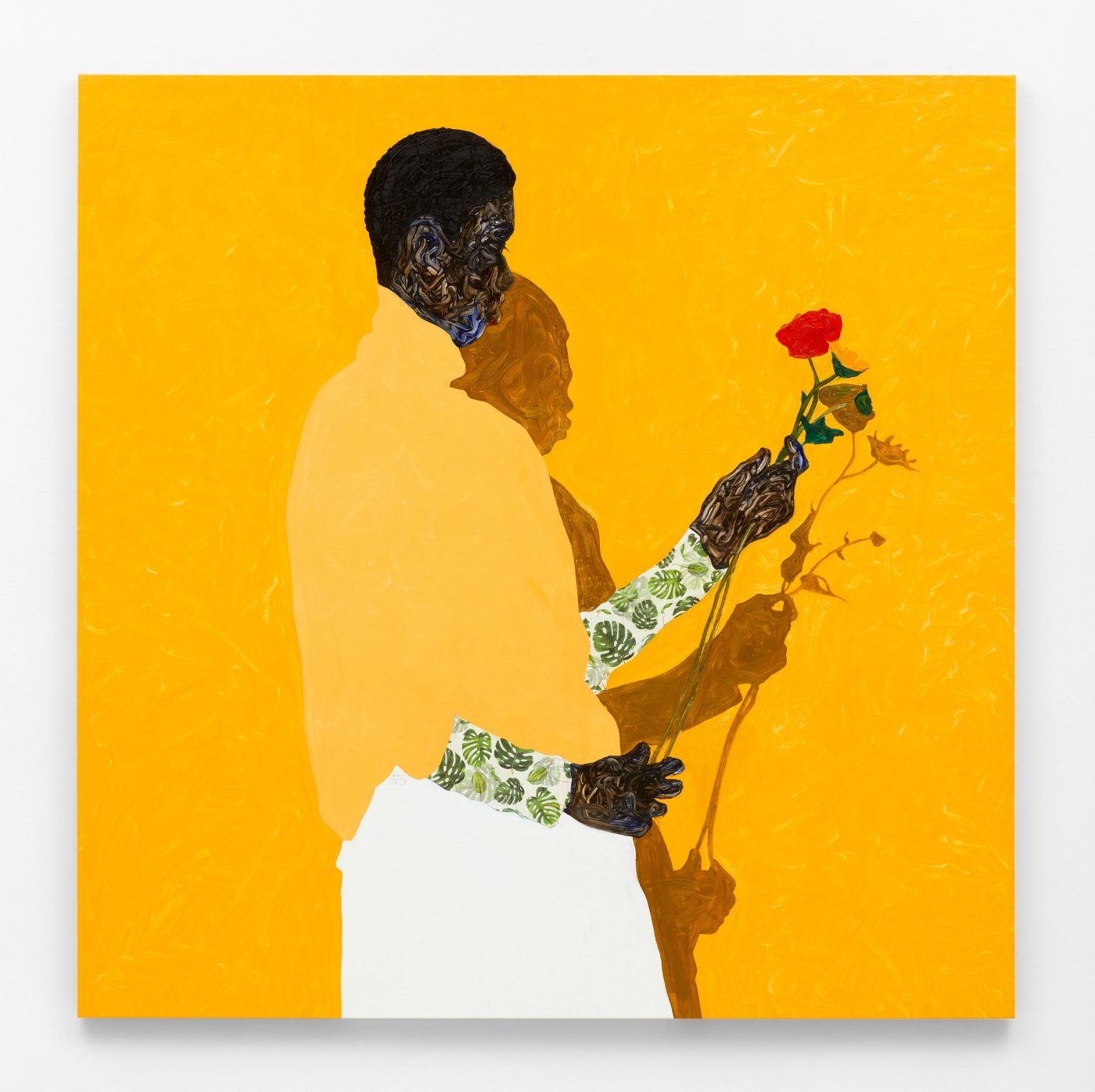 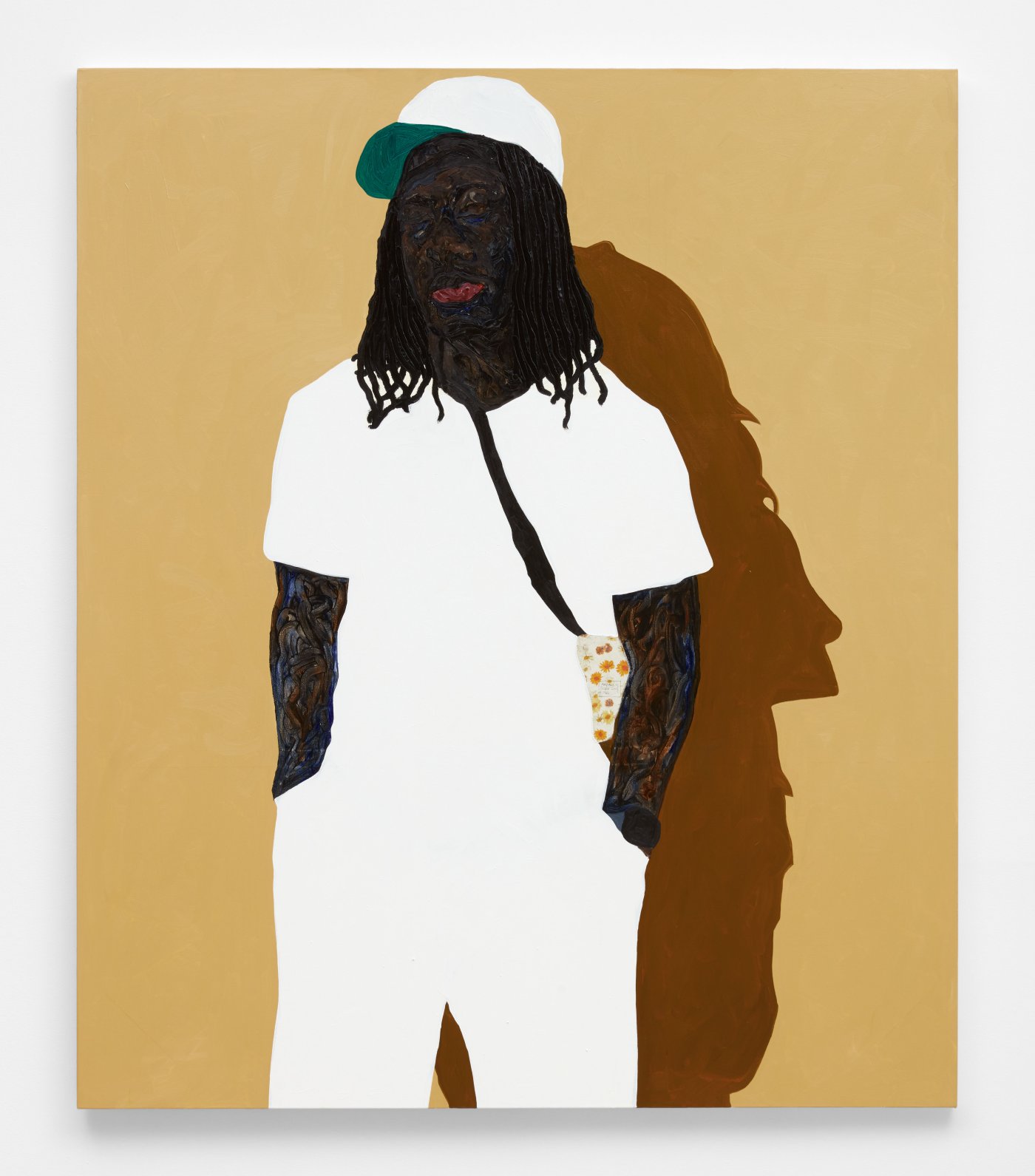 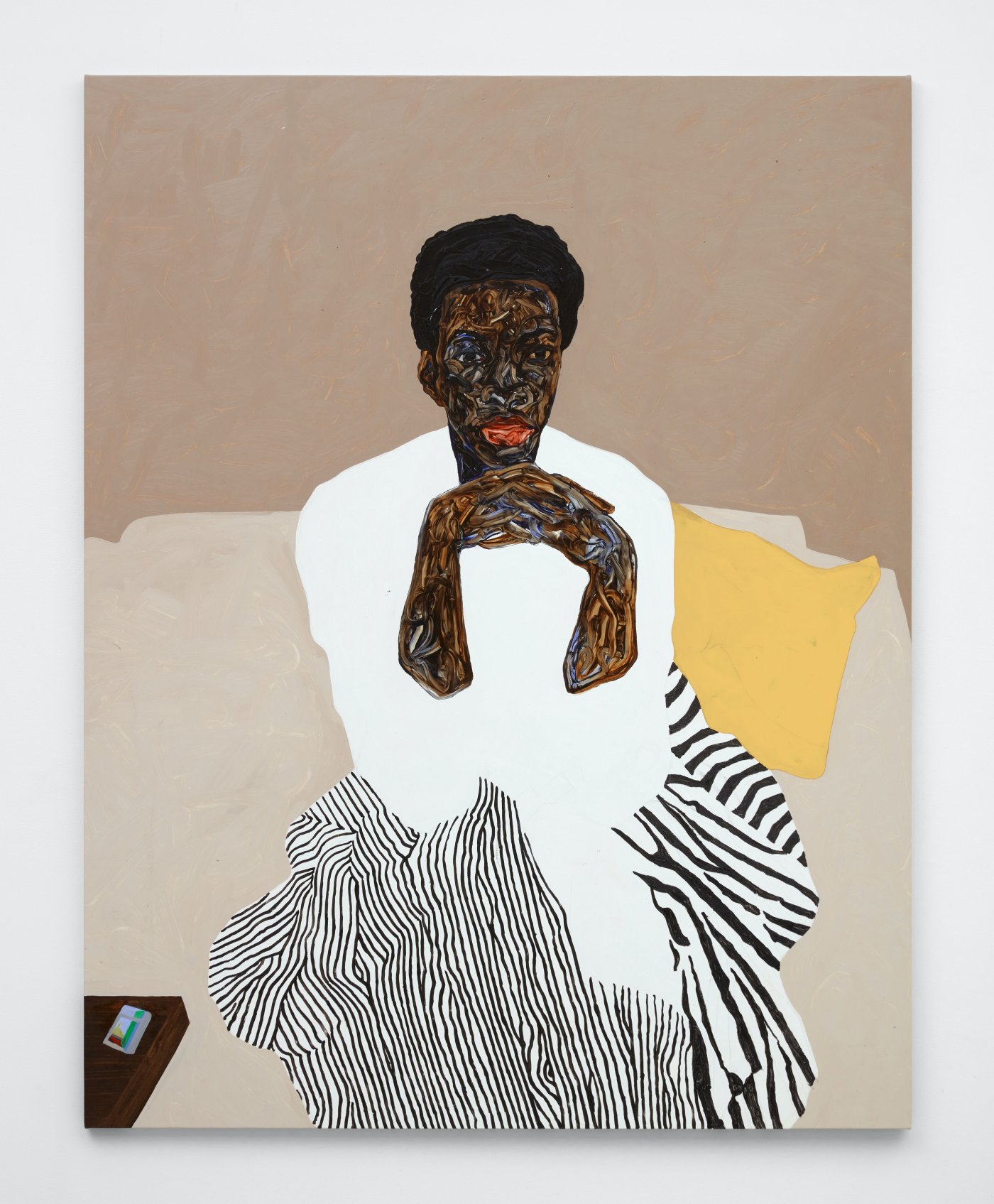 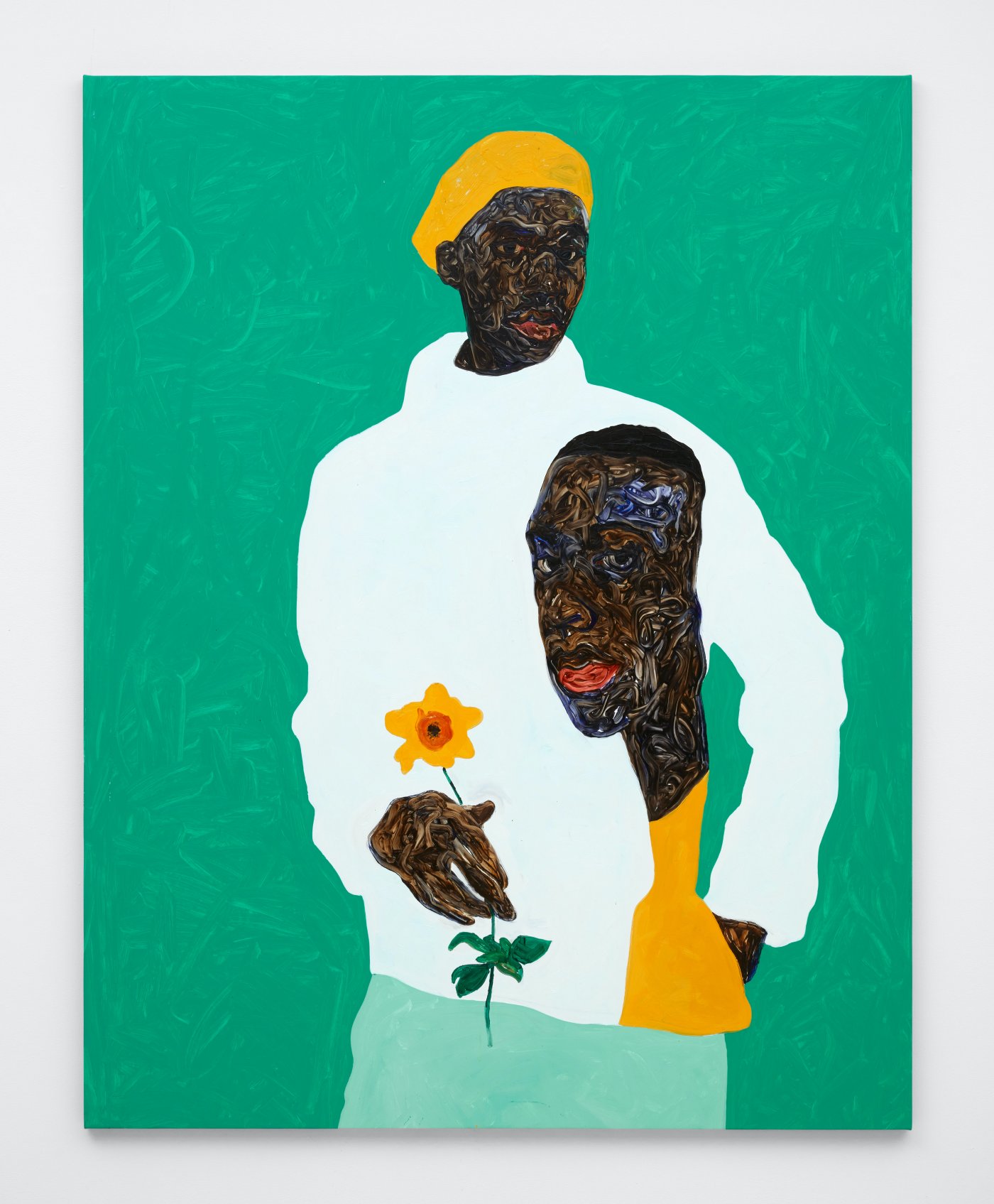 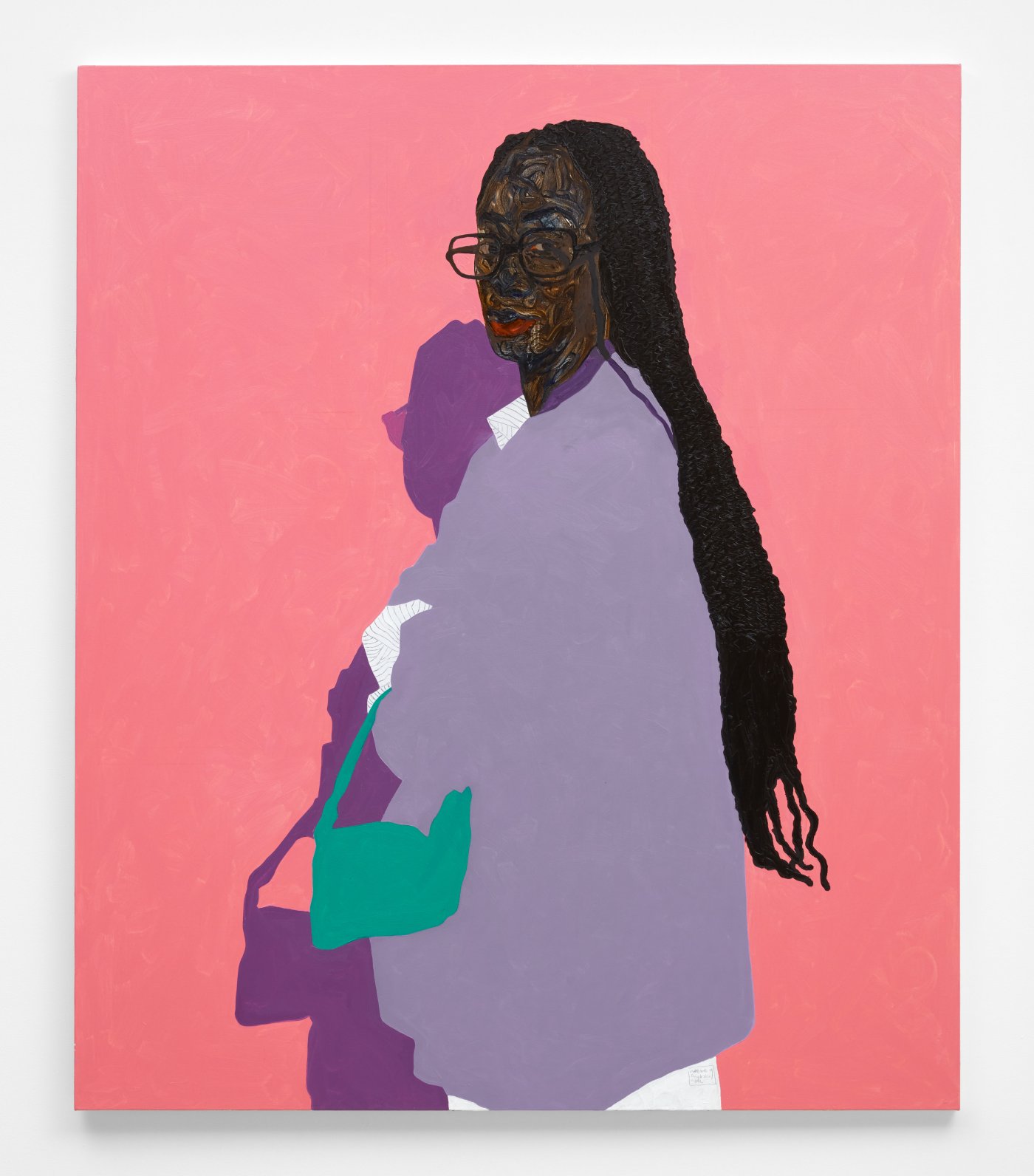 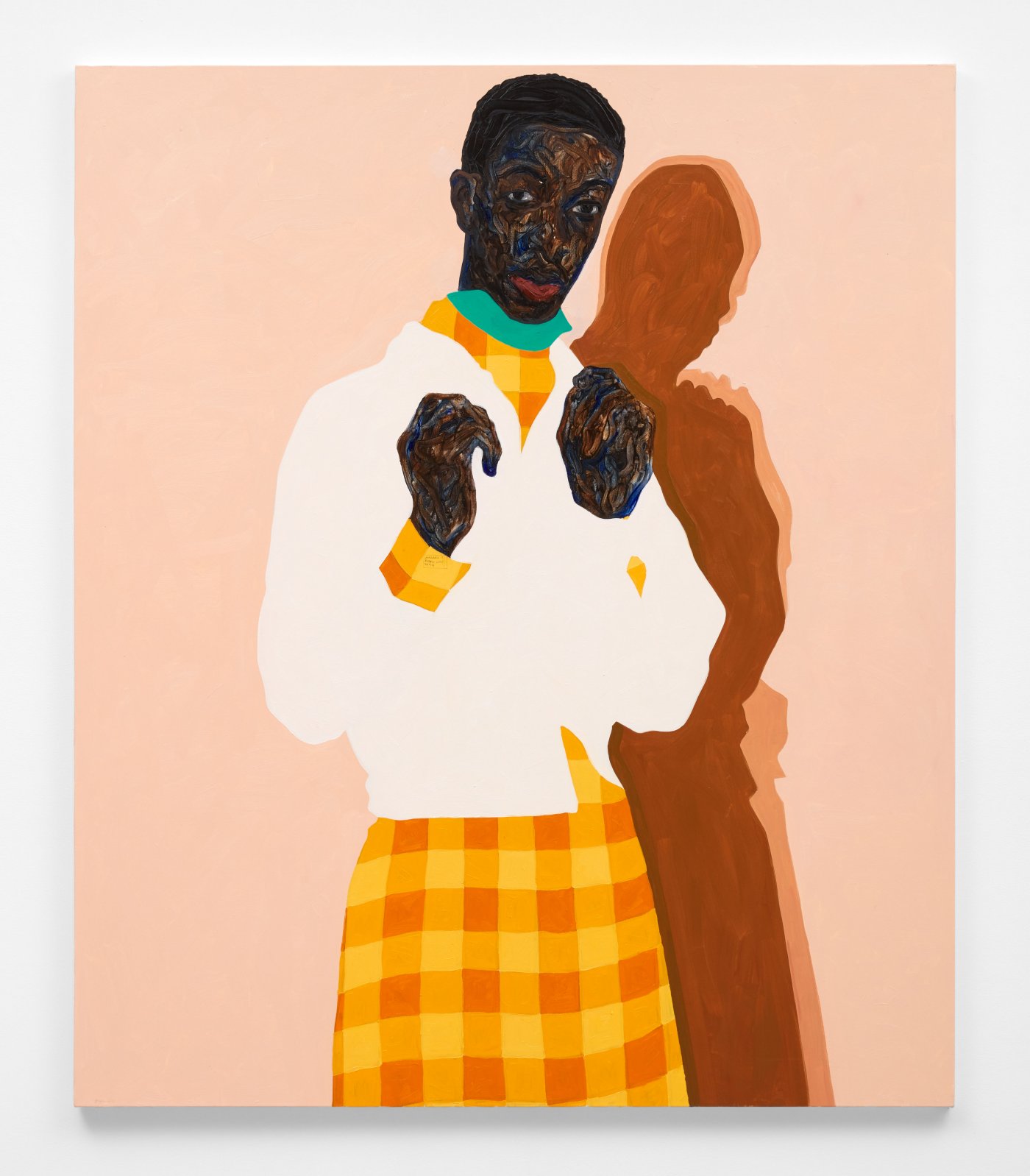 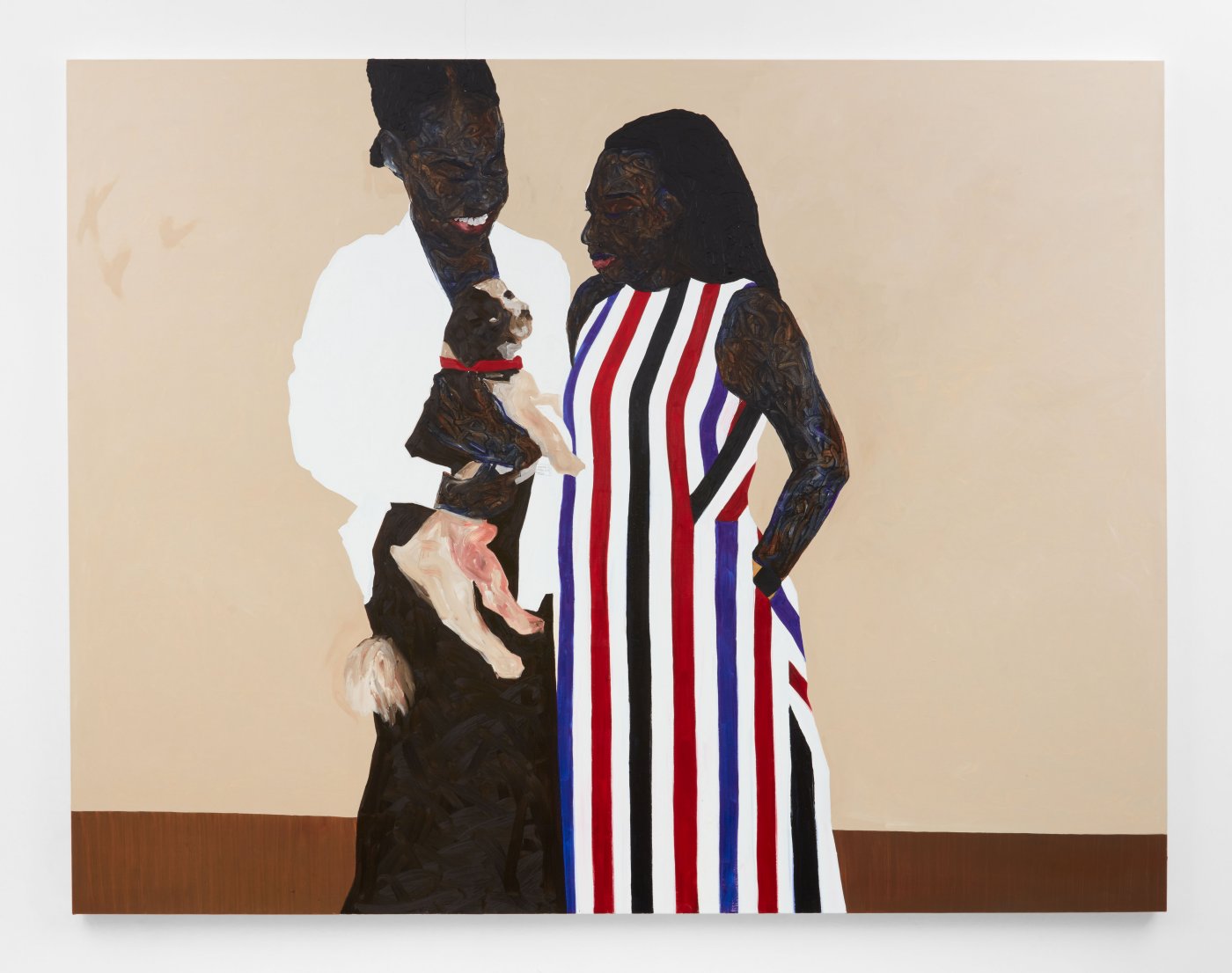 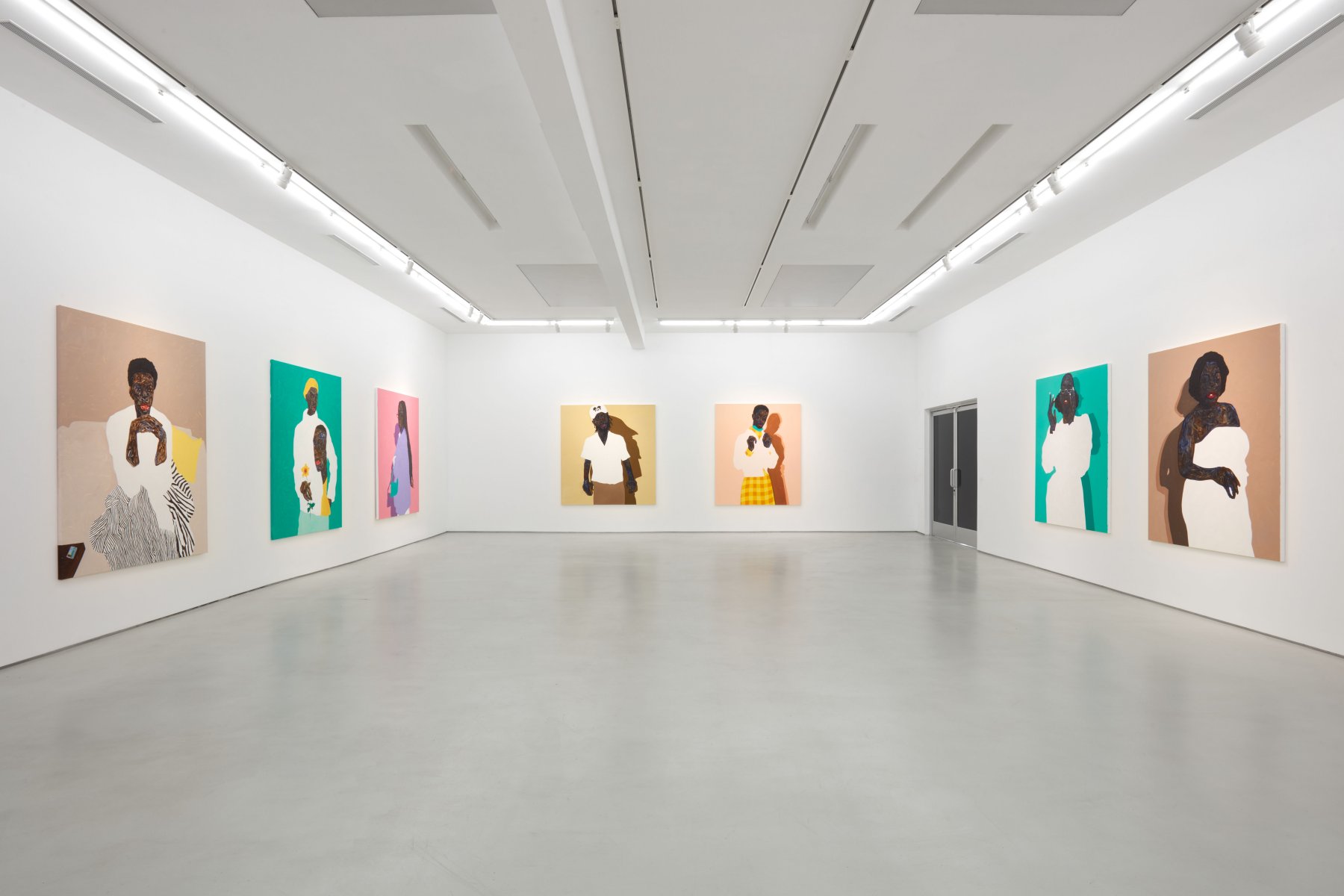 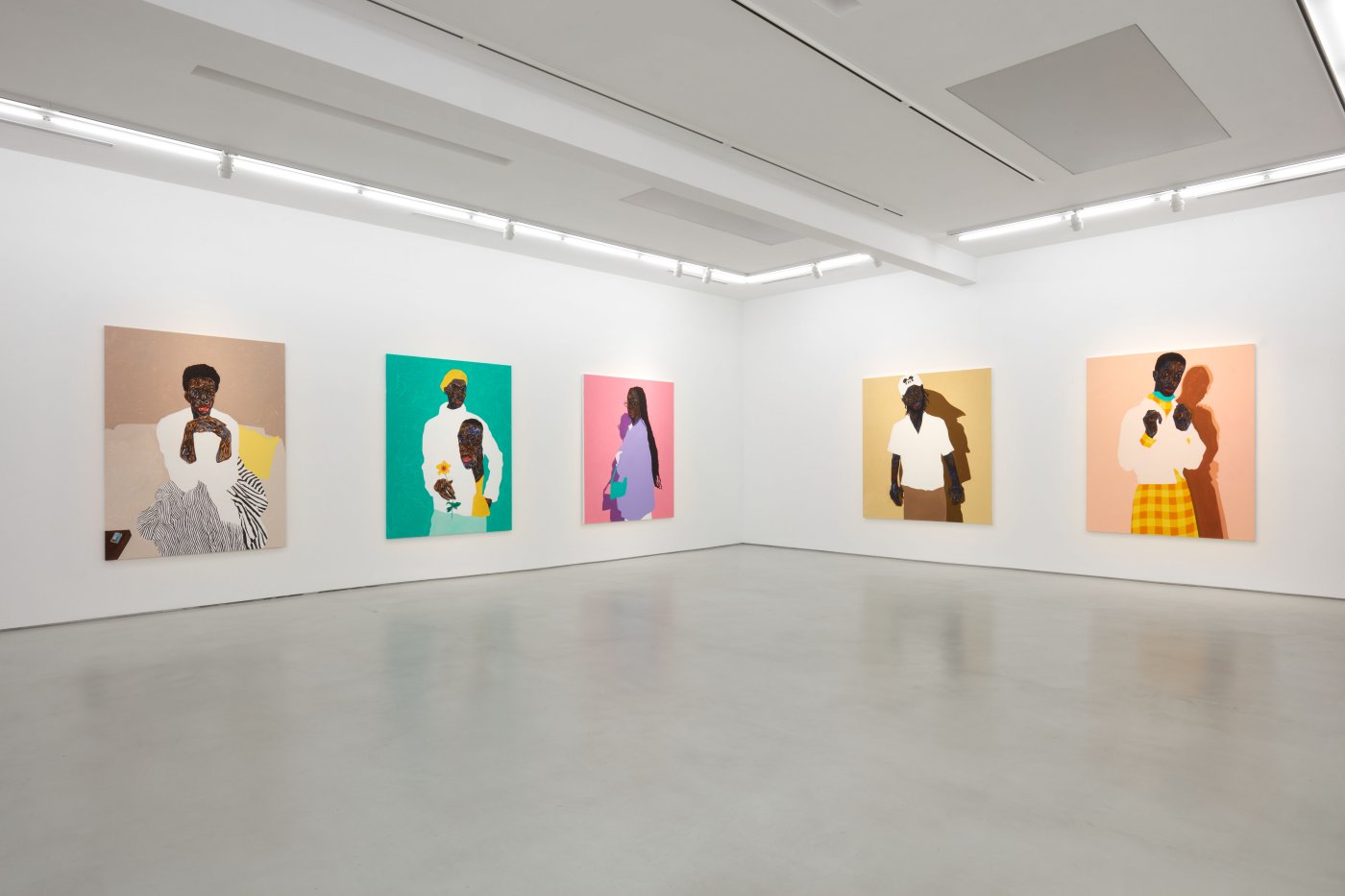 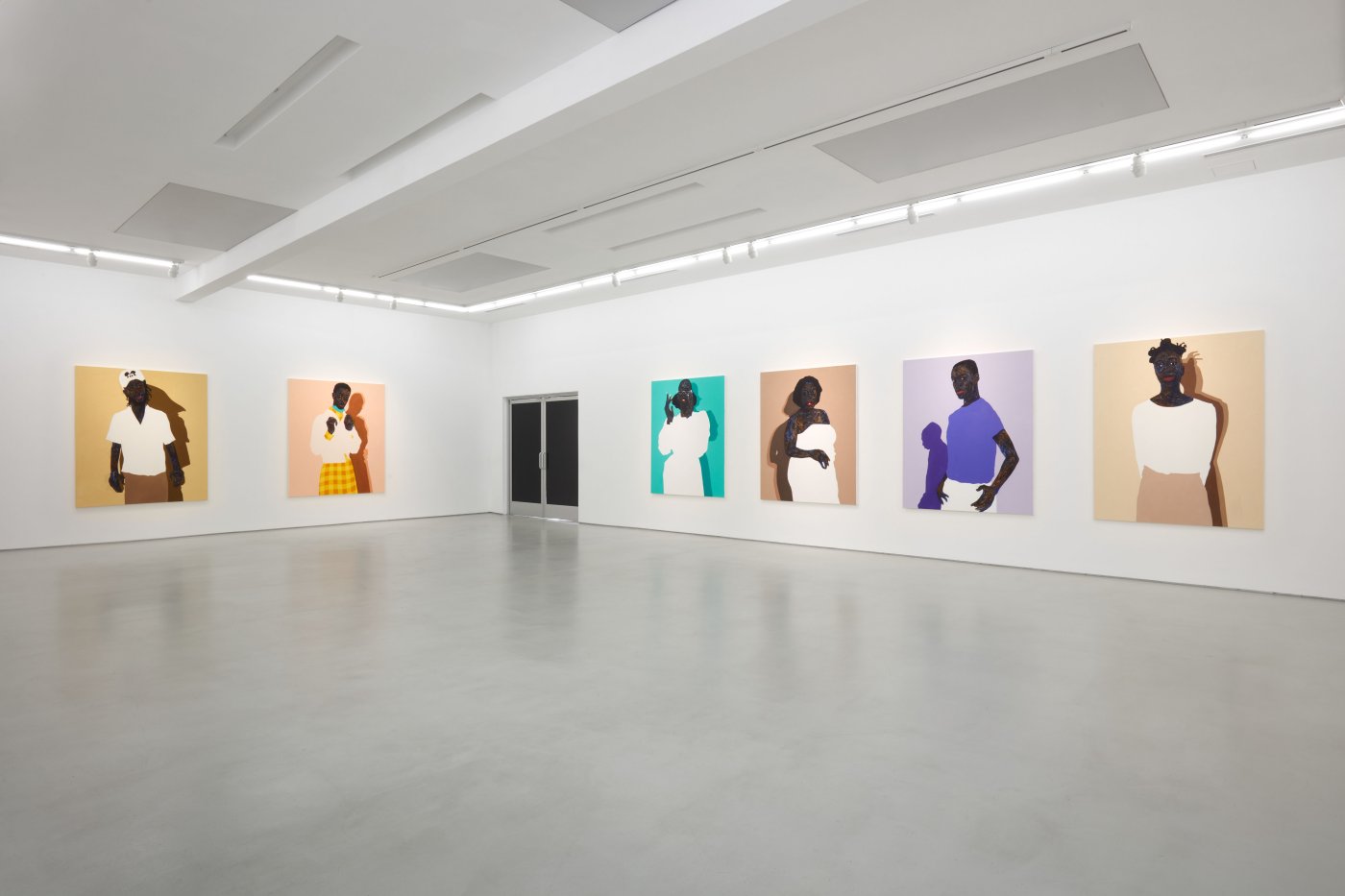 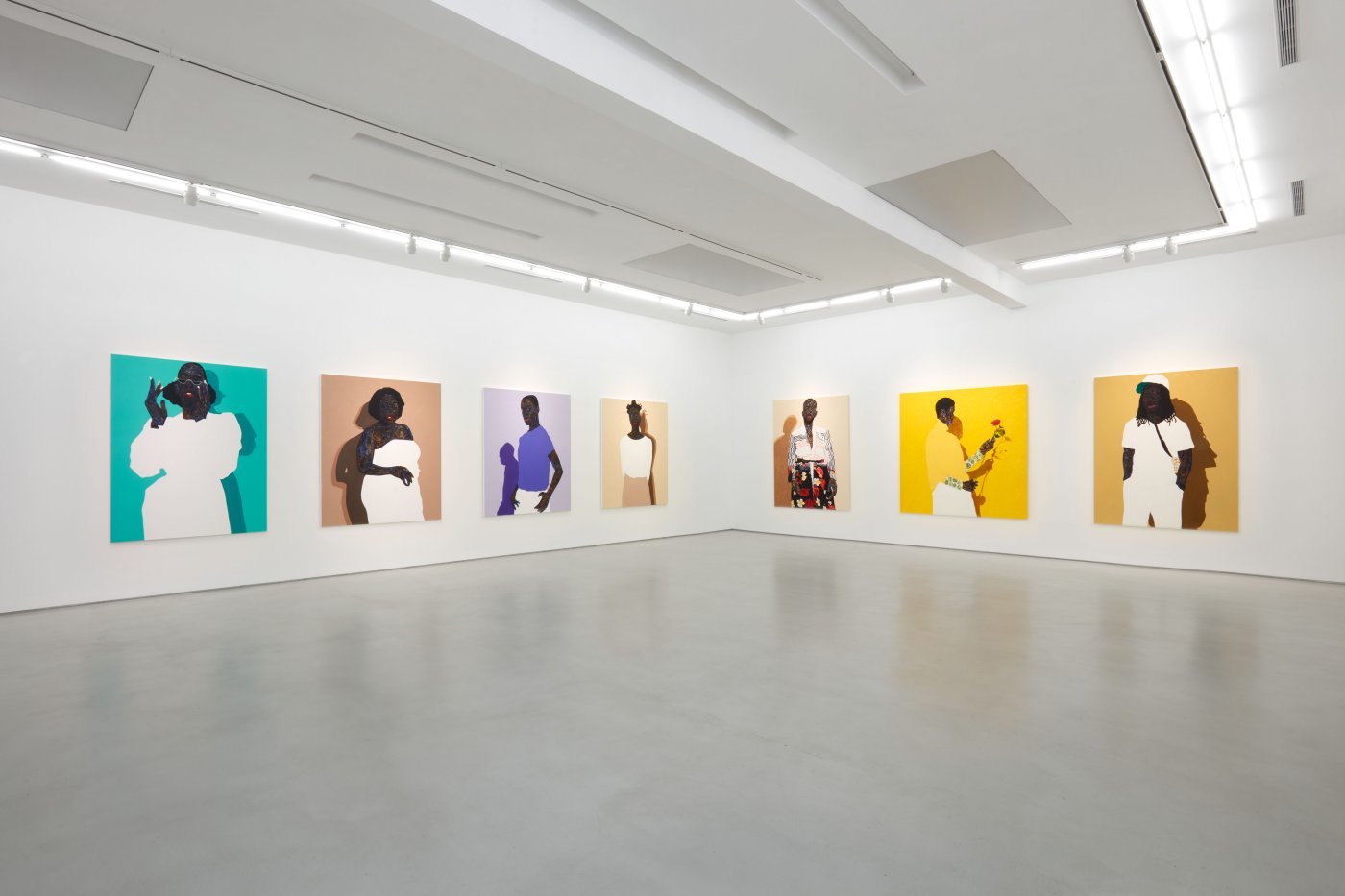 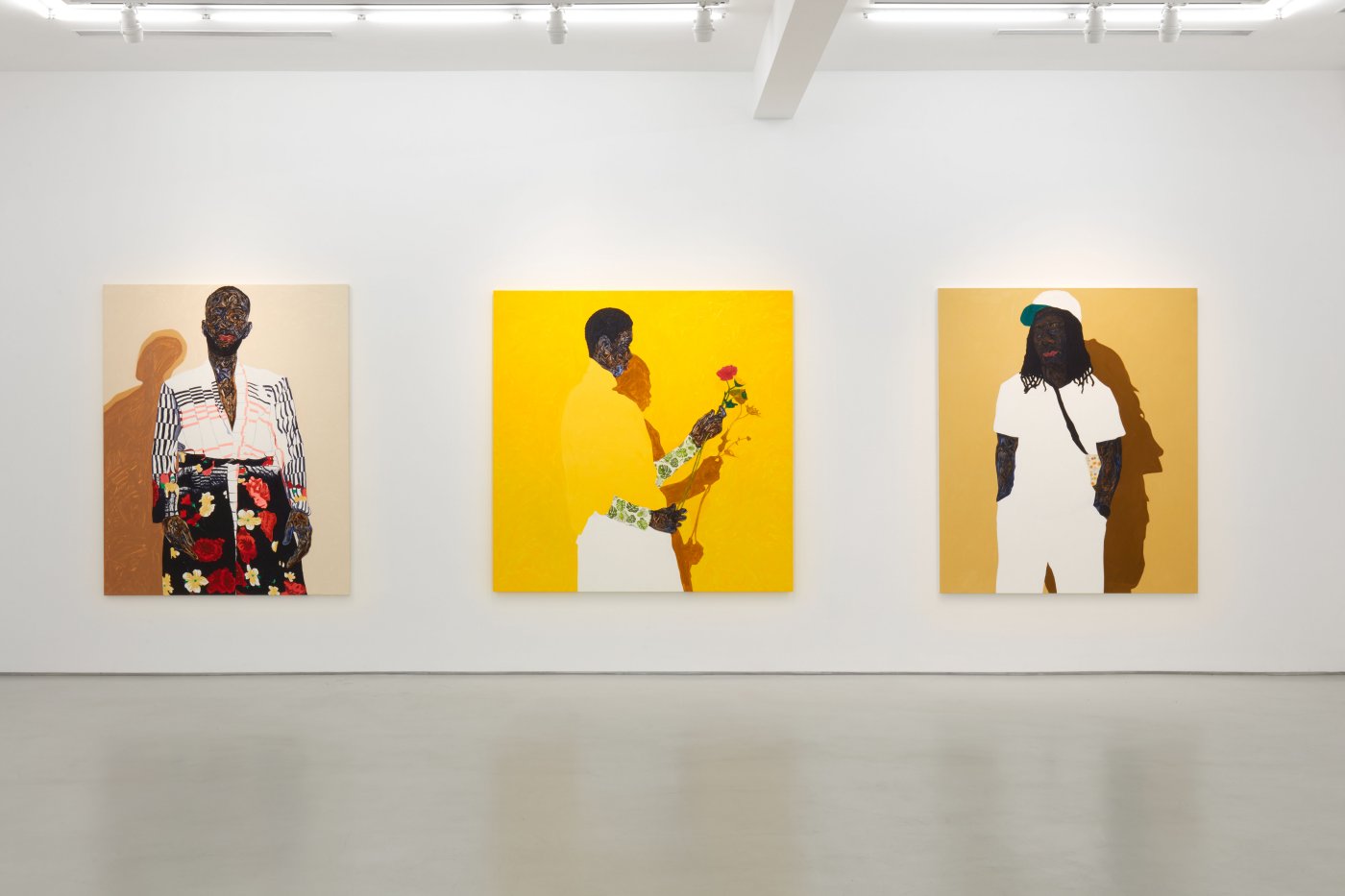 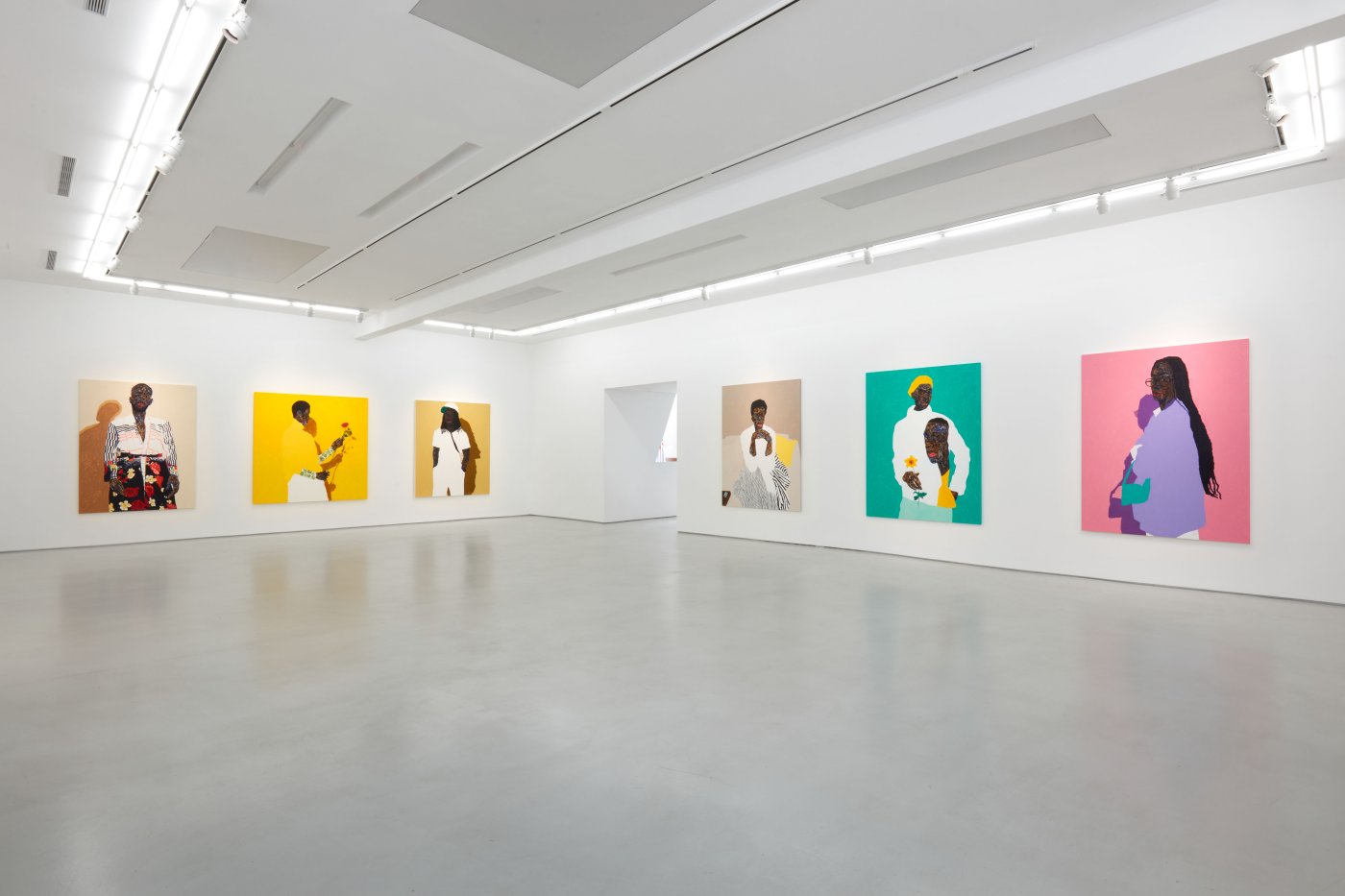 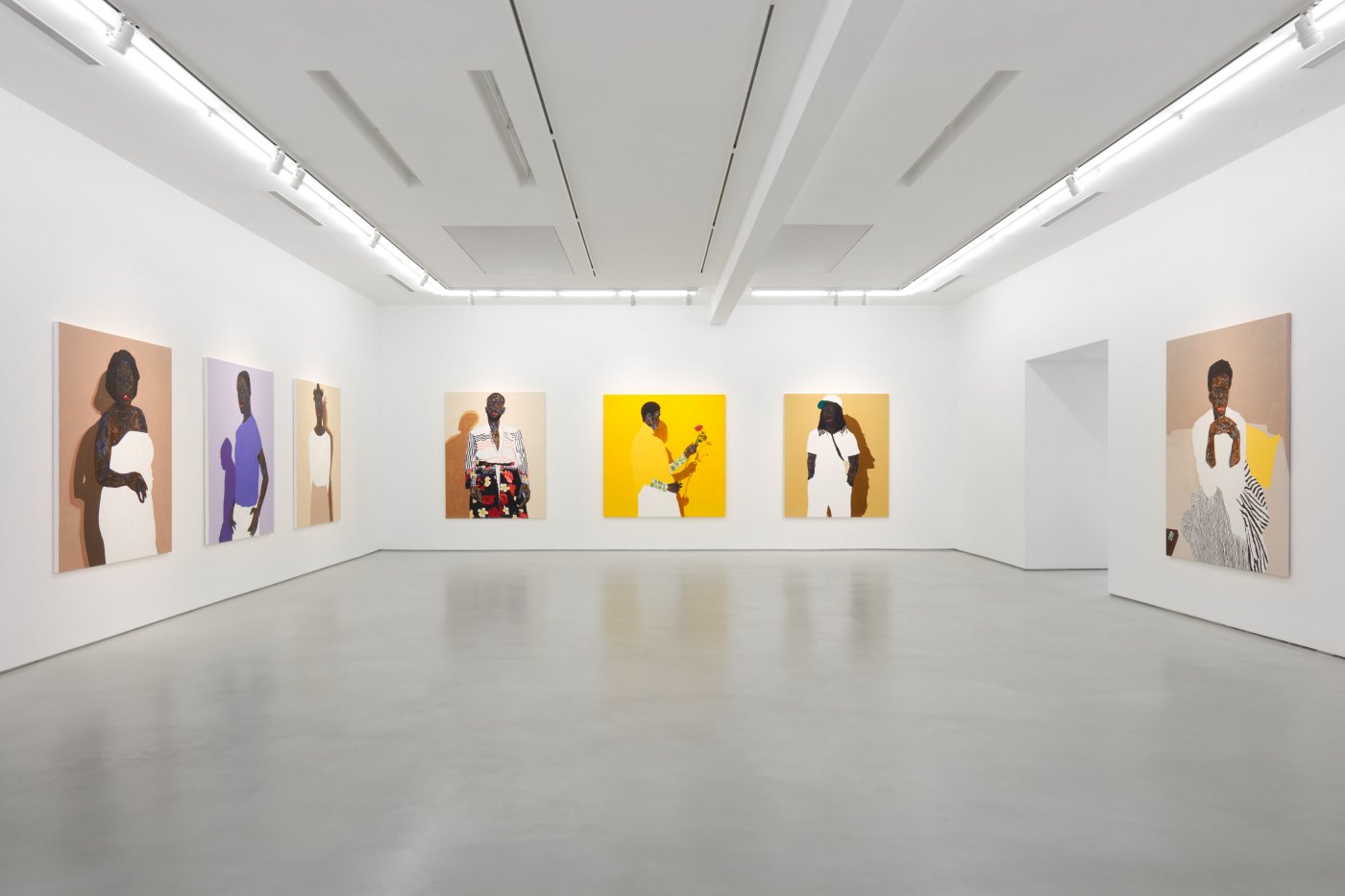 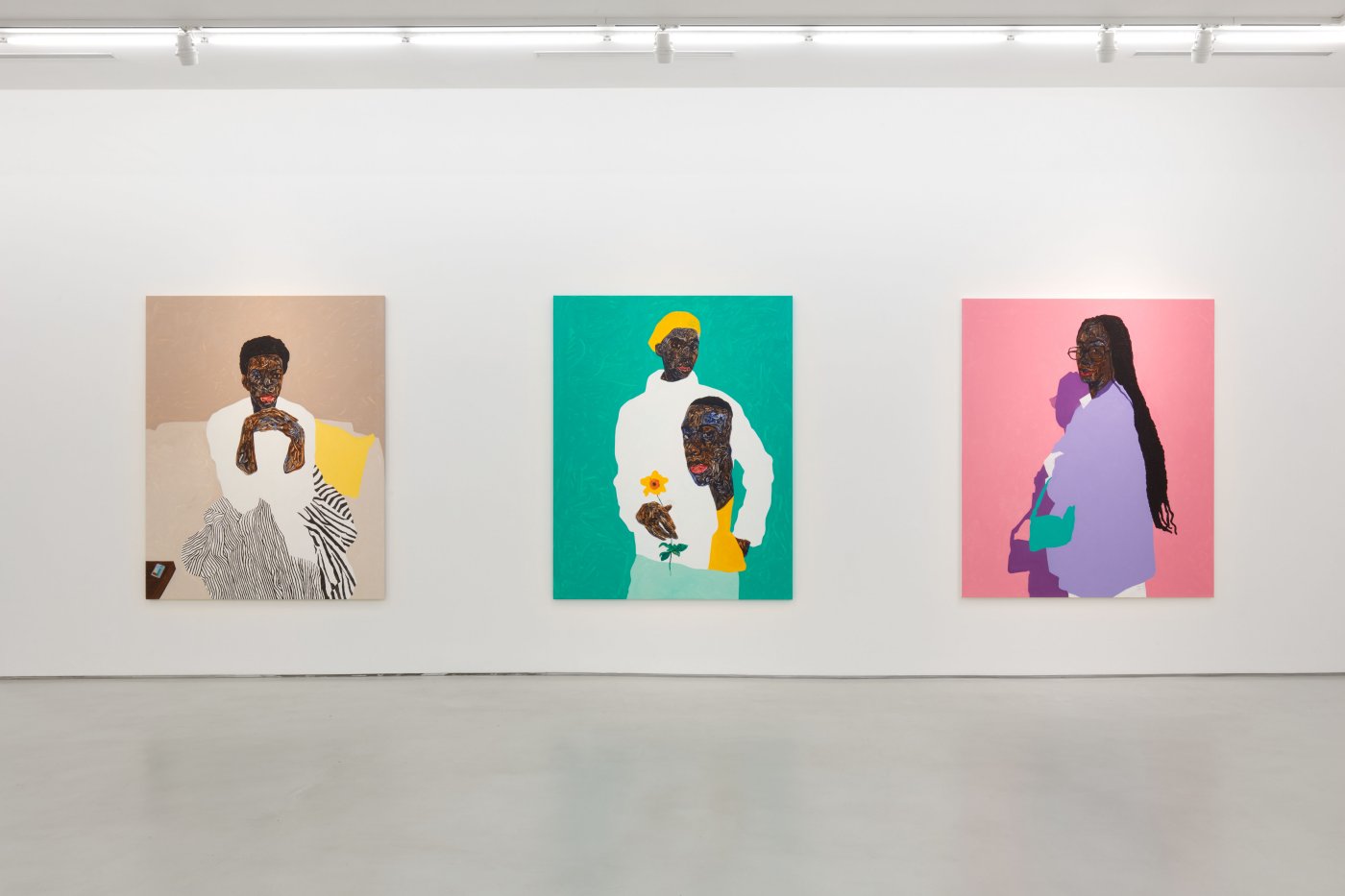 Situated at a pivotal juncture between the artist’s celebrated mode of figuration and the development of a complex visual language, these magnificent new paintings introduce the subject’s shadow. At once connected yet separated, Boafo’s characters are enigmatically coupled with their shadows.

In each of Boafo’s newest paintings, light now casts a shadow, which becomes an image in its own right. Cantilevering outwards, shadows are rendered in muted but still luminous colors. As a result, Boafo’s paintings are now more archeological, more layered. Dark and light do not fuse into one another; rather, they oppose one another. The effect is not unlike Andy Warhol’s Shadow series (1978-79), Goya’s Black Paintings (ca. 1819-1823), or Francis Bacon’s Triptych, May–June 1973 (1973).

This duality, or “two-ness” (Du Bois 1705), informs Boafo’s approach to shape and space and structure taking hold in paint. The visual tension, specifically the shifts between positive and negative space, is a departure from how subjects were previously painted in even light.

All of the exhibited paintings continue to epitomize the bold yet simple colorful silhouettes typical of Boafo’s portraiture. His instantly recognizable strokes, imbued with rhythm and movement, accentuate the confidently applied hues of cerulean blue, yellow ochre, ripe reds and pinks. Loosely applied with his fingers, the paint used to depict skin tones of varying tonalities of black produces an illusion of three-dimensionality. Boafo also advances his earlier technique of using appliqué, transferring patterns from gift wrap papers to obtain rich textural effects to the paint surface. The emphasis is not merely to paint the figure, but to cultivate an atmosphere where, through texture and materials, reality is alchemized.

Boafo’s limitless diversity – as it relates to both his characters and himself – continues to prompt discussion on the complexities of identity, community, and race. Depicting people both within and outside his intimate circle, Boafo’s characters occupy the dominant space of each composition. Emotionally poignant, at times melancholic, expressions reveal the subject’s character and state of mind. Domestic settings and relaxed, natural poses grant further insight into Boafo’s relationships with his characters. Artists, writers, models or friends, these are men and women he celebrates through his portraits.

Monstera Leaf Sleeves (2021) exemplifies Boafo’s exploration of the relationships between color and form, showing and hiding. Set against a dramatic yellow background, a young man in profile admires a clasped flower. He is isolated from the rest of the composition as the main focal point, joined only by the double-capture of his shadowed body. Stylish Overcoat (2021) shares the same characteristics. There is a conspicuous interaction of light and dark interplay between the main figure – a man stylishly outfitted in colorful clothing – and his shadow, which enveils him as would a halo.

In an essay recording his confrontation with the work of Francis Bacon, Gilles Deleuze articulates how “the shadow escapes from the body like an animal we had been sheltering” (Deleuze 1981). Within each of Boafo paintings, there is a process through which each of his characters can engender their own experience, whereas their shadow forces a negotiation between intention and the actual world. Jung believed the shadow cast by the unconscious mind contains the hidden aspects of the individual (Henderson 1964); Boafo contends that our shadow, or alternate reality, knows us better.

Boafo’s painting is, at its core, a highly personal record of his and our existence during an extraordinary time. The desirous combination of the yearning and the deluge reflects on his and our moment: the coronavirus pandemic and its fallout; the impact of racial inequity; the effects of fame; balancing daily life; an uncertain, troubling future. He asks us how to discern between the two desires at odds in all people, and whether there is a possibility of redemption through growth?

In seeking to remake the world in his own image, Boafo navigates the shadow cast by his own path. His individual style remains influenced by movements that include The Vienna Secession, though it is his contemporary sensibility that ensures his work looks to the future rather than to its past. Rather than simply painting what is there – witness his earlier work – Boafo’s pursual of the psychological depth of pictoral representation (Gombrich 1956) moves his ideas onwards.

In this evolution, Boafo’s works find new meaning. With this show Amoako Boafo expands from superb Black representation to portraits that chart and encompass the totality of the human experience.

Portraying individuals from the Diaspora and beyond by highlighting self-perception and beauty, Amoako Boafo invites a reflection on Black subjectivity, specifically of its diversity and complexity. His portraits are notable for their bold colors and patterns, which celebrate his subjects, as a means to challenge representation that objectifies and dehumanizes Blackness. Able to capture critical subtleties and nuanced emotion in a manner that grabs and engages the viewer, it is however Boafo’s tenderness in how he renders his subjects that is the most striking quality of his practice. His powerful, concise style expresses the vibrancy of daily life with an easy familiarity, touching on topics such as community collaboration, social and political struggles, and the intimacy between like-minded friends.

Throughout his practice, Boafo centers Blackness in all its multitudes. In 2013, he co-organized WE DEY, a space in Vienna dedicated to amplifying the perspectives and experiences of Queer, Trans, Black and People of Color through exhibitions, workshops, and talks. His critically received 2021 Dior collaboration, opened up a new dynamic in his work, and introduced his characters across a larger stage. Boafo’s latest efforts see the building of artist residency and permanent collection in Accra, the first of its kind in his hometown.

Born and raised in Osu, Accra, Ghana, Amoako Boafo studied at the Ghanatta College of Art and Design in Accra in 2007, before attending the Academy of Fine Arts, Vienna, Austria for his MFA. Boafo was awarded with the jury prize, Walter Koschatzky Art Prize in 2017 and the STRABAG Art award International in 2019 both in Vienna, Austria. His first solo exhibition in the United States, entitled “I See Me,” opened at Roberts Projects in January 2019. Boafo was the first artist-in-residence at the new Rubell Museum in Miami, FL, which launched in 2019, organized through Roberts Projects. In 2020, the artist collaborated with Kim Jones, Dior Men’s creative director, for Dior’s Spring/Summer 2021 Men’s Collection. In 2021, Boafo was selected by the Uplift Art Program to create the inaugural “Suborbital Triptych” on the exterior panels of a Blue Origin New Shepard rocket, to launch August 2021.

A fully illustrated first monograph surveying Amoako Boafo’s career to date is scheduled to be released by Roberts Projects in early 2022. The book will be distributed globally by Artbook D.A.P.