In her fourth exhibition at gallery MEYER*KAINER, Amelie von Wulffen quotes from her extensive solo exhibition at KW Institute for Contemporary Art, Berlin (2021), for which the artist created a brilliant overall installation of paintings and objects. 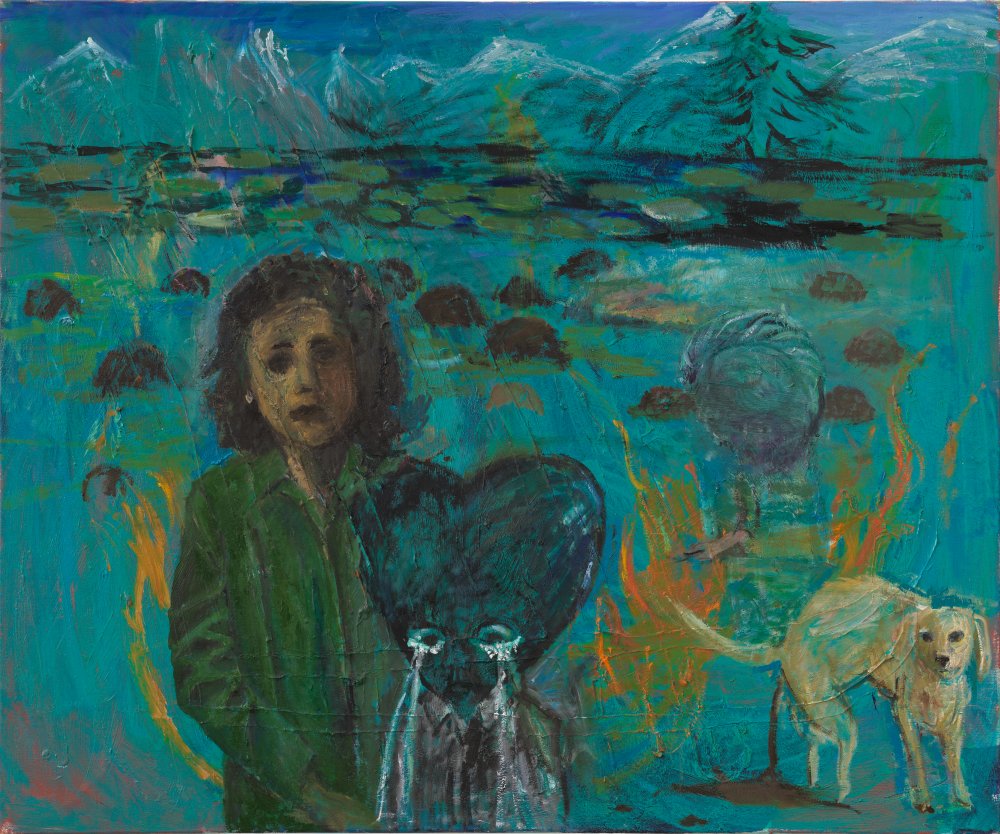 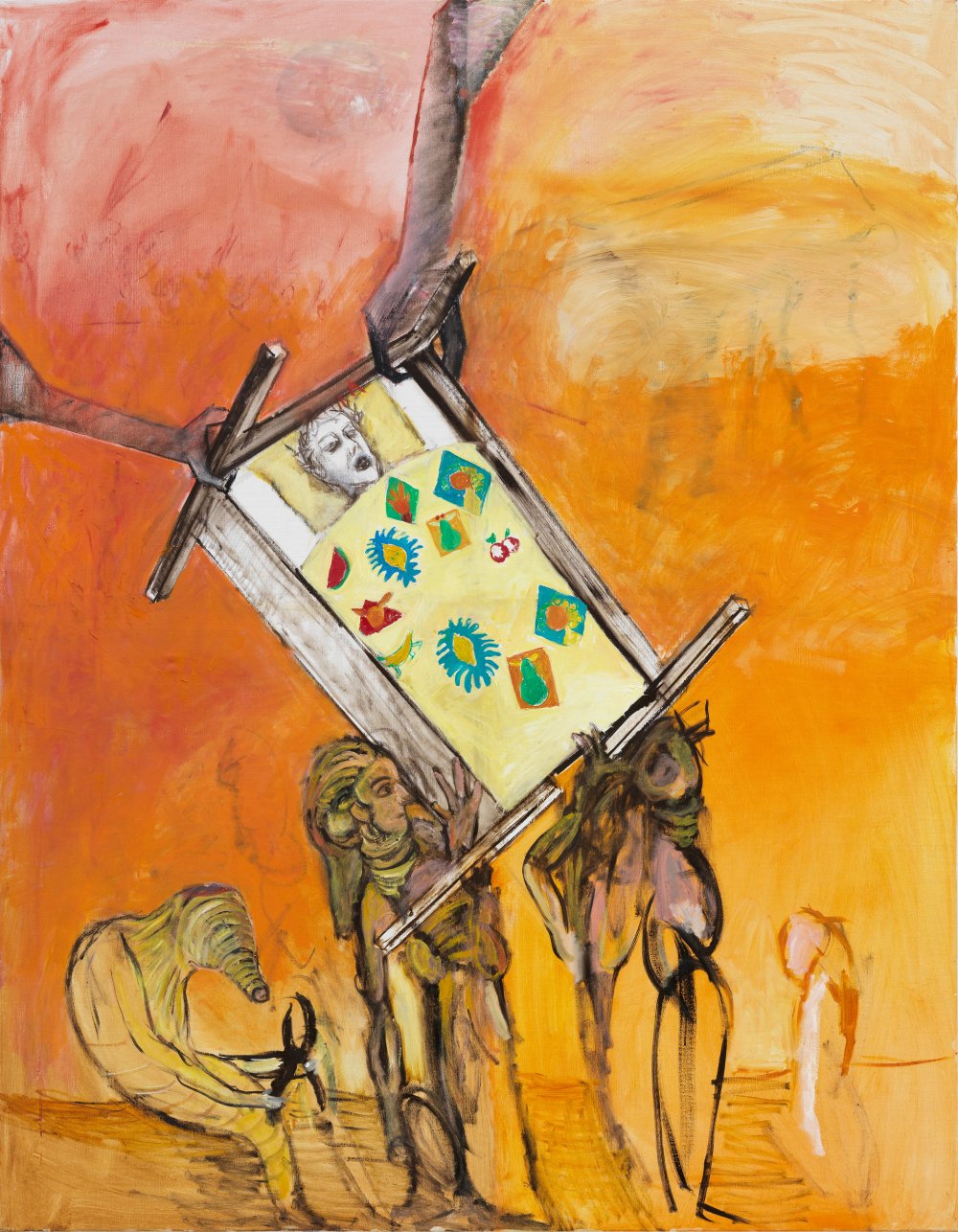 Amelie von Wulffen
this is the end, 2021 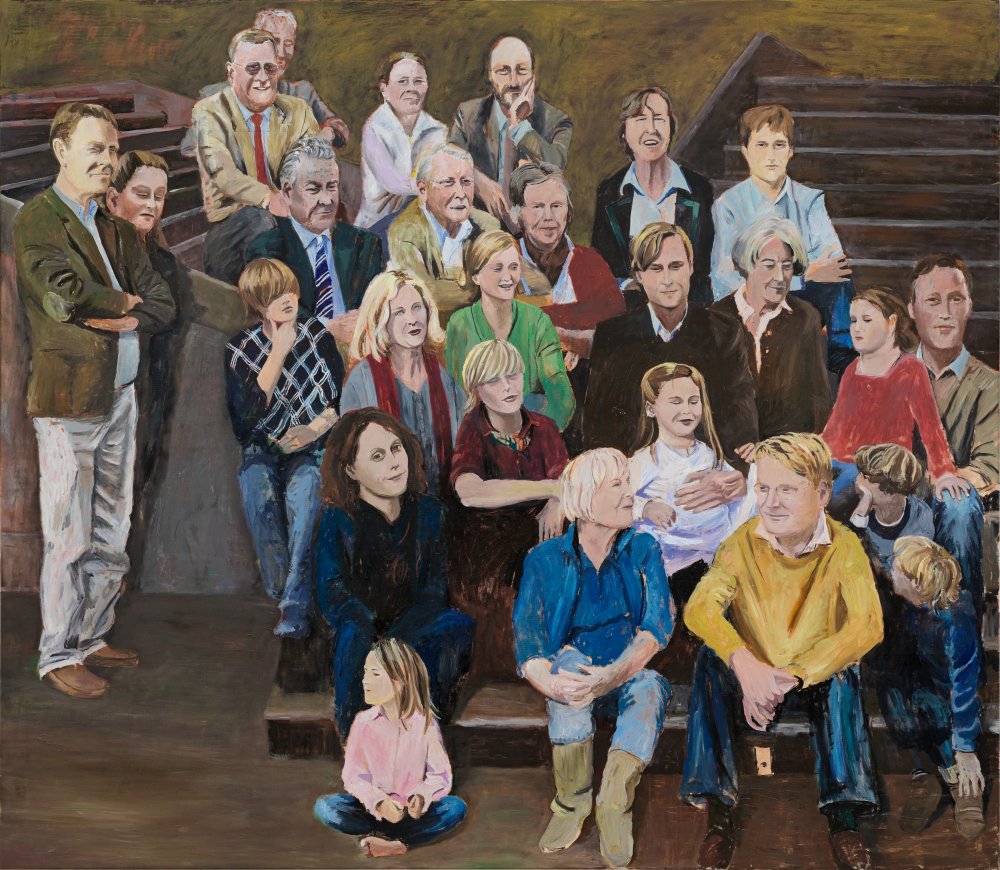 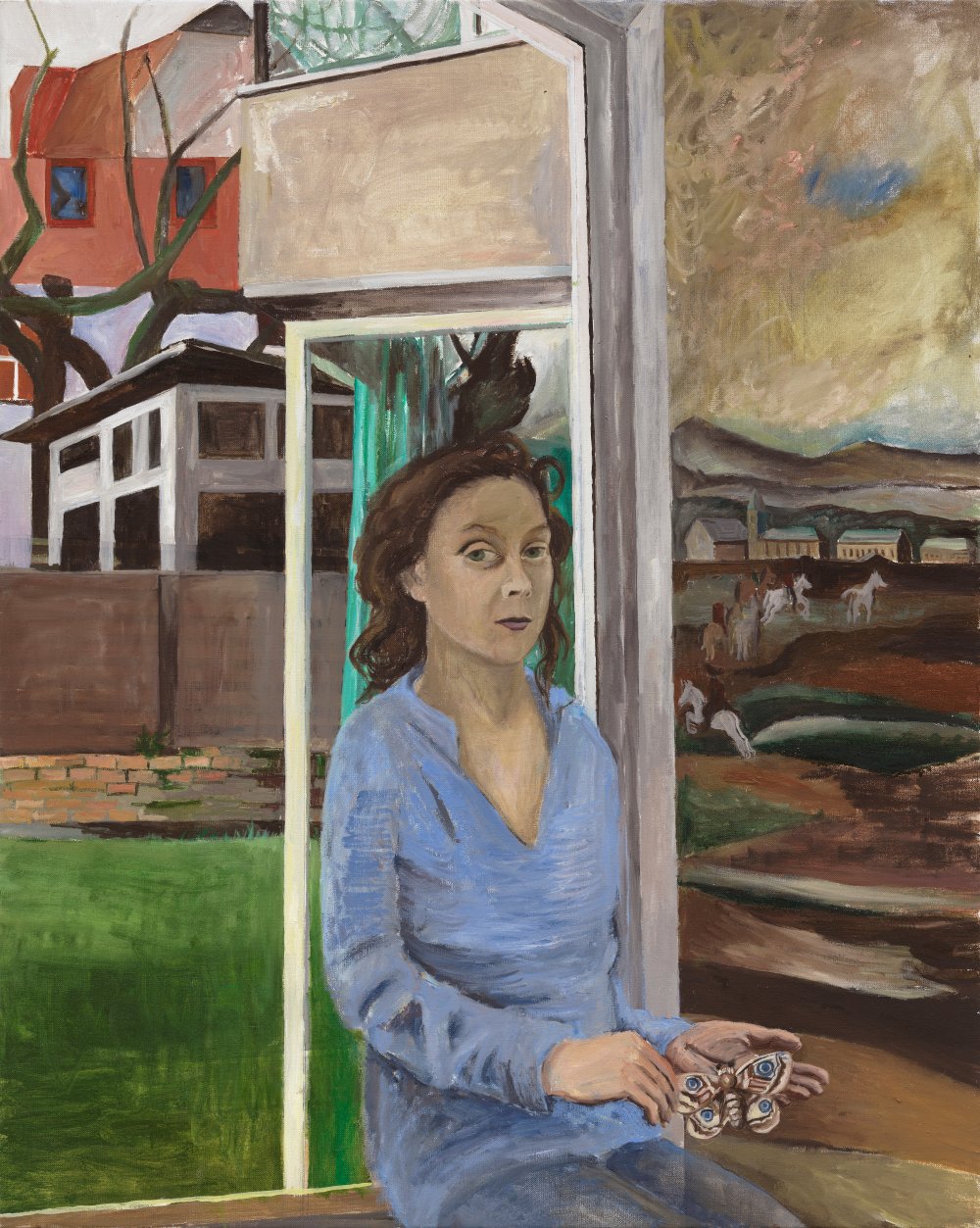 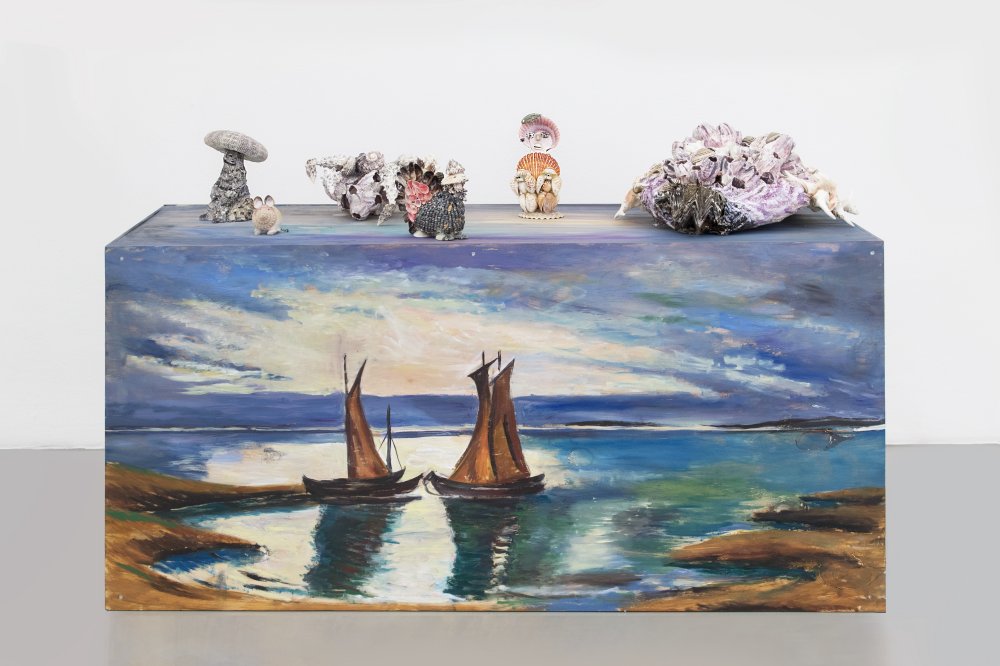 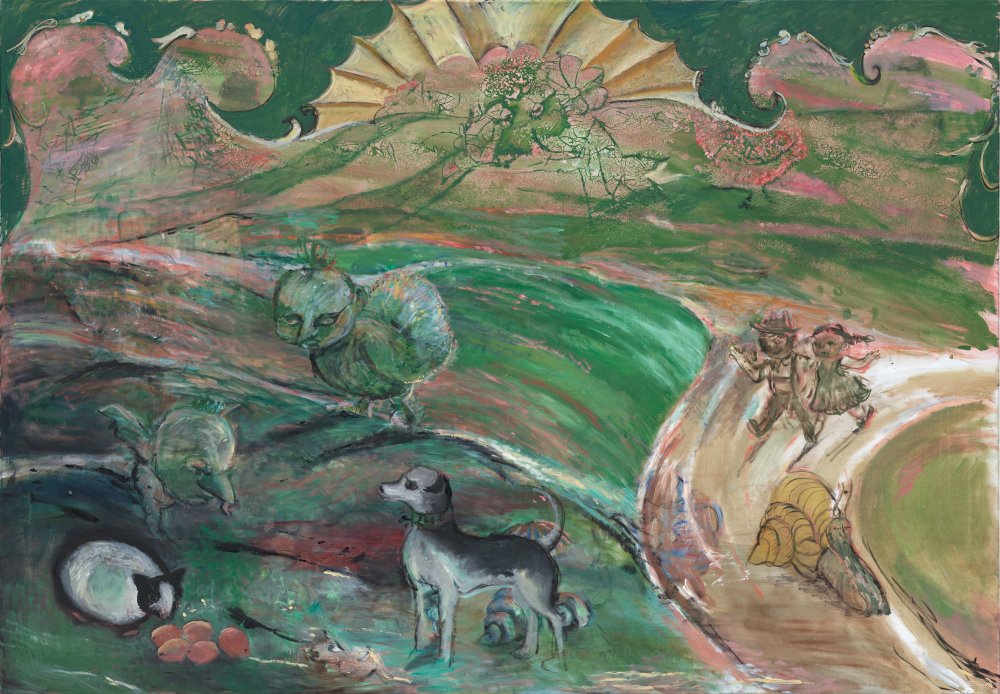 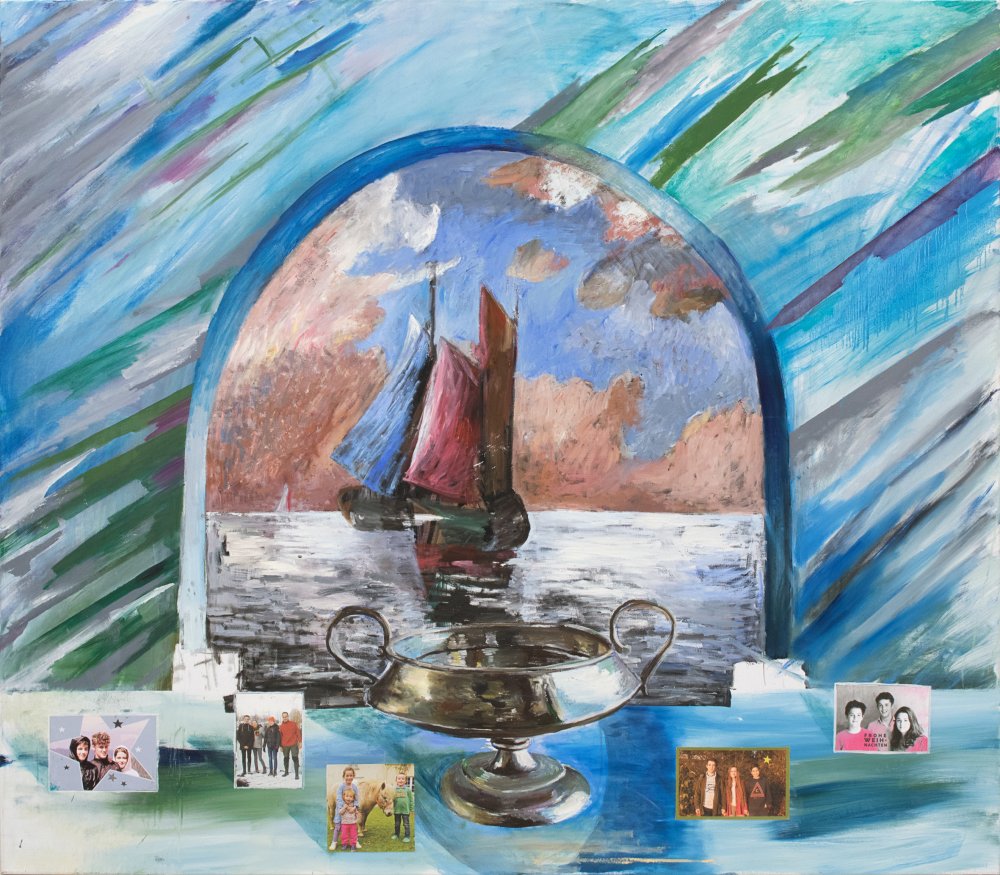 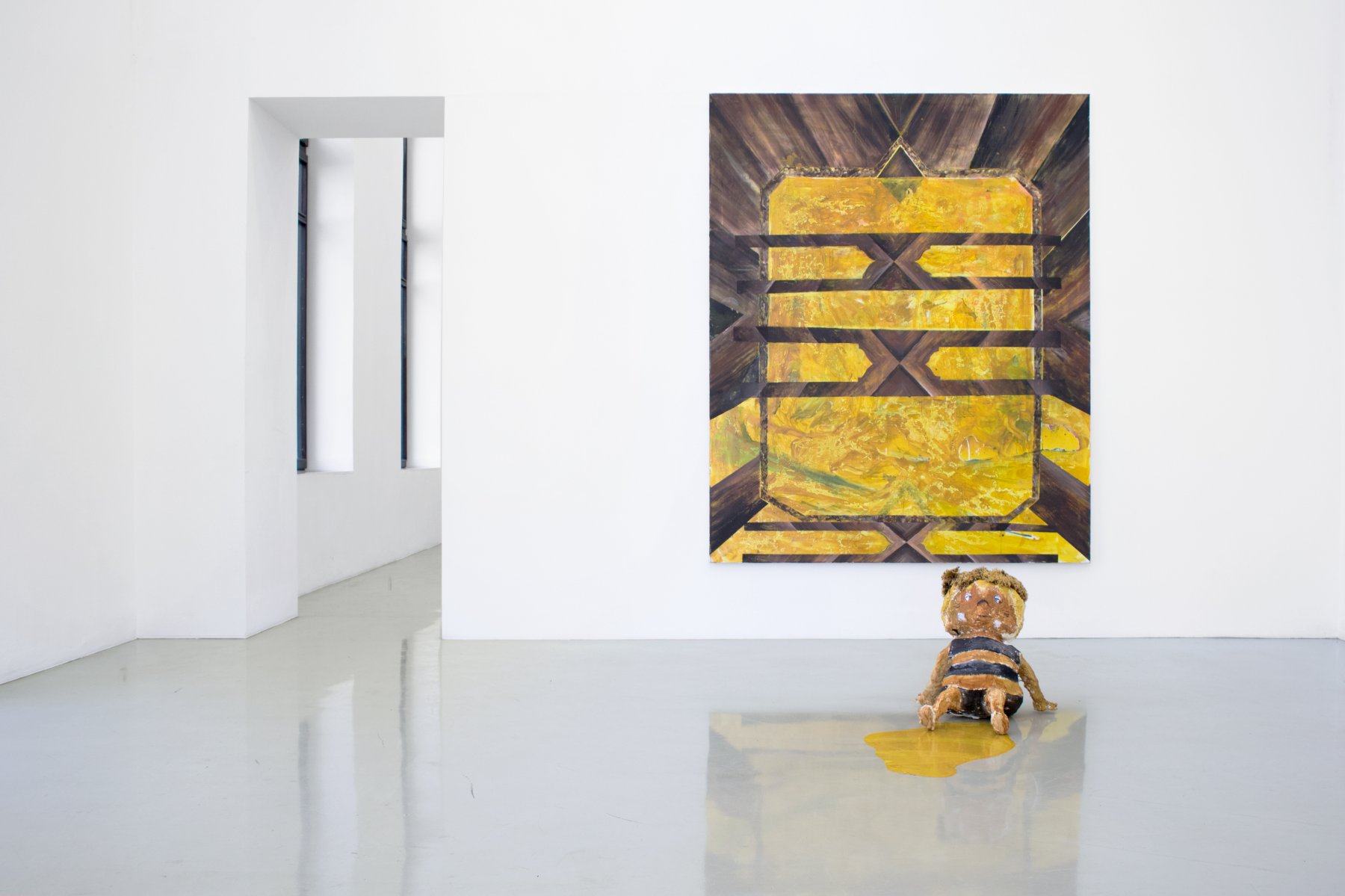 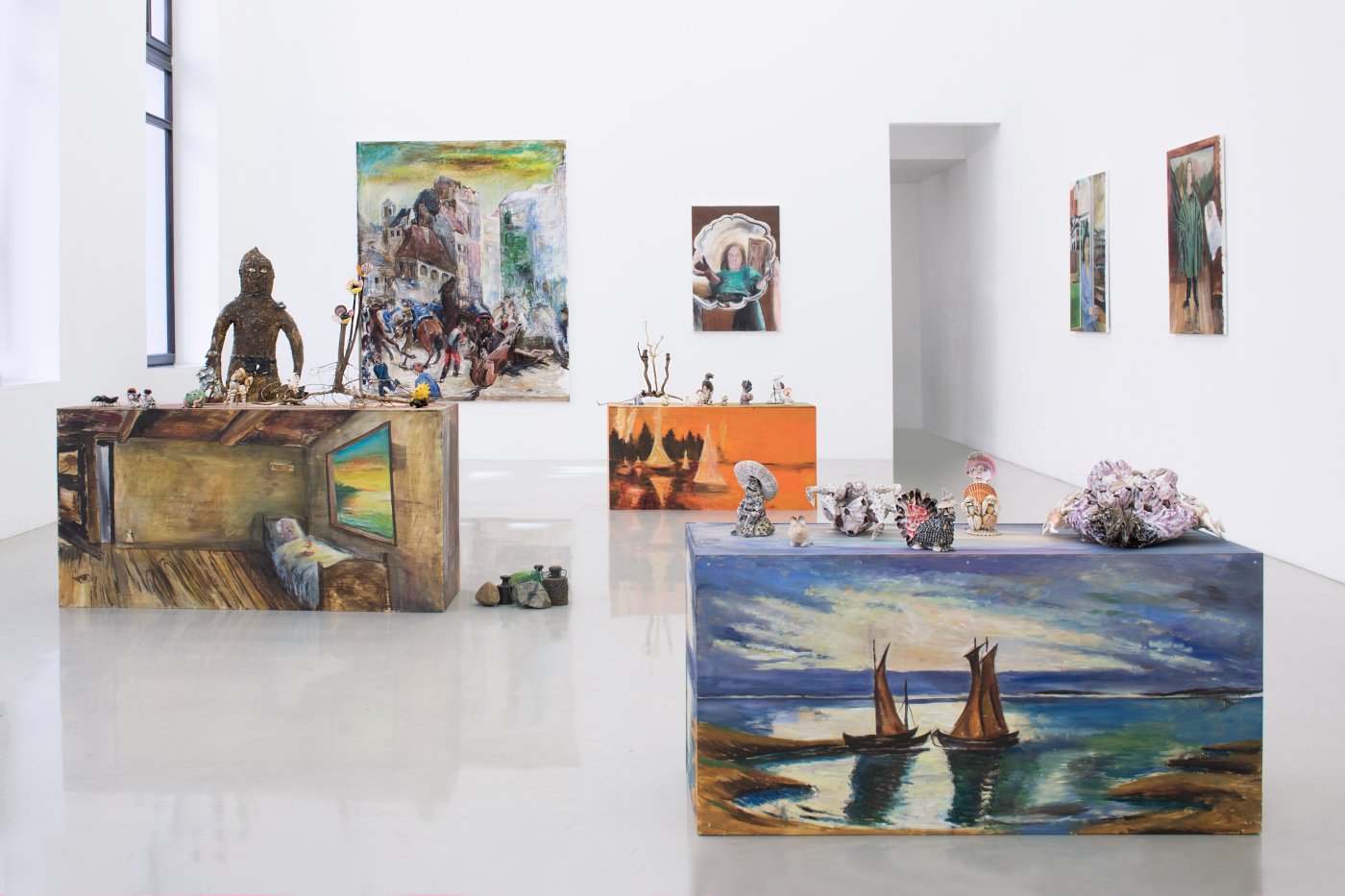 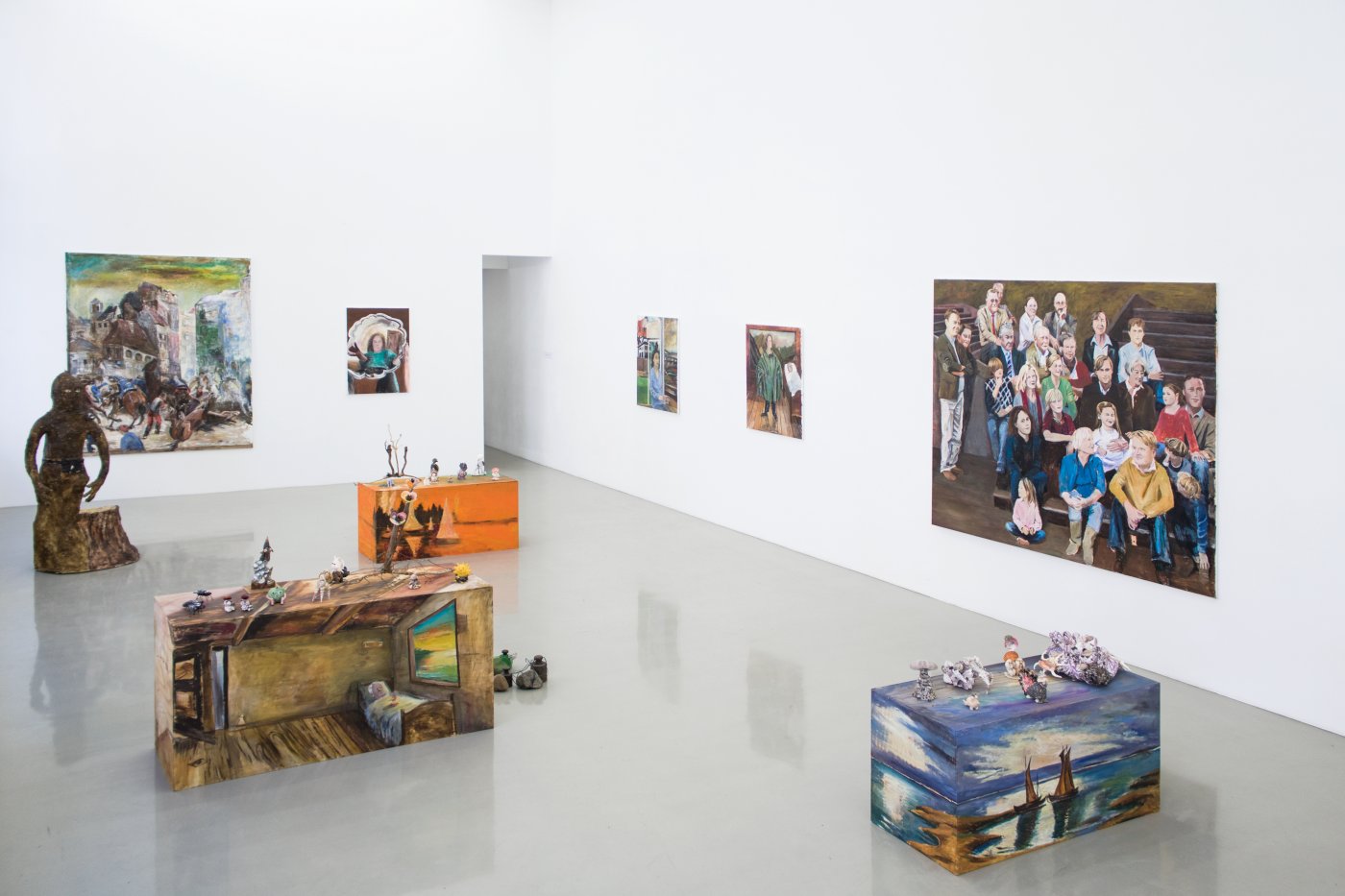 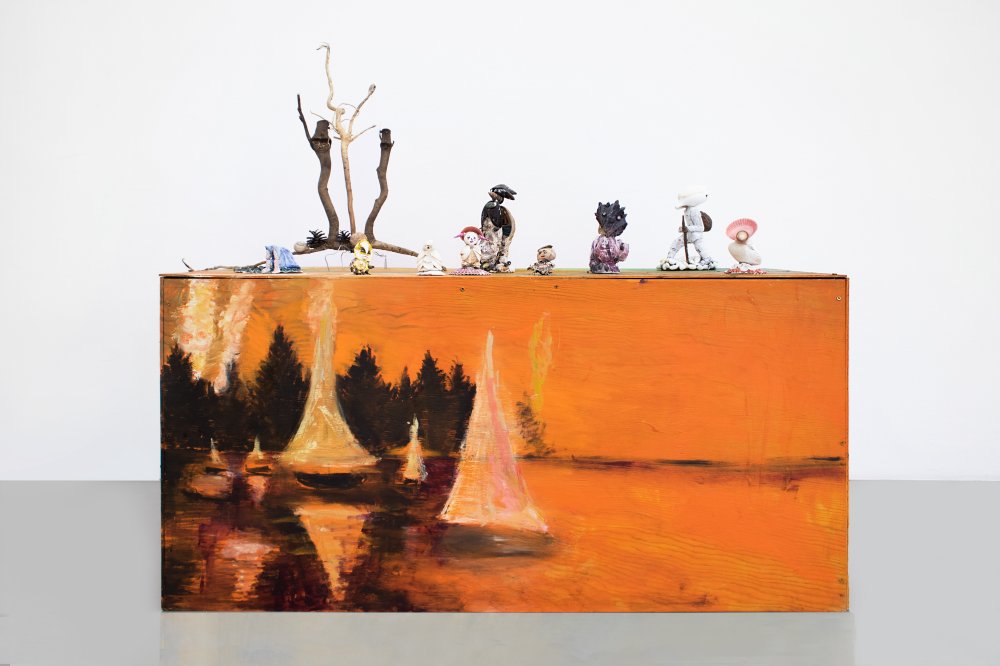 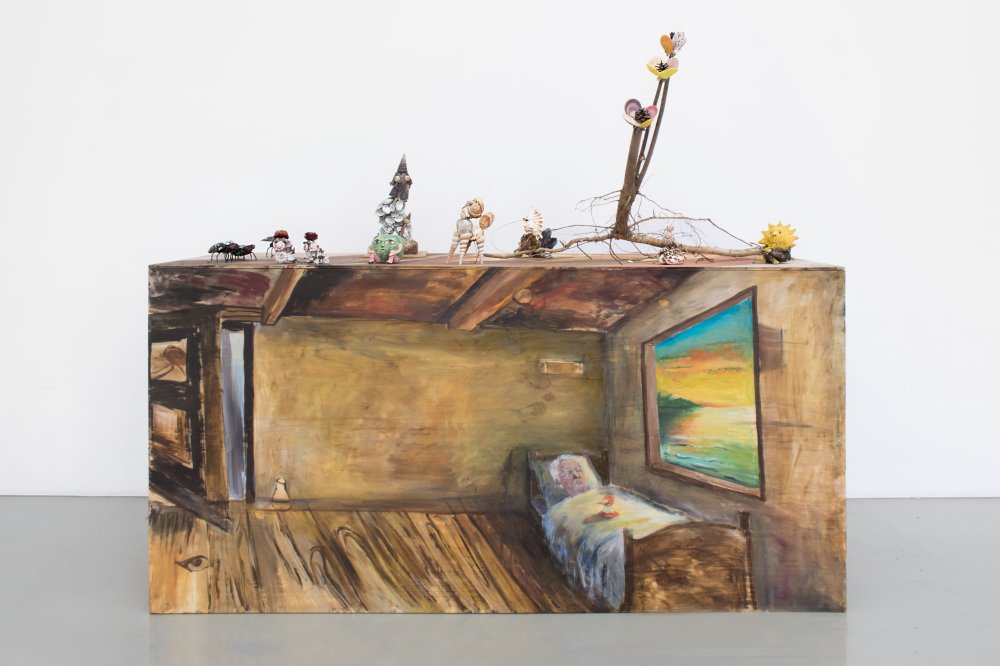 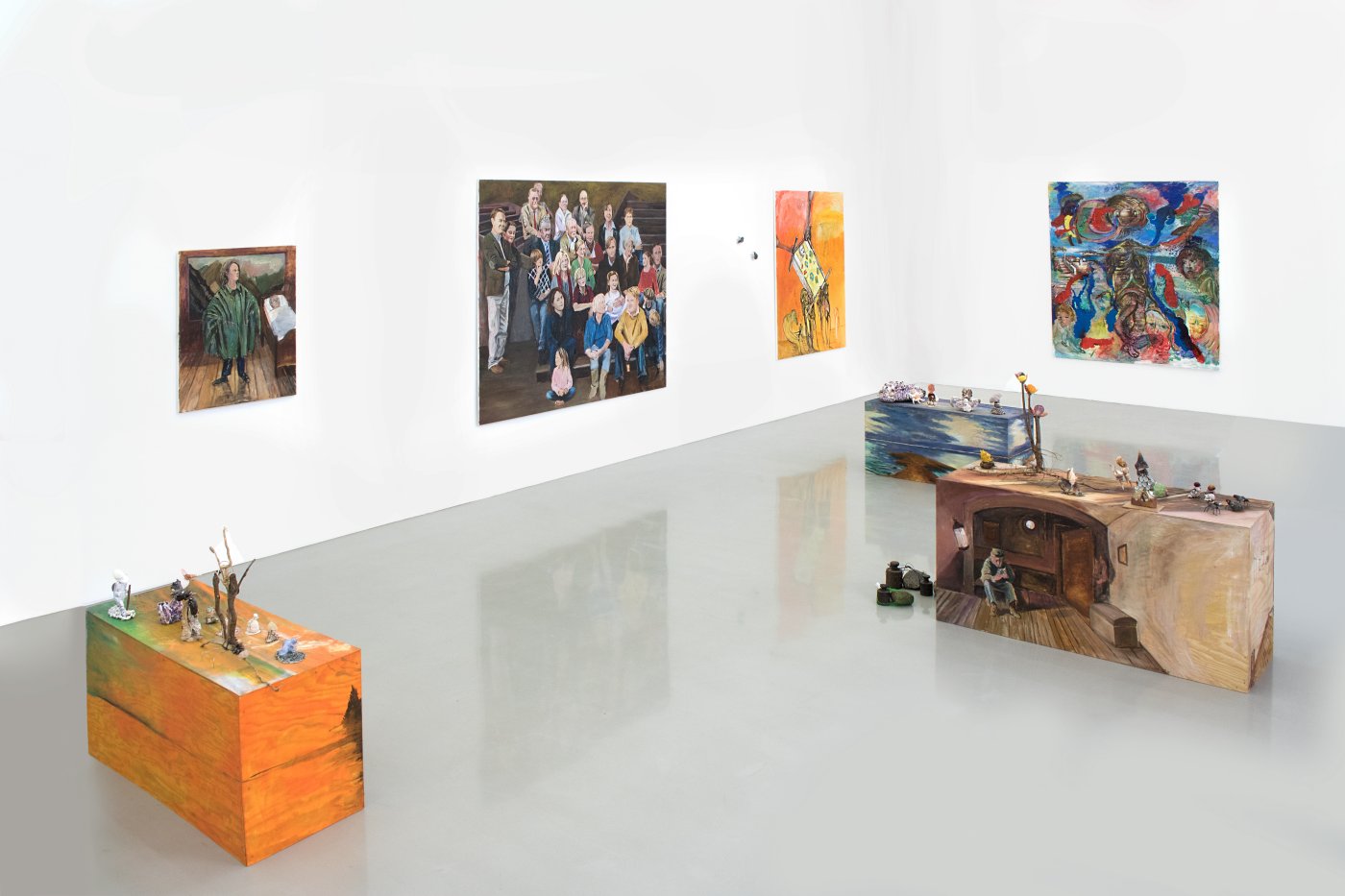 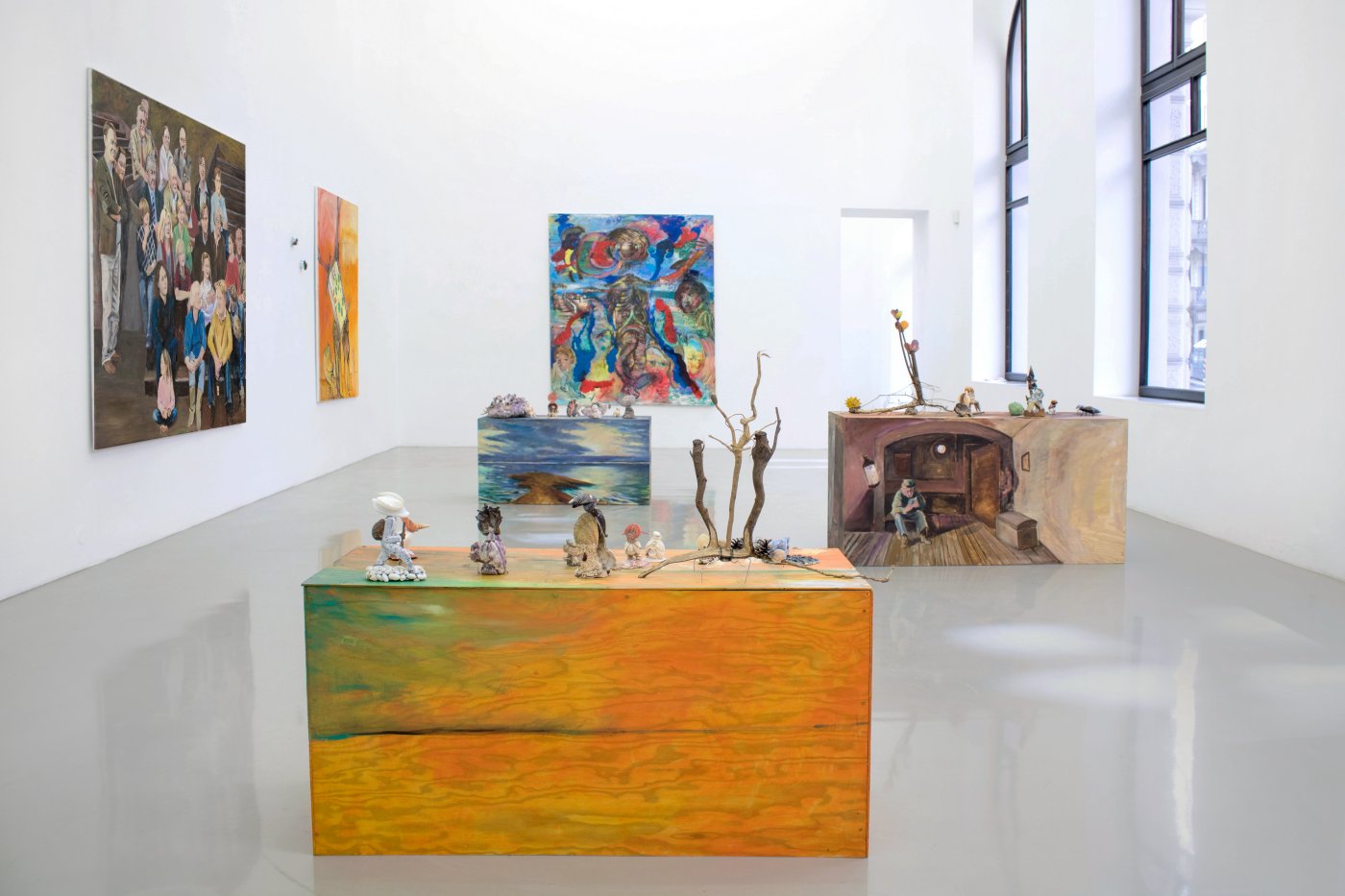 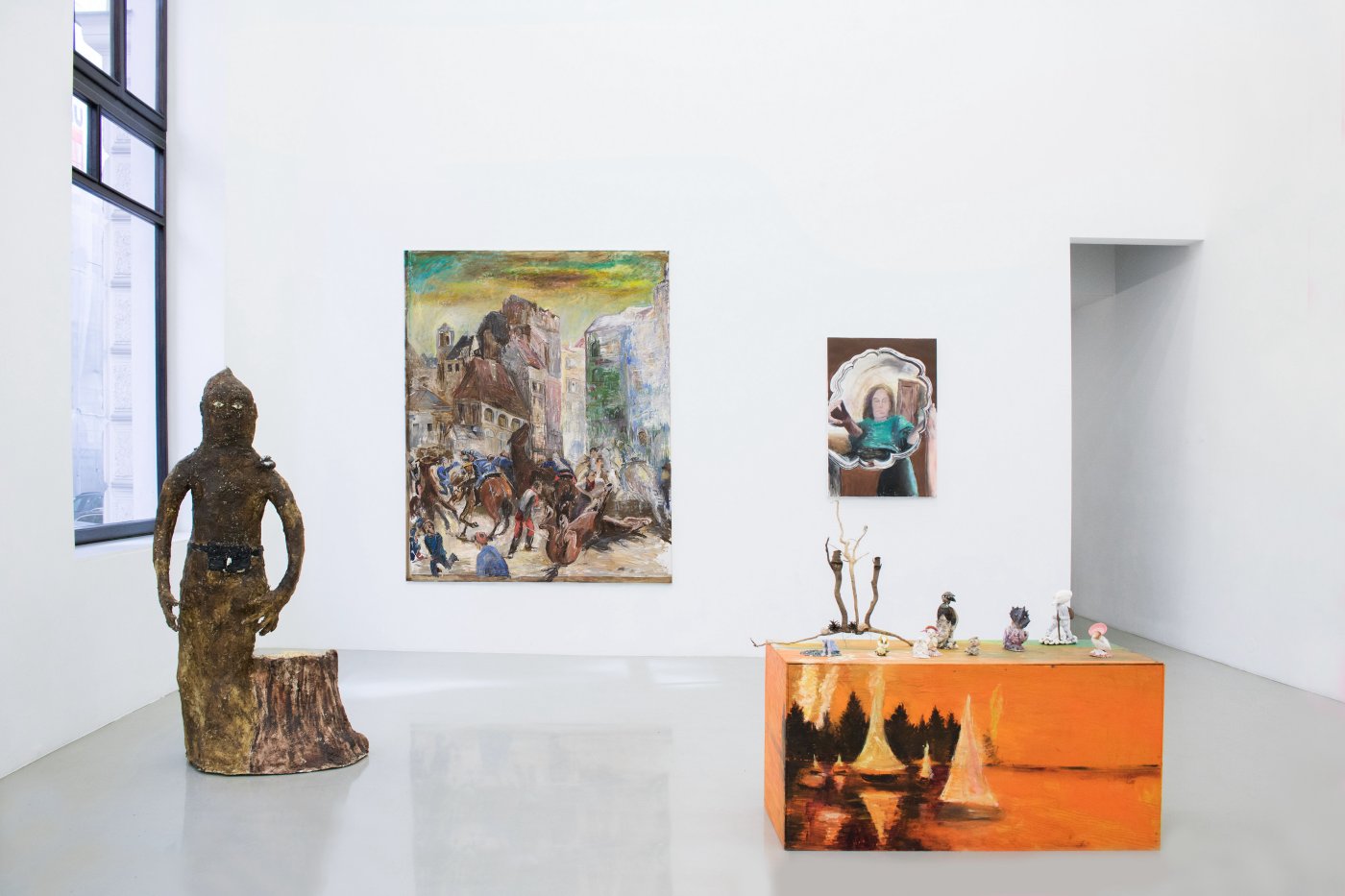 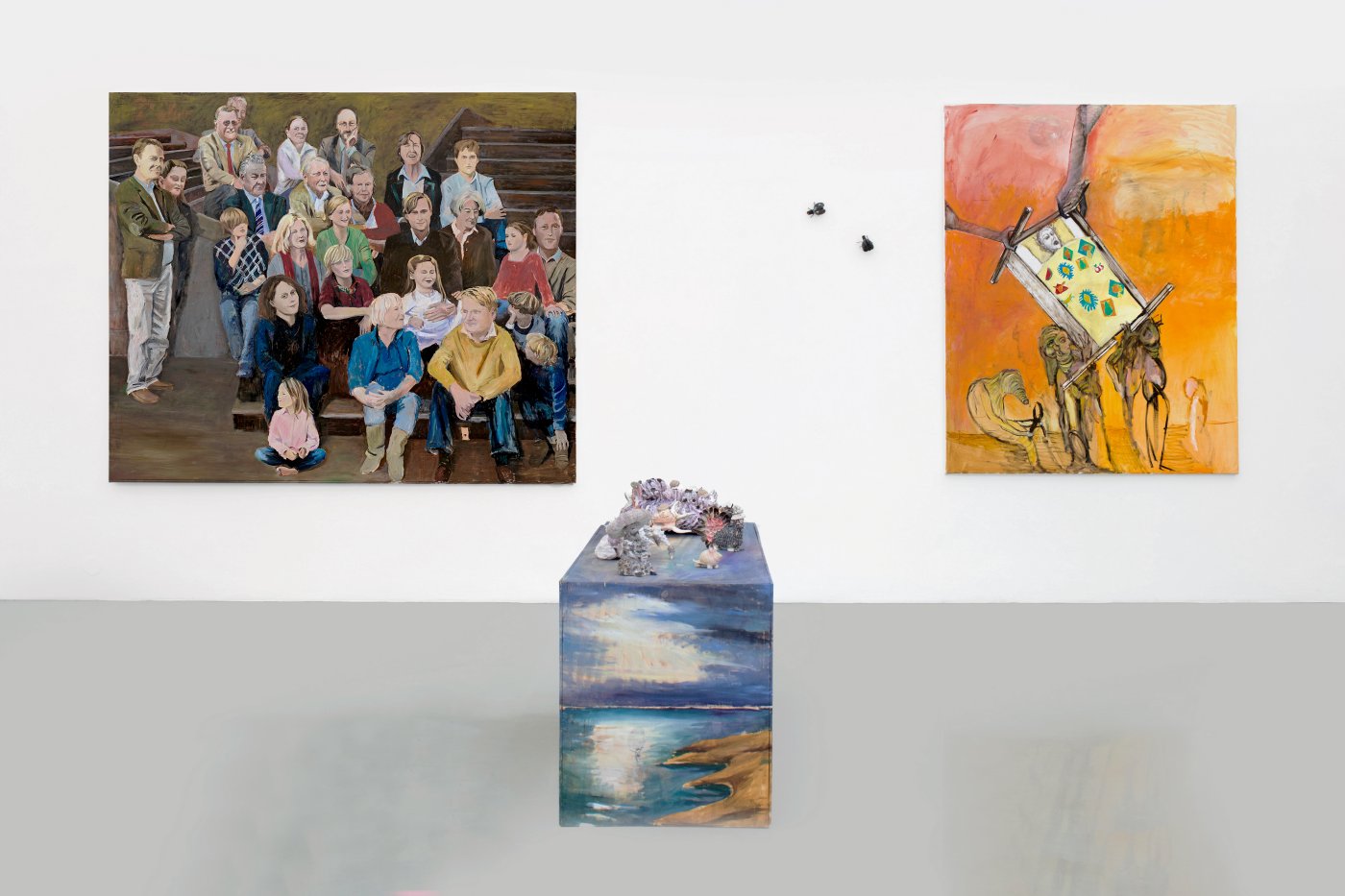 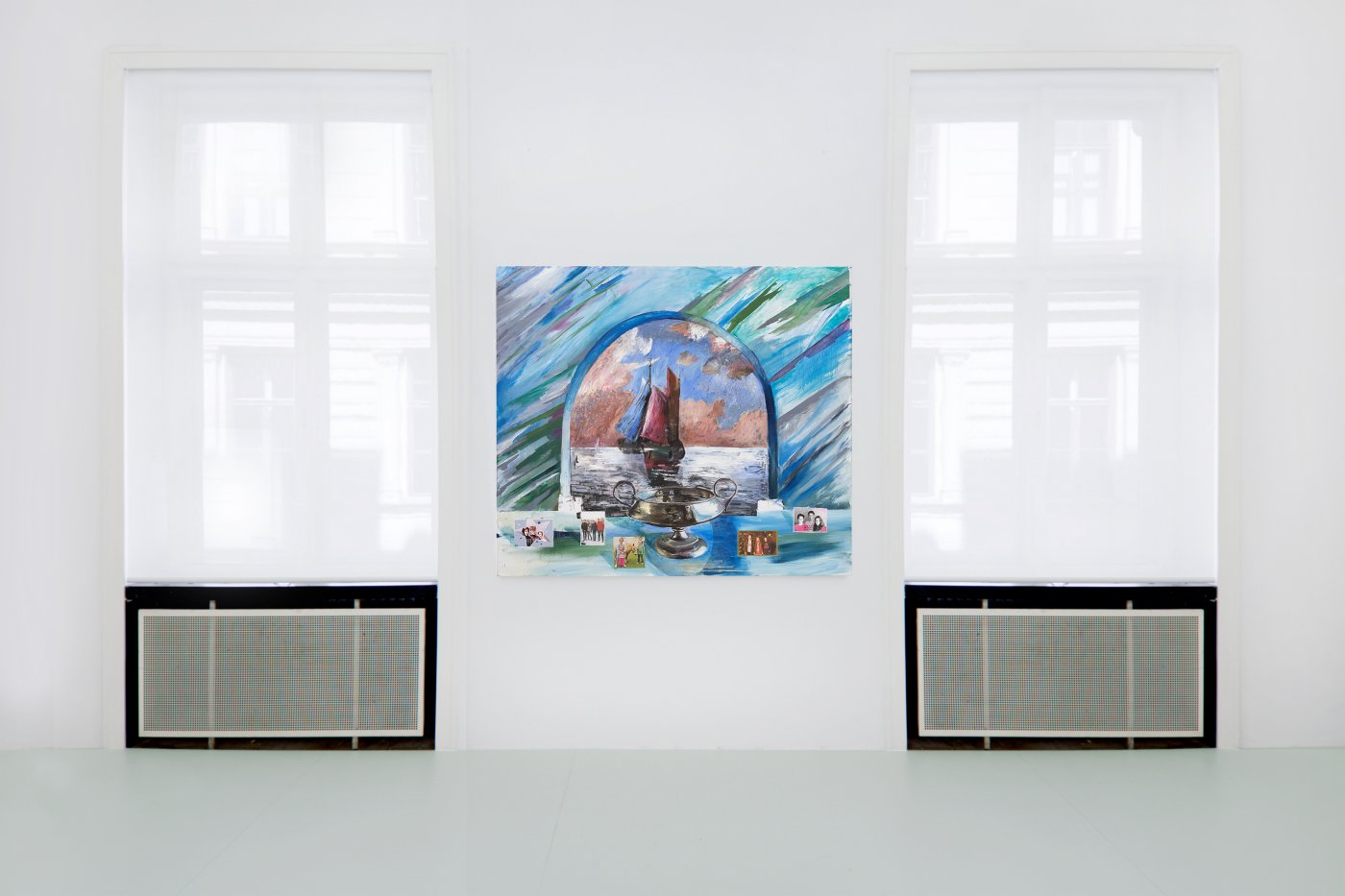 A traumatic chamber of curiosities, consisting of anthropomorphic object collages, shell figures, wood, and moss on painted plinths, in the center of which stands a man-high “turd man” with a fanny bag (untitled, 2020) and Maya the Bee sitting on the floor and peeing her pants – yellow piss, which is reflected in the stripes of the bee sculpture and also in the geometric pattern on the abstract painting in the background. A psychological metaphor related to art and money, but it is also a suppressed indication of creatureliness and mortality. Since antiquity, the beehive has also been a symbol of an apparently natural order in questions of gender-specific division of tasks, gender difference, living together, marriage, household, and family.

A wild combination of dream and joke, in which the unconscious and the suppressed, the
subjective and the objective, the political and the artistic, balance each other and reflects the artist’s own involvement. In addition to well-known social and art-historical themes, the newly created paintings focus on the abysmal dimensions of childhood and family, whereby von Wulffen repeatedly links her own family chronicle with national (German) history. “Brown” undertones, family, and genre scenes in a pseudo-romantic, rural idyll meet set pieces from art history. Ice cream flavors such as Magnum, Cornetto & Co frame the scene, timeless triggers for childlike substitute satisfaction.

“Musische Mutter (2019) is also a family setting. There, finely dressed but roughly painted pigs listen to a woman playing the guitar, a colorfully dressed piglet serves chocolate confectionery with the words ‘Für Mama’. In von Wulffen’s youth and family scenes, house music or reading is often performed – and satirized as a means of domestic conditioning. In addition to a fairytale transformation of her close relatives, Musische Mutter also is a beautifully rough adaptation of Jan Vermeer’s Young Woman with a Lute (1664). There are reasons for the painterly coarseness: Von Wulffen did not use the original motif for inspiration, but deliberately chose ‘a very poorly and carelessly painted hobby picture’. Children can also be seen there, but they do not stem from Vermeer but rather from a painting by Goya. In a painterly way, the artist here quickly transforms the children into pigs and moves them into a crude, rustic environment.” (1)
The supposed animality of the woman seems to correspond to the humanity of the pig, also an antique metaphor for unbridled passion and diabolical lust, branded as transgression and sin.

“In Die Tochter des Jägers (2020), von Wulffen throws a loden cape over herself like Rumpelstiltskin. (…)
In her pictures, the artist wanders between the worlds. The cape seems to belong to an old white man who probably doesn’t need it anymore. He’s dead, or at least sound asleep, in his bed. And also the wooden chamber in central perspective, with a view of a mountain range, which could be both, a window and a landscape painting, is the man’s room. Loden, farmhouse parlor, and mountain panorama are synonymous with the German- bourgeois legacy of “brown“ painting and handicrafts, is what von Wulffen takes up here. She stands in the center of the composition with a fixed gaze, filling the space and format. Because of their specific shape of the self- portrait, she decomposes this legacy as a motif and as an artistic practice.” (2)

“Von Wulffen’s transcendental-poetic approach can therefore neither be pigeonholed as an ethno-political origin legend nor as a fantasy of the future, in the sense of an opening or subjective liberation into the infinite. Rather it becomes an intersubjective conspiracy, in which the sheer infinity of painterly interactions becomes a condition of possibility of a variety of finite determinations of a subjective, familial, cultural and social nature. These determinations do not merely act as incisions into the horizon of the possible; as a limit and negation, they open up a space of experience. In it, viewers are less affected by their own possibilities than they are by the necessity of acting, of mobilising themselves within their own negativity. The possibility of such a mobilisation corresponds in turn to the impossibility of entirely escaping history.” (3)