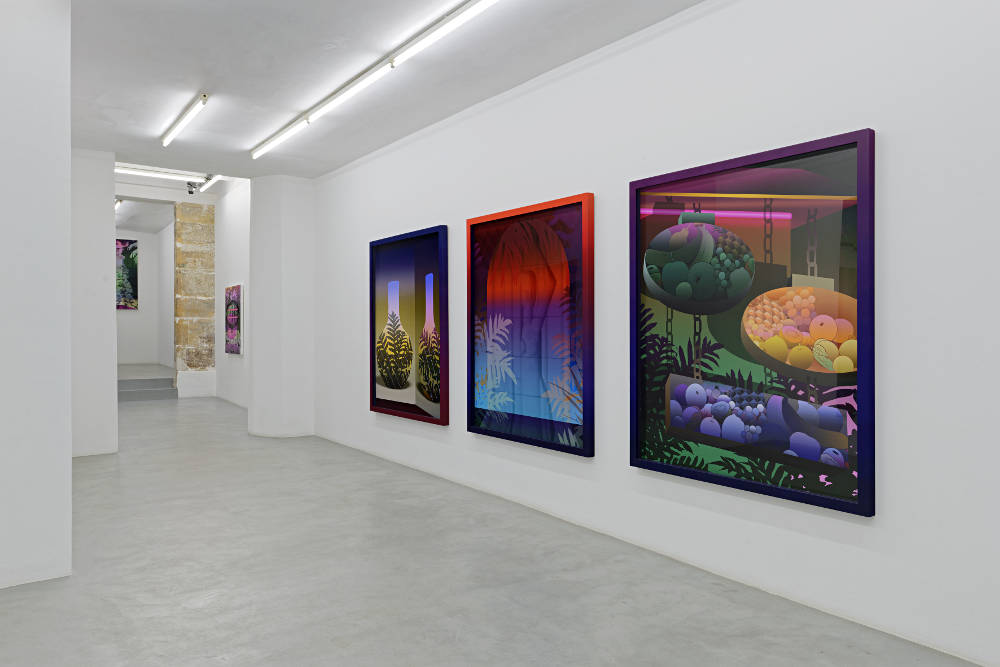 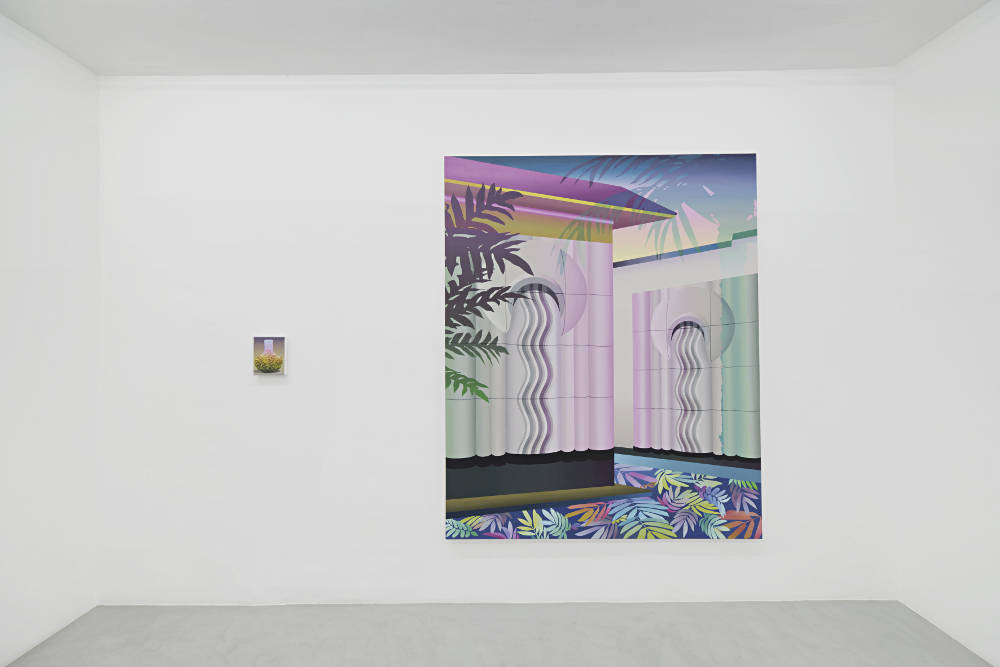 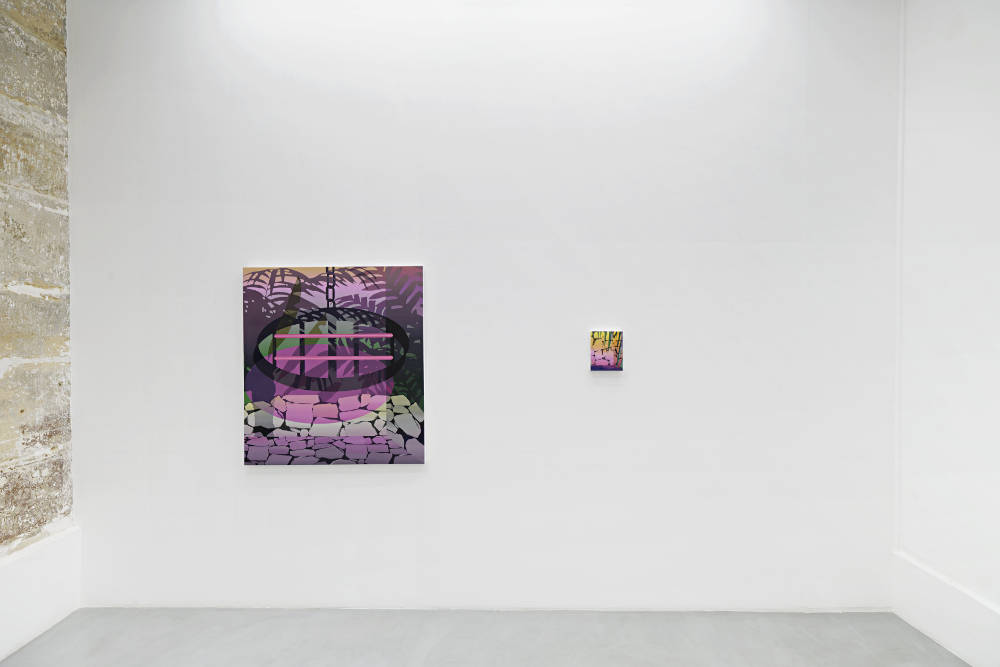 I adore flat painting. In a similar way to certain plants, it radiates soothing, exciting, disturbing and refreshing qualities. I find it haunting. Amélie Bertrand’s painting incontestably belongs to this category, more contradictory than it often at first seems. The satiny uniformity of the oils lends a decorative aesthetic: hence the soothing aspect as the depicted world is rendered without depth, and the sense of excitement due to “cheerful” themes and colors. Yet this surface painting would seem too simple if it only served to clinically expose its system of contrasts.

Indeed the improbable character of the scenes represented shifts the whole into an ironic and surreal universe. Amélie Bertrand’s paintings do not depict real places but décors, whose very nature is problematic: one can make out particular elements (plants, pools, fencing etc.) but their texture and particularly their composition is totally artificial. That these paintings originate from computer-produced images does not give the slightest hint of an oeuvre craftily based on the passage from one screen to another, from the Web to the canvas. These paintings in a way intimate software produced images reclaimed through painting. The world of computing is that of the fingers; the world of painting that of the hands, and Amélie Bertrand’s mind insinuates itself between the two.

Yet formally it is the composition of the paintings that lends them their own peculiar atmosphere, with their neutral and seemingly out of place luxuriance. What is this oversized ladder doing, leaning against a green structure alongside a wall of grey stones (Sans Titre 2012) ? And this skateboard run, devoured by leaves and surrounded by tiles (Floorshow, 2018) ? Where did she find this odd-looking temple decorated with pseudo-fountains (Waterfall, 2018) ? Amélie Bertrand transports us to unpredictable corners of the universe that are saturated in a dreamlike way and entangled like some kind of nightmare. Where exactly are we? In a pilot store? A virtual design catalog? A prototype hotel lobby? A Mexican website? Troubling aspects in the composition hold sway over the pictorial space: In each of the paintings, the perfectly depicted elements don’t seem to fit together. They clash with each other as if an experimental decorator had assembled in the same space, whether inside or out, parts of different rooms originating from a variety of worlds. Amélie Bertrand’s paintings are thus both homogenous and heterogeneous, perfect yet off balance. The décors produced do not follow the dictates of taste and the elements proliferate and emancipate themselves. They are like fake scenes; yet who would want to design fake scenes? We know that in the world of decoration, the various elements must enter into harmony in order to form a coherent whole but Amélie Bertrand’s canvases thwart this coherence by proposing more and more strange and exuberant arrangements.

In times gone by, in the world of show business there was a profession, which went under the charming name of set dresser (a profession often exercised by women). A set dresser’s work consisted of bringing together the various elements on stage for a play in order to ensure the visual harmony of a performance. Amélie Bertrand is an iconoclastic set dresser. Her painting, while perfectly executed, discredits reality, becoming more and more radical as the years go by. The disparity between a careful and seemingly “easy” methodology and the assembly of discordant elements leaves an impression of sour unease. These décors from which all human figures are banished, were designed neither by nor for people. The play is performed on its own, without actors, without drama, with nothing… Amélie Bertrand’s seemingly cool style conceals traps (a 2014 canvas is entitled Trap). Shadows proliferate, plants spread and chains rattle. The spectator is superfluous. In these spaces no one can hear you scream.