“Each new day, science provokes us to readjust and adapt to a new view of our environment. Penetration into the microcosmic and the macrocosmic reality unquestionably brings into being heroic generalizations which affect our lives to the minutest detail.” [1] —Claire Falkenstein

Michael Rosenfeld Gallery presents Alternative Worlds, a group exhibition featuring five artists whose practices center repetitive mark-making, a deep interest in the intricacies of the natural world, and the poetic rhythm inherent to the act of artistic creation. Musing on our understanding of the earth, its place in the universe, and our own humanity, Mary Bauermeister (b.1934), Lee Bontecou (b.1931), Claire Falkenstein (1908-1997), Yayoi Kusama (b.1929), and Alma Thomas (1891-1978) each cultivated bodies of work whose central themes and technical approaches mirror each other in unexpected ways. 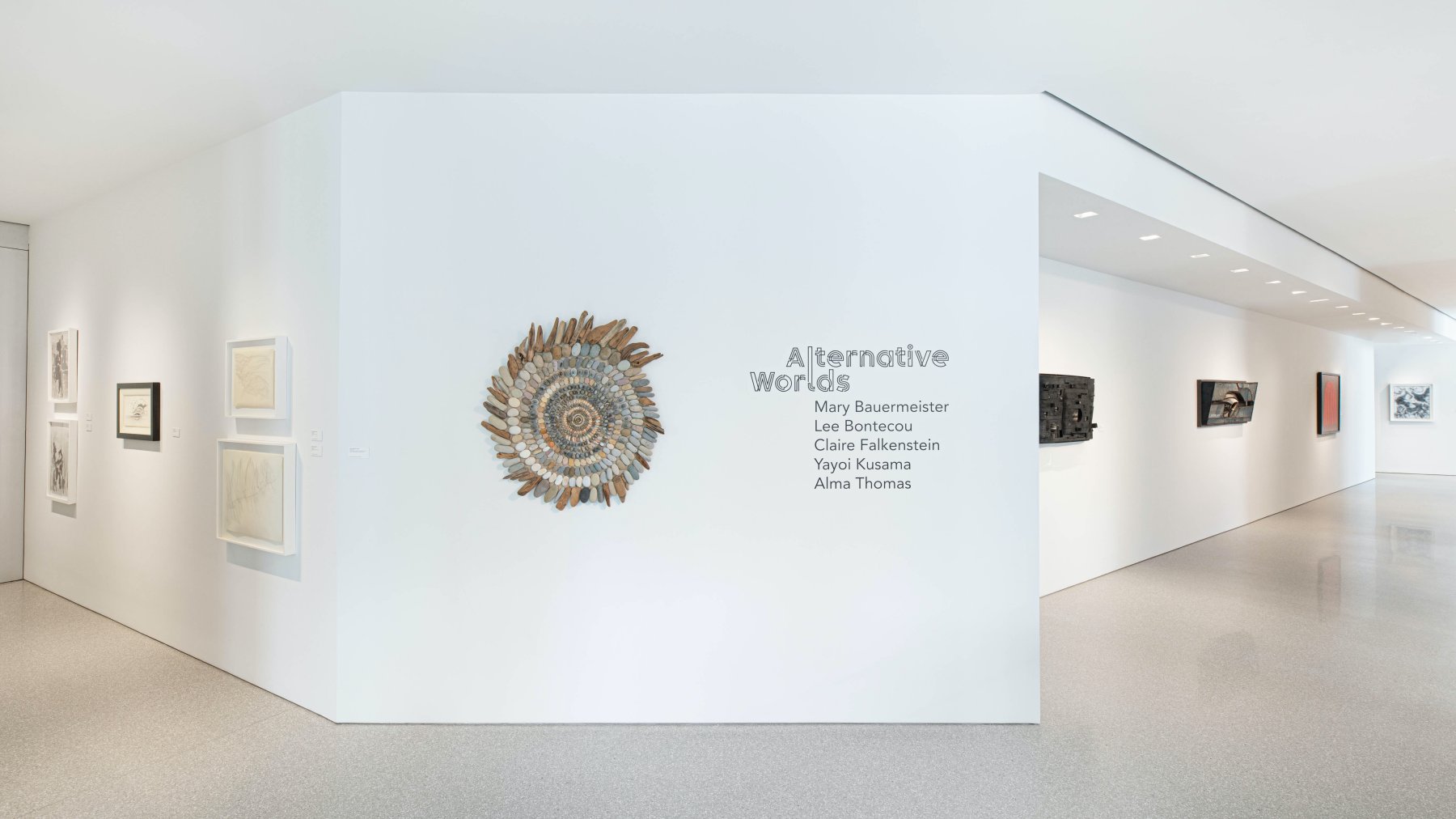 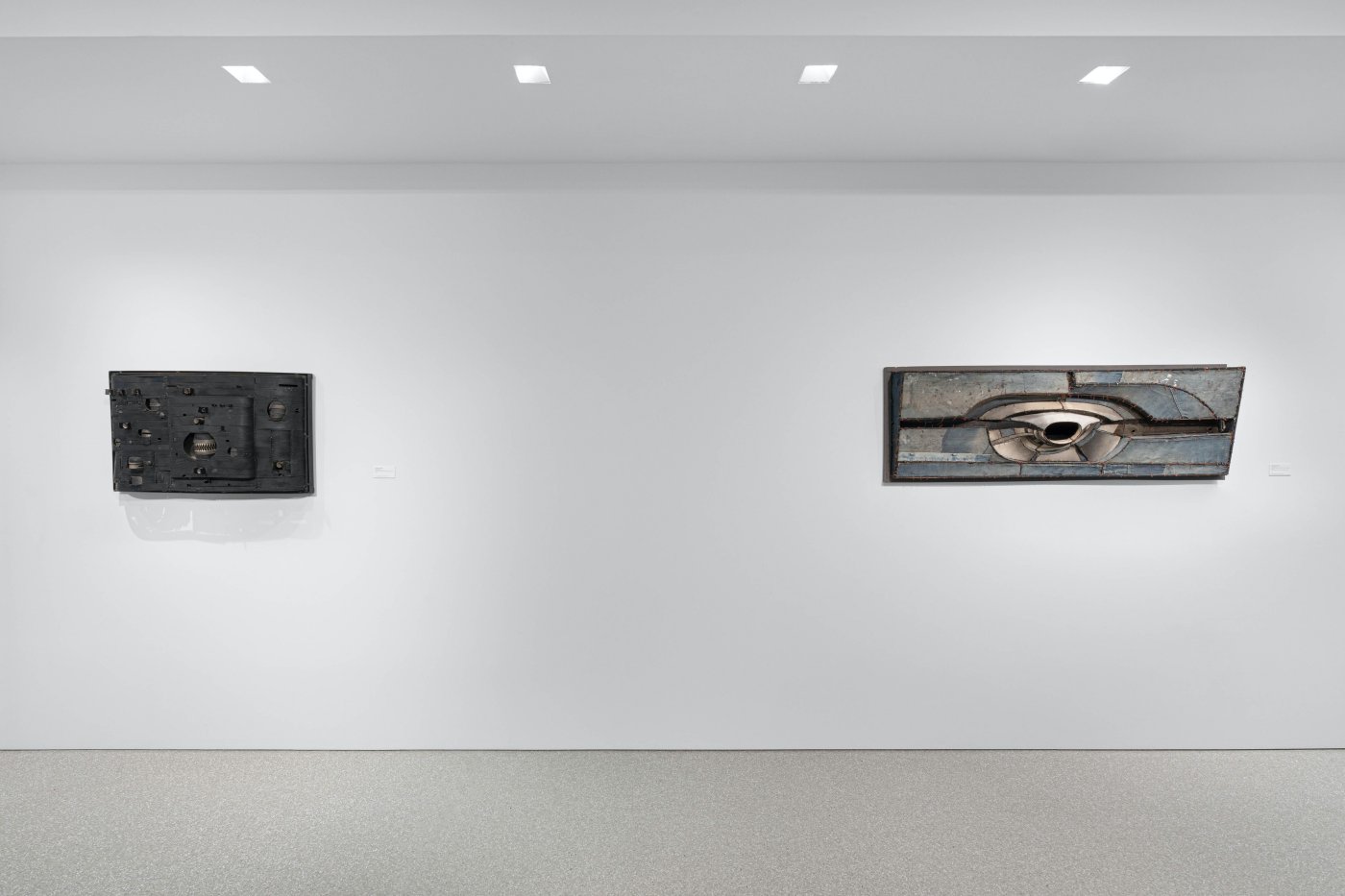 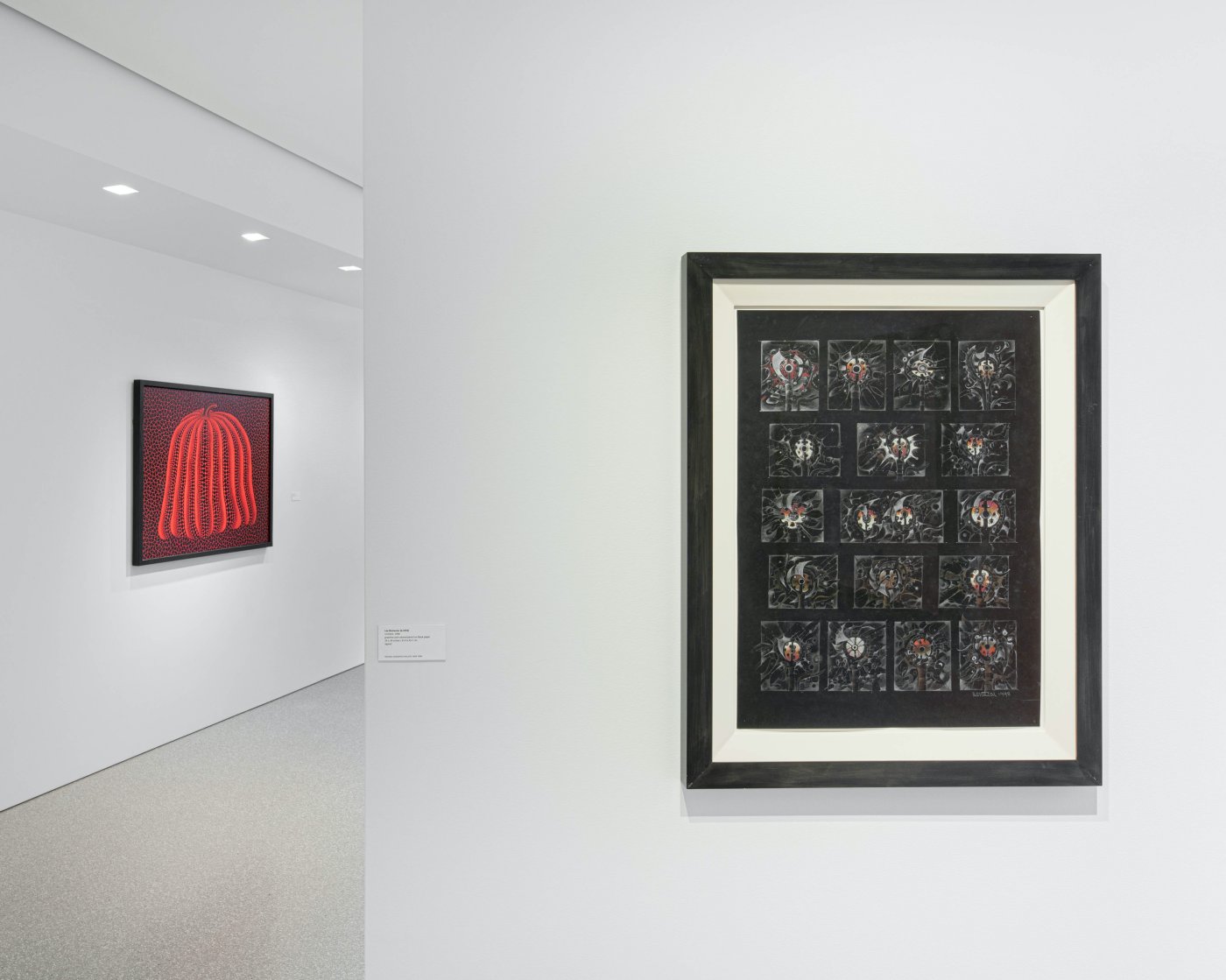 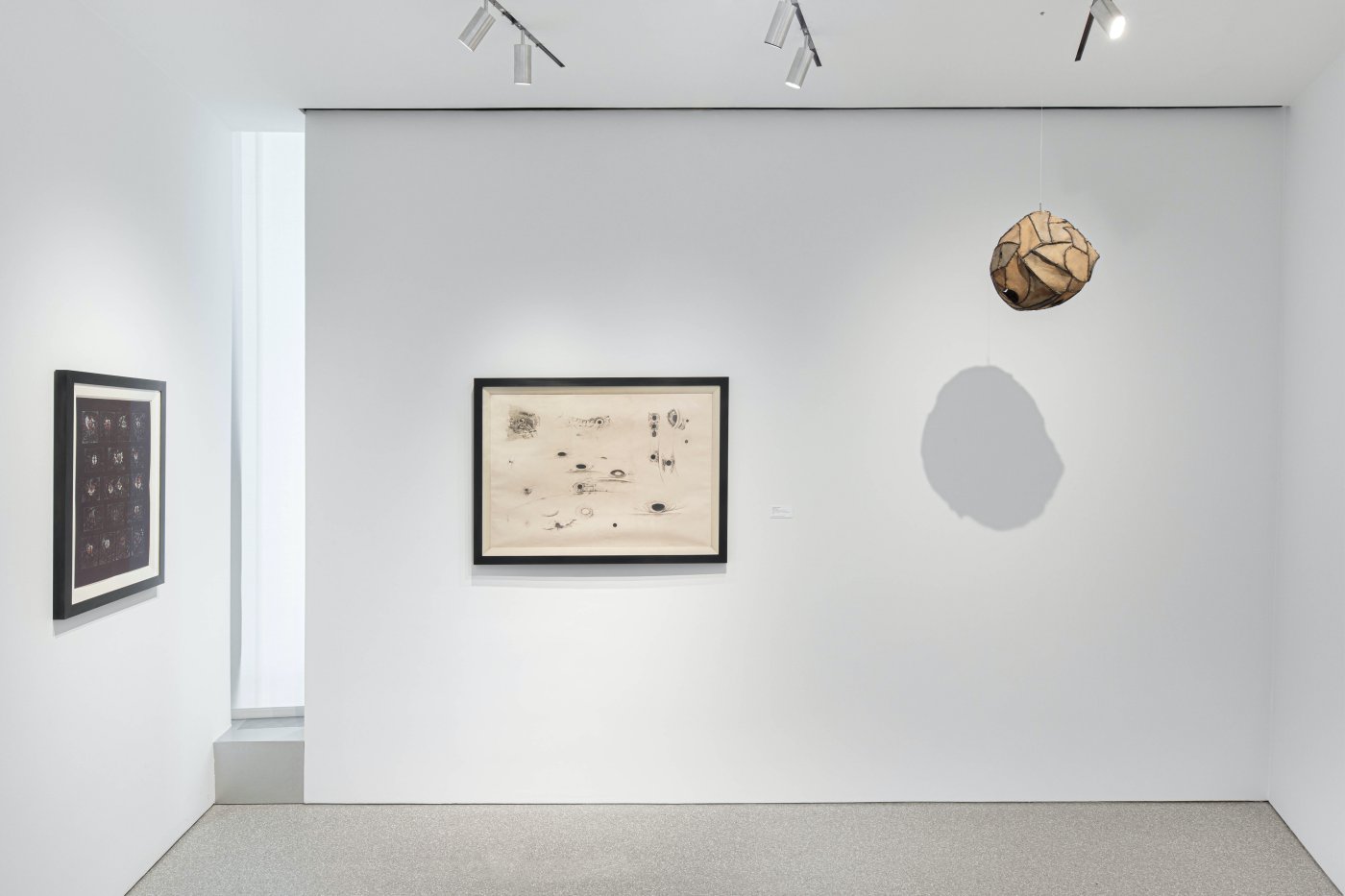 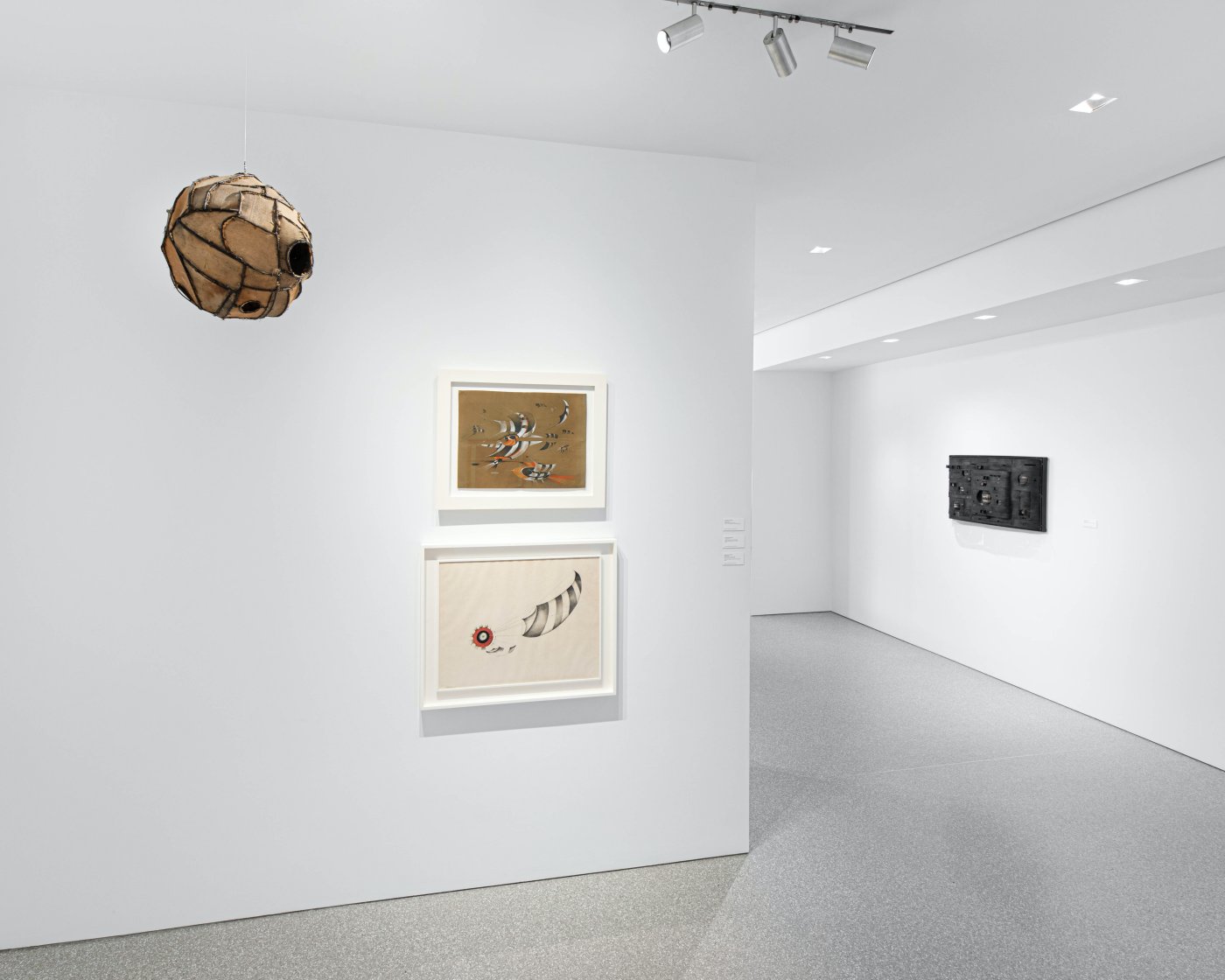 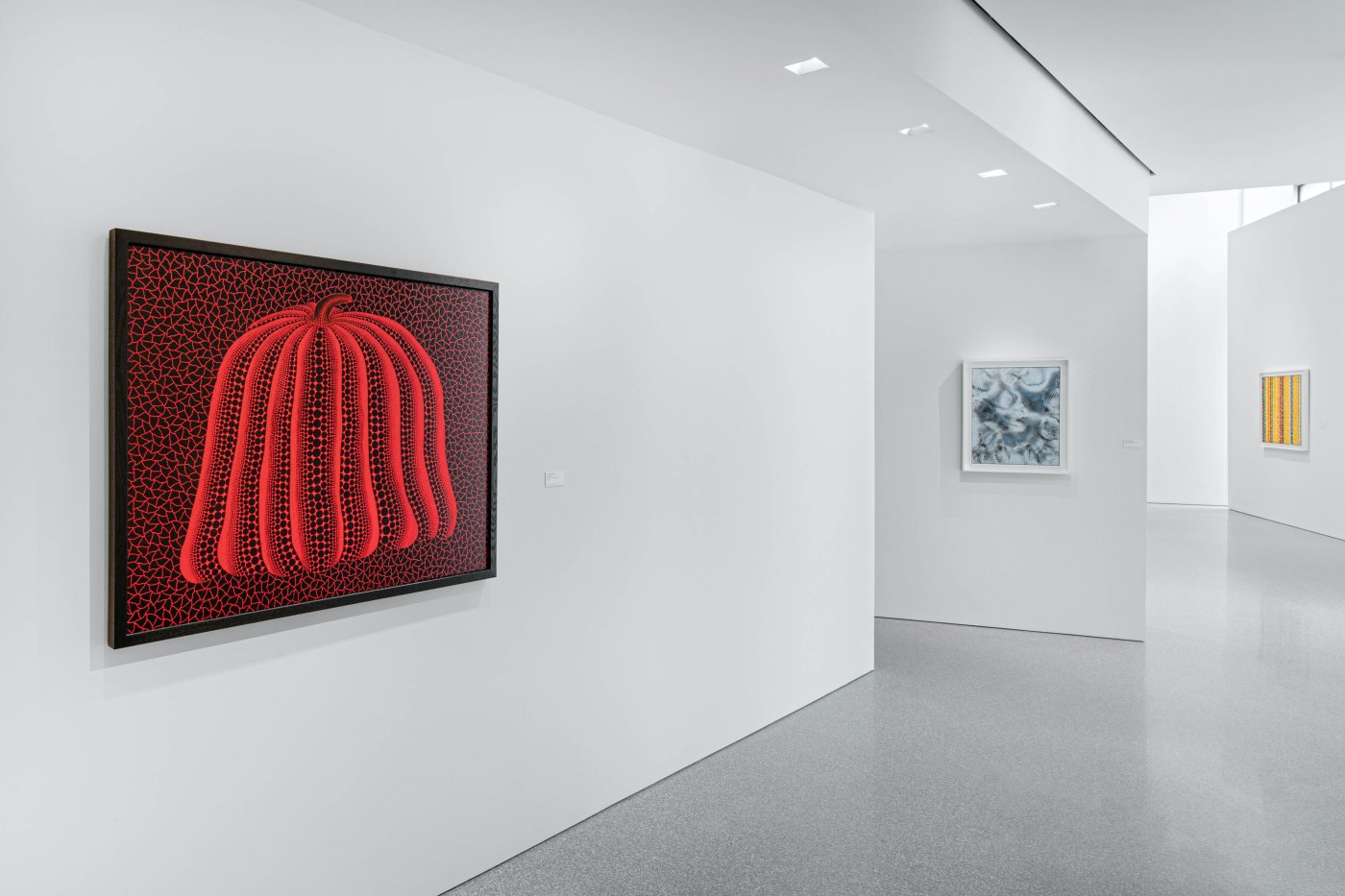 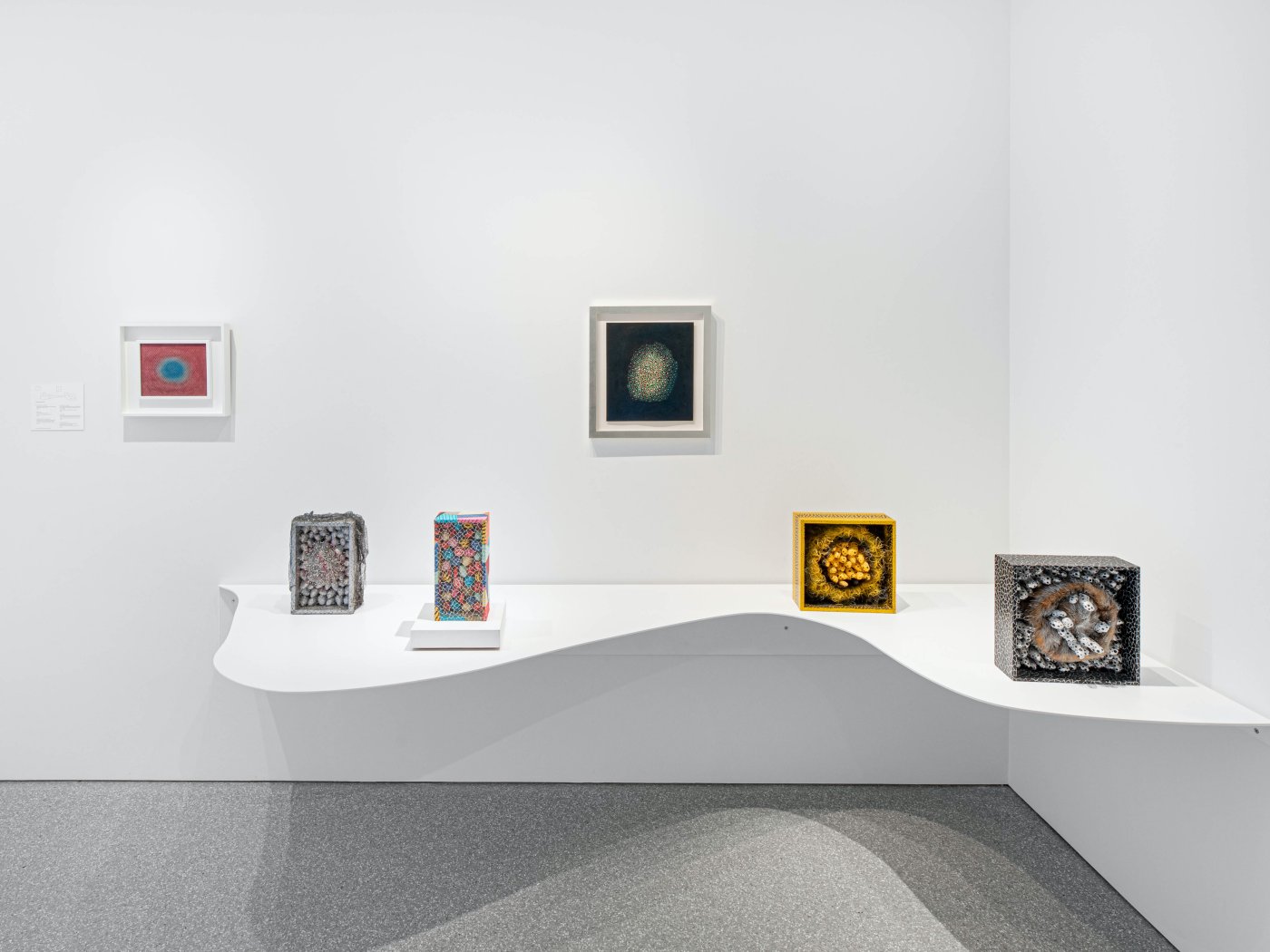 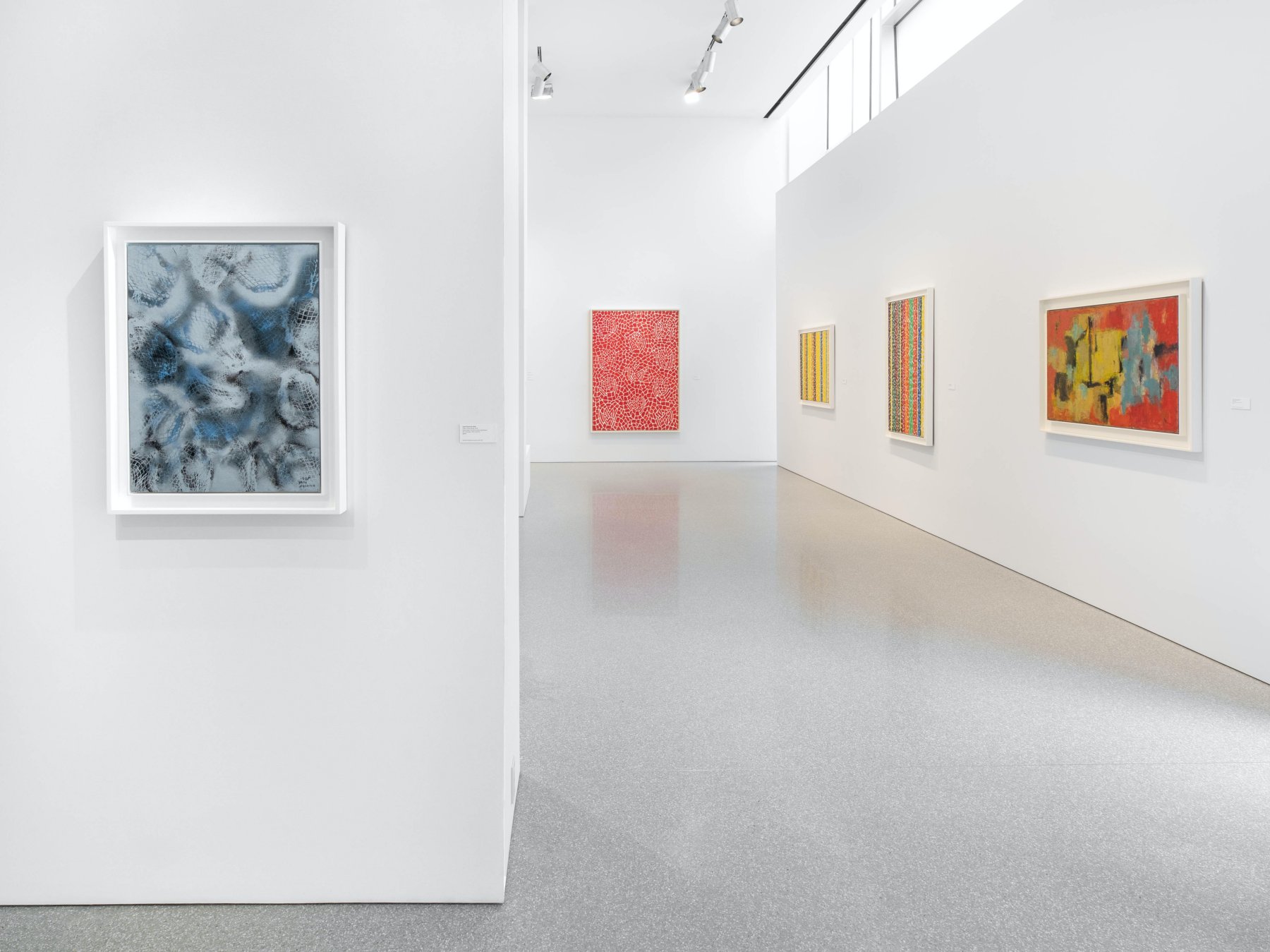 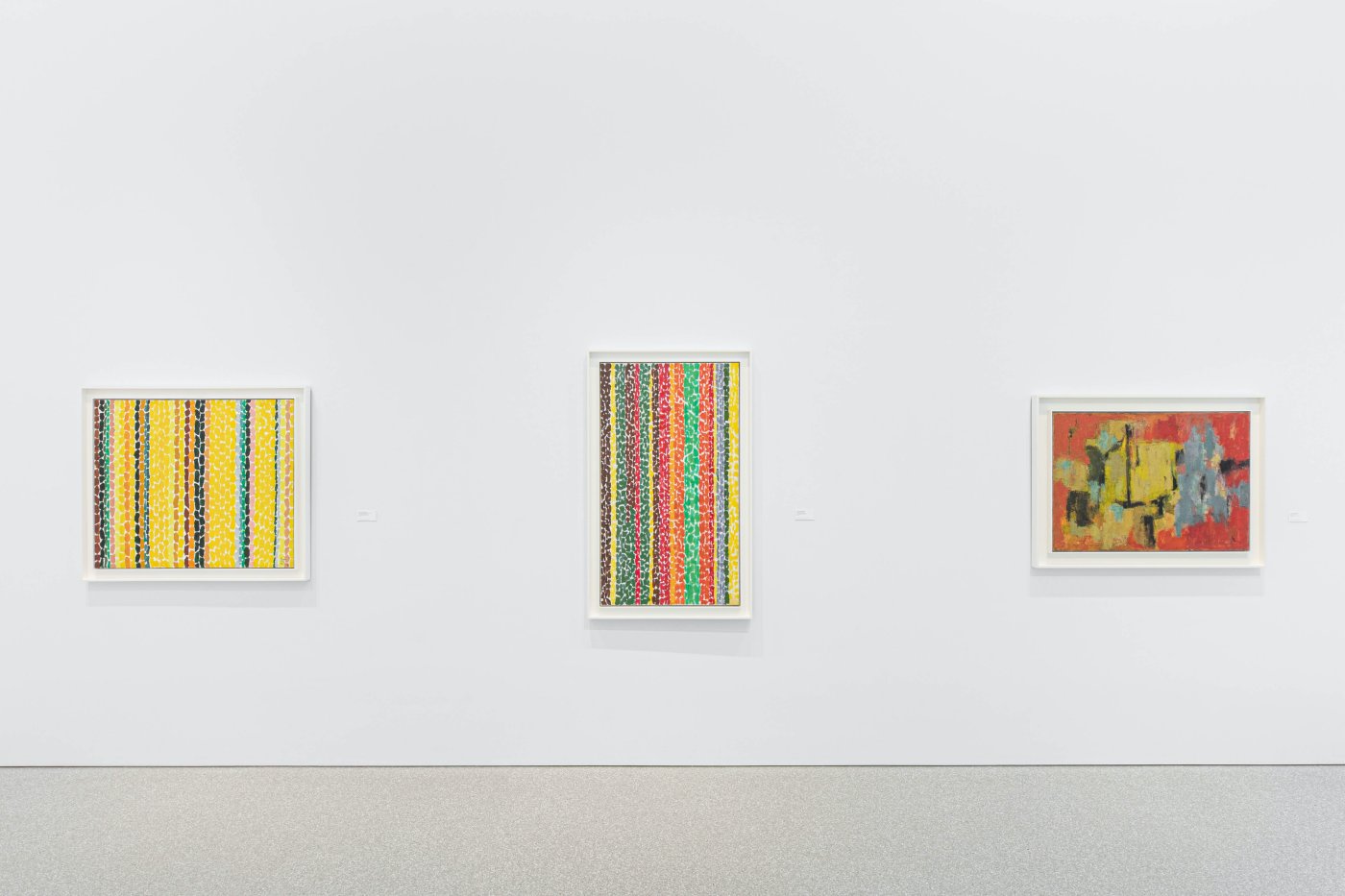 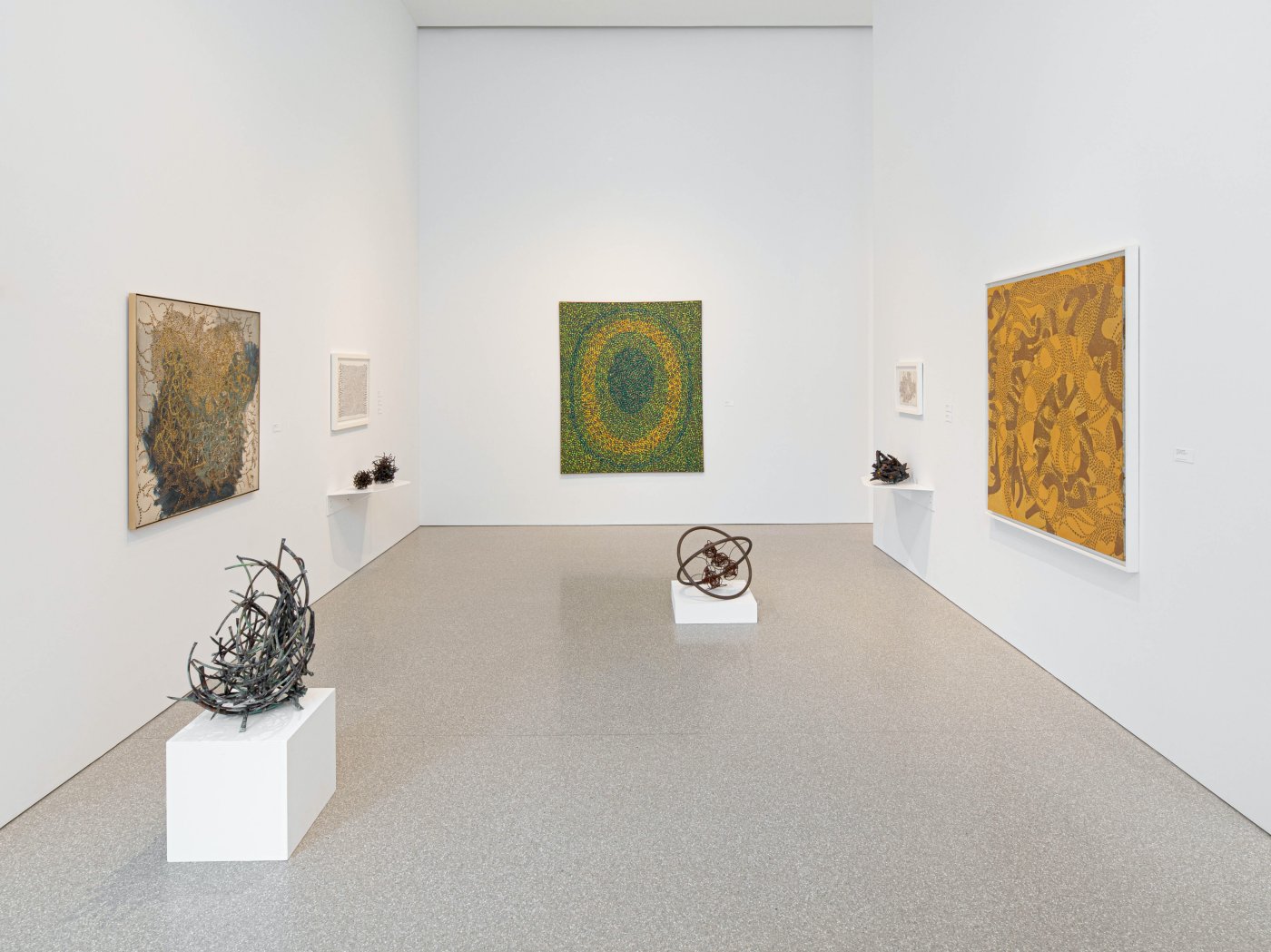 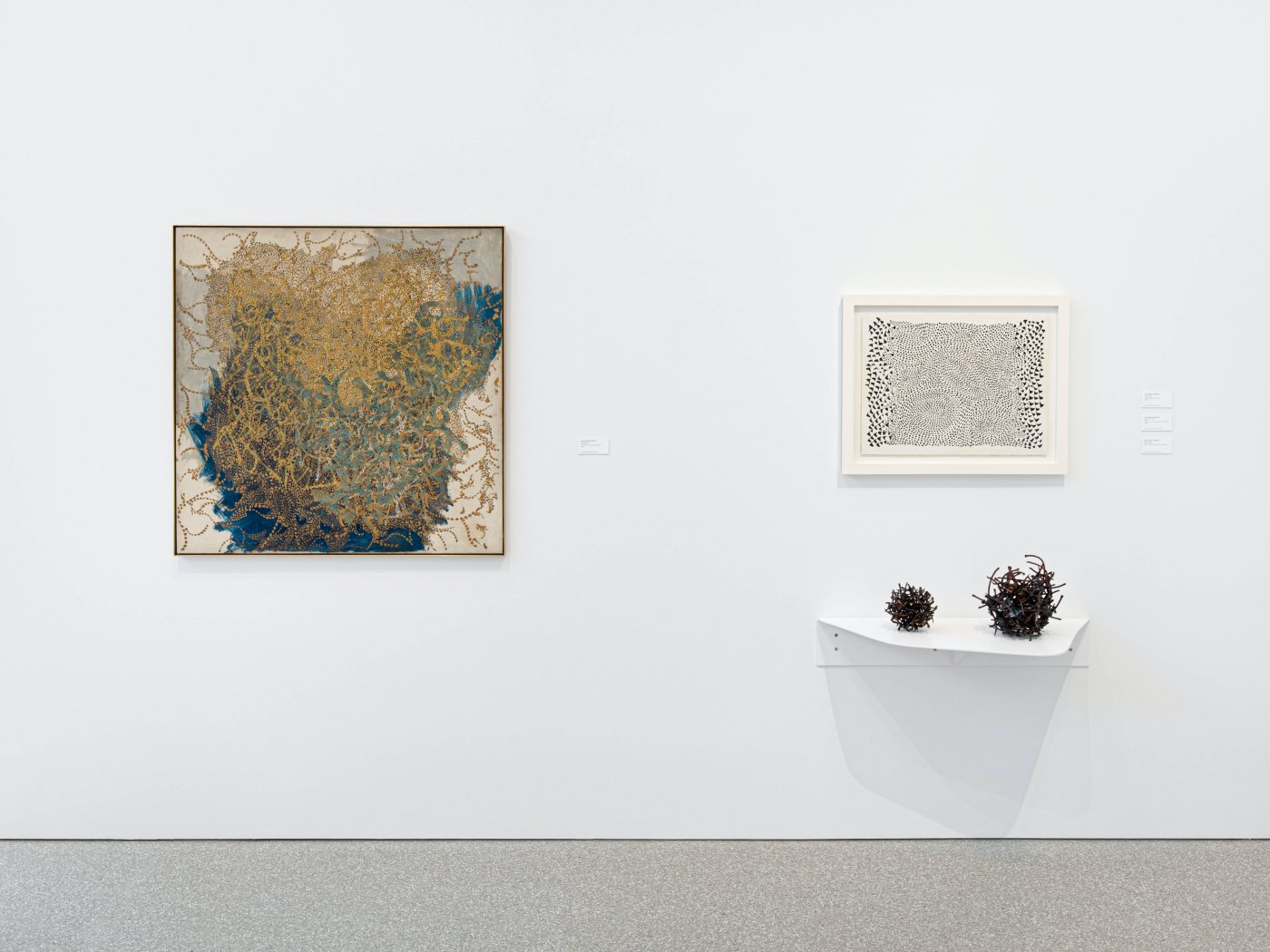 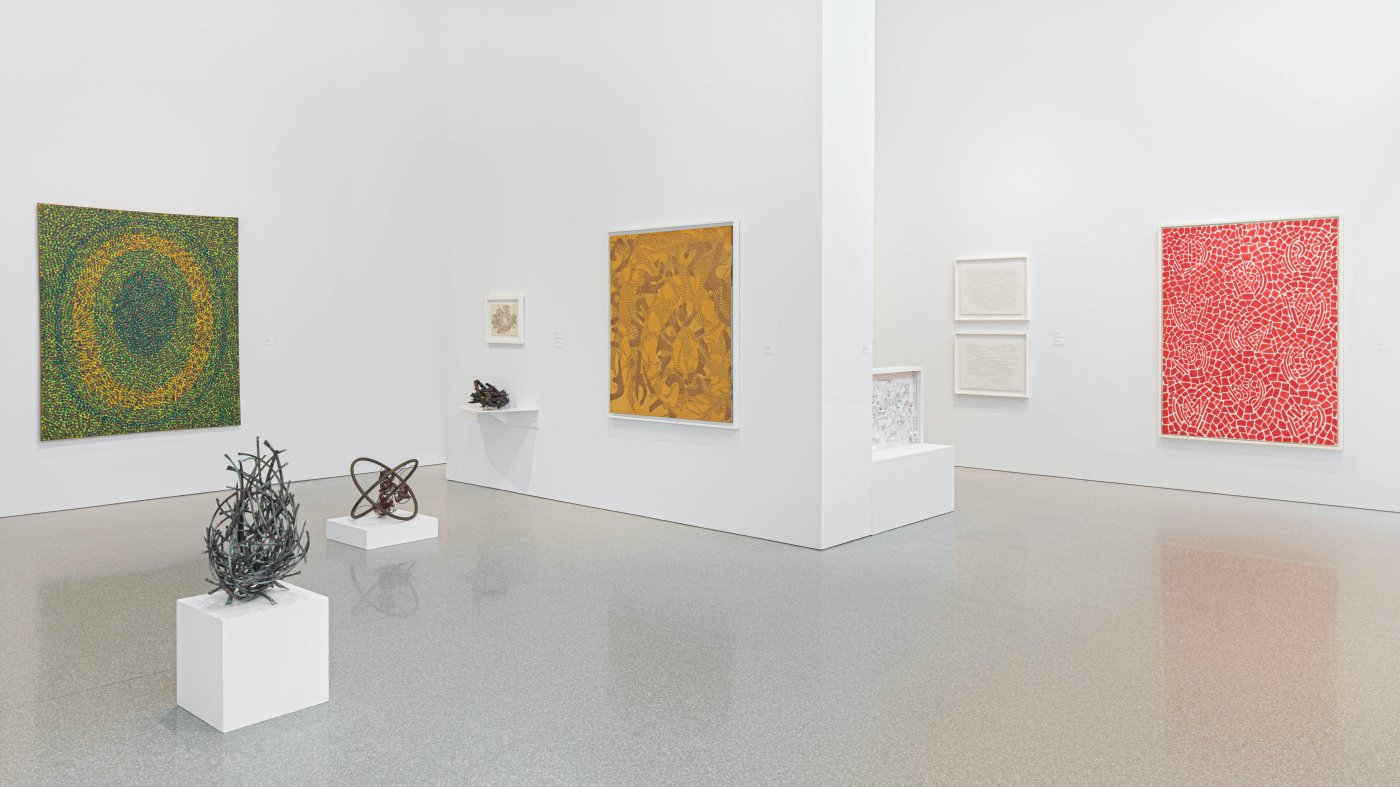 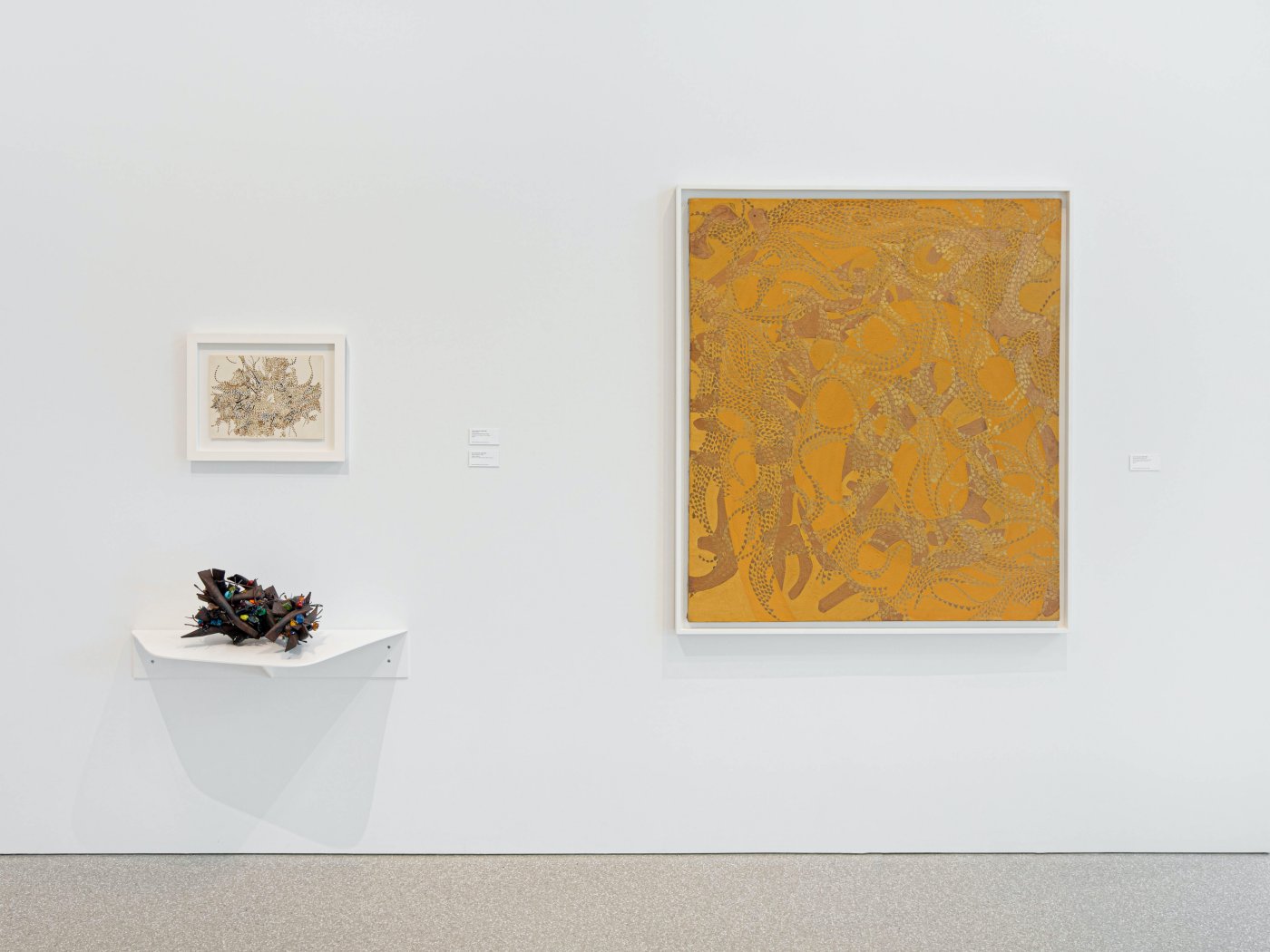 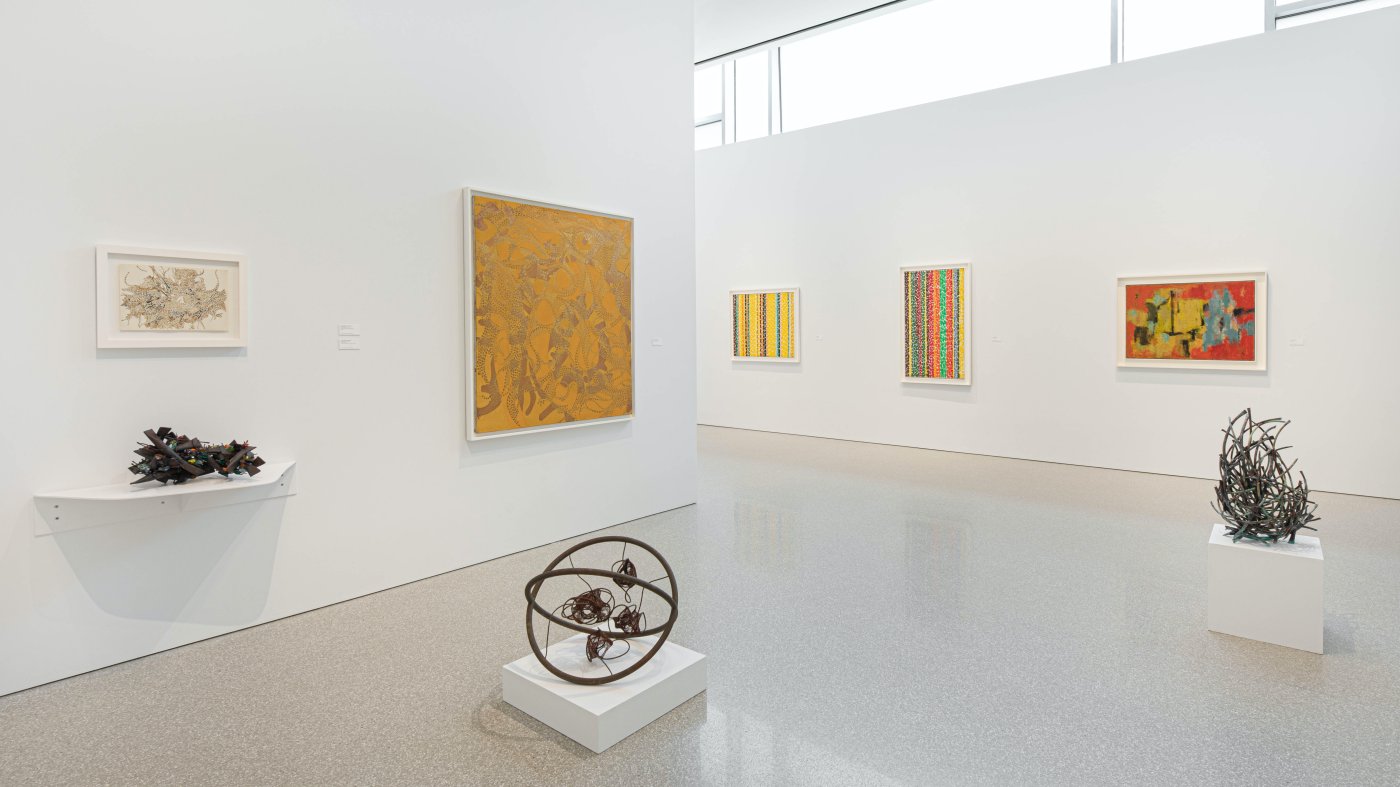 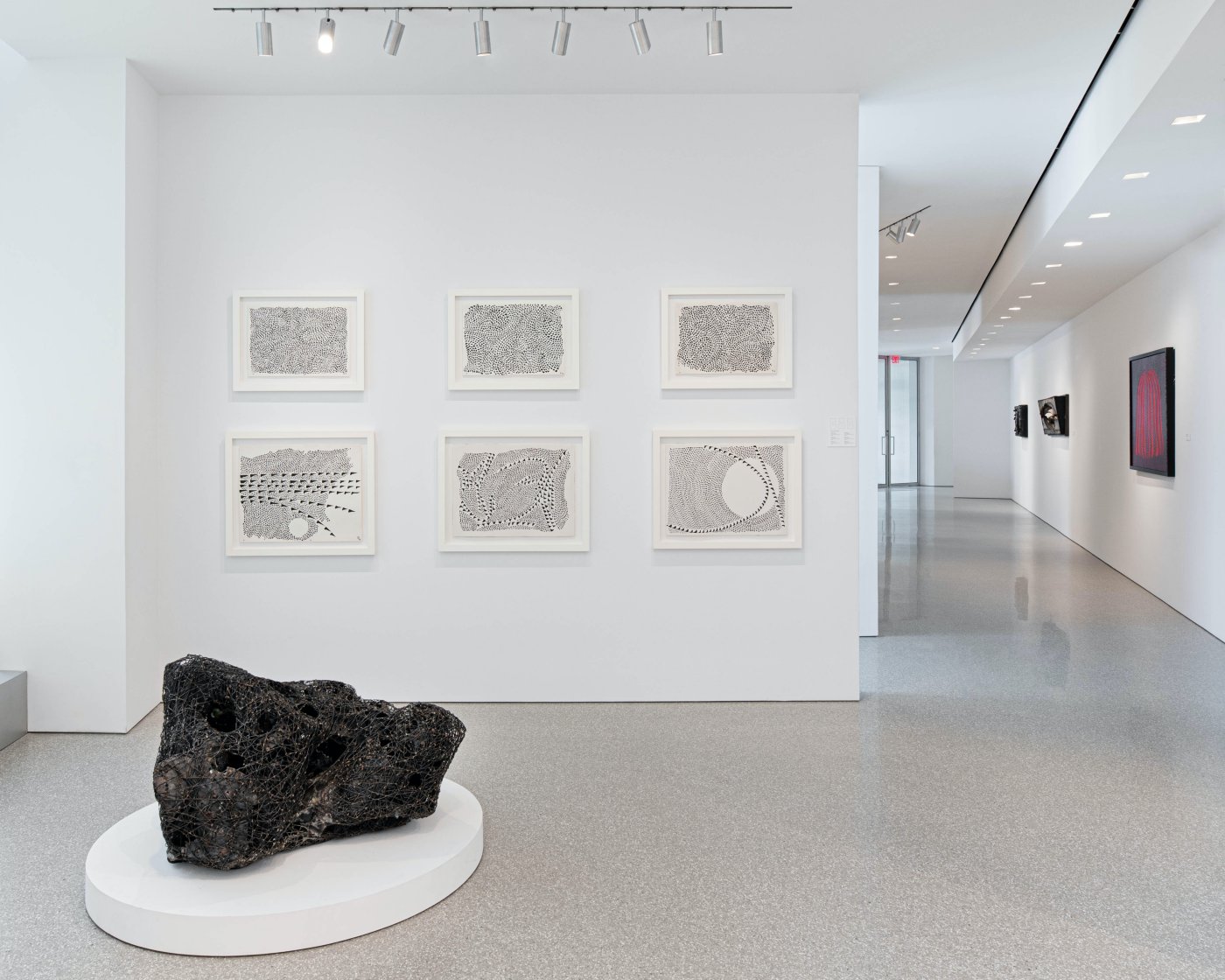 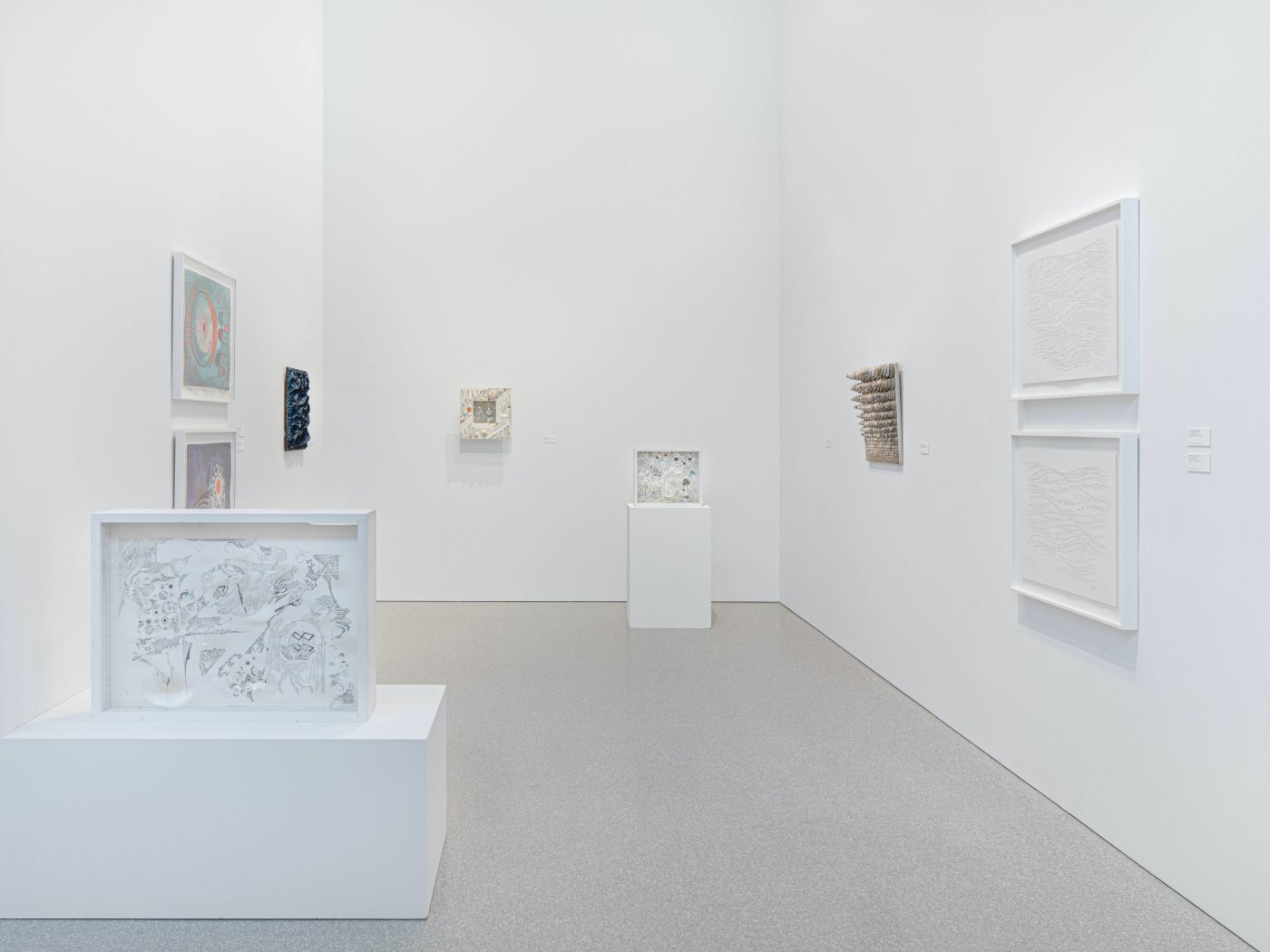 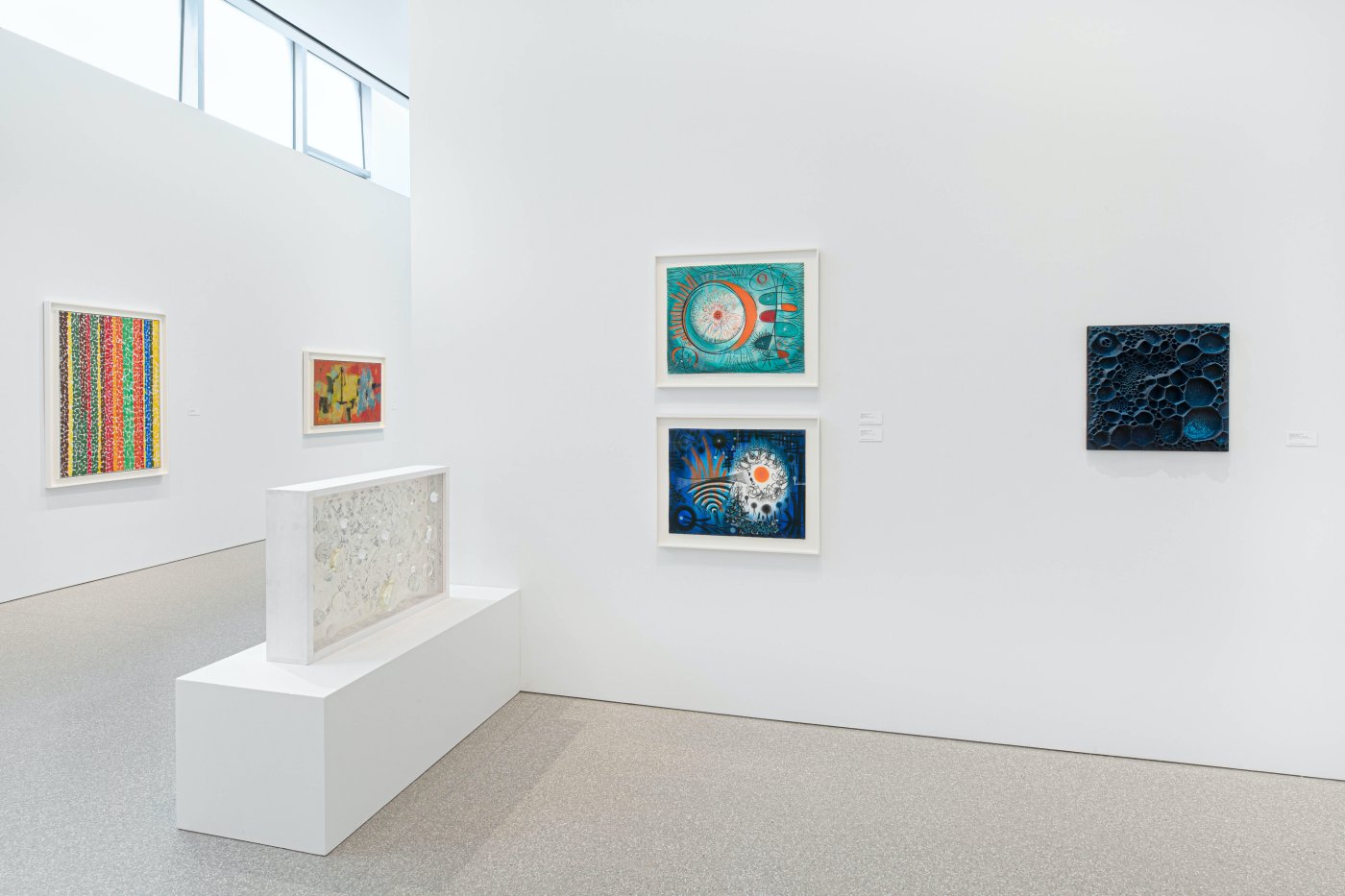 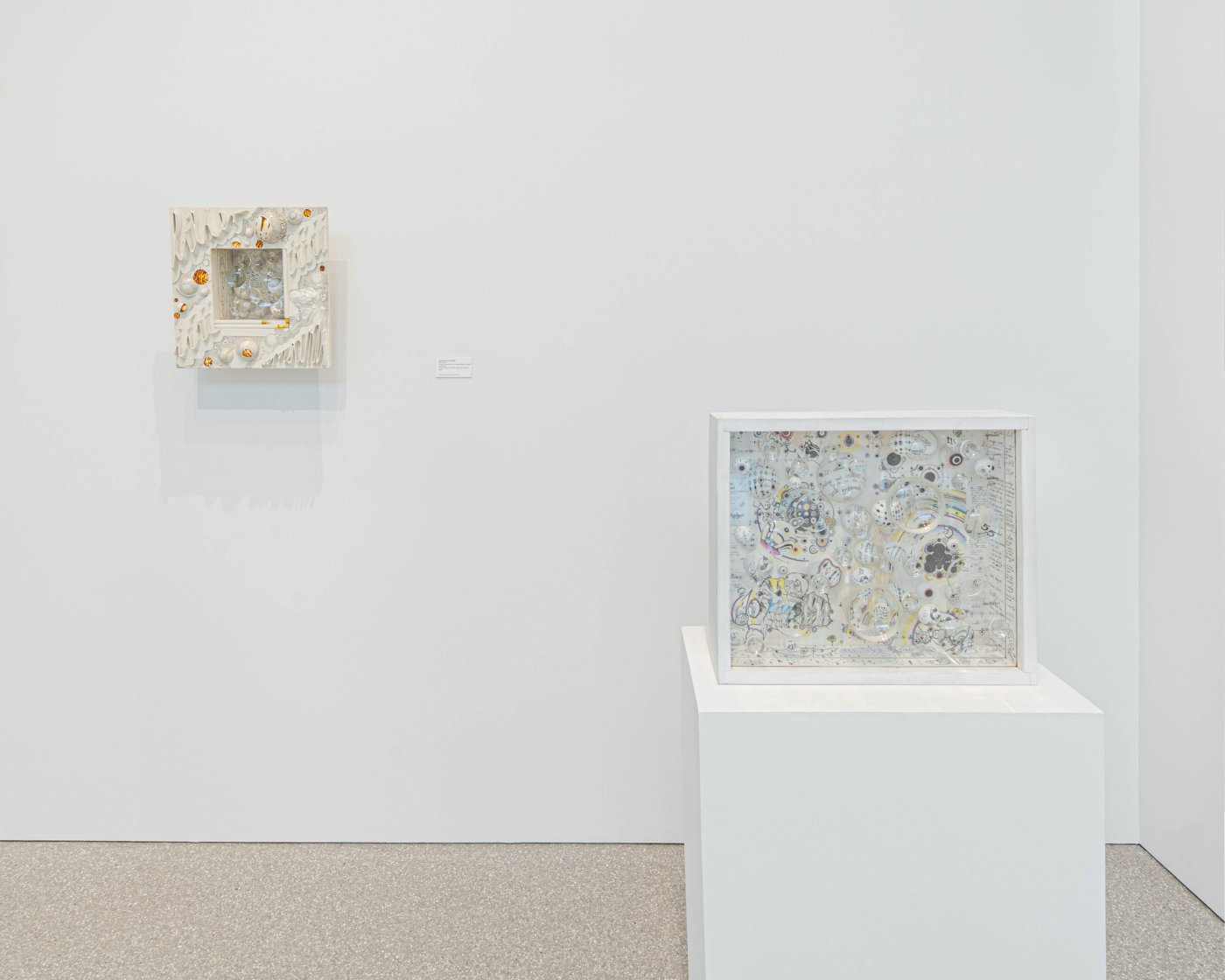 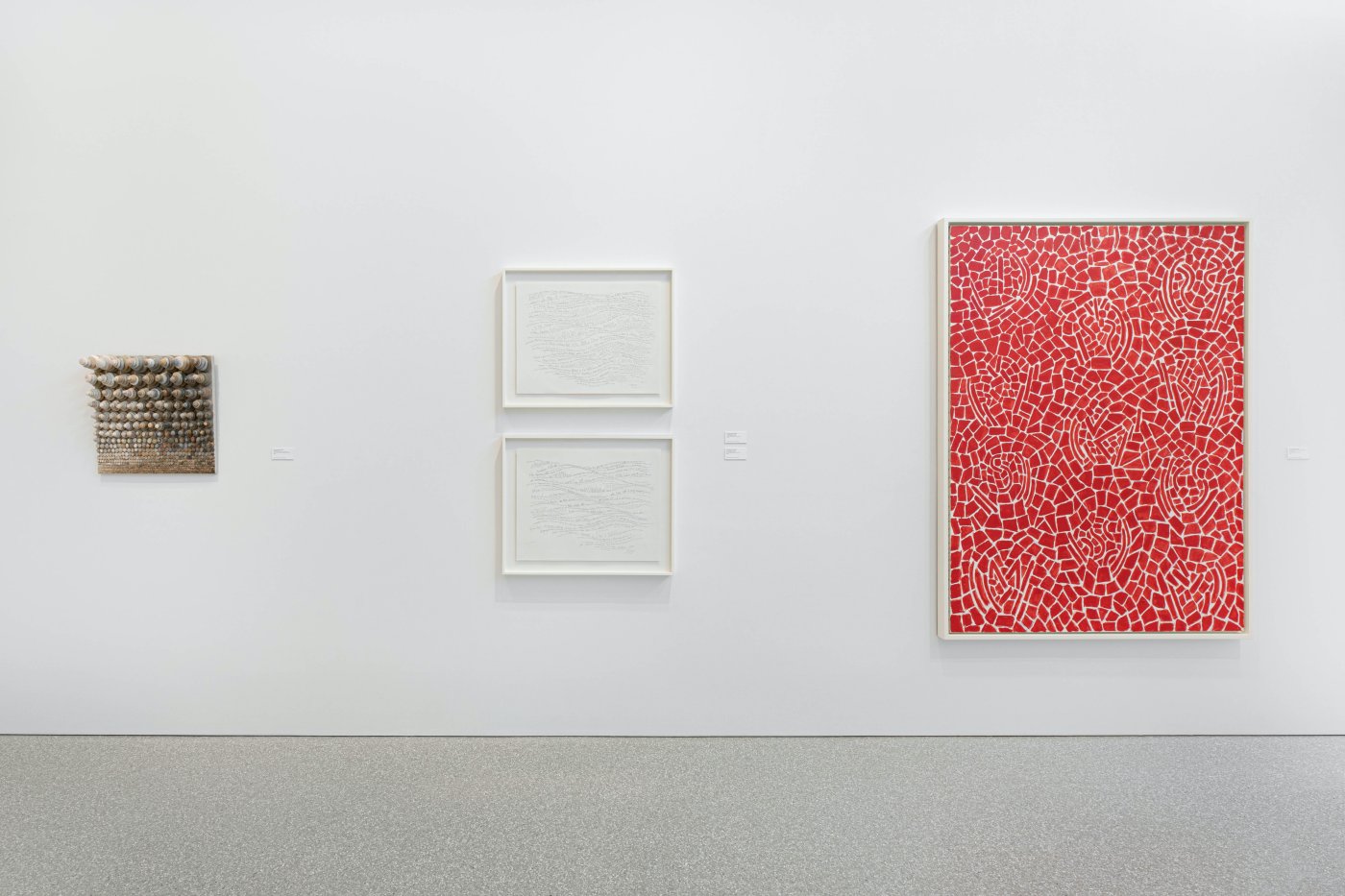 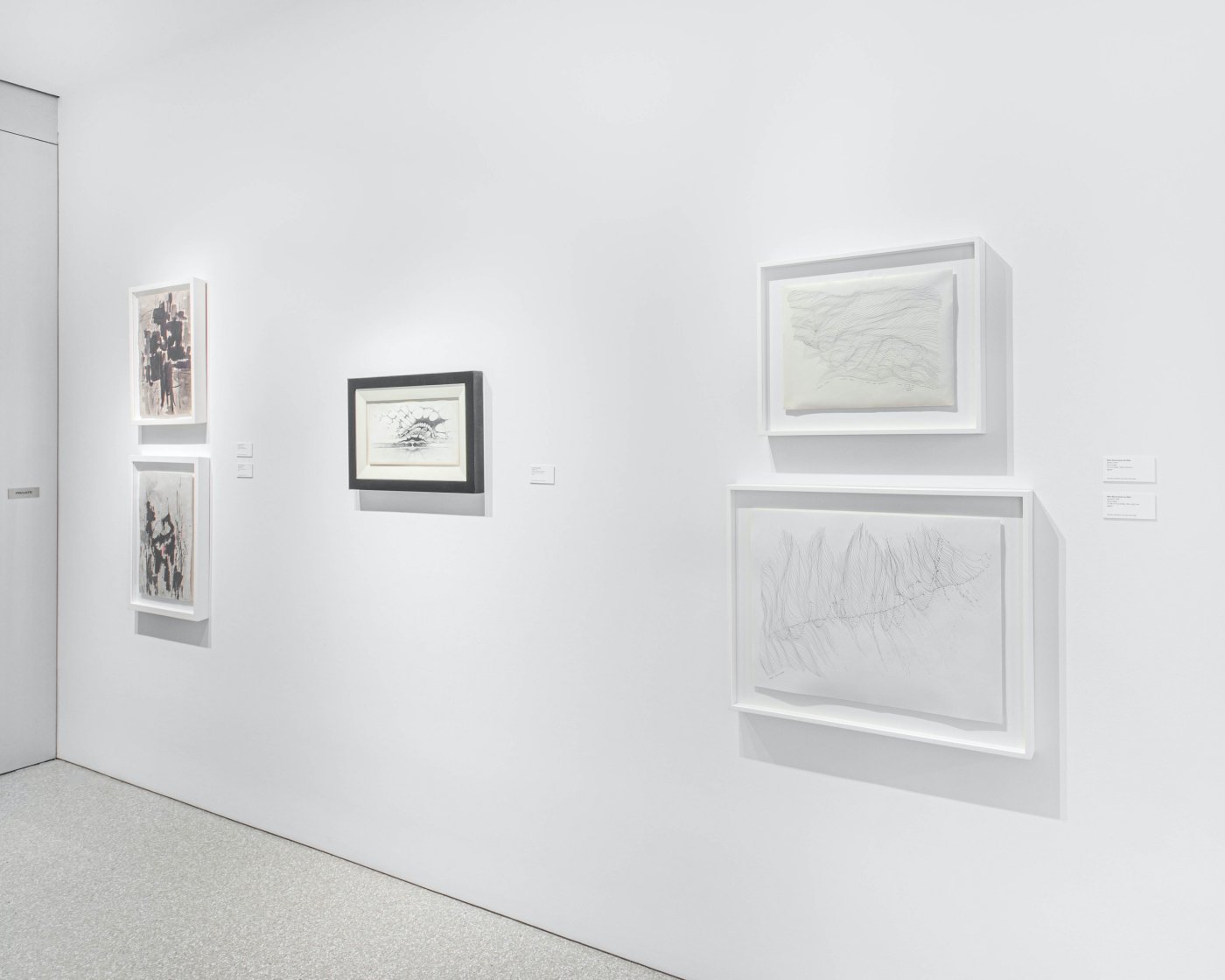 Though each artist forged their own unique artistic voice with largely disparate styles and materials, common thematic undercurrents pervade: advancements in scientific understandings of the universe and biological life, evolving social justice issues resulting from the major political developments of the time, a preoccupation with the visual effects of repetition and formal rhythm, and an insistence on interpretive subjectivism. Spanning the second half of the twentieth century through the present—beginning with a Kusama net drawing dating to 1953 and ending with a text-based Bauermeister work created in 2019—Alternative Worlds converges a multitude of perceptual possibilities at once aggregate and open-ended.

“Worldscapes” is a term Lee Bontecou coined in the early 1960s to describe the variegated forms she perceived in the matte black swathes of soot that became an important compositional feature of her artworks. Though the term belongs to Bontecou, it is an apt descriptor for all works on view in Alternative Worlds, as each artist sought to convey a unique, imagined field of vision formally or conceptually grounded in the stylistic language each developed throughout her career. While Bontecou is most known for her innovative abstract wall relief assemblages featuring a central void, the selection on view emphasizes the artist’s career-spanning interest in environmentalism and social justice: a series of drawings featuring sharp-edged botanical subjects coalesce into scenes of ecological disaster and a group of works featuring horizontal stripes and bandsaw blades resembling gritted teeth evoke themes of imprisonment and despair (Bontecou’s Greenwich Village studio was a few blocks from a women’s prison).

Themes of institutionalization and containment are likewise apparent in the works of Yayoi Kusama, whose skeins of biomorphic forms simultaneously appear hemmed in and endless. Repetitive patterns of nets, dots, and cellular forms define the artist’s allover aesthetic, an impulse she has harnessed as both an artistic practice and a therapeutic approach to alleviating symptoms of her atypical psychology. Kusama’s ongoing desire to convey an infinitesimally detailed yet vision-encompassing experience is manifested in the works on view in Alternative Worlds, where the evolution of her obsessive patterning prompts the viewer to delve into the realm of the artist’s endless imagination.

A similar engagement with nature is apparent in the work of Alma Thomas, whose scintillating abstract paintings embody the artist’s appreciation for the interplay of botanical hues and organic patterns observable in the verdant flora of Washington, D.C., where she lived for most of her adult life. In her iconic work from the 1960s, rhythmic daubs of color arranged in vertical stripes are often set against a painted ground. These vibrant compositions consist of small strokes of paint, applied like musical staccato notes to manifest an improvisational, jazz-like rhythm. Thomas executed numerous paintings inspired by rays of sunshine illuminating and passing through leaves and blossoms. “Color is life,” she once stated. “Light is the mother of color. Light reveals to us the spirit and living soul of the world through colors.”

The effects of light and its refraction were also a key source of inspiration for Mary Bauermeister, whose lens boxes serve as receptacles for the artist’s thoughts and ideas. Dubbed “the mother of Fluxus,” Bauermeister’s long and multidisciplinary career is united by an approach to art making that relies on the participation of the viewer and a predilection for found objects. Both her assemblage works and text-based drawings contain visual, linguistic and philosophical paradoxes that require an active observation, conjuring a space where the viewer is challenged to contemplate their perception of art and the world around them.

The cosmic relationship between inner and outer realms is also a prevailing concern in the works of Claire Falkenstein, whose stylistic vocabulary recursively explores the formal qualities of positive and negative spaces. Primary among the works on view are examples of the artist’s Sun and Fusion series, created in the middle decades of the 20th century, which feature structures of interlacing, calligraphic and curvilinear forms composed of welded metal and glass. The formal tropes of Falkenstein’s sculptures are reflected in a series of works on paper she referred to as her Moving Point drawings, whose compositions extend the dynamic play of forms observable in her three-dimensional works; comprising single points of varying size and proximity, each drawing was designed to evoke the impression of movement in space.

Through the careful composition of richly detailed visual fields, Bauermeister, Bontecou, Falkenstein, Kusama, and Thomas construct artworks that are simultaneously holistic and integrated within the viewer’s own physical and visual space. Although these artists worked within distinct geographic and social scenes, formal harmonies abound when viewing their work in direct juxtaposition. Yet more revelatory is the affinity of conceptual frameworks each engaged to describe the vision they wished to impart through their work. At a time when exponentially accelerating ecological change further amplifies the threat of environmental collapse, advancements in space exploration render the colonization of new worlds ever more possible, and the explosion of readily accessible digital spaces allow the previously imperceivable experiences of the disenfranchised to circulate in the public eye, the works on view in Alternative Worlds provide space to observe, dwell, and imagine visionary realms both fraught and serene.