This solo exhibition displays Alison Wilding’s work in two contrasting rooms: one a spare look at her large 2016 piece Mesmer, the next an abundant display of new wall and table pieces and drawings. 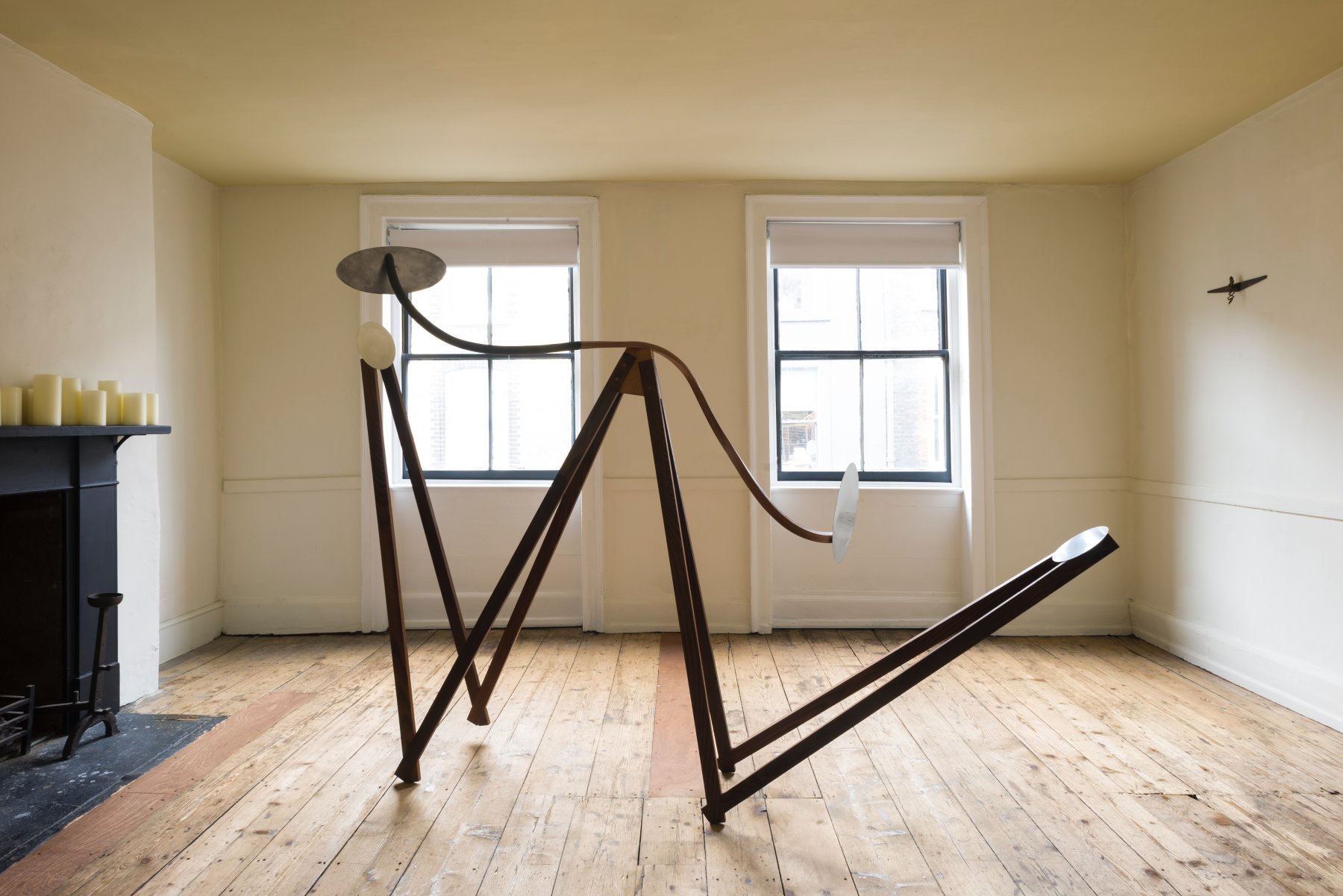 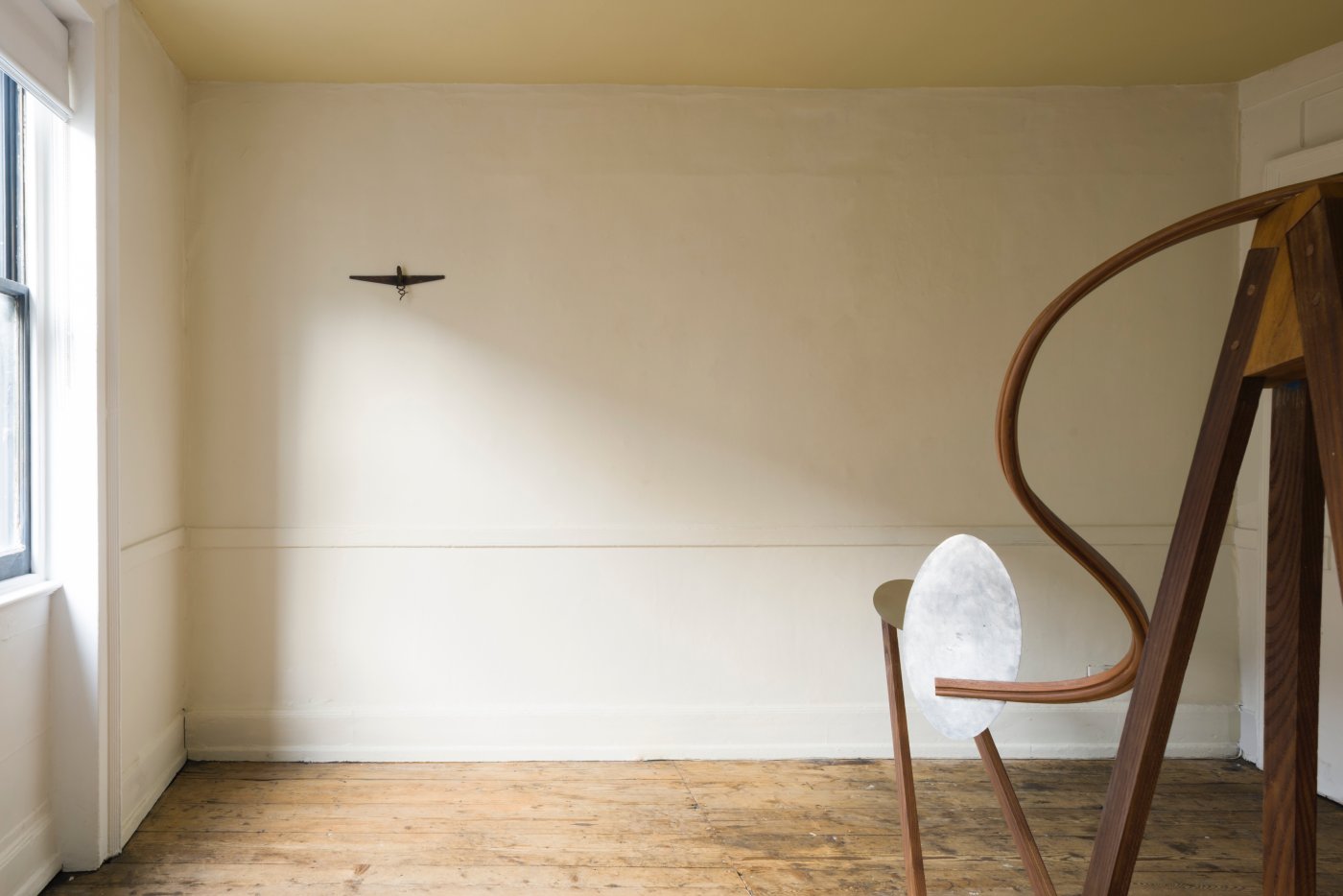 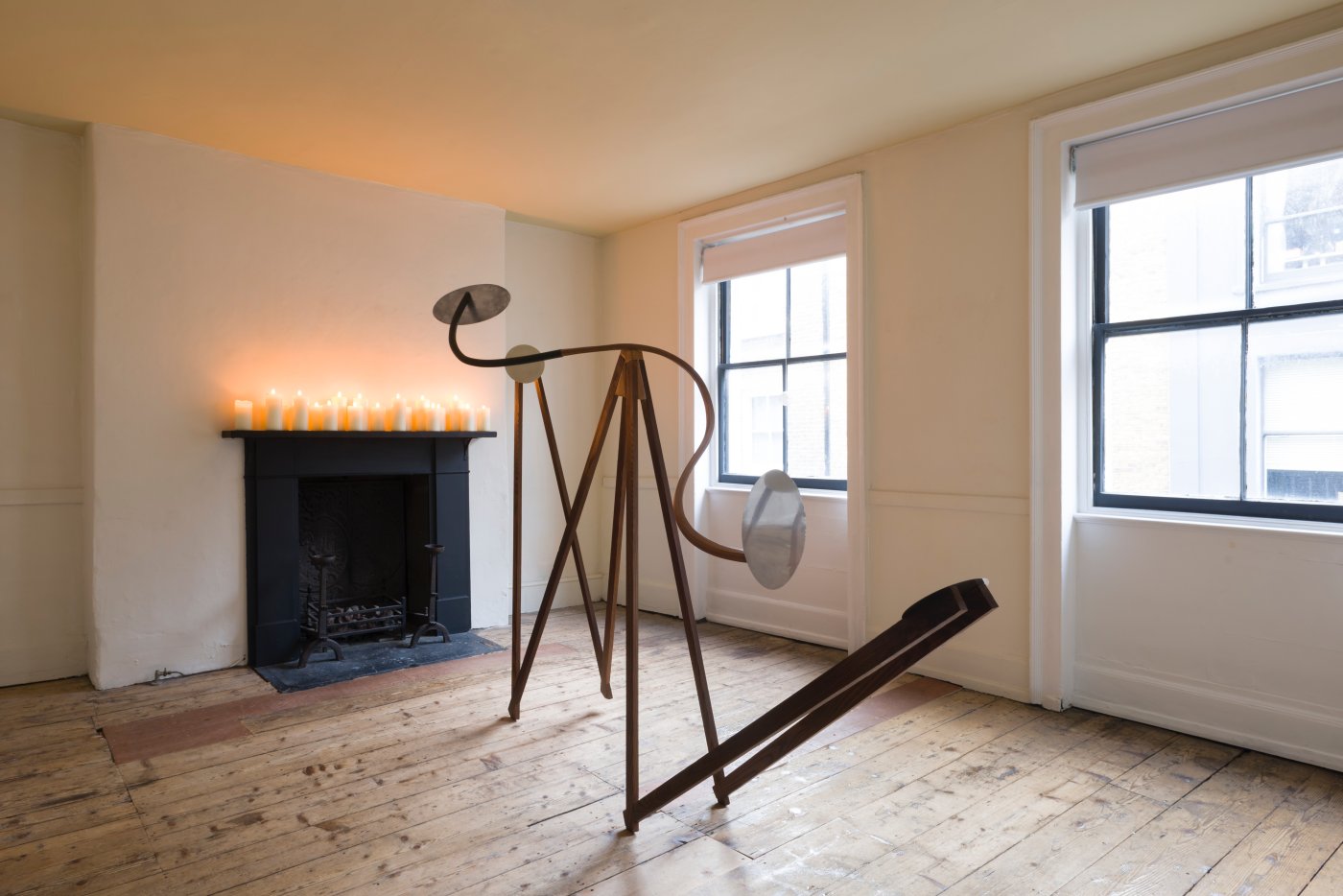 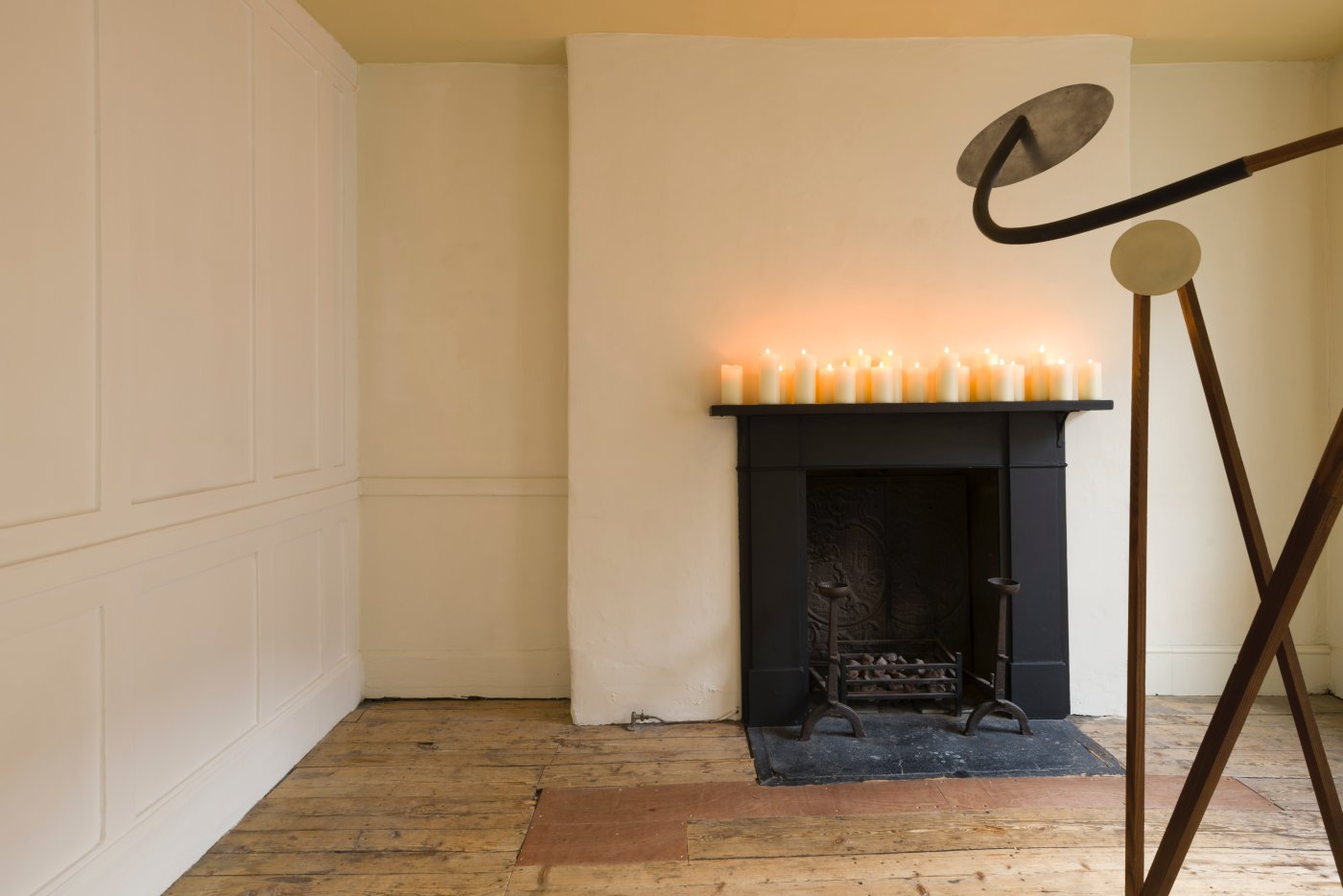 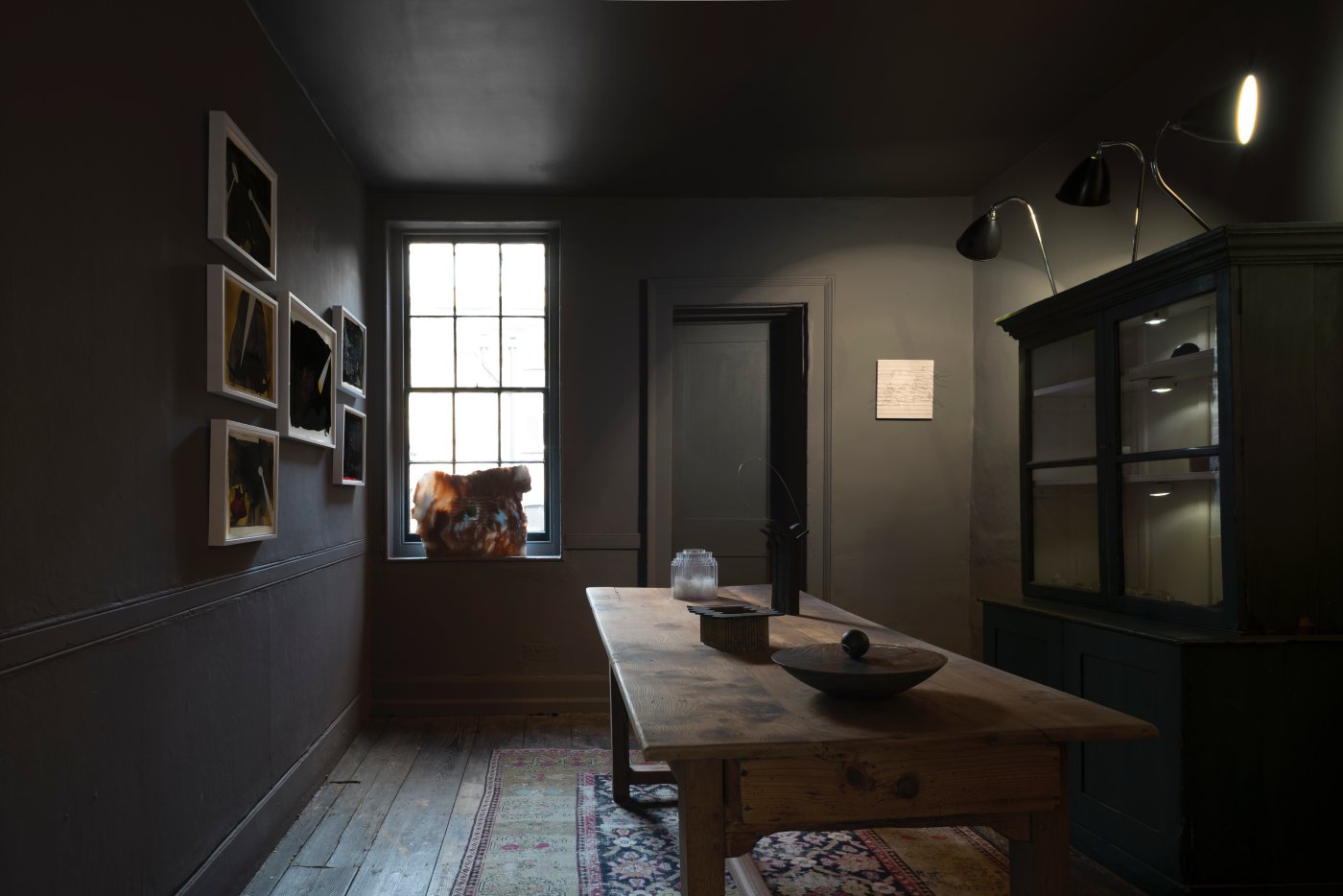 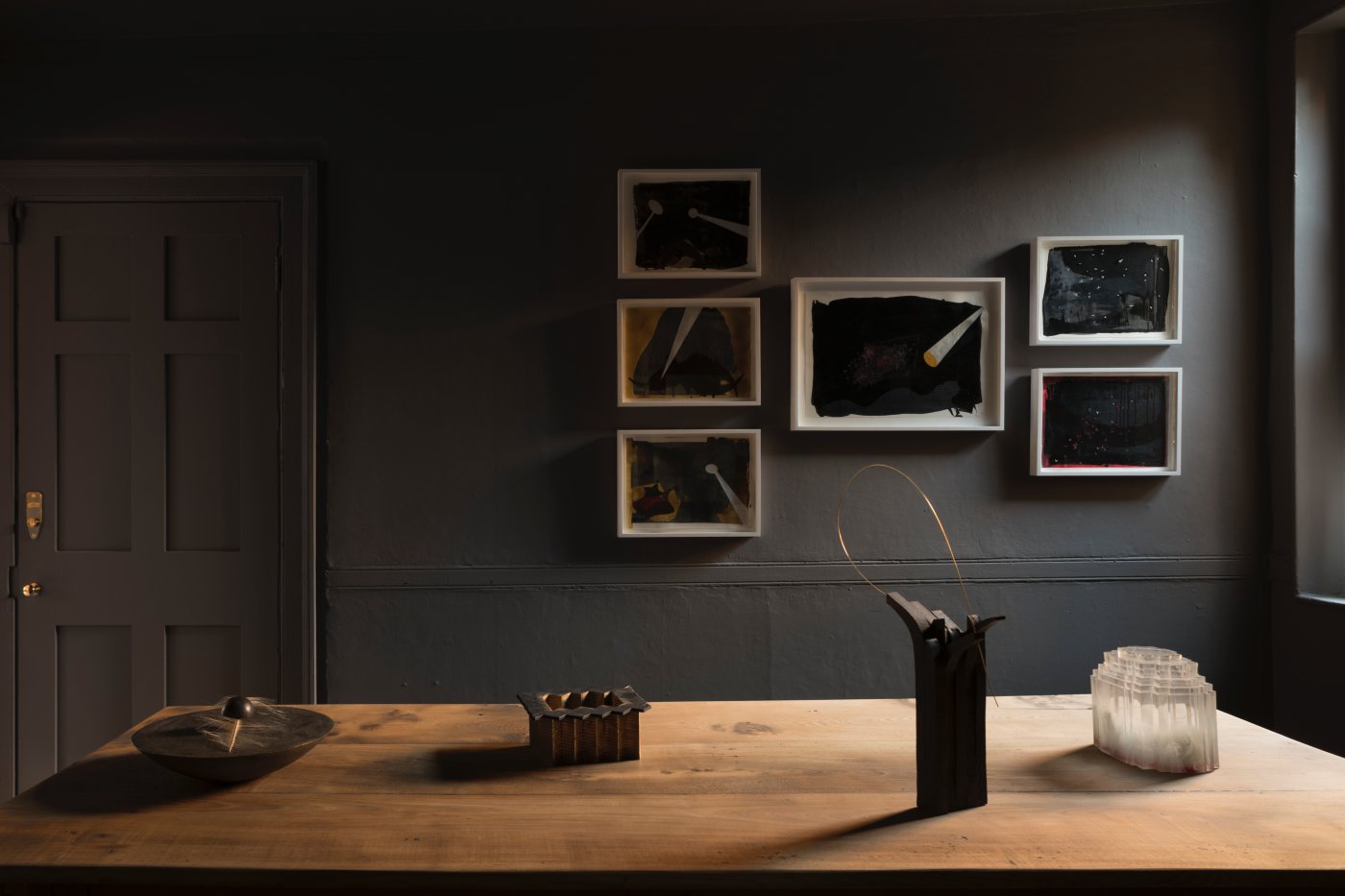 Renowned for her innovative approach to material, the works exhibited range from Mesmer, its wooden parts held together by magnets, to smaller sculptures made of alabaster, bronze, fibreglass, silver wire and brass. Many of the works in Mesmer, Again were made by Wilding in 2020 and are exhibited here for the first time. This includes new series of drawings, dark in mood, made of black rubber paint, scraped and poured over sheets of paper and collaged.

Mesmer, Again runs in Room 2, Karsten Schubert London’s gallery in a former apartment in a mid-18th-century Soho townhouse. For Wilding, this is an appealing location to show her works as it offers a view of what it is like to live with sculpture. As she says about her piece Drone 3 placed in the gallery’s window, ‘the north light coming through the window reveals something new about the sculpture, encouraging the viewer to approach the work quite differently compared with being in a white cube space, which is a showroom, not a living room.’

Mesmer, Again is accompanied by a catalogue featuring an interview with Alison Wilding by Tom Morton.

Alison Wilding (b. 1948) is one of the UK’s foremost sculptors and has been represented by Karsten Schubert London since 1987. Having studied at Nottingham College of Art, Nottingham; Ravensbourne College of Art and Design, Bromley; and the Royal College of Art, London, Wilding came into prominence in the 1980s as one of a group of sculptors including Richard Deacon and Antony Gormley. Her first major solo exhibition was held at the Serpentine Gallery, London, in 1985.
Recent solo exhibitions include the De la Warr Pavilion, Bexhill; Leeds Art Gallery and Whitworth Art Gallery, Manchester. Her work can be found in the public collections of the Tate, British Museum, Victoria & Albert Museum, Henry Moore Institute and many more. She was twice nominated for the Turner Prize (1988 and 1992). Recent public commissions include Still Water, a memorial to UK citizens affected by terrorism overseas (2018). Currently she is Eranda Professor of Drawing at Royal Academy Schools and was made OBE in 2019.