Return to Mother is an exhibition of new works by Tehran-born, US-based painter Ali Banisadr. Blending abstract gestures and delicate figurative details, the nine paintings on view will provide a kaleidoscopic vision of human history, inviting viewers to reflect on contemporary issues through the lens of the past, and to absorb the epistemic power of images. 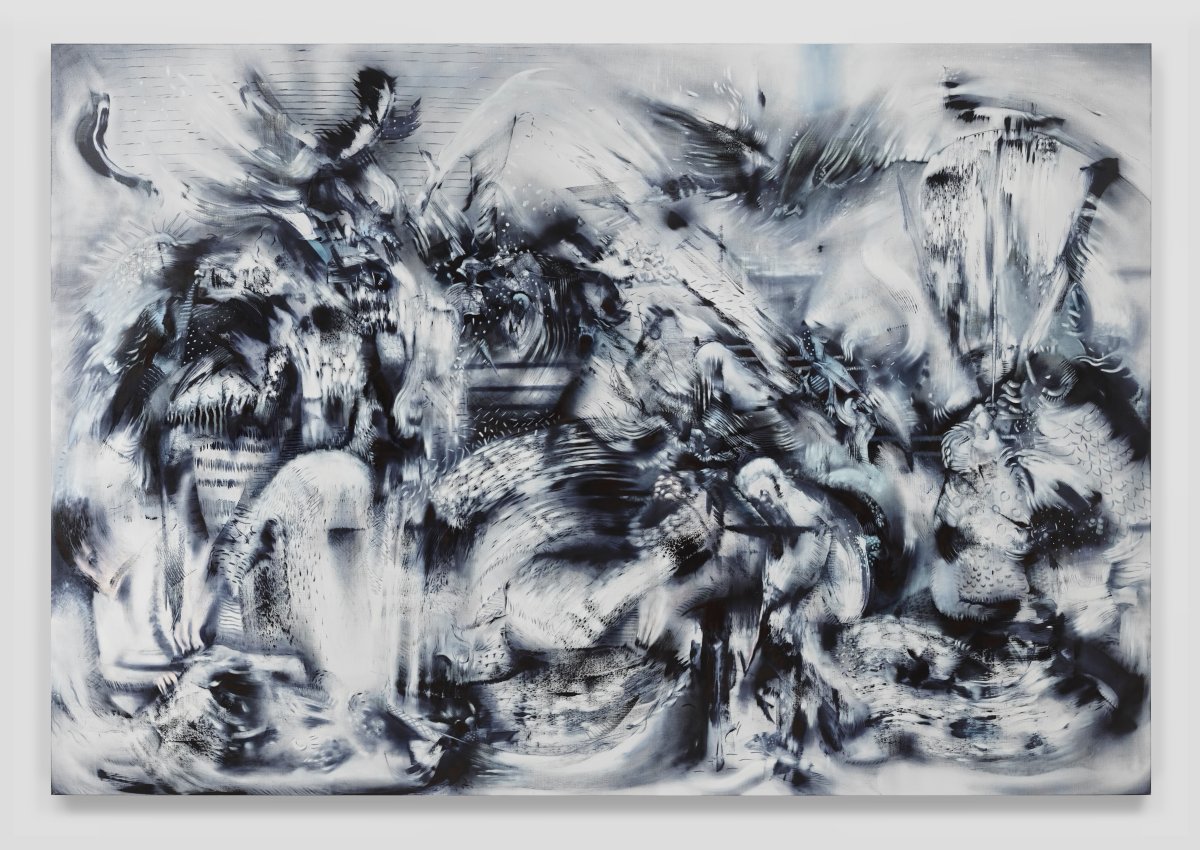 Ali Banisadr
Axe to the frozen sea within us, 2021 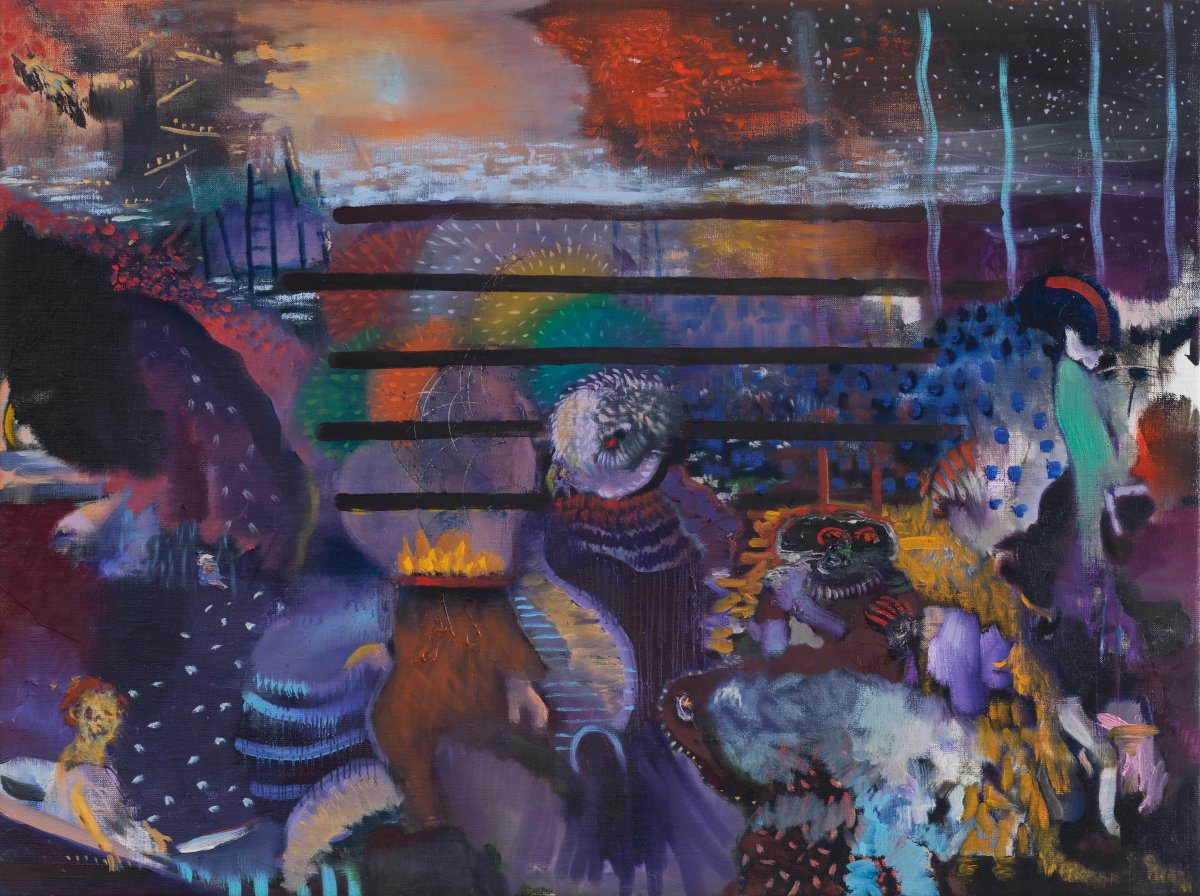 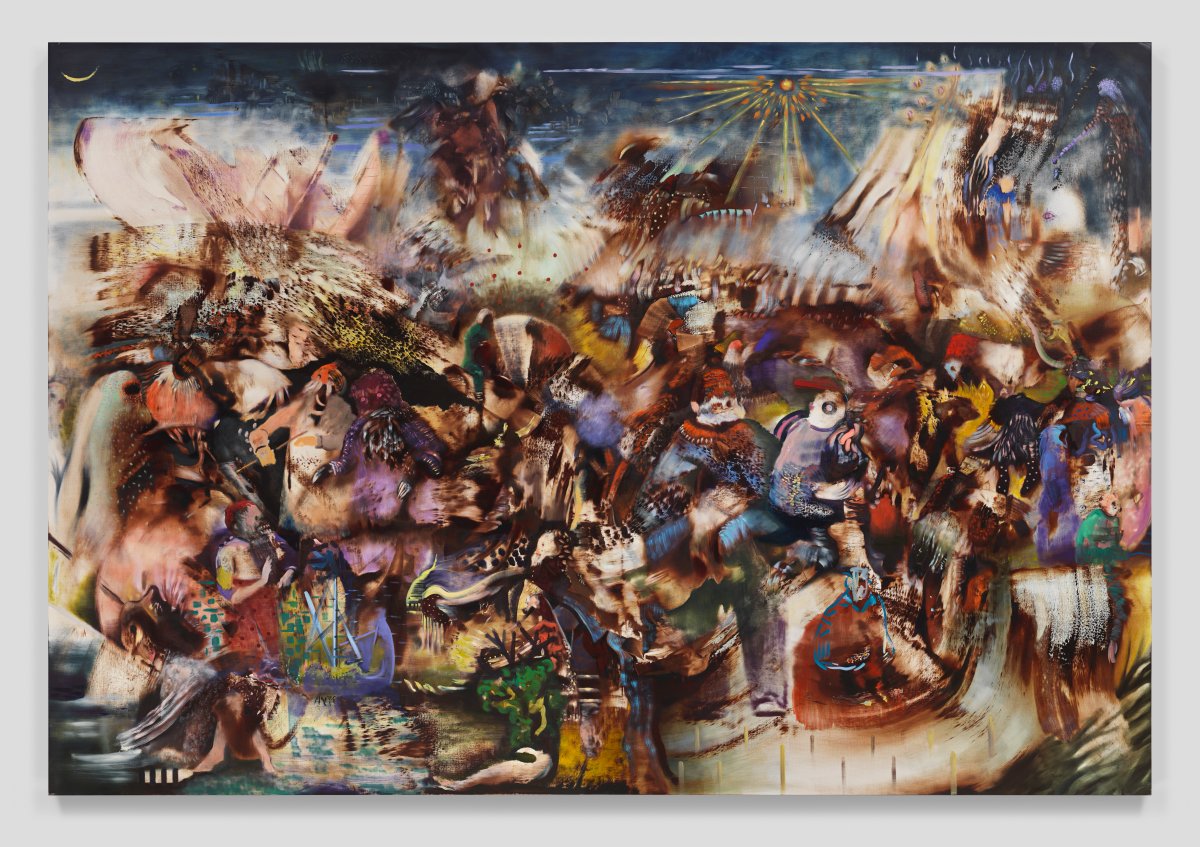 Ali Banisadr
Pyramids of the Sun and the Moon, 2022 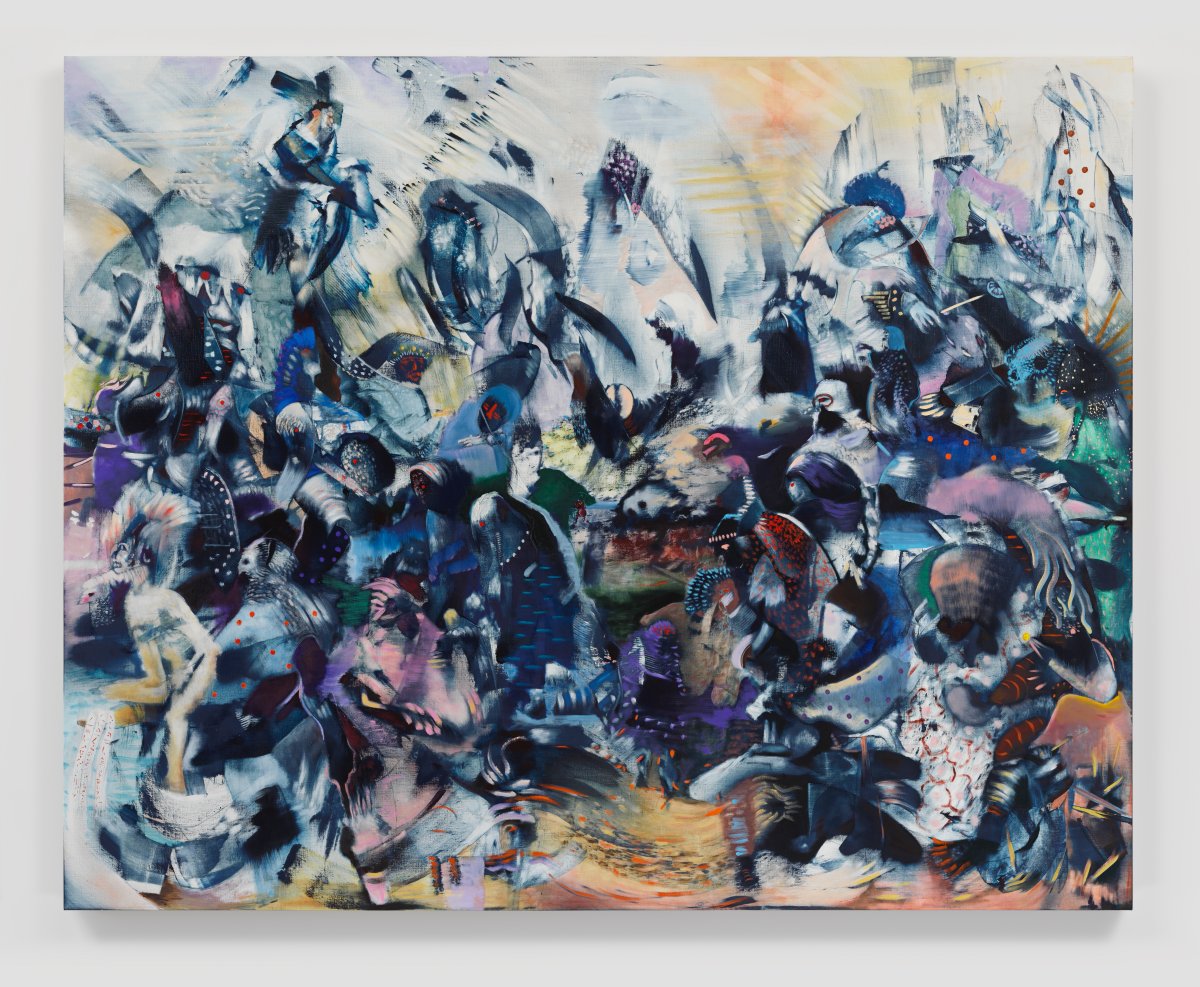 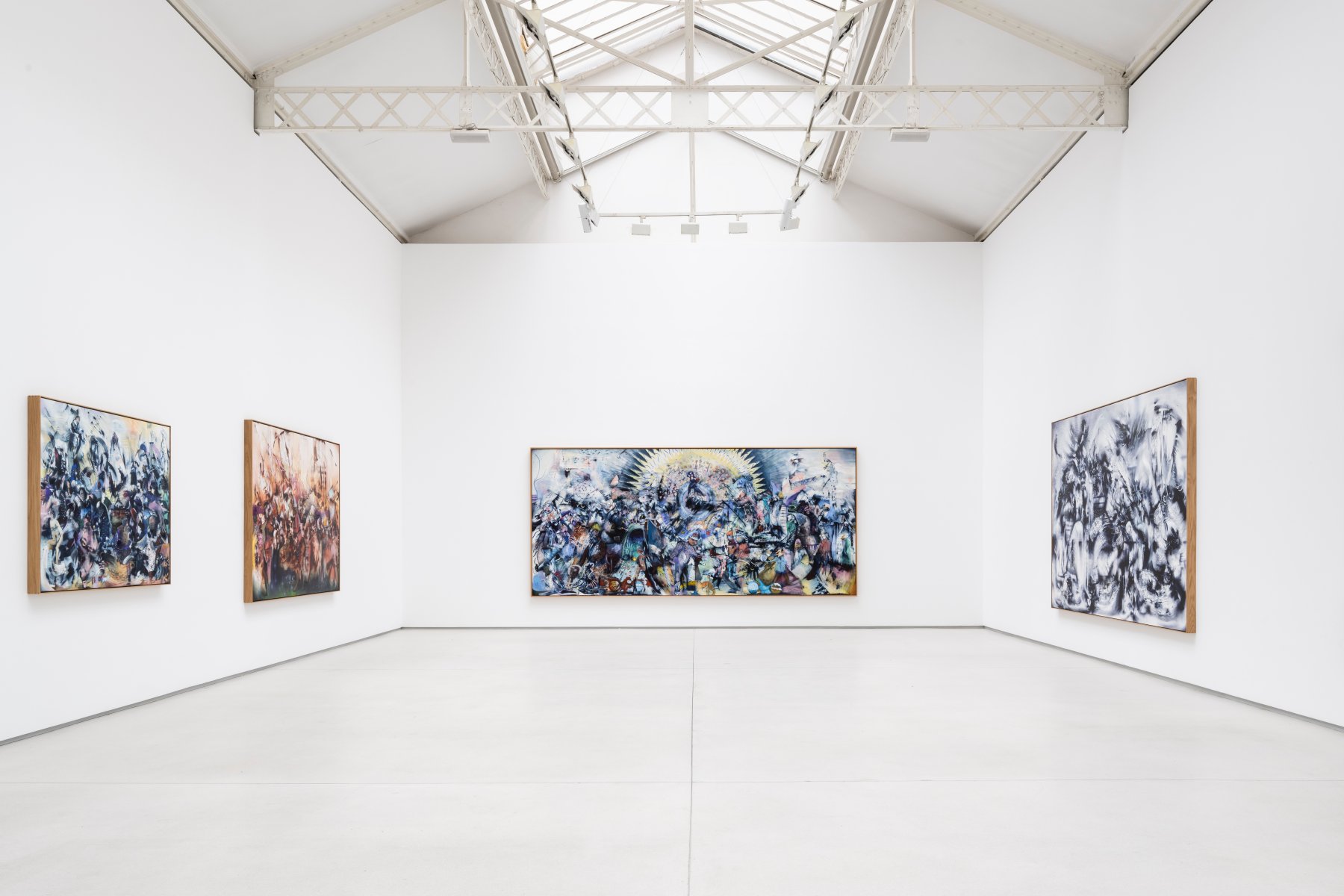 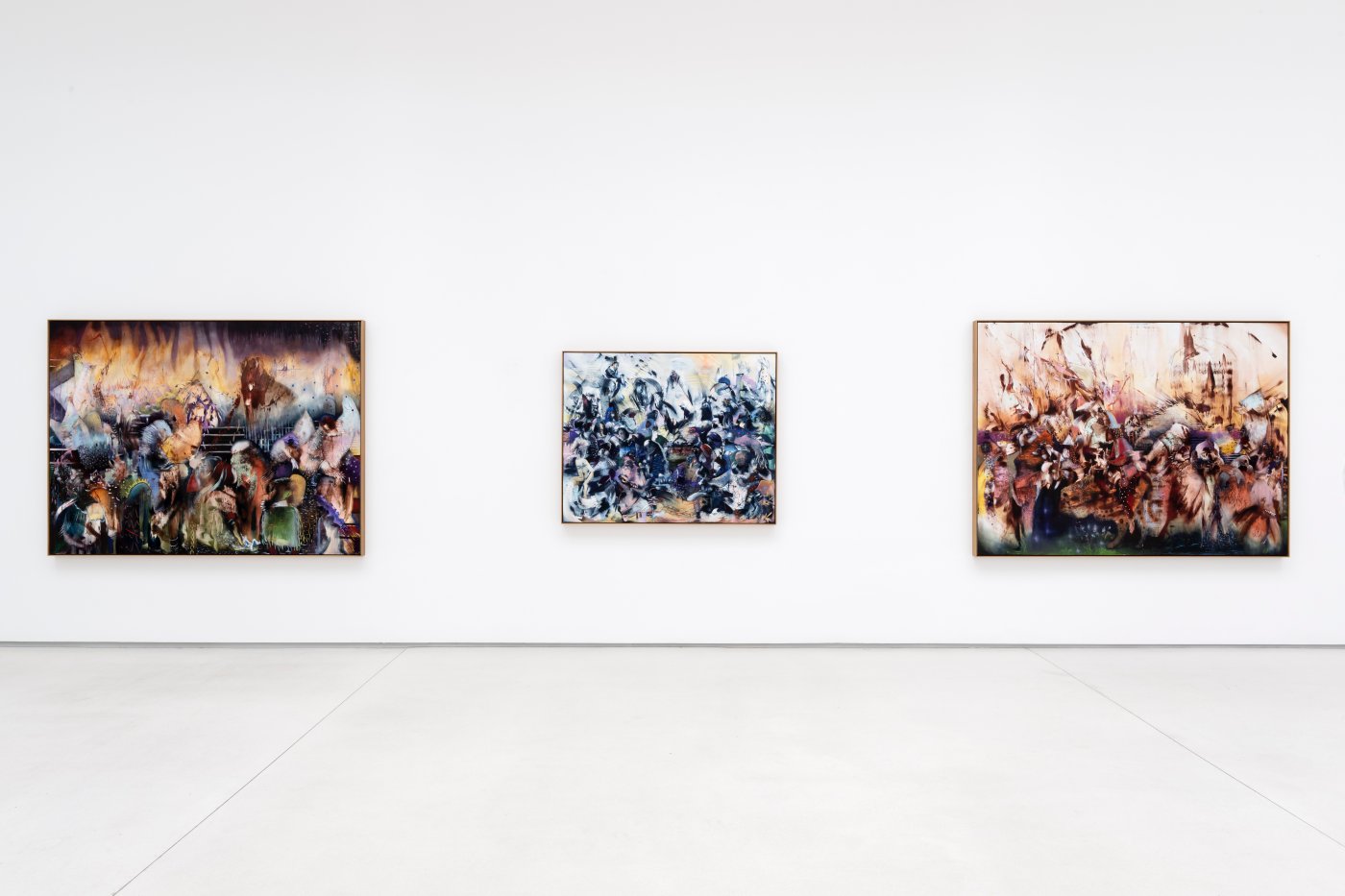 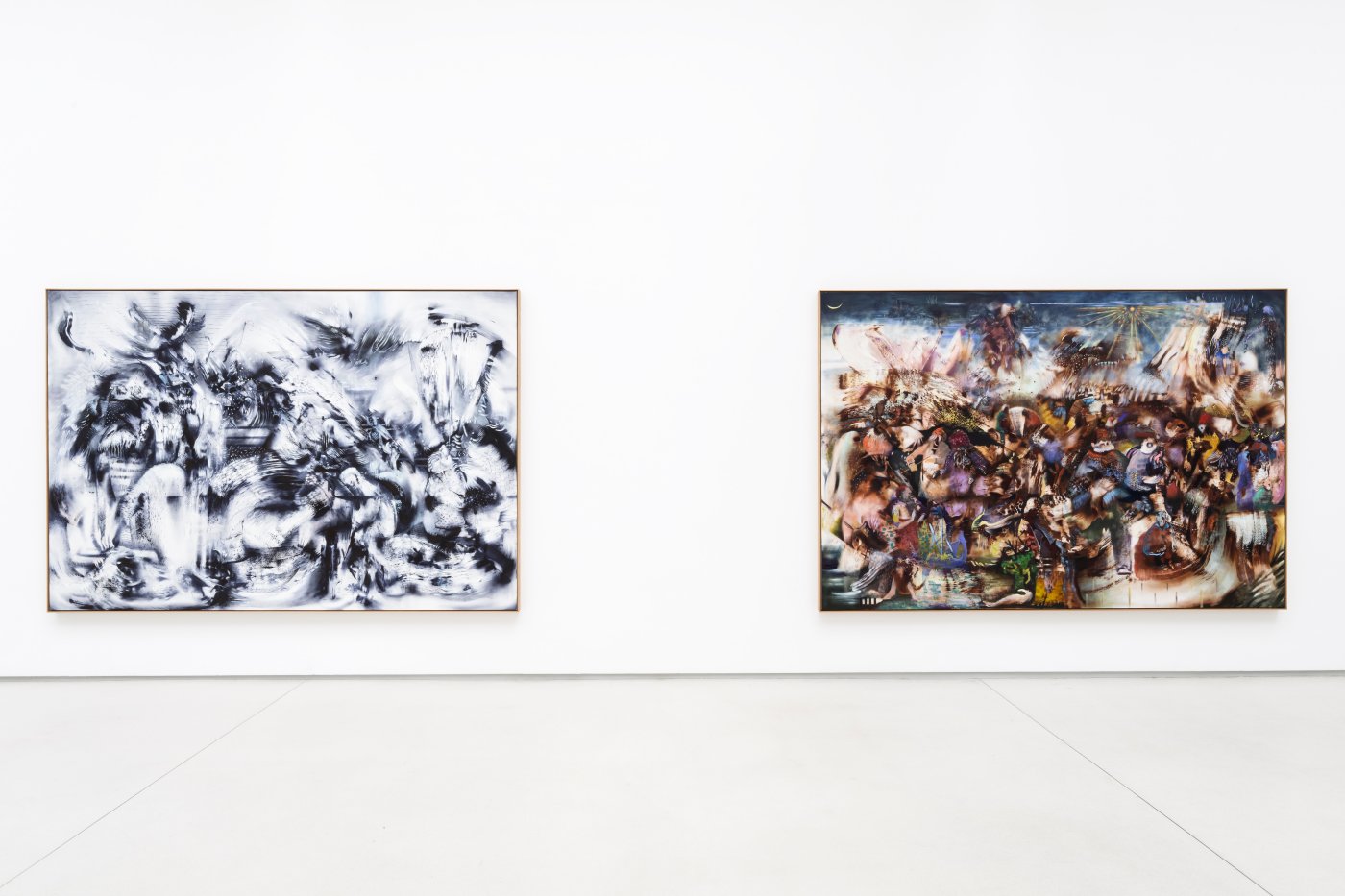 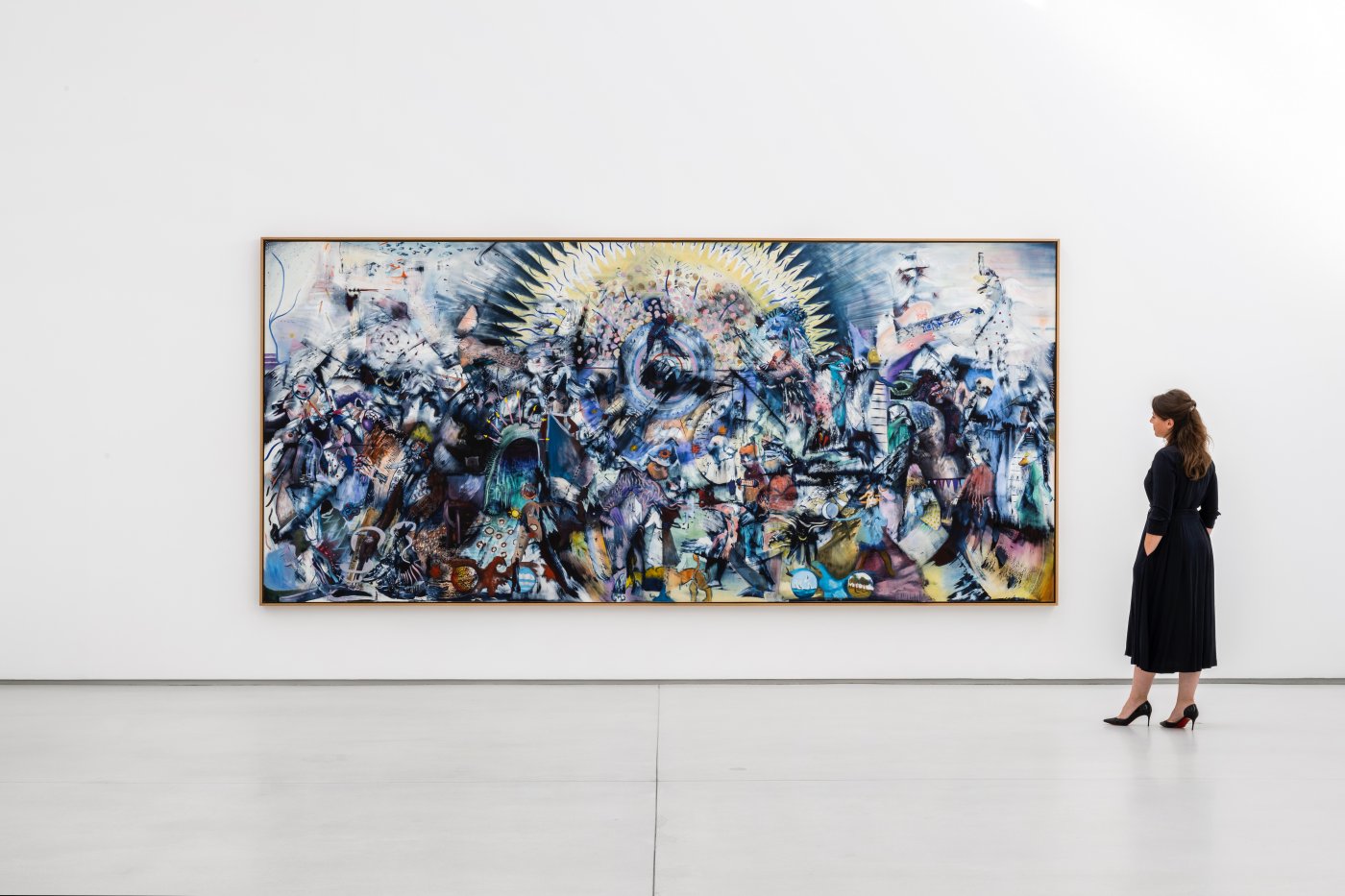 The exhibition’s title is a literal translation of a Sumerian word, pronounced ‘ama-gi’, thought to be the earliest written reference to the concept of freedom. ‘Freedom is the thing I am after when I am painting,’ explains Banisadr of his choice. ‘There is no master plan, there are no borders. I don’t have to answer to anyone.’ Although theorists have been at pains to explain the link between the notion of freedom and its metaphorical origin, Banisadr’s paintings seem to wordlessly make sense of the association. ‘Freedom is the ability to move through time,’ he explains, ‘to enter different head spaces, different art histories, different cultures, to dissolve boundaries. There is no blueprint – it goes where it wants.’

Banisadr describes his paintings as portals onto different worlds in which reality, history and mythology coalesce as though through an alchemical process. Drawing on a wealth of literary and art-historical references, as well as current events and his own lived experience, he creates moving tableaux populated by colourful apparitions that might be found in Dante’s Inferno, or on a distant planet. ‘I try to let the painting become what it wants to become,’ explains Banisadr of his process. ‘And when that happens, when something happens in the painting that I didn’t know before, that’s the exciting part, because then the painting is telling me something that I didn’t know.’

Among the books covering the tables of the artist’s New York studio, several reference ancient Egyptian and Near-Eastern mythology or alchemical etchings, and another features one of Francis Bacon’s Pope paintings on its cover. Emerging from the collection of disparate fragments is his fascination with hybrid creatures, which manifests on the canvas in the form of mysterious and at times unnerving silhouettes, reminiscent of Hieronymus Bosch’s famous bestiaries. At the same time, one can recognise the influence of Persian miniatures in the precise patterns of stripes and dots that punctuate Banisadr’s paintings. They become a point of focus for viewers, giving the eye a place to rest among the blurred patches and swirls of paint, allowing it to penetrate further into the fabric of the work.

Paintings such as The Great Replacement (2022) reveal how Banisadr weaves together the past and present, highlighting the connections between human actions and ideas across time and space. Referencing and challenging the racist conspiracy theory that continues to fuel anxieties among Western societies since its formulation in 2011, the artist invites us to look back through history and question our assumptions. A naked man painted in shades of yellow in contrast to the surrounding crowd seems to be being pushed out of the frame, while above him, a rider bears down on the scene, armed with a shadowy cross. ‘Who is replacing whom?’ asks Banisadr in this painting, ‘what does history say about Napoleon, the Inquisition, wars waged on the back of religion?’

One of the largest works on view, Axe to the frozen sea within us (2021), references novelist Franz Kafka’s mantra that we should read books that ‘affect us like a disaster, that grieve us deeply, like the death of someone we loved more than ourselves.’ Banisadr sees painting in a similar light, wanting his own works to provoke viewers into thinking differently. ‘The ice melts and we find the thing that has been frozen for ages,’ he says. ‘This new discovery changes history and the ever-changing past continues forward.’ Reminiscent of the alchemical etchings that can be found across the artist’s studio, the monochrome palette of the work also pays homage to a discipline which has long fascinated the artist. These ancient documents display a desire to conceptualise visually the forces that underpin our world, echoing Banisadr’s desire to ‘make the invisible forces visible’ in his paintings. As he writes, ‘In alchemy, universal truth, the essence of everything, comes from everything.’