“A small island of reality … sometime before the creation of the universe.” 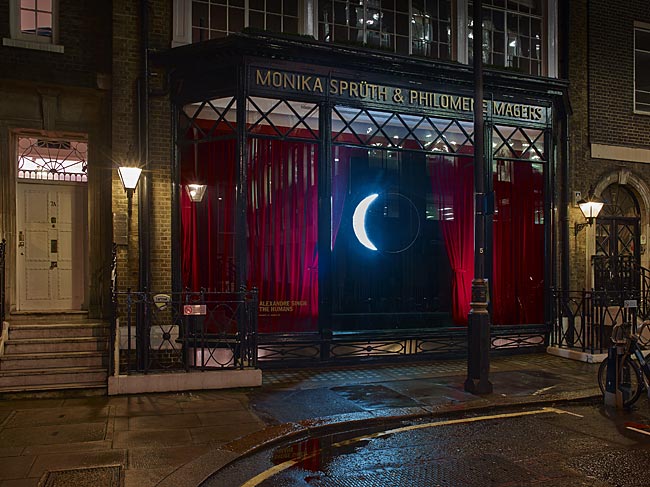 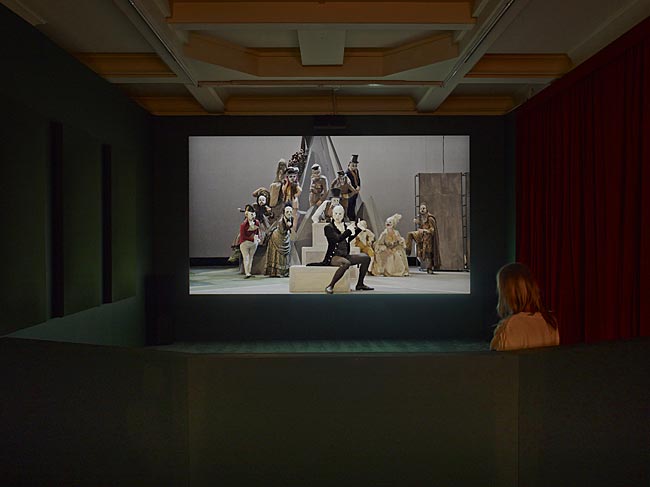 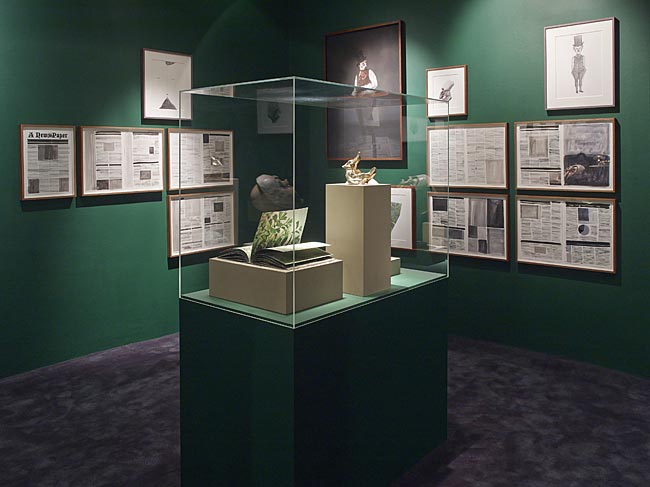 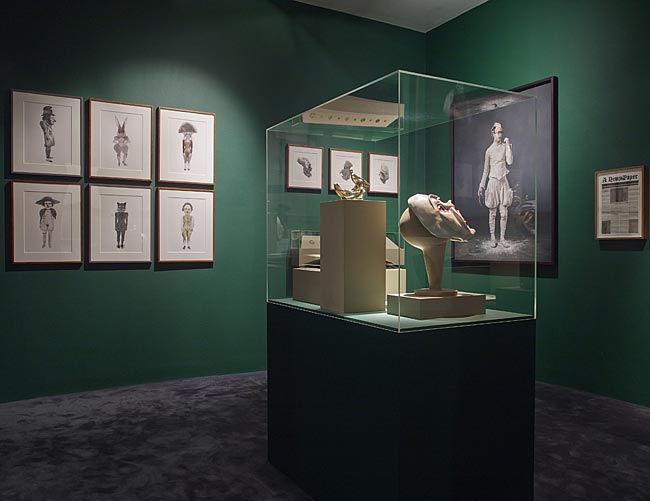 Alexandre Singh’s The Humans is a visionary world dominated by two contrasting figures: Charles Ray, an austere sculptor fond of long monologues, and a silent but agile Rabbit Queen. Conceived as both a three-act comedy and an extended body of work, the play The Humans premiered in September 2013 at Witte de With, Rotterdam and was subsequently performed at the Brooklyn Academy of Music as part of Performa 2013. The exhibition at Sprüth Magers in London comes in the wake of those two performances, and represents the culmination of years of planning and execution by the artist.

Singh transforms the gallery into a stage, with the black frames of its large shop-front windows its proscenium arch. Within the crimson curtains that conceal the gallery, a full-length performance of the play, shot in Rotterdam, will be projected in a small, theatre-like space. The drama of The Humans unfolds amid an allegorical landscape, where a mountain rises centre stage, between the pristine studio of the sculptor Charles Ray and the outhouse headquarters of the Rabbit Queen. In the studio, Charles Ray has sculpted some human figures to classical perfection, and this group becomes the play’s chorus. Charles Ray interrupts his work from time to time to lecture Tophole, his fretful son, who is the companion to the witty and confident Pantalingua, human daughter of the Rabbit Queen. Together, Tophole and Pantalingua plot to contaminate Charles Ray’s creations, transforming their cold stone into the soft, lustful flesh of the humans.

Yet more characters enliven the drama. The mysterious, seemingly invisible Vox Dei, a figure of fear, authority and possibly revelation, might be God himself, or just an indifferent black cat. What is the significance of the air conditioner called Creates Heat and Cold, hovering above the mountain like some kind of low-brow, high-tech Zeus? Or the coffee machine in whose dregs the fate of the humans might be read? Transformed, the humans start to enjoy their appetites and imperfections, introducing dance, anarchy and song into the otherworldly realm. Will the machinations of Tophole and Pantalingua corrupt humanity forever? Can Charles Ray maintain control of his creations? Will Vox Dei speak to give the revelation they seek, or will the humans be forced to define their own fractured truth?

The rest of the exhibition treats the gallery as if it were a museum devoted to the universe of objects and characters depicted in The Humans. Singh conceived every last detail in the play, from the characters’ masks to the coins they use as currency. In the room adjacent to the theatre-like space, a range of works will be displayed, including costume designs, watercolors of masks, and drawings that acted as newspapers for the production. ‘Guises’, small masks worn by Tophole and Pantalingua, will be cast in brass and displayed in a vitrine. Key figures will be depicted in large-scale photographic portraits. The photographs, with the characters posing in costume in a formal setting, bring to mind a mix of Renaissance portraiture and Hollywood pin ups. All of the ideas and characters that bring the story of The Humans to life emerge as objects that have their own particular resonance as artworks.

The Humans presents a parallel world where an age-old conflict at the heart of Western culture takes place. On one side, the Rabbit Queen is all flesh and Dionysian energy, while on the other the Apollonian sculptor attempts to achieve perfection of form through his art. Pantalingua and Tophole navigate and interpret these two positions for the viewer. Singh animates their journey by dipping deeply into the history of art and literature, reinforcing his vision with a strong dose of bawdy puns and petty quarrels. Aristophanes, Shakespeare, Woody Allen, Otto Dix, Oscar Wilde, Rabelais and Daumier all make their presence felt, and Singh fuses these figures into a comedy about the complex cultural legacy inherited by any artist today. The Humans is on one level a story about creation itself, the struggle of the artist to come to grips with his predecessors and master his own material.